Never before has a new cartridge been met with as much hostility and outright anger as has the 30 Super Carry. A quick search through online gun forums or the comment sections of various articles reveals some pretty harsh words towards Federal Ammunition owner Vista Outdoor. Few comments are based on actual performance because most haven’t shot it — though that doesn’t stop some from offering their “expert” opinion.

Like every other new product launched, there’s a handful of commenters who think they’re original by stating the most overused comment in gun forums, “It’s the answer to a question that no one asked.” But most hostility and anger is summed up by comments like, “Vista struggles to put ammo on the shelves, and when they do, prices are through the roof; yet instead of investing in more production capacity, they spend their money developing new rounds like the 30 Super Carry.”

Ouch. Not that there isn’t some validity to that sentiment, but I prefer to evaluate the cartridge, not the politics of the day. Personally, I like seeing new cartridges being developed and hitting the market. It’s what drives innovation, and I applaud Vista for that.

One point that I think many are missing in this discussion is that the 30 Super Carry is the first handgun cartridge in the modern era designed from the ground up specifically for civilian concealed carry, not military or police use. Why is this even relevant? Because this means it was intended to be used with modern expanding bullets. Every other cartridge was designed around bullets that are solid, non-expanding: FMJ, ball, etc. So, at its very core, this cartridge was designed to maximize bullet expansion while still penetrating deep.

It’s a great point. Vista’s 30 Super Carry marketing has focused primarily on micro-compacts, in which the capacity is increased from 10 to 13, but not much is said that in full-size handguns the capacity is increased from 17 to 20. Tarr argues, as many do, that the higher the capacity the better. I agree with that to an extent but would quantify that with “usually” better. It’s true that attackers often travel in groups, so more is better; however, time is also a factor and there are situations where you might only have time to make one shot — specifically, when attackers aren’t the two-legged variety.

I have a cabin in bear country, and I have recorded 13 different bears on my property. A black bear can close about 44 feet in one second. It takes the average person around 2 seconds to draw their handgun. (There’s a difference between standing at a line prepared to draw, waiting for a timer to beep and walking through the woods and surprise jumping a bear, then rummaging through layers of cloths and gear to get your handgun). You do the math. You might have time for only one shot. Which is why, in bear country, I carry a 10mm.

Still, there’s a stark difference in terminal performance between a 10mm and a 9mm. There’s not nearly the difference between the 9mm and the 30 SC. In fact, according to what Federal Ammunition has published, they’re pretty close. In some criteria, one could argue that the 30 SC outperforms the 9mm, such as in increased penetration.

I mentioned in the opening that the opinions of some online “experts” is the tired — very, very tired — phrase, “it’s an answer to a question that no one asked.” I know this is a phrase that, when used, makes people feel clever, and so they insert it when discussing any new idea that they don’t like. But in this instance, it’s very much not true. People have asked for something more than a .380 but less than a 9mm. I can’t tell you how many discussions I’ve had with people who prefer a “mouse gun” but want something more than a .380 ACP. (Hence the aftermarket GLOCK G42 barrel chambered in 9×18 Makarov. I have one. I call it my GLOCK-arov). I believe once the cost of 30 SC ammo comes down and more guns are chambered in it, those people will be thrilled with the 30 SC.

Performance testing was done with a Smith & Wesson Shield Plus, which has a 3.1-inch barrel. Accuracy testing was done at 10 yards, firing five 5-shot groups. I tested three different loads — Federal American Eagle 100-grain FMJ, Federal Premium 100-grain HST, and Remington 100-grain FMJ. The average groups were 2.19, 1.78, and 2.23 inches, respectively. The best groups from each were 1.33, 1.21, and 1.62 inches, respectively. The Shield really seemed to like the HST, which is an outstanding self-defense round.

The test of terminal ballistics was rudimentary and non-scientific, and I don’t have enough experience in terminal ballistics to claim otherwise. A Clear Ballistics brand 6x6x16-inch 10-percent gel FBI Block was used. The ammo tested was the Federal Premium HST 100-grain. Round one of testing did not go as planned. I fired multiple shots into the gel block, and all bullets passed clean through the 16-inch media.

I want to reiterate that the gel block that I used was Clear Ballistics, not a true FBI gel block, which has differences in penetration.

The four Vista brands — Federal, Speer, CCI (Blazer), and Remington — all have various loads available for a total of six loads, including two excellent self-defense loads in the Federal HST 100-grain and Speer Gold-Dot 115-grain. Hornady also makes a Critical Defense load utilizing a 100-grain FTX bullet. I give a lot of credit to Hornady for supporting new calibers early.

For reloaders, Lee Precision makes a 4-piece die set, and RCBS makes a 3-piece die set. Hodgdon Powder has reloading data for the 30 Super Carry on their website.

DITCHING THE 9MM FOR THE 30 SUPER CARRY?

This is what it gets down to: should you trade in your 9mm for the 30 Super Carry? First, I can’t speak for anyone but me. Telling someone else what gun they should carry is like telling them they should buy a sports car when what they need is a 4×4 truck. Second, I never ditch/trade/sell any of my guns, I just accumulate more.

I’d also like to see multiple size categories of guns chambered in it. My primary carry gun is compact-size as compared to the sub-compact Shield, and I’d rather stick to the compact for better control.

But the question itself isn’t the right question to ask. The question to ask is, “would I add the 30 SC to my stable of choices?” And to this question, I would answer, “yes.” There’s no rule that you can only own one handgun caliber, despite a common statement online, “I would never trade in my 9mm for 30 Super Carry.” But who says you have to? I use 9mm as my primary caliber of choice. During the winter, when everyone has thick down parkas, I carry a handgun chambered in .357 SIG. In bear country, I carry 10mm.

If there’s one thing recent years have shown, it is that it is best to own several calibers. Everyone used to say, “I’ll stick to the calibers used by the military and police, such as the 9mm, because it will always be plentiful.” Ha! During recent ammo shortages, the most used calibers were the first to disappear from shelves, which urged on the crowd that said, “I’m glad that I stick to niche calibers, because the common calibers have all disappeared.” Ha! That lasted about a month, then all of those calibers disappeared from shelves. The solution, have a handgun for each caliber.

DOWNSIDES TO THE 30 SUPER CARRY

Another downside is the limited options for carry guns. Right now, there are only two: Nighthawk Custom and Smith & Wesson. The Nighthawk Custom makes a great 1911 but is priced out of most people’s budgets. The Smith & Wesson Shield Plus is a very solid performer and is popular, yet gun people tend to be a little territorial about their choice in carry guns and typically are loyal to one particular brand. Someone who is a fan of Brand X isn’t necessarily going to up and choose Brand Y just because Brand Y has a new caliber. As time passes, more gun makers should jump on board.

The most prohibitive factor for most people is the cost of ammo. I can’t envision a time when that will change. There will never be cheap surplus 30 SC ammo on the market because it’s not used by the military or police and it isn’t intended for that. Plus, there will never be a large supply of it to drive down costs. There are factories set up to produce nothing but 9mm ammo. It’s the first handgun cartridge new ammo companies make, and the first caliber established companies release when they introduce a new load. The military uses it, most police departments use it, most government agencies use it, and almost the entire rest of the free world uses it. The 30 SC will never be as cheap to shoot as the 9mm, which makes it expensive to train with. 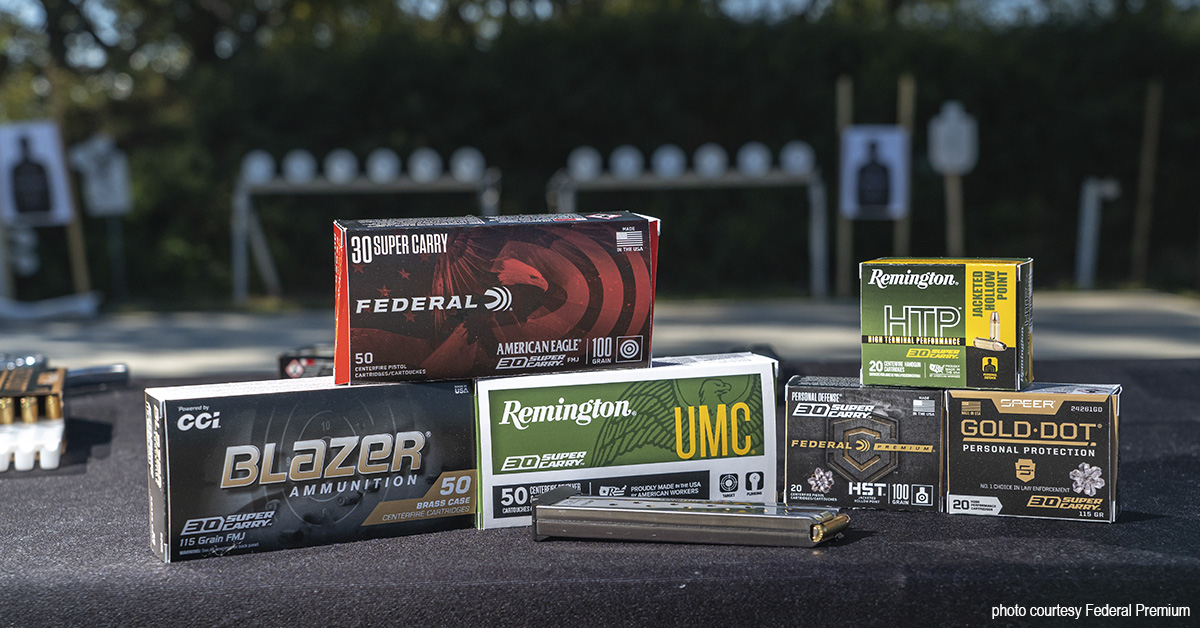 I’m generally slow to jump on any bandwagon and prefer to let time and experience prove something good or bad. As an example, I had just started to warm up to the .40 S&W…about a year before it started to die out. It’s too early to tell too much about the 30 SC, good or bad. It looks like it has some serious potential, but I need to see more real-world data and results. I’m very open to the idea of the cartridge, and hope it succeeds. With that said, I’m not ready to ditch my 9mm for the 30 Super Carry just yet. Would I add it as a backup to my 9mm handgun? Yes. Would I recommend it for a first-time gun buyer who wants it for self-defense? No, because ammo is not affordable enough to buy it in the quantities needed to train and become proficient with it.

30 Super Carry Performance Data (fired from a S&W Shield Plus with a 3.1-inch barrel)

Accuracy is in inches and consists of five 5-shot groups, fired from a rest at 10 yards. Velocity is an average of five shots measured in Feet Per Second (FPS). E.S. is Extreme Spread. S.D. is Standard Deviation.

(NOTE: See our full review of the M&P Shield Plus.)

I tested and reviewed the Shield when it first debuted but have only fired it a couple of times since. The trigger on the Shield Plus that I used for the 30 Super Carry testing has come a long way since the samples that I fired. 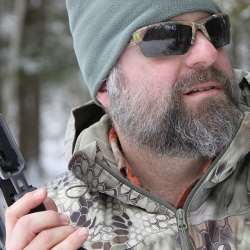 Robb Manning
Robb Manning grew up in rural Wisconsin. Upon graduating high school, he enlisted in the U.S. Marine Corps, where he served for nearly 11 years and developed an affection for anything that goes BOOM when a trigger is pulled. He has been a freelance gun writer since 2010, writing for numerous magazines. He has written three books: Glock Reference Guide, Gun Digest Book of CZ Firearms, Glock Reference Guide, 2nd Ed., and co-authored Shooter’s Bible Guide to the AR15, 2nd Ed. He took the helm as Editor of Gun World magazine in May 2016 until the magazine was closed in November, 2018. He has a YouTube channel called “762x51n8o”.

Kel-Tec thinks outside of the box with this .22 rimfire pistol with a 33 round magazine ca…