A civilian variant of a classic American battle rifle covers all the bases for a personal defense, hunting, and an ultra-fun range gun

We are all intimately familiar with the saying, “They don’t make them like they used to.” Pick any consumer good and that observation likely rings true. I’m of the opinion that so much of what passes for consumer products today is absolute junk, made of second- or third-rate materials and seemingly designed to fail in short order so you must buy a replacement.

Thankfully, the firearms industry doesn’t suffer that degree of planned obsolescence. We are a tough crowd to please, and manufacturers in our space know they better hit the quality mark or else.

At Springfield Armory, not only does the company deliver quality products, they actually do “make them like they used to.” At least they do when it comes to their M1A series rifles.

For those readers who are new to the firearms world or who don’t track firearms history, the M1A is the civilian variant of the classic M14 select-fire battle rifle adopted by the U.S. Army and Marine Corps in the late 1950s as a replacement for the legendary M1 Garand. Bearing a striking resemblance to the M1 Garand, the M14 developed and produced by Massachusetts-based Springfield Armory (along with H&R and Winchester) saw limited action in the Vietnam conflict before its displacement by the M16 (the debut progeny of the Armalite AR-15).

During its short service life, though, the M14 won many fans, and even more once Springfield Armory of Geneseo, Illinois, introduced a civilian version in 1974. Dubbed the M1A, this rifle maintained the steel-and-hardwood ruggedness and reliability of the original but in a semi-auto action.

Since then, Springfield has rolled out several iterations of this classic, including the M1A Scout Squad. With its 18-inch barrel, the M1A Scout Squad is four inches shorter than Springfield’s M1A Standard Issue model, making it more maneuverable in the field while delivering 10-rounds of 7.62x51mm (.308 WIN) firepower.

If you’re a fan of old-school manufacturing quality, design, and never-fail performance, the M1A Scout Squad is your ticket. Think of this as a heavy-hitting musclecar of old compared to the soy-sipping cutesy cars of today. 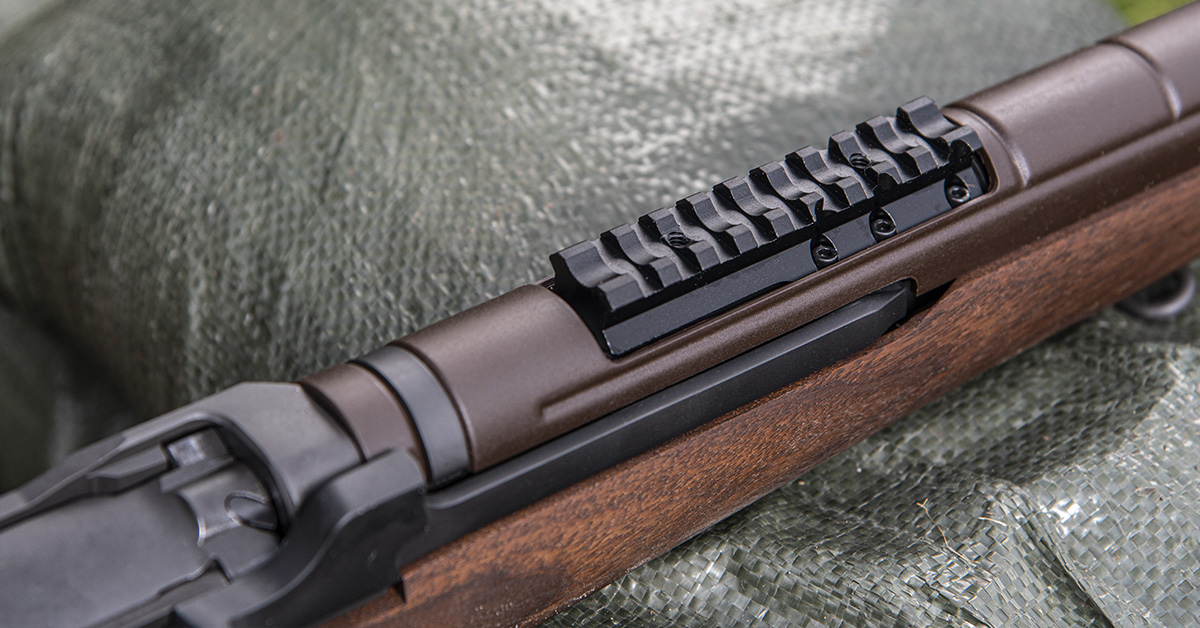 Springfield gave this M1A the “scout” moniker for its shorter barrel length and the integrated Picatinny rail. It is not a true “scout rifle” per Jeff Cooper’s vision — too heavy for that — but the rail inclusion does accommodate the low-power, long eye-relief optic quotient Cooper favored for his go light, hit hard platform. 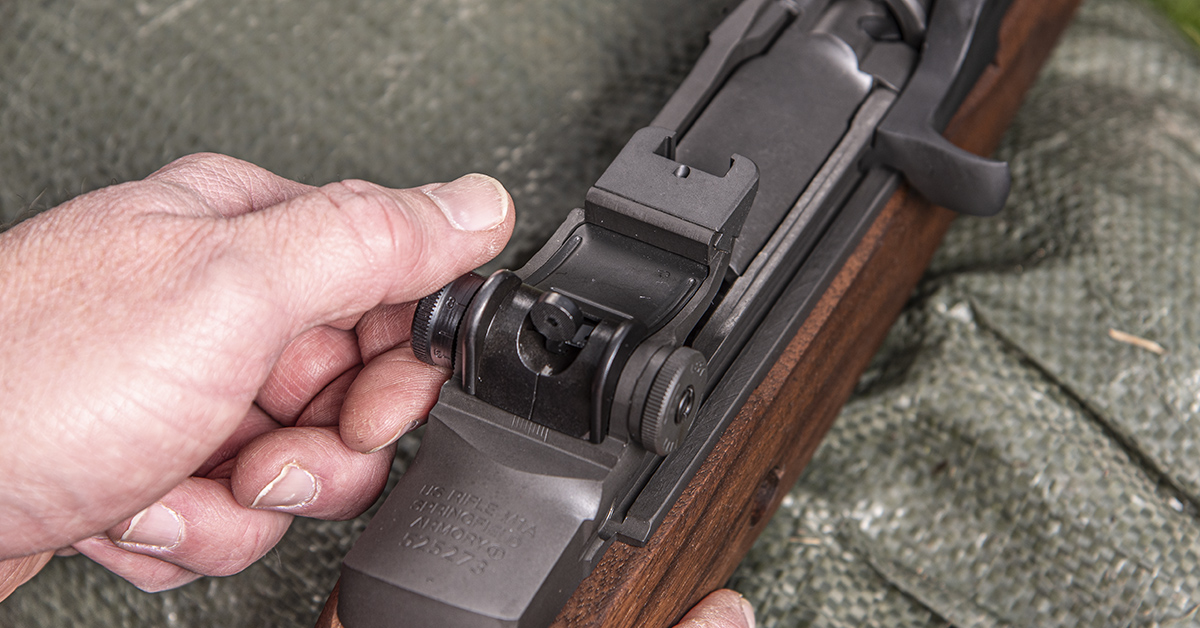 While the M1A Scout Squad can be used with a scope, a practiced marksman has no need for glass on this rifle. The rear sight assembly is a military configuration with a .0690-inch aperture. The rear face is textured to eliminate glare and the hole is sized right for 200-meter-plus shooting distances. Rotate the left drum to dial in elevation once zeroed. 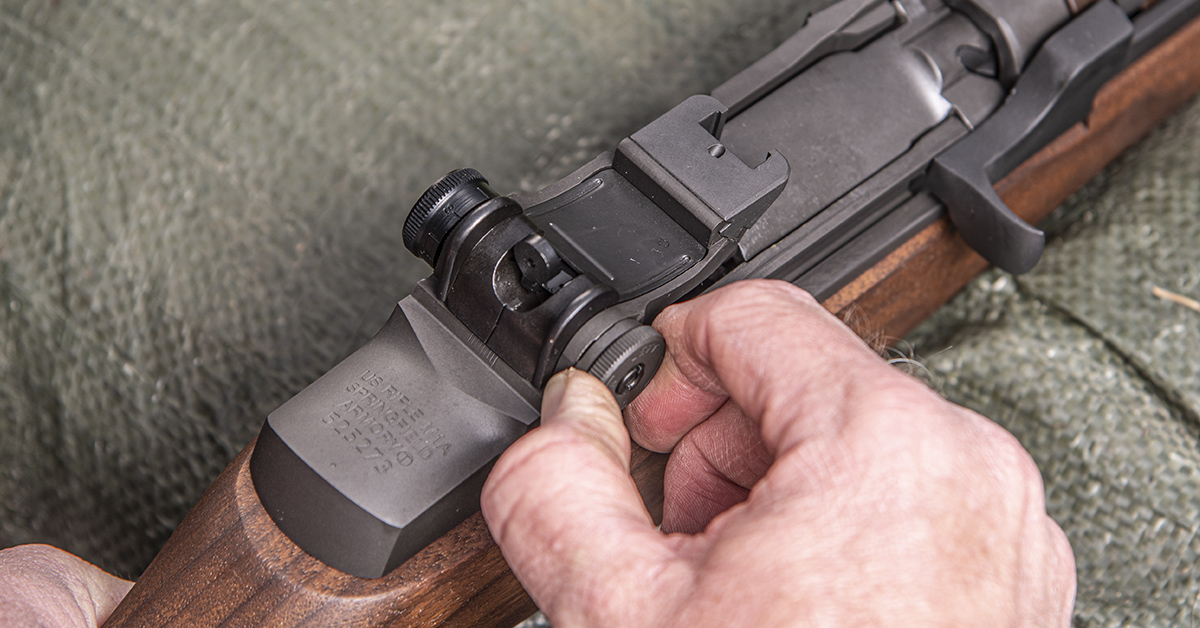 Included with the rifle is a reprint of the Department of the Army Technical Manual (TM 9-1005-223-12) for the original M14. Since the M1A Scout Squad follows the M14 pattern, all operational and maintenance procedures are the same across both platforms. In it, the zeroing process is outlined. Once zeroed, the sight can be dialed for distance. 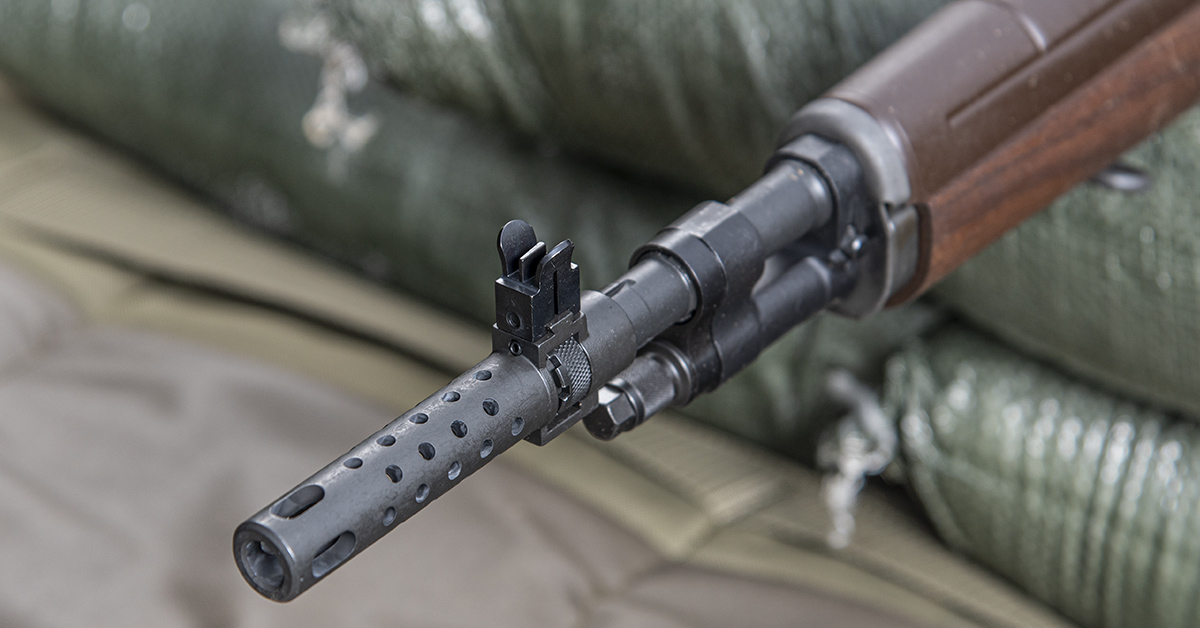 The front sight is a National Match unit featuring a .062-inch blade. The edges are crisply machined, offering a fine focus point that provides a good sight picture for precise aiming. A warning, though. I found aiming a challenge in the low light, dusk/dawn timeframe if the target is also dark — partly due, no doubt, to the tight aperture. In moderate to high ambient light, no problem. Then again, my eyes have some mileage on them now, so maybe it’s just me. 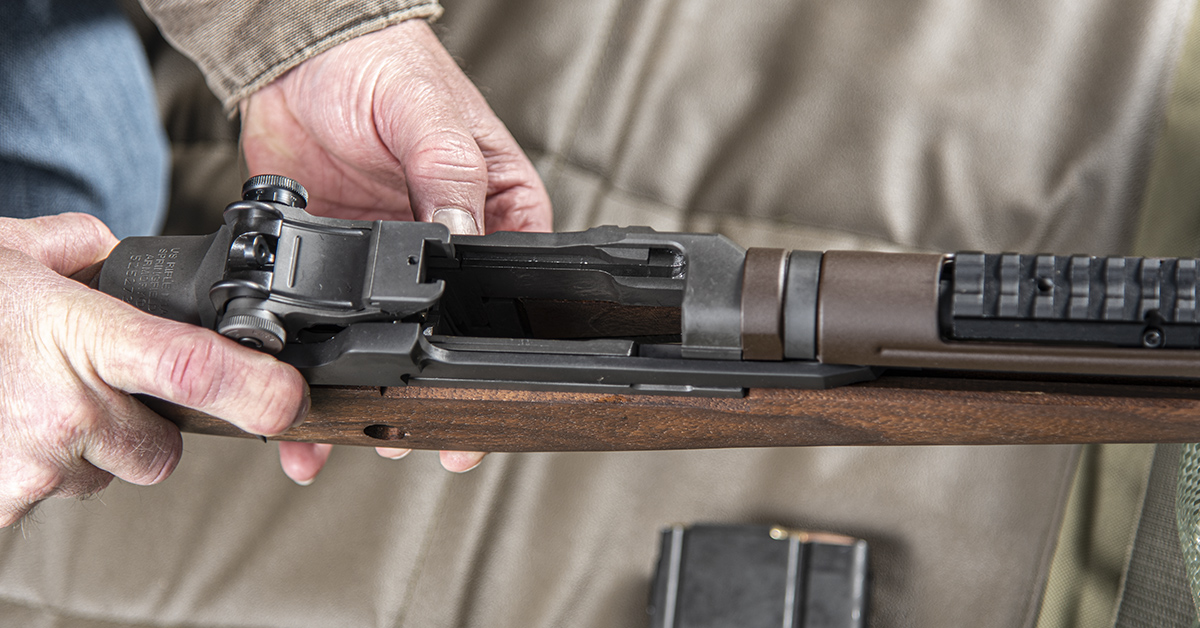 The bolt holds open on the last round fired. To close it, remove the magazine, pull back on the operating rod handle, depress the bolt lock lever on the left side of the receiver, and then release the handle. 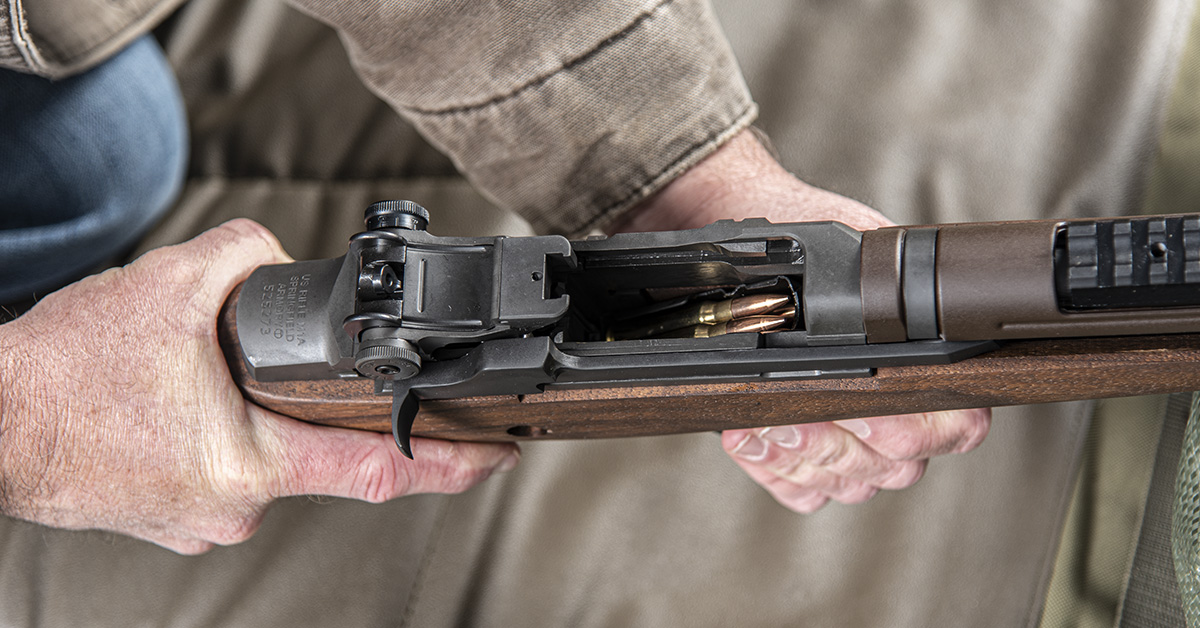 Loading the M1A takes a bit of getting used to. The magazine is inserted at an angle so that the front catch snaps into the engagement. Once engaged, push up and pull back until the magazine locks in place. It is similar to inserting an AK mag.

The magazine release is located behind the magazine. Push forward on the lever until the magazine disengages and pull the magazine out. The lever is stiff and, unlike an AK mag release lever, which you can easily release with your forefinger, the M1A lever demands a solid push forward to disengage. 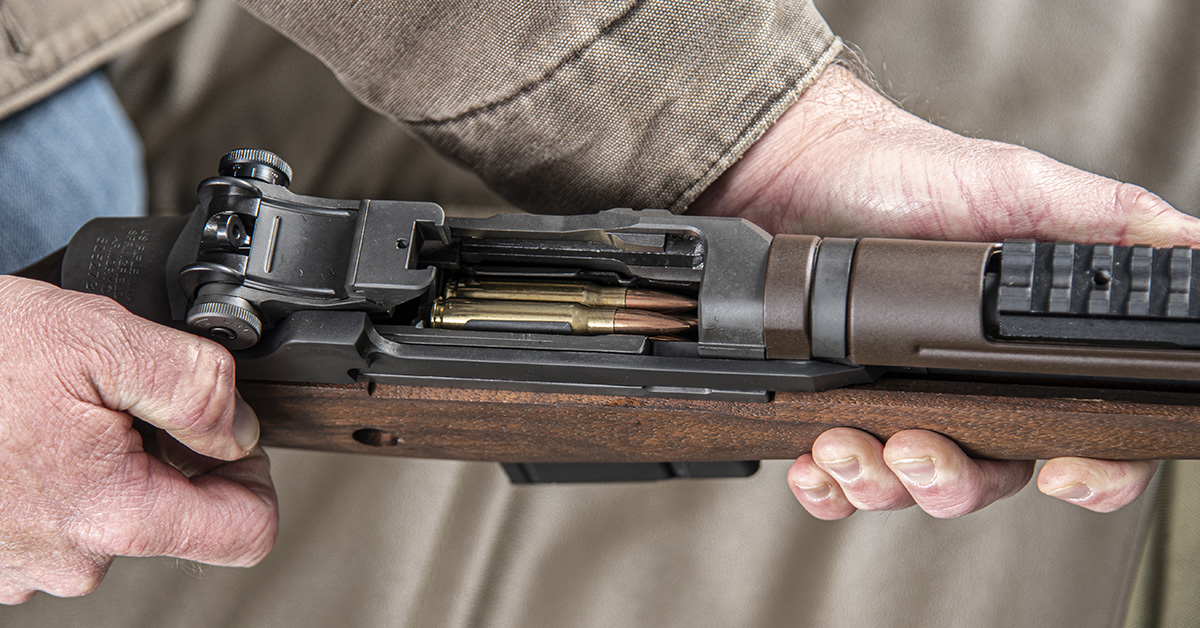 Once the loaded magazine is correctly inserted, simply pull back on the operating rod lever and release to chamber a cartridge.

As for the safety, it is positioned just ahead of the trigger guard. It, too, is stiff in operation. Move the safety forward with your trigger finger to fire and pull it back to return to safety. 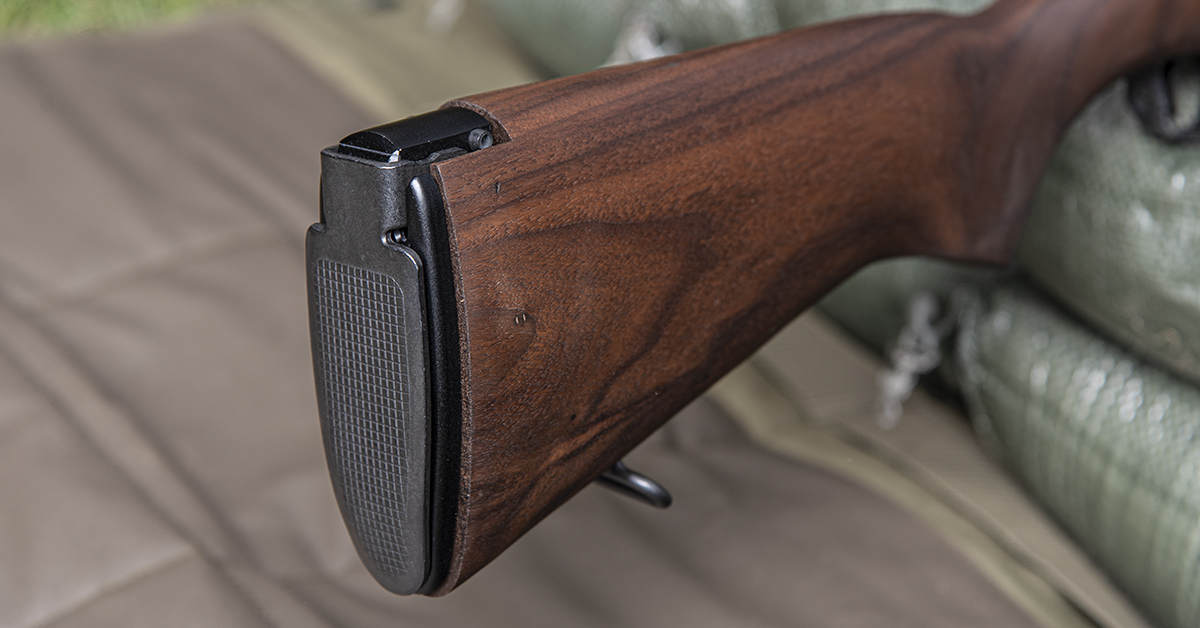 The M1A has a metal buttstock plate. You’ll find no recoil absorption here. 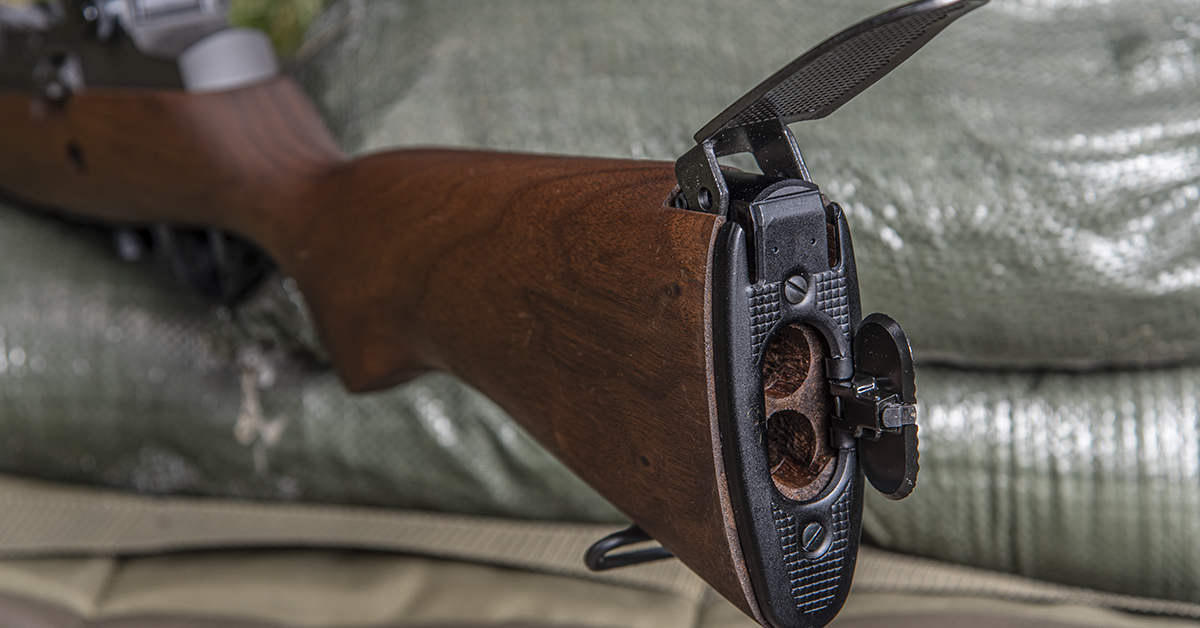 Flip the butt plate up and you’ll find a door that opens two channels in the butt stock. These are intended to hold the M1A butt stock cleaning kit for field maintenance.

I spent time this winter getting to know this rifle, and it’s not for everyone. The generous stock profile and thick wrist takes some getting used to, as does the 9.3-lb. heft. Still, it shoulders well, and the cheek weld put my eyes right in line with the iron sights.

While the rifle fires 7.62x51mm NATO/.308 WIN, it is a cupcake to shoot. Given the 9-plus-pound weight and gas operation, felt recoil is modest. No hiccups in the feeding or ejecting department, either. 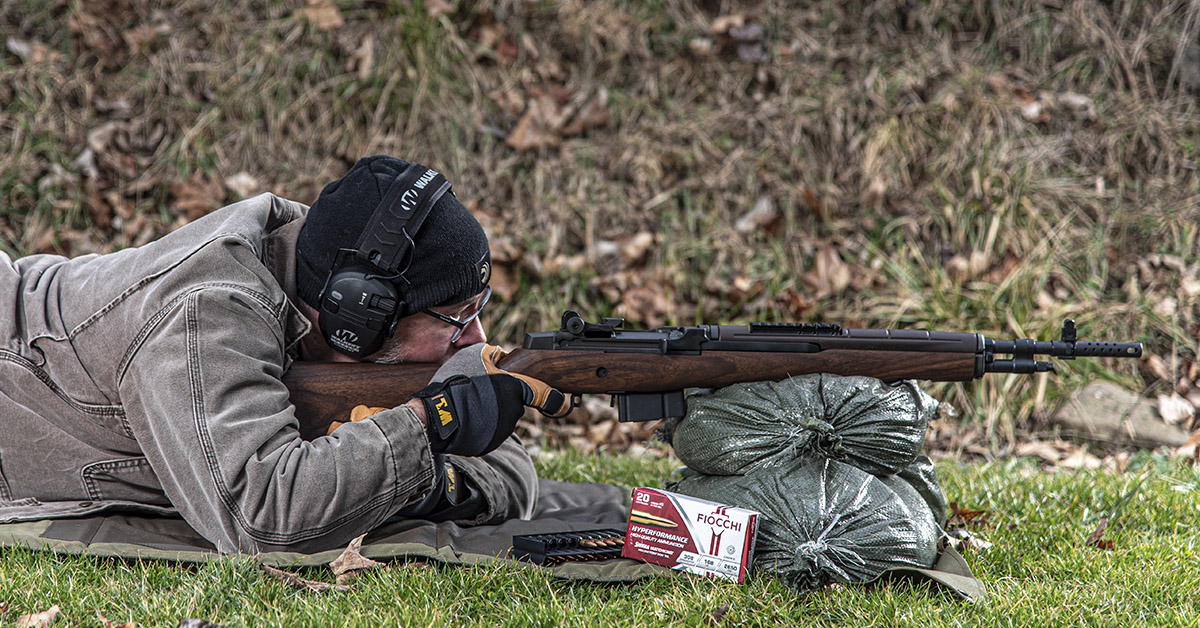 For most of the testing, I ran Fiocchi’s Hyperformance .308 WIN sporting 168-grain Sierra MatchKing’s. Shooting prone off sandbags, I followed the original military M14 zeroing protocols, the goal of which is to deliver five consecutive rounds into a 6.1-inch circle at 100 meters.

While most modern shooters are quickly enamored with the latest designs and technology to hit our sport, there is an indelible charm to be found in classic firearm construction; guns that deliver no-frills elegance yet are tank-tough and operate like the proverbial well-oiled machine. Such is the Springfield M1A Scout Squad. 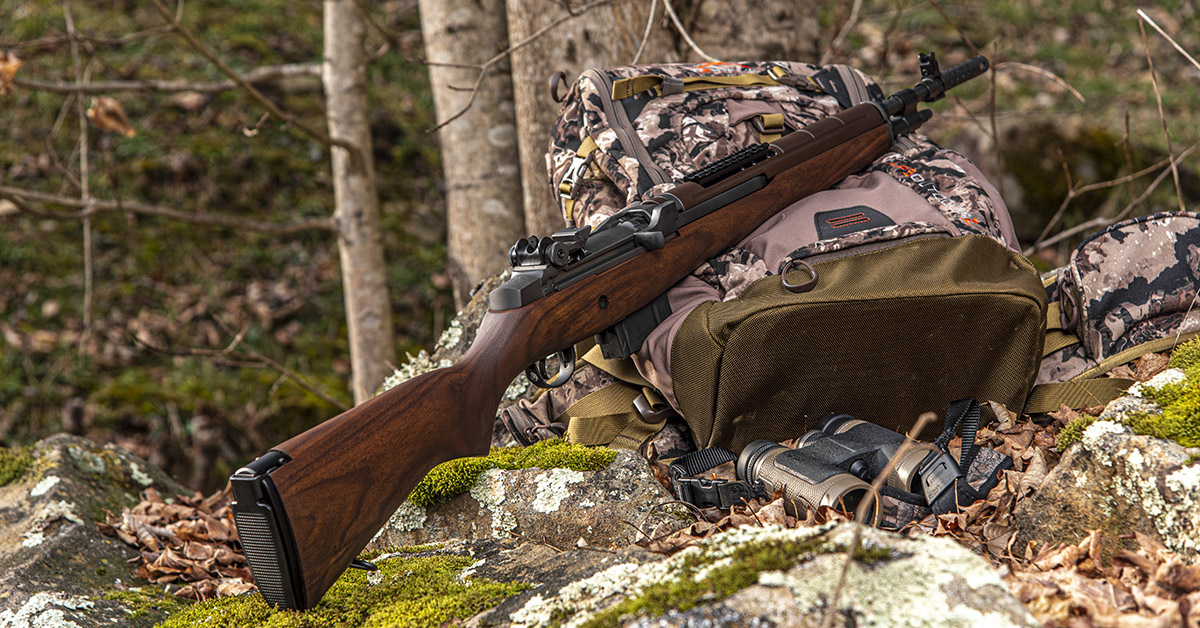