Just a few short years ago, shooters had to choose between size and capacity. If you wanted to carry a subcompact pistol, that meant that you were going to have to live with something on the order of seven rounds or so. Gun owners don’t like making choices, that’s why they make 64-capacity gun safes.

SIG Sauer broke through this ceiling in 2018 with the introduction of the P365 and changed the entire concealed carry market. Following this release, major gun companies around the globe introduced their pumped-up subcompacts. One of the latest is the Ruger Max-9. The Ruger Max-9 represents the latest and greatest from the Connecticut-based manufacturer and is thoroughly thought-out to give shooters the features that they want, right out of the box. 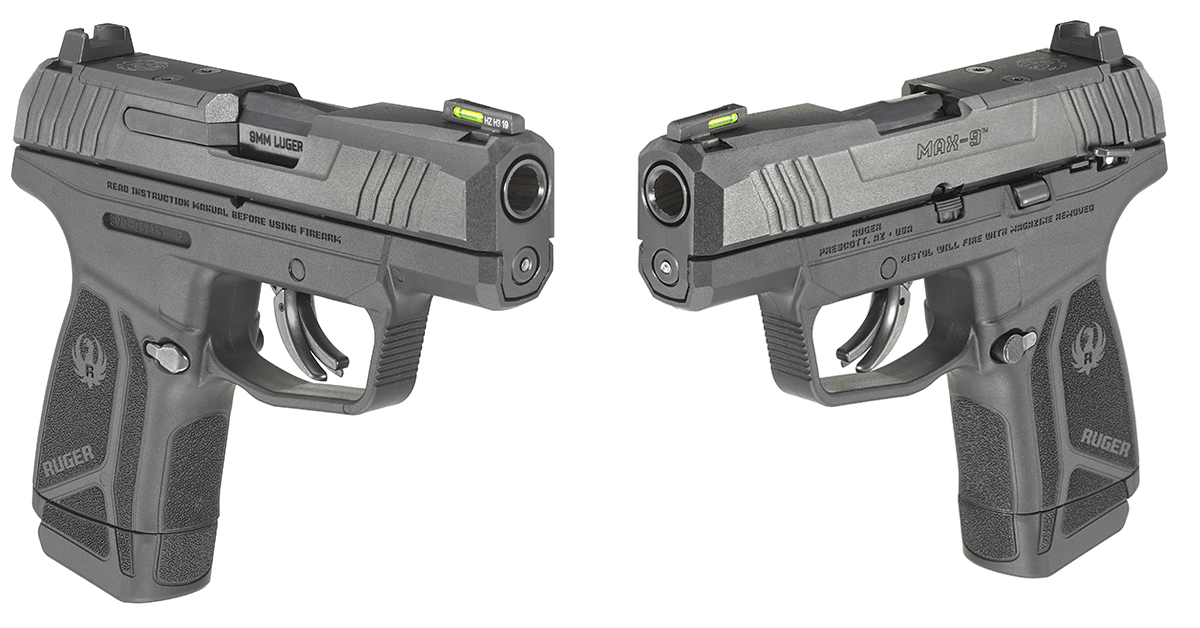 The first time I laid eyes on the Max-9 was also the first time I laid hands on it. My first impression was, “Gosh, this is small!” Ruger shaved off as much as they could to make a high-for-size capacity pistol that casts the same shadow as their top-selling LC9s, which might have its days numbered. With a cleverly designed double-ish stack magazine, the company was able to pack in 12 rounds plus one in the chamber. If you live in a communist state, Ruger also offers 10-rounders that still feature the extended baseplate for a complete grip. Ruger includes a flush-fit mag for deeper concealment, although this one only holds 10 rounds. 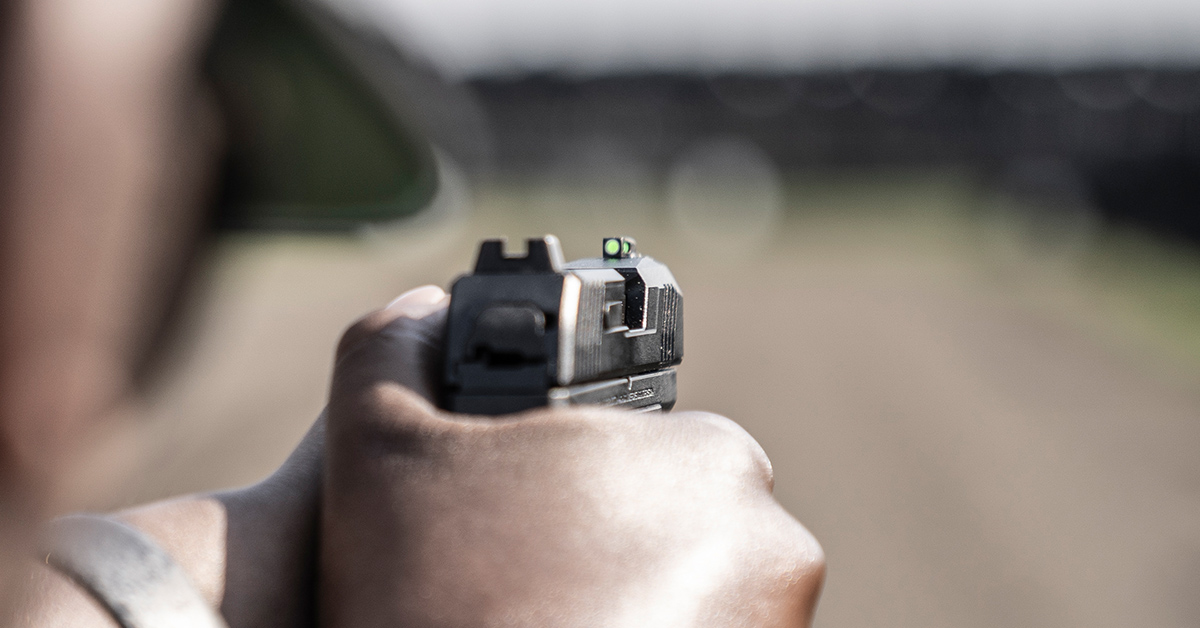 Aside from a few extra cartridges, the Max-9 also has a few extra ways to aim. The new pistol features a combination fiber optic/tritium front sight that fits snugly into a blacked-out rear sight notch. I’ve always been a fan of this configuration because it draws your attention away from the featureless rear sight and places it on the front sight, which is imperative for rapid target engagement and, of course, accuracy. The Ruger Max-9 is also milled out for a red dot and anything with an RMSc footprint will mount directly to it. As the iron sights are slightly elevated, most optics should co-witness with little effort. 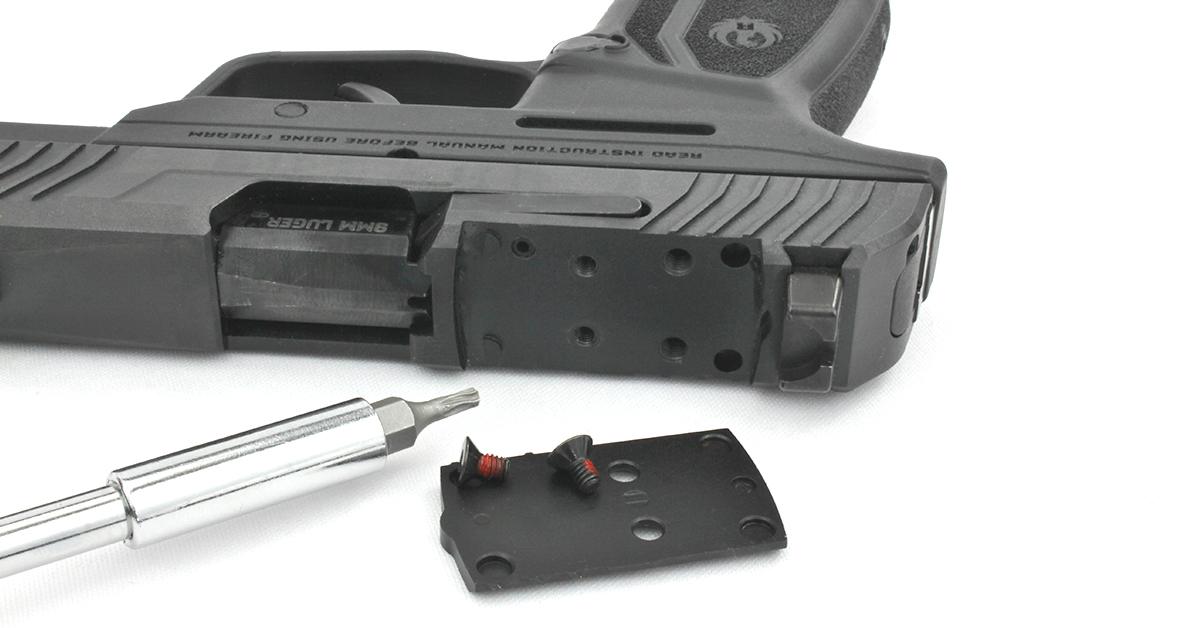 While sights are important, if the human interface is flawed, the gun is relatively worthless. Ruger’s engineers knew that a gun that is tough to shoot or to operate simply won’t sell. It’s easy to see that they put a great amount of time into the ergonomics, texture, and function of this new design. 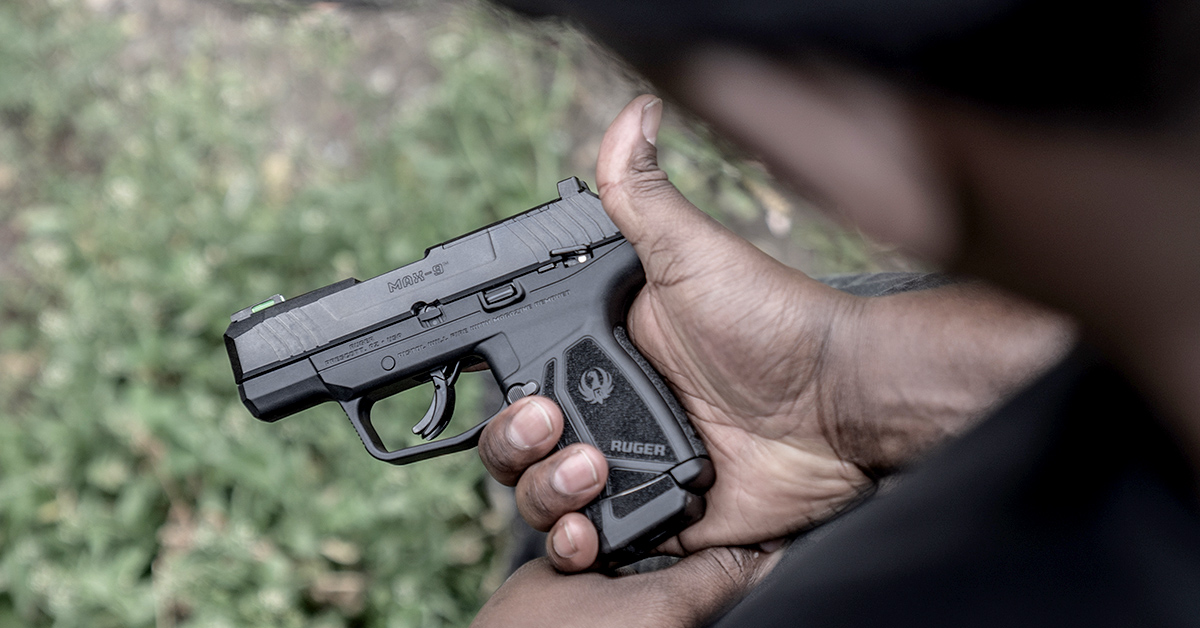 A 360-degree skate tape-style texture can be found around the entire grip and provides one of the stickiest surfaces we’ve seen in a polymer-frame pistol. Some might argue that it’s rough against the skin when being carried but that is remedied with an undershirt or better holster selection.

The Max-9 comes in two versions—the Standard and the Pro. Both are nearly identical, with the Pro being void of a thumb safety. Of course, if you opt for this version, it is still safe to carry, as it is built with a trigger safety that mimics nearly every other polymer-framed striker-fired pistol on the market. With my Lyman Digital Trigger Scale, I measured an average break of 6 pounds, 7 ounces. This is a little stiff for a target gun but just right for a carry gun because it reduces the chance of a negligent discharge, particularly in stressful situations. The trigger had just a touch of grit to it but not a bit of overtravel, making it more than adequate for its purpose. I measured a reset at 3/10ths of an inch, which is longer than I would like but speaks to the defensive nature of the gun. 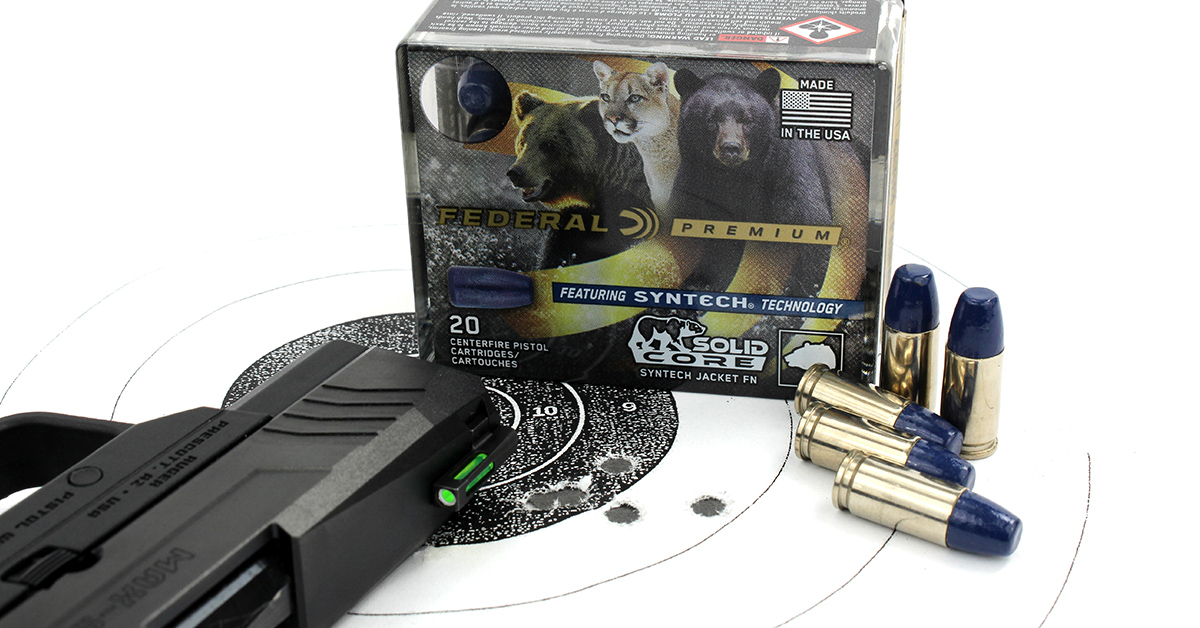 For my range day, I was able to grab a few boxes of Federal’s new Solid Core 9mm ammunition. I chose this round because, aside from two-legged beasts, this pistol would be great to defend against four-legged aggressors as well. The heavy, solid Syntech projectile is designed to penetrate thick skin and crash through bone, getting the most out of cartridges like the 9mm.

At just a hair over a pound, the Max-9 is perfect for a hike and with the snow finally gone, I’ve been thinking more about hitting the trail. 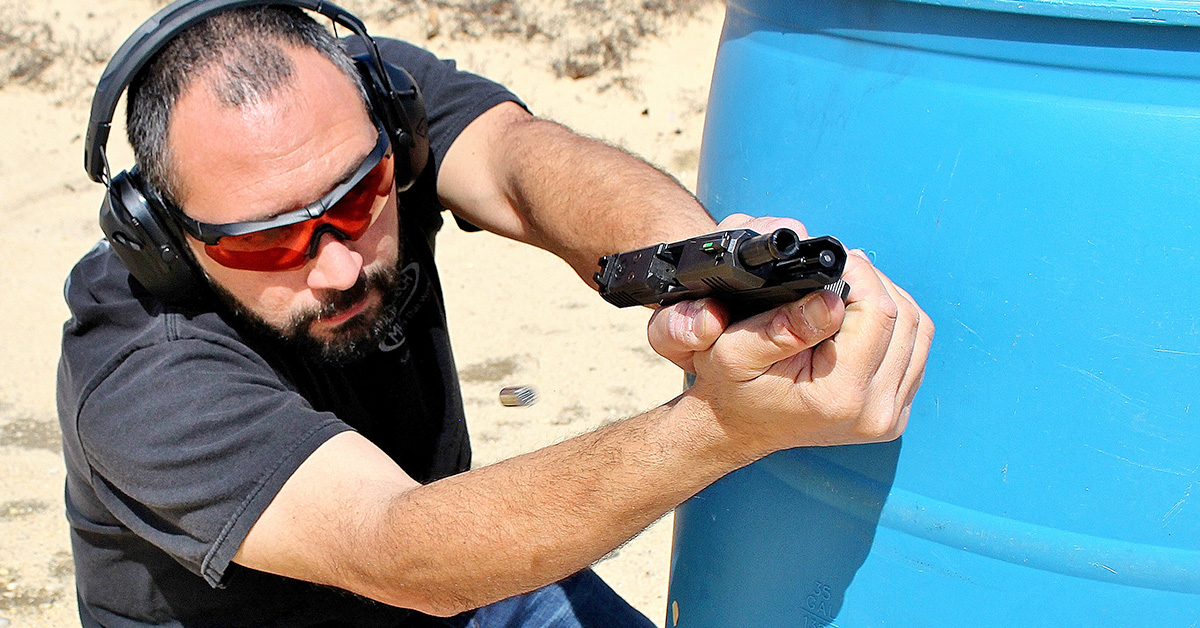 My first round down range had a bit more recoil than I was expecting. While my hand did slip a bit from shot to shot, I wouldn’t call the recoil unmanageable—just noticeable. The other thing I wasn’t expecting was nearly one-hole accuracy. At seven yards, this pistol/ammunition combo didn’t print a group bigger than 1.48 inches, with my best five-shot group coming in at 1.02 inches. The new subcompact fed, fired, and cycled just fine and locked open every time the magazine ran dry. Impacts were about an inch right, but I could adjust that through the rear sight if I ever feel a real need to.

Overall, I was very satisfied with the gun that marks Ruger’s entry into the higher-capacity subcompact handgun market. It was comfortable to hold, comfortable to shoot, and not too bad against the waistline. I also liked that it’s built without a magazine safety, which ensures that you still have at least one round if your mag gets knocked out during a physical altercation. I found the grip to be the perfect size for my hand with the extended magazine, allowing me to get every finger on the gun, although the flush fit was also manageable. 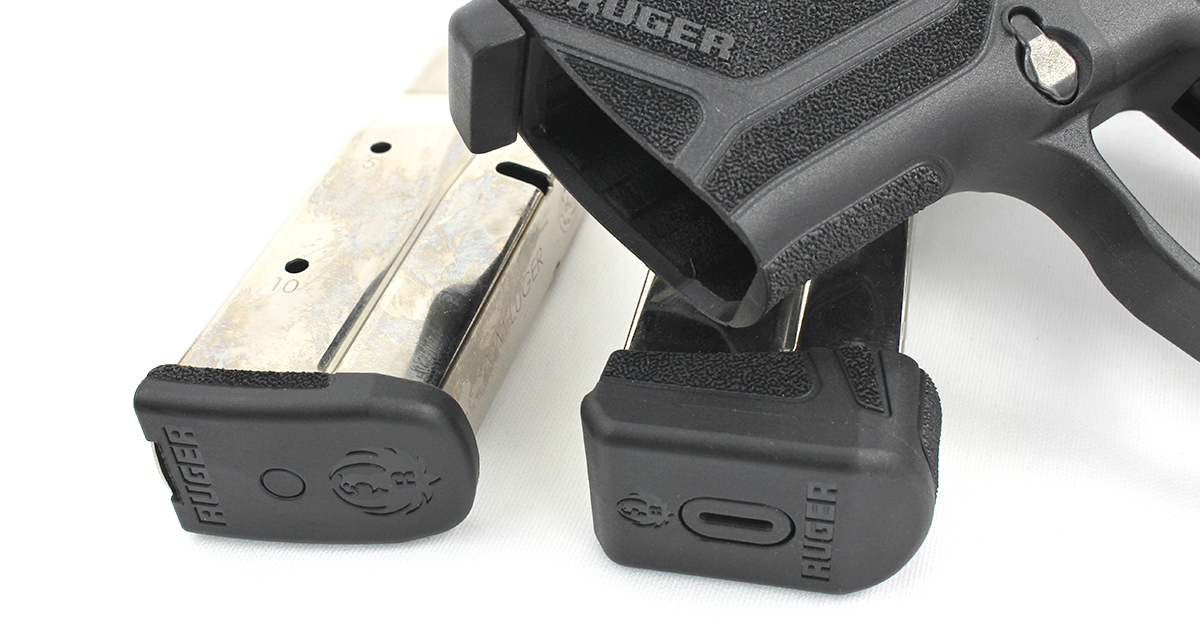 Also pleasing is the MSRP of just $499, making the Ruger Max-9 not only easy to fit into your palm but your budget, too.