Except for high-tech indoor facilities in a few large cities and shooting schools located in rural areas, shooting facilities open to most gun owners are designed for bullseye matches, bench-rest shooting, military-style rifle or pistol matches, bench-rest rifle competitions, or traditional shotgun sports like skeet and trap. These facilities are often called “square ranges” because they are laid out in, generally, a square or rectangular fashion, where targets are set up or launched in a manner that directs fire to a specific area so bullets and shot can impact a safe barrier.

The problem with this is that fewer and fewer of us reside in the country where we would normally have access to places where we can plink or practice the skills that we either learned by attending shooting schools or that we have read about. Unfortunately, these skills are often the ones we may need to protect ourselves, especially in the current climate of rapidly increasing criminal violence. In response to the lack of places to practice defensive shooting, some forward-thinking instructors have invented several self-defense drills for rifles, handguns, and shotguns that can be performed on square ranges.

Handguns have always been a basic personal defense firearm. In addition, shorter-barreled shotguns, lever-action carbines, and semi-auto carbines have made compact long guns another mainstay of personal protection. Given this, it’s important to practice regularly and make practice drills match tactical shooting as much as possible.

Many square range tactical handgun and long gun drills simply require a shot timer, a defensive firearm, and ammunition that is suitable for the range where you’re shooting plus a target that fits the needs of the specific drill you intend to shoot.

Two drills I often use are the presentation drill and the animated target drill. For both, I use targets from Action Target. The presentation drill uses a photographic target that portrays a criminal “in the act.” Unlike a silhouette target, a photographic target has no clearly visible scoring rings to guide your aim. In addition, the “bad guy” is standing at various odd angles which requires you to shift your aim point to hit vital areas.

Running the presentation drill is not difficult. Place the target at the distance you want to shoot, push the timer’s start button, and then hold the firearm at low ready. When the beep sounds, raise the firearm to firing position and fire one to three shots at the vital areas of the upper chest and/or head. Handgun shooters can present from the holster, if the range they are on allows it and if they are trained to draw from a holster.

After running the drill five times, I unload the gun, call all clear, view the target, and paste over the hits. I’ll repeat the drill from different distances, record the average time, and measure the diameter of all shots. This data forms a baseline to determine future improvement.

The animated target drill was developed by well-respected firearms instructor John Holschen who owns the West Coast Armory North in Everett, Washington. John noticed that trainees’ proficiency dropped markedly when they transitioned from shooting still targets to participating in Simunition training. As a result, he designed a drill that required the student to change his or her point of aim between shots by using a single target with a series of numbered scoring zones.

If possible, start this drill at five yards with a handgun or shotgun and 15 yards with a rifle and then increase the distance to the target as times decrease and scores increase.

To begin, the trainee lines up on one scoring zone and slowly fires five shots at it, taking care to fully recover his or her sight picture after each shot. Only shots within the colored scoring zone count. Once the hits are going where they should, the next task is to use a shot timer and fire one precise shot at one zone, move the gun to the right or left while recovering from recoil, and place a precise shot on another zone. Five to ten repetitions are usually required for trainees to consistently hit both scoring zones within a reasonable amount of time.

Next, add a third scoring zone to the drill, which is below the first two. This introduces a component that requires moving the aim point vertically as well horizontally. Eventually, the trainee will be able to change the sequence in which the zones are shot and include double and triple taps on some of them. Holschen found that even though the zones are not moving, proficiency at hitting moving targets in Simunition training improved from 25% to 50% after training with this drill. 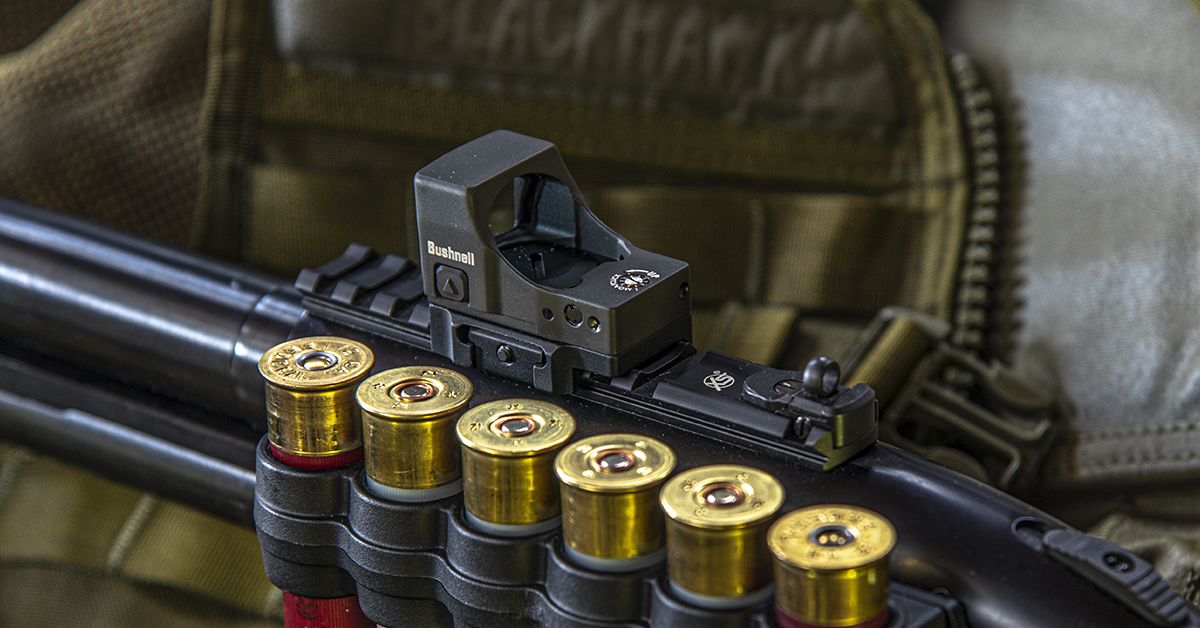 Traditional shotgun ranges are not designed for shooting presentation and animated target drills using slugs and buckshot, but tactical skills can be developed when shooting tactical shotguns on them.

First, aerial shooting requires getting on target fast. This is a very important skill because people involved in tactical engagements rarely stand still waiting to be shot. Clay bird practice is especially important when using shotguns equipped with optics. Optics require you to quickly see both the clay bird and the red dot and then use the dot to establish the proper lead and fire before the bird moves out of range. It’s not an easy task because the optic’s frame or tube limits visibility. Therefore, shooting skeet or trap with a tactical shotgun really helps build your mental agility and sharpen your skills to shoot with both eyes open. For example, the best way to get into shooting skeet with an optic is to start with the low house at station seven, and then move on to the other stations.

Just because local facilities only offer access to traditional shooting ranges, acquiring and maintaining at least some basic tactical skills is still possible.

Every square range has its own regulations, and it’s only fair to yourself and the owner of the range to inquire about the types of shooting that his or her facility allows. Who knows? You may be pleasantly surprised.

This premium Model 327 in .357 Magnum may be the ticket for those desiring a highly capabl…