A feisty .22LR rifle, a bit of patience, and a whole lot of sneaking skills mean high hunting adventure and a pot full of YUM!

The narrow valley behind my grandparent’s house was the epicenter of my hunting world when I was young. Cattle grazed the creek bottom and hillsides, and where it was too steep for the bovines to travel, walnut, sumac, and pawpaw trees provided a shady patchwork.

Inhabiting those sporadic oases of cover were groundhogs. I’d hunted them with my dad and my grandpa from as early as I can remember, and I knew every den hole in that valley. Before I was allowed to hunt by myself, I once swiped one of Grandma’s old hickory broom handles and whittled an arrowhead-shaped spear point on one end. I fancied it to be just as lethal as the flint arrowheads that littered the knoll where my grandparents’ house stood—the site of a long-term Shawnee village from way back when.

There was an active groundhog den hole just across the barbed wire fence and over the steep bank. I took that “spear” and settled myself just above the hole with my weapon poised directly over it. It was just after supper time, so I knew that the resident groundhog would eventually come out to feed. Not sure how long I sat there, ignoring the flies and gnats that zipped about my head, but eventually I saw the pointed, dark nose and coarse-haired muzzle ease out of the darkness. Several minutes passed as the groundhog sniffed and looked and pondered on whatever it is that groundhogs ponder on.

Finally, it eased its head a bit further out of the hole. I could see its eyes and ears. Adrenaline pumped through my veins, and I think I started to shake from excitement. Then, in one fluid move, my gray-haired nemesis stepped out of the hole, and I plunged my spear between its shoulder blades.

The groundhog twisted around and gnashed its teeth in a flurry of dust. My broomstick spear slipped in my hands and the beast hastily retreated into its den.

Looking back on that moment always makes me laugh. Despite my best efforts to whittle a spear out of wood with a blade that looked to me at the time to be plenty sharp, that point didn’t stand a chance of penetrating the groundhog’s tough hide. The groundhog survived the encounter, and I had a few of its hairs stuck to my spear point to prove I’d “counted coup.”

In the ensuing years, I honed my hunting skills by pursuing those groundhogs with a bow. If you’ve never tried it, I highly recommend it. Nothing will refine your stalking and stealth techniques like hunting groundhogs with a bow and arrow. Groundhogs are crafty, hyper alert, sharp in the eyes, and can zip back inside their dens at the slightest hint of danger.

They also make for some good eating. Every time I brought one out of the valley, Grandma would toss it in the pressure cooker and we’d have it for dinner, usually with mashed potatoes, half-runner green beans, and some homemade bread. 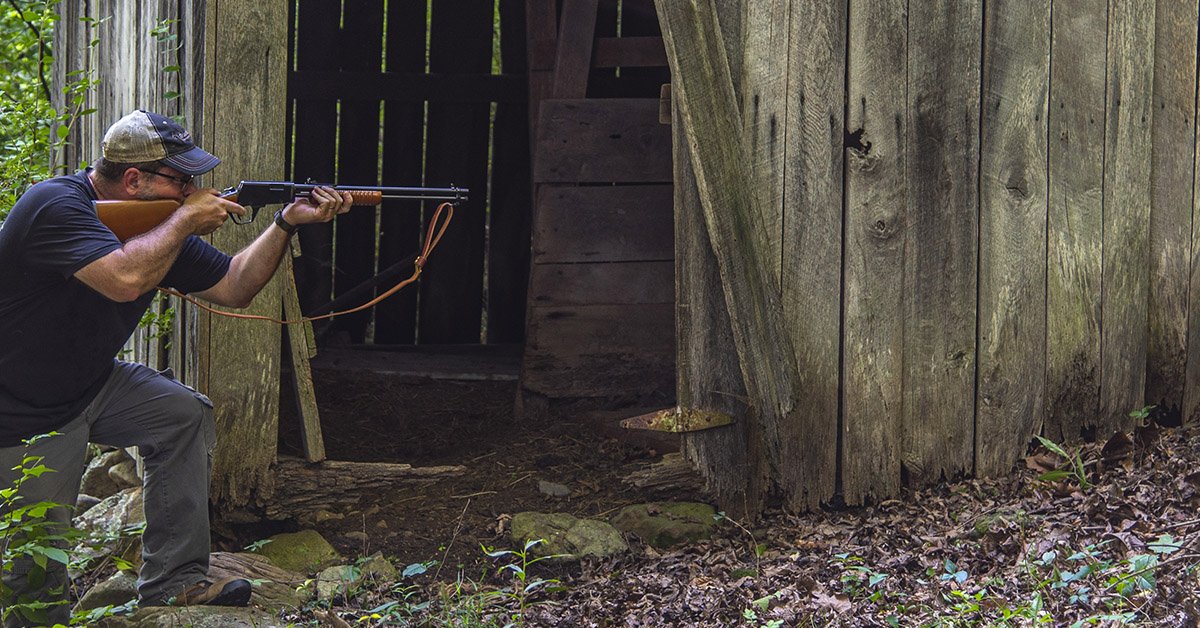 All of that to say, hunting groundhogs is a summer ritual—even a heritage—in many parts of the country, especially in the Appalachian regions, where these hardy marmots once were an important part of the diet for many families. And there is no better time to pursue these critters because the young ones are out and about, providing greater opportunities for success. They are also more tender than the older ones, so if you want to try a plateful, grab your gear, and go!

The good news is that you can hunt groundhogs with just about anything—vertical bow, crossbow, shotgun, rifle, or pistol. Whatever provides you the most fun is on the weapon roster. With the price of broadheads and arrows nearing $30 a pop, I favor the economical .22 LR.

Over the last couple weeks, I’ve been zeroing in on the groundhogs around the house because they’ve been casting hungry eyes towards our garden. To add a bit of sport to an already sporting pursuit, I’ve been using Rossi’s Gallery 22 pump-action .22 LR. This is a fun little piece reminiscent of the old Winchester Model 62, variants of which were commonly used at carnival and fair shooting galleries way back in the day. Hence the name “Gallery 22.” 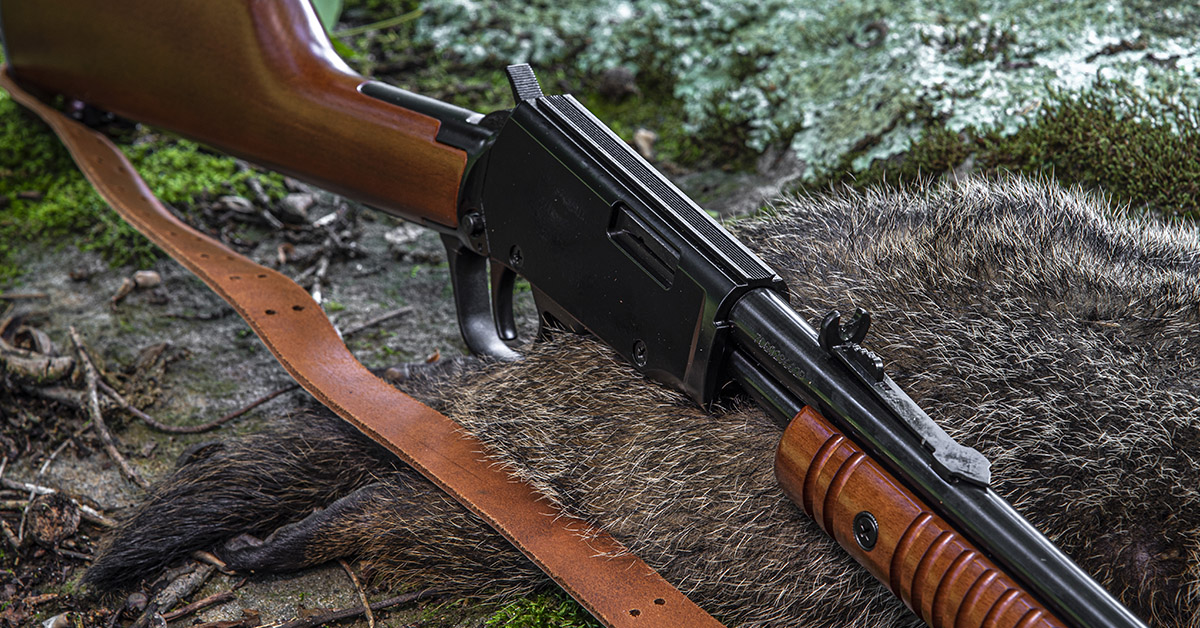 The Gallery 22 comes in two flavors—the German beechwood stock seen here and a contemporary-styled model with black polymer furniture. Both pump actions are chambered for .22 LR and have a 15-round capacity via a tube-fed magazine. 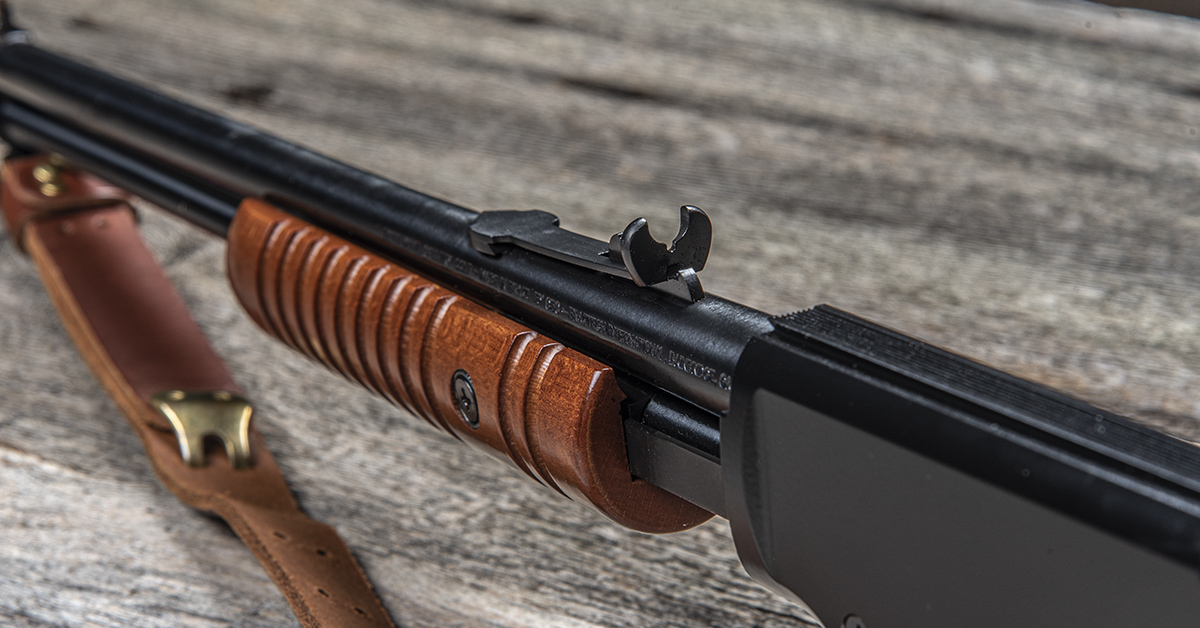 The rear sight on the wood furniture model uses the traditional-style buckhorn that is adjustable for elevation. 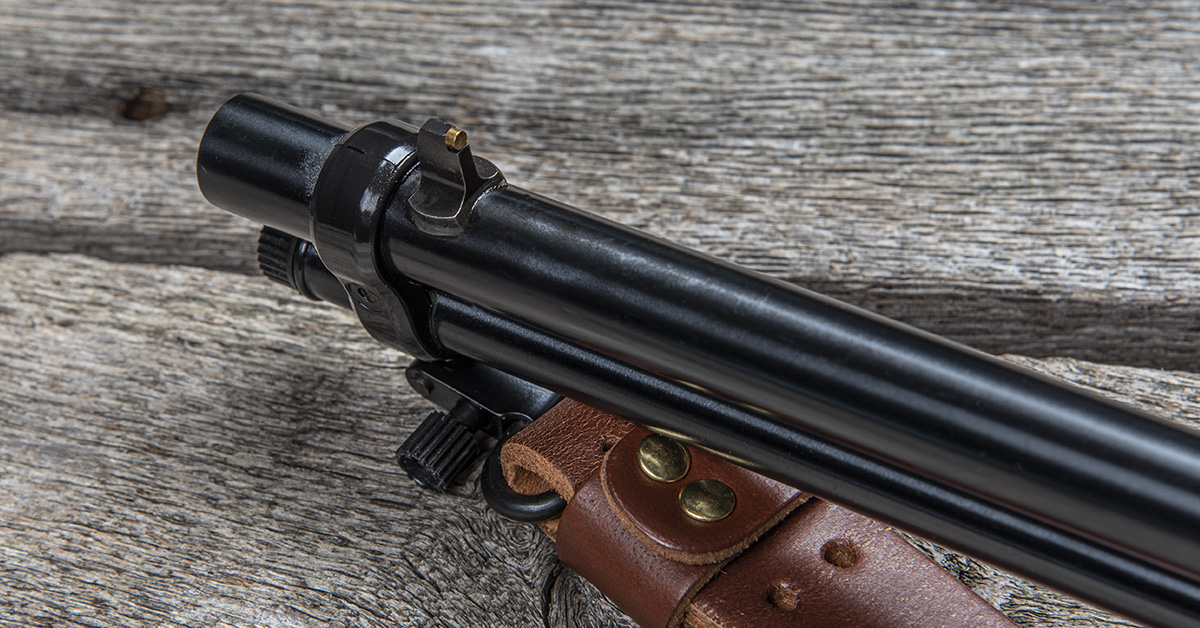 For the front sight, we find a post with a pronounced brass bead for easy viewing across most lighting conditions. Windage adjustment requires drifting the sight left or right within the dovetail slot. 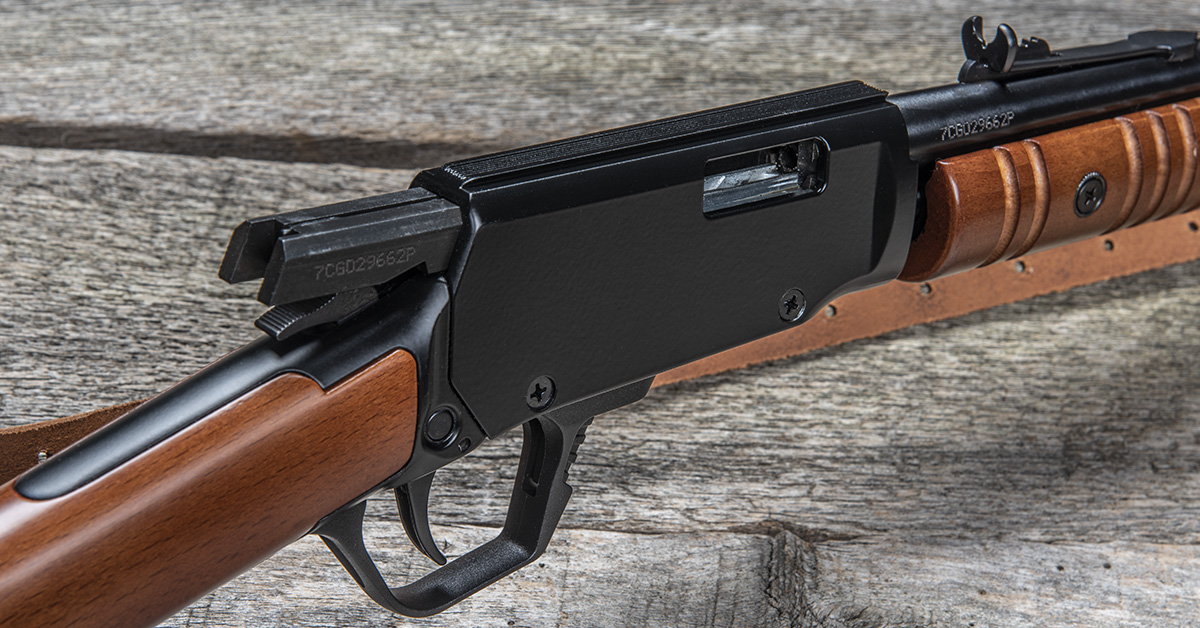 The pump action feeds cartridges from the magazine tube to the receiver and ejects the empty cases. This action also cocks the hammer when the hammer is in the dropped or fired position. Of course, you can also manually cock the hammer when you’re ready to shoot. 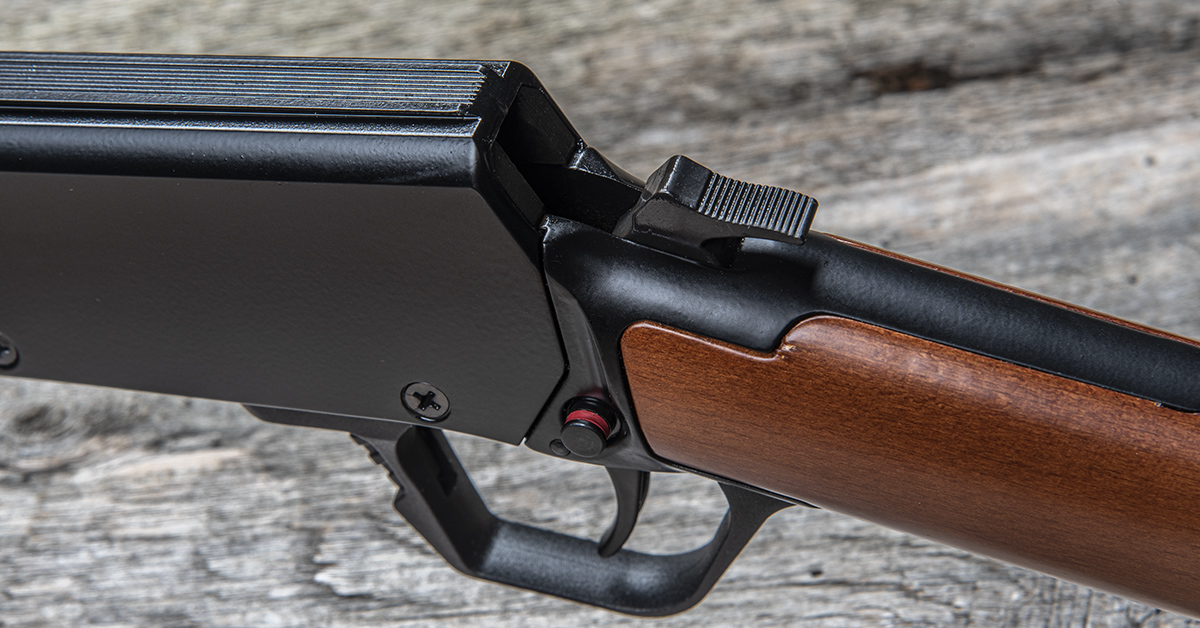 The hammer/trigger system has three positions: hammer down, half-cock/safety, and cocked. Additionally, the Gallery 22 includes a crossbolt safety that, when in the safe position, does not allow the slide to be actuated, preventing unintended chambering. 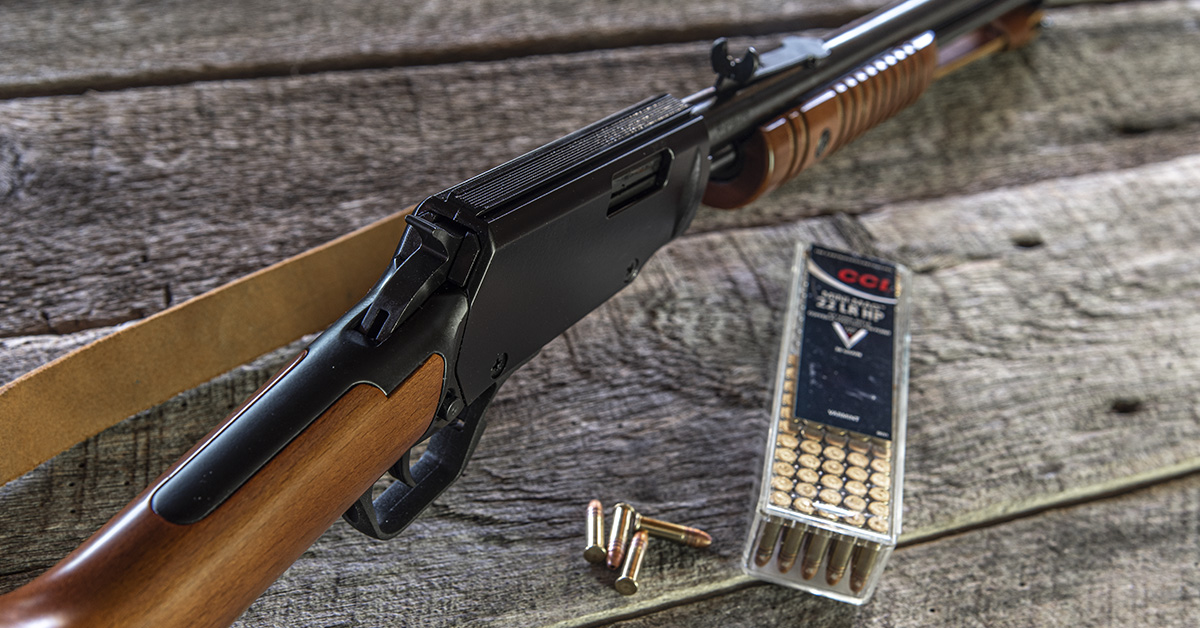 With an MSRP of $314.89, the Rossi Gallery 22 is an easy purchase for a plinker, small-game shooter, or a truck gun to fit most any lifestyle. Add a quality .22 LR ammo, such as CCI’s copper-plated hollow points, and you’ve got a combination that is both effective and fun for any rimfire chore.

If you’ve never hunted for groundhogs, you may not realize what it takes to put one in the pot. Here’s what I’ve learned from decades of matching wits with these little buggers.

Mornings and evenings are the best times to find groundhogs out of their dens, looking for tender greens to eat. An hour or two after sunup and the last three to four hours in the evening are prime times. You can try to hunt them mid-day, but they’re usually holed up during this time, escaping the heat and resting.

Field edges and the perimeters of barns or other agricultural structures are always good bets for finding groundhogs and their dens. The same is true for livestock pastures that hold some heavy vegetation or scattered trees. That is not to say you won’t find groundhogs in wide open ag land, but they tend to make their homes near some natural cover. Groundhogs can also be found in the woods, but I have found these deep-cover residents to be extremely difficult to hunt because they are so darn skittish.

Groundhogs never stray far from their den, allowing them to zip back into their holes at the first glimpse of danger. Knowing this, you can observe them when they are out and easily create a mental map of the dens in your hunting area and figure out the best strategies to approach or set up a stand.

Binoculars are a great asset when hunting groundhogs. The animals’ gray and brown hair allows them to blend with surrounding vegetation—especially in areas with a lot of mixed vegetation and shadows. Binoculars will help you find them where you otherwise might miss them with the unaided eye.

Watch the flies! Groundhogs will often linger just inside their holes before emerging. A surefire indication that one is about to pop out of the ground is if you see flies start to buzz around the den opening. When that happens, stay still and get ready!

Don’t despair should you startle a groundhog and it quickly runs into its hole. Often, they will ease their heads back up to see what’s going on. Use that time to get in position for a shot and wait patiently. If they don’t reappear within five minutes, move on to the next hole.

One this is for sure…groundhog hunting is pure fun and a terrific way to not only hone your big game hunting and field shooting skills, but it is also the perfect antidote for our need to hunt between spring turkey season and the general fall hunting season. And, as you will see if you try the following recipe (which works great with most any wild game animal, not just groundhogs), the common woodchuck, whistle pig, or whatever vernacular applies in your region also makes for a great meal!

As with squirrels, groundhogs are often thought of as second-class table fare, if they are not outright shunned from the kitchen. Too bad, because those who have never tried this pedestrian marmot have been missing out. We don’t want to dissuade you from trying groundhog when we say that the meat tends toward the tough side, but that is where pressure cooking comes in—especially with the Instant Pot. If you don’t have one in your kitchen, you need it, because its multiple cooking modes make easy work of just about any food preparation…even pressure cooking. 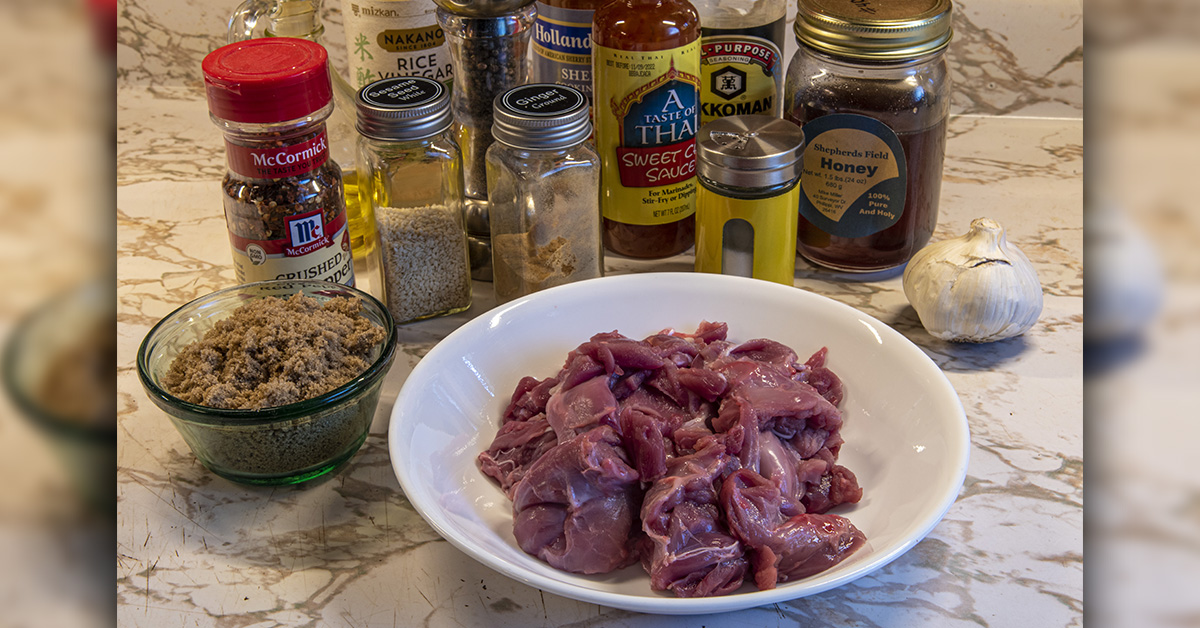 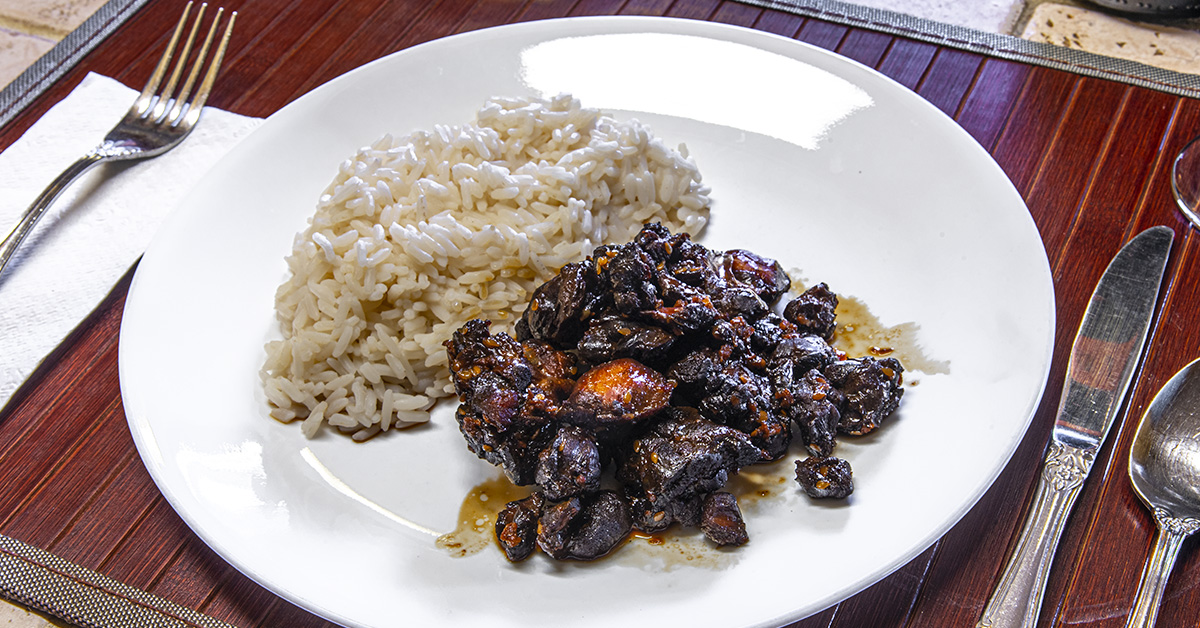 Build Your Own AR NOW! Pt. 1: The Lower Receiver

AR components are once again in stock. If you’ve ever wanted to build your own AR-15, get …