I’d never heard of Goat Guns until one of my Shoot On colleagues sent me a link and said, “Check this out.” It only took a few seconds on the Goat Guns website before the hook was set deep and I was being reeled in.

I’ve always had a fascination of working small-scale projects—model airplanes and spaceships as a kid, followed by radio electronics and, later, firearms. What struck me immediately about the Goat Guns was not so much their intriguing 1:3 scale but their realism in not only appearance but also in their construction. The designers of these die cast models kept the focus on authenticity as they created these diminutive wonders. In the simplest terms, these model guns are broken down to a “field strip” condition, meaning they can be assembled and disassemble in a way that accurately mimics the real thing. 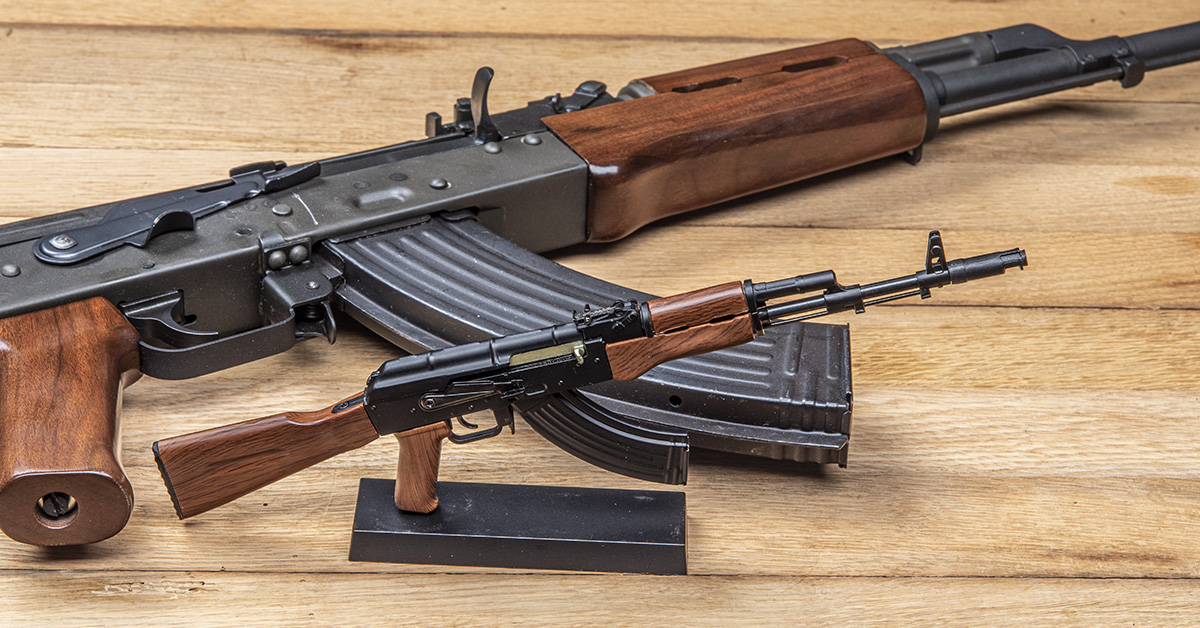 A quick perusal of the available Goat Guns options revealed numerous variations on the AR-15 platform as well as AKs, .50-caliber rifles, 1911s, sniper rifles—even a Thompson submachine gun, bullpup, and a Soviet-era Dragunov. Being a fan of the AK/AKM platform rifles and their construction (Shoot On contributor Lou Patrick and I wrote the book on how to build them), I could appreciate the level of detail integrated into Goat Guns’ version of this legendary firearm and had to have one. 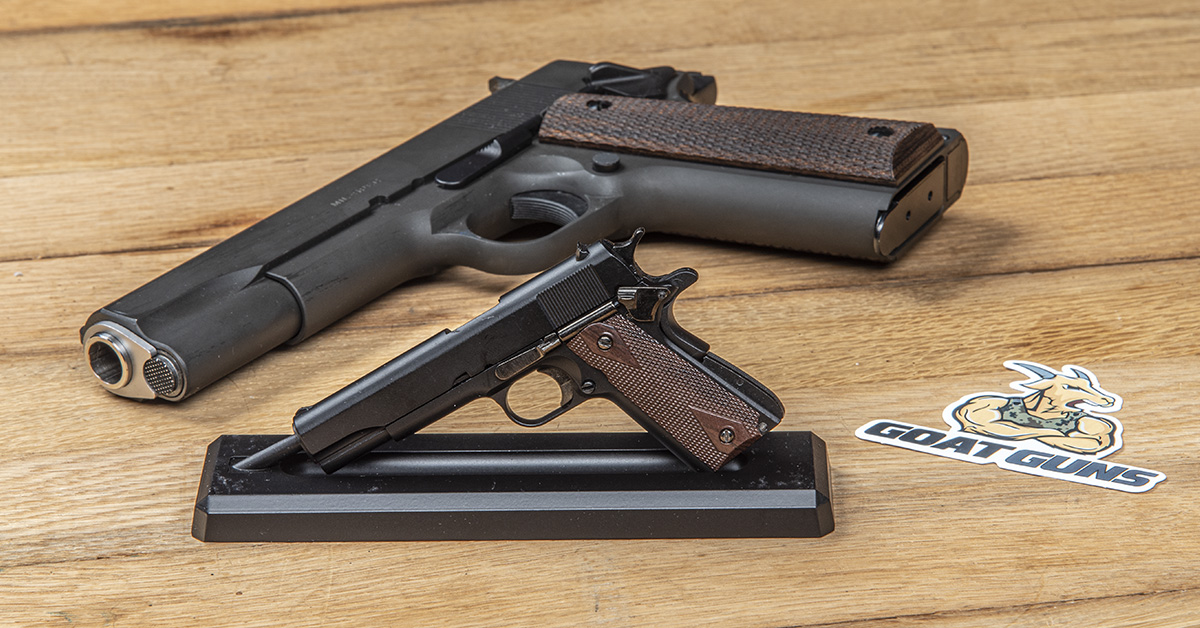 Another rough-and-tumble favorite of mine is the old-school 1911. Goat Guns just happened to offer a model similar to my Springfield .45, so I acquired their Mini 1911 along with their classic Mini AK47 in black and waited by the mailbox. 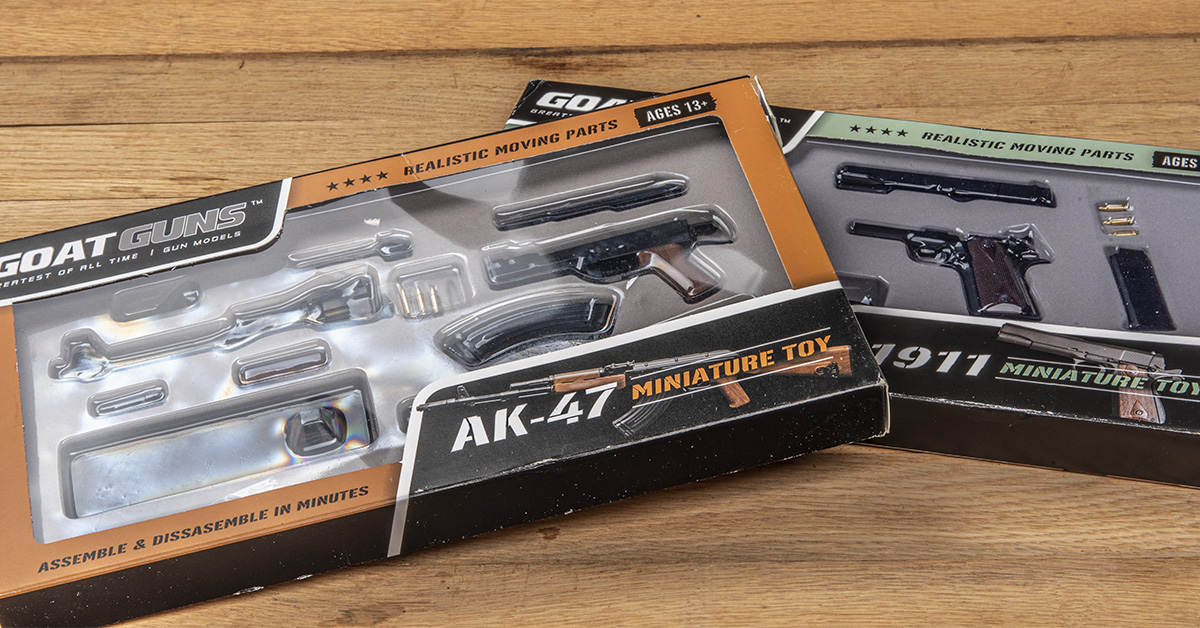 The miniatures arrived in good condition courtesy of their quality packaging. All components come nestled in a molded tray and cover that are stapled together to prevent shifting and or losing the small parts. Included in the kits are assembly instructions, all parts, a screwdriver (if required), and a display stand. Aside from the Goat Guns’ barrel and receiver being in two pieces, all other components in the kit go together just like a real AK-pattern rifle. The bolt and recoil spring guide rod install into the receiver and the bolt actuates back and forth with the charging handle. Even the dust cover is held on with recoil spring tension. Two screws secure the stock to the receiver. Note the sling swivel. 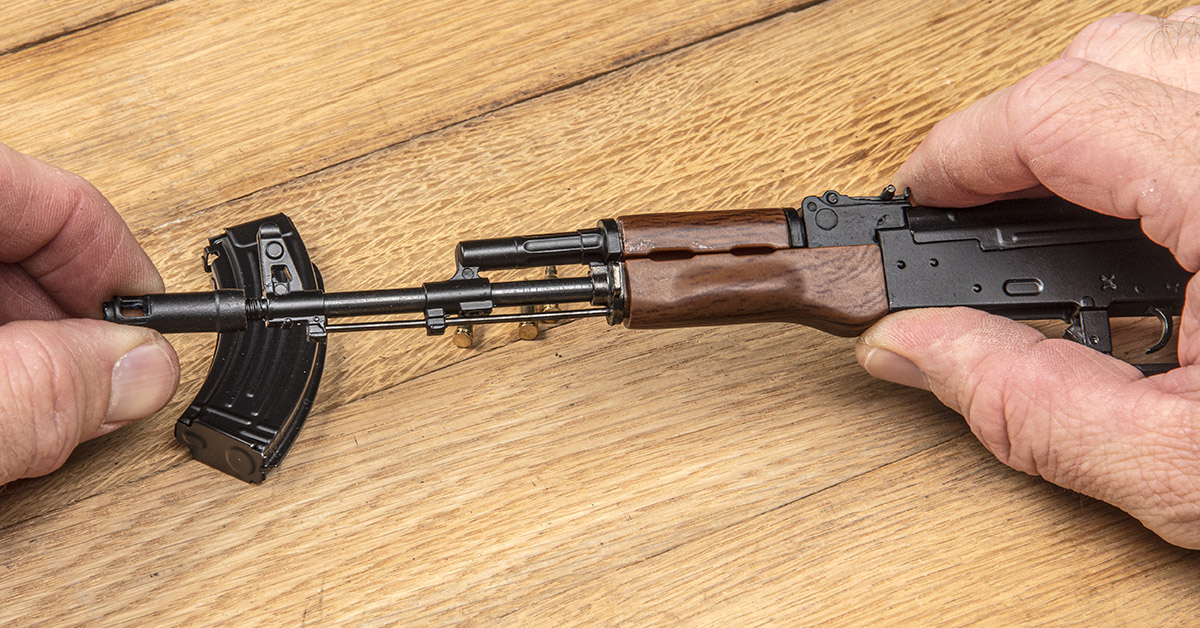 The muzzle device is a separate piece that screws onto the end of the barrel. The only challenging part of the installation was inserting the cleaning rod through the gas block lug. That required tapping it into place with a small hammer. 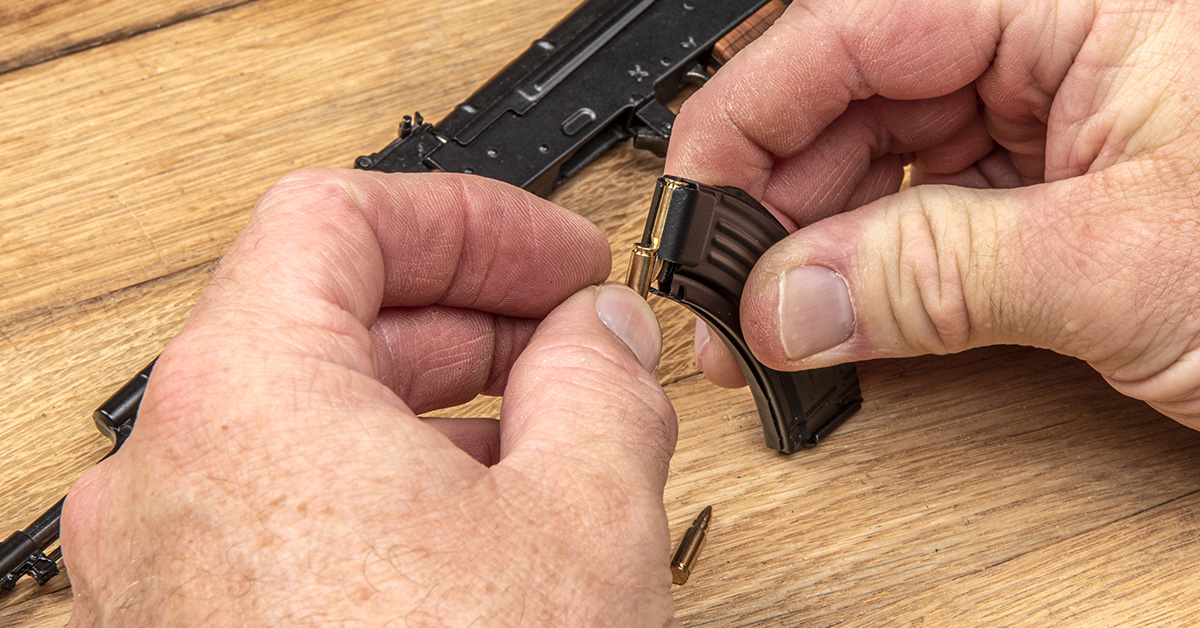 Each Goat Guns replica comes with three dummy cartridges that fit smartly into the magazine. Another impressive detail…the magazine goes into the receiver with the same hook-and-pivot motion as the real deal. And, yes, the magazine release lever is spring-loaded. 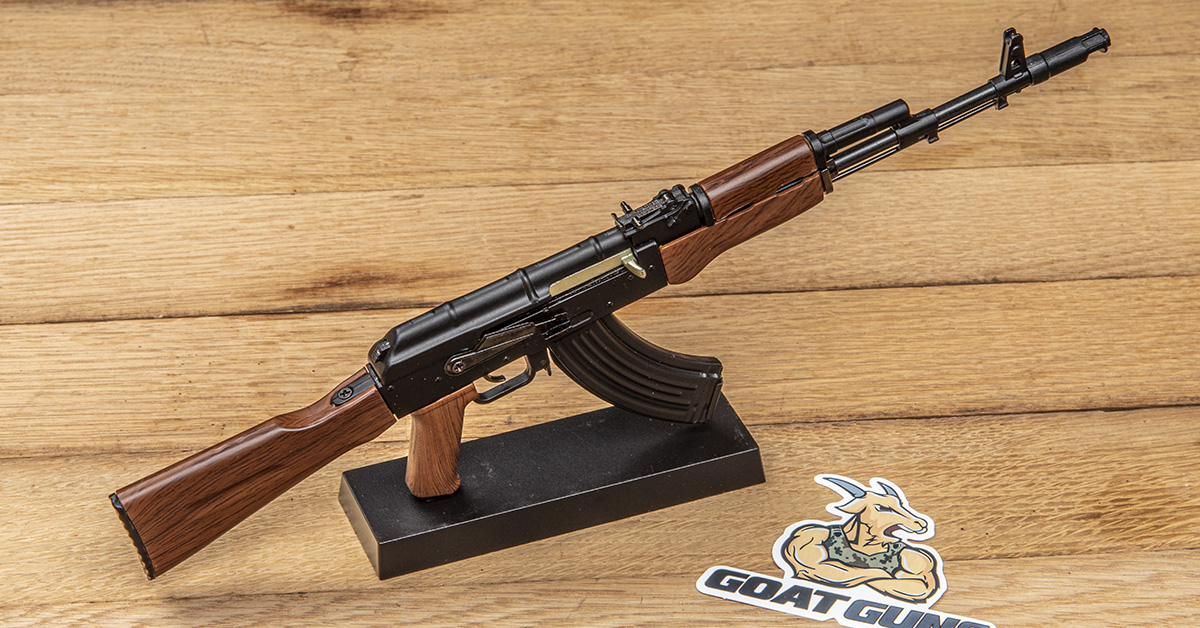 Other key parts also function, such as the trigger, selector lever, and the rear sight. 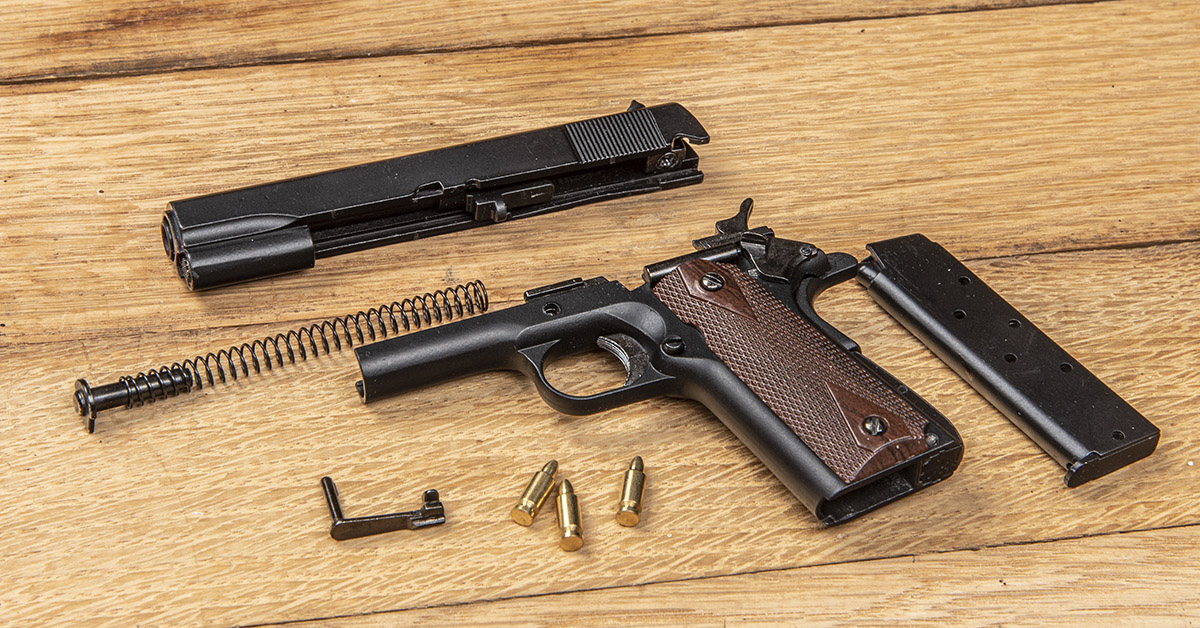 The Mini 1911 is not as complicated as the Mini AK, yet the assembly is true to the original. If you know how to field-strip a 1911, you can put this one together in a minute. Here’s the cool part…everything functions. The slide can be locked back with the slide stop lever, the manual and grip safeties are fully functional, and the hammer pivots. 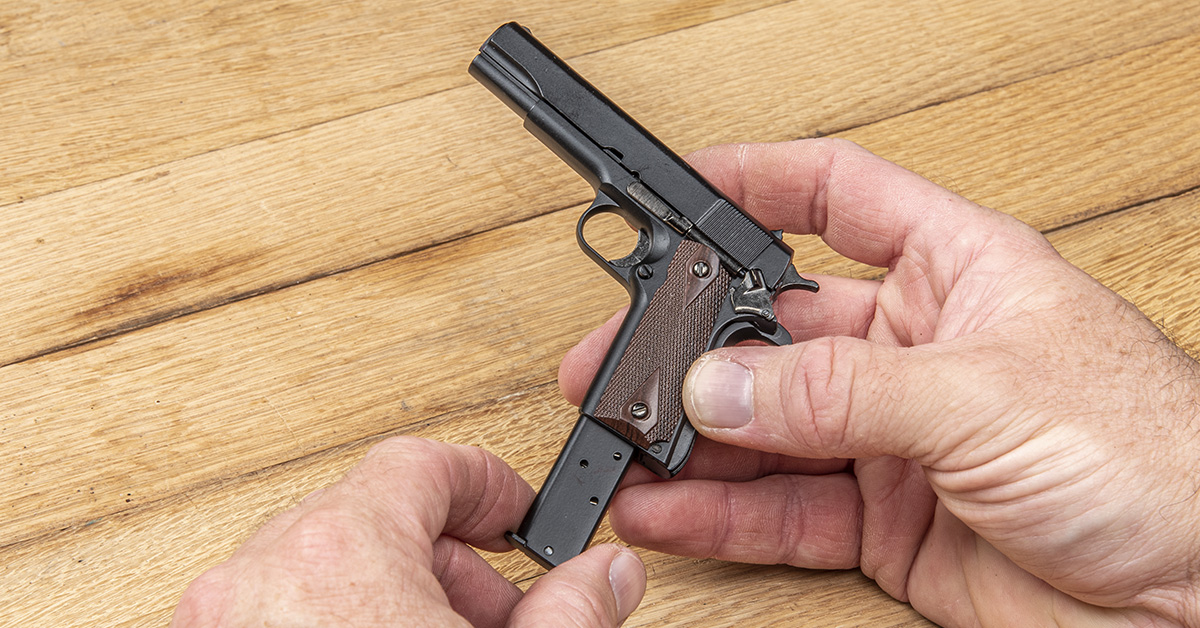 Load the mag with the supplied dummy rounds and insert into the magwell. The mag release button efficiently drops the mag. Once assembled, the Goat Guns can be displayed anywhere by installing them on the included presentation stands. When you’re stuck at the desk, at least you can fidget with these models and daydream.

Goat Guns range from $29.99 to $44.99. The company also offers several accessories, such as miniature holster for the 1911s, display “floor” and wall racks for multiple models, miniature tactical vests, and additional dummy rounds.

We can think of many cool Father’s Day gifts, but for the price and the year-round enjoyment, a Goat Guns replica may be the one to beat.