I’ve heard the phrase more times than I can count. I’ve even uttered it myself. There are typically several reactions to this advice—most internal. In no particular order:

“Oh yes, dry firing is critical.” Though I really should do that myself.

Of course, there are all kinds of variations, excuses, and mental battles fought over this topic. Even so, I’ve yet to find a serious competitor who thinks dry fire, as long as it won’t hurt the gun, is a bad idea.

What is Dry Fire?

Dry firing means going through the firing process without live ammunition. This may include the use of dummy (inert) rounds, laser trainers, or nothing in the gun at all. Dry firing can be very beneficial. Although it lacks recoil, you can still work on fundamentals like trigger control and do so from almost anywhere, at no cost. There are some guns that aren’t meant to be dry fired. This generally applies to rimfire and air guns. When in doubt, use a dummy round or snap cap, if applicable.

The process is simple. First ensure the gun is unloaded and pointed in a safe direction. (When dry fire training, it’s best if there’s no live ammunition in the immediate vicinity to avoid a potential mix-up.) Walk through your shot process as you normally would. This means having all your gear on as you would normally have it for whatever discipline you are shooting. While dry firing is of great value to competitors because of ammo cost savings, you do not have to compete to take advantage of its benefits. Training for self-defense or getting used to the feel of a new gun are other great use cases.

With the rise of technology and the escalating price of ammunition, more shooters have taken an interest in digital training tools that provide more and better results than basic dry firing alone. Some tools are as simple as laser cartridges. Others are as complex as high-speed cameras tracking your every movement. 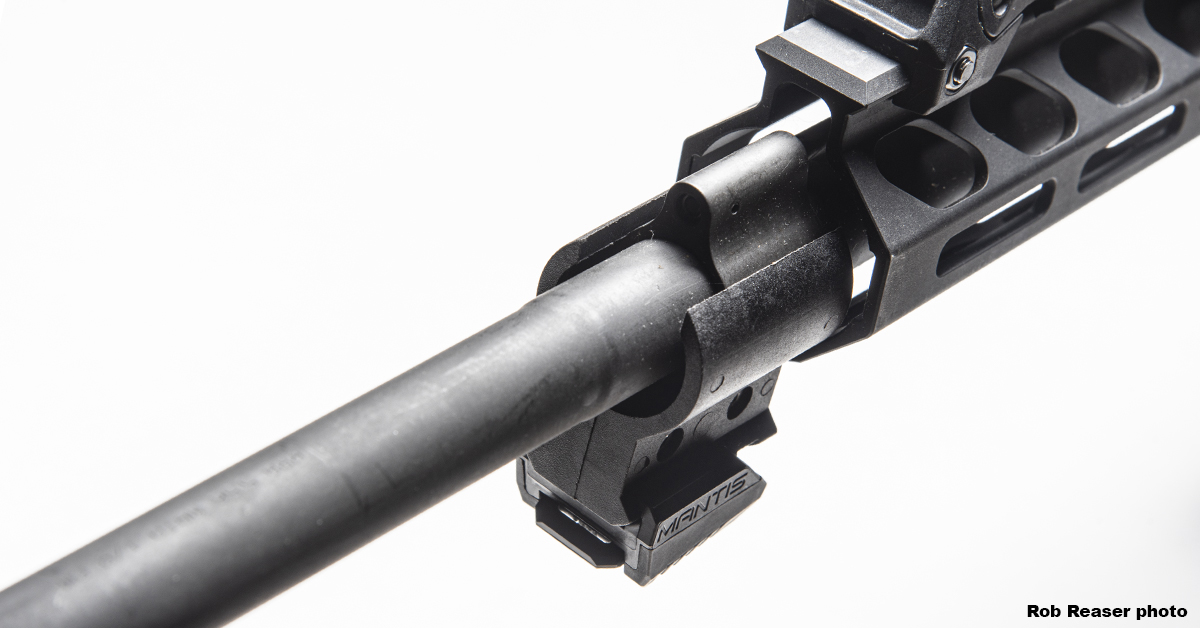 Somewhere in the middle is the Mantis X system—a product that has caused the firearms industry to take notice. The Mantis X is a small device that attaches to your rifle, pistol, shotgun, or bow and offers various dry- and live-fire training drills through a corresponding app on your mobile device. While a useful diagnostic and training tool, not everyone prefers this method, wanting to do things the old-fashioned way or having different needs. You can go here to check out our review of the Mantis X system.

Now Mantis takes its innovative technology to a new level with the Mantis Blackbeard for AR-15s.

The Mantis Blackbeard is an AR auto-resetting trigger system—an astounding piece of technology with appeal for any AR shooter. This system can be used in conjunction with the Mantis X shot tracking system, but it is also a standalone dry fire tool. 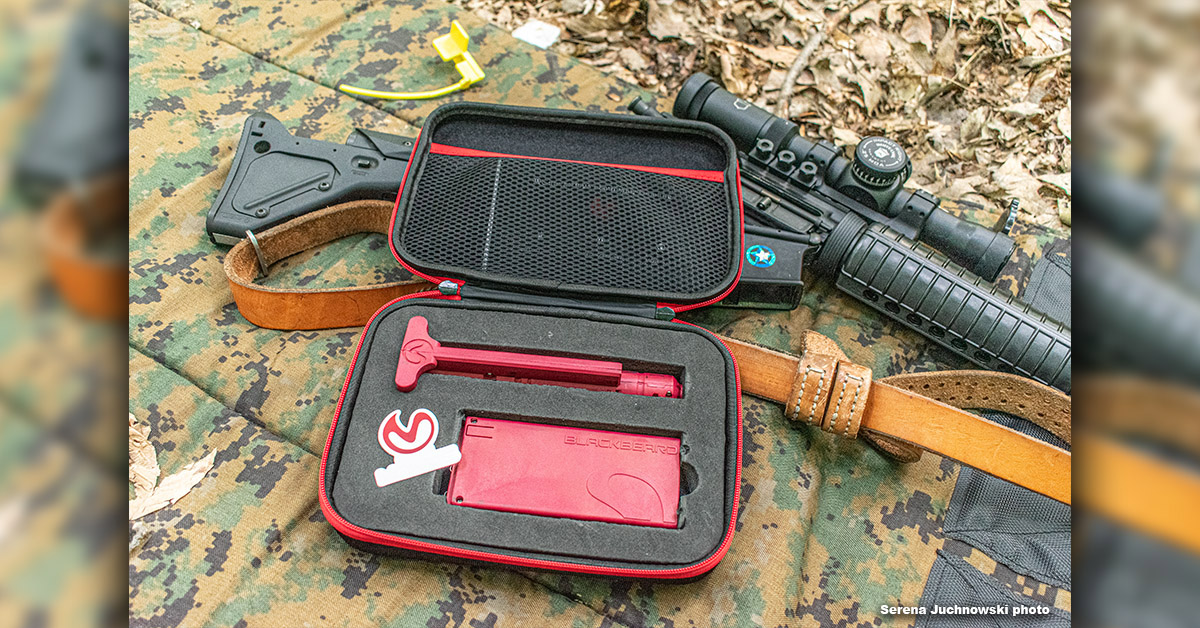 One of the biggest problems shooters have faced in dry firing semi-automatics is having to manually reset the trigger for each dry fire “shot.” The Blackbeard system offers the solution. The Blackbeard is a two-piece system consisting of a replacement bolt carrier group (BCG) and a magazine power bank. The “magazine” has a micro-USB port and included cord for easy charging.

To be clear, the Blackbeard system is not a modification or replacement of your existing trigger. You keep your own trigger weight, break, and feel—you just don’t have to manually reset it after each trigger pull.

As a service rifle competitor, I found the Blackbeard system of immediate interest. There have been attempts at such a device before, but I’d never had the chance to use any of them. Either way, the fact that I’d never used one or seen one spoke volumes about their popularity. 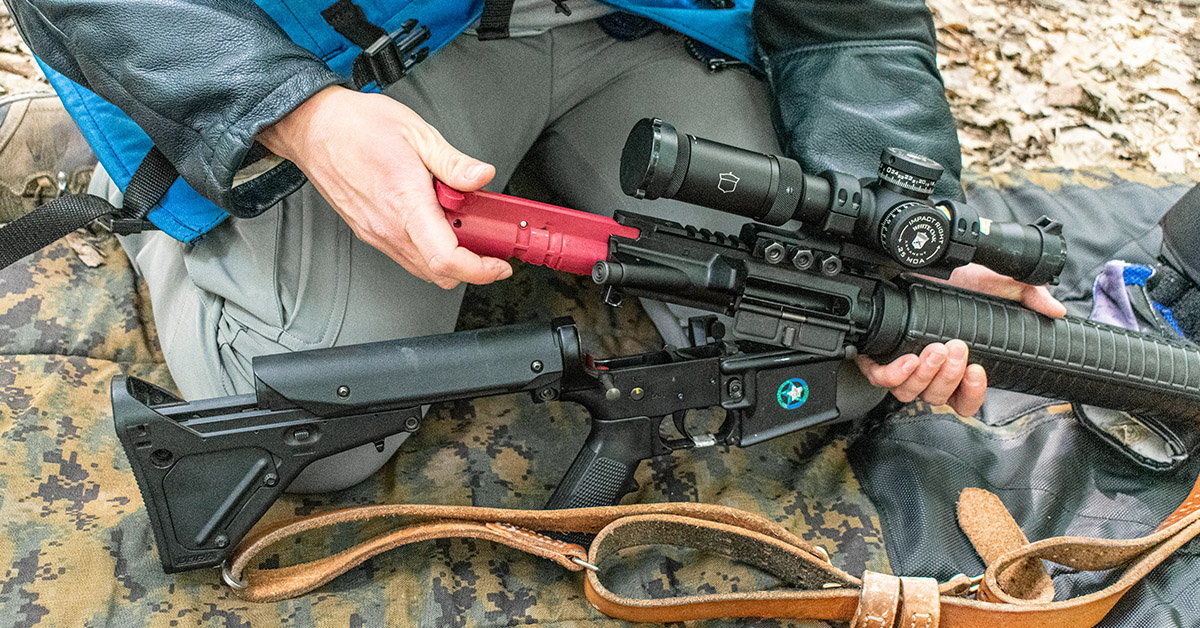 The Blackbeard is different as it offers more than just trigger reset. It is available in four versions: with a red laser, a green laser, an infrared laser, or no laser. I tested both the green laser version and the no laser version in my service rifle. I personally preferred the system with no laser, as I didn’t have anything distracting me in my scope. It also appeared just at the bottom of my field of view. I think the laser versions have their place, but in combination with other laser training systems (like the Mantis Laser Academy) and for 3-gun or defensive shooters. 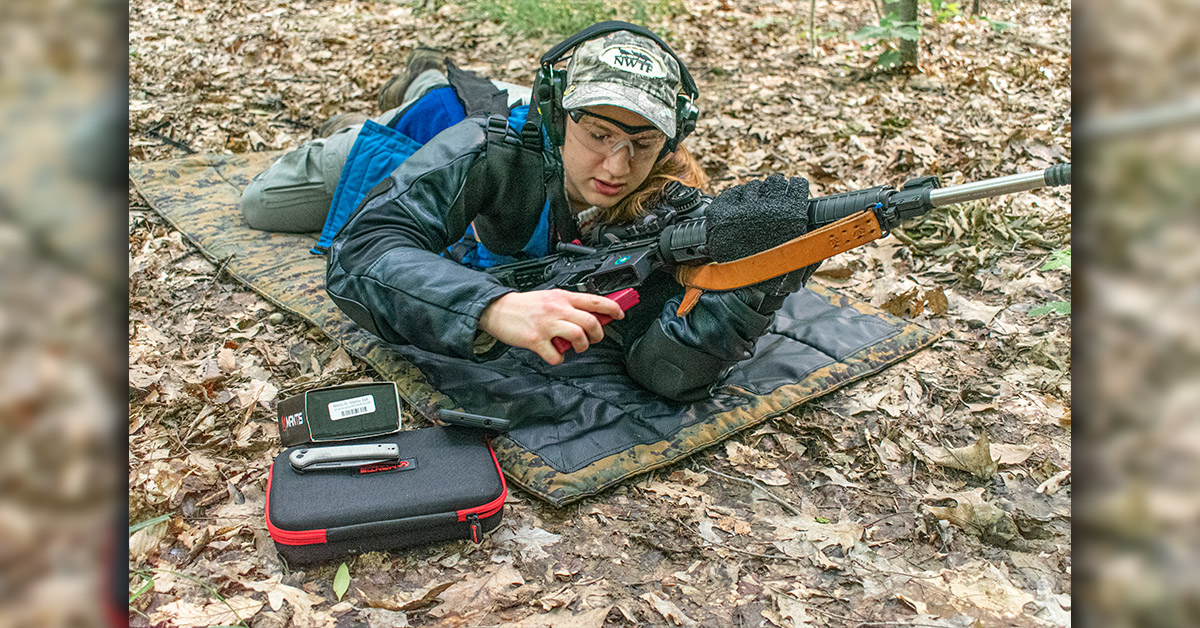 The system is quick to install. Remove your bolt carrier group and charging handle, replace with the Blackbeard BCG, insert the magazine power bank, and done. It’s that simple. As a bonus, taking it back out serves as a reminder to clean your bolt and chamber (which you should do after every range session). The replacement BCG clicks into place while the magazine/power bank smoothly slides in and falls straight out when the mag release is pressed. No matter what angle I tried, it didn’t get stuck.

One of the challenges service rifle shooters have faced is finding training tools that don’t involve 30-round magazines. Most shooters tend to use 20-round mags for service rifle (a 30-round mag can get in the way), so I was thrilled to learn Mantis designed their power bank magazine this way for that very reason. The system arrives in a rigid, synthetic zippered case with foam cut aways for the bolt carrier group and magazine. Picking it up for the first time, I was impressed with the weight of the power bank. It felt just like a full magazine and similar to the single-round Bob Hahin sled I use in offhand. This made the experience even more real.

When I first installed the Blackbeard, I heard an audible volley of clicks as the BCG and magazine connected. It took a minute to get used to. My Geissele Automatics trigger had a slightly different feel with the system installed, but the stage weights were the same. I quickly realized that the trigger reset and operated just as it always had, only with a minor accompanying noise. 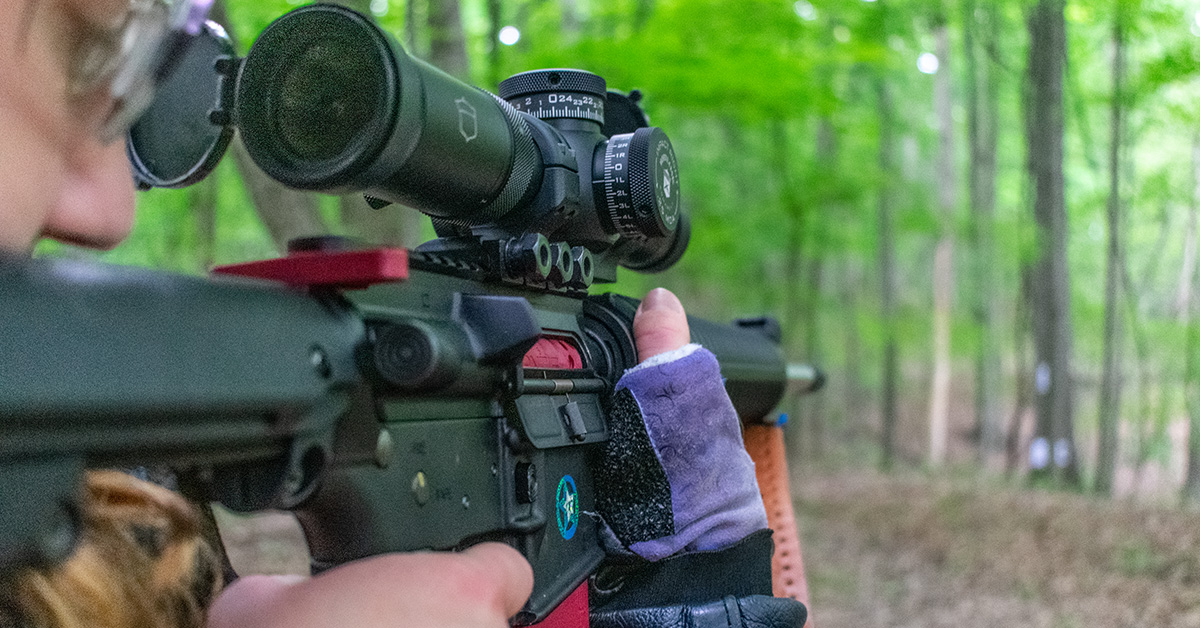 Donning my shooting coat, glove, ear/eye protection and sling, I went to work. I always try to follow my same shooting process whenever I dry fire to reinforce habit and to make sure the training is as close to the real thing as possible. As silly as it may be to some, this includes ear and eye protection.

I set up targets and used the Blackbeard from the standing, sitting, and prone positions. Not having to reach down and pull the charging handle made a huge difference for me as I did not have to break position to shoot. I normally rest between 200-yard standing shots and 600-yard slow-fire prone shots, but rapid fires are another story. For this reason, I’ve never dry fire practiced a rapid-fire string. I was shocked at how much movement I saw in my sitting position. Without recoil, this confirmed I’m the source and that I have some correcting work to do. In practicing rapid fires, I would dry fire two shots, drop the mag, pick up the same mag, insert it, and dry-fire the remaining eight in the ten-shot string. Running a timer at the same time helped me to see how much time I consistently used. 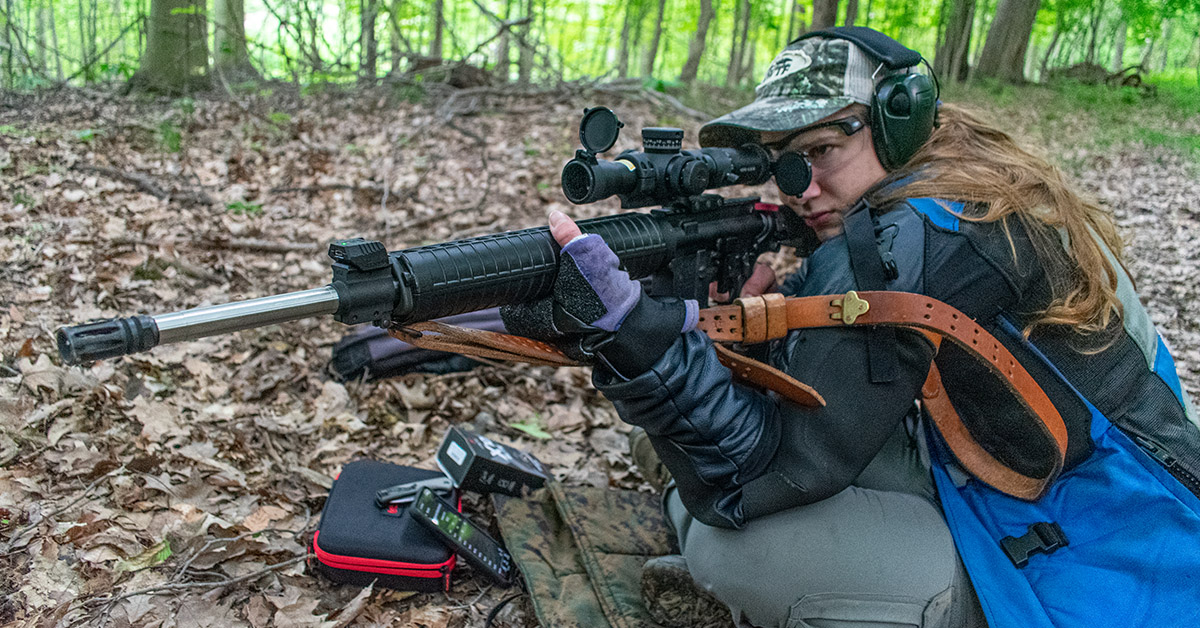 The Mantis Blackbeard system allows you to fire up to 10 shots per second while a full USB charge of the unit lasts for about 75,000 shots. Honestly, I’m not sure I would ever need to fire 10 rounds per second, but the capability is impressive. I also utilized the Mantis X10 Elite during the process. At my current level, it wasn’t especially helpful as it offers more basic data and drills that aren’t service-rifle specific. SCATT systems are far more expensive but provide much more data. They allow you to dry fire a virtual match at a range of distances, recording score and trace. The Blackbeard system, though, can also be used with SCATT. 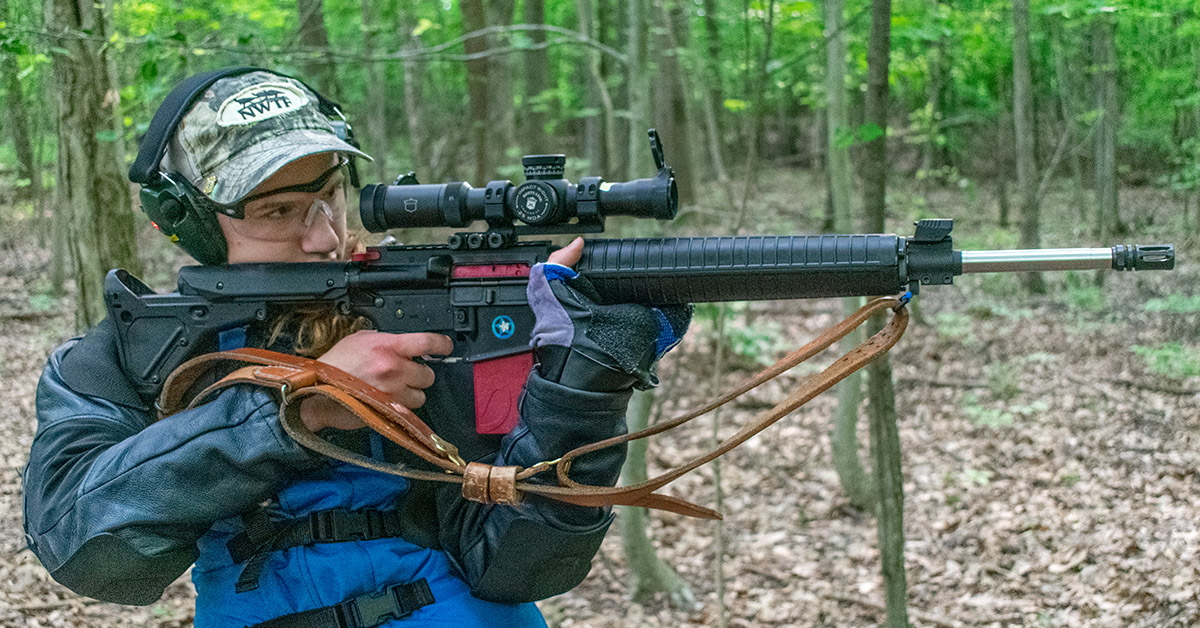 Overall, I am a huge fan of the Mantis Blackbeard system. It is a fantastic and affordable ($199-$219 MSRP) training tool that allows AR shooters to bring their dry fire training to the next level by making it more realistic. It is especially valuable to service rifle shooters. You will not find a better tool to practice rapid fire. 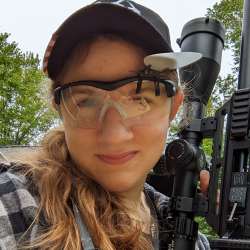