While the design may appear long-in-tooth, CZ’s famed 75 series more than holds its own in the contemporary pistol world

Among my favorite all-around handguns are the CZ 75 variants. The pistols, a product of Ceska Zbrojovka Uhersky Brod, have a broad appeal based on performance, quality manufacture, and ergonomics. The CZ pistol has been copied by many but the clones — usually made to sell more cheaply than the CZ — fall short of the CZ standard. 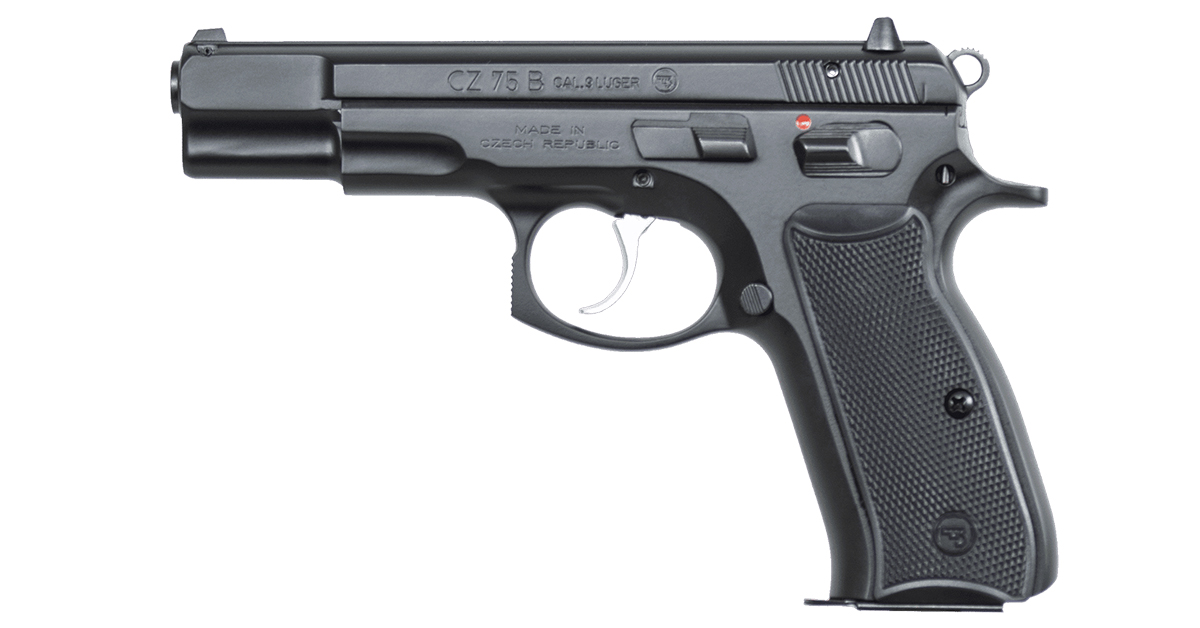 The CZ 75 has, in many ways, been shoved aside in favor of more glamourous pistols and the horde of polymer-frame, striker-fired models. The CZ, though, need take a backseat to no handgun. It has unique features that display maturity of design.

When first introduced (and even to the present time), many have repeated an erroneous description of the CZ 75. Some have stated the CZ 75 is based on the Browning Hi-Power. The CZ 75 is far from a double-action Hi-Power 9mm. The Hi-Power is a great handgun, but the trigger action isn’t ideal from a mechanical standpoint. The CZ, in fact, owes little to the Hi-Power. It is more similar to the SIG P210…but allow the CZ 75 to stand on its own merits. Let’s just say the CZ’s trigger linkage and design are superior to the Browning Hi-Power. The CZ 75 features a high-capacity 9mm magazine and double-action trigger. Introduced about the same time as the SIG P220 and Beretta 92, the CZ was originally manufactured behind the Iron Curtain. As a result, clone guns made it to this shore long before the real CZ 75.

The CZ 75 was a pleasant surprise once we were able to obtain them in the U.S. As a bonus, the CZ 75 proved affordable and remains one of the best buys in the 9mm world today. 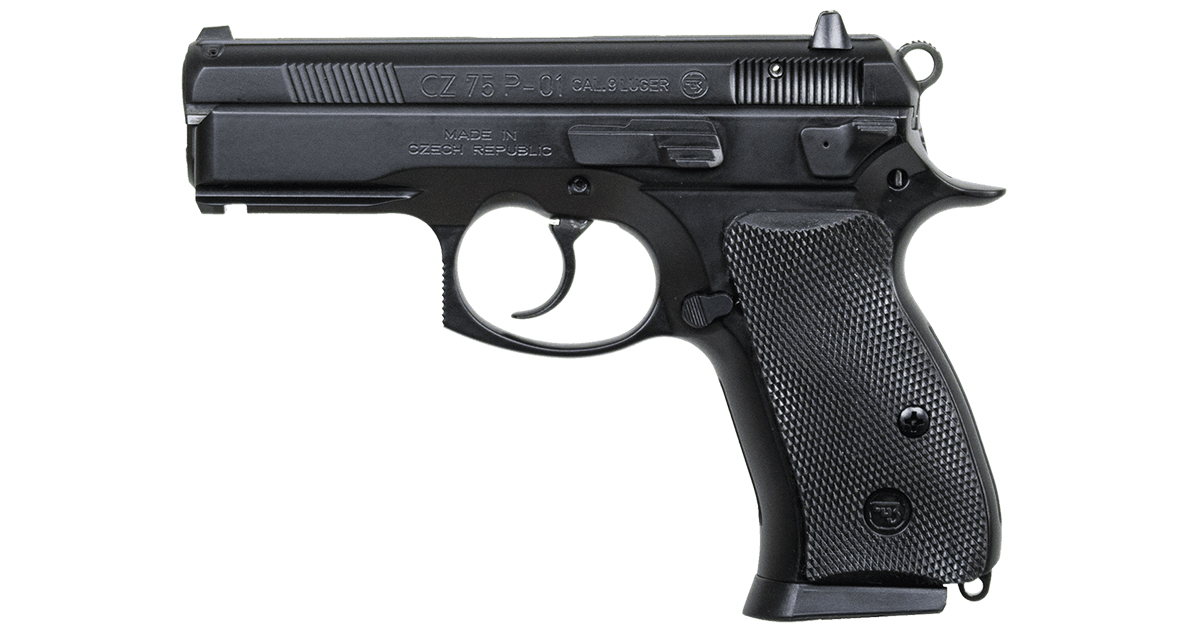 The CZ 75, in the fashion of the SIG P220 and Beretta 92, was soon offered in a compact version. Another version of the pistol, while shorter than the original, is a highly developed service pistol. If the CZ P-01 isn’t the top 9mm service pistol in the world, it is among the top three. The pistol was designed as a police pistol and service handgun. The CZ P-O1 is similar to the CZ 75 in that it is a double-action first-shot locked breech 9mm.

There are also significant differences. The CZ P-O1 frame is shorter than the CZ 75 and features a light rail. The slide and barrel are shorter, and while the grip is also shorter, the magazine accommodates 15 cartridges.

The CZ P-01 features a frame-mounted de-cocker. This de-cocker is easier to manipulate than a slide-mounted lever. The CZ 75, in its original and still current rendition, requires the hammer be manually lowered to make the pistol safe. The new design was required by the Czech National Police. Most agencies the world over will prefer the de-cocker-type action. The pistol, not incidentally, is approved for NATO service. Each is marked with the NATO inventory number.

The P-01 underwent a tremendous amount of proof testing. The pistol was disassembled and reassembled thousands of times. Extreme heat and cold were part of the test. Safety testing was undertaken without failure or accidental discharge. Firing tests were extensive.

When I obtained my first P-01 and began testing the pistol, I found a handgun that didn’t have any disadvantages compared to the primogenitor. The trigger action is smooth. The single-action trigger allows exceptional control and accuracy potential. The frame is a monolithic design that extends to the muzzle. The slide of the CZ pistols runs inside the frame in reverse of the usual handgun design. This means the long bearing surfaces are tightly mated. Accuracy potential is high.

The P-01 operates like most double-action first-shot pistols. A press on the trigger results in the trigger moving to the rear against a drawbar that both cocks and drops the hammer. The pistol fires and the slide cocks the hammer for subsequent single-action shots. The double-action press is about twelve pounds. The clean single-action trigger registers 4.5 pounds with little creep and exhibits the slight backlash characteristic of the CZ trigger.

While many shooters find the striker-fired action easy to use, and DAO types simpler to use, the double-action first-shot pistol has appeal. Firing on the range is one thing. Handling and carrying a handgun day in and day out is another. The heft and balance of a handgun are important. While all handguns must be handled safely, the pistol may be carried with confidence that a trained shooter is unlikely to have an accidental discharge. The pistol may be placed along the bedside with confidence. There is no safety to disengage. The double-action trigger is long but smooth. A trained shooter may make X-ring hits well past seven yards. The single-action trigger allows precise shooting well past 25 yards.

Reversed slide rails mean the slide rides lower in the frame than most double-action pistols. This design feature results in a lower bore axis than many double-action pistols. Muzzle flip is reduced. While the SIG P 229 may shade the CZ in absolute accuracy by a small margin, the CZ is plenty accurate for personal defense and service use. The factory sights are also well designed for defense use. I added a set of HiViz sights. This resulted in greater visibility and speed during combat drills. While the sights offer rapid acquisition, they also deliver good hit potential at extended ranges. CZ has claimed that the monolithic construction of the CZ P-01 results in greater accuracy than that of the full-size CZ 75. I agree.

The original CZ 75 pistol features a frame-mounted safety. The safety may be placed on with the hammer cocked but may not be moved to safe with the hammer down. I don’t believe the Czech designers meant for the pistol to be carried “cocked and locked.” Rather, the safety was intended to be placed in the “on” position during tactical movement after the pistol had been fired with a double-action first shot. This allows safe movement without lowering the hammer.

Once the pistol was widely distributed, it was used by police forces as well as military. For institutional and private use, most prospective purchasers preferred the easier administrative handling of a de-cocker. The de-cocker was also added to the CZ P-01. Simply press the de-cocker lever downward and the hammer is safely lowered without touching the hammer or the trigger. Some find the shorter grip with its smooth S curve is better suited to their hand size than the full-size CZ 75.

The P-01 is reliable with a wide range of ammunition. Like all quality handguns, the P-01 prefers one load to another. Among the most accurate loads tested is the Hornady 124-grain XTP. I have fired several five-shot groups at a long 25 yards that clustered into 2.2 to 2.5 inches. Other loads have given 2.5- to 3-inch groups — statistically close. The CZ P-01 is a bit more accurate than the original CZ 75, more accurate than most Hi-Power pistols, and similar to the Beretta 92 in accuracy potential. This is a good place to be. 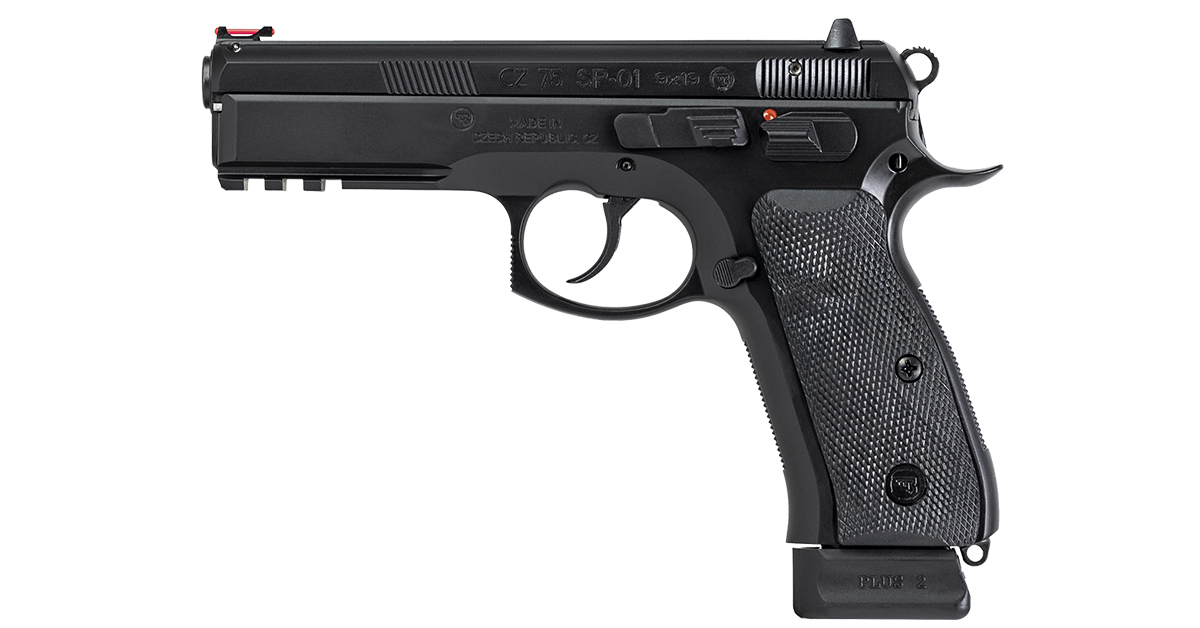 It is interesting that after the introduction of the P-01, CZ introduced a heavier version of the pistol with a full-length slide and grip frame. The SP-01 is also marked CZ 75 Tactical. This pistol is based on the P-01 improvements. The SP-01 is much heavier than the P-01 at 40 ounces. The SP-01 features a fiber optic front sight which aids in fast shooting. The pistol has the same action as the other CZ pistols…no surprises there. The grip geometry is a bit different.

The great advantage of the SP-01 is weight — and this is also the disadvantage. I carry some big guns, most often a Government Model .45. The SP-01 is just too large a carry gun for me. On the other hand, as a house gun, you have a sweet-shooting pistol with very modest recoil. There is no softer-shooting 9mm. Mounted with a combat light, you have a superior home defender with 19 rounds in the magazine. The pistol excels when running a combat course. As for absolute accuracy, the CZ P-01 shades the SP-01 just a fraction. The P-01 is an exceptional gun while the SP-01 is a good pistol. If I could have only one CZ, it would be the CZ P-01. I think you may feel the same. 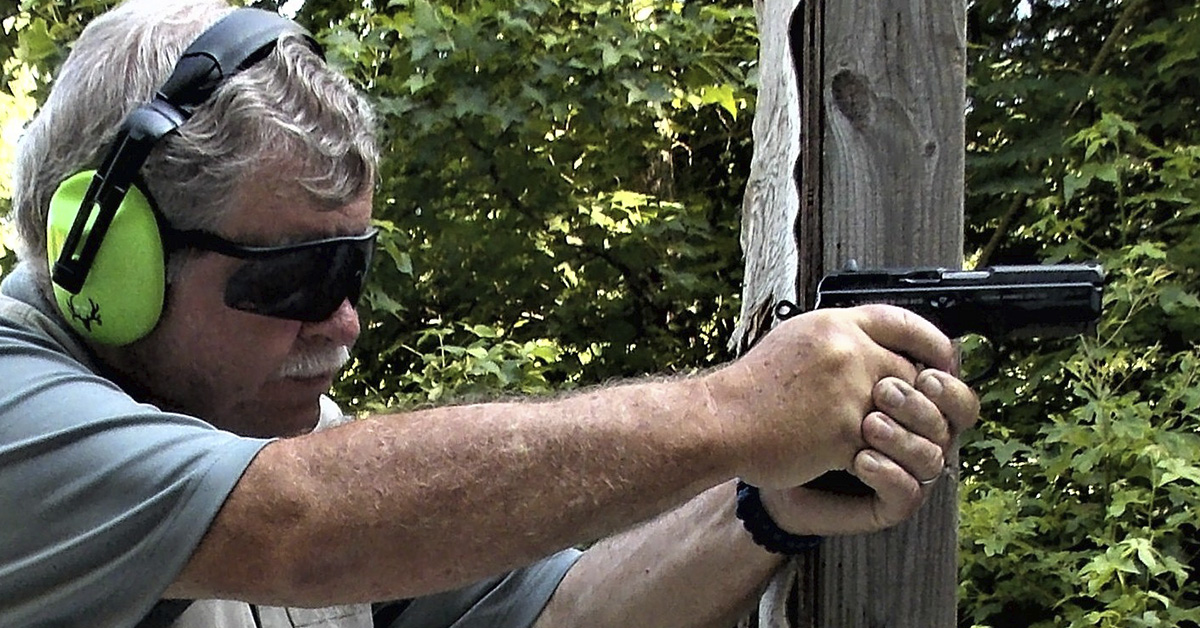