If there was one thing I thought we would never review on Shoot On, it would certainly be a BB gun. We’ve done several air rifle reviews, yes, but those were of the .177- and .22-caliber pellet variety that lend themselves to both small-game hunting and low-cost rifle training.

Occasionally, I would stumble onto a mention of Daisy’s match-grade BB gun. “Match-grade?” I thought. “What kind of matches use a BB gun?” Turns out, 5-Meter BB competitions are a thing, and this sort of competition is an on-ramp for youth shooters who often progress to 10-meter air rifle matches and even collegiate and Olympic competition. The 4-H Project S.A.F.E. (Shooting Awareness, Fun and Education) program implemented by 4-H extensions around the country is the leading force in this 5-meter competition recruitment arena, and Daisy is the spearpoint for the education side, having developed a shooting education curriculum that is used by civic organizations across the country for teaching youth safe firearm handling and marksmanship skills. Daisy even puts on a National Championship match each year.

With our typical mindset of accuracy involving firearms, I figured that “match-grade accuracy” in a BB gun must necessarily be relative. After all, I spent my youth chucking those bright copper balls at anything that would make a good target (including some things I never should have shot at) and often hitting the target was little more than blind luck. Those BBs were notorious for veering off into unpredictable directions — sort of like watching a curve ball coming at you, only in reverse.

Once the 499B arrived, I decided to go all-in on the evaluation and ordered a pack of official NRA 5-Meter BB Gun targets with the intention of shooting the air rifle at exactly five meters, or about 16 feet, 4-3/4 inches.

The 499B obviously has the legendary Daisy Red Ryder in its DNA. From the lever action and stamped steel construction to the classical wood buttstock and foregrip, the 499B clings to its familiar heritage. But as Red Ryder alumni (that’s most of us) will note, there are some distinct differences compared to the air gun of our youth.

Note that there is no magazine tube, so there is no pouring BBs into a magazine (and onto the ground). The 499B is a single-shot air rifle; actually, it is a muzzleloader. To load the rifle, you must place the gun on SAFE, cock the lever action, and drop a single BB into the barrel.

I’m not sure what the mechanism is that keeps the BB in place, but I had a bit of a challenge in reliably seating the little balls. After dropping the BB into the barrel, tip the muzzle down. If the BB rolls out, drop the BB back into the barrel and try again. I got into the rhythm of giving the stock a few taps with the muzzle pointing up after loading the BB. This would usually seat the projectile.

Daisy recommends using only their Precision Max BBs for ultimate accuracy. I only had an old tube of their standard Quick Silver BBs (about 25 years old) and a bottle of some Crosman Copperheads I picked up at the local Dunham’s. Not using the Daisy Precision Max may have contributed to my loading issues. 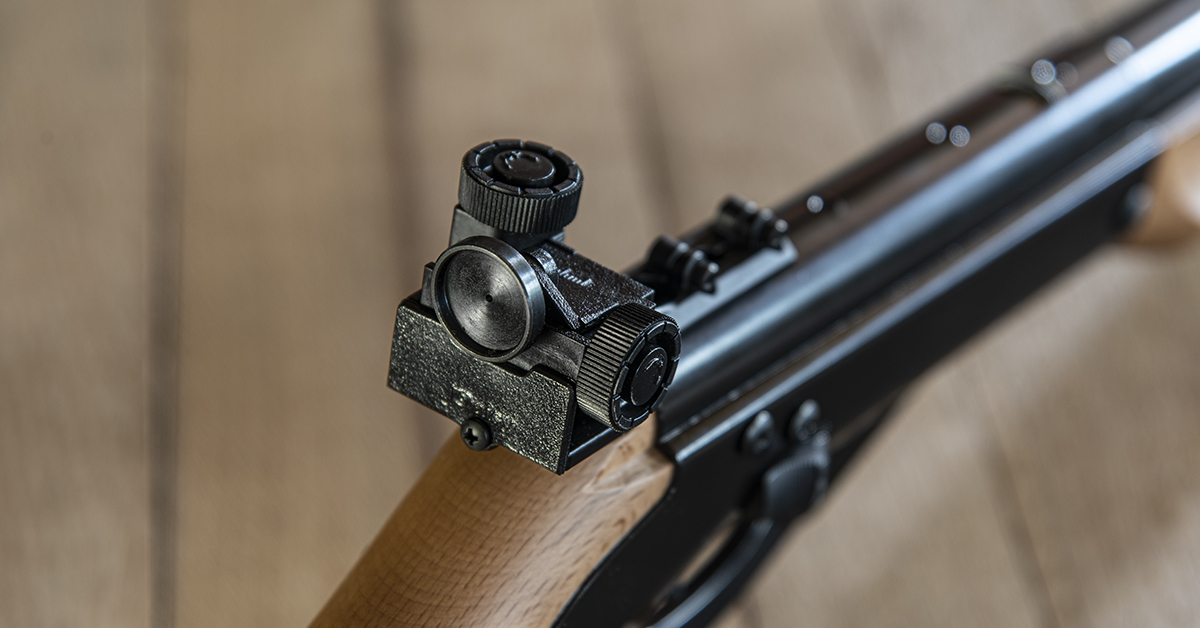 Being a target air rifle, the 499B dispenses with the old-style elevation ramp rear sight and instead uses a windage- and elevation-adjustable target peep rear. This sight comes uninstalled with the air gun. Installation is simple enough. Just slide the sight assembly onto the receiver rail and clamp into position with the two integrated clamping screws. That’s it.

The elevation and windage knobs make zeroing at five meters a breeze. The only challenge I had was in the elevation department. I originally had an aperture front sight on the gun (more on that in a moment), and with that sight configuration, the elevator bottomed out on the sight housing before I could achieve my needed elevation setting (the gun was shooting a tad too high). 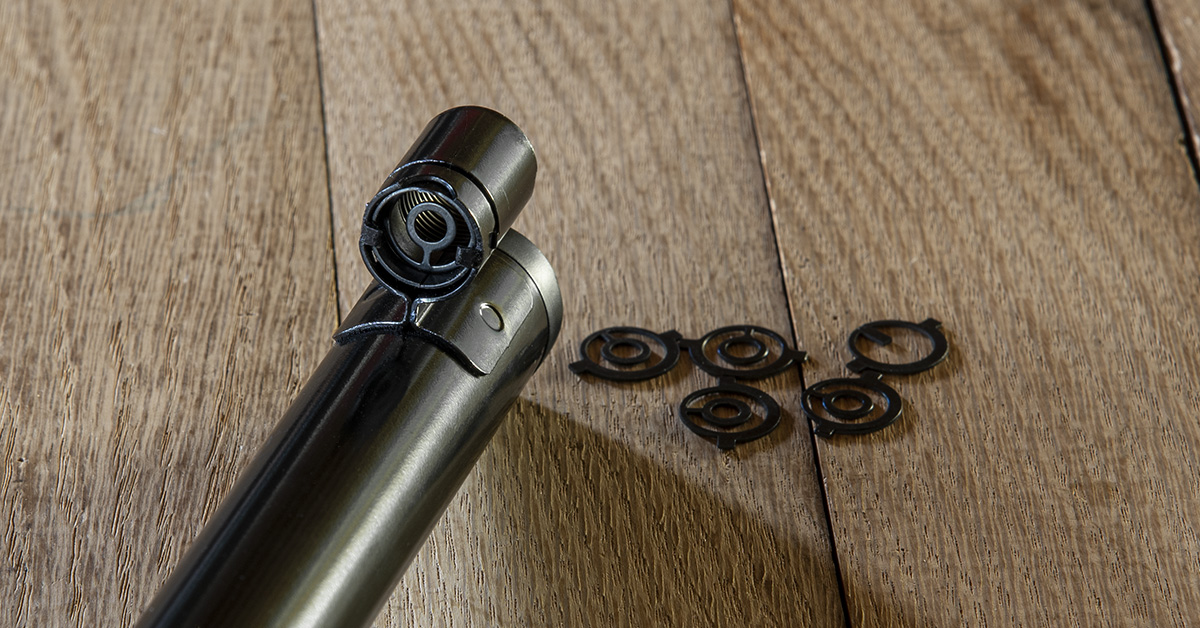 Fortunately, the 499B comes not only with five front aperture sight inserts but also one post front sight insert. These sight inserts are held inside the front sight shroud at the end of the barrel with a spring system. To change the inserts, push in on the spring and pull out/insert the desired sight.

Curious to see if the front post sight would provide the point-of-aim/point-of-impact I was looking for, I replaced the aperture front insert with the post insert. That change did the trick and the rifle zeroed perfectly at five meters.

As it turned out, I liked the post sight insert much better because it matched the sight picture of my open-sight ARs. Should you wish to use the 499B as a trainer, it may be a good idea to use the front post insert rather than the aperture-style front sight since the former offers a sight picture compatible with most firearms.

Overall operation of the 499B is straightforward. The lever action is light enough for youth shooters to cock without struggle and the safety selector is conveniently located above the trigger on the right side of the receiver. The safety position detents are positive enough so the button stays in place and moves easily enough for small fingers to manipulate.

While the 499B is a youth air rifle by intent, adults will have no trouble with the ergonomics. The length of pull falls within the standard firearm range of 13.25 inches and the sizeable forend accommodates shooters of all sizes. 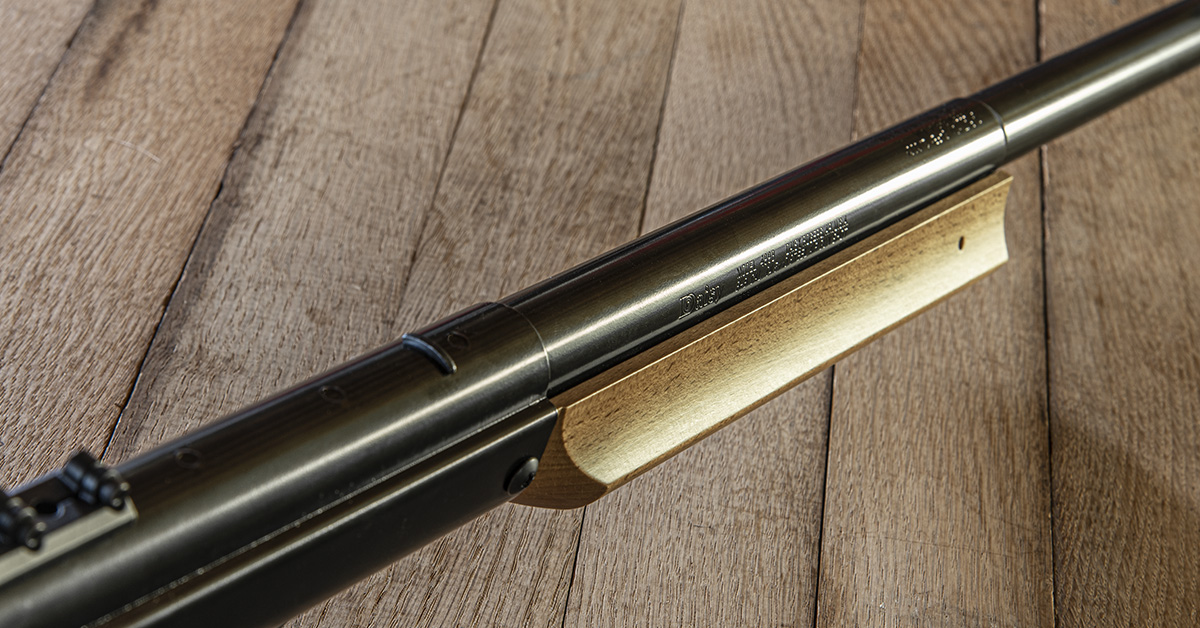 The forend has a profile that target shooters will appreciate. The deep contouring along the sides provides a solid, no-slip grip and the flat bottom facilitates a palm rest when shooting from the standing position. 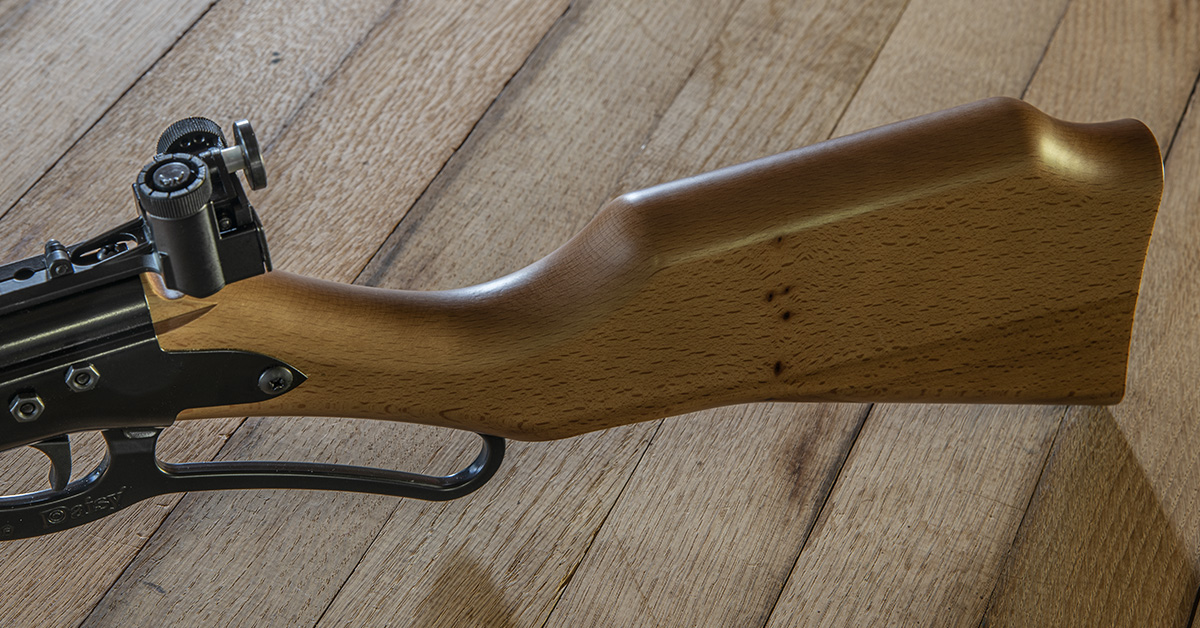 Another variation from the original Red Ryder is found in the buttstock. The 499B comes with a Monte Carlo-style stock that delivers a good cheek weld and eye position for most shooters. The one feature we could recommend is a slip-resistant butt plate. The stained hardwood stock looks and feels great, but that slick finish allows the buttstock to slip on the shoulder while aiming. A thin piece of rubber or some skateboard tape across the back of the stock would cure this.

After becoming familiar with the 499B and getting the sights zeroed, I set up my back-of-the-shop range for five meters. To be honest, the idea of shooting a target at a mere 16 feet and some change seemed almost silly. That was until I began pulling the trigger in an earnest attempt to keep my 10-shot strings in the black of the official NRA 5-meter target bullseyes. 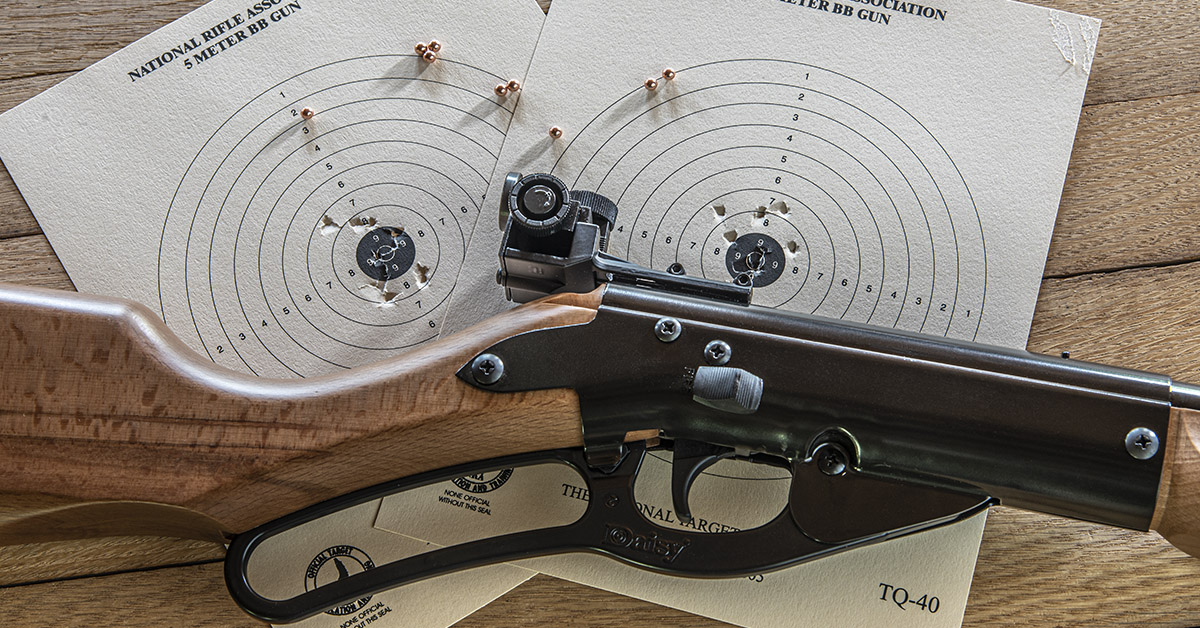 Two things stuck out from the get-go. First, the feather-light weight of the 499B (3.1 lbs.) amplified every breath, twitch, and pulse of my body. Keeping the front post centered in the rear sight and on the bullseye was a challenge. Second, the easy and smooth trigger pull, with no anticipation of recoil and loud BANG that would accompany a centerfire rifle, really allowed me to focus on my trigger work and aiming. This is something I never paid much attention to during centerfire rifle or pistol training (recoil and noise, not trigger pulling and aiming!), but its absence let me better home in on these individual aspects of marksmanship.

Short story, I realized that even on a 5-meter range, the 499B is a worthy trainer regardless of age or experience. What’s more, the low velocity of the BBs (240 fps) combined with a capture-style target makes this a viable practice tool that can be operated in most any environment — even indoors.

As for accuracy (shooting non-recommended ammunition), I can’t really say how the 499B stacks up because I have no baseline for judgement. A smoothbore is only going to be so accurate, but I thought the gun shot extremely well. It certainly has the potential to shoot tighter groups than I was able to do with my initial testing. I will need to get some Daisy Precision Max BBs and see how they perform.

In sum, the Daisy 499B Champion air rifle is a winner for getting youth involved in competitive shooting and for training youth and adults alike in marksmanship skills. With an MSRP of $175.90, this is a minor investment for a product that can deliver so much fun and valuable lessons for years to come.