Can this new bore solvent play cleanup hitter to the better-known brands that have come before it?

I’m going to state right up front that I am a first-order skeptic when it comes to gun cleaning chemicals. That may not win me a lot of favors amongst the many manufacturers of said chemicals, but there you have it. The reasons for my skepticism are twofold.

First, with so many gun chemical manufacturers putting forth products claiming to be “the best” at whatever function it may be, basic logic proves that to be false because “best” is a singular apex ranking. In other words, “There can be only one…” to quote the 1980s Highlander flick. Ergo, someone (or many someones) is making an unsubstantiated claim.

Second, a good friend and highly experienced gunsmith whose job was to make and maintain precision firearms for world-class competitive shooters explained to me once that the science has basically been settled long ago on what’s needed and what has proven time and again to work when it comes to firearm chemicals. While he never discounts outright that something new and better might come down the pike, every new product must also be weighed by several factors. These include cost and unintended consequences, such as biological impact on the user (harsh smells, skin irritation, etc.), impact on non-metal components such as wood, plastics, finishes, the degree of improved effectiveness over proven chemicals, and so on.

As a media conduit of firearms-related conversations, I have received many of the hot, new gun chemicals of the year—some by well-known brands and some by company’s that disappeared from the landscape soon after their “revolutionary” new products were released. Funny thing…it wasn’t a month ago that I deep-sixed several boxes of gun maintenance chemicals I had in the shop because they showed zero improvement over the go-to formulas that came before them.

Anyway, you get the idea. Perhaps I’m just an overt cynic on such matters (which I am), but I do try to give new products a fair shake. I didn’t quite do that with the Bore-Max Bore Foam solvent recently introduced by the DIY gun tool gurus at Real Avid. In fact, I set the bar purposefully high (some might say unfairly high) to see if this new product would sink or swim.

Bore-Max is a solvent chemically designed, as they all should be, to remove carbon and copper fouling from barrel bores. In addition, this is a foaming solvent that, by virtue of its physical properties, is intended to reach the sharp grooves, angles, and microscopic irregularities found in a barrel bore arguably better than liquid solvents. At least that is the concept.

The question is, would it actually clean a gun bore as well as or better than our standard go-to Hoppe’s #9?

To find out, I decided to try Bore-Max on my precision long-range rifle—the precious gem of my otherwise motley crew of rifles. Why the .308? Because when I put it to bed last fall, I had scrubbed and cleaned the bore to within an inch of its proverbial life, ensuring the cotton flannel patches were coming out lily white. My reckoning was that if the Bore-Max treatment could pull up any fouling residue after such a rigorous cleaning, then it would certainly prove its merit and earn a place in my cleaning box. 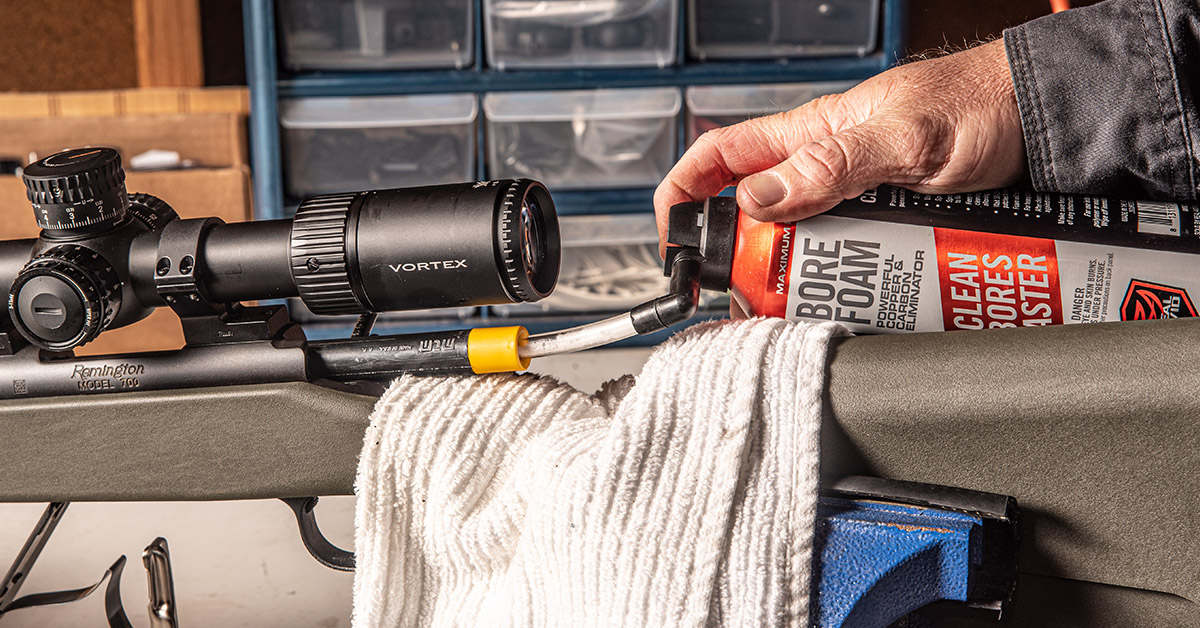 Bore-Max Bore Foam comes in a pressurized 12-oz. can. A 360-degree rotation nozzle fitted with a slightly flexible application tube works perfectly for delivering the foam into a rifle bore via a bore guide or directly into the chamber. The directions call for the barrel to be tilted slightly in a muzzle-down attitude to allow the solvent to slowly work its way through the bore from the chamber end to the muzzle. 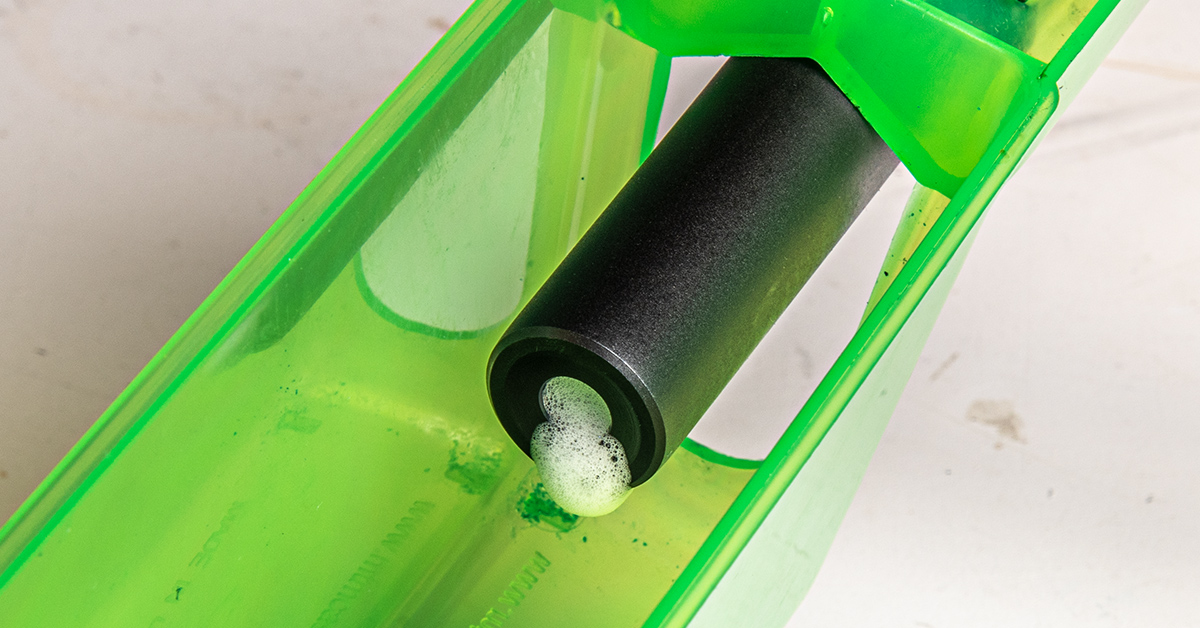 When released from the can, the foaming solvent expands to ensure maximum contact with the irregular bore surface. I squirted the Bore-Max in short bursts until it started to exit the muzzle, and then let it sit for 10 minutes (the instructions say to allow 10-15 minutes for the solvent to act on the fouling). 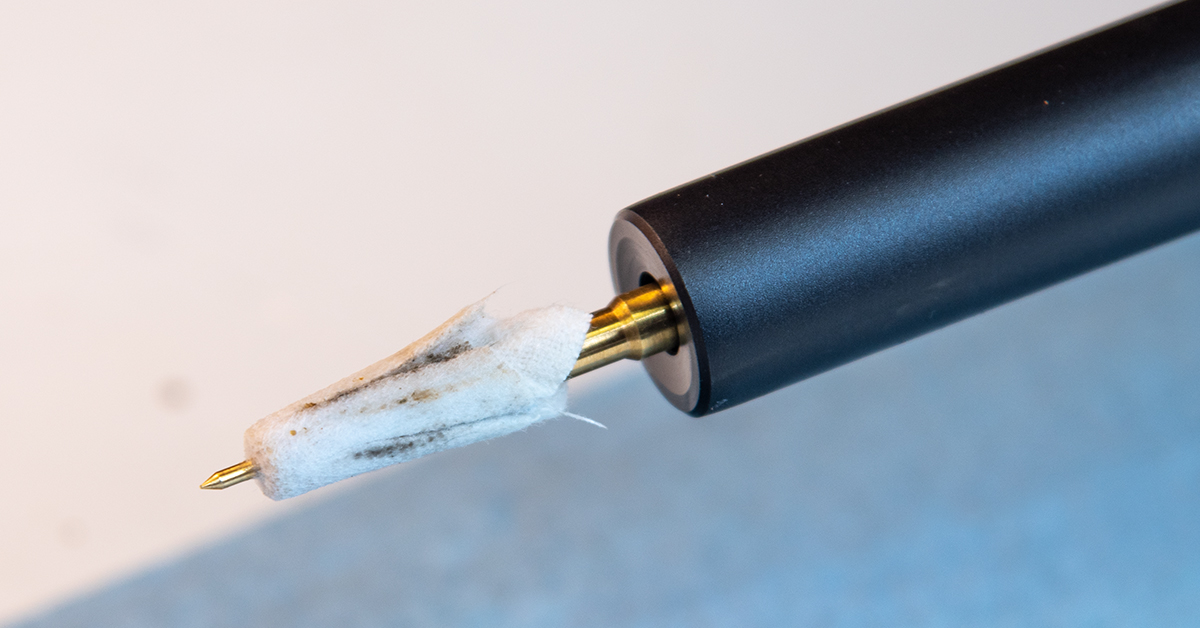 Well…lookie there. After a 10-minute soak in Bore-Max, my formerly-scrubbed-to-squeaky-cleanness .308 barrel wasn’t as squeaky clean as I thought. Bore-Max found some gunk that liberal brushing and a lot of Hoppe’s #9 had left behind (or maybe I’m just REALLY bad at cleaning my guns).

Now, to make this test more challenging, I did not follow the directions that said to scrub the bore with a bore brush before applying the Bore-Max. I wanted to see if the chemical and foaming action alone would pull up any remnant fouling. 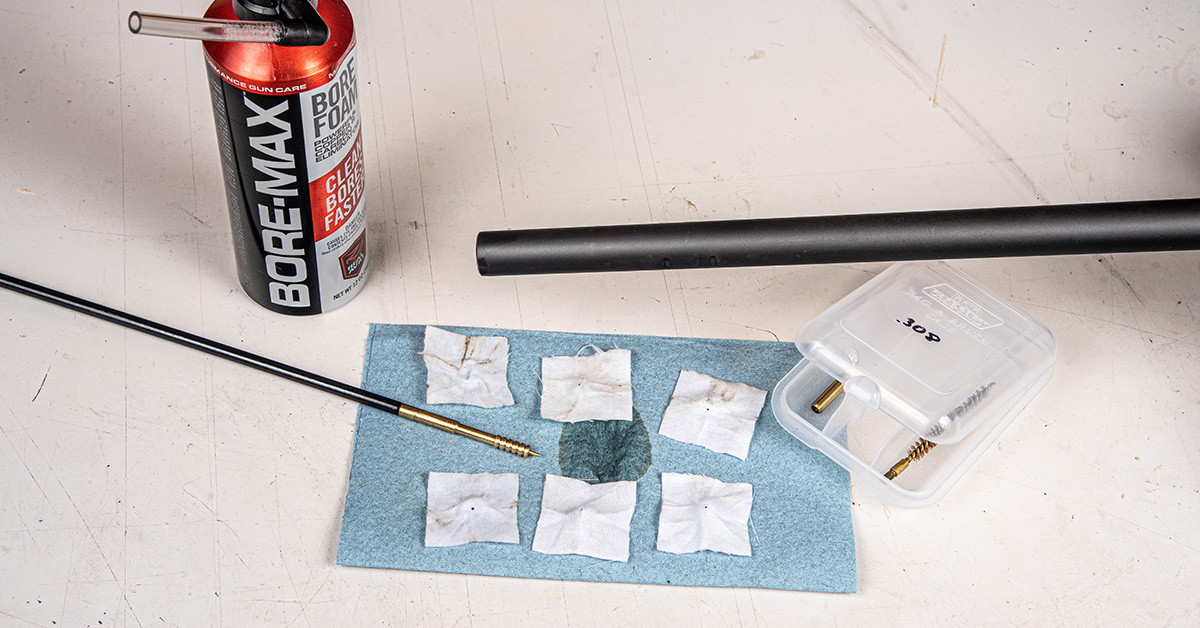 After running the first patch behind the Bore-Max, I sent two fresh patches down the barrel (top row). Since there was still evidence of fouling, I gave the barrel another application of Bore-Max and waited about 12 minutes before checking the results. A slight amount of fouling came up on the next patch pass, just a hint on the following, and all-white on the final (bottom row).

My conclusion? If Real Avid Bore-Max can cleanup hit behind a rigorous Hoppe’s #9 regimen, it earns a justified spot in my gun box.

Build Your Own AR NOW! Pt. 1: The Lower Receiver

AR components are once again in stock. If you’ve ever wanted to build your own AR-15, get …