TenPoint Crossbow Technologies has introduced the reverse draw Nitro 505 as the fastest and most powerful crossbow available today. The Nitro 505 lives up to its name, with arrow speeds often exceeding 505 FPS. Speed ratings are eye-catching and proven with a 400-grain hunting arrow. We’ve just wrapped up an Oklahoma whitetail hunt on the Nitro 505’s maiden hunting voyage and yep…this lightning fast, made-in-the-USA crossbow delivered!

The Fastest Crossbow in the World 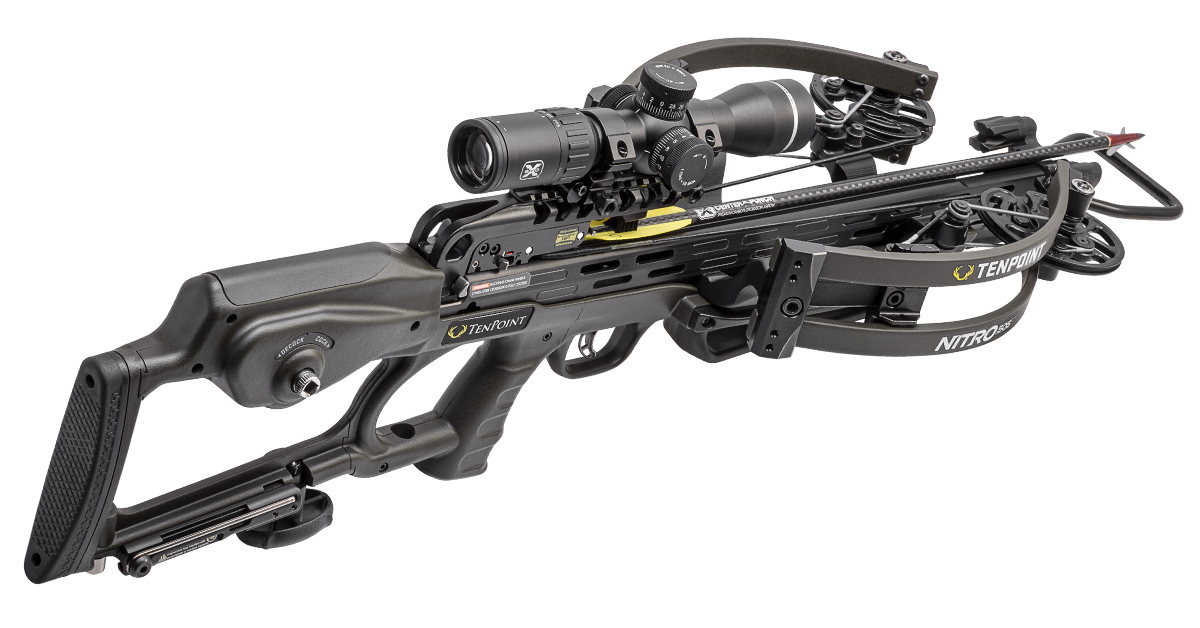 Reverse-limb crossbow technology creates an elongated barrel to produce a longer power stroke. The Nitro 505 leads the pack with a 17-inch power stroke that keeps the arrow on the rail an extra four inches. The result is speeds over 500 FPS, with a mind-boggling 227 foot-pounds of kinetic energy. A full-sized crossbow is needed to generate these incredible speeds, yet the Nitro 505 does so with an ultra-compact 6.5-inch width when cocked and a 30.7-inch length without the stirrup.

To handle and control the extra energy, TenPoint added four additional strands to the string and cables on the Nitro 505. A larger string safely contains and transfers the increased energy but does not fit standard components. The bow assembly is powered by a new RX8-Cam system that rotates an incredible 404 degrees. At 44 degrees beyond full rotation, extra power and speed are generated. The new cam system was designed with deeper cable grooves and improved cable spacing to accommodate the larger string diameter. The changes allow for the increased strand count in the string to ensure it rotates smoothly and consistently while staying contained. The changes mean added strength, damping, and durability to manage record-setting speeds.

Safety remains a design principle, and the TenPoint ACUslide Auto-Brake Gear System allows for silent cocking and secure and controlled de-cocking of the crossbow. Crossbow expertise has progressed to the point where it is difficult to understand why any new bow would not offer de-cocking.

The extra energy of the fastest bow on the market required a more robust brake pad with more robust braking power. The ACUslide and Auto-Brake Gear System ensures the user is always in control. Users can remove their hand from the crank handle at any time and the brake system will hold the ACUslide in place until engaged again. The handle never spins out of control, and safety is always maintained, protecting both user and crossbow. 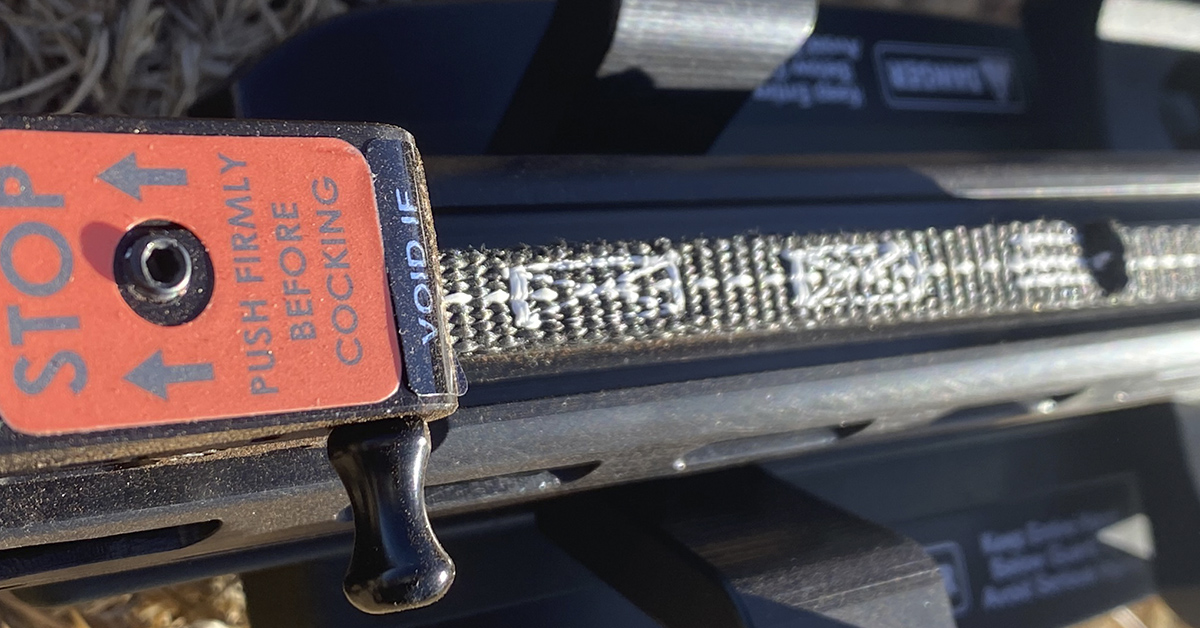 The cocking system has been taken to new strength levels with a Dyneema cocking strap. The unique material will handle over 2,000 pounds of force and is twice as strong as the previous cocking strap. Netherlands-based DSM manufactures Dyneema—an ultra-high-molecular-weight polyethylene. The material exists in long-molecule chains with extra-strong intermolecular bonds, which means it’s the strongest of any thermoplastic and is a super light fiber. By weight, Dyneema is up to 15 times stronger than steel, thus the fastest crossbow uses the strongest fibers to cock and de-cock the bow.

The buttstock of the Nitro 505 is fitted to hold a 7 ½-inch XTEND Adjustable Crank Handle that inserts into a port to run the ACUslide. With the extended handle and extra-strong cocking strap, the effort to cock the crossbow is a mere five pounds.

The Nitro 505 was years in development and was torture-tested to ensure durability, safety, and consistent results. Engineers made several prototype crossbows, and after 25,000 shots, all proved reliable, accurate, and consistent with speed.

“The Nitro 505 is the fastest, most accurate, and most powerful crossbow ever manufactured.” said Rick Bednar, TenPoint CEO. “To exceed 500 feet-per-second and maintain the durability you’ve come to expect from TenPoint, our engineering team was denied no expense in the research, design, and testing phase of this crossbow. All major components were designed to handle this level of power. The Nitro 505 is the most tested TenPoint crossbow ever—with over 25,000 shots put through the design.”

TenPoint has been employing Vector-Quad cable technology for several years. The four-cable system stabilizes the cams and limbs for consistent, repeatable performance. The Vector-Quad cables eliminate cam lean and generate straight-nock travel on the rail for accurate and repeatable results. 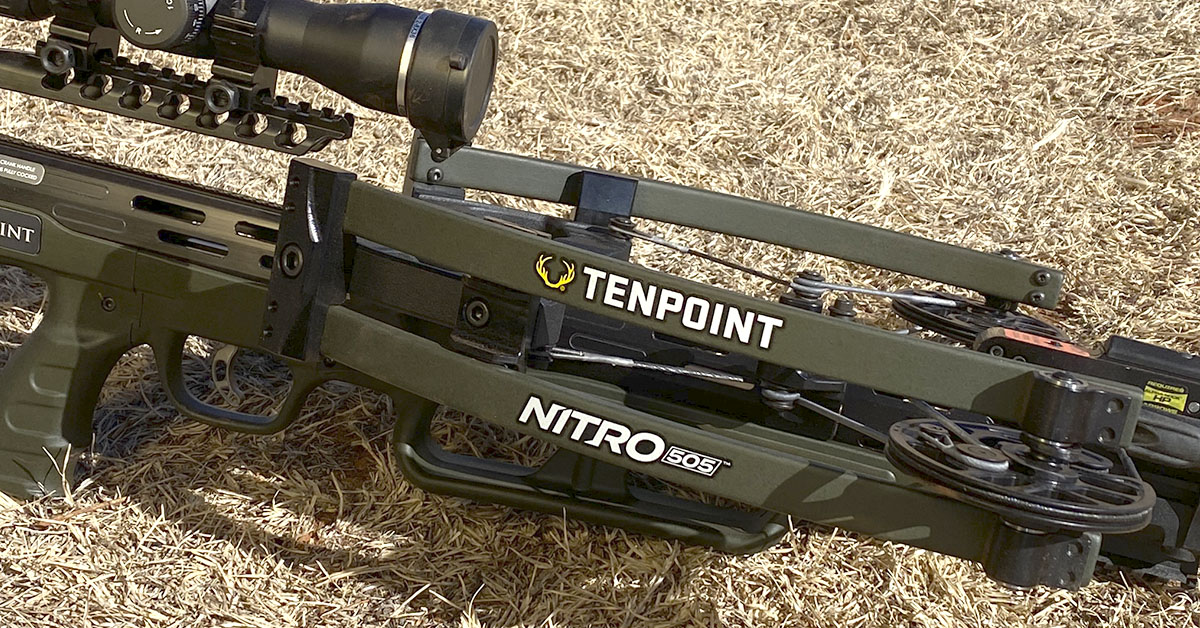 The reverse-draw crossbow limb design provides the platform for the Nitro 505 to sport a 17-inch power stroke—the longest in the industry. The increased power stroke generates more speed with less draw weight. The long power stroke keeps the arrow nock engaged with the string for an additional four inches of travel on the rail, boosting performance and accuracy. The reverse limbs attach to the center-mounted, forged 7075 aluminum riser and maintain balance closer to the user. The design prevents traditional crossbows’ “front heavy” feel, making it easier to hold steady and lending an additional “umph!” to accuracy. 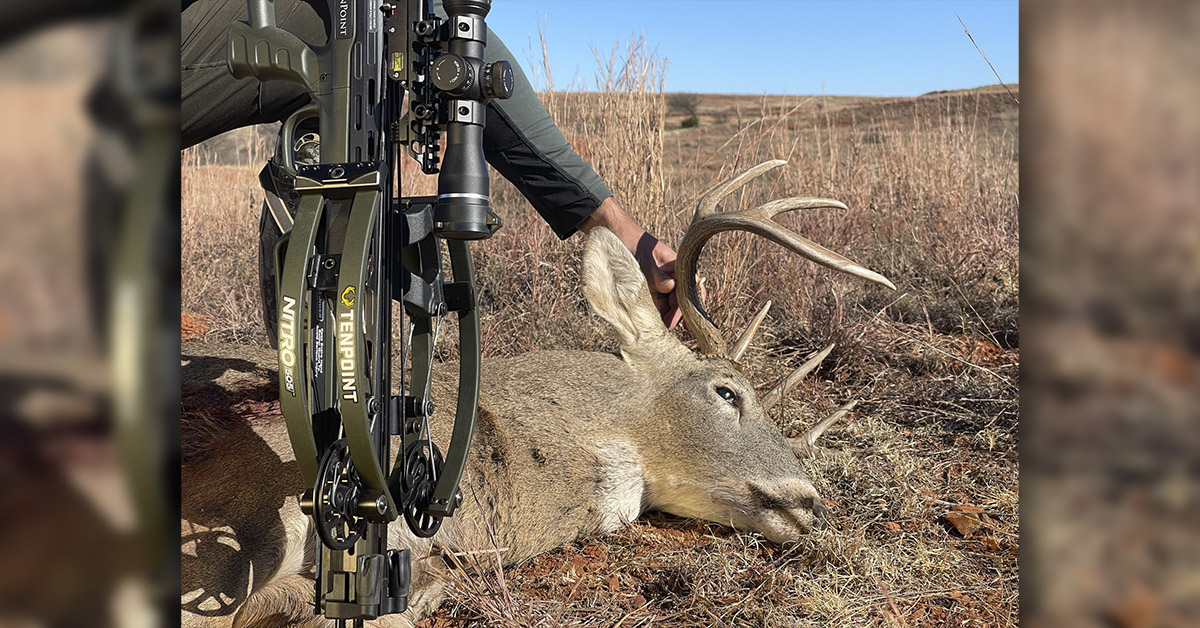 The Nitro 505 is fitted with a TenPoint two-stage, zero-creep, S1 trigger. The trigger uses an advanced roller-sear system that delivers a consistently crisp, 3.5-pound pull. The clean-breaking trigger improves accuracy and consistency. The trigger box is equipped with a DFI (Dry-Fire-Inhibitor) and fitted with a nylon-filament arrow retention brush to grip arrows and align them consistently. The design also reduces noise and vibration. An integrated string stop system is also included to reduce noise and vibration further.

The crossbow comes with a new 20-inch MICRO-TRAC rail made of fluted aluminum that sits on the barrel and reduces arrow contact with the flight deck surface by 50 percent. The design also minimizes string-to-barrel contact, increases accuracy, and affords longer string life. 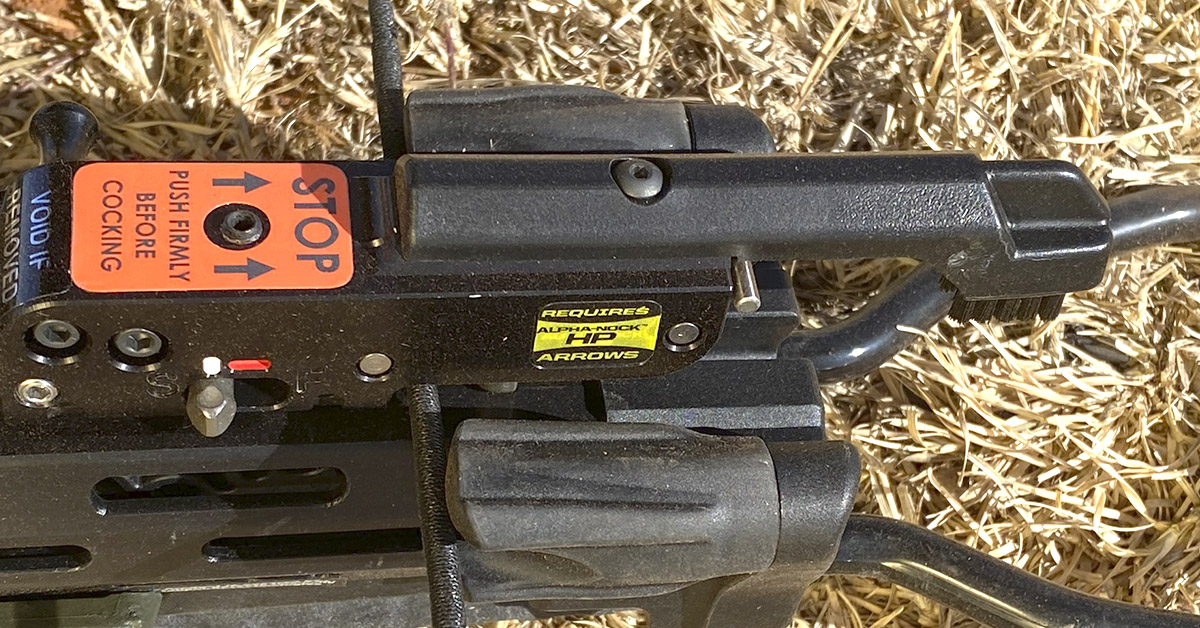 The Nitro 505’s barrel is fastened to an ultra-light, two-piece TECH-X stock with weight-reducing cut-outs. The stock houses the ACUslide system and offers an ideal length-of-pull. An eye-level-aligned rail facilitates use of a variety of optics.

The crossbow weighs just 7.9 pounds (without accessories), measures only 30.7 inches (without stirrup), and is available in Veil Alpine camo or TenPoint Moss Green. The Nitro 505 ships assembled and as a Ready-To-Hunt package. The package includes:

TenPoint Crossbow Technologies is 100% American owned and operated, and all its crossbow models are manufactured in Mogadore, OH.

Mechanical broadheads traveling over 500 FPS might make some hunters wince, but SEVR has engineered its heads with the blades folded into the ferrule to use acceleration, wind, and travel speeds to push the blades closed. An O-ring is added to ensure centrifugal force from arrow rotation does not accidentally deploy the blades. The rear-deploying blades open on impact and lock in place with no lost energy on a pivot. The blades provide an immediate slap-cut and steer their way around bone as they cut deep. 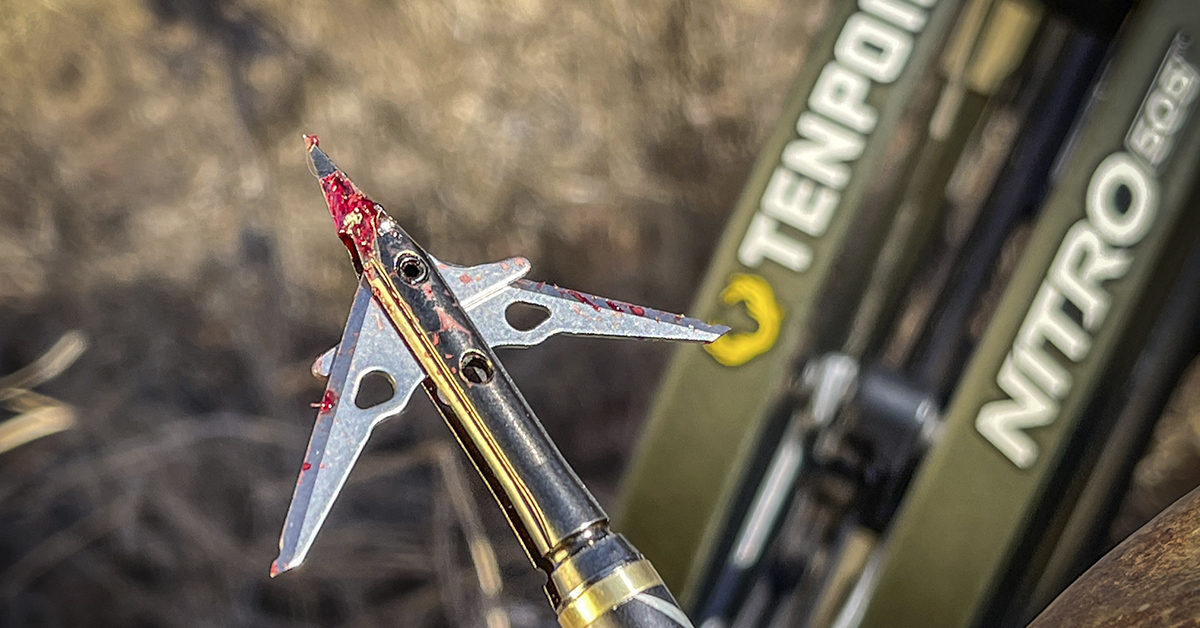 SEVR broadheads are available in 100-grain heads with a 1.5-, 1.7-, and 2.0-inch cutting diameters. To use the speed for hunting advantage, try the Robusto 150-grain, which will help quiet the bow and increase kinetic energy and penetration.

Another huge advantage is that SEVR broadheads have field-point accuracy that can be tested by using a lock screw in the head you intend to hunt with. Shoot it, remove the lock screw, and go hunt.