Colt’s legendary revolver returns to production…better than ever

I suppose the Rick Grimes character from The Walking Dead did as much for the six-inch barrel stainless steel Colt Python as Dirty Harry’s Harry Callahan did for the Smith and Wesson Model 29. Yet while the show has deteriorated, the Python keeps getting better. Following its 2005 hiatus, Colt reintroduced the new-and-improved Python in 2020, reasonably priced at about $1500.

The cheers of hard-core wheel gun fans have yet to subside nearly two years later.

The price of a new Colt Python .357 Magnum revolver has no bearing on the price of a collector-grade Python. The older pistols, if new in the box or lightly used, should keep their value. Overpriced, well-worn Pythons are just shooters not worth the usual asking price. 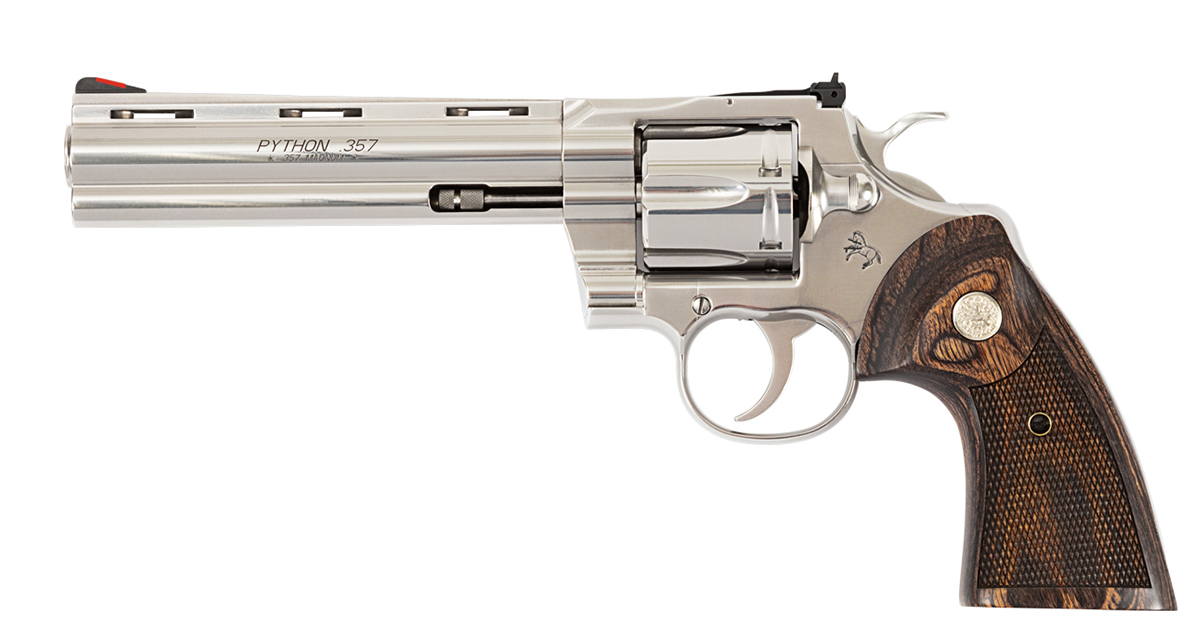 The new Python is a better revolver. I hear the anguish. I am a Colt fan but an honest one as well. I like the old guns and I appreciate the sense of history and emotional attachment. If you desire a Python that left the factory the year you were born, that is a great thing. If, like me, you are a shooter, then you will want a new Python. I don’t think the price is an impediment. You are purchasing one of the finest—if not the finest—revolvers ever made. You are getting into this handgun somewhat more cheaply than a Les Baer or Wilson Combat 1911, but you are at the top of the heap when it comes to Magnum revolvers. 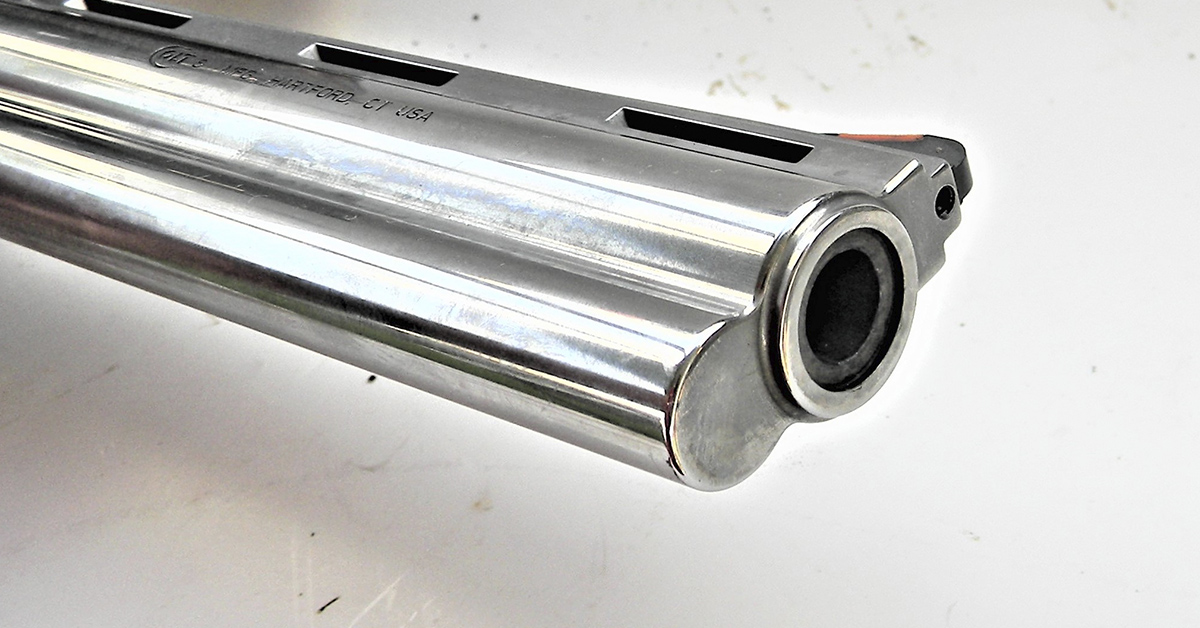 The original Python was a strengthened and improved revolver based on the Official Police frame. This is often called the .41 frame. It is larger than the Smith and Wesson K frame but smaller than the N frame—a good balance of strength and handling. The Python features a heavy under-lugged barrel. The sights are fully adjustable. The main advantage of the Python is a beautifully tuned action. The Royal Blue or nickel finish was good and so were the highly polished stainless-steel versions. The Python is among the best-balanced handguns ever manufactured. I often carry my original four-inch barrel Python. It is fast on the draw and fast on target. There is nothing like the Python for quick double-action work. The original Python was manufactured primarily with a four- or a six-inch barrel. Two-and-one-half- and eight-inch barrel versions are less common. There are the five-inch barrel rarities as well. The new Python is stainless steel and so far, the six-inch barrel seems far more common. I have yet to examine a four-inch barrel version.

Colt’s audacious introduction has maintained the outline and profile of the original as well as the butter smooth action. I feel that CNC machinery and modern precision has allowed Colt to manufacture a revolver with a lighter trigger action than the original while maintaining reliable ignition. This is a trick that has eluded many custom revolver smiths.

A concern with the original revolver was a lockup that transferred recoil energy to the action. This showed up in high-round-count revolvers. Colt’s tight lockup suffered more than other revolvers but maintained exceptional accuracy. The new action is smoother but more rugged. The frame is beefed up as well. There is nothing wrong with the Ruger GP100 revolver and I believe Colt took a hard look at the GP100—another .41 frame revolver—in designing the new Python to be all it can be.

The rear sight is a more robust design than the original and the front sight is removeable. The barrel features a well-done recessed crown. The handle geometry is slightly changed. I find this an improvement that makes for a superior firing angle. I also like the new Python grips. They offer good hand fit in both double-action and single-action fire. I prefer the classy, checkered design from Deer Hollow but the new Python design is certainly useful. The new grips feature several positioning pins and are very tight from the factory.

The updated six-inch Python passes muster on every point of examination. The real test is firing. I had some concern the action may be too light to crack harder primers, but these fears proved unfounded. The revolver has been completely reliable. I have fired a good mix of .38 and .357 Magnum loads. I enjoy handloading and the Python compliments a careful handloader.

There have been folks who say the new Python locked up on them. The Colt handles differently than a Smith and Wesson. The Smith has a return spring that presses the trigger back in place. The Colt is powered only by the V spring. If you do not allow the Colt trigger to fully return, it will, indeed, lock up. The cure is to simply release the trigger all the way forward after firing. The technique is simple. Press the trigger smoothly to the rear. As the revolver fires, allow the trigger to fully reset during recoil. As you re-align the sights, begin the trigger press again.

In double-action fire, there were no surprises. A six-inch barrel .357 Magnum revolver hangs on the target and doesn’t recoil very much. Keep up a rhythm with the trigger and you will destroy the target’s X ring. This is why the Python ruled PPC matches as an out-of-the-box competitor. The .38 Special is a well-balanced and accurate cartridge. Miserly with gun powder and more powerful than most allow it credit, the .38 Special is a fine all-around target, defense, and outdoors cartridge.

I like the new Python. Love it or not, or resent the changes, the Colt Python is now available for shooters wishing to own a superior revolver. 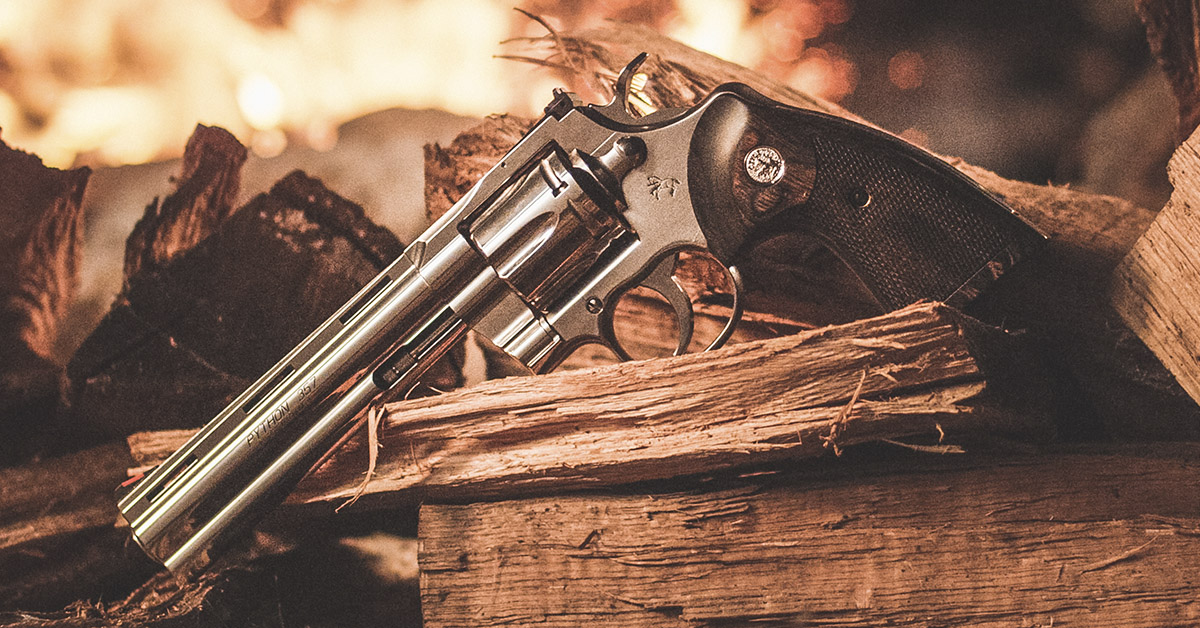