My first crossbow experience wasn’t a good one. The bow was a nightmare to assemble. When I did get to the end of the 41-page (exaggeration but close) assembly manual, and the crossbow was ready to send carbon, I was terrified to shoot it.

What if I’d missed a step?

What if the string triggered when I slid the bolt down the rail?

What if my fingers accidentally wandered above the flight deck?

Don’t get the wrong idea. I’m not crossbowphobic; I just wasn’t impressed with some of the early models I tinkered with. That’s the fault of the manufacturer and not the weapon.

Years later, 18 feet up a Florida hardwood, I fired my first bolt at a wild feral hog from a TenPoint model. I don’t remember the specs of that crossbow or even its name, but assembly was a breeze, cocking it was effortless, the trigger was crisp, and its accuracy was insane. That’s why I was so excited to unbox Wicked Ridge’s new-for-2023 Raider 400 De-Cock and start having some post-Christmas fun.

Wicked Ridge is a sister company of TenPoint, and for the money, you can’t beat the bang for your buck you get when you drop coin on a Wicked Ridge model. After reading Wicked Ridge’s press release on the new crossbow to get more familiar with some of the latest technologies and features, I went to work.

Wicked Ridge provides an instruction manual, but assembly is a breeze, which I want in a crossbow. Attach the cable saver and then slide it into the cable slot. While holding the cable saver in place, slide the riser onto the barrel. It’s that simple. Give a tug on the bowstring to seat the bow assembly, and then use the single Main Assembly Bolt with washers and included Allen wrench.

The tested model was fitted with the ACU-draw De-Cock integrated into the stock, ready to go out of the box. Wicked Ridge also offers the Raider 400 with a standard adjustable stock. The crossbow sports TenPoint’s ProView Lighted Scope (more to come on this), which is mounted to a Picatinny-rail system. The scope is adjustable on the rail so that each shooter can customize the stock-to-scope distance. 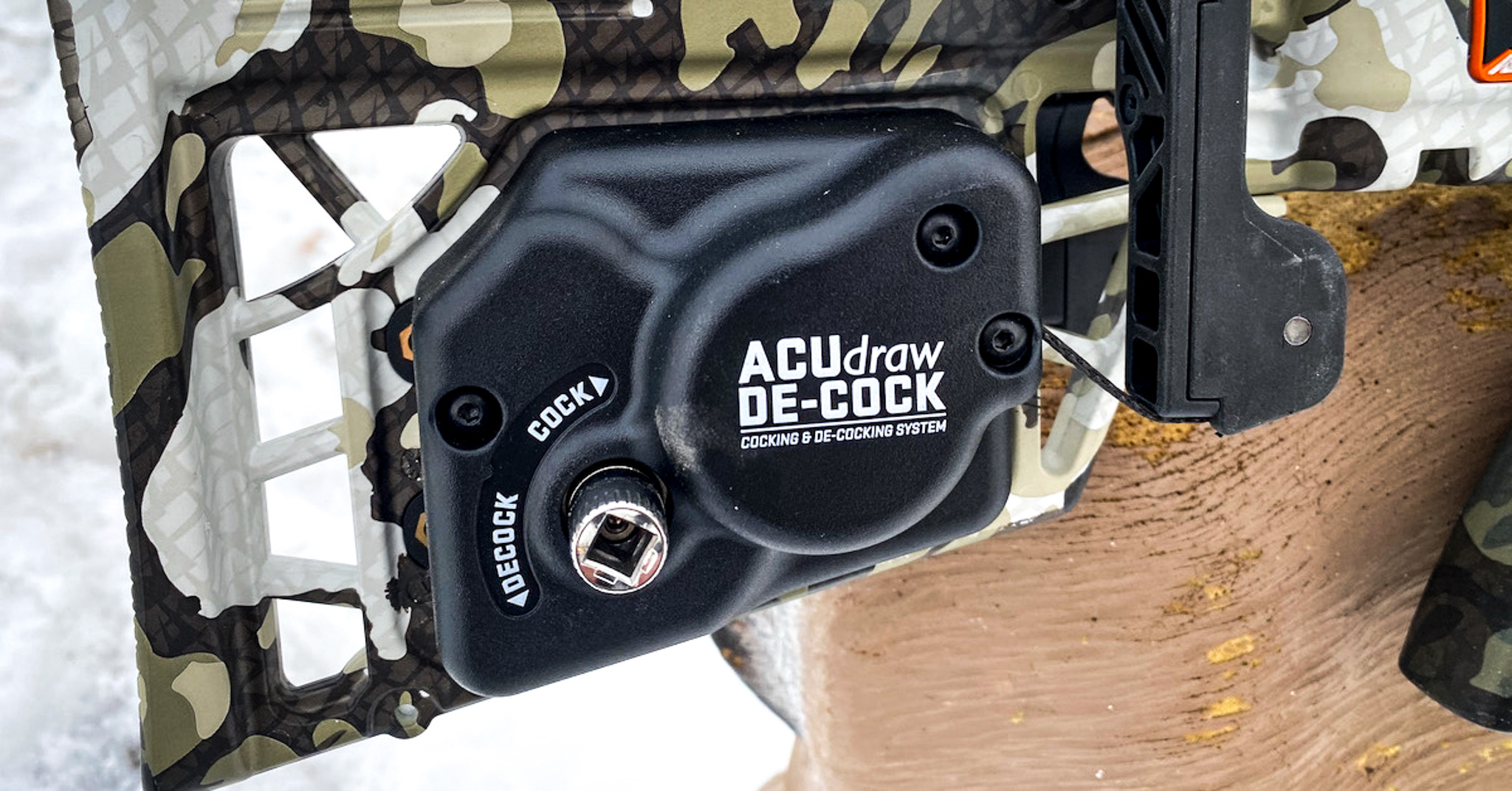 The tested model did not come with Wicked Ridge’s new Tactical Stock, so moving the scope along the Picatinny-rail system was essential to obtaining proper eye-to-scope alignment. Wicked Ridge offers a new Tactical Stock option that allows shooters to adjust the butt stock over five locking positions. With 2.5 inches of adjustability, the Tactical Stock is ultra-light, which is noted by Wicked Ridge to up the crossbow’s maneuverability.

The included quiver mount and quiver must also be attached, but the instruction manual walks the user through the process and is remarkably simple. The only other thing to do, which takes about two minutes, is the attachment of the foot stirrup.

I could waste a pile of ink and article length regurgitating what you can read online about Wicked Ridge’s shiny new penny, but I won’t. Let’s dive straight into cocking and shooting this crossbow, and we will cover some of its fancy-to-do features as we go.

I wish the crossbow’s foot stirrup were a tad wider, but doing so would require more weight and less maneuverability, so Wicked Ridge got it right from a hunting standpoint. With my foot in the stirrup, I removed the ACU-draw sled from its locked-in-place home right in front of the stock’s cheekpiece, extended the 1,000-pound nylon straps over the scope, and hooked it on the bow string. This process is simple, quick, and quiet. Next, I inserted the ACU-draw crank handle and started turning the ACU-draw system clockwise, which with only five pounds of effort, brings the string back perfectly, and once seated, an audible click is heard. I love this feature. It lets you know the string is locked in place, and you can safely remove the ACU-draw sled and return it to its position. I noted this before, but when you return the head of the ACU-draw system to its designed location, it locks in place. There is no rattling or slop. 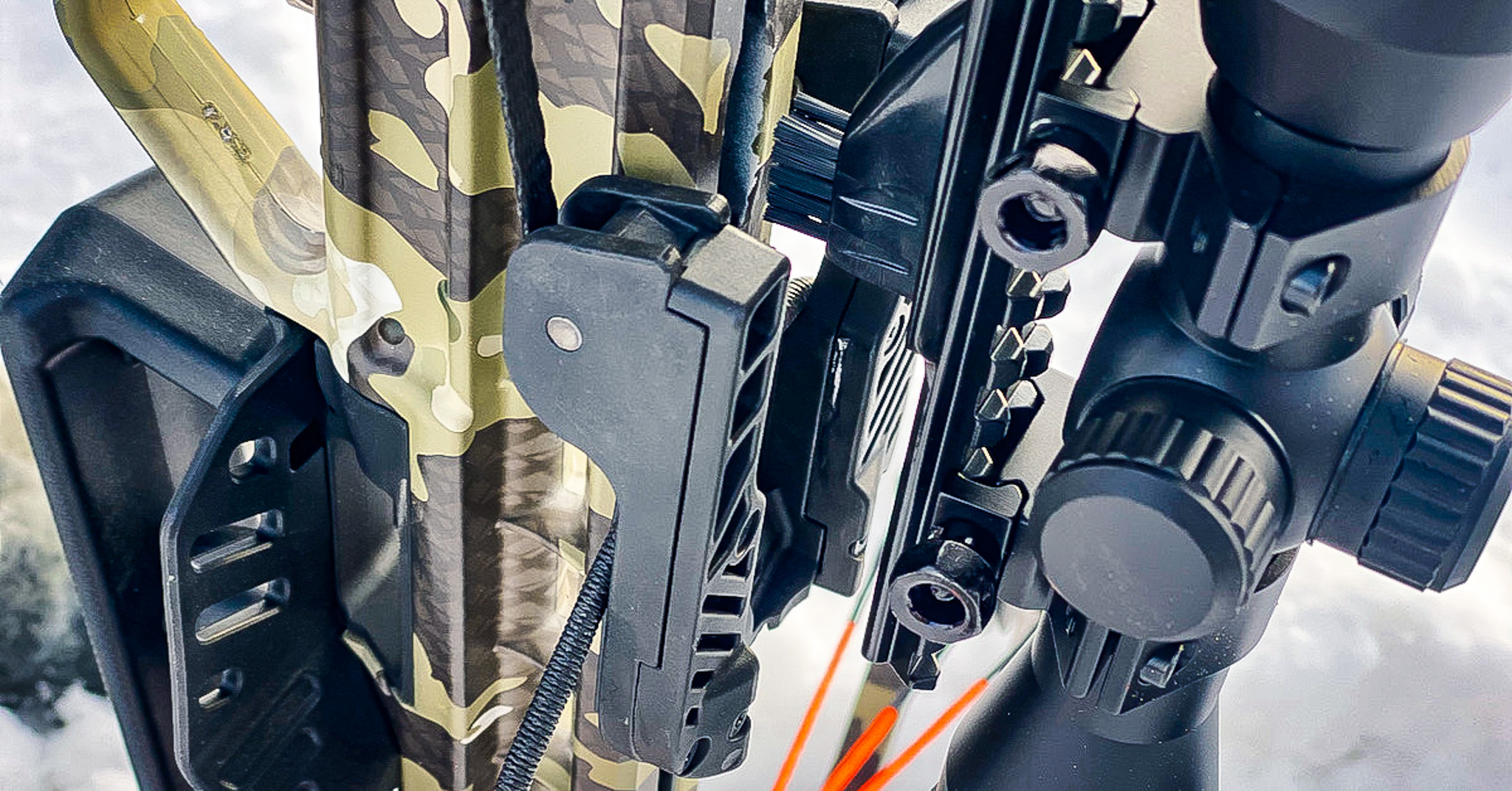 Safety and the Wicked Ridge name go hand in hand, and that’s another feature I can’t say enough about. Everything about this crossbow’s build is designed to make assembly and the shooting experience ultra-safe. The second the string clicks in place, the auto-safety engages. This means it’s safe to take one of the included (3) TenPoint Match 400 bolts and slide them down the rail. The white cock vane should be inserted down, which sets it into the rail, and the brush, located under the Picatinny-rail, rests comfortably between the pair of orange vanes. The bolts seat perfectly.

With my bolt loaded and crossbow on a pair of Primos Trigger Sticks and butt resting comfortably in an ALPS Rhino MC seat, I pushed the sizeable triangular button marked Push To Fire in, and the crossbow was hot. At any point, shooters can quickly and easily return the Raider 400 to safe by pushing the marked Return To Safe lever down. As I mentioned, Wicked Ridge goes the extra mile regarding safety. 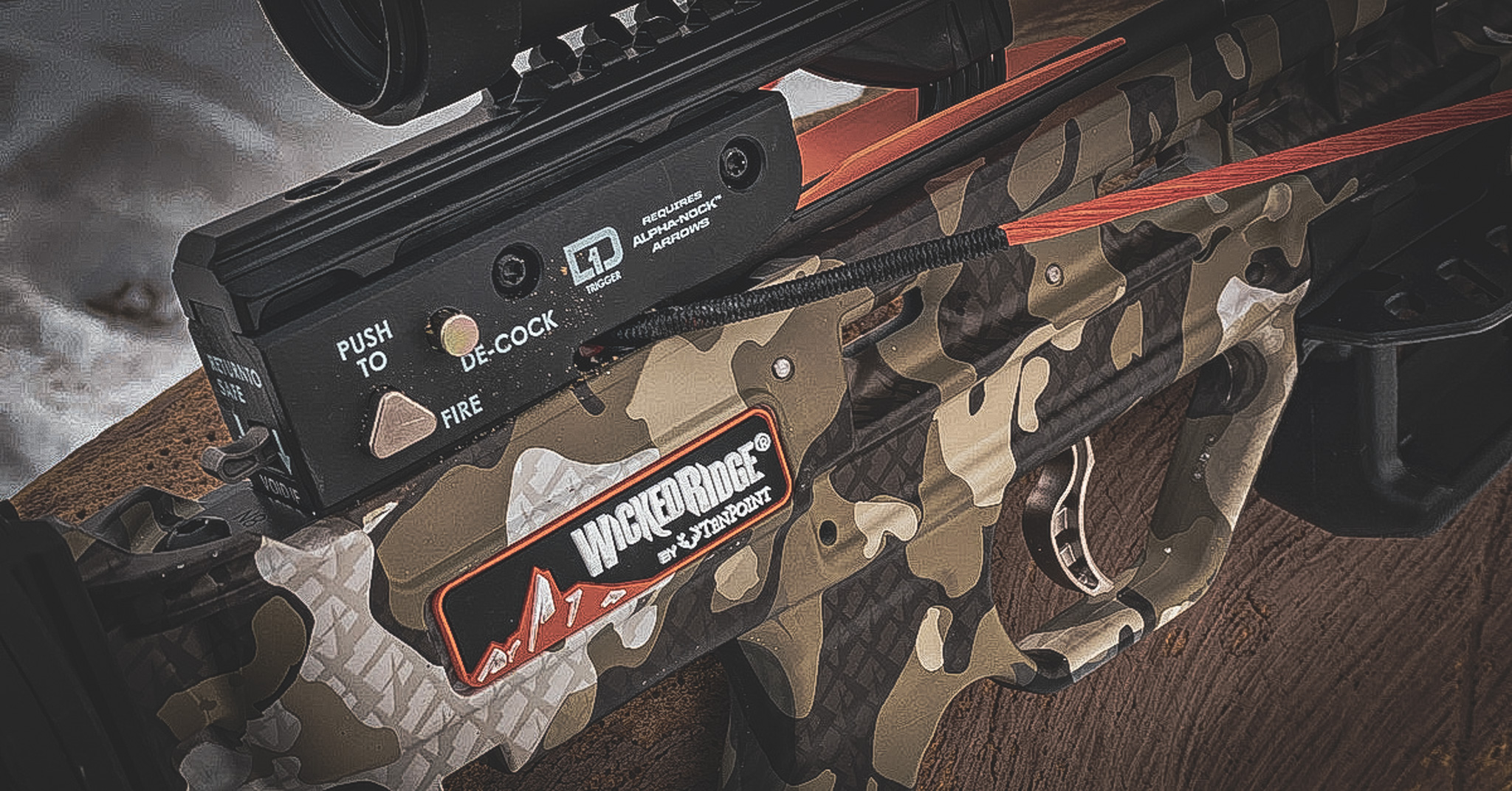 The patented D-1 Trigger welcomes the finger, and the 2-Stage design includes a new DFP (Dry-Fire-Prohibitor), which gives the crossbow another notch in the safety column. The trigger is smooth — Wicked Ridge brands the break at 3.5 pounds, and I would agree. When the trigger breaks, there is no jump or buzz, or kick. I could stay in the scope and watch my first bolt hit two inches high and three inches left of the dot on my Block Range Target. The crossbow is also incredibly quiet. 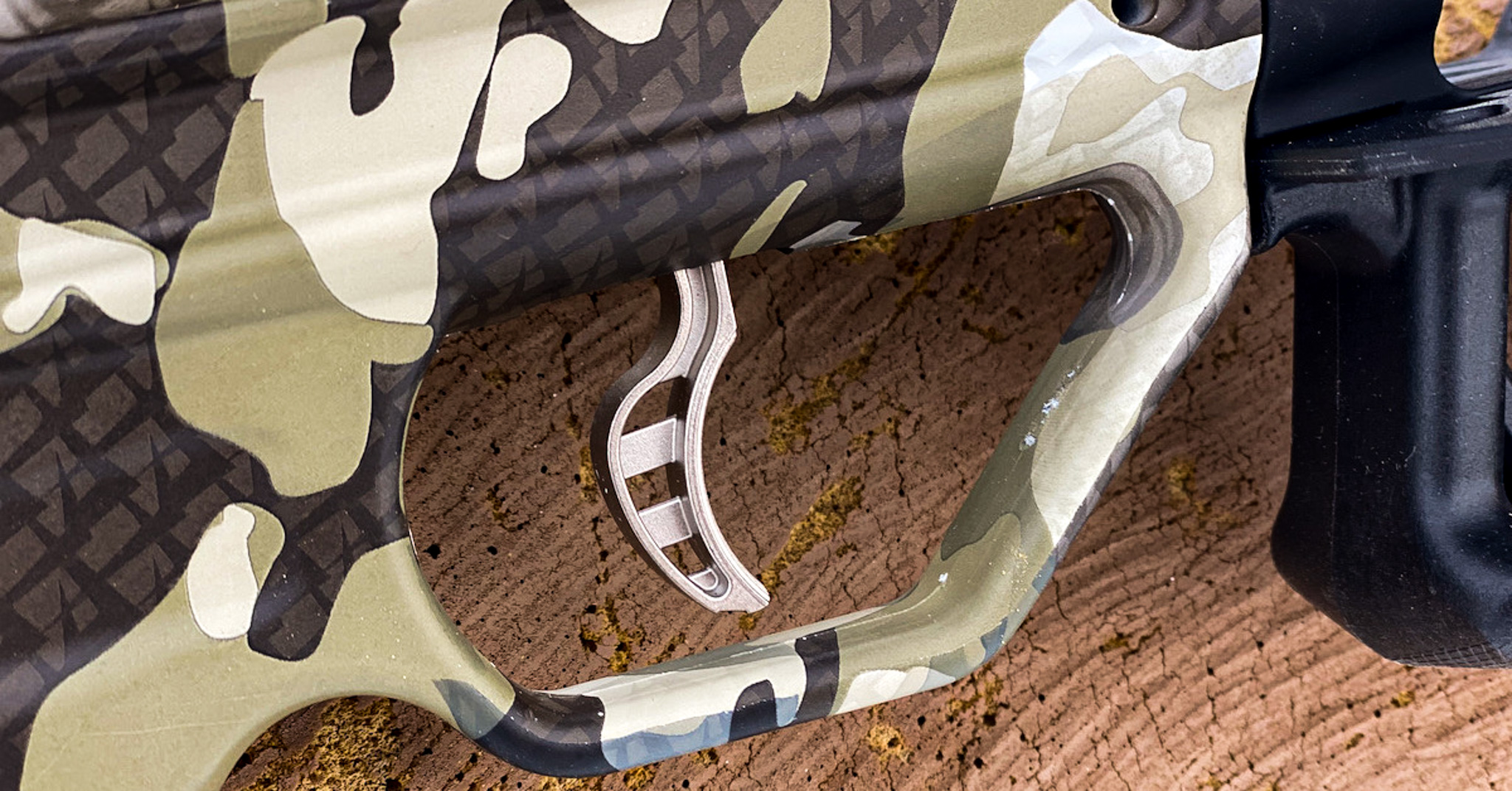 You will read that the scope comes pre-sighted; however, you should always check this, and after tinkering with the scope’s position on the rail, I was by no means spot-on at 20 yards. I shot a three-bolt group to confirm the placement of the first bolt in the target, which was a mistake. I broke one bolt and blew vanes off the other. This crossbow is a shooter, and the ACU-draw system makes cocking it effortless.

After making some down clicks to my elevation turret and some right clicks to my windage turret, I quickly got the crossbow dialed at 20 yards. Then, I confirmed each dot inside the reticle. Wicked Ridge did a great job with calibration, and once sighted in at 20 yards, the other dots in the reticle were set for this crossbow/bolt combo. The speed was impressive. A four-shot group produced an average fps rating of 401. This crossbow is as accurate as the day is long, and it’s a blast to shoot. When you have a compact and lightweight horizontal rig that provides pure shooting joy, confidence builds, and the amount of meat you put in the freezer each fall will increase. 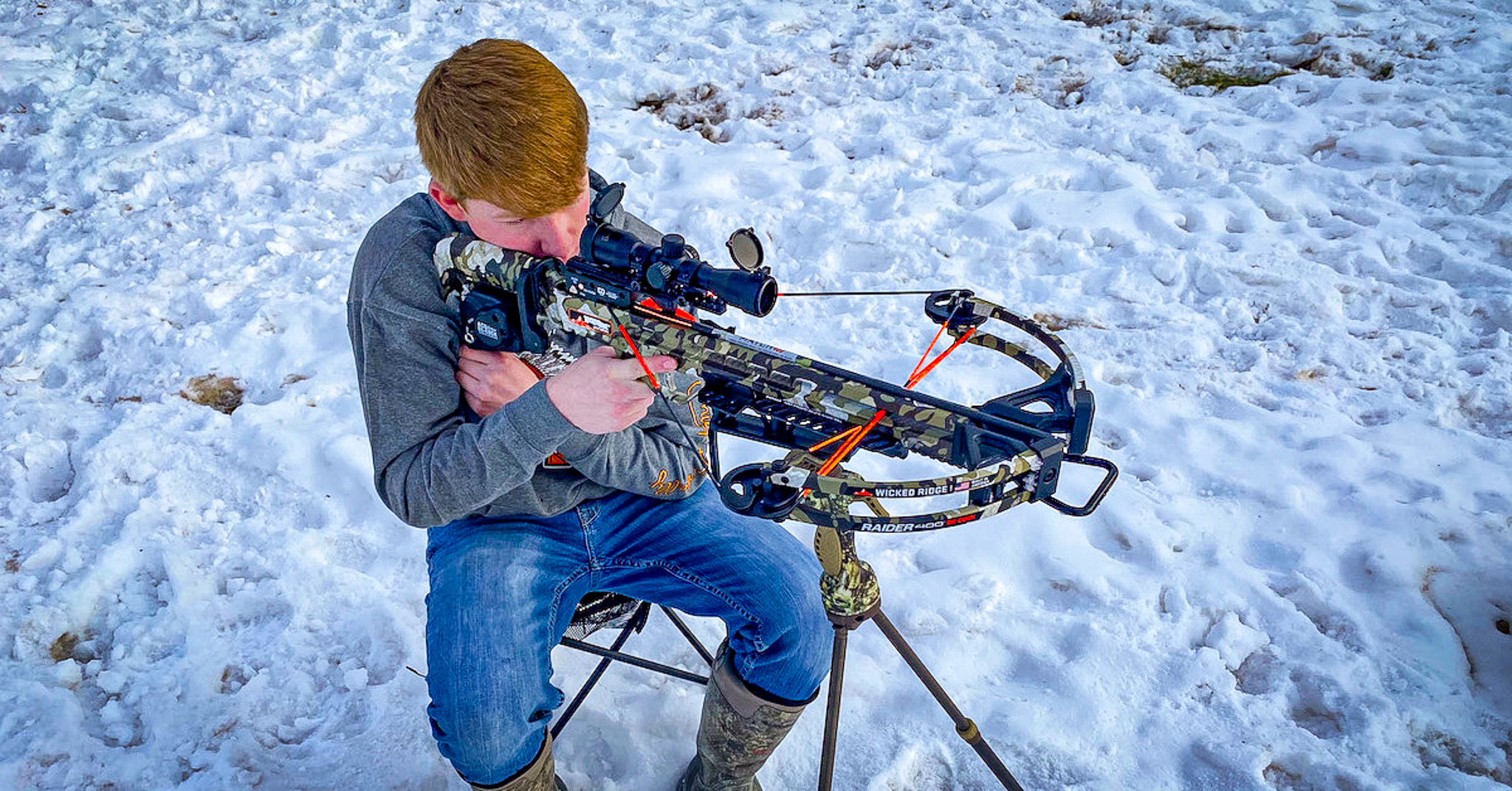 I’ve touched on several of the Raider 400’s safety features, but I’m not done. I mentioned at the beginning of this article that one of the first crossbows I shot had nothing to prevent the fingers of the support hand from wandering above the flight rail. That’s never a worry when sending carbon from the Raider 400. The Flight Deck is marked, and its large wings keep the fingers from creeping upward. 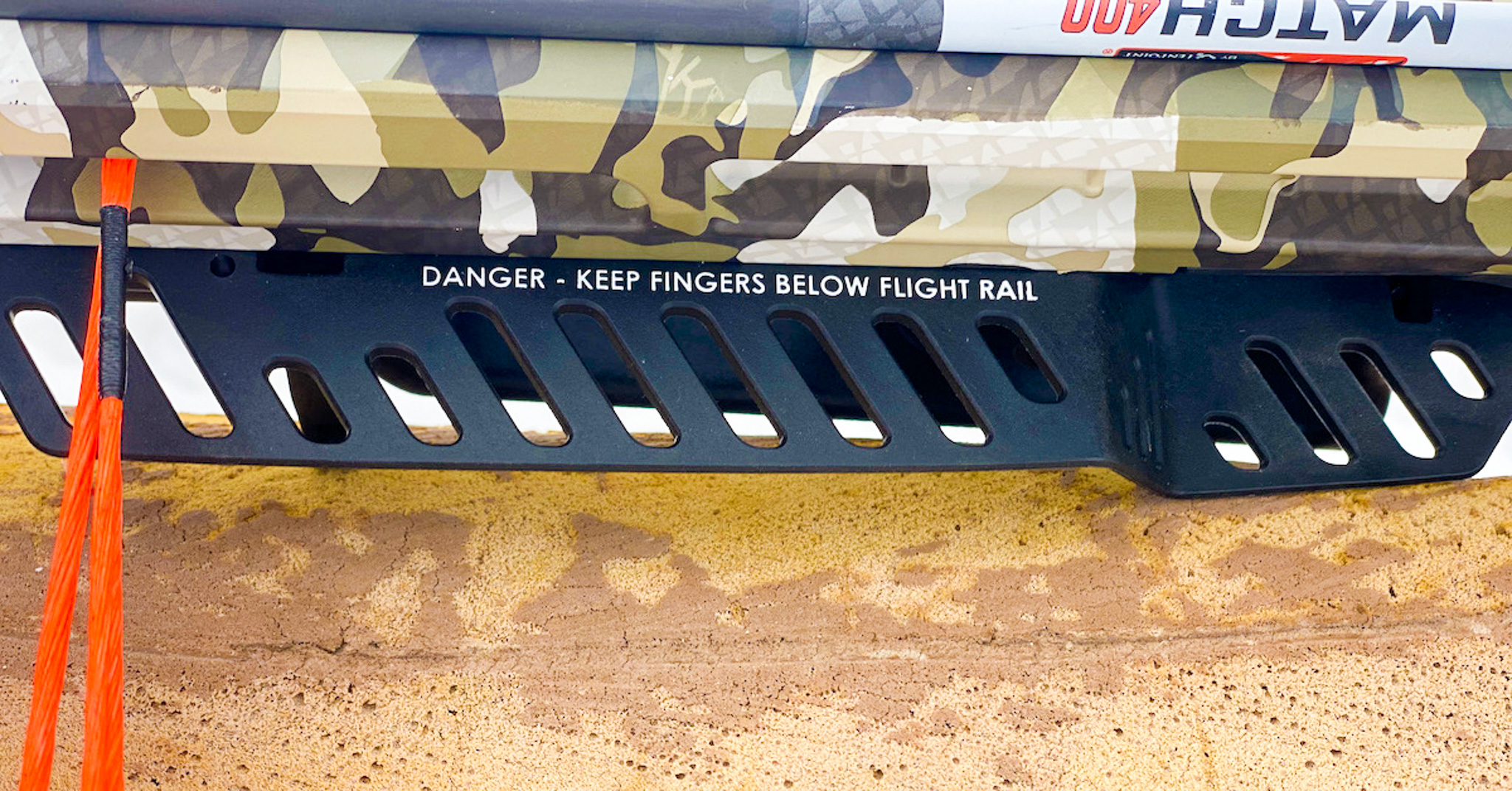 Another feature of this economic shooter I appreciated was the lighted Pro-View Scope. Aside from the windage (right) and elevation (top) turrets, the scope also has a third turret, which is the lighted option. A forward turn of the turret illuminates (red) each of the four dots, and brightness can be adjusted accordingly.

I want to round this field test out with a feature I can’t believe Wicked Ridge could put into a crossbow with an under $900 price tag, and that’s the De-Cock option.

In years past, the safest and best way to unload a crossbow was to shoot it; however, when hunting or on the range, shooting a bolt to unload the crossbow isn’t always the best option, and with the Raider 400 De-Cock you don’t have to. No more taking a target with you to the woods and damaging expensive bolts, discharging them into the ground. With the crossbow loaded and the safety on, place the ACU-Draw sled over the string, push the labeled De-Cock button next to the Push To Fire button, insert the crank, and start turning. Don’t fret while turning the crank either. If your hand slips off the crank, the string, bolt, and sled aren’t going anywhere, and the handle will stop in place.

Wicked Ridge’s ultralight, compact, and deadly accurate Wicked Ridge Raider 400 is long on safety and performance and will make a great field companion in 2023.