A fresh name and a different cast of characters helm the storied Remington firearms brand. So, what does this mean for the new-generation Remington 870 shotgun?

In 1950, Remington gave us the bestselling shotgun of all time — the Model 870. The Remington 870 replaced the Model 31 shotgun, which was a popular and well-crafted pump action shotgun in its own right. The Model 31 was known for a smooth-as-glass action and probably sold around 200,000 in its day. That was considered a lot of sales in the late 1940s but the Model 870 blew all of those figures out of the water.

So, after appearing in 1950 (some claim 1951, but we don’t have room to argue that here), the Remington 870 really caught on with the public and by 1966 the first million had been sold. The 870 became a standard for American hunters and shooters, and by 2009, Remington celebrated selling 10 million Model 870 shotguns. (Word has it that this number is now over 11 million.)

The Remington 870 has been made in so many different configurations I doubt we could count them all. What they all have in common is what made the 870 so popular in the first place. Rock-solid construction with a receiver made from one piece of steel and twin action bars — those are the two metal bars that connect the forearm with the internal action of the shotgun — making the 870 one rugged piece of machinery. (More on the twin action bars later.) There are Remington Model 870 shotguns in closets and gun cabinets all over America and we now have at least three generations of hunters and shotgun shooters that were brought up on an 870.

The 870 was the result of the work of four men at Remington: G. E. Pinckney, L. Ray Crittendon, Phillip Haskell, and Ellis Hailston. Taking parts from the Model 11-48 autoloader, they built a pump gun to replace (sadly) the classic Remington Model 31. A new era in gun manufacturing was dawning and Remington needed to produce a shotgun with stamped parts and a mechanism that did not require labor-intensive hand fitting. In short, they endeavored to make a shotgun that was cheaper to build in less time. While this could have been a recipe for disaster, it was not.

The Remington 870 was immensely popular with the public from Day One and, I think, remains so to this day. The 870 was made in dozens, probably hundreds of variations, from the prettiest Wingmaster model with deep bluing and glossy furniture to the plainest Jane synthetic stock and matte finish.

In 1987, the Express model was introduced; it was very popular and there are millions of them still out there in duck blinds and behind the seats of pickup trucks. The less expensive Express model featured cheaper wood and a matte finish that, at least in later years, was notorious for rusting at the first hint of moisture. There are complaints that the later Express 870s, prior to the Remington bankruptcy, were prone to functioning problems, but I never experienced this.

Most of us know of Remington’s plight in recent years, and in the fall of 2020, they went through yet another bankruptcy resulting in the company being divided up and sold at auction in several different pieces. Marlin was bought by Ruger. The ammunition division of Remington was bought by Vista Outdoor, which also owns Federal ammunition, and the Remington ammo plant in Lonoke, Arkansas, has been producing ammunition under the same Big Green brand for some time.

Amazingly, the ammo production at Lonoke never really stopped, even during all the fiasco with the bankruptcy and the Covid mess. One of the things shooters and hunters have trouble with on various forums is understanding that the ammo side of Remington and the gun side are now completely separate. So, if you are engaging in what seems to be a popular pastime of bashing different gun and ammo companies, remember, “Where is all the ammo?” grievances go to Remington ammunition in Lonoke, Arkansas, not Rem/Arms in Ilion, New York, where Remington firearms are made.

This wonderful age of internet enlightenment has made it easy to cast digital stones, and maybe nowhere is this as apparent as in the gun world. After the bankruptcy debacle and the subsequent auction of the various pieces of Remington, those who would complain about Remington’s shortcomings seemed to come out of the woodwork.

Any post by Remington Ammunition or RemArms, the new firearms side, is often met with a barrage of complaints of faulty guns from the past. These complaints seem to center on guns made in later years, right before the bankruptcy. Those complaining say these guns are junk and long for the 870s and other Remington firearms from the past.

Our question today is, “Is the new 870 FieldMaster from Rem/Arms junk?”

On the Range, in the Water, and in the Freezer

I bought a new RemArms 870 Field Master with the idea of putting it through the wringer. And that is exactly what I did.

First, I took the FieldMaster to the trap and skeet range and shot one round of each, (even though I detest skeet). This included singles and doubles. 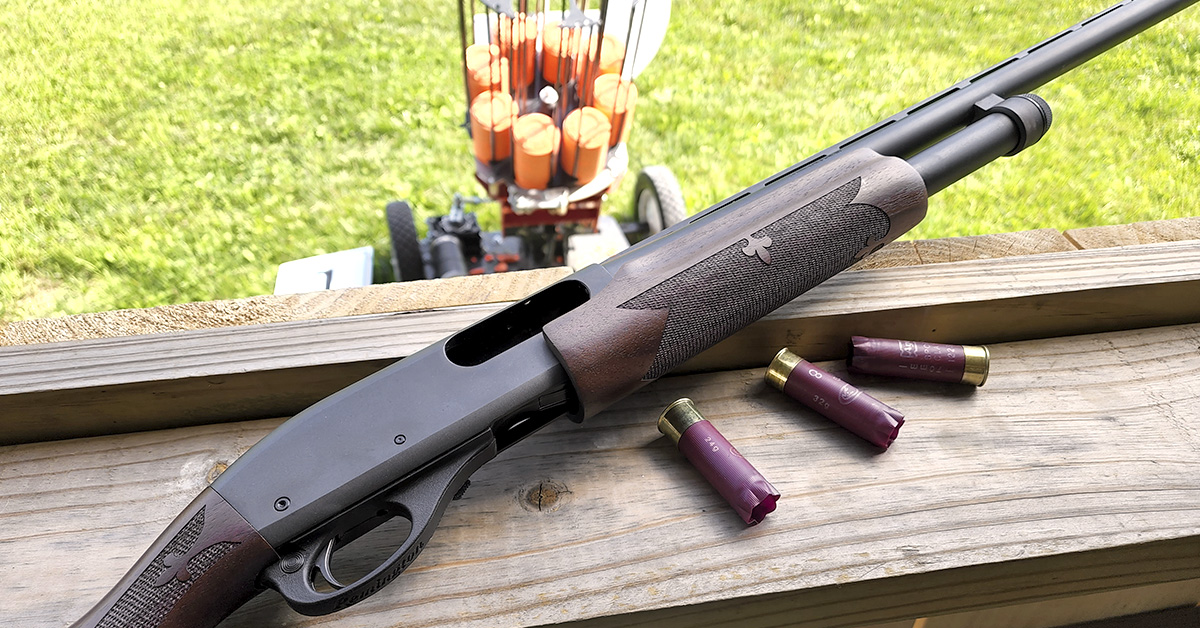 After this, with the help of a couple assistants, we kept the barrel on the gun hot, as I wanted to give the new 870 every chance to fail. We shot random stations on the range without letting the shotgun rest and used a variety of ammo, including Remington, Aguila, Winchester, Browning, Federal, Fiocchi, and Kent. Most of these shells were “low brass” 2 ¾-inch ammo in the target and field load realm, but occasionally I would sneak in a 3-inch magnum load along with a few nuclear turkey loads. I wanted to ensure the 870 would handle these loads with no problems. I will say that shooting a string of 2 ¾-inch ammo with a 3-inch load snuck in there will certainly wake you up in the morning.

The new FieldMaster is a 3 ½-inch gun, so we shot as many of these as my assistants could stand — at least 20 rounds. The FieldMaster functioned relatively hitch-free, with one minor setback on a failure to feed. Upon carefully inspecting the shell, I found it was an old reload of mysterious origins. The brass on the shell was enlarged and I called this one not the fault of the shotgun. We shot about 200 rounds the first day and over 100 the next. The FieldMaster patterned well as it averaged over 200 pellets in a 30-inch circle at 35 yards with the full choke. (Most of these were 1 1/8 oz. loads with some 1 ¼ oz.) We also fired several 3-inch TSS Turkey loads, #9 shot (Remington and Apex), which averaged well over 200 pellets shot in a ten-inch circle at 40 yards. 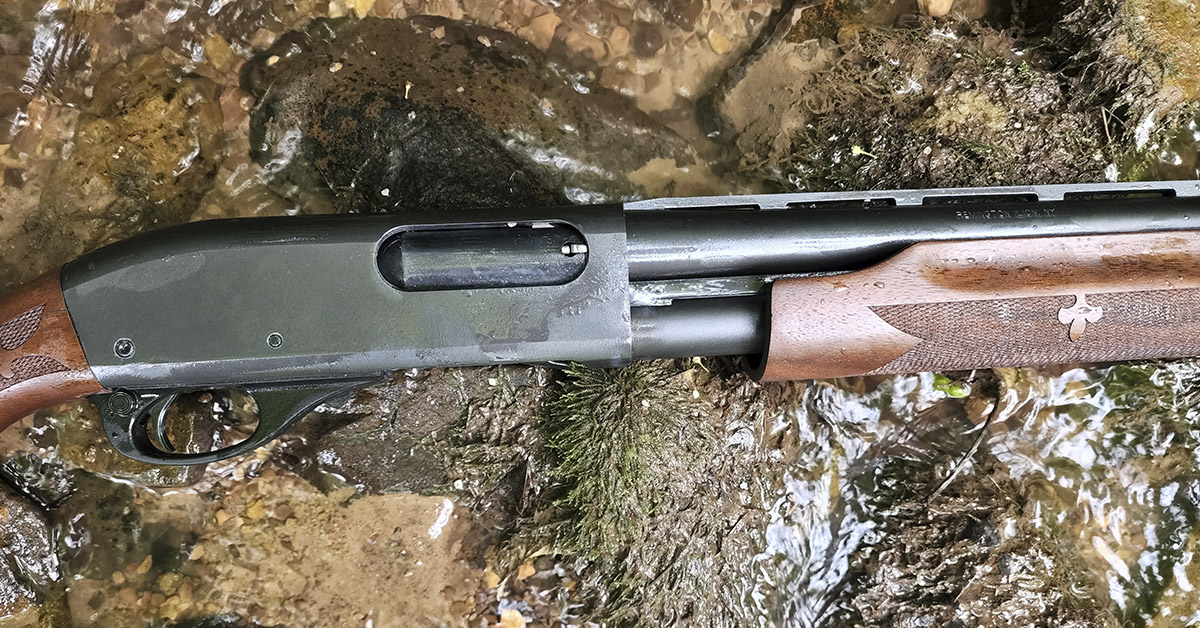 Figuring most duck and goose hunters have a story about dropping their shotgun in the water, I decided to address that possibility. I didn’t have a lake or pond handy, but I submerged the gun in a small creek and let the water run over it for several minutes. I pulled the shotgun from the water and immediately loaded it with five rounds and shot them with no problem. I then loaded five more and did it again. The FieldMaster fired these rounds as before.

Next, I got the bright idea to dissemble the 870 and stick it in the freezer overnight. (This, by the way, was without any cleaning after the dunking in the creek.) After over 24 hours in the freezer, I assembled the gun and fired five rounds. I then waited a few minutes as it thawed and shot five more with no problems. 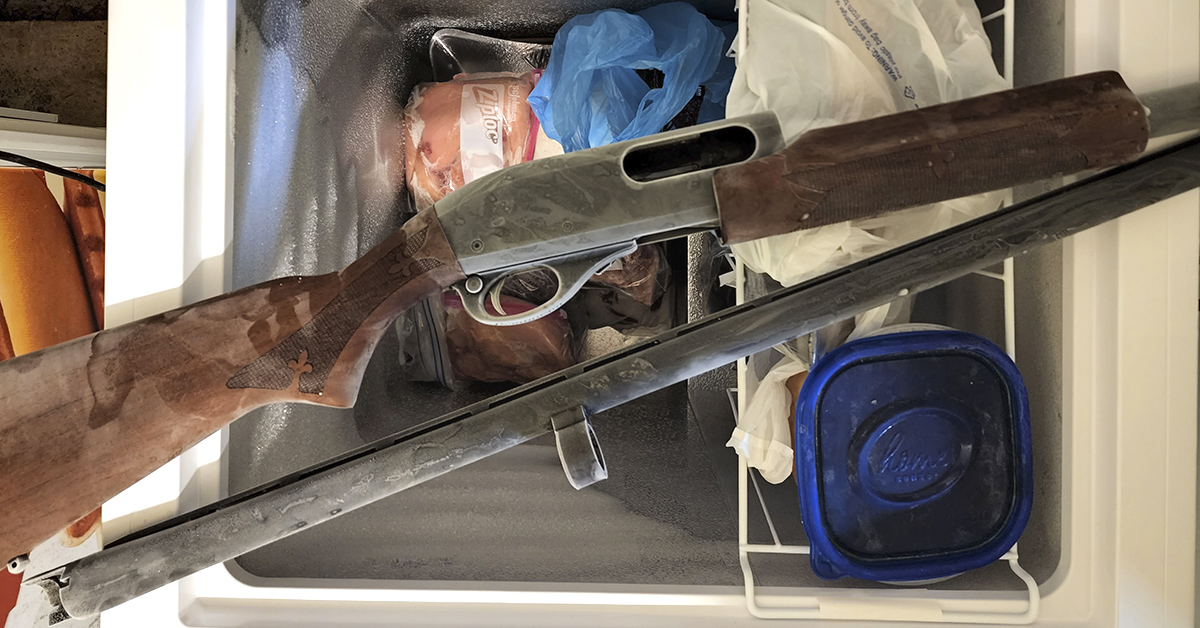 Returning to the complaints online about this new 870 for just a minute…I must ask what do these people want a shotgun to do?

I have laid out what I did with this gun, and it performed without a hitch. If you take the time to do all this with a new 870 FieldMaster and it doesn’t come up to these standards, I would like to hear about it. Sometimes, against my better judgement, I will enter into a discussion with someone on a forum or on the Book of Faces. The person will state that the new 870 is a piece of junk and then rant about Remington in general in past years. If I can communicate with them (sometimes you just can’t), I try to ask if they have actually had this shotgun — the new FieldMaster — in their hands. There is usually a lot of back pedaling and crawfishing, and maybe a comment about what they heard a buddy say about it, but no, they have never seen one of the new guns. My point is, if you haven’t actually seen the new 870 and shot it some, how can you slam it?

This shotgun certainly looks good. The stock and forearm are dark walnut and the fit and finish of the wood to the metal receiver are excellent. The old-style Fleur-de-lis checkering is a nice touch. (When have you last seen nice walnut on a shotgun priced at $600 or less?) 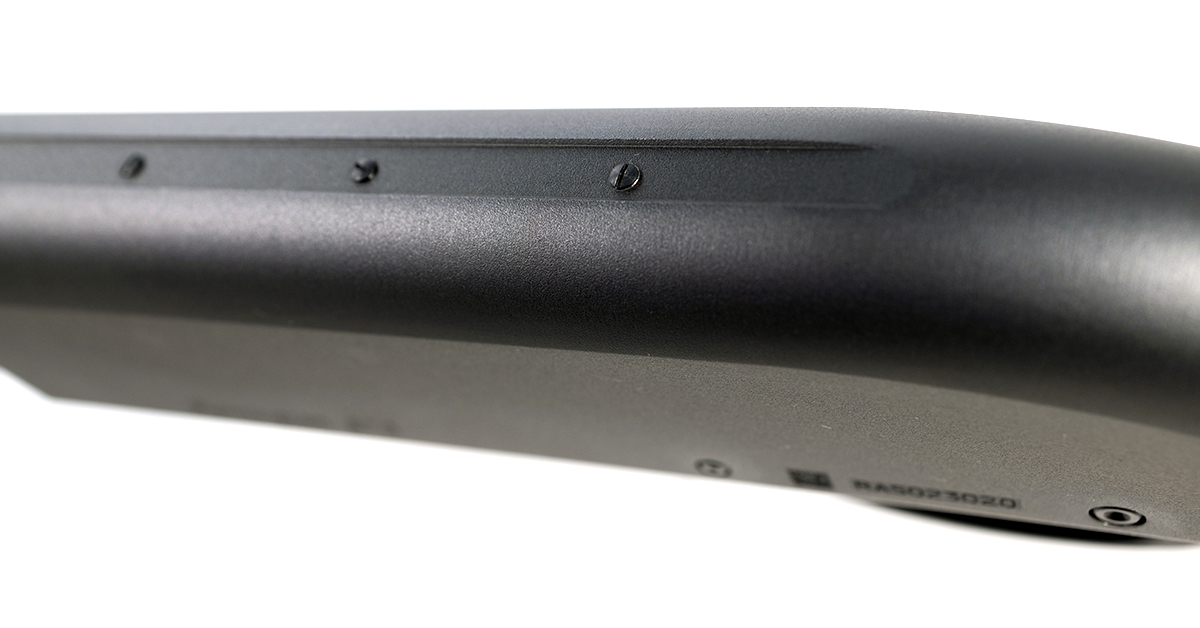 Rem/Arms definitely improved the finish on this shotgun from that of the old Express model. The metal workings are also improved with a smoothing process on the two action bars and the internal parts in the action. 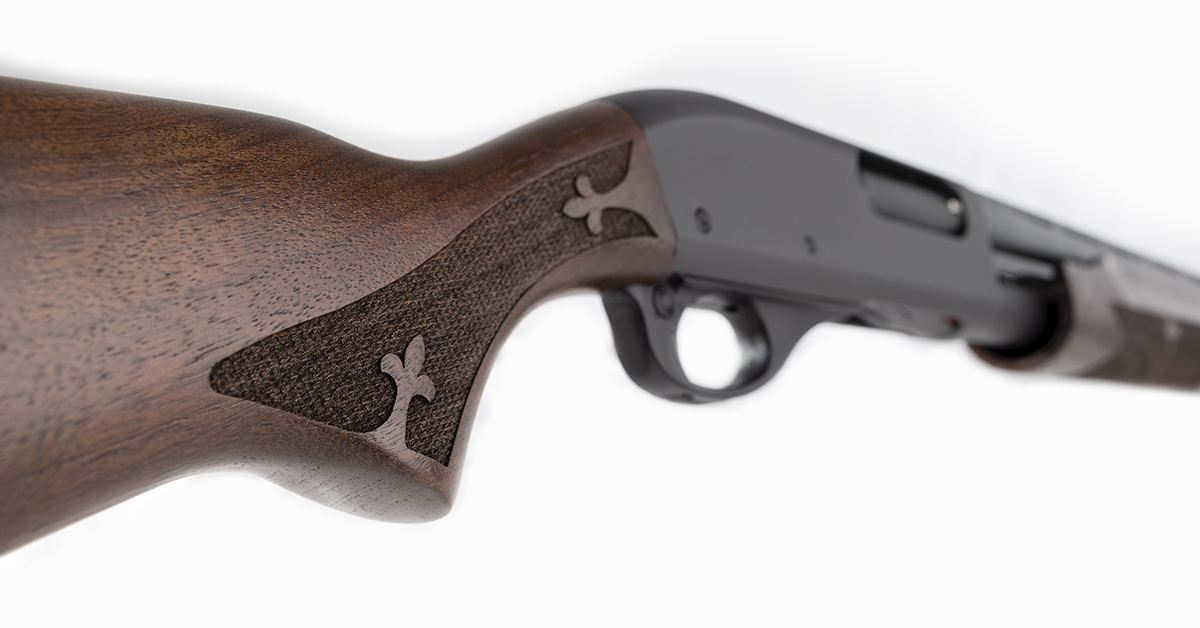 The shotgun has an improved recoil pad that helps, but the 870 is a pump shotgun, and you are going to have some felt recoil on heavy loads. The receiver is drilled and tapped for an optic for the turkey guys. There are swivel studs for a sling, and the FieldMaster ships with a full, modified, and improved cylinder choke. Rem/Arms also put a clever turnkey mechanism on the magazine cap for easy access to the magazine spring. 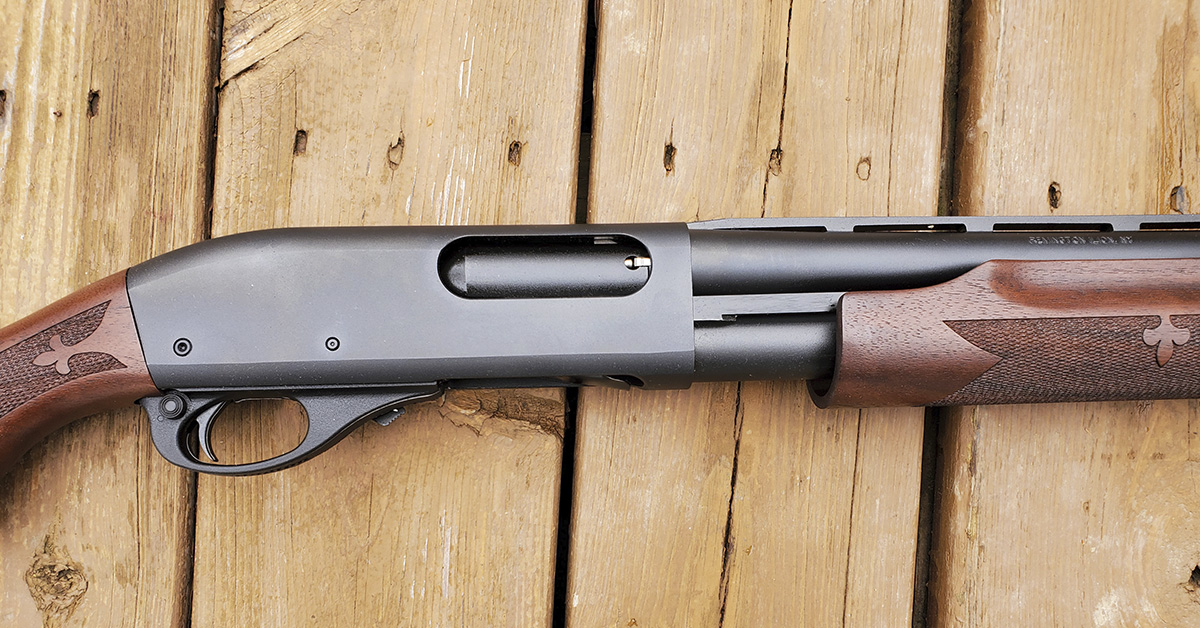 If you long for the days of the old 870s, this is the next best thing. You can, no doubt, find older used Remington 870s out there, but if you want a new RemArms 870 shotgun, definitely check out the FieldMaster.

The HIVIZ Turkey and Deer Sight eliminates the “How can you miss with a shotgun?R…