Combine Benelli’s exquisite Super Black Eagle 3 shotguns, a sky full of willing waterfowl, and two excited little girls and you have a day of memories that will stand for a lifetime

We were invited on an afternoon waterfowl hunt that would include our two-and-a-half-year-old twin girls. It takes special friends to put up with the energy and excitement of youngsters in a blind, but Ralph and Josh Luedtke, and Terry Willisko, were more than eager. More importantly, our crew embraced the noise, distraction, and constant movement in an environment that usually requires quiet and still participants. Uncle Dave Fenson was also along for the foray, making it a memorable trip for the family.

Six dozen full-bodied darks, two dozen Final Approach silhouettes, and a dozen duck decoys were strategically placed. Two stand-up blinds were set up end to end, creating the perfect runway for the girls to run back and forth and stay concealed. Addy and Maya wanted to take part in every aspect of the hunt. They placed willows on the blind, put decoys on stakes, and set up the full-bodied duck decoys without help.

It was 73°F, and we were unsure what to expect from the birds on such a lovely fall day. My brother Dave sat on the far end of the blinds to accommodate his left-handed Benelli Super Black Eagle 3 (SBE 3). I handled the other door with a right-handed version of the SBE 3. My wife Stef, not wanting to be left out, was shooting a Benelli ETHOS. 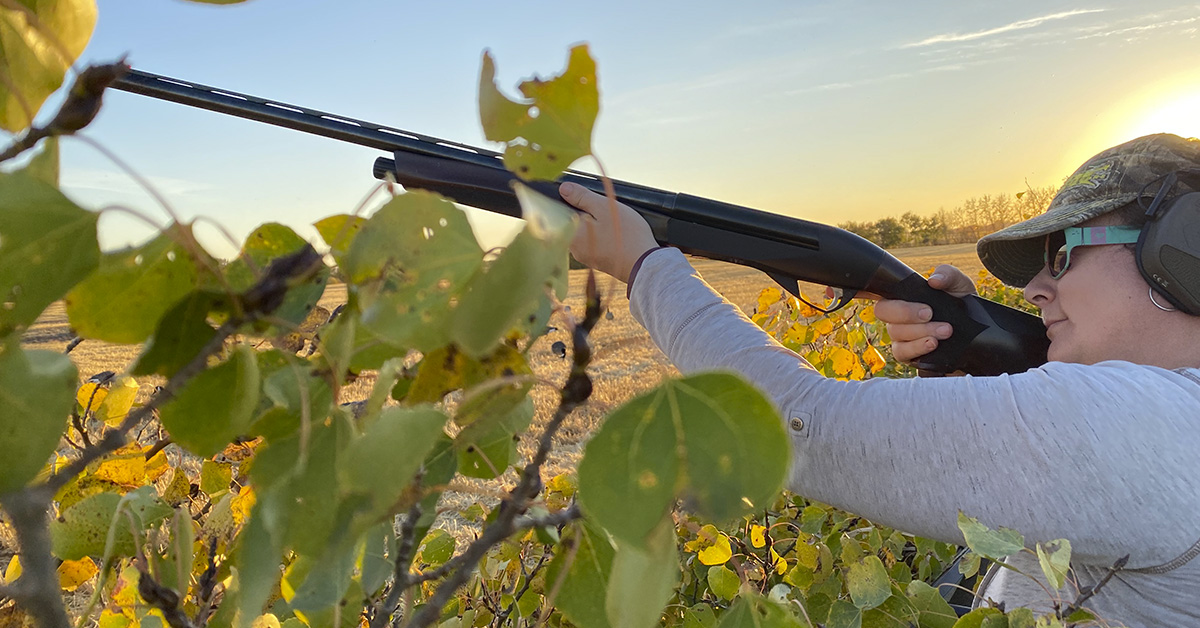 We had not been in the blind half an hour when a flock of specks appeared on the skyline. The squeaks and squawks were easy to identify. Josh and I started calling, and the flock of 15 centered on our decoys, set their wings, and came gliding in as though scripted. I whispered to Stef to pick out a bird on the left flank and focus on it. At the same time, I ensured the girls had hearing protection properly placed before any shooting started. The flock was at 20 yards when I yelled the command to shoot. A barrage of shotgun blasts filled the air, and nine specks dropped from the flock. Stef hammered her bird and maybe a second with her trusty Ethos. Maya and Addy jumped up and down with enthusiasm after watching the action unfold.

Both girls shrieked with excitement and asked if they could help retrieve the downed geese. The tornado of twins ran through the decoys like a couple of bumblebees working a flower patch. When I looked back at the blind, our hunting partners were smiling, laughing, and enjoying the show. We had to hustle the girls back into cover as more birds edged near our field.

A flock of pintails buzzed us, and the far side of the blind knocked several to the ground. Dave shot well with his new left-handed SBE 3. The shotgun fit him perfectly, and he centered his pattern with the first shot. The girls acted liked trained retrievers, asking if they could pick up the birds every time a shotgun sounded. We had 20 birds on the ground in less than 40 minutes, and it was not even primetime. 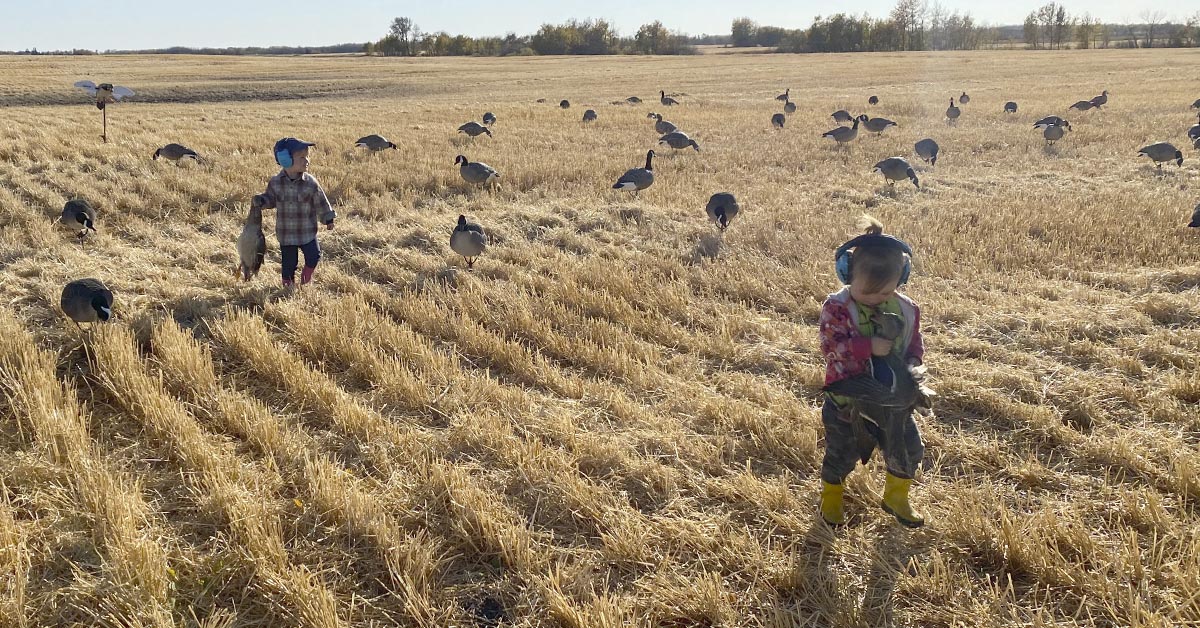 A small group of specks worked the decoys, and we added four more to the count. Within seconds, a flock of snow geese appeared and swung over the decoys for a closer look. Two white birds hit the ground. Just when we thought it could not get much better, a flock of honkers came in and we drained the whole batch. Addy came out to help with the birds by pulling on a foot as hard as she could, but the big honker would not budge. A compromise allowed her to hold one leg while dad did the heavy lifting. We just got back to the blind when a second wave of Canada geese came in, and we added them to our bag.

The mallards started to fly, and there were thousands of birds in the sky for a while. We put nine ducks in the decoys and sent the twin retrievers out to clean up. The hardest part about the bird recovery was getting the girls back into the blind. The giggles and laughter were distracting, but nobody cared that birds were flaring away from the field. 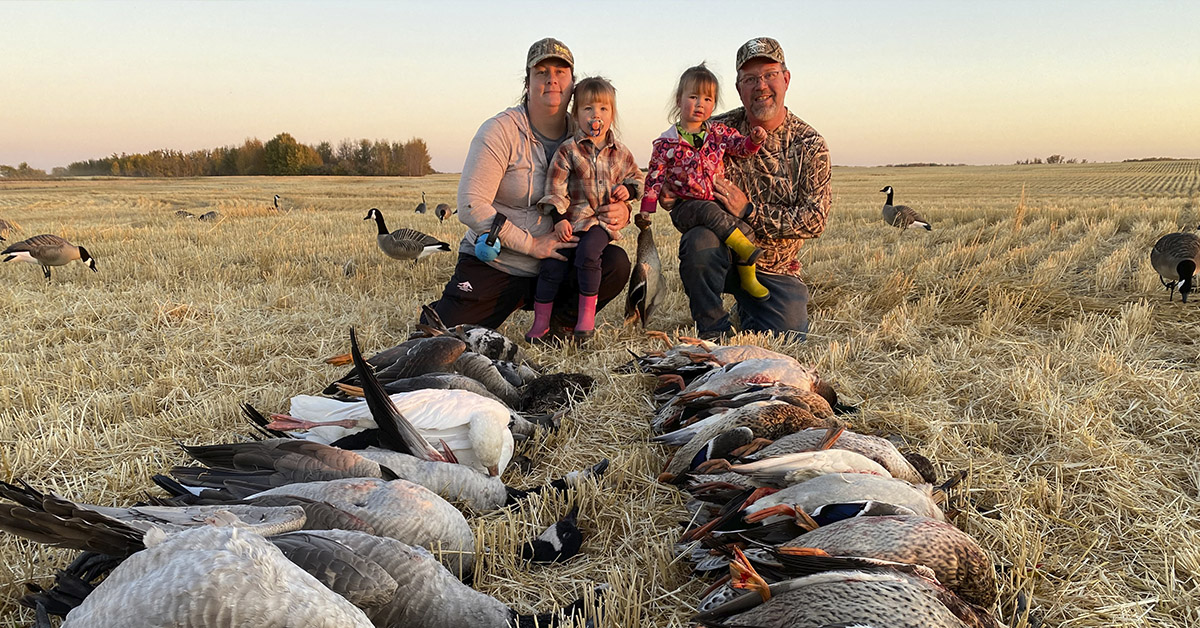 One more big flock of mallards left all of us overwhelmed with success. There were 15 specks, nine honkers, and 31 ducks to round out the afternoon. We decided to quit shooting early to enjoy time with the girls and take pictures. The sunset was outstanding, and we collected the decoys and birds long before the sun disappeared below the horizon.

Addy woke up four mornings in a row, asking if we could go hunt birds. Maya had worn a quilted jacket, and when I tried to put it on her to play in the yard, she said, “No, daddy, that is my goose hunting jacket.”

Life is rewarding with the right blend of friends and family. Sharing outdoor experiences with our girls will have them strategizing on the layout of the decoys in future years.

When time is limited and precious, make sure to use a reliable shotgun. The Benelli SBE 3 has proven to be a workhorse, adaptable to any wing shooting. Stef shoots the ETHOS so well that she will never give it up, and I don’t blame her. It does not accept 3 ½-inch shells, but she prefers to stay away from the heavy loads.

The SBE 3 was a complete redesign of the esteemed Super Black Eagle platform. Benelli design engineers focused on three areas of importance to the veteran waterfowler. They took ten years to get it perfect. The new SBE 3 design features improved ergonomics, with intuitive and flawless functionality. The updated design has a style and feel for the latest in modern waterfowling reliability. The last is the game-changer, which is absolute superiority in the most unforgiving conditions.

The Super Black Eagle 3 is chambered for 3 ½-inch shotshells. As my brother Dave will attest, the southpaw model was engineered explicitly for those who shoulder firearms on the left side. He swears it is the most intuitive shotgun he has ever used. The SBE3 is available in Realtree® Max-5™ camo pattern or a black synthetic stock.

Shooters who enjoy a lightweight, easy-to-swing shotgun will love the new 20-gauge SBE 3. The same all-weather performance and reliability of the tried and tested 12-gauge is now in a true 20-gauge platform. The 20-gauge is chambered to accept up to 3-inch shells. At 5.8 pounds, the sub-gauge is light and practical, available in Black Synthetic, Mossy Oak Bottomland, Realtree Max-5, and GORE OPTIFADE Waterfowl Timber. 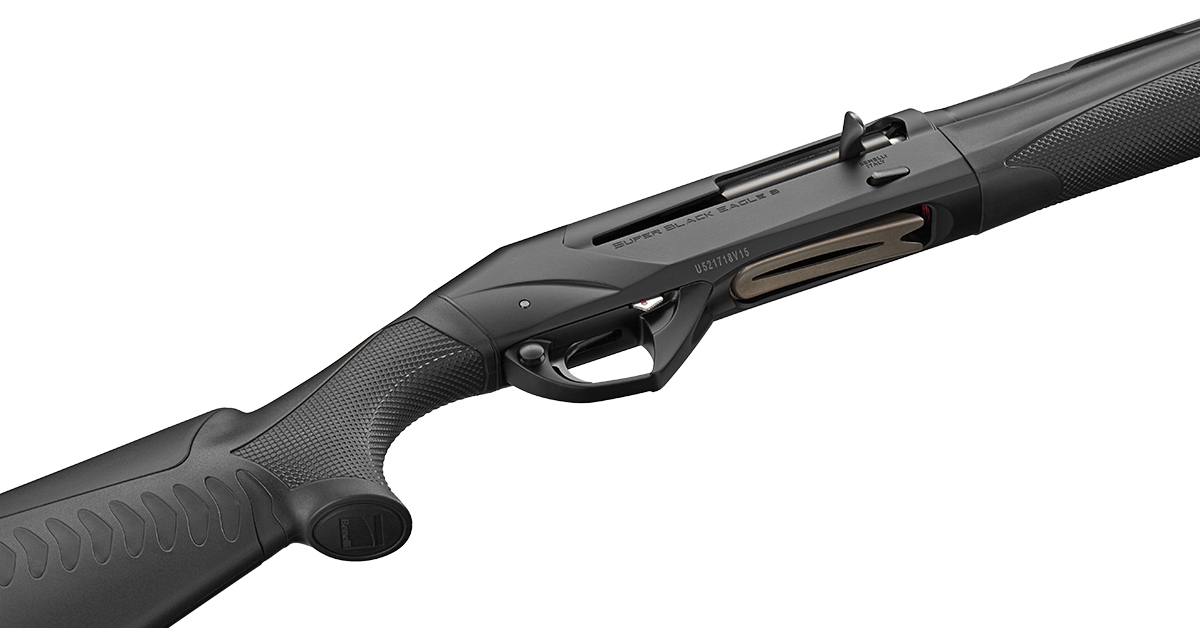 The SBE 3 works to reduce felt recoil, allowing the shooter to manage the firearm for quick follow-up shots. Everything from the stock, recoil pad, and cheek pad are engineered to reduce recoil and contact.

The best-known feature of Benelli’s strong and reliable platform is the clean-burning Inertia Driven System that never requires adjusting and cycles consistently under any conditions. The system handles everything from light field loads to 3½-inch magnums. 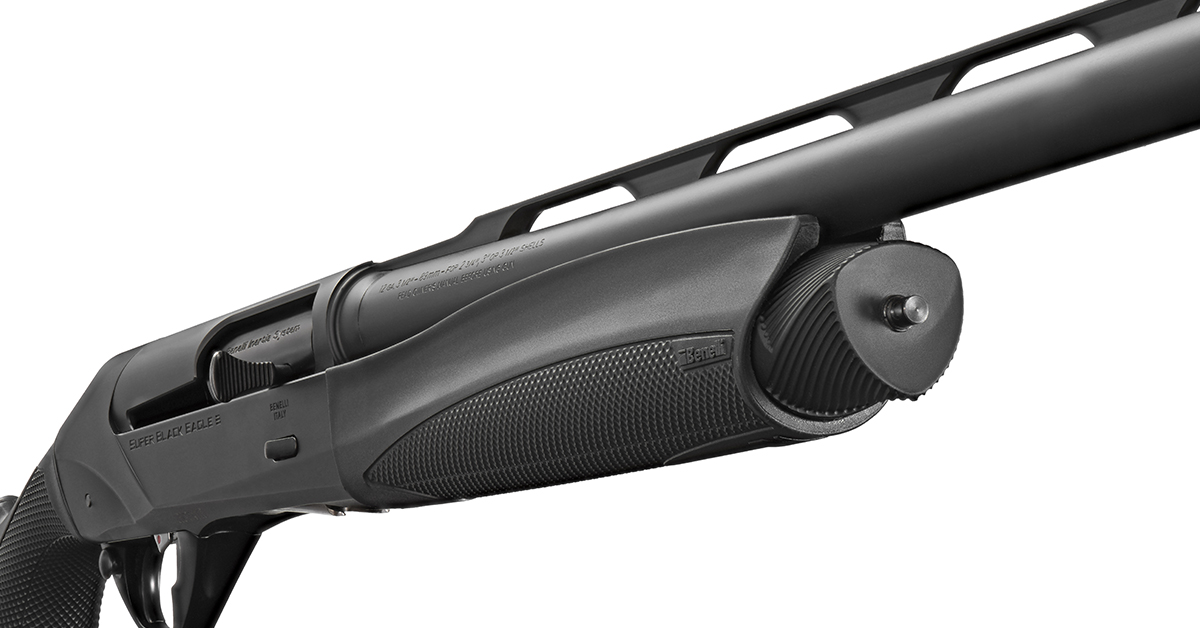 Benelli cryogenically treats its Crio shotgun barrels by freezing the metal to -300°F, which relieves the stress from the heat and hammer forging that creates it. The result is a smooth and uniform surface along which the wads and shot travel. Cryogenically treating the barrels is also done with chokes to match the shotgun barrels, making the Crio System. The choke tubes are extra-long, allowing the shot to be constricted gradually. The extra length in the choke, coupled with reduced friction through the entire bore, puts more pellets on target with consistent and uniform patterns. 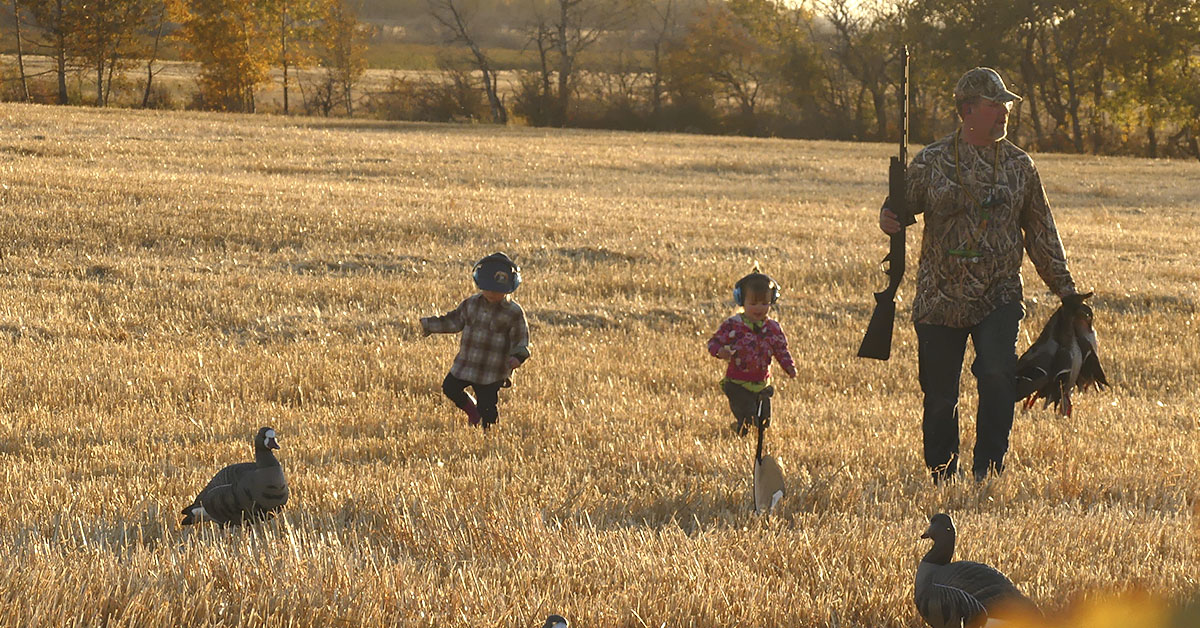 Raise Them Right is all about the future of our country and getting kids outdoors. Shooting, hunting, hiking, and other outdoor events are core activities to build strong, educated, and appreciative generations for the future. It is a challenge for the next generation to understand and appreciate life beyond an urban setting or electronics.

Fathers In the Field is behind Raise Them Right and strives to organize volunteers to take fatherless boys hunting. Raise Them Right elevates and promotes positive nurturing of today’s youth to ensure a fulfilling and prosperous future for our nation’s young men and women. Get involved today!

The new Deluxe Dove Belt from ALPS OutdoorZ features two “hold-open” shell pockets that flank the hunter’s torso to keep ammo close at hand when the action gets frantic. Use one pocket for live shotshells and the other for empties. A two-inch web belt supports the rugged pockets with a tough and adjustable buckle. There is also a large game pouch for bird storage. The pouch features a TechMesh bottom to provide airflow and easy clean-out. There is a separate water bottle pocket. All pockets can be removed and adjusted for custom performance and easy cleaning. The belt is made of durable 600D fabric in either Brown or Mossy Oak Shadow Grass Habitat™ camo. Overall weight is 1 lb., 12 oz. 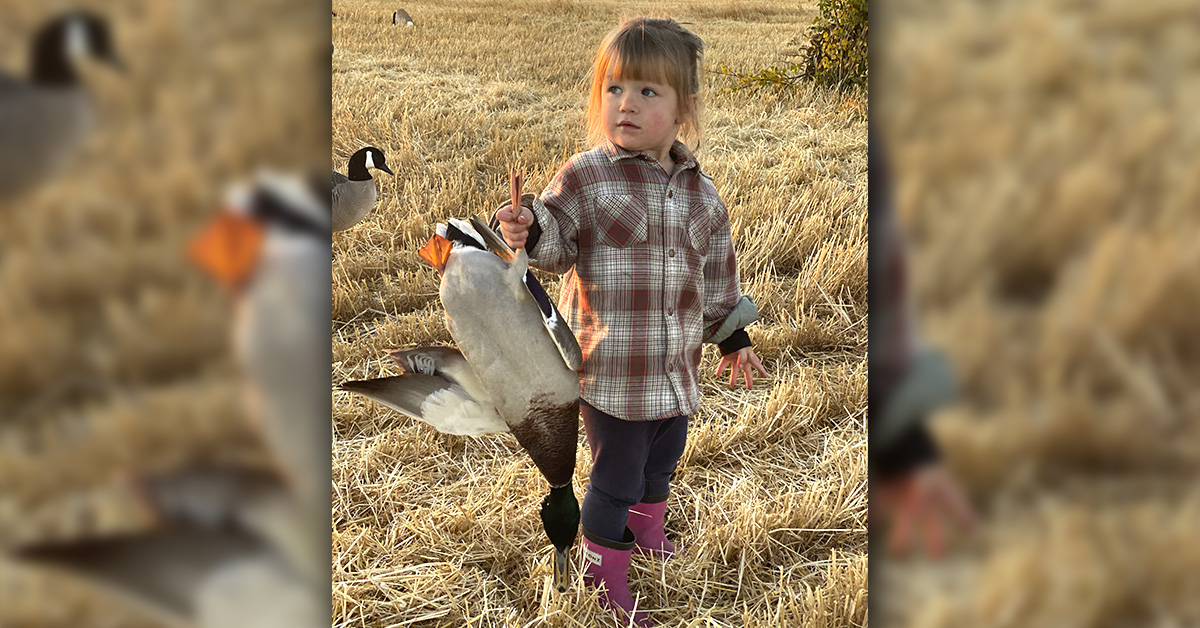