Optics have become part-and-parcel for the AR platform, but that doesn’t negate the need for an open-sight option

As the AR-15 has transitioned over the years from a civilian personal defense firearm to include such missions as long-range steel banging, varmint busting, run-and-gun competition, big-game hunting, and everything in-between, it is understandable that optics have merged onto the platform in a big way. From micro red dots to high-magnification dial-a-dope scopes, most shooters seem to favor some form of optic on their ARs. Go to a public range anywhere in the country and there’s a good chance that the majority of the ARs you’ll see on the line will have some sort of glass sitting atop the Picatinny rail. Increasingly, that glass is going to be big.

The only issue with running a magnifying optic is that it often presents a problem for those who want their AR to be a dual-purpose rifle. After all, no matter the primary mission of the rifle—precision long-range shooting, hunting, or whatever—the AR, by virtue of its design, action, and magazine capacity, always stands ready as a defensive firearm. Defensive rifle scenarios, in most cases, though, mean close quarters. That’s a situation where most magnified optics perform exceedingly poorly.

Red dot fans have long employed the “backup sight work-around” for ensuring their ARs will keep them in the game should their electro-optic fail them. Forward-thinking shooters install flip-up backup iron sights (BUIS) that either co-witness to their optic or are at least visible through their optic. This way, if the electronics take a dive, they always have a sight system that will never clock out on them.

Rifle scopes, though, whether an LVPO (low power variable optic) or a conventional high magnification scope, present a bit of a challenge when paired with BUIS versus red dot/BUIS combos. The reason is that BUIS mounted on top of the gun (in-line, as they would be with a red dot) typically won’t work with magnified optics. The magnified glass, the overall size of the scope, and the mounting system simply don’t allow for in-line BUIS. 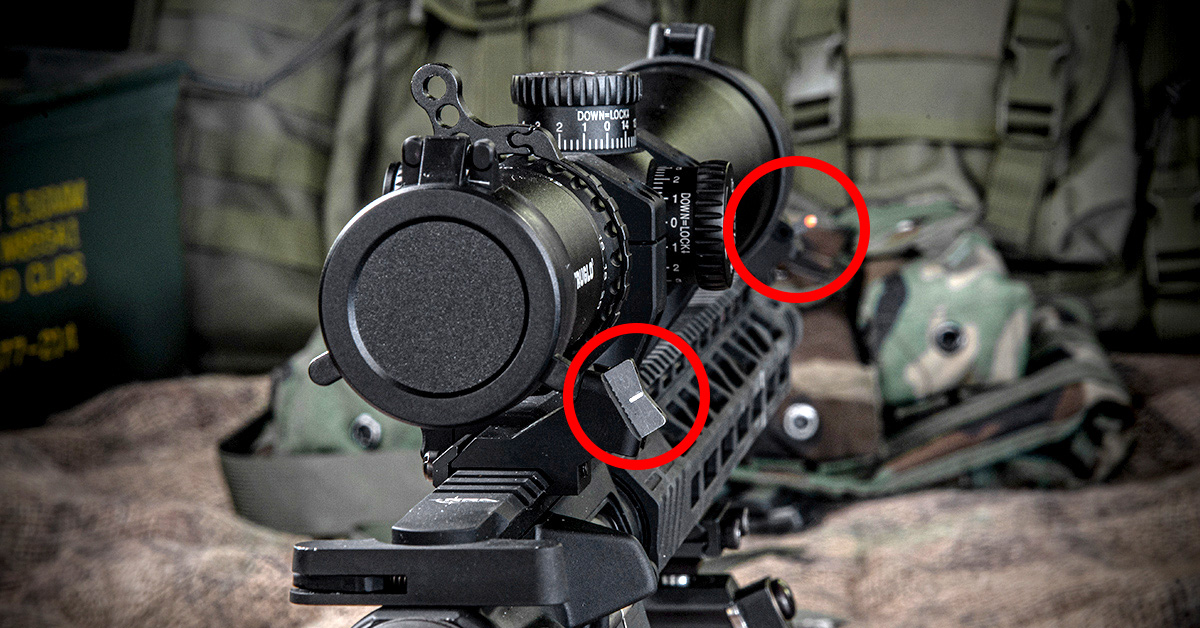 The solution comes by offsetting the BUIS onto a different plane, typically 45 degrees either left or right, depending on your eye/hand dominance. If you’ve seen videos or photos of competitive shooters rotating their rifles to engage close targets, you’ve seen offset BUIS in action. With an offset BUIS system, scoped ARs can satisfy the close quarter battle mission should the need arise. 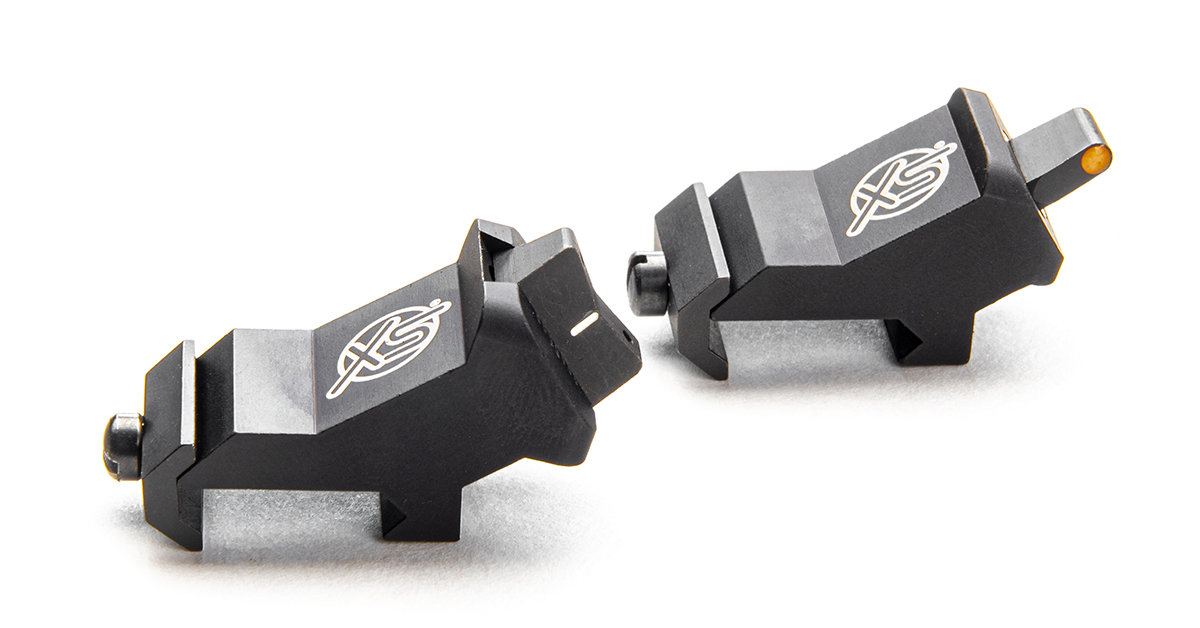 Offset BUIS, like XS Sights’ XTI2 model seen here, are ideally suited for ARs sporting heavy optics. This is the second-generation XTI BUIS, which was redesigned specifically to work with the high-magnification scopes that have become so popular on today’s ARs. 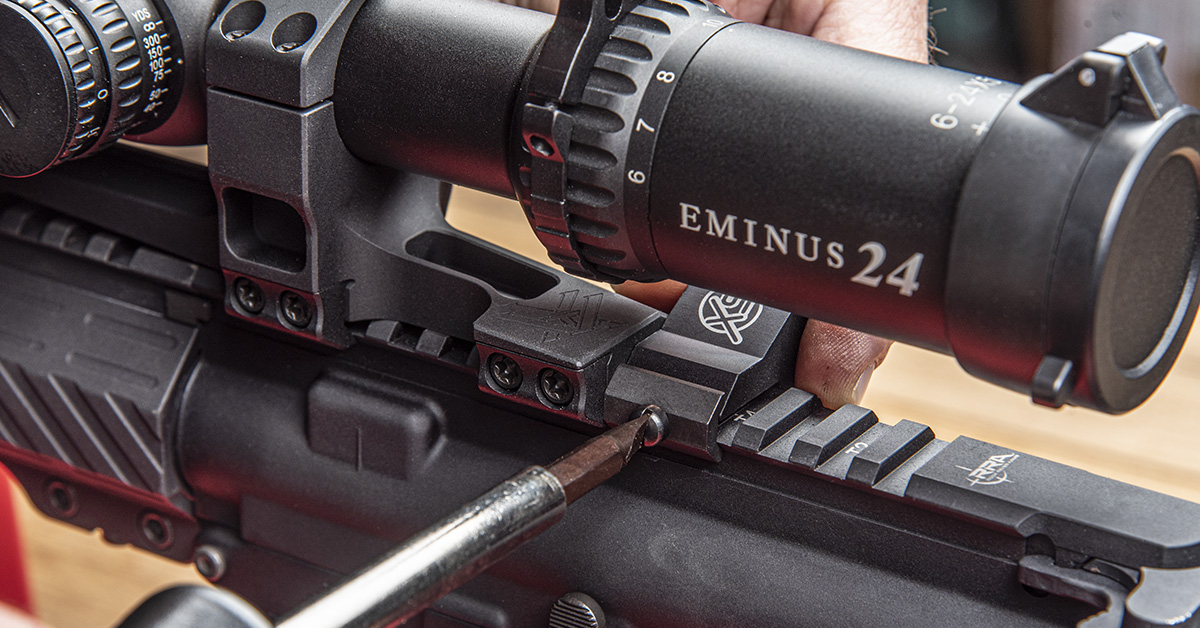 Installation of the XTI2 is simple enough. Both the front and rear sights utilize the familiar screw/clamp system to attach to the rifle’s Picatinny top rail. The kit includes thread locking compound to prevent the screws from backing out under hard use. Just be sure to clean the threads with denatured alcohol prior to installation to ensure good adhesion of the thread locker. 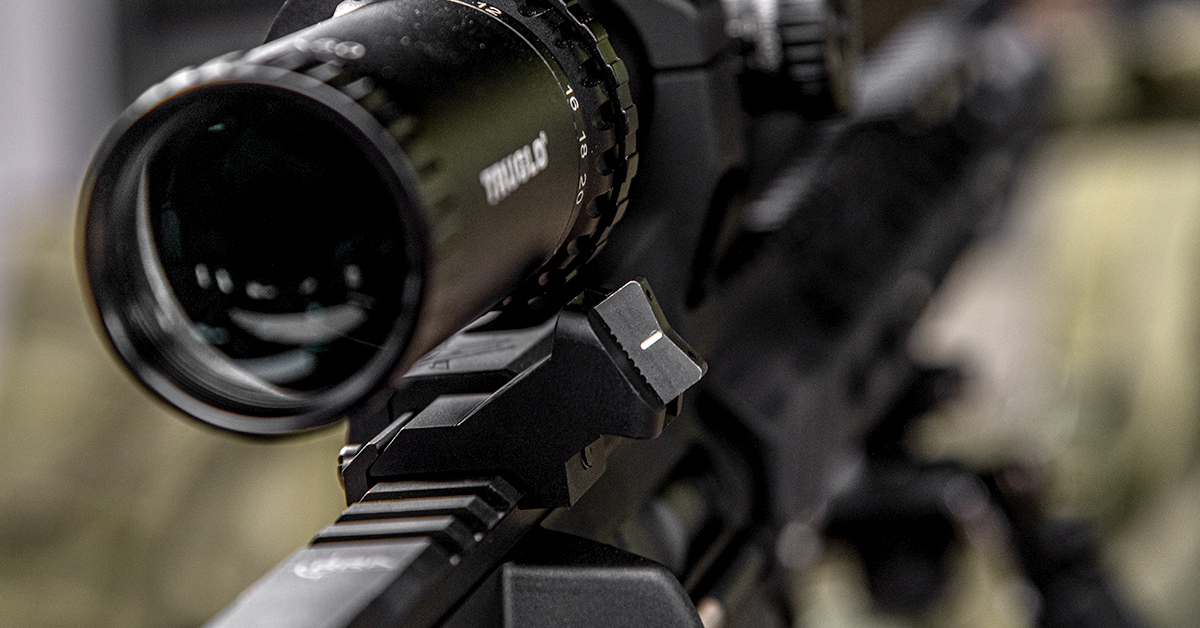 The 6061 T6 aluminum base of the XTI2 is slightly taller and features a more obtuse angle than the previous design to better clearance scopes with large ocular and objective lens bells and to provide a clear, fast-acquisition sight picture.

One feature we really like about the XTI2 is that it utilizes an express-style rear sight blade rather than a rear peep that is typical with most BUIS. The shallow “V-notch” profile and bright white center stripe combined with the large, orange front sight bead allows you to quickly align the sight on target in a fast-paced, close-quarter engagement, which is precisely how these sights are intended to be used. 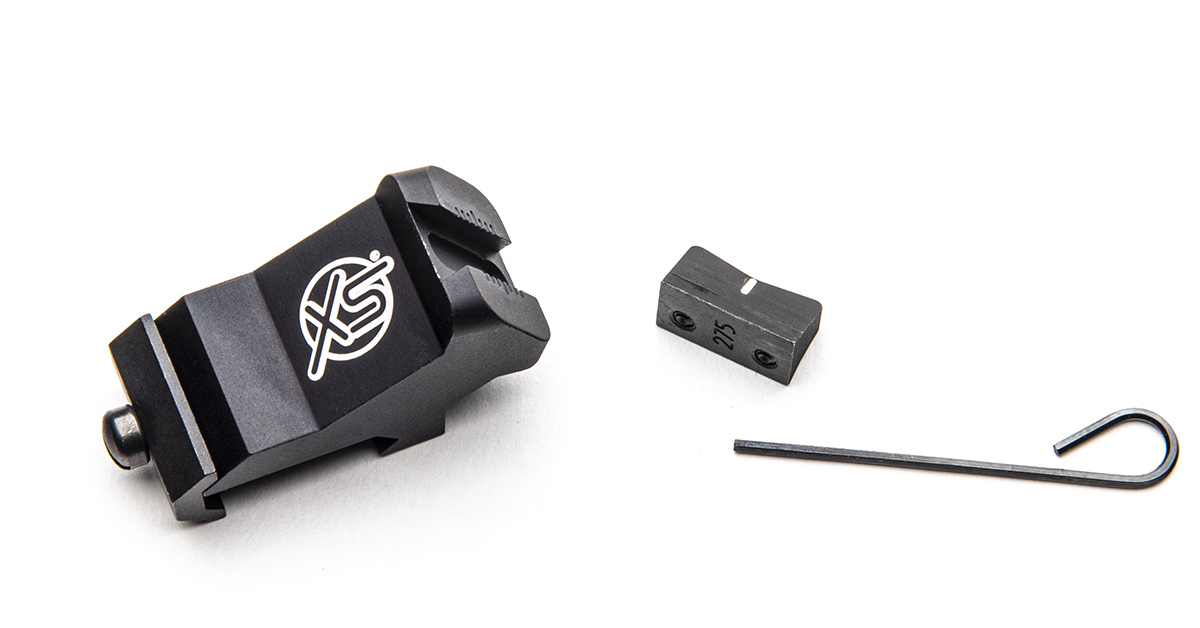 The XTI2 is drift-adjustable for windage. Loosen the two small set screws in the blade to move the sight left or right and then use the supplied wrench to secure them in place. When zeroing the rifle, establish the correct position of the blade in the base. Remove one set screw, clean the threads with denatured alcohol, apply a small drop of thread locking compound to the screw, and tighten. Repeat for the second set screw. 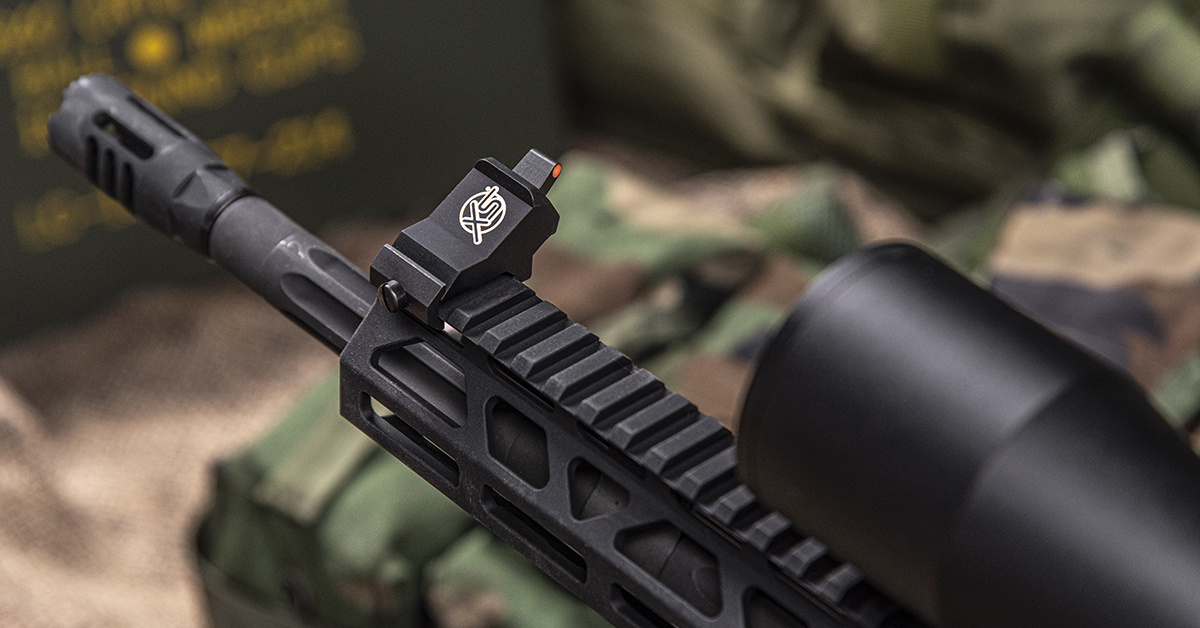 The front sight of the XTI2 boasts a high-visibility front bead that is also photoluminescent, so it stands out in low light conditions and is quite prominent in the sight picture, making it easy to get on target with the V-notch rear sight. A front sight tool is included for making elevation adjustments. 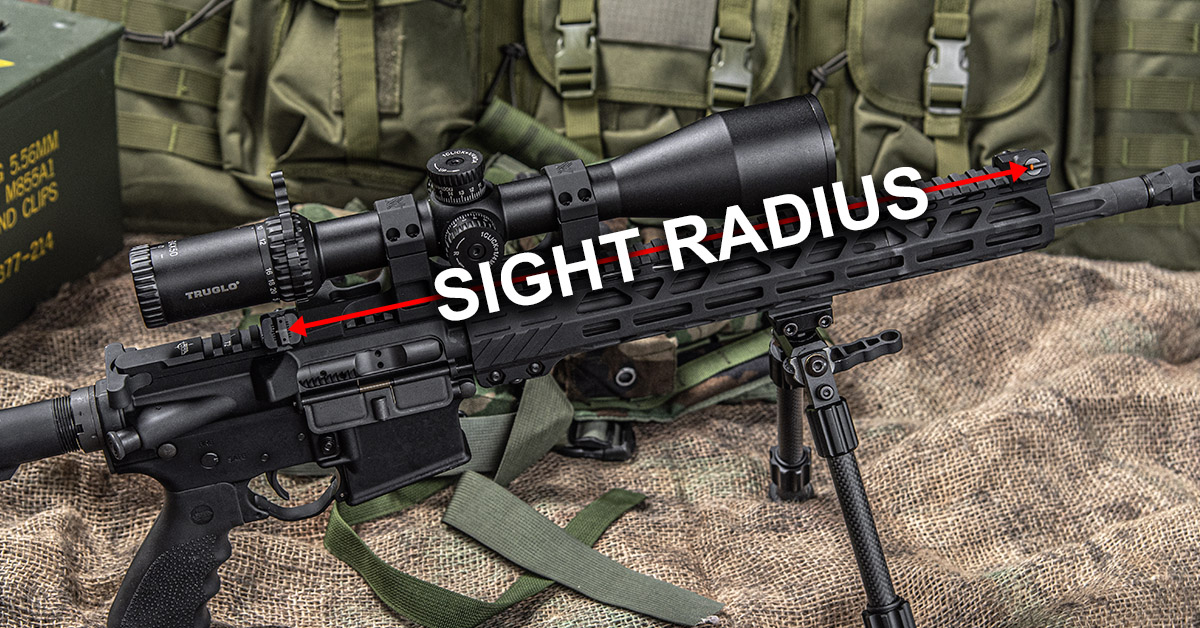 Mounting the XTI2 sights, as with any offset BUIS system, takes some planning. One of the key considerations is the sight radius, or the distance between the front and rear sight. A longer sight radius promotes more critical sight alignment (and subsequently improves accuracy potential) than does a shorter sight radius. Since the front sight will be a fixed variable (the forward-most position on the Picatinny rail), the sight radius is going to depend on where you place the rear sight.

That decision will largely depend on the optic mount you use and your shooting preference. A solid-base cantilever mount such as the one seen here means the rear sight will be mounted either in front of or behind the optic mount. For my preference, placing the rear sight in front of the mount translates to a too-short sight radius. There’s nothing wrong with that shorter radius given the close-quarter shooting intent of the BUIS, but I simply prefer a bit more distance between the front and rear sight.

Most scope setups will offer ample room behind the scope mount to place the rear BUIS, but there is a problem placing the sight too far back and too close to your eye. The closer the rear sight is to your eye the blurrier it becomes and the more difficult it is to reliably align it with the front sight. That’s due to depth-of-field and the inability of our eyes to focus on two different focal planes. Since we always focus on the front sight, the closer the rear sight is to our eye the more the front sight blurs and the more challenging it is to establish good sight alignment. 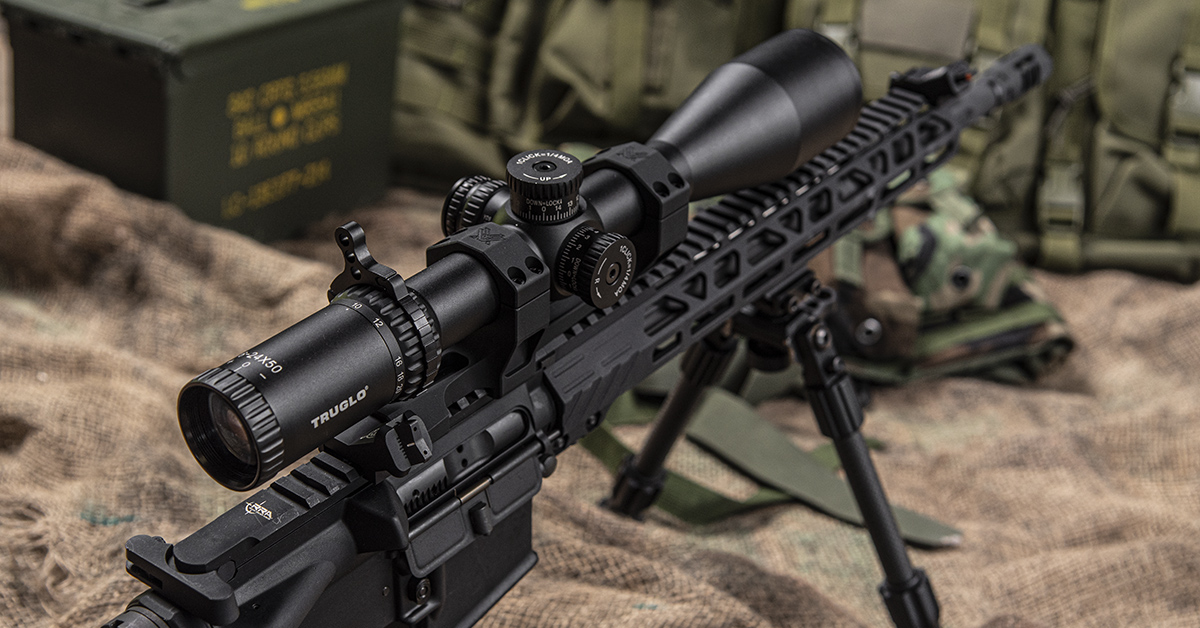 The point is, you’ll want to experiment with the rear sight placement to find the position that is best for you and your intended use and shooting style. For this setup, I found that placing the XTI2 rear sight directly behind the scope mount offered the best position. As with most things, results may vary.

For more info on the XT12 offset BUIS sight from XS Sights or to explore the company’s numerous sight solutions for long guns and handguns, visit XSSights.com.