Eventually, the palm leaves and grass shifted and stirred up ahead, giving away the hogs’ location. They were on a near-intercept course. I pulled back the hammer on my Taurus Raging Hunter and tracked the lead “wake.” As the tuskers drifted to my left, the flank of a large sow flashed darkly in the high grass. The .44 Magnum roared across the marshy pasture, scattering the hogs as a hazy Florida sun settled behind the trees.

This wasn’t my first giddy-up hunting with a handgun, but it was just as exciting as the hunt before and the hunt before that. Pursuing big critters with a revolver is just plain fun regardless of what you are after because, in most cases, it’s a close game. Sure, you can plop a scope on a hunting revolver and stretch your kill zone beyond a hundred yards if your setup has the juice for it, but the real challenge of a handgun is getting in tight to your quarry and executing a clean, ethical shot with a firearm you can carry on your hip or in a chest rig.

Trust me…once you try it, you’ll be hooked.

Responsible handgun hunting for medium- and large-sized game demands a cartridge that delivers on four key areas: terminal performance, effective range, accuracy potential, and shooter control. All are important when choosing a revolver for hunting, but control is really the first base consideration because if you can’t manage the gun, the rest hardly matter.

The first-time handgun hunter might lean toward the oft-erroneous adage that “bigger is better.” Eh…not necessarily. On the power bell curve of popular hunting revolver loads, we find the .357 Magnum on the low left, the more powerful.44 Remington Magnum at the top, and the fire-belching .460 S&W on the low right. In-between is the .41 Remington Magnum (left) and the .454 Casull (right). The .357 Magnum is the easiest of the lot to shoot for most folks, with its modest recoil and muzzle blast. The .460 S&W, by contrast, has been known to make otherwise burly men (and burly women!) cry for their mommas.

Guns that are too violent for a shooter are going to cause problems like flinching and introduce all manner of poor shooting techniques that ultimately result in the inability to hit your target. Yes, a big-bore hand cannon may take the charge out of an angry brown bear, but it is all for naught if the gun is so harsh that you can’t put lead into the vitals.

This is one of the reasons why the .44 Magnum is the most popular cartridge for general handgun hunting of critters like hogs, deer, and bear. With a load exhibiting good ballistics and terminal performance, the .44 Magnum is a proven game getter that finds that sweet spot of power, accuracy, and control that most shooters find agreeable.

As with any firearm, the terminal performance of a hunting handgun cartridge is dependent upon many variables, including bullet velocity, bullet weight, and bullet design. Effective range for the species being hunted is also an unavoidable variable. For close-in work, say, 50 to 75 yards and under, the .357 Magnum will get the job done on medium-sized game given a dedicated hunting load. In the hands of an experienced shooter with the skill to confidently put a round in the boilermaker, that distance can ethically stretch a bit further.

The development of the .460 S&W, on the other hand, significantly moved the goal post of hunting handgun performance. Compare, for example, Hornady’s .460 S&W 200 grain Monoflex Handgun Hunter, boasting a 100-yard velocity of 1701 fps and energy of 1286 ft/lbs, with the company’s .357 Magnum 130 grain Monoflex Handgun Hunter delivering 1015 fps and 297 ft/lbs at the same distance. Obviously, the .460 S&W has the reach and the WHAM for dropping game as far as most hunters can shoot with ethical accuracy. So, if you intend to hunt BIG whitetail fields or pursue western game where shots will likely extend beyond 100 yards, then you may want to look at the super magnum end of the hunting cartridge spectrum.

But only if you can effectively manage such brute loads.

Again, accuracy is primary regardless of the platform you choose. If your ability to shoot accurately with a handgun is limited to 50 or 100 yards, for instance, then a .357 Magnum, .41 Remington Magnum, or .44 Remington Magnum with a good load is all the stick you need to hunt deer.

And, truthfully, it’s important to keep in mind why you want to hunt with a revolver. If it is the challenge, then your focus should probably be on short-range performance and the lighter weight and mobility that comes from hunting with a handgun. 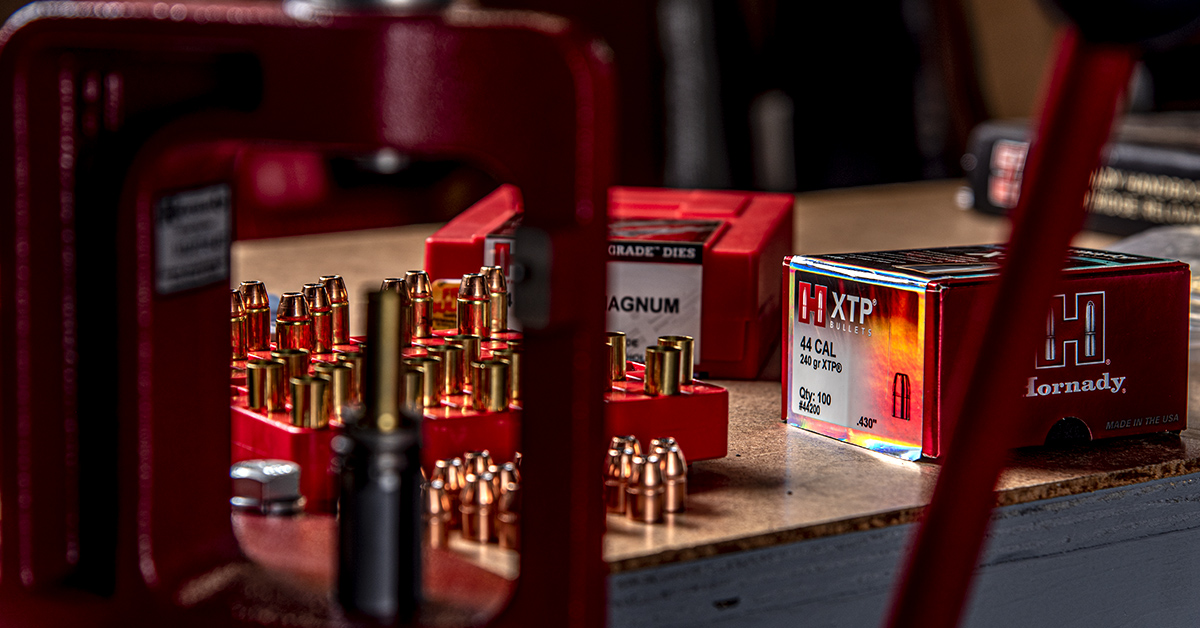 The other fun factor of hunting with a revolver is developing your own loads. Handloading straight wall handgun cartridges is easy, and as with rifle cartridges, the load makeup of powder type, charge weight, bullet type and weight, and the several nuanced variables that go along with load development can really let you dial in the perfect load for your revolver and hunting mission.

Once you’ve settled on a hunting cartridge, you’ll need to consider the type of sighting system you’ll want to use because this may influence the gun you purchase. For a dedicated hunting revolver, I like a ready-to-roll model so I can easily drop an optic on top and go. 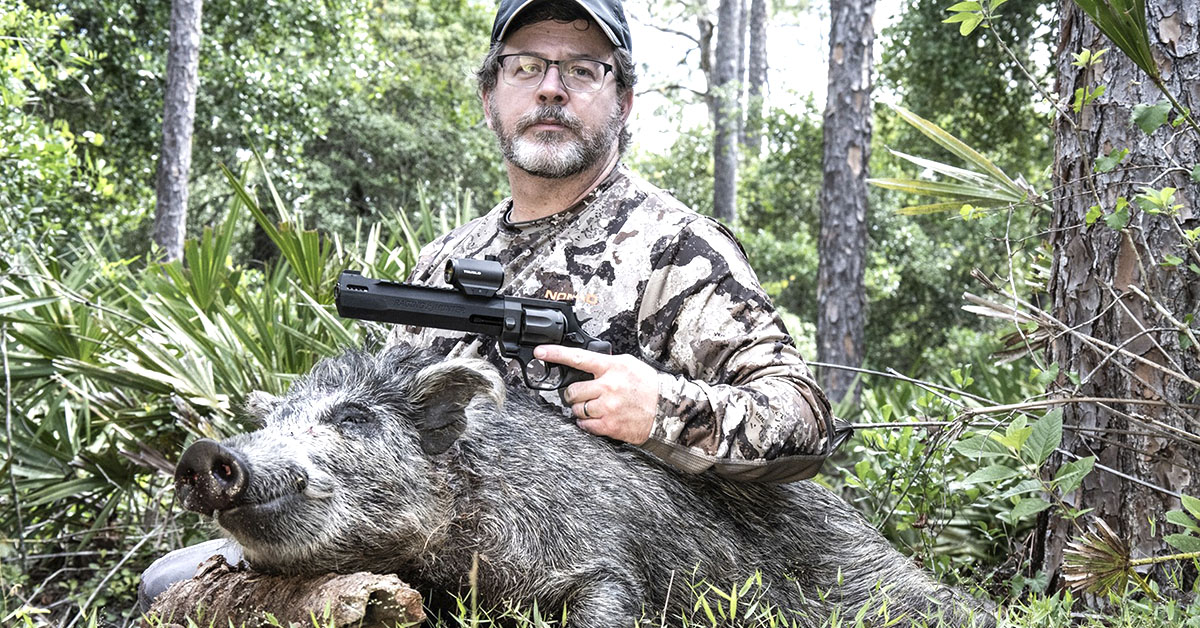 A good example of this is the Raging Hunter line of revolvers from Taurus. These guns have a robust aluminum barrel shroud with an integrated top Picatinny rail, so you can mount a red dot in under a minute. For a magnified optic, just choose the Picatinny-compatible mount/rings of your choice and install.

Red dots have become a favored sight system for many handgun hunters—especially those who intend to shoot within a 100-yard window. Sight picture acquisition is super-fast, and the laser dot negates the eye relief issue of magnified optics.

For sizeable game like hogs and deer, a 2 or 3 MOA red dot offers a precise aiming point out to 100 yards. The red dot is also a big plus for hunting in low light conditions (which is often the case when deer hunting).

For the ultimate in shot placement precision, or when shooting beyond 100 yards, it’s hard to beat a magnified optic with a crisp reticle. The big decision is whether to go with a fixed power scope or a variable power. Good marksmen will argue that even with a centerfire rifle, all that’s needed for most hunting scenarios is a 4X scope. That obviously makes sense for handgun hunting given the shorter shooting distances. Nevertheless, variable power optics are offered in handgun scope platforms if that’s your preference.

One of the joys of hunting with a revolver is the light weight and ease of mobility compared to toting around a 7- to 8-lb. long gun. That’s not to say, though, that carrying a large-frame revolver with an 8-inch-plus barrel is always easy. A few mainstream and some custom holster manufactures offer solutions for big iron, including belt holsters, shoulder holsters, and chest rigs.

The challenge of holsters is finding one that will accommodate an optic, although there are some out there.

If you don’t run an optic, holster selection is much broader. Since most of my deer and hog hunting takes place in close quarters (under 40 yards), I like to run open sights and stow my Raging Hunter in Crossbreed’s Chest Rig. It’s extremely comfortable and adjustable, and it places the gun in an optimal draw position that doesn’t interfere with my daypack. 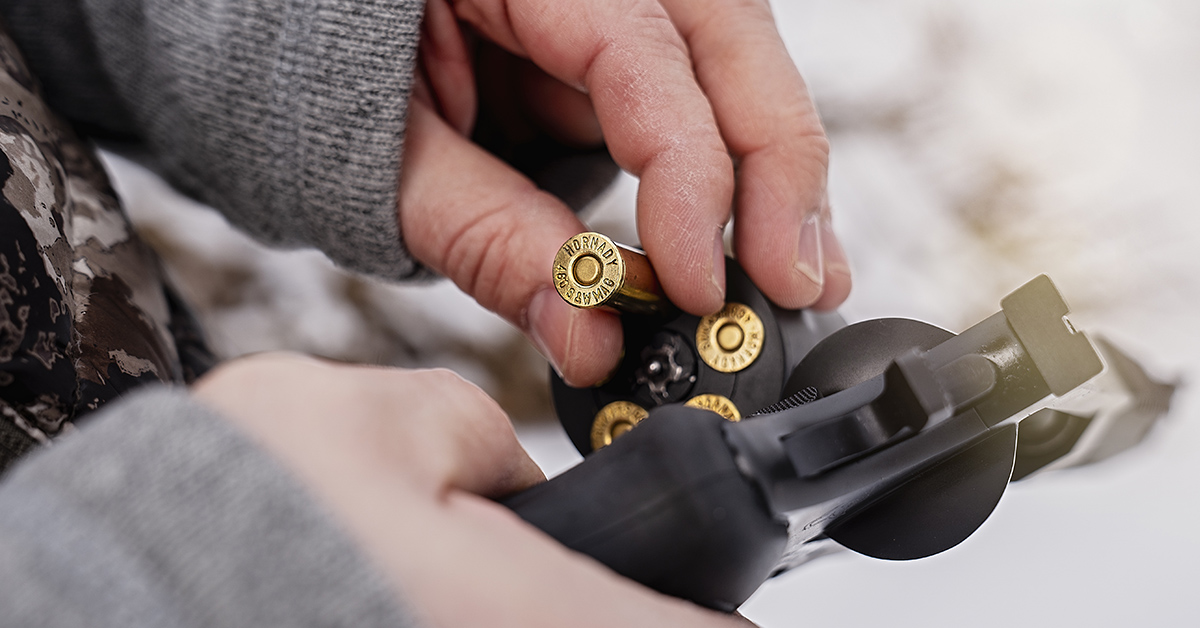 Hunting with a revolver isn’t for everyone (although there is no reason it shouldn’t be), but it definitely puts a fresh and exciting spin on our favorite pastime. The big-bore calibers also provide new opportunities for handloaders to practice their craft and to utilize an alternative ammo source at a time when centerfire rifle cartridges are difficult to come by.

Give it a try. We think you’ll be hooked!