While it may seem like you need a red dot optic on your defensive pistol, the decision to “go electro” or not comes down to a willingness to do hard time behind the gun

Peer pressure can be a heckuva thing. We all remember it from our teenage years, and it can be difficult to resist. I sort of liken the current “red dot wave” to the peer pressure of old. “Everybody’s doing it,” I’ve thought to myself, “so maybe I’m missing out on something.”

And I’m pretty sure I’m not the only one who has had such ponderings. My historical challenge with red dots reflects my overall approach to guns and gear of late. It can be defined succinctly as “less is more.” I take great pleasure in learning, practicing, and successfully implementing open sight shooting, be it with a handgun or a rifle. Developing good marksmanship techniques with the most minimal equipment instills a confidence that is simply invaluable. And the truth is, this “basics first” approach should be fundamental to everyone who wishes to become confidently proficient in their firearms disciplines.

That said, the allure of technological assists is hard to resist. Red dots optics, for example, promise a panacea for those who struggle to make good hits on target with open sight handguns. Mostly, people opt for red dots as a substitute, or shortcut, for learning good marksmanship skills (although a new shooter can typically become more accurate with a red dot a whole lot faster than they can with open sights). For others, red dot optics have become essential due to the eye’s increasing inability to clearly focus on an open front sight because of age.

In questioning the use of red dots for pistols, though, the adherents seem often to outnumber the detractors. One world-class pro shooter I talked to about the subject is a firm believer yet admitted that it took them “about a year” to become proficient with a red dot.

Coming from someone who is already on top of their game and who sends more rounds downrange in a single day than the average everyday carry practitioner likely does in a year, that’s a lot of work. Others who train for and compete in practical pistol competitions but at a lower amateur level have told me the same thing.

As for myself, I’ve dabbled with micro red dots on pistols over the years but could never convince myself that they were the way to go for many reasons.

First, I never committed myself to learning how to use them effectively for personal defense scenarios. Obtaining a fast sight picture always proved to be a challenge and, lacking any good reasons to give up open sights in favor of a red dot, I had no incentive to learn.

Second, I loathe “bulk” in a firearm, and even the smallest of red dots have always seemed to be too much add-on for me. I didn’t want to introduce something that might interfere with a comfortable carry or that could create a snag hazard when drawing from deep concealment.

Finally, there was the most common caveat of utilizing a red dot for an EDC gun—battery or optic failure. Sure, you can add open sights for use as a backup, but that, in my mind, further complicates things…like the sight picture.

For these reasons, and probably a few more, I’ve resisted the “peer pressure” and held firm with open sights.

Recently, I decided it was time to give red dots a fair chance to convince me that I should use one or not. More importantly, I wanted to see what it would take for the new pistol owner to become adept enough with a red dot that they could use one on their EDC handgun for personal defense because that, to me, is the whole enchilada. If it isn’t feasible in a short-range, fast-action, high-stress defensive scenario, then it’s probably not a good idea.

This thinking, of course, brought me back to the conversation I had with the pro shooter and how long it took them to become competent at using a red dot for competition. If it takes an already skilled or practiced shooter such a long time to master the red dot, how is it a good idea for a new pistol owner with minimal to no shooting fundamentals under their belt to start out with a red dot, as is so often the case?

With all this in mind, I decided to make myself be the experiment. I know my way around a defensive pistol, but I’m no high-level shooter—probably only slightly ahead of the bell curve in terms of training and competency. And as for competence with a red dot on a defensive pistol, you could call me a ground-zero beginner. 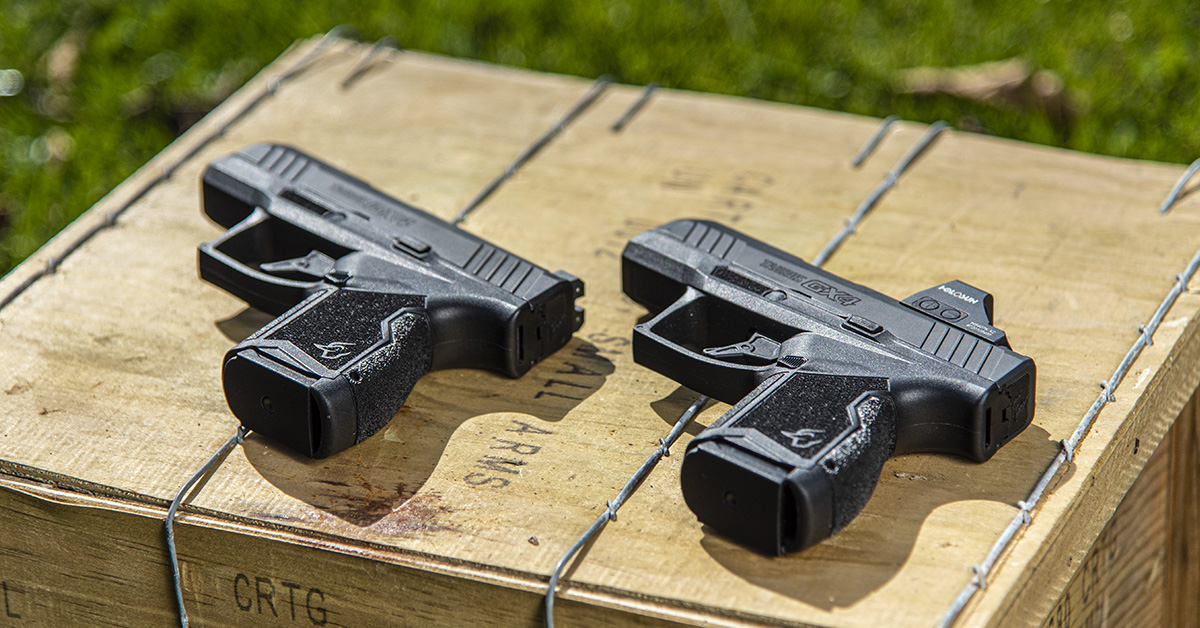 I had been carrying the GX4 as one of my primary EDC guns since the model came out in early 2021. As a compact micro pistol, I found it to be deliciously accurate within the typical self-defense range. This would be my “control” pistol as it hosted tritium R3D open sights from XS Sights.

The GX4 T.O.R.O. is the exact same platform as the original GX4 only it comes from the factory with a slide cut for use with a micro red dot. For this gun, I installed Holosun’s HS407K optic. It features a 6 MOA dot that is just the right size for this diminutive handgun.

The idea of using the exact same pistols but with different aiming systems was to eliminate anything that might influence the grip, trigger action, or other subtleties that could cause variations in draw, presentation, and trigger pull.

For the objective comparison of my personal performance between open sights and a red dot, I wanted to gauge speed and accuracy at 10 yards (30 feet). That is on the outside edge of the typical defensive encounter.

Speed would cover the beginning of the draw through the release of the firing pin, performed as fast as I could while ensuring the sights were correctly aligned on the target. My baseline speed at 10 yards for drawing the GX4 (starting with my strong hand on the grip), aligning the open sights on the target, and executing the trigger pull is around .90 seconds. 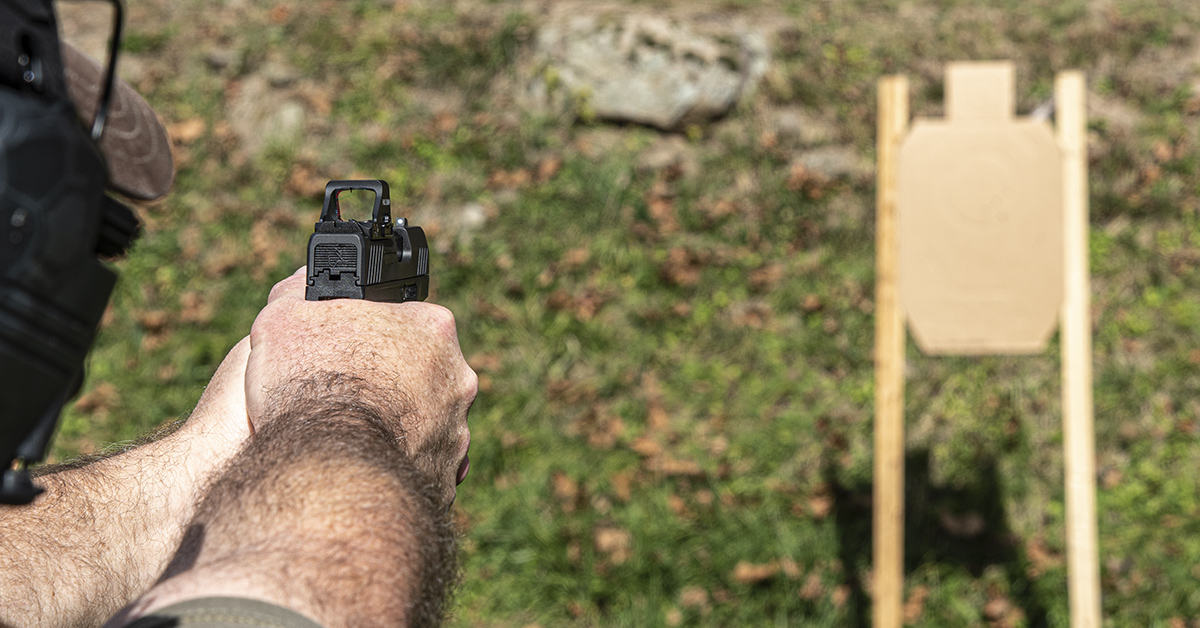 Speed with the red dot, when I began this experiment, was nowhere close to that. It was more like two seconds worth of stumbling and fumbling, trying to find the red dot and get it onto the target. What a mess!

With that unseemly performance, I at least had a place to start (ignoble as it was) and a goal to work towards. I began by breaking down my draw and presentation, going slowly and deliberately, thinking through every motion. From that, I realized that the key to obtaining a quick sight picture with a red dot is in the presentation—that final stage where you push the gun out toward the target, completing the sight alignment and pulling the trigger.

Many moons ago, I was taught to present the gun in a straight, “on a string” motion to the target such that when my arms were extended, the sights would be aligned with the target. I admit to getting a bit lazy with that form over the years, presenting with more of an arc than a straight line. While I could get away with that sloppy form using open sights, it bit me hard when using a red dot.

So, I went back to the basics, spending many hours over the course of a week to reacquire a straight presentation and dry firing the GX4 T.O.R.O. until I thought I would wear out the striker spring. And it worked. When I got to the range, I had managed to shave a good second off my draw-to-fire time (down to an average 1.08 seconds) and no more getting lost in the eye box. I could draw, present, and place the red dot on target with minimal adjustment.

As for accuracy, I’m not where I think I should be with the red dot at defensive speed. I’m shooting generally the same size groups with the red dot as with open sights, only I’m doing it at about a quarter of a second slower. Still, that is a massive improvement of where I was before diligently training with the red dot.

For those of you who are new to red dots or are just now thinking about getting one for your EDC pistol, let my experience be a guide for you:

A pistol such as the Taurus GX4 T.O.R.O. represents an ideal platform for the new red dot shooter. The factory slide cut and multiple red dot platform capability lets you try out a red dot (or multiple optics) to use and see if it is right for you. If it ultimately is not, no harm and no foul. Simple remove the optic, reinstall the cover plate, and carry on with your open sight marksmanship training.

Sometimes we all need to go back to basics.