A minimalist AR for maximum performance in a worst-case scenario

Those of you with a keen nose might have caught a subtle scent in the air of late — a whiff of back-to-basics AR-15s riding on the breeze. It seems that after decades of “have it your way” ARs bedecked with anything that could attach to a Picatinny rail or into an M-LOK slot, serious shooters and defense practitioners have begun to reassess the accessory-laden AR-15. In other words, is more necessarily better?

For a lot of shooters, the answer is a solid, “No!”

That is not to diss on those custom creations we have all built and enjoyed over the years. As purpose-built firearms for long-range shooting, competition, steel banging, and hunting go, to each his own. But when thoughts turn to simple operation, minimal weight, reduced bulk, and maximum reliability and durability under the toughest conditions, the old axiom “less is more” shines brightly.

We had already been thinking along these lines last year regarding the kind of rifles we would want in a worst-case scenario (and with the trajectory the world is on right now, what pragmatist isn’t thinking this way?). With that mindset, our mental discard pile quickly grew to include magnified optics, drop grips, red dots, lights, lasers, oversized grips, suppressors (ouch!), DMR-style stocks…pretty much all the go-to upgrades we tend to think of when customizing an AR. To be blunt, all of these can be impediments should you find yourself in a bad way for too long. Remove the bulk, the weight, the snag potentials, the electronic failures, fragile glass, and other possible complications and the odds begin to stack in your favor if the situation turns really ugly.

Then there is the issue of marksmanship. Going back to basics means reducing the potential for equipment failure and interference, but it also puts the onus on the shooter to develop core marksmanship skills — something that is too often neglected and masked over with the reliance on optics. Trimming back the handicaps and learning to shoot effectively with open sights makes sense for a no-fail defensive firearm.

While we thought we might be among the few who were “thinking backwards” like this, we were delighted when we swung by the Rock River Arms booth at this year’s SHOT show and an RRA employee introduced us to one of the company’s newest offerings, the Assurance-UTE Carbine. 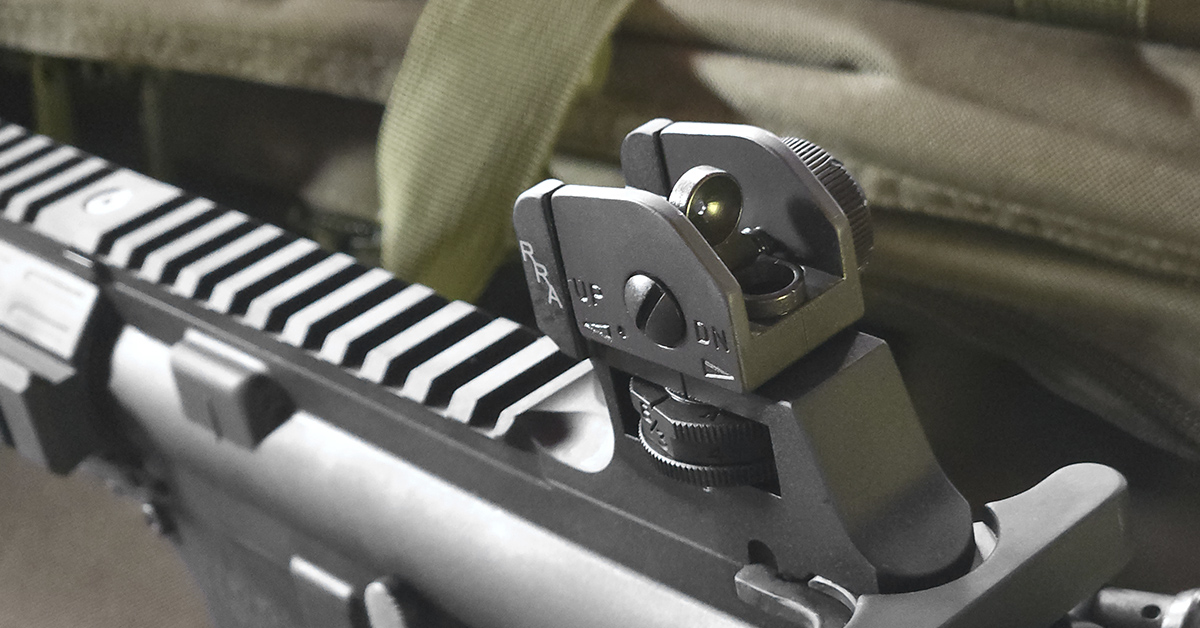 Of the three, the Assurance-UTE spoke loudly to us. This rifle comes not with a low-profile gas block, but the conventional and proven “F-marked” gas block/front sight assembly installed on the barrel.

More intriguing is the upper receiver. This is a hybrid that blends aspects of both the A2-style upper receiver (with an integrated sight but no accompanying carry handle) and the A4-style upper (Picatinny rail but no ability to remove the sight as you would with an A4 carry handle/sight). In keeping with the A2 one-piece upper and sight configuration, the Assurance-UTE utilizes the A2 sight (800/300 elevation drum with one-click-up zero) instead of the A4 sight (600/300 elevation drum with two-clicks-up zero). Nevertheless, RRA calls this a “forged A4” upper receiver.

There are two ways to argue this upper. On the one hand, the absence of an integrated carry handle means reduced bulk and a marginal weight savings. On the flip side, the sight sits quite proudly and could present a snag or bump hazard without a carry handle to serve as a deflector. Regardless of how you look at it, the sight is solid and will absolutely take the hits better than an aftermarket flip-up. 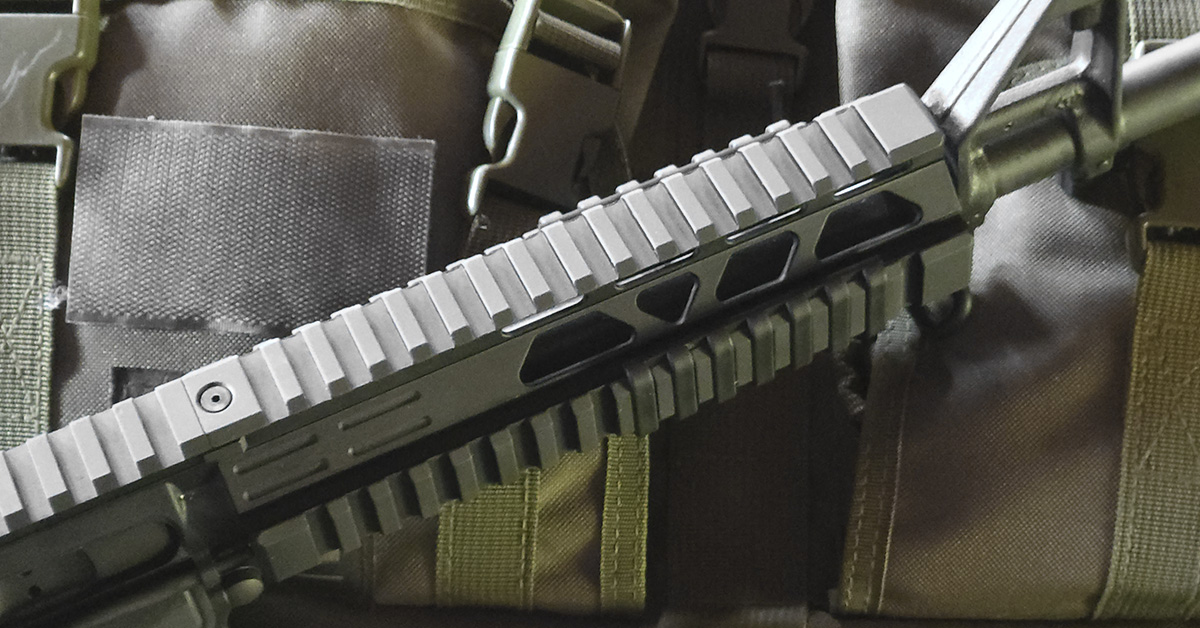 The Assurance-UTE rolls with a 16-inch lightweight chrome moly barrel in a 1:8 twist ideally suited for stabilizing 55- and 62-grain bullets. While the rifle is a pleasure to run bare, RRA conceded that some shooters may want to add to the forend and so opted for a lightweight quad rail. Those who prefer a clean carbine can install the supplied rail covers for a more comfortable grip. 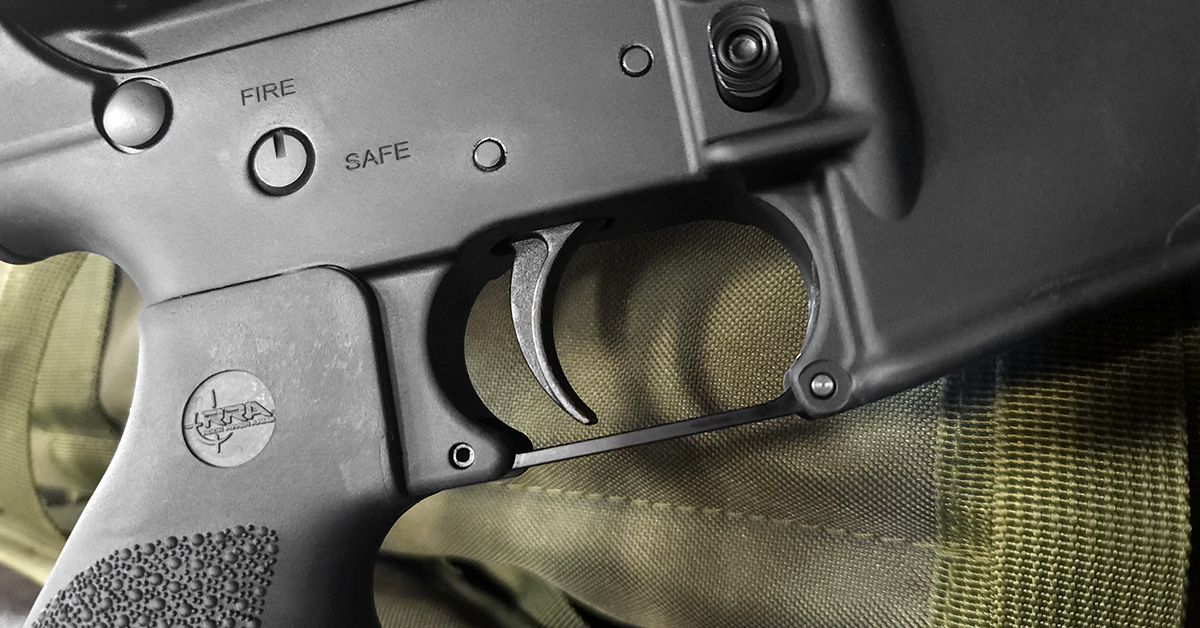 According to the firearm specs on the RRA website, the Assurance-UTE comes with the RRA two-stage Ultra Match trigger. Our test model definitely came with a single-stage trigger, not a two-stage, so we’re not sure what’s going on there. Still, the supplied single-stage trigger was not of the MILSPEC flavor. We’ve shot RRA rifles equipped with MILSPEC triggers and this was significantly better with its shorter travel, smoother engagement surface, and cleaner break. Whatever trigger they put in here, it’s ideal for a defensive platform with its 5-lb., 12.6-oz average pull weight and smart break. 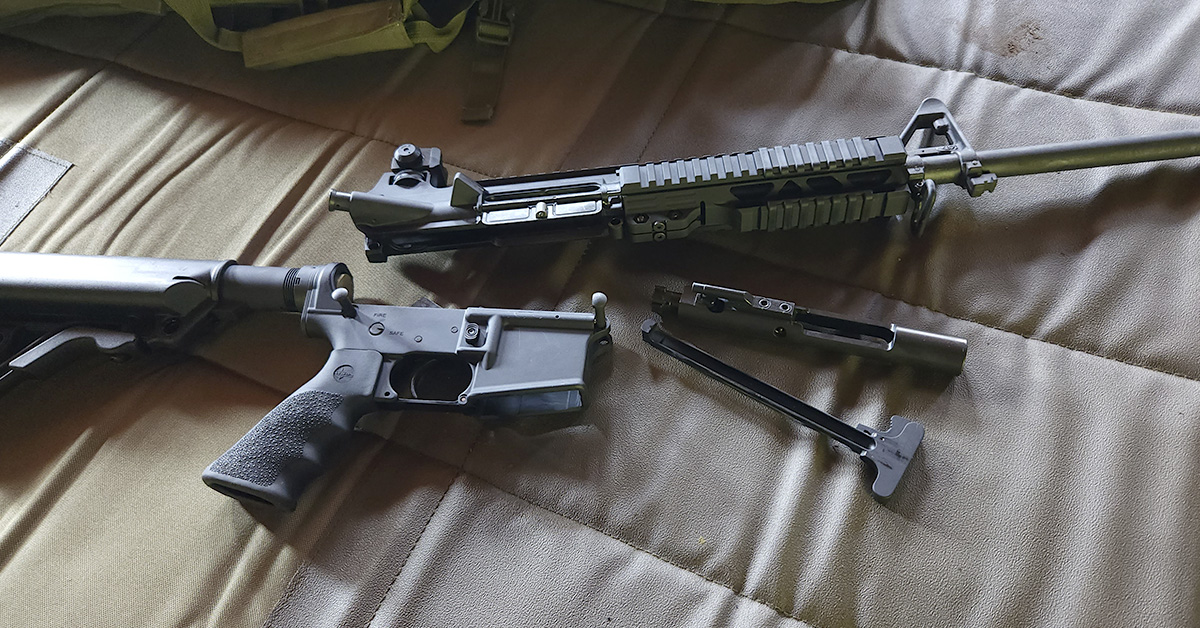 A couple of items we certainly appreciate with this otherwise bare bones carbine is the furniture. The RRA-branded Hogue rubber grip provides an absolutely luxurious shooter interface compared to the common A2 pistol grip. The grip’s contours and finger grooves offer comfortable and positive hand placement for expert trigger work while the grippy coating is a big boost for weapon control.

For the buttstock, RRA selected their 6-position Operator CAR stock. This has been another favorite of ours for some time because it offers a pleasing cheek weld, includes two QD mounting holes, and it’s not a whisker-grabber like some of the adjustable stocks on the market today. 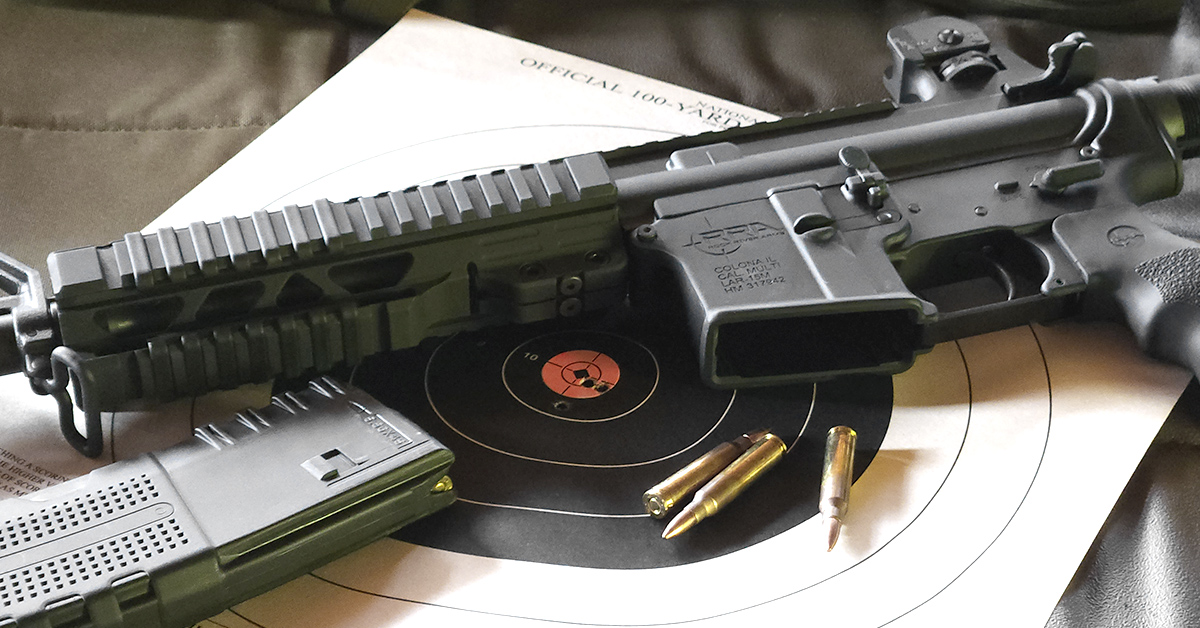 On the range, the Assurance-UTE was right at home riding the bench and when shooting from field positions. We fed it a blend of Winchester 55-grain M193 and PMC X-TAC 62-grain with no malfunctions and smooth overall performance, as expected. The tidy package transitioned easily between standing, kneeling, and prone positions, and once sighted in to a 25-meter battle zero, the carbine delivered on the downrange.

Our bench and field position testing underscored something that far too many shooters do not understand and fail to account for when dialing in their firearms — the potential shift in point-of-impact when transitioning from the bench to the field and vice-versa. Here, is the perfect example of why you should always zero and practice with your firearm in the way you intend to shoot it. 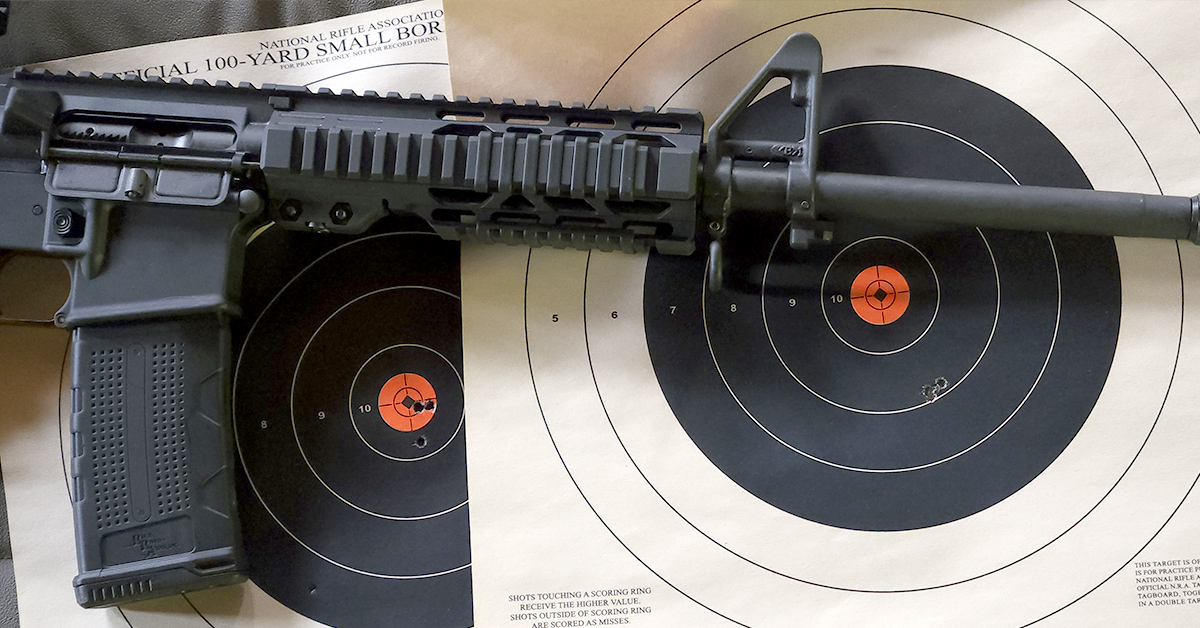 The target on the left represents a 25-meter zero three-shot group taken from a bench using sandbags for support. The next three shots (target right) were taken from a sandbag-supported prone rest at the same 25-meters. Note the shift in point-of-impact. That, dear readers, is a significant shift from such a short range (1.75 inches, to be exact).

The 25-meter zero is intended to ensure neutralizing hits on target with open sights from zero out to 300 meters with no sight adjustment required (that’s why it is called a battle zero). A nearly two-inch shift in point-of-impact at 25 meters will translate to even greater shift at 100 meters. You probably will have as much chance of “winging” a silhouette target at that distance as you would of missing it altogether. By the time you stretch that shot out to 200 or 300 meters, it’s all air balls.

This is why it is so important to zero and practice from the shooting positions and conditions that you anticipate encountering in the field. This goes for hunting firearms as well as defensive firearms. The firearm doesn’t change because you are in a different position, but the way you hold, sight, and engage the firearm in different field positions can produce massively different points of impact than what you may get from a controlled bench rest.

This is just one of the reasons why people miss in the field and then can’t understand why. 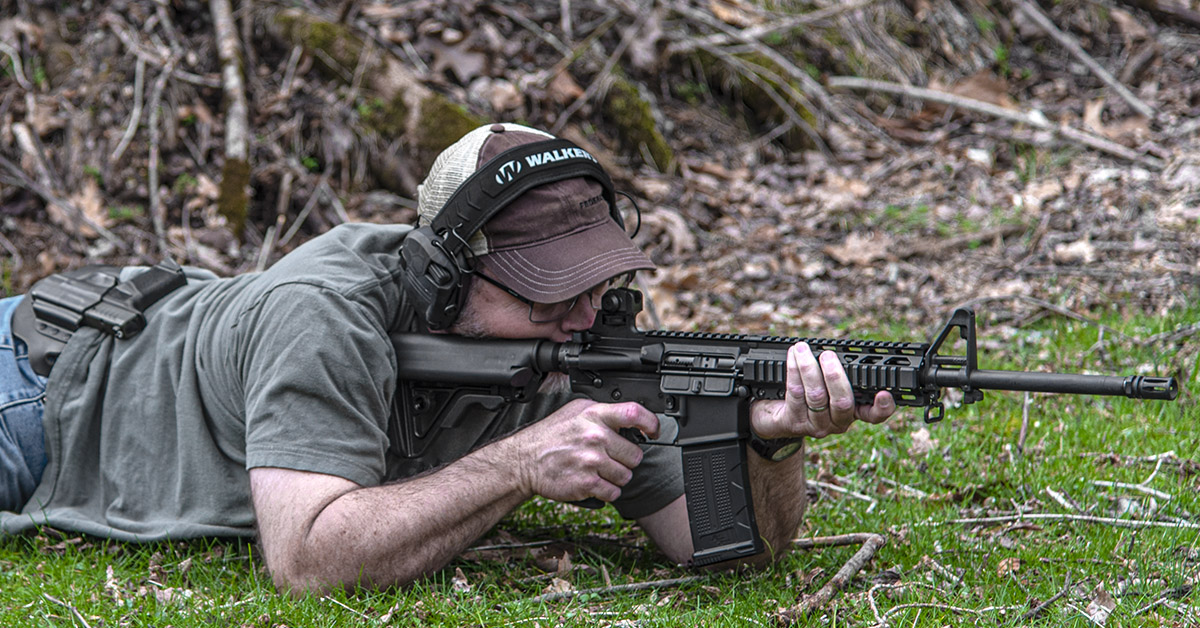 Overall, we like the Rock River Arms Assurance-UTE. It is light, maneuverable, exceptionally comfortable, and most important of all, reliable and accurate. This firearm is intended for those looking for a no-nonsense defender and who will wisely put in the time to hone their marksmanship skills. Sure, the quad-rail free-float handguard does allow for some knick-knacking, but its carbine length is going to curb most temptations to accessorize.