There are few better choices for home defense than a medium-frame double-action revolver. Whether chambered in .38 Special or .357 Magnum, these handguns are reliable, handle instinctively, and offer good hit probability at close range.

There are other advantages related to the nature of close-range assaults. If the assailant attempts to wrest the gun from you, he won’t have much leverage if your revolver is a two- or three-inch barrel type. On the other hand, a medium-sized grip frame gives you plenty of leverage to maintain control. Keep a firm hand on the handle and you have good leverage in a fight for your life. If need be, the revolver may be pressed into an adversary’s body and fired time and again with no chance of the revolver jamming. For what personal defense is really about, a revolver is well worth considering. 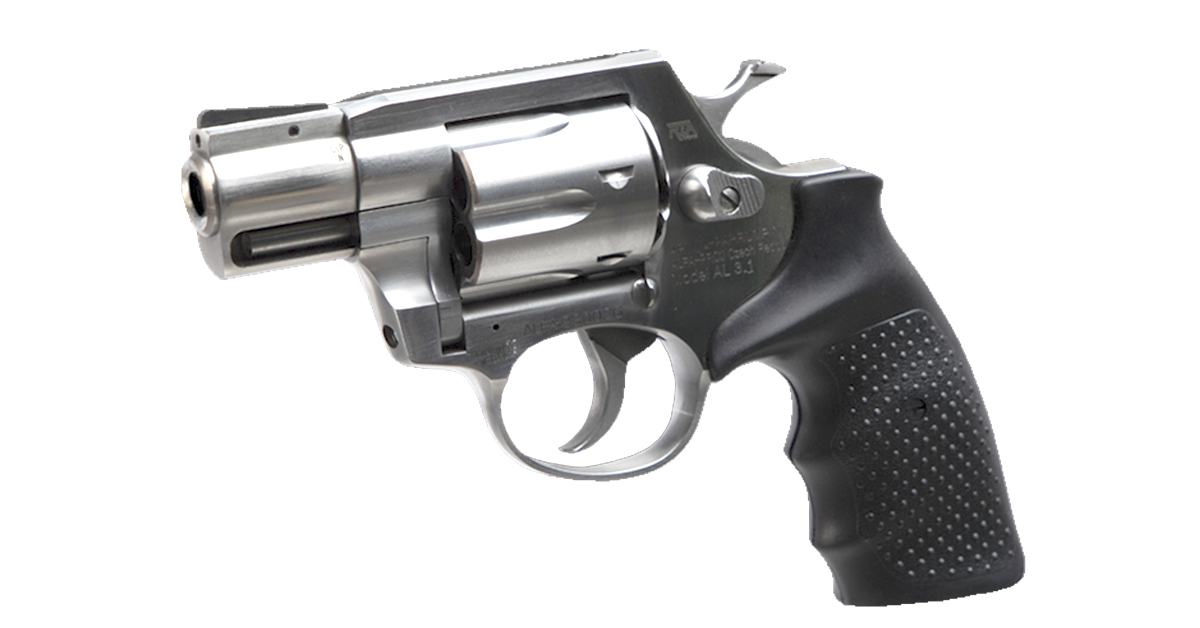 Recently, I was able to obtain and test fire the Rock Island Armory AL3.1, not to be confused with the economy grade Armscor 206 .38 Special. The Rock Island AL3.1 is manufactured in the Czech Republic. This is a heavy-duty revolver about the size of a Smith & Wesson K-frame six-shot revolver, larger than a Ruger SP101, and smaller than the Ruger GP100. 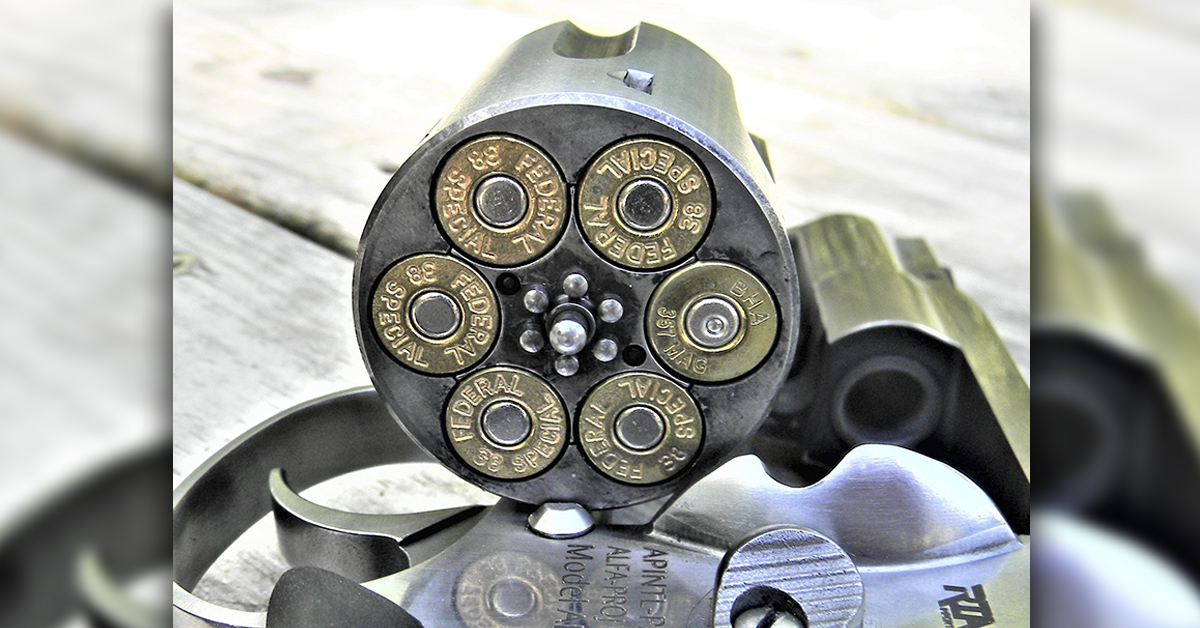 The cylinder features six chambers that are countersunk — a nice touch in case you get a one-in-a-million case head rupture. The crane is a simpler design than most revolvers and I am certain it doesn’t require as much fitting. The crane is solid and occupies both sides of the frame when the cylinder is closed. The rod ejector is well designed with a rounded tip that shouldn’t abrade the palm when you smack out spent cartridge cases. The star ejector has studs that connect to the hand as the cylinder rotates — an interesting departure from everyone else’s revolver.

Internally, the revolver is standard fare. The parts appear to be forged, not cast. The action is more like a Smith & Wesson than any other revolver. There is a departure, though, in that the hand is held forward during its travel by a spring plunger in the side plate. It would have been less expensive to copy a Smith & Wesson or Taurus, but this addition may serve some purpose. 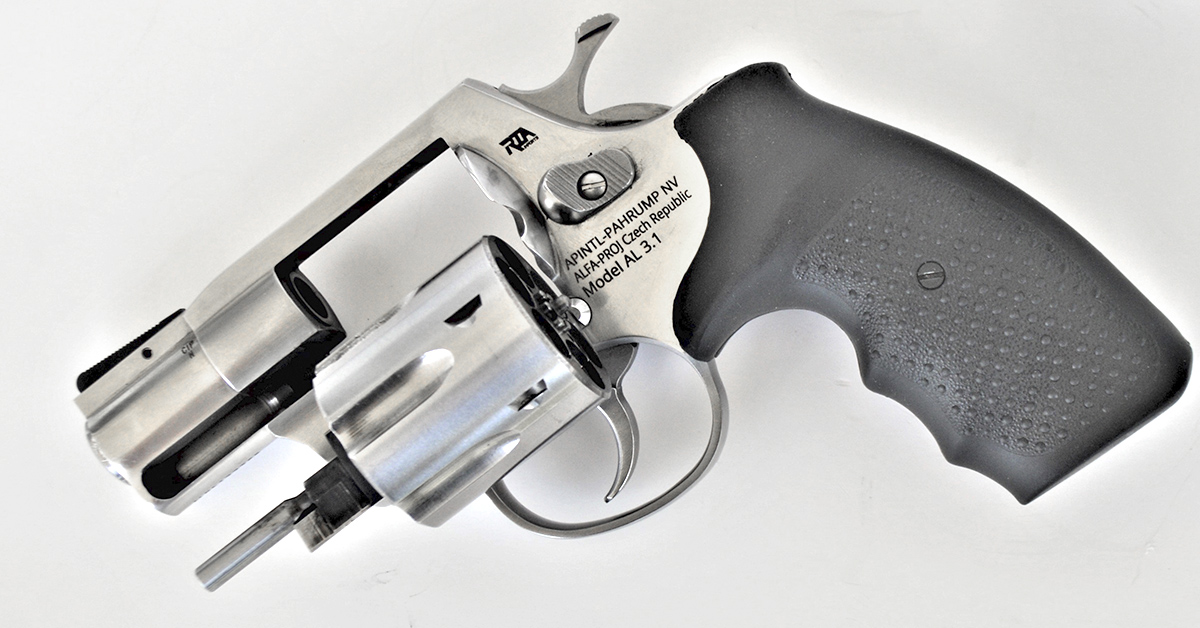 Manufacture and fit of the pawl is probably easier with this system and it works well in practice. The action is powered by a coil spring. The double-action trigger is heavy at just about 11 plus pounds, as expected from an economy revolver. It can be learned well enough to provide X-ring hits on the firing line to seven yards, perhaps even 10 yards. The single-action press is just under four pounds and clean. While we should use double-action fire in combat shooting, firing for accuracy at longer range or decapitating a reptile at short range demands precise shooting. The single-action option is good to have.

The AL3.1 features a well-designed rubber grip. The grip is secured by two screws, one on each side. While similar to American revolvers, this is another indication that this European revolver is just a little different. Polish of the stainless-steel surfaces is excellent. The trigger face is serrated, as is the hammer spur. 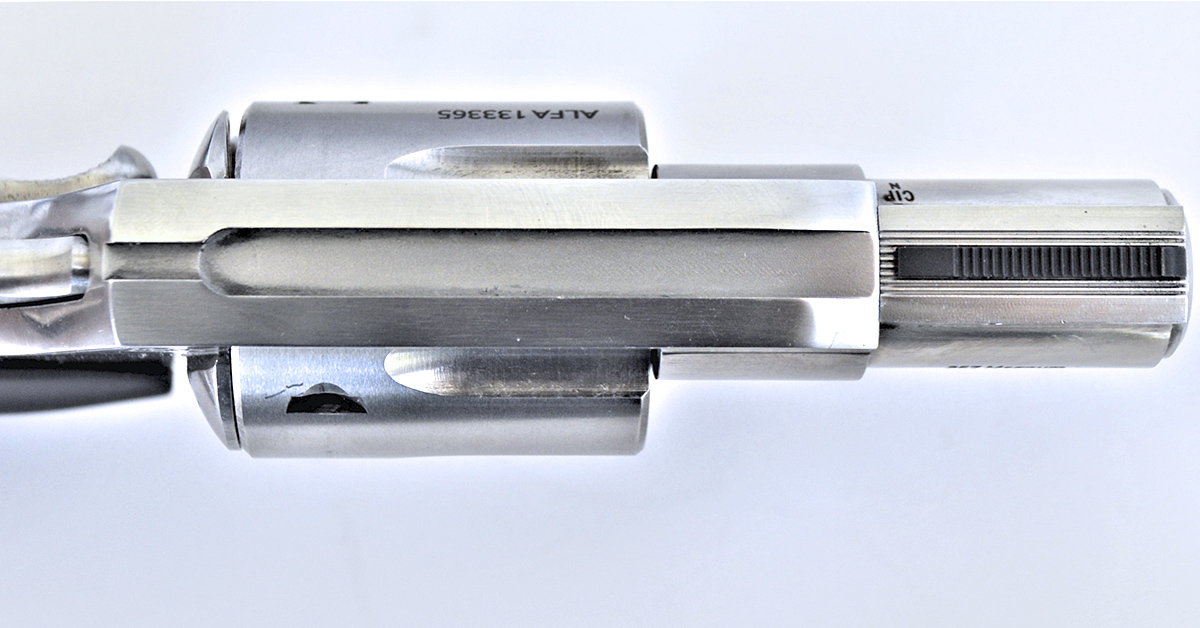 The front sight is pinned in place. The ramp front sight and top of the receiver groove are standard in snub nose revolvers. The sights are not of the high visibility variety but they are well adjusted for 125-grain loads. It takes practice to become proficient with these sights. For close range shooting at man-sized targets, it may be best to use the front sight in a slightly elevated position. Fast, accurate shooting may be done by quickly aligning the front sight with the belt buckle. The bullets will strike several inches high using this ‘meat and paper’ drill.

Among the advantages of the revolver is simplicity. Push the cylinder latch forward to swing out the cylinder. It is that easy to load the piece or check and see if the revolver is loaded. Load cartridges into the chambers one round at a time. Close the cylinder and you are ready to fire. Simply press the trigger straight to the rear as you focus on the front sight and you will get a hit. As the revolver recoils, allow the trigger to move fully forward and reset. As the sights come back on target, fire again.

I have fired the revolver a good bit and feel qualified to make some observations. 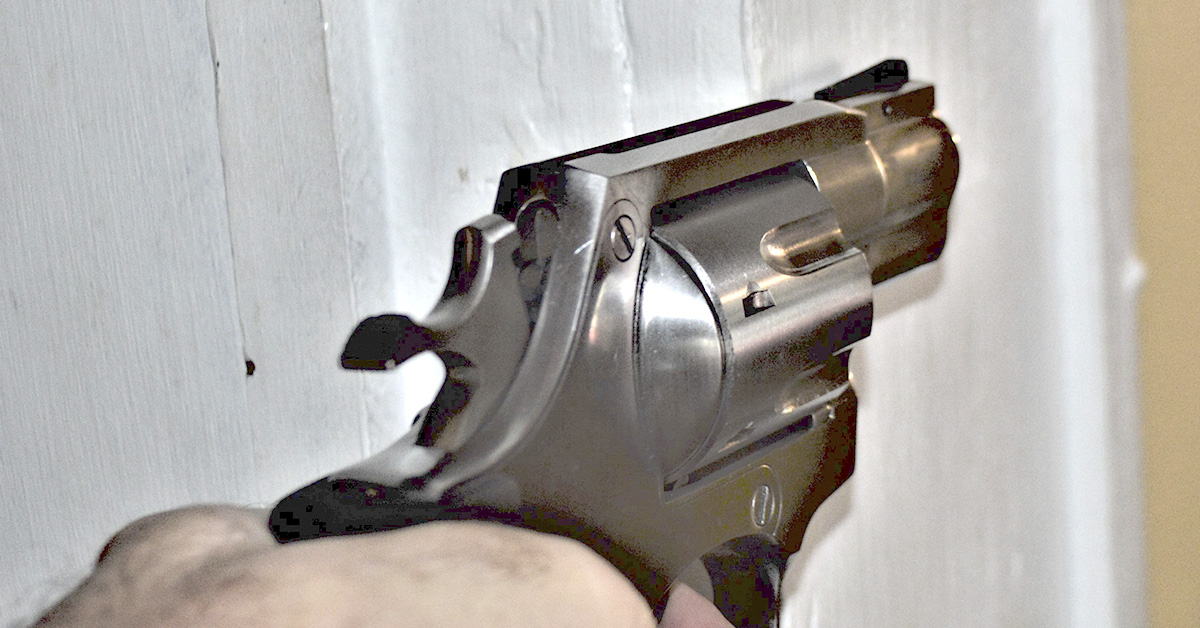 The trigger action is reliable and smooth, if heavy — typical of revolvers with coil spring actions. Practical accuracy at home defense range is good. Intrinsic accuracy is excellent if you can manage the trigger well enough to take advantage of this accuracy.

A criticism of the mid-frame short-barrel magnum is that the revolvers kick.  At well over two pounds, the AL3.1 kicks hardly at all. It is pleasant to fire. This is due to the weight of the all-steel AL3.1 and also the well-designed rubber grips.

I used a good supply of Remington .38 Special for this evaluation, including 130-grain FMJ and 158-grain RNL loads. Control is excellent. Each load is accurate and clean burning. Moving to magnum loads, I fired the Remington 125-grain JSP and also the 125-grain JHP. Each fired normally with a lot of flash and “gee whiz” yet the revolver remained controllable. 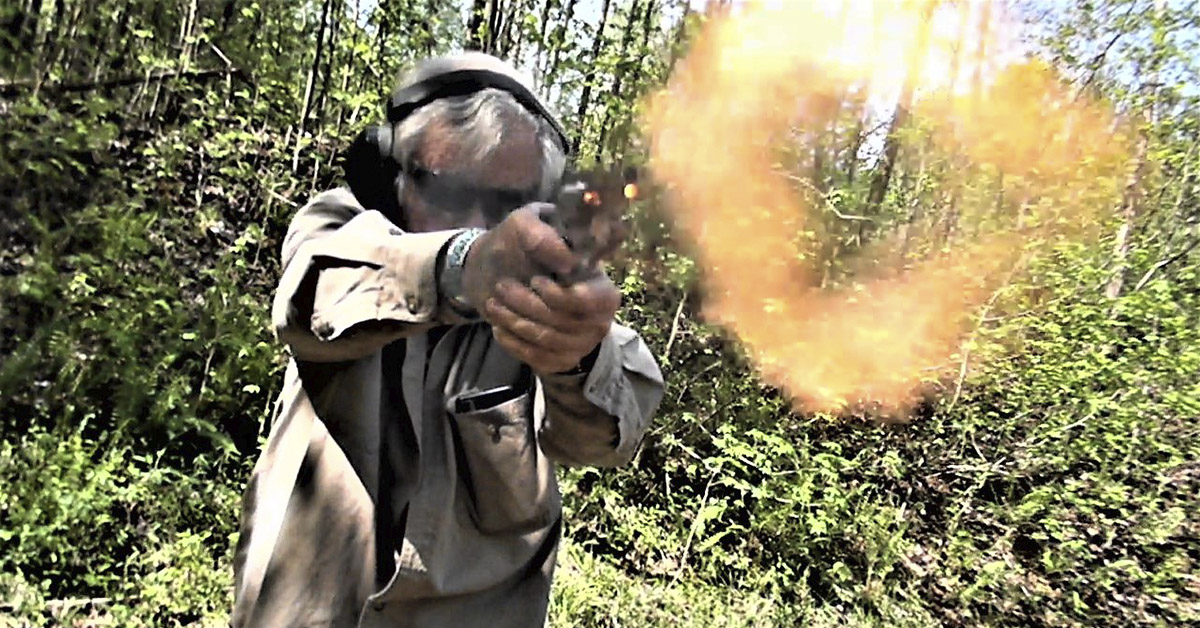 In combat shooting, getting on target quickly is most important. Since we measure a handgun’s worth by firing for groups at a set distance, I also fired several five-shot groups at 15 yards. In general, the .38 Special loads stayed at just below two inches in accuracy while the .357 Magnum loads averaged just over two inches — two to two and a quarter inch for five shots.

Ammunition performance must also be evaluated. Generic practice loads average 650 to 770 fps. This is fine for practice. The .38 Special 125-grain JHP loads average 860 fps. The 125-grain .357 Magnum loads average 1120 fps versus 1400 fps in a four-inch barrel revolver. You certainly give up some velocity in this handgun. Just the same, that is a lot of power in such a short-barrel revolver. The user pays his money and makes his choice. There are dangerous two- and four-legged creatures that would be handled well by this reliable handgun.

The revolver gives the notion of a rough and tumble handgun ready for serious use. It is reliable and handles heavy loads well. This is among the lightest-kicking magnum revolvers I have tested. It is designed for close range and makes a fine home defense firearm.

The trigger is heavier than I like. This is, in part, the price of a coil spring action. Nothing we can do about this. The parts are sturdy enough that we could polish the internals without damage to fitting — if you are not ham-handed or have ten thumbs.

The Rock Island AL3.1 compares favorably to short-barrel magnums from anyone. It doesn’t have the notorious Smith & Wesson action lock many despise, and it is about the same size as a Ruger GP100. The action of most any competitor is smoother. 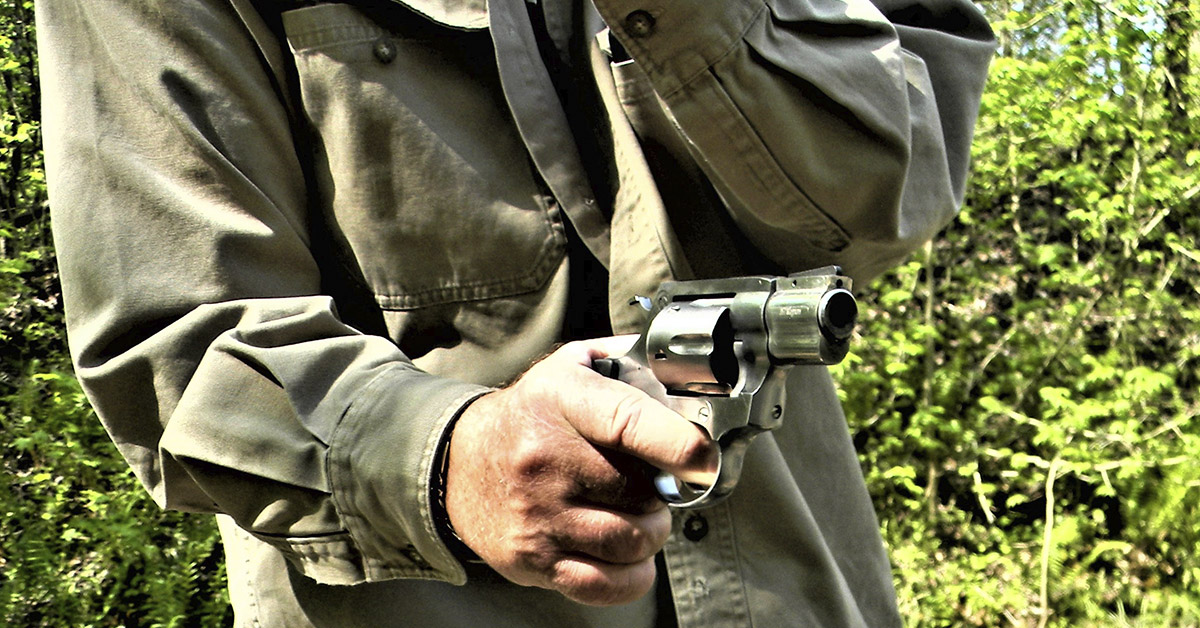