You may recall that about 18 months ago, Taurus unveiled a totally fresh rimfire pistol platform called the TX22. Billed as a handgun “factory tuned” for competition, the TX22 lived up to the fanfare. This full-size polymer semi-auto touted a new-for-Taurus frame engineered to cover a broad swath of hand sizes and to deliver the kind of ergonomics and trigger performance we typically see on guns with notably higher sticker prices.

The TX22, with its surprising $316.76 MSRP, proved to be a hit right out of the gate—even earning the 2019 Guns & Ammo Handgun of the Year award. This year, Taurus ups the ante with the introduction of the TX22 Competition. 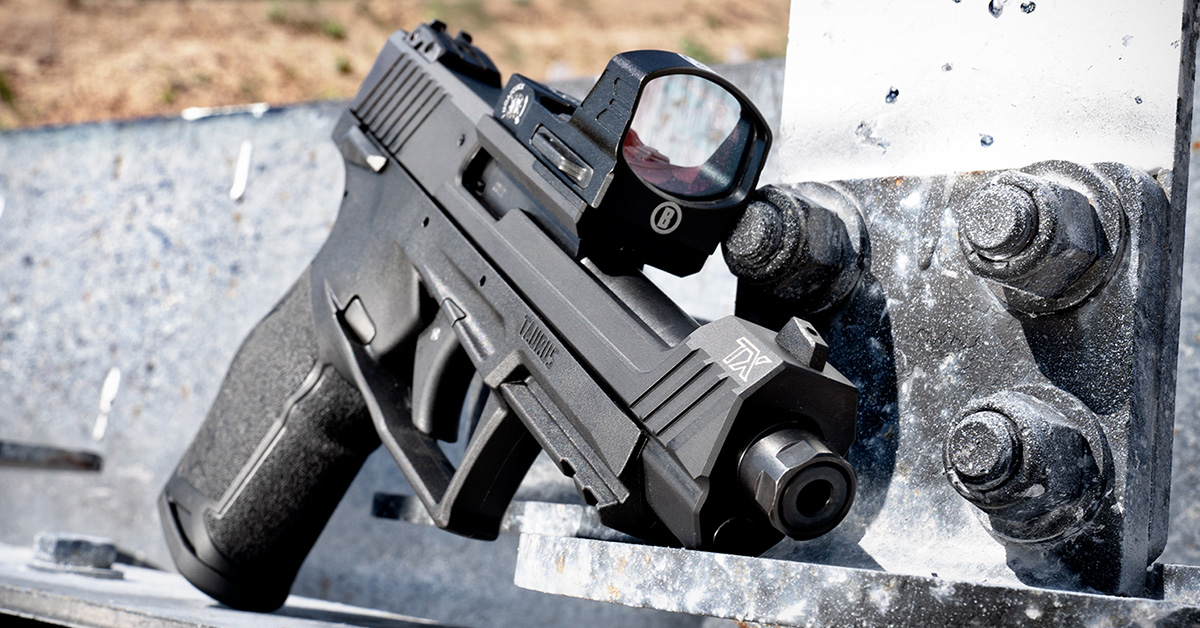 Optics have become increasingly popular add-ons for handgun shooters. Witness the growing number of pistols and aftermarket slides featuring optic cuts ready to accept one of the several common optic mount patterns. For shooters who desire lightning-fast sight pictures for personal defense or target shooting, lightweight, low-profile reflex red dots make a lot of sense. For shooters with waning near-vision, a quality red dot atop their pistol is often essential.

With the TX22 designed specifically to serve multiple needs—a cost-efficient training gun for new shooters, a high-volume practice gun that spits out economical .22LR rounds, and a competition-level pistol that won’t break the bank—developing a TX22 variant that is factory-ready to accept a red dot optic is the natural evolution of this platform.

To get there, Taurus engineers didn’t simply carve a chunk out of the TX22 slide and call it “optic ready.” The entire slide assembly, which includes the barrel, was purpose-engineered for the task.

The TX22 Competition begins with a robust competition-grade bull barrel. Five inches in length, the barrel is made from alloy steel and threaded to accept a suppressor or muzzle device. A thread protector is included for those who prefer to run a clean muzzle.

At the breech end of the barrel is where things get interesting. 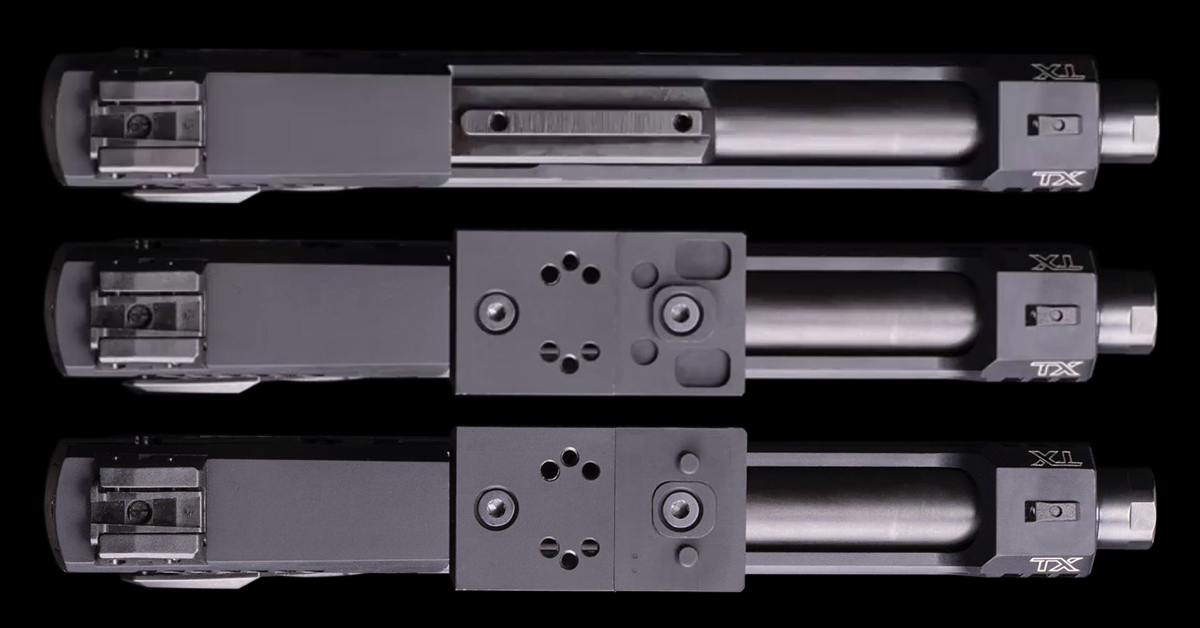 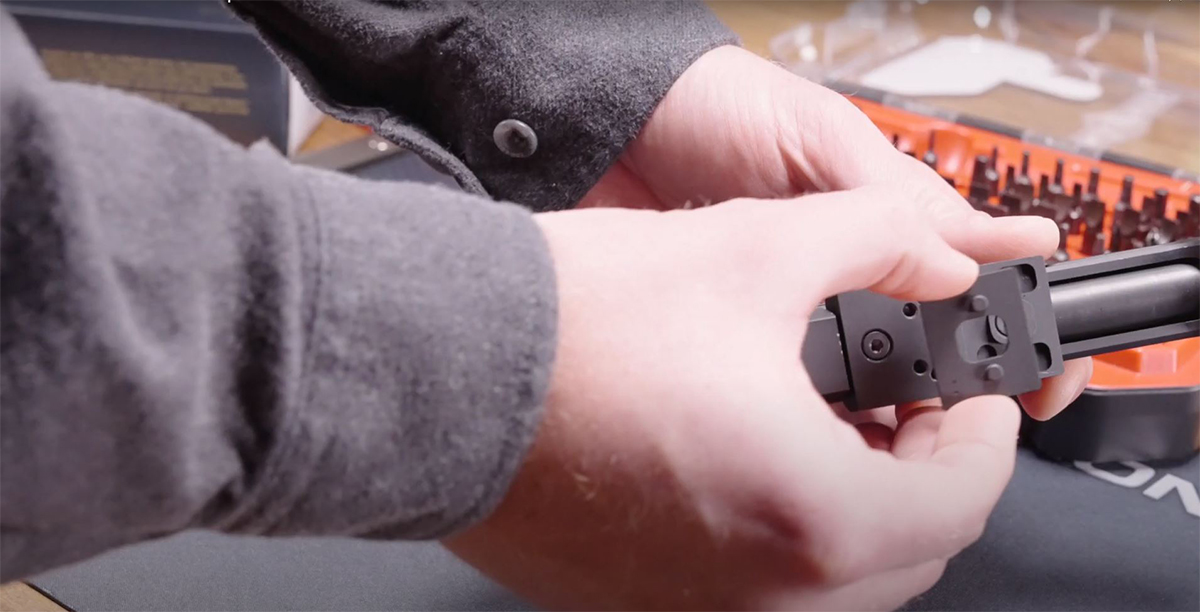 Installing an optic is as simple as selecting the mounting plate configuration for your optic and installing it onto the mount platform. The TX22 Competition is compatible with the following optics: 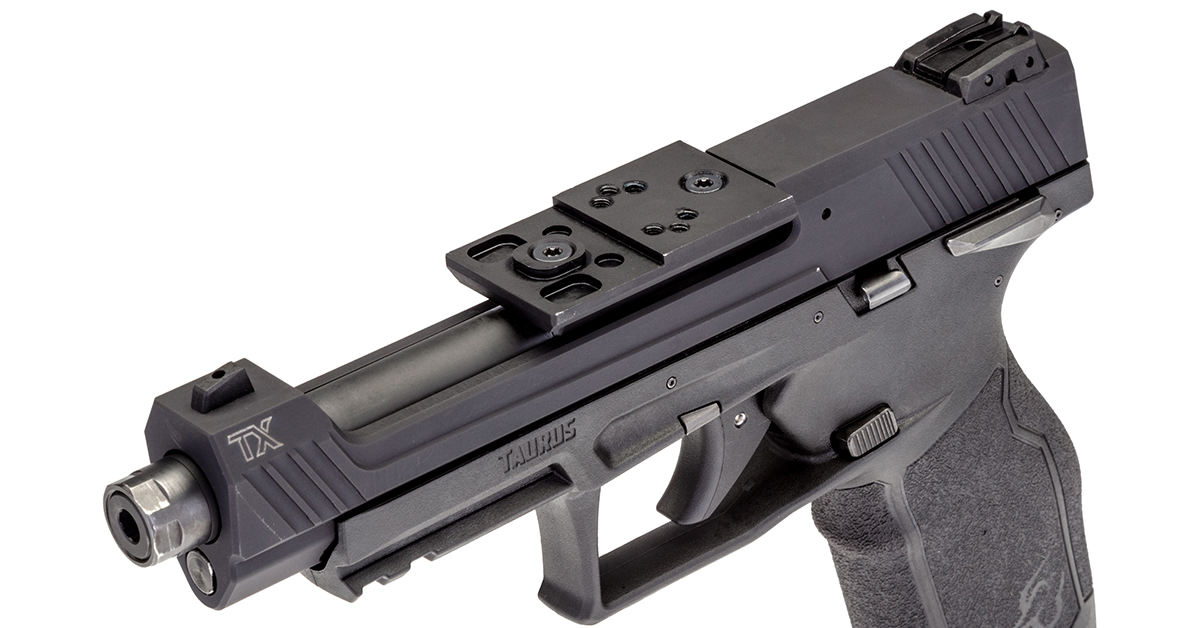 To accommodate the optic mount system, Taurus engineers took a skeletonized approach to the slide design, removing material from the ejection port forward to the front sight.

With this cut, the slide can move freely throughout the cycle of operation while the barrel and optic remain in their fixed position. Combined with the heft of the bull barrel, this makes an extremely stable platform that minimizes movement under recoil and allows the shooter to remain on target and execute fast follow-up shots. To see just how stable the TX22 Competition is in operation, check out the video above showing Taurus shooting team Captain and world champion shooter Jessie Harrison run the pistol through its paces. 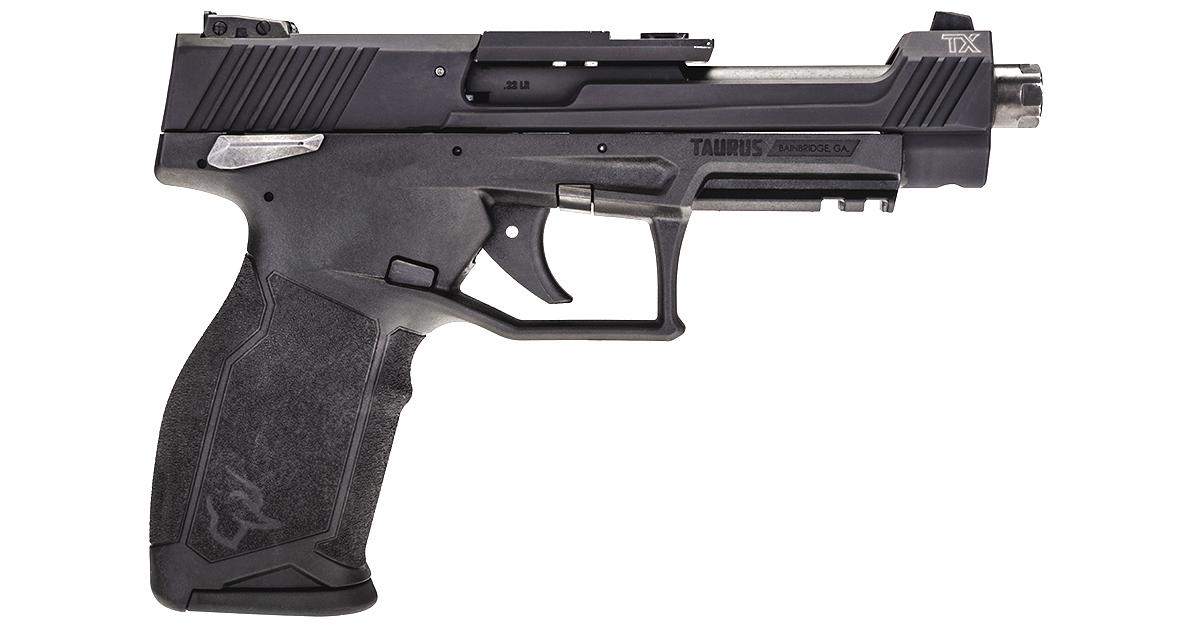 South of the slide assembly, the TX22 Competition holds to its original TX22 roots with the same ergonomic frame. The pronounced palm swell and deep web contour places the shooter’s hand high and tight for optimal control and finger-point-natural alignment. As with all the Taurus TX22 and G3-series polymer pistols, the aggressive stippling patches ensure a solid, positive grip. 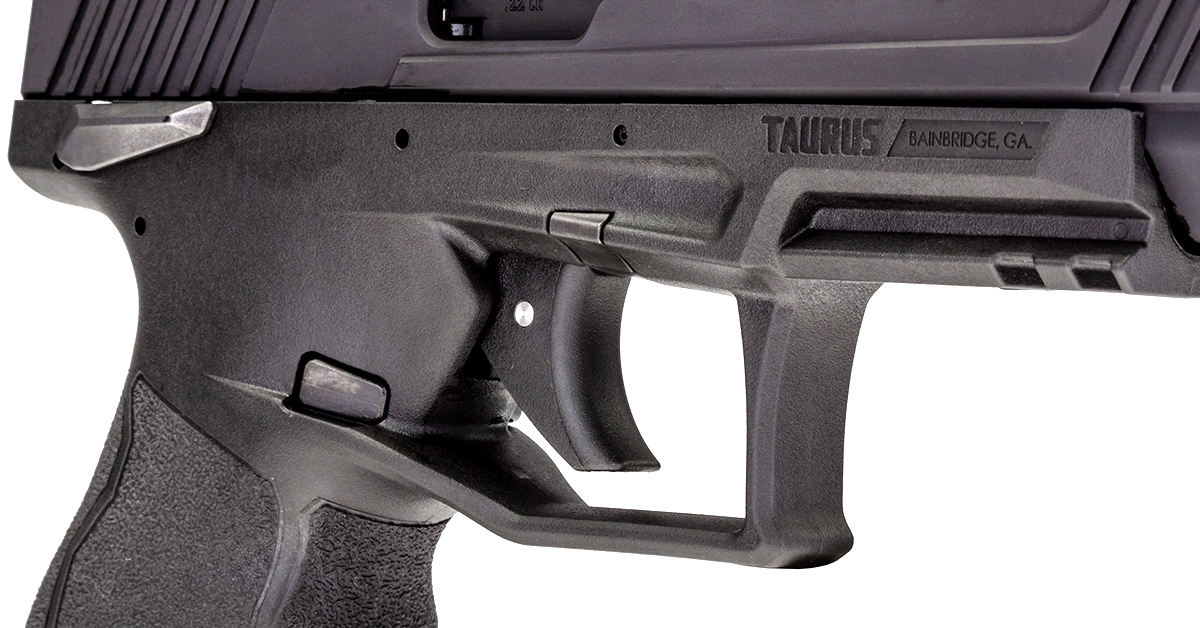 Another highlight of the TX22 Competition is the Taurus Performance Trigger System. It pulls smooth, breaks clean, and features smooth contouring and ample width to promote optimal finger placement and a straight pull.

An ambidextrous safety system and indexing/recoil management pads comply with left- or right-hand shooters. Should you desire a light or laser, the frame includes an integrated rail mount.

Finally, the TX22 Competition ships with three 16-round magazines, which we find not only surprising, but much appreciated because this is a pistol that absolutely begs for mag dumps!

Stay tuned to Shoot On for a full-on field test of the new Taurus TX22 Competition. In the interim, we’ll leave you with the thoughts of someone who has run this new rimfire at the top of the competition circuit…Jessie Harrison. 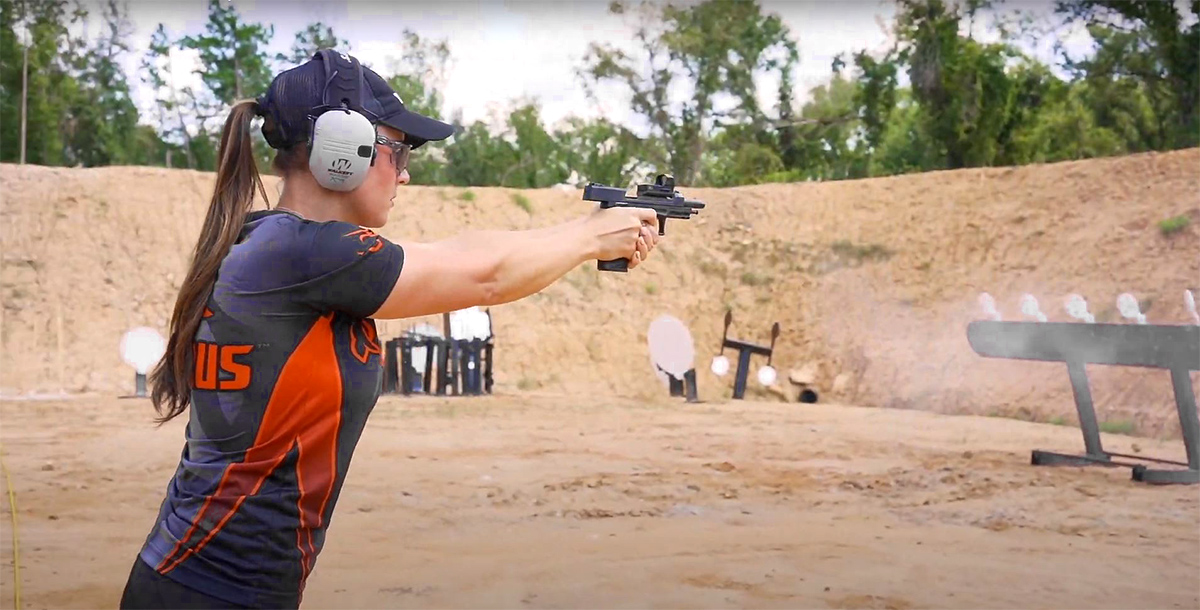 “The engineers at Taurus definitely thought outside of the box on this firearm, from the beginning of the TaurusTX™ 22 to this competition model,” said the Taurus shooting Team Captain. “They put a lot of focus and research into the ergonomics of the grip and designed something that feels natural in the hand. The trigger system is unlike any other Taurus firearm—a single action only striker fired trigger that feels smooth and breaks crisp. That’s important from a competitor’s standpoint for speed and rapid fire. The threaded barrel that would typically be used for a suppressor doubles for a compensator if you choose. All that’s needed is to add your optic of choice and you’re off to the races!” 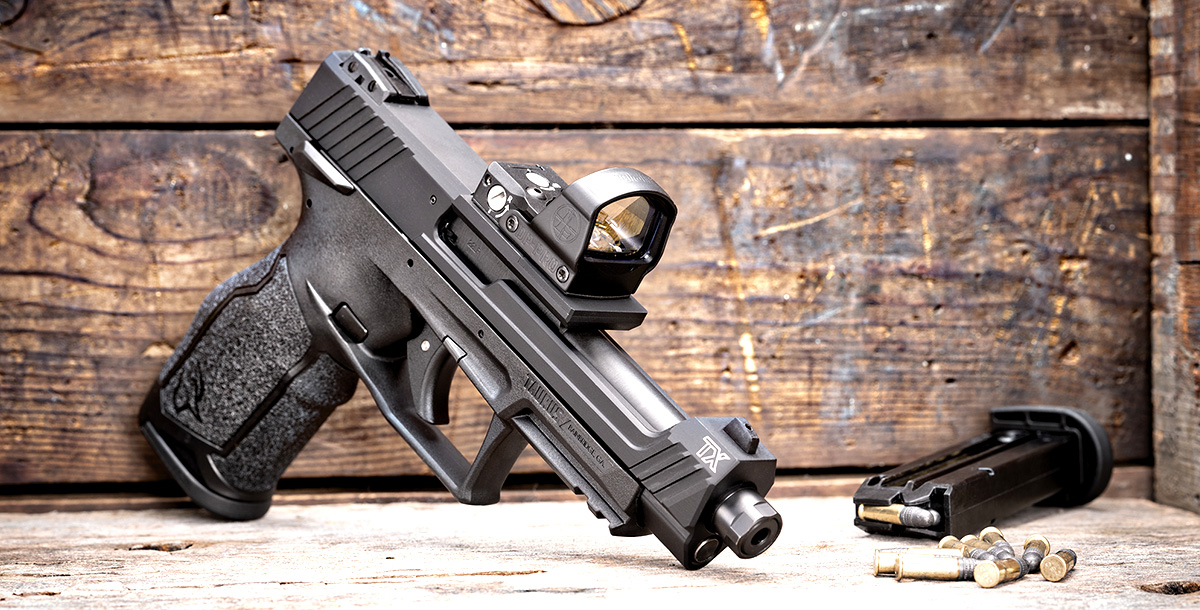 MINI-TECH: Build Your Own Goat Guns!