It has been close to fifteen years since I first saw someone using a tactical shotgun to hunt coyotes. It was on an educational predator hunting DVD and the featured hunter used a tactical-style shotgun in conjunction with his rifle to successfully harvest the varmints. The excitement was enough for me. One day, I promised, I would amp up my predator hunting game with a rough-and-tumble tactical shotgun platform.

For years I have carried my rifle, shooting sticks, an electronic caller, and, on occasion, my turkey shotgun in pursuit of coyotes. Even though I often felt more like a pack mule than a hunter, adding the shotgun gave me the occasional advantage. A shotgun is easier to engage a fast-moving target, damages less fur at close range, and presents the opportunity to take multiple coyotes when more than one coyote responds to the call. If hunting with a rifle and a shotgun, you can take the closest coyote first with the shotgun and then engage the next coyote at a more extended range with a rifle.

After seeing a tactical shotgun being used for predator hunting, I realized that I could easily hold a compact shotgun in my lap. A shorter shotgun adds to the concealment factor and makes it much easier to carry when walking from stand to stand.

Another bonus of the tactical shotgun is that it’s not just for hunting. During the off-season, it’s the perfect supplement or primary weapon for your home defense needs.

To set up a tactical style shotgun for predator hunting, only a few adjustments need to be made.

First, you need to pick a shotgun that allows you to easily move it from your lap or the ground to a shooting position. I prefer using a pistol grip because, for me, it lets me get the gun quickly into a shooting position—precisely what tactical shotguns are made to do when used for self-defense or competition.

Next, I want a shotgun that will chamber through three shots in a hurry. I can engage fast-approaching animals and then switch to my rifle and shoot multiple coyotes before they get out of range.

A gun that I have recently been using for predator hunting is the Mossberg 500 ATI Tactical Shotgun chambered for 3-inch 12-gauge.

A 12-gauge will provide the knockdown power needed to take down a coyote that can weigh 35 to 40 pounds. A 3-inch chamber lets you use popular coyote loads, however, with only an improved cylinder bore, you will have to make sure to match up your choice of a load with the cylinder bore instead of a full choke—which is more common with the heavier loads used for hunting.

At only 6.75 lbs. and measuring 36.37 inches long, the 500 ATI Tactical is perfect for carrying when walking and small enough to strap to a backpack for those long hikes.

Set Up for Hunting

A tactical-style shotgun is commonly used as a home defense weapon or for competition shooting. If set up correctly, though, it makes for an excellent weapon for predator hunting.

The first change that needs to be made to modify it for hunting applications is an optic. When I coyote hunt with a shotgun, I want to get on a fast-approaching target quickly. I prefer using a reflex dot sight such as TRUGLO’s Tru-Tec Micro. 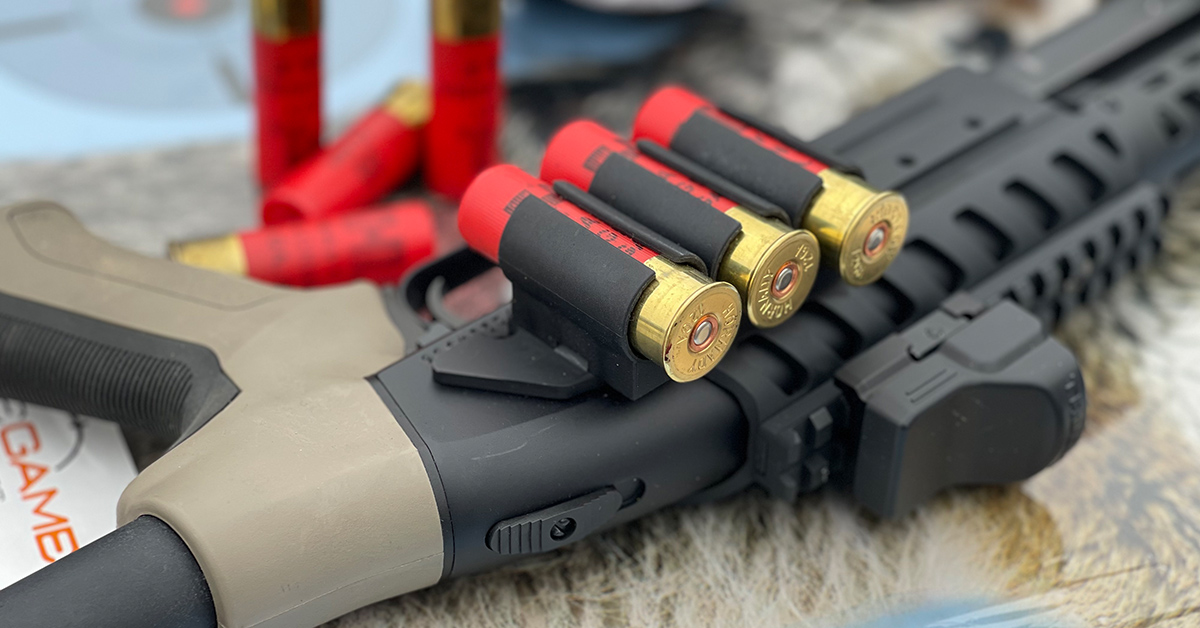 The open field of view of a reflex sight lets you get on target fast. The 3-MOA red dot reticle on the Tru-Tec Micro provides an illuminated dot that’s adjustable for any light condition.

Zeroing the optic is next. With the Mossberg 500 ATI Tactical only having a cylinder bore (as with many defensive shotguns), you don’t have to worry about chokes. For coyotes, I prefer a heavier load, such as a Hornady’s Heavy Magnum Coyote in 00 buck. These loads contain 1.5 ounces of nickel-plated shot that delivers a tight, dense pattern with minimal pelt damage out to 50 yards. Unlike most coyote loads, the Heavy Magnum Coyote ammo is recommended to be used with an improved cylinder or modified choke instead of a full choke. The ATI Tactical shotgun coming with a cylinder bore makes the two pair perfectly for coyotes.

With the load selected, I start by patterning the gun at 20 yards. For this, I like to use Birchwood Casey’s Pregame Coyote Target. These realistic, life-sized targets splatter on impact, allowing you to see your shot pattern immediately while giving you a real hunting scenario. 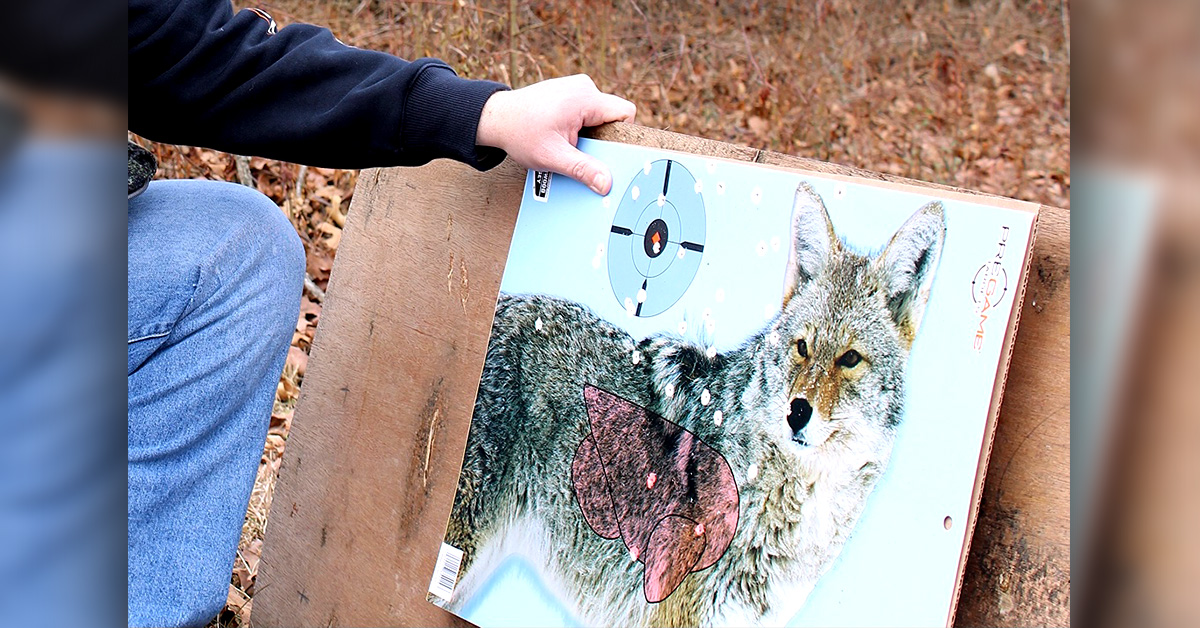 I deliver one shot on the coyote target and then adjust windage and elevation until the center of the shot pattern hits my point-of-aim. It usually takes only two or three shots to get centered. From there, I’ll shoot at 30, 40, and 50 yards to ensure that the zero holds out to my maximum shooting range.

Calling in predators within shotgun range can be a challenging effort but one that is exceptionally rewarding. With the maximum range of 50 yards or closer, you must be patient and learn to get coyotes within striking distance.

Although some get a thrill of only using a shotgun when predator hunting, I prefer using my shotgun as part of a two-gun strategy.

When hunting coyotes, I typically use rifles in calibers such as a .22-250, .223, .243, and even a more significant caliber such as the 6.5 Creedmoor. To paint a picture of my setup, my rifle is usually positioned in the center or slightly to my left while sitting on the ground. The rifle is attached to my Swagger Bipods to give me a steady rest if shooting at a farther distance, plus it keeps the rifle in position if I need to use the shotgun for a closer range shot. 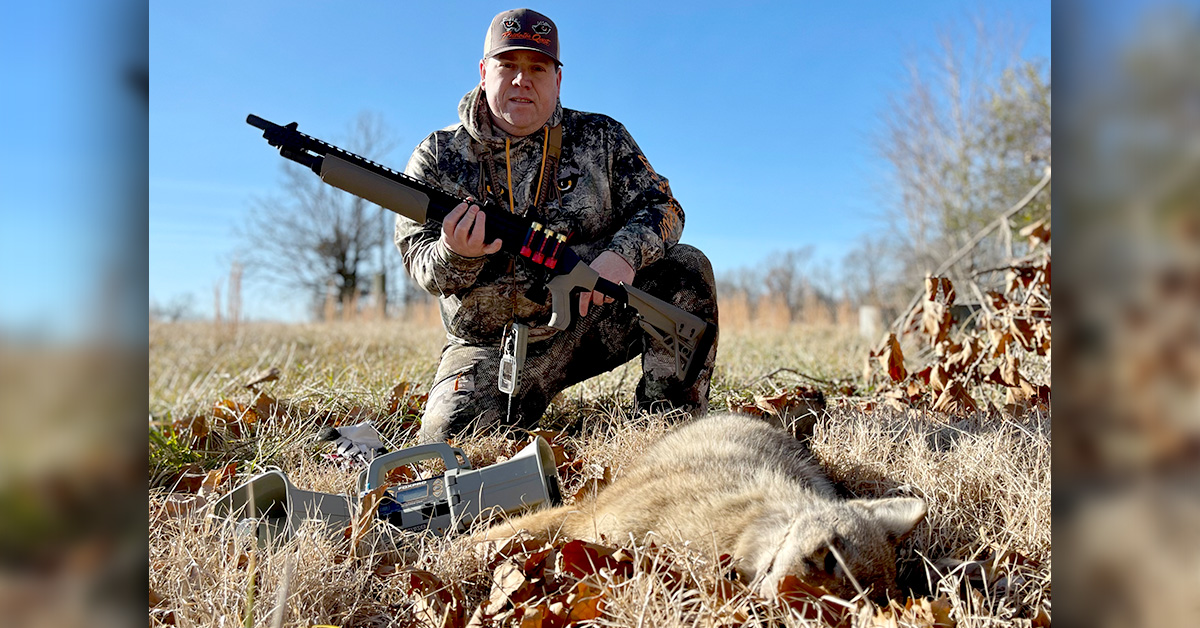 My shotgun is positioned on the right side of my leg or sometimes across my lap. This is the reason I love using a tactical style shotgun for coyotes. The smaller size allows me to keep the shotgun at a more comfortable reach without getting in the way of my rifle.

With this two-gun setup, I can stay close to my rifle to make any shot from 50 to a few hundred yards if needed. If the coyote comes in closer, I reach for the shotgun. As mentioned earlier, I damage less fur with a shotgun than with a high-powered rifle. Plus, if more than one coyote approaches the same stand, I can shoot first with my shotgun and then follow up on the next shot with a rifle.

Even though the idea of using a tactical-style shotgun has been around for quite a while, the excitement and adrenaline felt when harvesting a coyote while using one feels new every time. I highly suggest using a tactical shotgun if you want to raise your coyote count while mixing in some heart-pounding adventure.

And if you missed Thanksgiving, spring gobbler season is not that far away! by Heath Wood …