What kind of performance should the new gun owner or the occasional shooter expect in terms of accuracy from their compact or micro-compact EDC pistol? Let’s find out…

Experienced shooters understand that firearm proficiency is, at its core, a two-step process. Step one is familiarization with the firearm and learning the fundamentals of proper gun handling skills and basic marksmanship. Step two is refining those marksmanship skills and smoothing out essential operational tasks. The goal, of course, is to become proficient in delivering hits on target for the scenarios you intend to deploy the firearm.

That is the overly simplified version. For defensive firearm applications, the training is broad and deep and never ends. Shooting is a perishable skill that must be continually honed. Thus, we can never overemphasize the importance of training — especially training done under the guise of a qualified instructor.

With that, the reality is few new shooters or new gun owners immediately sign up for introductory firearm classes. Most will go to the range with their just-bought handgun and shoot a box or two of whatever ammo they could get their hands on, only to lament their poor performance.

“I’m all over the place,” is a common refrain of the beginner.

Well, that is certainly to be expected if the shooter has not mastered the fundamentals. But even those who, through the years, have learned their way around a gun may be disappointed at their group sizes — particularly if they have been comfortable shooting full-size handguns and are transitioning to one of the many compact, sub-compact, and micro-compact pistols that are so popular today for concealed or everyday carry.

Variables such as firearm quality (material construction, manufacturing precision, mechanical design, ergonomics), ammunition quality, barrel and sight radius length, and firearm-to-ammunition compatibility all factor into point-of-aim, point-of-impact performance. Then there are the human factors, such as marksmanship skills and firearm-to-shooter compatibility (the gun must fit the shooter).

It all must work in unison. Even then, the question arises:

“What are the reasonable expectations for accuracy in conventional small-frame handguns?”

With the variables affecting accuracy being nearly infinite when you consider everything that can influence the point of impact, only general conclusions can be reached when trying to define the answer. 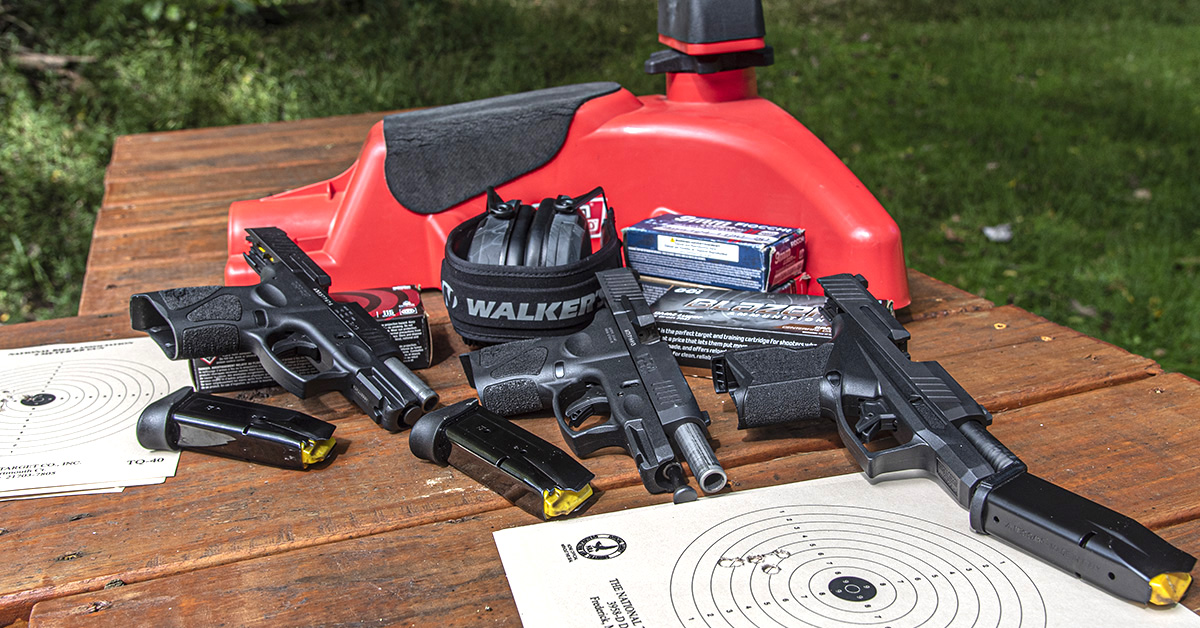 To illustrate reasonable accuracy expectations for a compact or micro-compact handgun and how subtle changes in barrel length/sight radius and different ammunition loads may impact accuracy, we present a quasi-controlled test of three different pistols with close “common denominator tolerances.” For this test, we selected three models from the Taurus G-series lineup: the Taurus GX4, G3C, and the G3XL. Loosely defined, these three guns represent the micro-compact, sub-compact, and compact categories, respectively.

The test parameters would involve shooting each gun from a bench support with four different 9mm loads. Five rounds of each load would be shot through each gun at 10 yards (30 feet). This is a fair distance that is well beyond the typical personal defense encounter yet far enough to establish accuracy. The test would also be limited to a single shooter to eliminate any variables in shooting skill and technique and to establish benchmark accuracy. Also, no “do-overs” — one shot string per test and done.

The next test would take the most accurate load shot from each handgun with the shooting done from a standing, unsupported position at the same distance. This would simulate real-world shooting conditions.

The anticipated results of these tests should show the novice/intermediate-level small handgun owner what can be expected in terms of accuracy (represented by group size) given a well-made firearm and quality factory ammunition. With this, the shooter should gain a general understanding of how a micro-compact, sub-compact, or compact pistol should perform within the typical self-defense distances. From there, refinements can be made to further enhance accuracy, such as marksmanship training, regular practice (live- and dry-fire), and load experimentation (ammo manufacturer, bullet weight, bullet type).

For our test, we selected Fiocchi, Barnaul, Blazer, and Federal ammunition. Three of these incorporated 115-grain bullets (Blazer, Federal, and Barnaul) with the outlier being Fiocchi in 124-grain. All were round-nose full metal jacket except for the Federal Syntech, which is a flat-nosed lead bullet with a synthetic jacket. All test guns were “fresh” with no prior sight adjustments. The results were as follows:

We expected to see variations in the group sizes of the three pistols to be based largely on the different loads, with the longer-barreled guns (and their longer sight radii) providing incrementally tighter groups. This expectation generally held, with the micro-compact GX4 delivering an average group size of 1.745 inches — the largest of the three test sets by just over a quarter of an inch. Not bad, considering the GX4’s short barrel/sight radius and smaller grip relative to the G3C and G3XL. 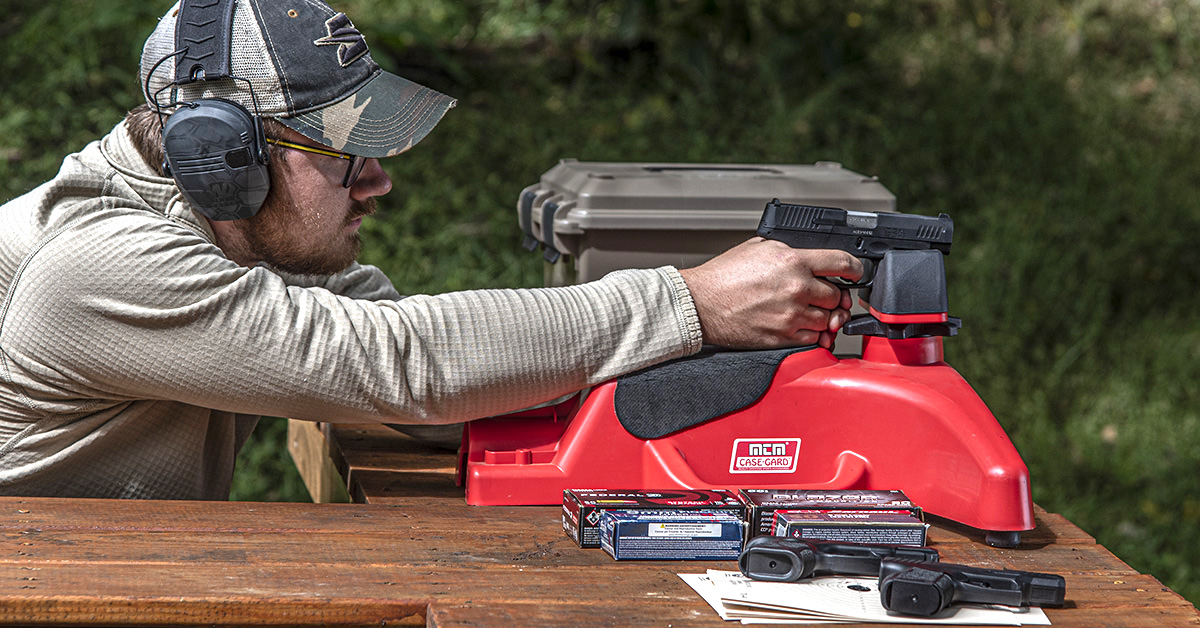 What did surprise us was the G3C posting the smallest group size at 1.388 inches, or 0.131 inches smaller than the longer-barreled G3XL. Granted, that is only about 1/8th inch difference, but we anticipated a greater disparity given the nearly 3/4-inch longer barrel in the G3XL.

The more telling result of this test was the difference in group sizes between the 115-grain bullets and that of the 124-grain. We know Fiocchi to be a high-quality ammo brand from previous testing, so there was no questioning the consistency of the load. What it did tell us — which is the important takeaway for the novice shooter — is that even a slight change in bullet weight (in this case, a mere 9 grains) can have a notable impact on accuracy. That is not to say 124-grain ammo is inherently inaccurate. It just verifies the truth that every barrel/gun has a specific load that will deliver the best results. In this instance, none of these three pistols prefer 124-grain projectiles over 115-grain. In short, you must always work to find the load your gun likes the best.

Next, we moved from the bench to a standing, unsupported position. The distance remained 10 yards with a shot string of five rounds. For this stage, we matched each gun with the ammo it liked best at the bench. 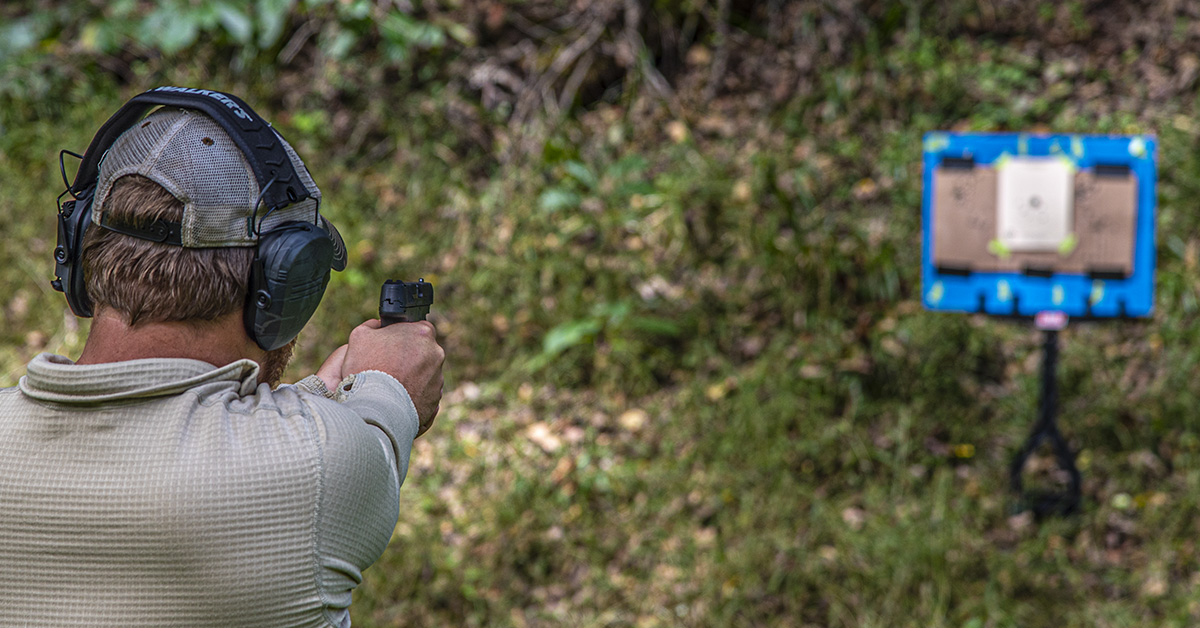 Since we established the accuracy potential of each pistol at the bench, this test would illustrate the variables introduced by the shooter as well as the ergonomic matchup between the shooter and the gun — a massively important but often overlooked factor. The results were:

We have mentioned here before the absolute importance of practicing and refining your firearm’s zero (pistol or rifle) from field shooting positions instead of relying solely on the bench. Guns shot from a bench rest tend to shoot differently (sometimes alarmingly differently) than when shot from supported and unsupported field positions. From the way you grip the gun and achieve sight alignment to trigger pull and follow-through, all are subtly and not-so-subtly different when you transition from the bench to the field.

Going by our bench test results, the natural assumption would be that our micro-compact GX4, consuming its preferred Blazer 115-grain ammo, would deliver the largest group of the three guns while the compact G3XL, with its longer barrel and sight radius, would shine with the smallest group.

Not so. Instead, the GX4, in the hands of our shooter, shot the smallest group, followed close behind by the G3XL with a 0.237-inch larger group. That certainly did not fit the expected pattern. Nor did the fact that the sub-compact G3C, with its favored Federal 115-grain Syntech, present the largest group — so large that we had to disqualify it from the final test because one of the rounds completely missed the target.

Was there something wrong with the G3XL? No. The respectable bench test proved that not to be the case. Was it shooter error? Always a possibility, but the only difference between the G3C and the G3XL is a 3/4-inch longer barrel and slightly different slide configuration. More importantly, the trigger and the sights are identical between the two models.

Will we ever know why these two guns shot so differently from an unsupported position? The best answer may be, “It’s just the unpredictable nature of gun, ammo, and shooter matchups.” Sometimes, it simply “is.”

Regardless, this test should give new handgun shooters something of a benchmark as to what they can expect from their compact-type pistols. Yes, variations in manufacturing quality, triggers, sight systems, ergonomics, and the like will produce varying results, as will changes in ammunition, as we have just seen.

Start by shooting your pistol at a reasonable distance — say, 5-10 yards — from a solid bench rest, using different ammunition brands, bullet types, and bullet weights to determine which the gun likes best. From there, do the same from a standing, unsupported position, following good marksmanship principles (stance, breath control, grip, trigger squeeze, sight alignment, etc.) and check your results. Done properly, you should see groups expand 1-3 inches when compared to supported shots taken at the bench. Doing this, you will eventually find the ammo your gun shoots the best, then it is a matter of practice, practice, practice using sound marksmanship techniques to shrink those groups a bit more and to sharpen your shooting skills.

This is one of those instances where the journey is a reward unto itself.