It doesn’t matter whether you are an Old West buff or simply appreciate the impressive engineering that goes into firearm construction, grab a handful of lever-action rifle and the response is always the same.

The reason lever-action rifles are so much appreciated (despite their relatively low numbers compared to bolt rifles or MSRs) is a subjective matter. Whatever the case, lever guns are neat, practical, and they are making a serious comeback more than a century after their heyday.

Of all the lever-action rifles past and present, none stand above the Winchester Model 1892. Designed by the legendary John Browning, this was the pistol cartridge rifle to have back in the day and its virtues are just as applicable now as they were in the late 19th century. These guns are light, nimble, easy to shoot, and accurate within their effective cartridge range. The 1892, in its various iterations and sources of manufacture, has served hunters, ranchers, lawmen, and home defenders for 130 years.

Now, with at least two generations of American shooters nurtured on defense-oriented firearms, it only makes sense that the iconic 1892-pattern rifle merge into the tactical scene. And that is exactly what 1892 replica manufacturer Rossi did when they introduced their R92 Triple Black series a couple of years ago.

Rossi has a long and reputable history for manufacturing Winchester 1892 clones, beginning in the 1970s, where the guns were made in Brazil. Variations of the Rossi 92 have come and gone over the years, but the company continues to hew to the “if it ain’t broke, don’t fix it” mantra by making these rifles as close to the original as is practical in modern times. Of the several intriguing models currently in Rossi’s production lineup, the newest is called the R92 Triple Black. This is a gun, chambered in .44 Magnum and .357 Magnum, intended to bring this proven platform into the realm of “tactical” in a loose sort of way. Functionally, the Triple Black is the same as its R92 stablemates, but a quick glance tells you this gun is ready for more than a gallop across the range. 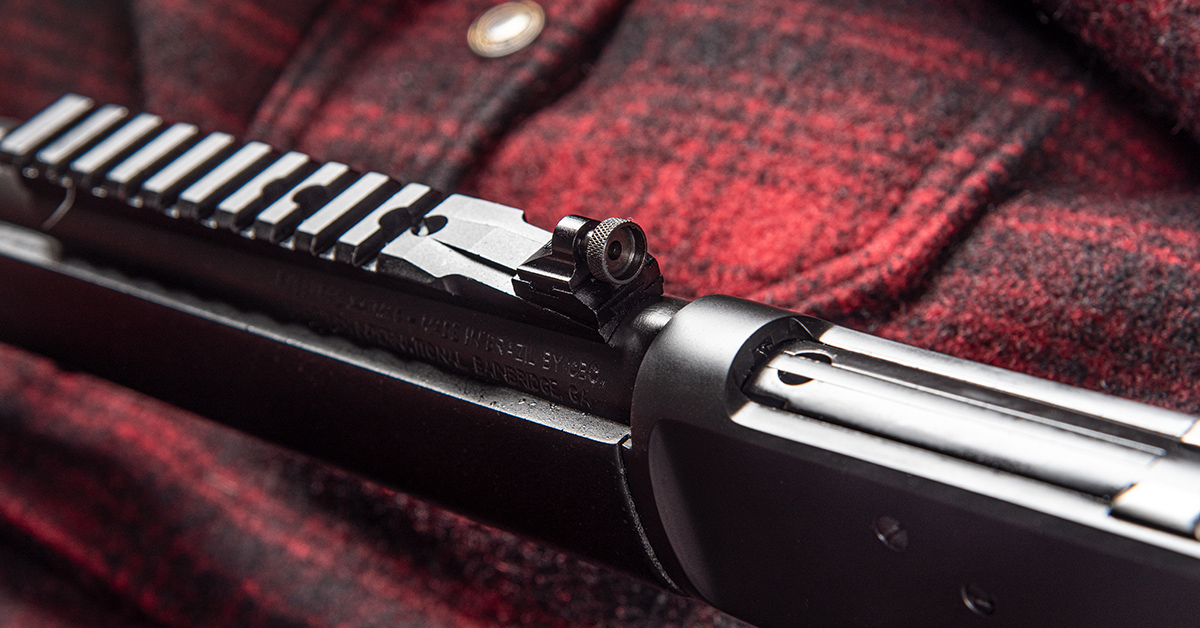 A rifle scope, though, is another matter. Since the R92, as with the original Winchester 1892, ejects empty cases out the top of the receiver, the optic mount must necessarily be well forward of the traditional scope location (which is closer to the shooter). This means that magnified optics are limited to those with a long eye relief (distance from the scope to the shooter’s eye). In other words, scout rifle-style scopes such as the Vortex Crossfire II 2-7×32 Scout Scope, Leupold VX-Freedom 1.5-4×28 IER Scout Duplex, or the Burris Scout 2-7×32. 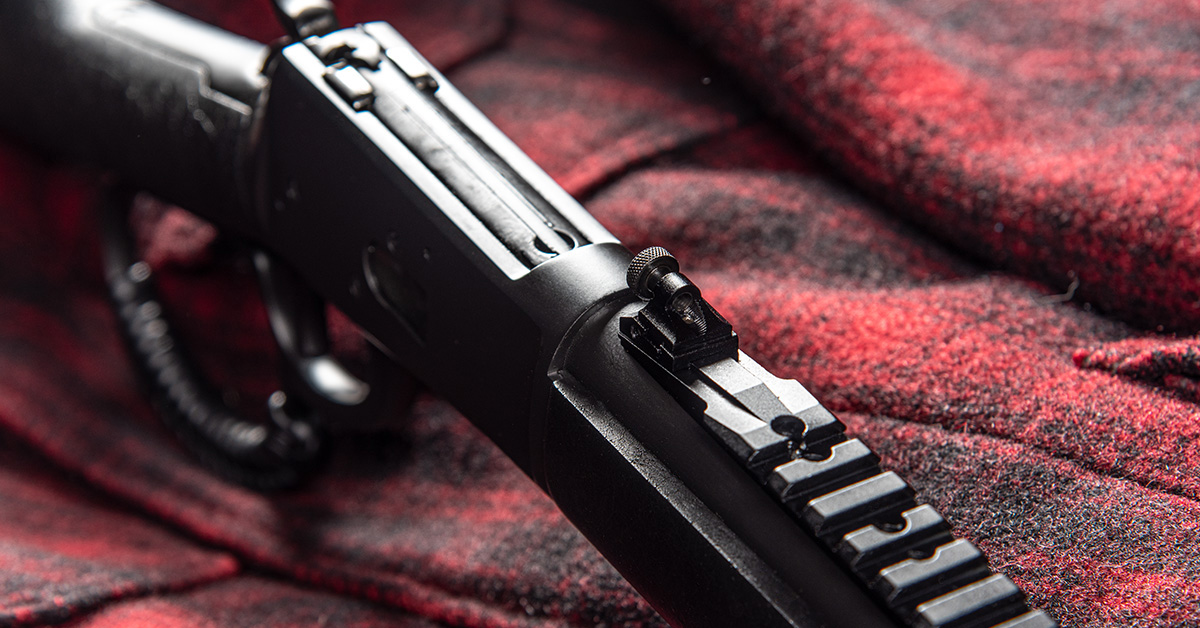 Personally, I favor shooting the Triple Black with open sights. Unlike other rifles in the R92 line that utilize a classic leaf spring and buckhorn rear sight configuration, the Triple Black has a peep sight ramp integrated into the back of the Picatinny rail. Loosen the set screw and move the sight up or down the ramp for elevation adjustment. There is also a set screw that keeps the sight from moving left or right in its dovetail groove. Again, loosen the screw to adjust windage. This is a more user-friendly setup than drifting the front sight with a hammer and brass punch to get the correct windage position. 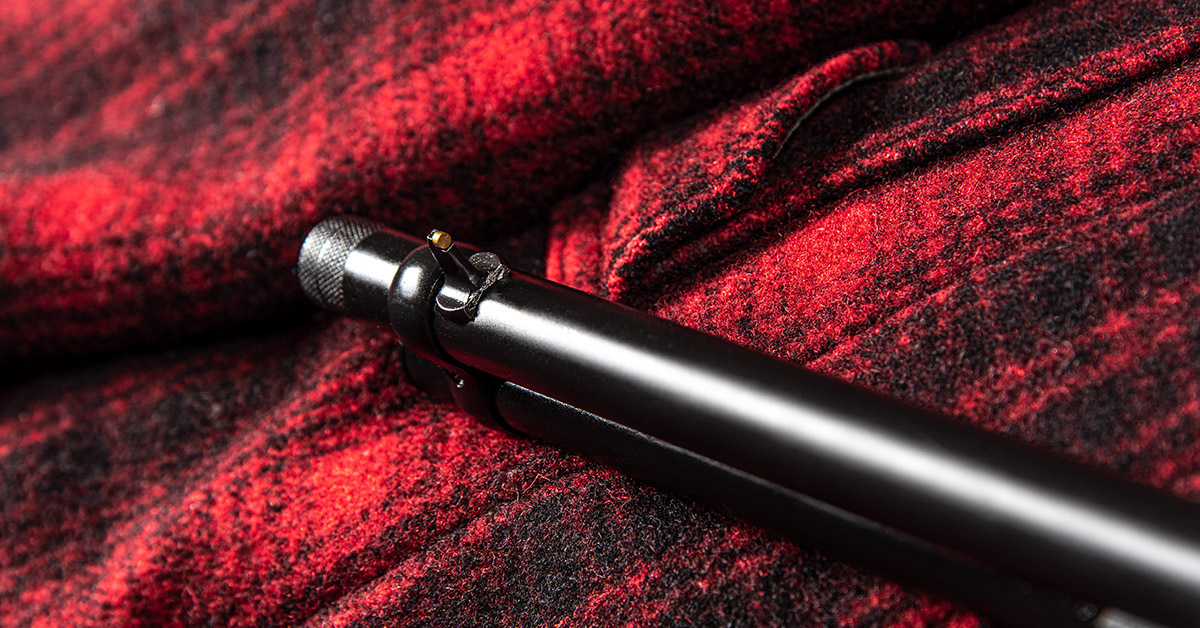 Why the open sight preference? For starters, it is a no-fail sighting system, which is what I want in a defensive firearm. Second, shooting with open sights keeps my marksmanship skills in check. Third, a “clean” rifle is more manageable, more maneuverable, and I don’t feel like I must be as delicate knowing that I won’t break expensive glass or electro-optics if it gets banged around. Also, I’m perfectly able to put a slug into the boilermaker of any medium-sized game animal at 100 yards (my practical limit of a pistol caliber for hunting). 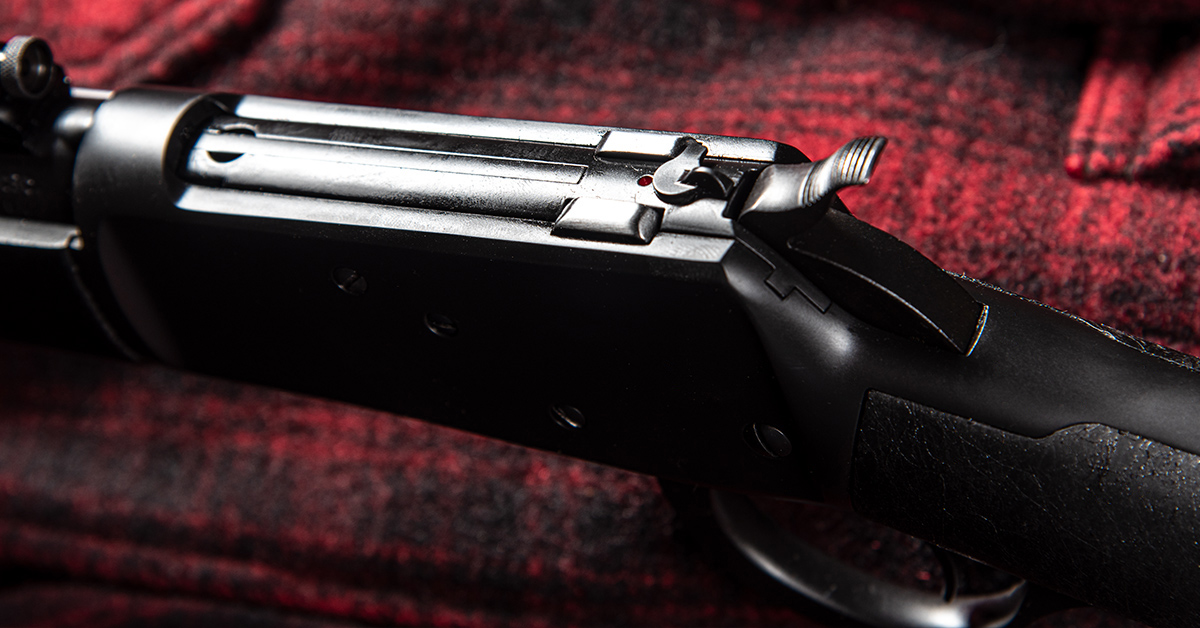 The R92’s breech and locking bolt assemblies deliver remarkably smooth operation, with close-tolerance fitment that allows the mechanisms to move with precision and absent any wiggle or slop. In other words, the lever action system “runs tight” but doesn’t feel tight.

Part of Rossi’s spin on the original Winchester 1892 is the thumb safety located at the top and back of the breech bolt. This is a locking lever that, when rotated 90 degrees, locks or unlocks the firing pin. Rotated to the FIRE position with the red dot visible, the firing pin will move forward to strike the cartridge primer when the hammer falls. Rotated 90 degrees counterclockwise to the SAFE position, the lever blocks forward movement of the firing pin.

When I first got the gun, the safety felt a tad stiff and required a hard push on the lever to get it to rotate. After working the safety several times, it smoothed out and now is easy to flip from SAFE to FIRE with a flick of the thumb while maintaining a positive lock in the ball detent. 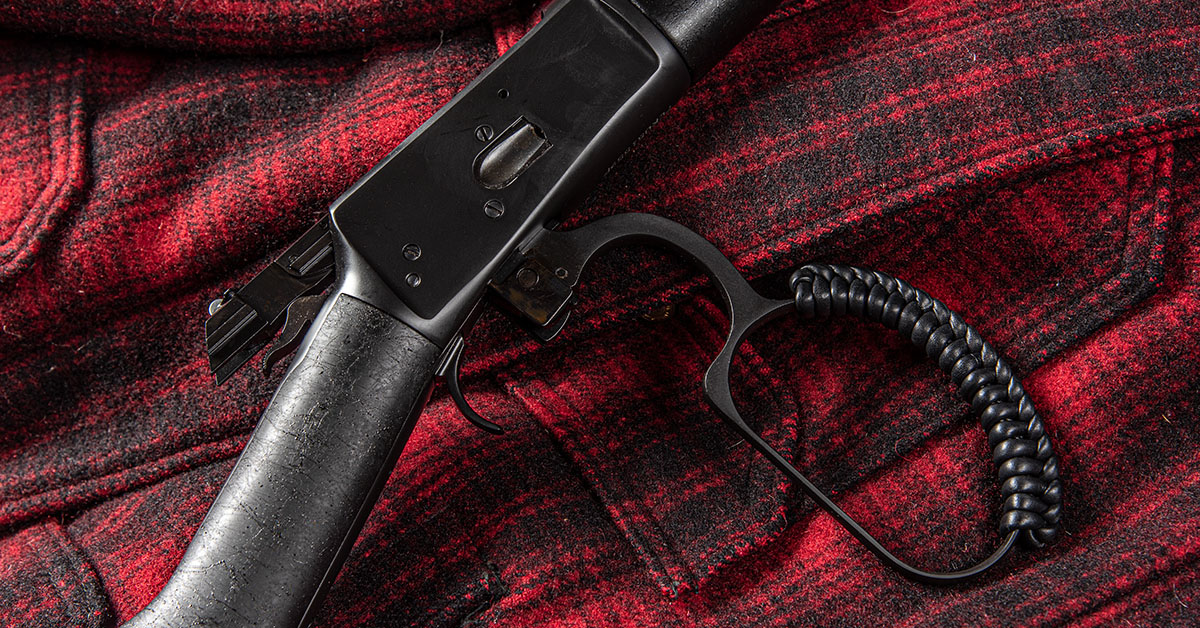 To facilitate operation while wearing heavy gloves, the Triple Black comes with a hoop-style lever rather than the thinner standard lever. A black synthetic wrap is included. 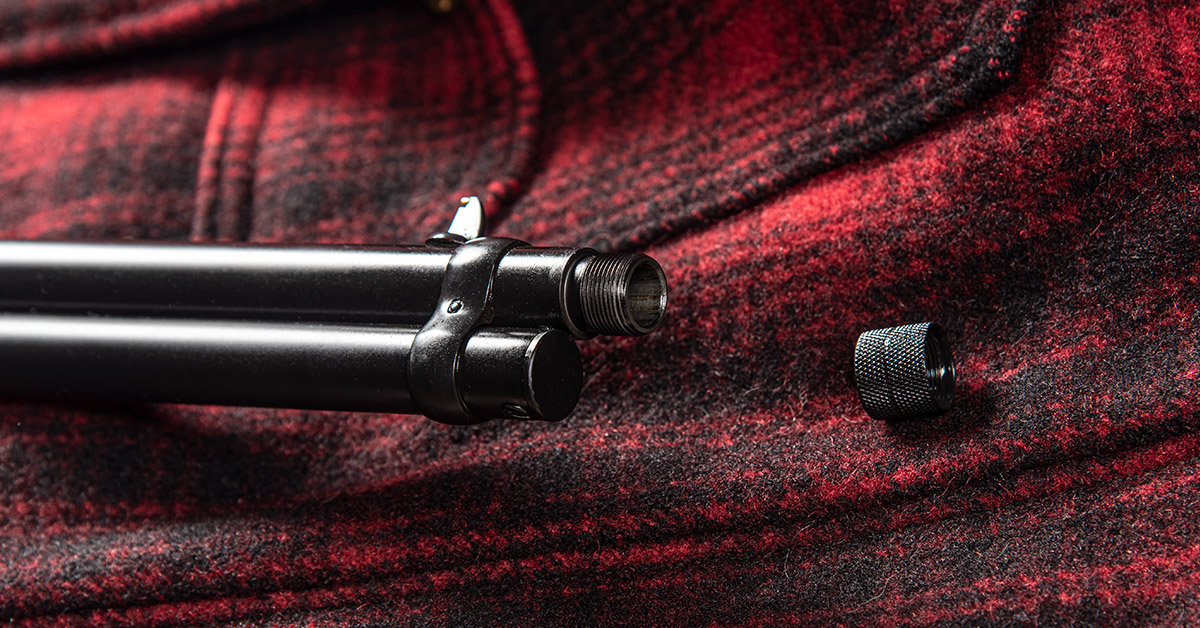 In another nod to accommodate modern tactical-style accouterments, the Triple Black’s barrel is threaded for a suppressor or aftermarket muzzle brake. A thread protector is included to run when the muzzle is bare.

Also in keeping with modern trends is the metal finish. What looks to be a satin black oxide is actually black Cerakote — the perfect compliment to a rifle that shuns all notions of living a pampered life. 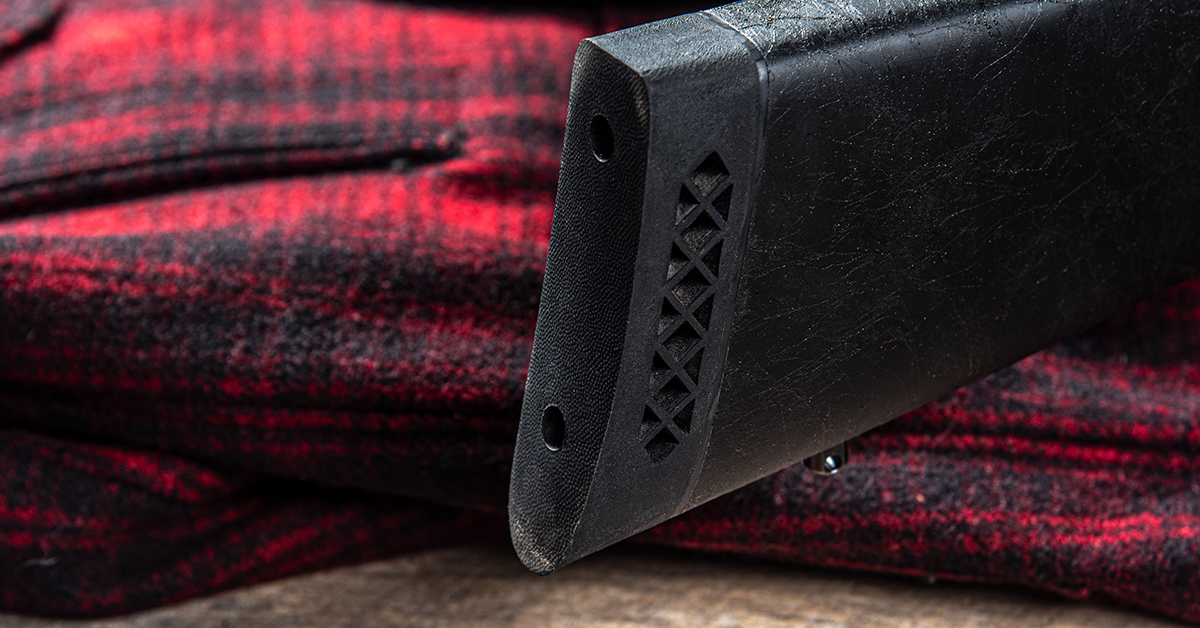 The furniture is made of Brazilian hardwood. It, too, receives a black painted finish accented by black webbing texture. The texturing adds a bit of grip to the stock wrist and forend while knocking down the highlights. Affixed to the stock is a plush butt pad. Not that the .44 or .357 magnums are “kicker” cartridges, but what recoil develops is quickly muted by the thick rubber.

Rossi has been leading the charge of the 1892 clones for many decades and has the platform pretty well dialed in. These rifles are fun to shoot, easy to carry, and are easy to feed if you are into pistol cartridge handloading. Now, with the R92 Triple Black on tap, old school rifle fans can easily make the case for a lever gun that serves every purpose, including home or truck personal defense.

What We Would Change: 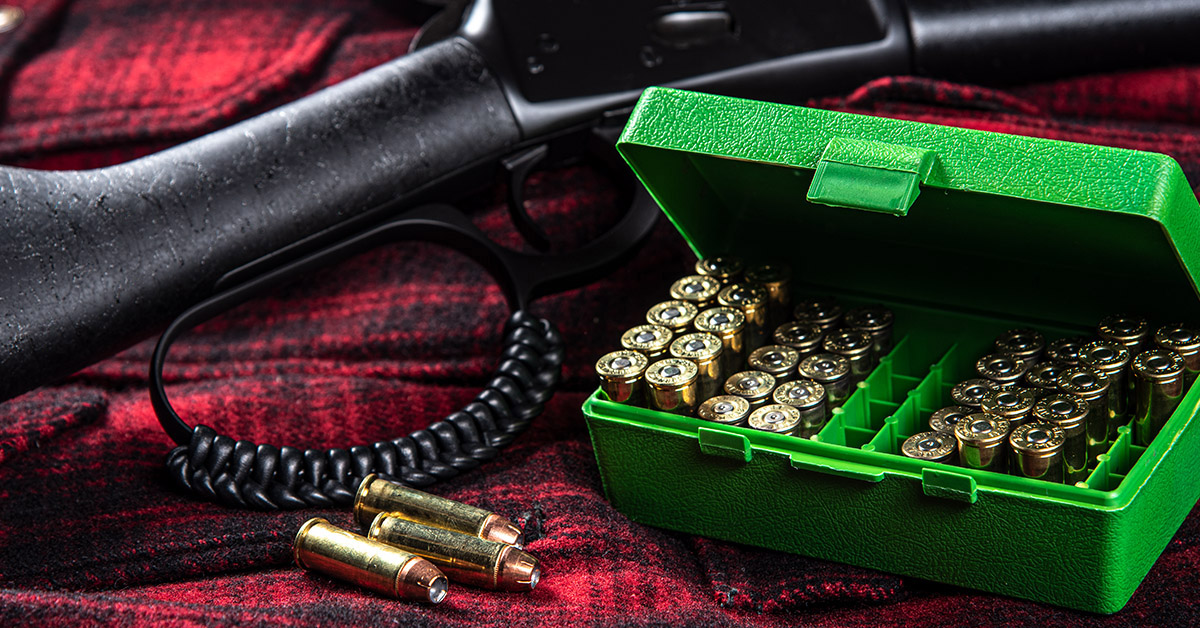