We have had this discussion with many people: fellow outdoor industry professionals, our hunting friends and family, and within the Shoot On office. We’ve heard the same tale repeatedly with the same concluding question… “Why does there seem to be a greater occurrence of minimal to no blood trails from animals taken with a muzzleloader when compared to that of hunting-caliber centerfire rifles?”

Obviously, many factors play into this—key among them being equipment accuracy and shot placement. But the astute and experienced observer will recognize that there is more to it than hunters making the occasional “off shots.” We’ve heard many an anecdote of whitetail deer recovered with pass-through shots into the vitals that traveled sometimes remarkable distances with nary a drop of blood to follow.

Our best determination is that, in some instances, bullet construction combined with the generally lower velocities of the muzzleloader (compared to, say, a .30-06, .270, or 6.5mm Creedmoor) sometimes simply “poke holes” in medium-sized game without delivering the kind of hydrostatic shock and expansive destruction necessary for easy-to-follow blood trails, let alone putting an animal down within yards of the shot. Sure, the kinetic energy is there, but if the bullet is unable to expand sufficiently in the soft regions, the kind of terminal performance we hope for and expect may not happen. Hence the often-lackluster blood trails and delayed expiration of our game.

Recently, the engineers at Hornady set out to make a better muzzleloader bullet—one that combines all the experience gained from developing precision centerfire rifle cartridges for hunting and target shooting into a platform suited to the needs of lower-velocity muzzleloaders.

Now, Hornady has no minor track record when it comes to developing projectiles to meet specific performance parameters. The company has been in this game since 1949 and along the way has developed several bullet technologies and cartridges that have set industry standards and expectations, chief among them the .17 HMR, the 6.5 Creedmoor, and game-changing innovations like the Flex Tip and Heat Shield Tip for maximizing overall function, accuracy, and terminal performance in hunting and long-range cartridges.

Throughout the development of this new muzzleloader bullet, Hornady engineers hewed to the company’s core principles: accurate, deadly, and dependable. The result is the all-new Bore Driver FTX, a .50 caliber “looks-like-a-sabot-bullet-but-isn’t” bullet that incorporates the same focused development and manufacturing processes imbued in all Hornady precision ammunition. 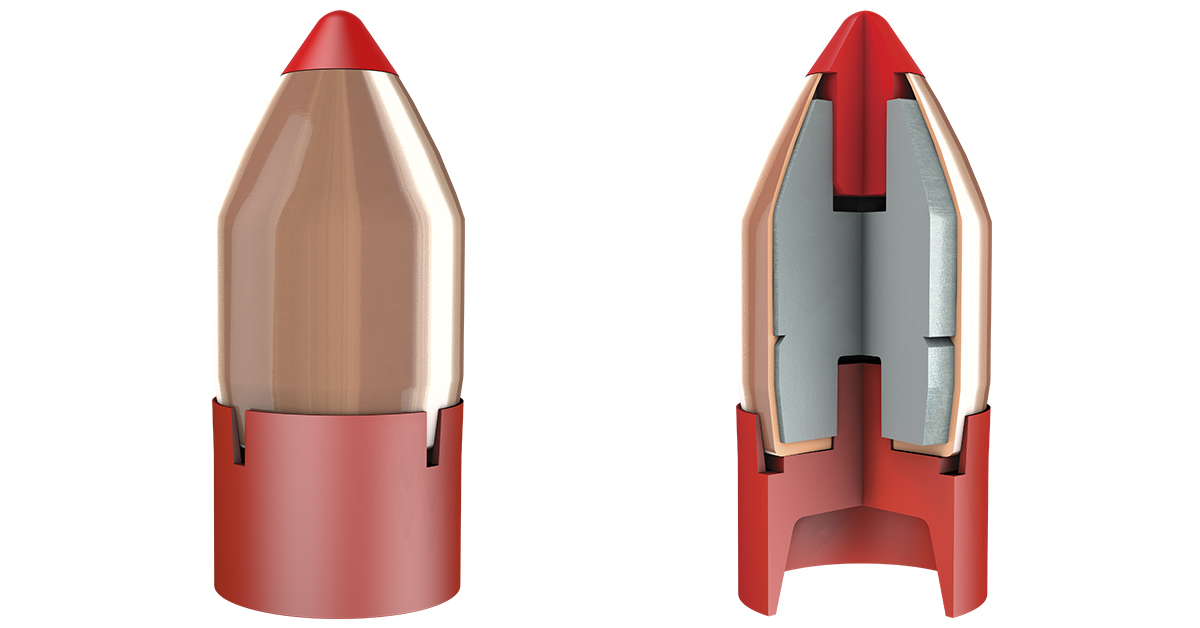 As you can see from the above illustrations, the Bore Driver FTX may look like a typical sabot muzzleloader bullet from the outside, but the cutaway view reveals that the bullet’s complex construction and atypical design make it anything but.

Conventional copper/lead muzzleloader bullets feature a straight shaft that terminates with a solid, flat base. This type of bullet is also undersized for the barrel bore (i.e.,.50-caliber rifle/.45-caliber bullet). To make the undersized bullet work, a sabot is installed onto the base of the bullet. The sabot seals the expanding gas behind its skirt to propel the undersized bullet down the barrel and to engage the barrel’s rifling to impart a stabilizing spin. 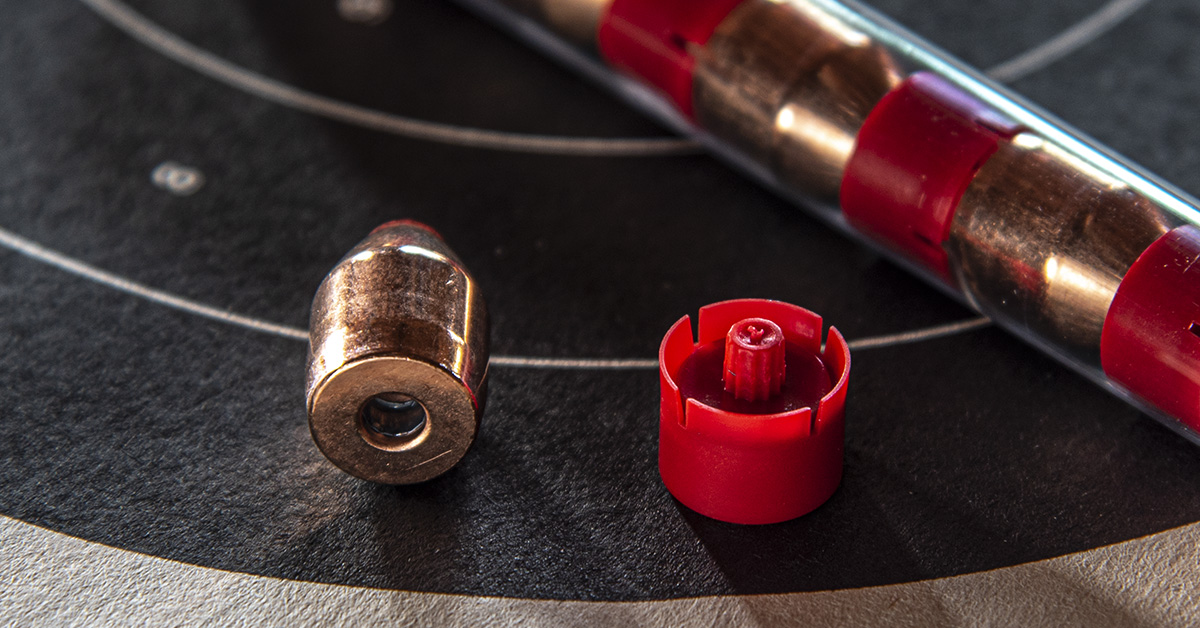 This two-piece arrangement works, but there are challenges. One problem with conventional sabot muzzleloader bullets is that they can be difficult to push through a rifle bore…especially after the first shot or in cold weather. Secondly, the tight fit of most sabots means that some of the plastic is usually scrubbed off and left in the rifling after the shot. This plastic can be difficult to remove, and the buildup can increase the force necessary to push subsequent bullets down the barrel.

Rather than follow a familiar path in developing the Bore Driver FTX, the Hornady engineers began with a fresh sheet of paper, starting with the bullet’s bearing surface (caliber) diameter. They went with a .50 caliber (.499-inch) instead of the usual .45 caliber (.452-inch) bullet diameter and included a boattail profile. The boattail terminates in a flat base, but one with a recessed channel in the center that passes through the copper jacket and into the lead core. 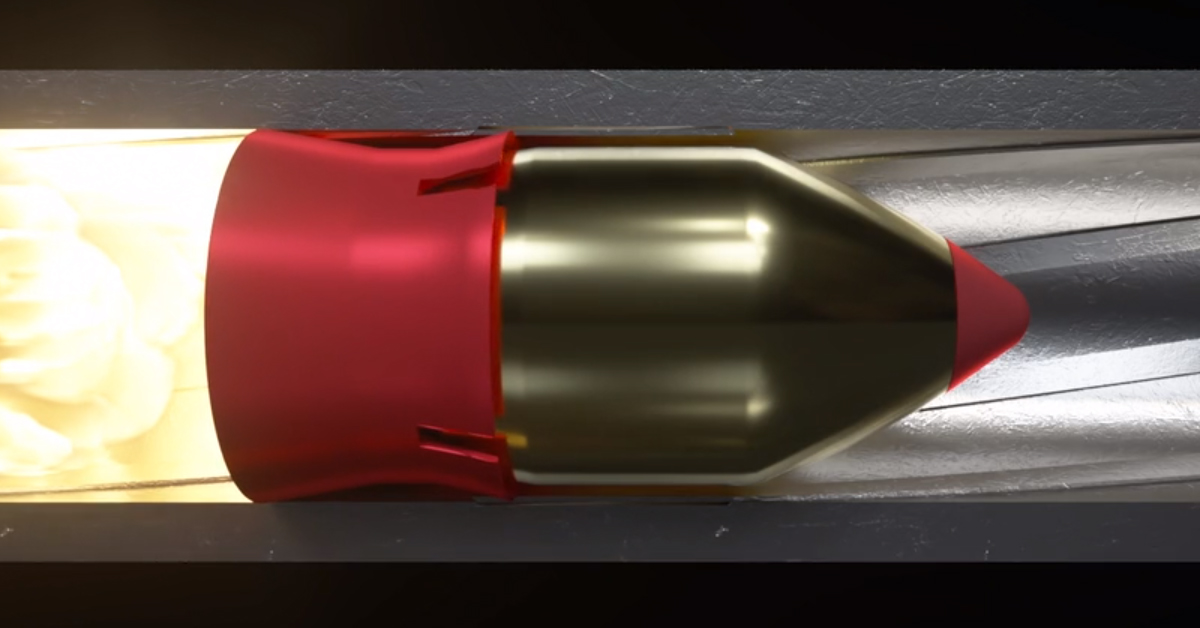 Under pressure of the expanding gas, the skirt base engages the base of the bullet (much like a friction clutch), and the post expands as it pushes into the bullet, effectively locking with the bullet to impart the spin of the skirt as it engages the rifling. Finally, the top of the skirt engages the bullet’s boattail section to further “unitize” the bullet and skirt combination, ensuring maximum bullet rotation as the bullet exits the barrel and travels toward the target. The combination of these three skirt-to-bullet engagement points delivers the reliable spin that is so critical for bullet stabilization and, thus, accuracy.

While the boattail profile of the Bore Driver FTX works in concert with the skirt to ensure a stabilizing spin, this profile also provides a bit of aerodynamic boost, just as it does with precision long-range ammo.

More important, though, is the bullet’s construction. The copper jacketed design promotes a more controlled expansion compared to copper-plating, ensuring the Bore Driver FTX penetrates deeply through the tough hide and bone of big game animals with good energy transfer. 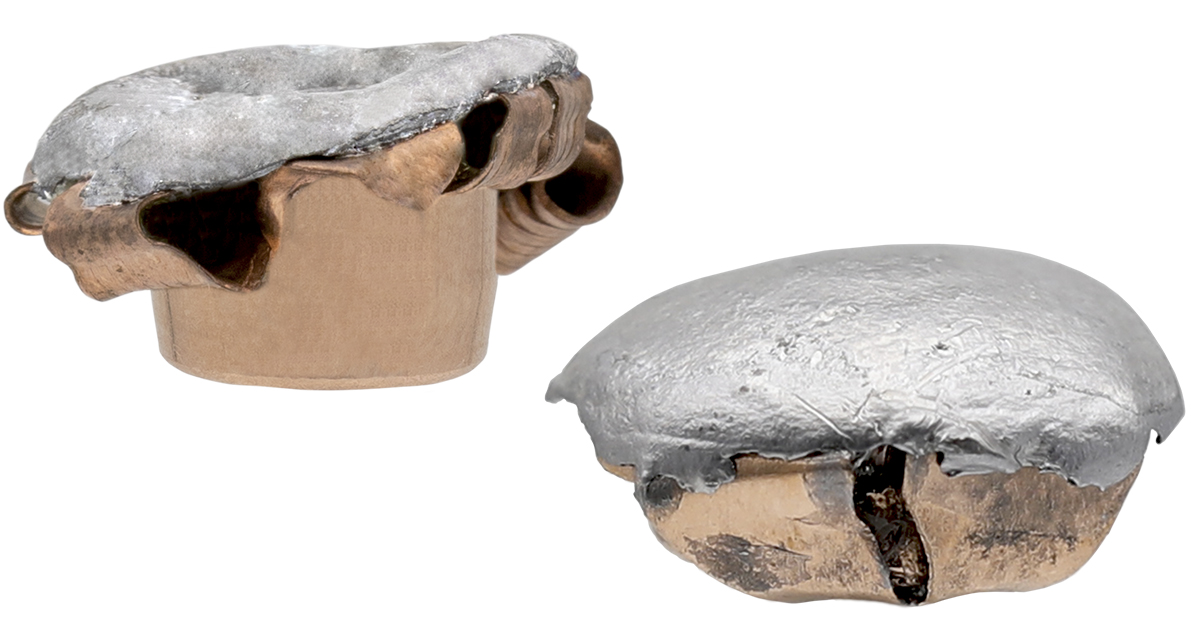 Much of that energy transfer is credited to Hornady’s InterLock construction. The InterLock ring, part of the copper alloy jacket, locks the lead core to the jacket to prevent separation and to promote maximum weight retention. This translates to improved expansion and a harder “punch” as the bullet moves through the animal. 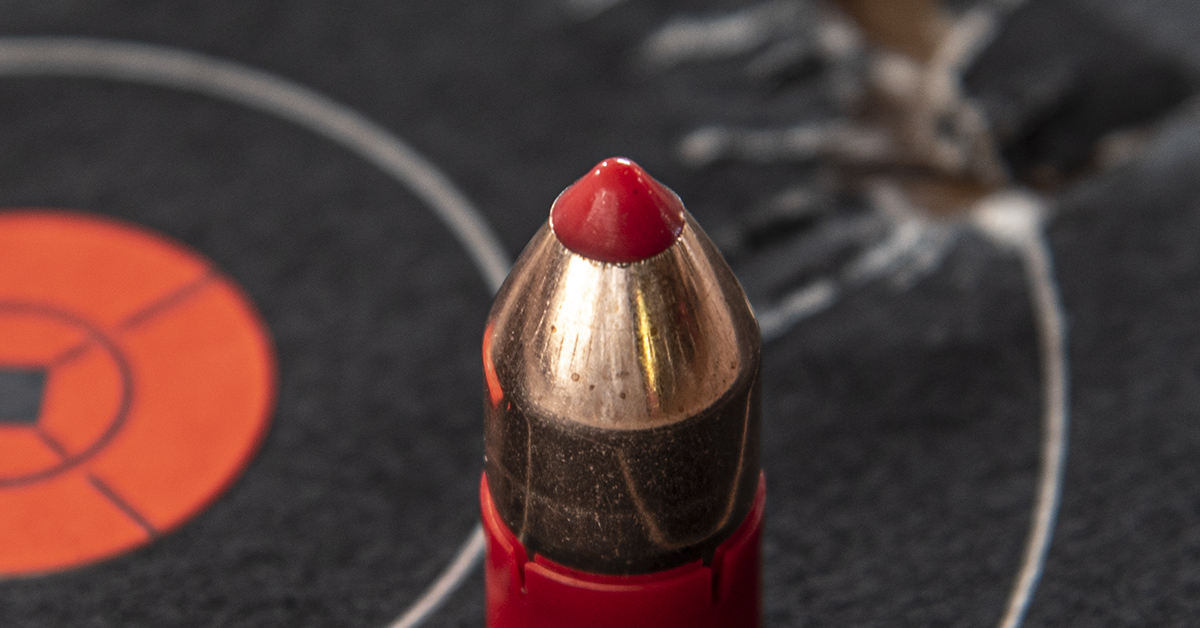 The real expansion factor, though, comes from the bullet’s namesake tip—the FTX, or FlexTip. This is not a hard tip, as is seen on some tipped muzzleloader bullets. Rather, FlexTip is a soft polymer that, upon impact with the target, “balloons” inside of the lead core and copper jacket composite to initiate a decisive and controlled expansion.

We mentioned at the beginning of this article that the anecdotal evidence and reports we’ve seen over the years hint that the terminal performance of some muzzleloader bullets may be lacking given the typically lower velocities of muzzleloaders. Without sufficient velocity and/or structural design of a bullet to significantly expand in soft tissue when propelled at these lower velocities, entrance and exit holes may be dismally small, soft tissue damage may be minimal, and blood trails can be downright pathetic. The Bore Driver FTX was developed specifically to deliver the kind of terminal performance that mitigates these problems, allowing the bullet to not only expand and produce catastrophic damage on thin-skinned game like whitetail deer, but also to retain weight and to ensure deep penetration on tougher critters like elk and moose. 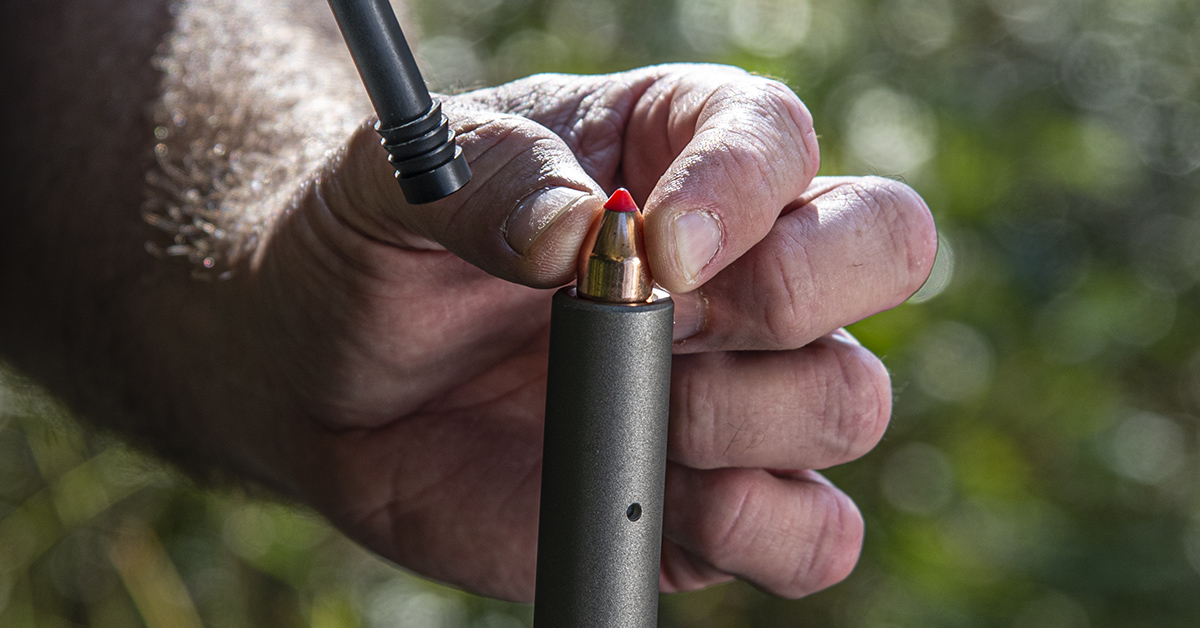 Another performance parameter established early on for the Bore Driver FTX was to make the bullet easy to load, especially in frigid temperatures. Although we did our testing in September with temperatures in the mid-70s, it became immediately clear that Hornady’s engineers accomplished this mission.

The first bullet slid into the clean and lightly lubed barrel like a smooth bourbon. Reloading the second shot without cleaning the bore, there was slightly more resistance due to the powder fouling, but nothing like we usually encounter with conventional sabot bullets. The third bullet seating added just a tad more resistance, but still of minor note. 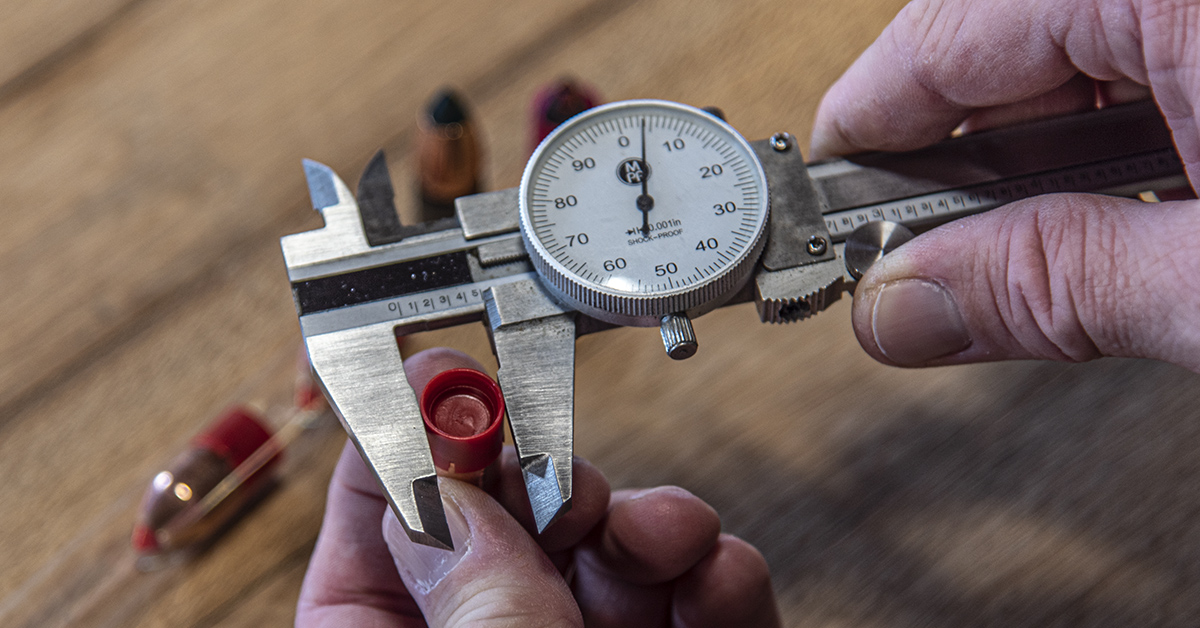 Out of curiosity, we measured the base of the Bore Driver FTX skirt diameter and checked that against the sabot diameter of two different bullets we had on hand. The Bore Driver FTX skirt had a maximum base diameter of .504 inches, or .004 inches over the bore diameter. One of the other brand sabots proved to have slightly more girth at .506 inches (this bullet is relatively easy to seat but takes a bit more effort than the Hornady). The next sabot sized at .510 inches in diameter.

Those numbers may seem small, but when you’re trying to stuff a bullet down a fouled barrel on a cold day (plastic becomes less pliant in cold weather), a few thousandths of an inch can make a big impact on reloading effort. 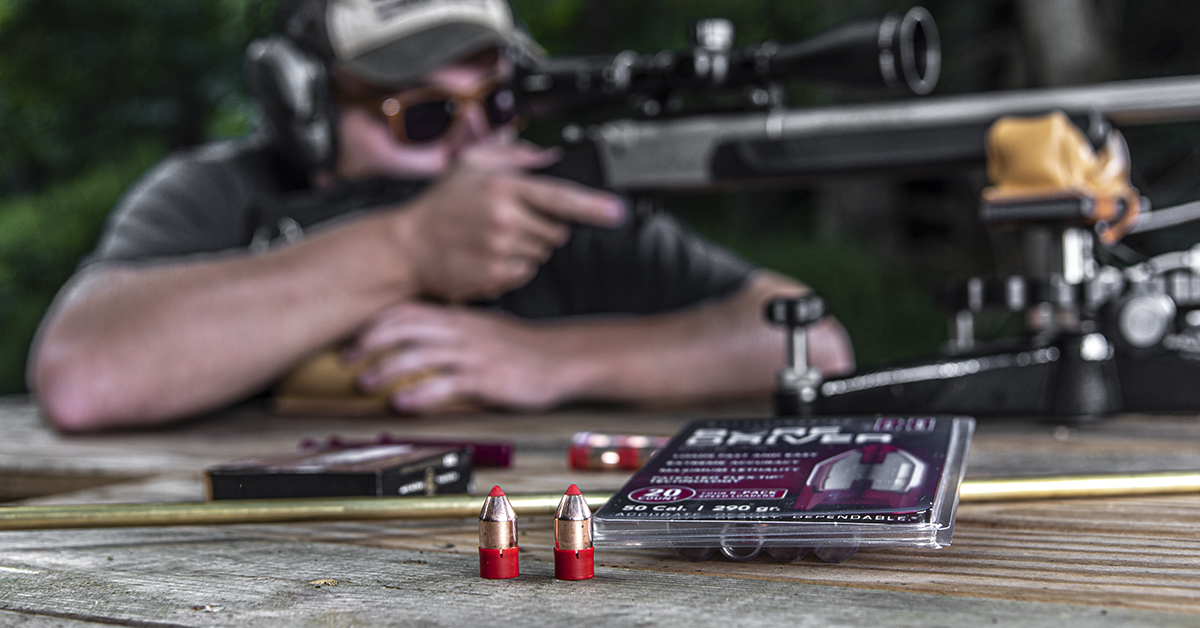 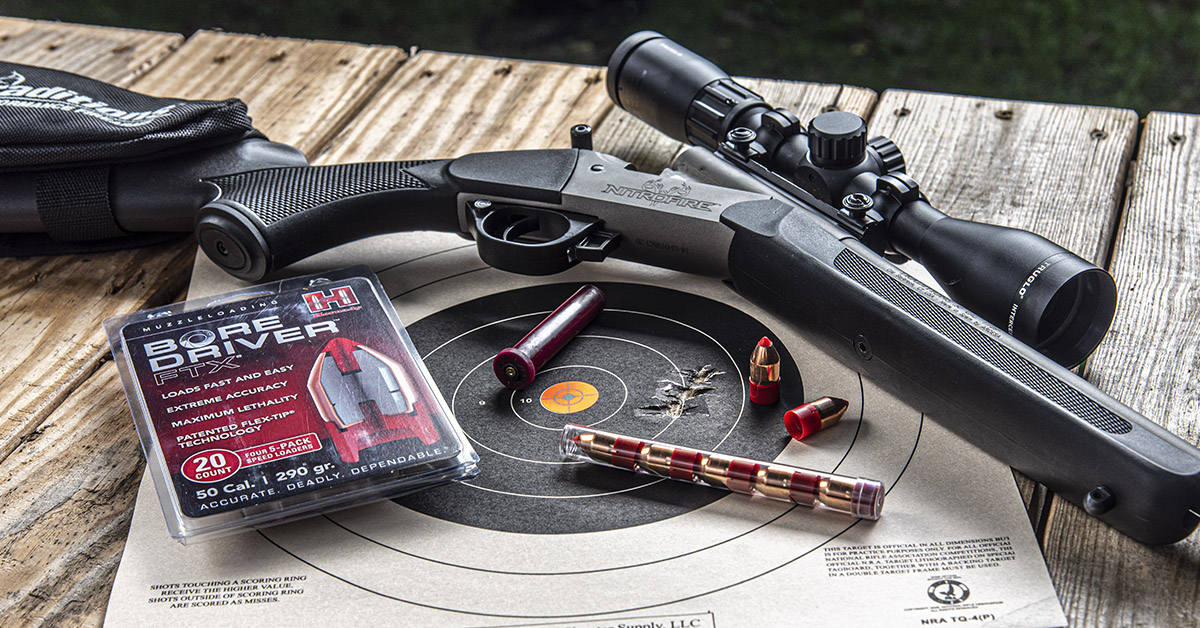 Our test rifle certainly favored the higher pressures of the 120-gr. eq. FireStick load, delivering a best 3-shot group of .881 MOA. The 100-gr. eq. load opened the group slightly for a 1.339 MOA. No doubt, experimentation with different powder loads and barrels would tighten things up even further, but for a hunting muzzleloader combo, we’ll take that kind of performance any day.

Although muzzleloader season is still a couple months away as of this writing, we’ll definitely be giving Hornady’s Bore Driver FTX some field work this year.

If you have experienced lackluster terminal performance or accuracy issues with conventional sabot muzzleloader bullets, you might want to grab a couple different powders along with a pack of Bore Driver FTX and work up your own accurate load. There’s a good chance you will make those sometimes-difficult muzzleloader tracking jobs a thing of the past.