These high-performance 1911s are always first to the finish line

As a middle schooler, I read a series of books by C. B. Colby that covered many types of firearms. He was a prolific writer and wrote in a simple, straightforward, and informative manner. I was most interested in the 1911 type handgun. Later, I began reading Colonel Cooper’s clear, incisive writings on the 1911.

I have since owned and carried the 1911 for more than forty years. I have worn the pistol in police service, fired it in competition, and taken medium-size game with the 1911. I favor .45 ACP 1911s, although I have tried the 10mm and .38 Super — even the 9mm variants. I like the low pressure, clean powder burn, and modest muzzle signature of the .45 ACP. Despite quite a bit of revisionist history and questionable science, the .45 ACP offers superior wound ballistics to a small-bore cartridge. I don’t carry a 1911 because it is expected of me but because I have found I shoot it best and it does the business as intended.

Today, there are bargain basement pistols made of inferior material. I would prefer a GLOCK or a CZ to a cheap, unreliable 1911. There are also very good middle-of-the-road 1911 pistols from Springfield and Kimber, and Colt is going strong.

Then there is Les Baer. 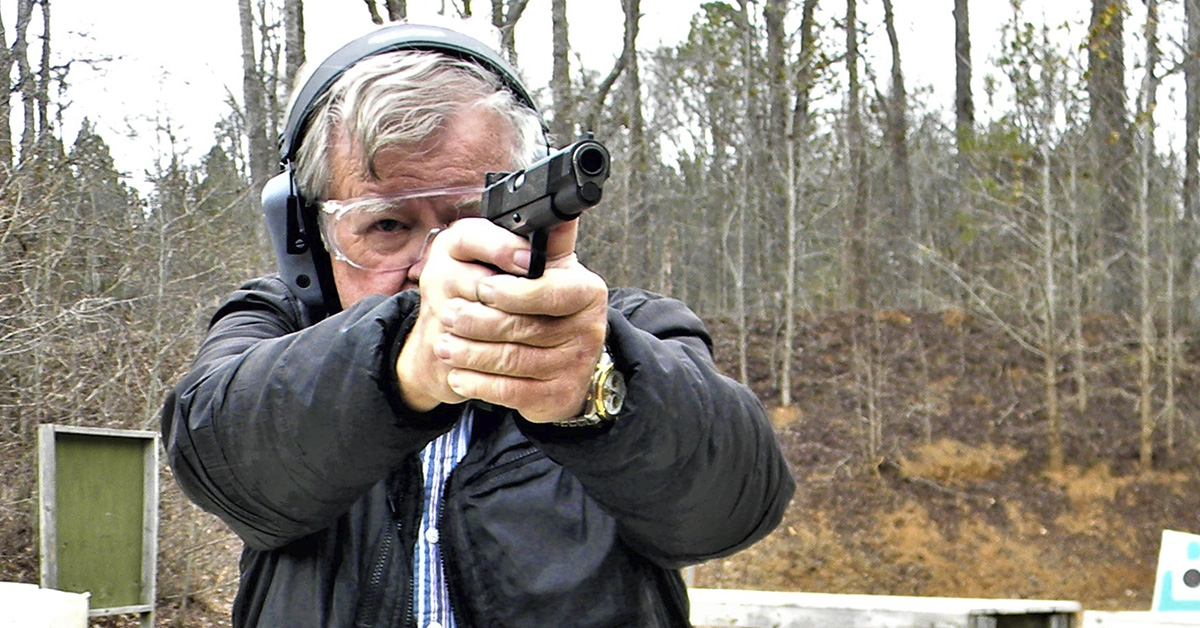 Les Baer has mastered the gunsmith’s art. He began working with drag cars, blueprinting engines. Precision, close tolerances, and exacting specifications were part of his learning process. In a nutshell, the best performance comes when tolerances are tight. There is less wear with tighter fit. The parts go back into place in exactly the same manner each and every time the parts move. This means that wear is smooth and even. The more loose the fit the more chance of eccentric wear.

Les Baer developed his gunsmith skills to the nth degree. The Les Baer facility manufactures its own frames and slides. The fitting is individual. These are true custom grade handguns. As a result, they are not inexpensive. Les Baer pistols complement a trained and disciplined shooter. Like many custom grade tools, they must be understood before they can be used profitably. 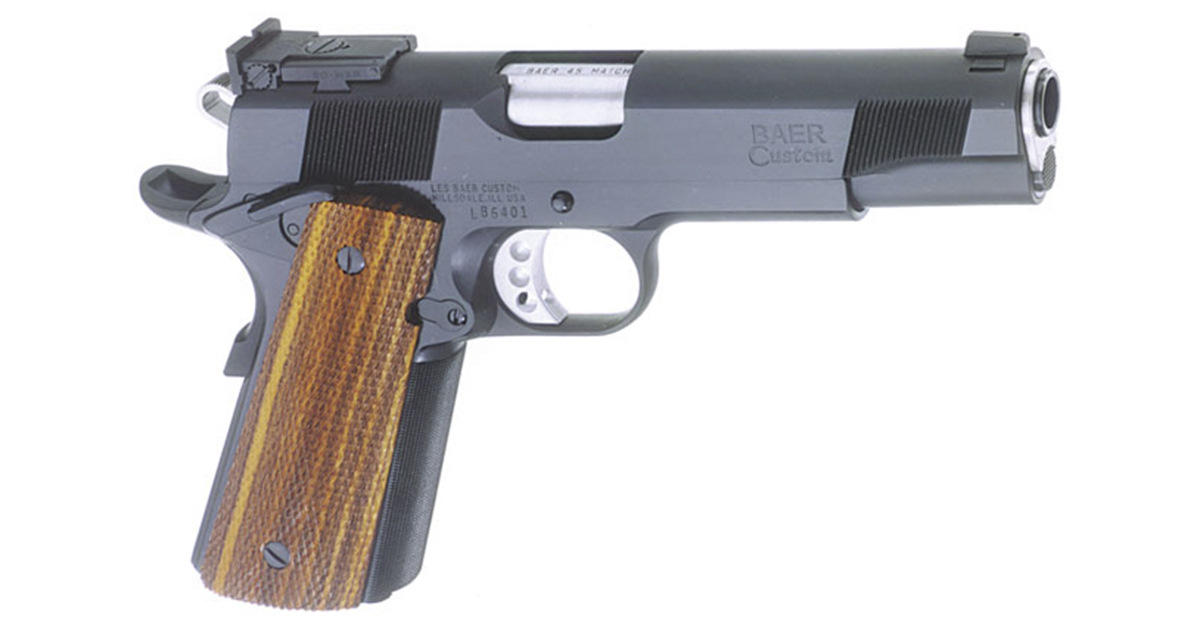 This is the original Les Baer pistol. Mine isn’t a pristine safe queen. The slide has some wear around the muzzle. The beautiful blue finish is still gorgeous, and the wear is honest. The pistol sets well in the hand.  A serrated mainspring housing, checkered grips, and a nicely done checkered grip strap make for a good balance of abrasion and adhesion.

The beavertail grip safety releases its hold on the trigger about halfway into compression. This beavertail is essential for those using the 1911 with the modern technique. When you use the “thumbs forward” grip, sometimes the palm creates a cup and releases the grip safety. This beavertail safety prevents this. The hand is funneled into the grip and the bore axis is lowered slightly. 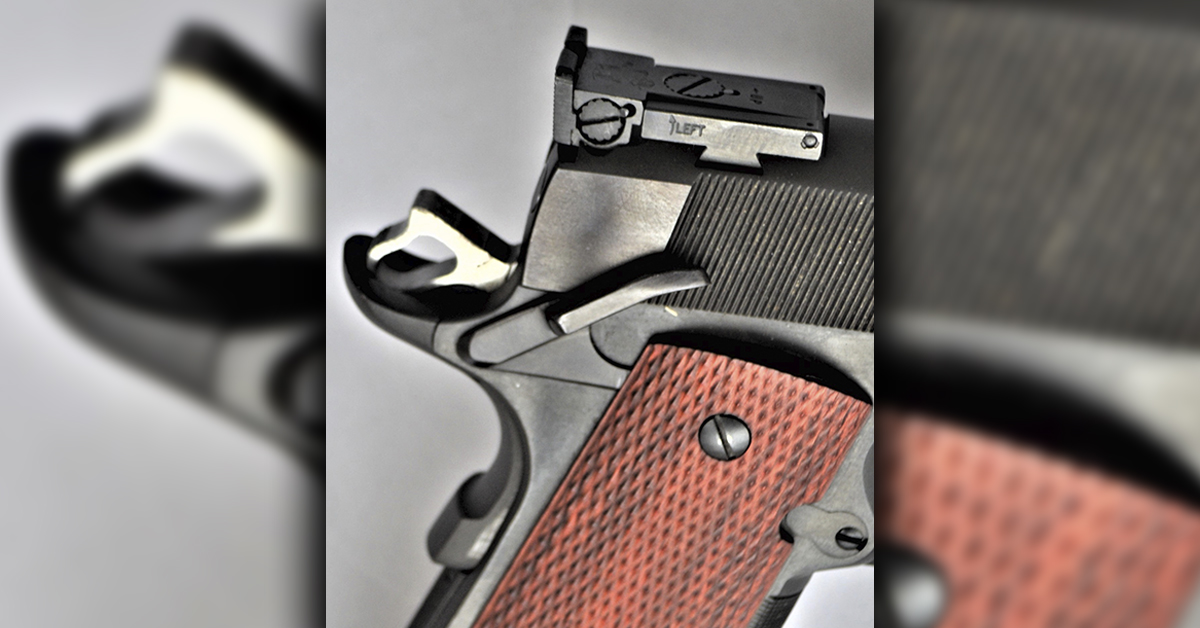 The ambidextrous slide safety is similar to the original Swenson. While this may be a target gun, many handguns offered for defense use have only a single safety lever. 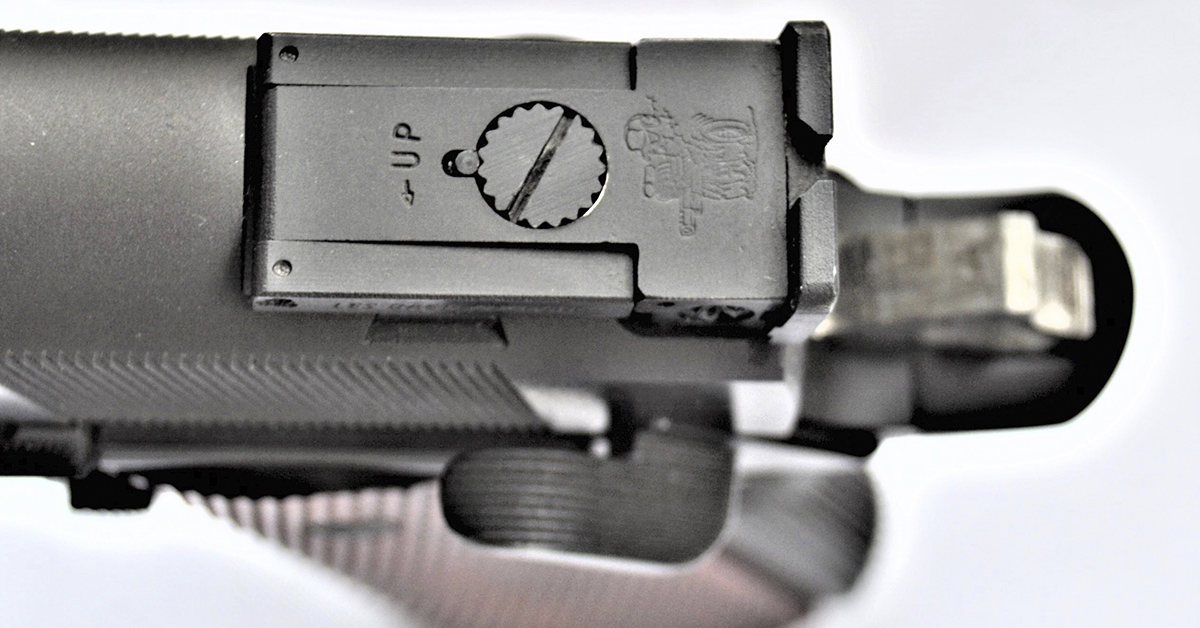 The pistol employs a rugged and durable fully adjustable rear sight. The front sight is a dovetail post. The pistol features forward cocking serrations. The serrations, front and rear, are very well cut and finished. The barrel-to-frame lockup is superb. The slide rolls smoothly. The movement of the locking lugs tells us that someone who knows what they are doing has put this pistol together. The pistol requires a barrel bushing wrench for disassembly. Considering the pistol is capable of the finest accuracy, this isn’t a drawback. The slide-to-frame fit is tight, very tight. It takes effort to pull back the slide. The result of this fit is that the pistol requires a break in. Several hundred rounds are required before the pistol begins to function properly. Use full power hardball equivalent loads (230 grains/830 fps). I have owned one Les Baer that required a modest break in while the Hemi 572 (more on that in a moment) came out of the box running. The Premier was found used. Someone did the break in for me. 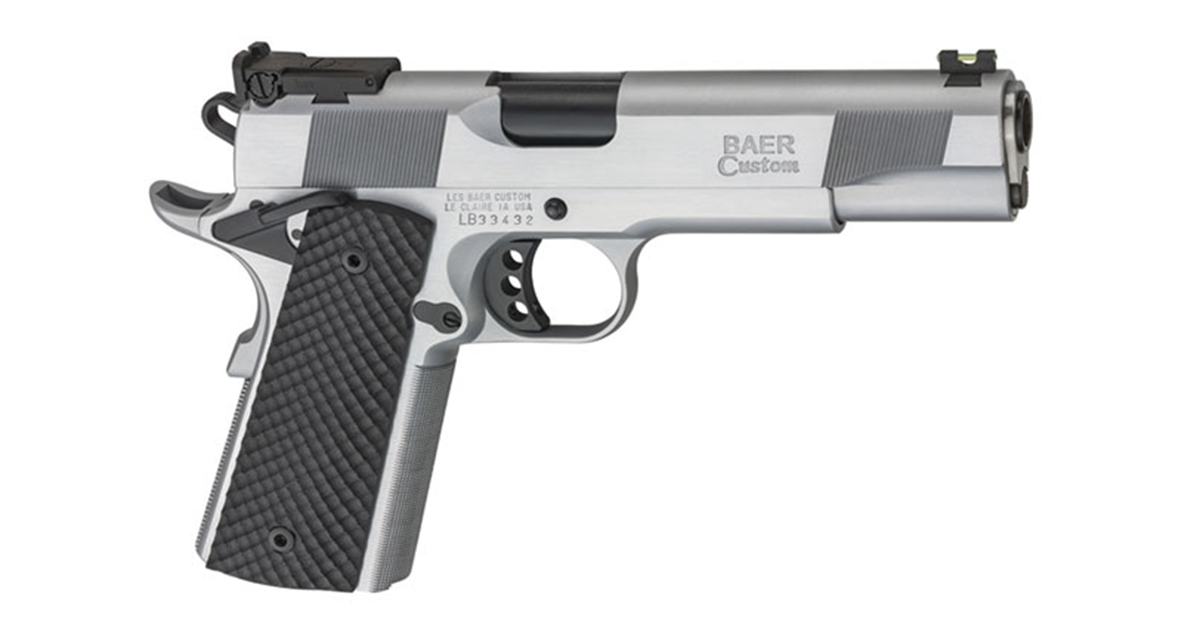 The second handgun is a newer offering. The Hemi 572 is named after Les Baer’s drag car. Just as this was the ultimate drag racer, this pistol is the ultimate 1911, according to Les Baer. I cannot say he is wrong. This 1911 is chrome-plated, although it may appear stainless at first glance. Everyone has a stainless-steel pistol. This one is different than the stainless handguns. Small parts are placed in durable, self-lubricating Dupont S coating — an attractive deep black finish.

The pistol feels and handles much like the Premier pistol. The appearance is significantly different. The sights are the same, as are the cocking serrations. Each pistol is very tight. The Hemi 572 features G10 grips. These are tacky grips with a good feel. The appearance and style of this pistol are not for everyone. The Hemi 572 is loud, almost in your face. I looked it over in the showcase for a week before I made the decision. The look has grown on me. The pistol features a fiber optic front sight.

A word on tightness, fit, and precision. A gunsmith made a criticism of the Les Baer in that the pistols are not ‘MILSPEC’ — whatever that may be. I understand the need for consistency in fitting and upgrading 1911 handguns. The Les Baer is a different tool — a true custom pistol. There is no need for parts replacement or upgrades. In the event you eventually need an extractor or a firing pin stop, they are no problem to replace. The pistols are designed for accuracy, precision, and long-term reliability. These handguns are as fault-free as humanly possible.

The trigger action is superb (I could add more adjectives). The 1911 trigger isn’t something to be trifled with. I do not recommend attempting a trigger job on any 1911, especially on an inexpensive 1911. If you need a better trigger action, add a complete drop-in parts kit from a reputable maker. You will be glad you did. The pistol’s trigger action is devoid of creep or backlash. Good 1911 pistols have a sharp reset. The Les Baer’s is very crisp. Les Baer guarantees a four-pound trigger action. The Premier breaks at exactly 4.1 pounds on the RCBS trigger pull gauge. I used the RCBS and a Lyman registering trigger compression gauge to test the Hemi 572. This one breaks at 3.9 pounds (the Premier has seen much more use). 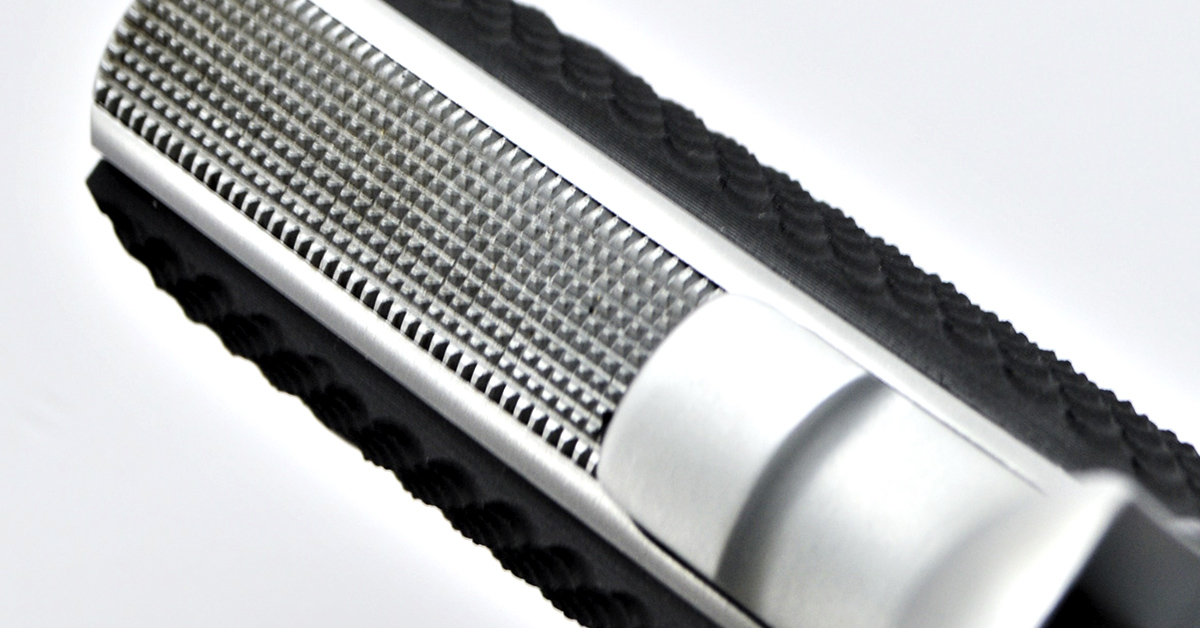 These handguns come with an accuracy guarantee. The guarantee is a three-inch group at 50 yards. At that range, the front sight tends to subtend the bull’s eye. I do not own a machine rest. I use the MTM Case-Gard K-Zone rest and find it more than adequate for 25-yard accuracy testing. I cannot verify the 50-yard three-inch standard but it certainly seems like these pistols are capable of this standard.

On several occasions, I have fired three-shot groups at 25 yards and found two bullet holes touching. The single best five-shot group at 25 yards has been with Federal 230-grain Hydra Shock. The Premier put five of these into 1.25 inches. The Hemi 572 has done best with the Hornady 200-grain XTP, posting a 1.75-inch group. The Premier cut a 1.8-inch group with Hornady, the Hemi 572 a 2.0-inch group with Hydra Shock. All quality pistols prefer one load to the other. The shooter also has something to do with the equation.

Ninety percent of the work I have done with these pistols has been off-hand. Firing either gun off-hand is a joy. The pistols come on target quickly. They are controllable. After all, we are firing a 40-ounce .45 ACP. Recoil isn’t a problem. Fire, allow the trigger to reset, get back on target, fire again. The pistol is easy to get hits with and is easy to love.

As for pricing, I did a search and found a few for sale, but most sites were out of stock. The Premier will run from $2500 to $2800 average; the Hemi 572 a few hundred more. Occasionally, a used example will show up. These are often a real bargain, priced forty percent or so under retail. 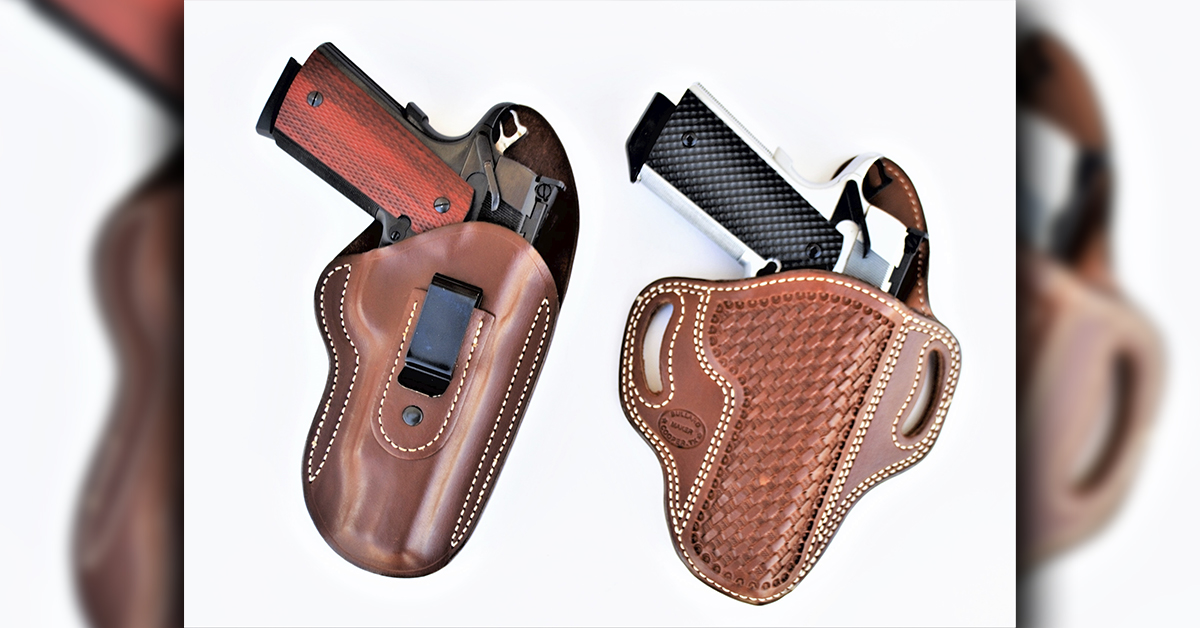 I use my Les Baer pistols and carry them occasionally, so I need good leather. Among the finest combinations of value and craftsmanship are the holsters handcrafted by Bullard Leather. Since I sometimes carry the pistol under light clothing during the more humid months, I also have an inside the waistband holster with a strong belt clip.

I like everything about these handguns. They are highly developed examples of my favorite pistol. The trigger action is superb, and the sights are excellent. The fit and finish are among the finest in the industry.

Any criticism about a Les Baer 1911 would be the same things we don’t like about any 1911. Just the same, the pistols are heavy, yet a lighter gun would not do what these will do. Perhaps the Les Baer Stinger would be a better choice for concealed carry. 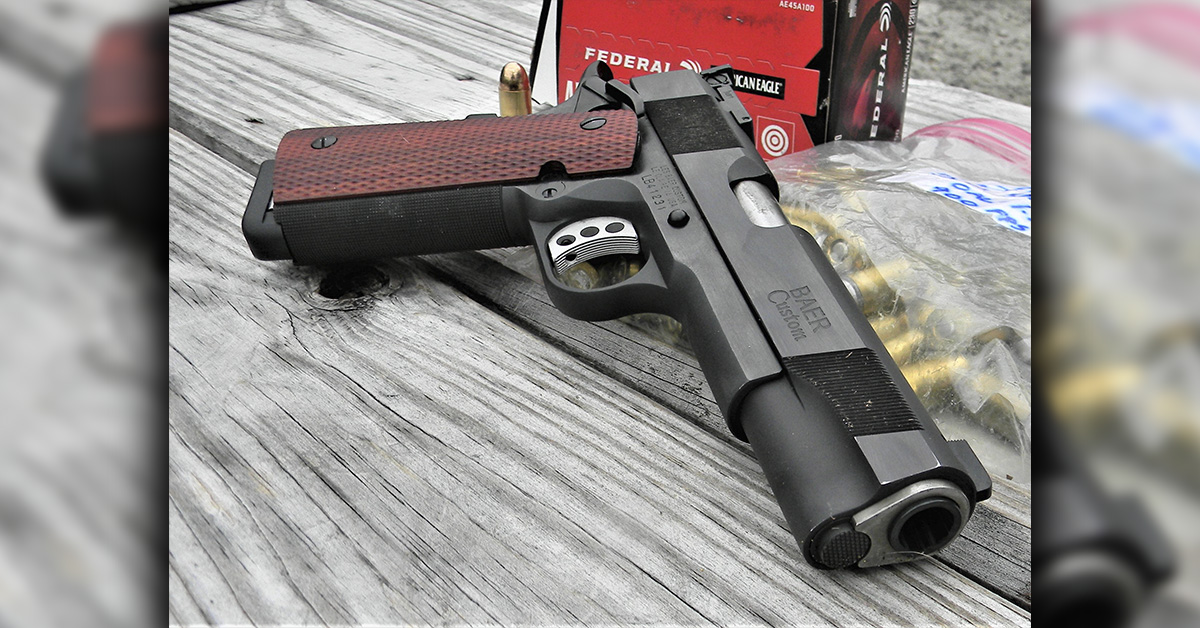