The latest 9mm in the Taurus G-series is a hybrid of sorts, blending a full-size polymer frame grip with a compact-size slide assembly

The most popular type of handgun in America is the striker-fired polymer frame high-capacity magazine 9mm. Add an aggressively stippled grip and a blade-type trigger safety and you have a recipe for success. If you can manufacture a reliable handgun with good combat accuracy at a fair price, folks will buy your pistol and many of them.

The new Taurus G3X is a pistol that is built to succeed. The frame is the full-size version adopted from the successful G3 series (although a tad shorter in length) while the slide is the compact variety found on the Taurus G3C pistol. This makes for an uncommonly good handling pistol with excellent speed and control potential. The Taurus G2 and G3 pistols have earned a reputation as handguns that are easy to shoot well, light to carry, and are affordable. 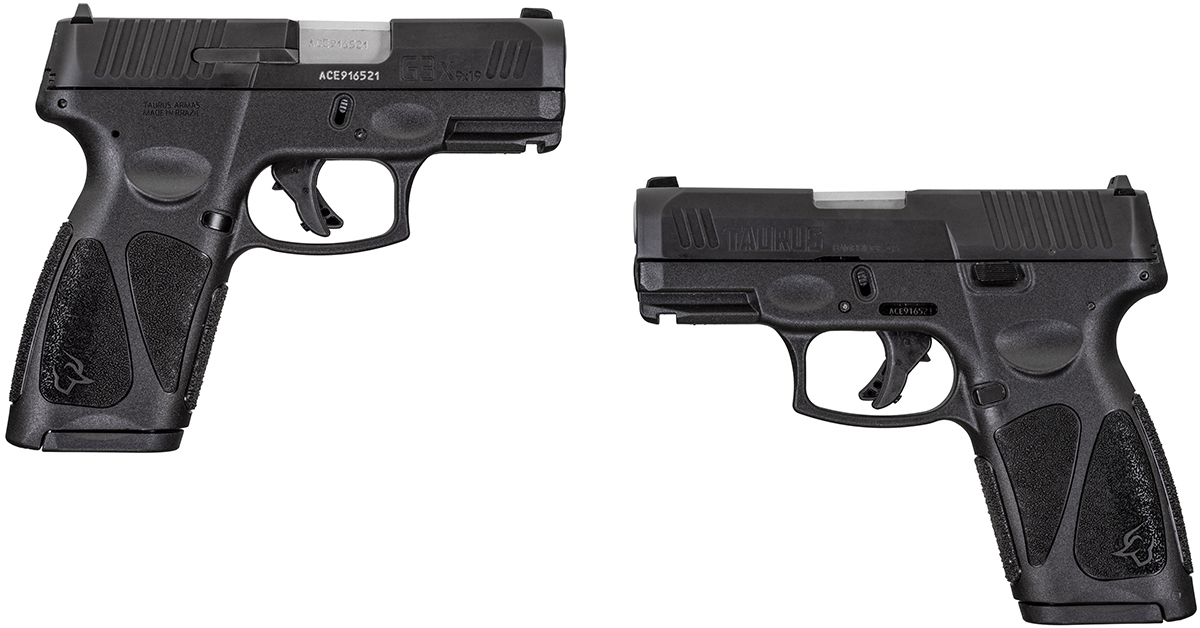 The G3X is a single-action striker-fired pistol with a blade-type safety set in the trigger. The trigger and blade safety are wider than most polymer frame striker-fired triggers. This makes for good practical safety and a nice feel. The pistol also features an internal firing pin block. This prevents the striker from releasing unless the trigger is pressed completely to the rear. In other words, the pistol is “drop safe.” The pistol features a cut out in the barrel hood that allows the shooter to visually check for a loaded chamber. 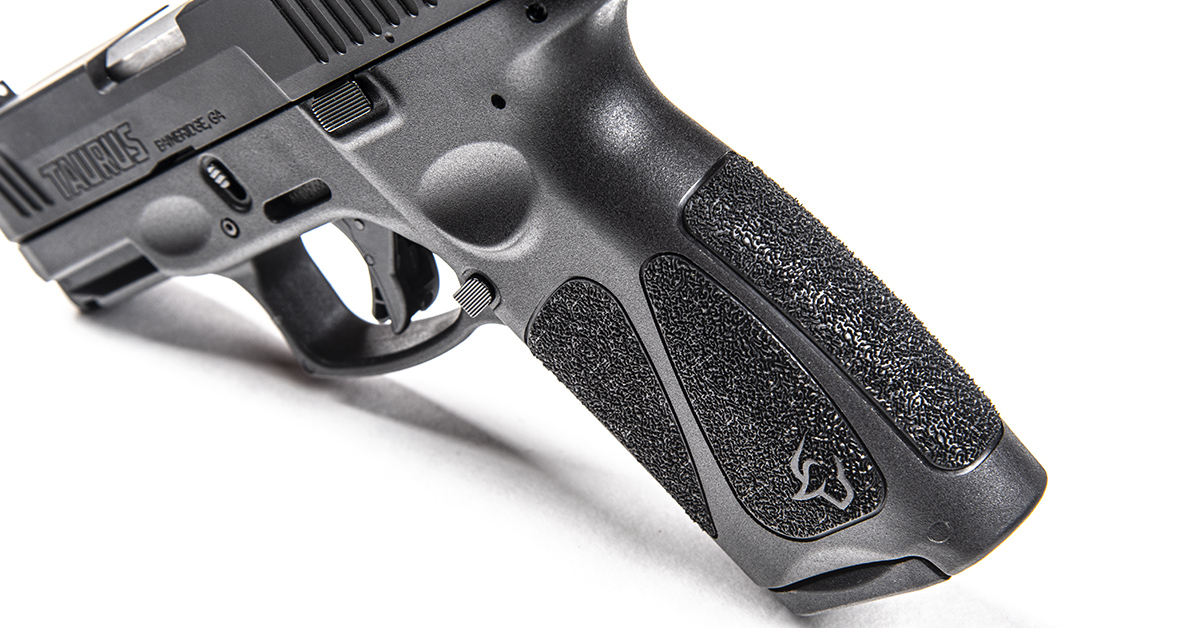 Another good feature of the pistol is the grip treatment. The adhesion is excellent. The G3X doesn’t squirm in the hand when it is fired, promoting quick sight realignment and good weapon retention. The pistol also features depressions on either side of the trigger guard that act as finger rests or, as Taurus calls them, “memory pads.”

The G3X sits lower in the hand than most polymer frame handguns. Since the trigger action is straight to the rear rather than the trigger finger being forced to sweep down and back, this low bore axis wasn’t difficult to achieve as a design feature.

The G3X has many good features, including a slide that is easily manipulated. While recoil is modest and the recoil spring more than adequate, the slide is among the easiest to actuate of any handgun this size. 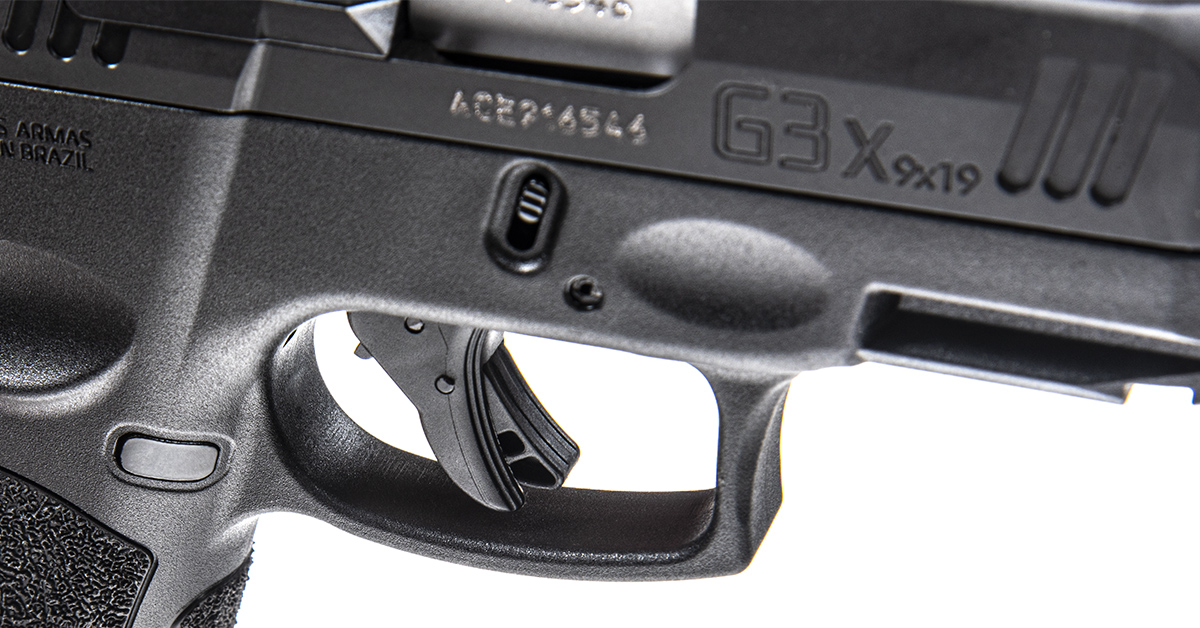 The trigger action takes some getting used to. It isn’t stiff like many striker-fired handguns I’ve shot. The action is short and tight, breaking at six pounds and one ounce in my example. And compared to most guns in this class, trigger reset is sharp, making for a pistol that works fast on hits and follow-up shots.

A feature seldom found in striker-fired pistols is restrike capability. If the cartridge fails to fire, you may reset and press the trigger again for another strike. While I would prefer to perform a quick chamber clearance drill, this system has merit. During the pandemic and panic-driven shortages, I have encountered quite a bit of ammunition of less than stellar quality, including “hard primers” that did not ignite with the first shot. Like the original Browning High Power’s heavy hammer spring that ensured a hard blow to the primer, the Taurus G3X second strike feature is insurance against off-spec ammunition.

To hold the ammo, the G3X comes with two high-quality steel magazines. These are flush-fit fifteen-round magazines. Seventeen-round extended magazines are also available. 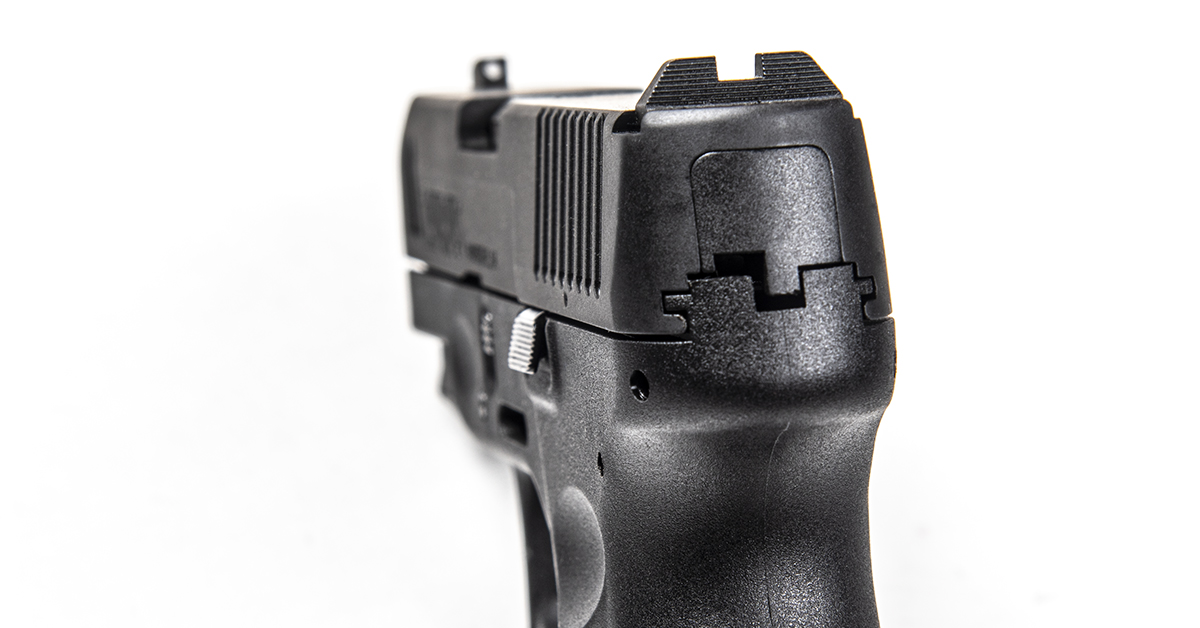 The sights are the simple post and square notch variety. These sights are low profile, well suited to a personal defense pistol and spot on for 124-grain loads at 15 yards. While the rear sight is drift adjustable, I had no cause to move it. Weight comes in at around 23 ounces—quite manageable for a carry gun. There is enough weight to absorb recoil while the pistol doesn’t become a burden on the hip.

Firing the pistol wasn’t exactly a revelation, as I have much experience with the Taurus G2 and G3 series handguns; however, the G3X treatment proved to be an ideal set up for personal defense, in my opinion. The full grip offers a good handle for accuracy and control while the short slide clears holsters quickly. I used several holsters from Crossbreed and Galco with excellent results. The G3X is light and relatively flat—an excellent combination for concealed carry. The full-size grip offers a solid purchase and is easily grasped on the draw. Draw, meet the support hand, press the handgun toward the target, line the sights up, and press the trigger. You have a hit. Repeat. This is the test of a personal defense handgun. Firing quickly and making fast repeat hits, I ate the center out of the target at 7 and 10 yards. 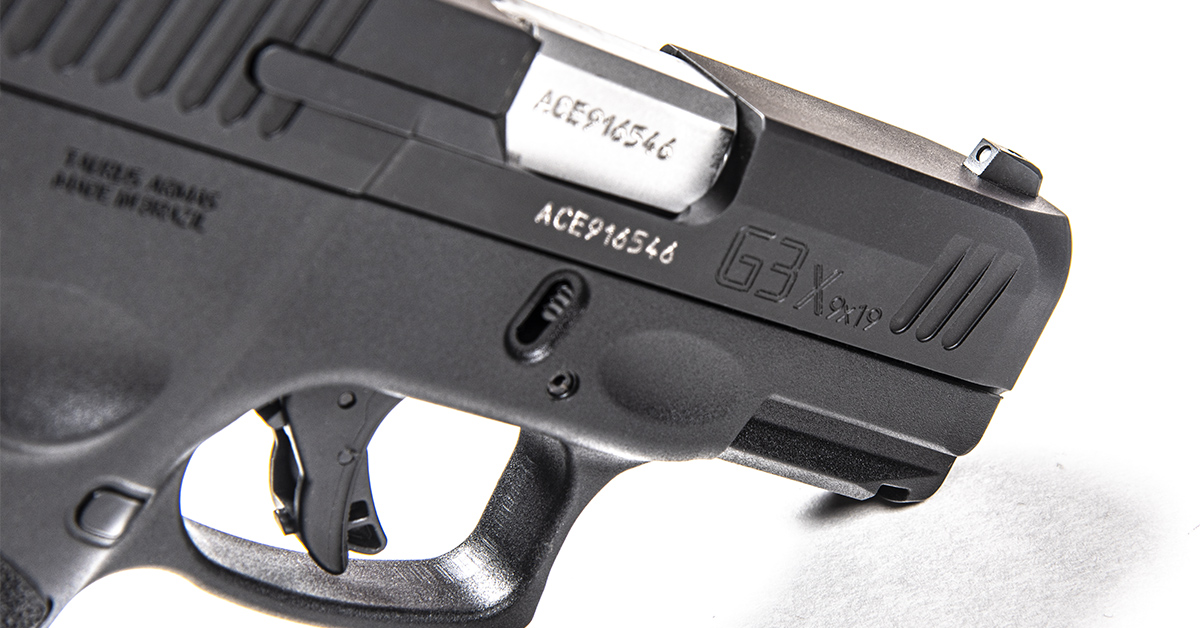 The primary load during this firing session was the Federal American Eagle 147-grain FMJ. This is a clean burning, accurate, and affordable load. I mixed in several other loads, including the Federal 124-grain HST and Federal 138-grain Synetch Defense with good results. Combat accuracy is good. Several shooters trying the G3X were favorably impressed with the pistol’s easy control and accuracy.

Shooting for accuracy is always interesting, so I set up at 15 yards, releasing five-shot groups with Federal 124-grain HST, Speer Gold Dot 124-grain, and the Federal 147-grain HST. The single best five-shot group was a 2.5 inch spread with the 147-grain load. The others averaged 2.8 inches. 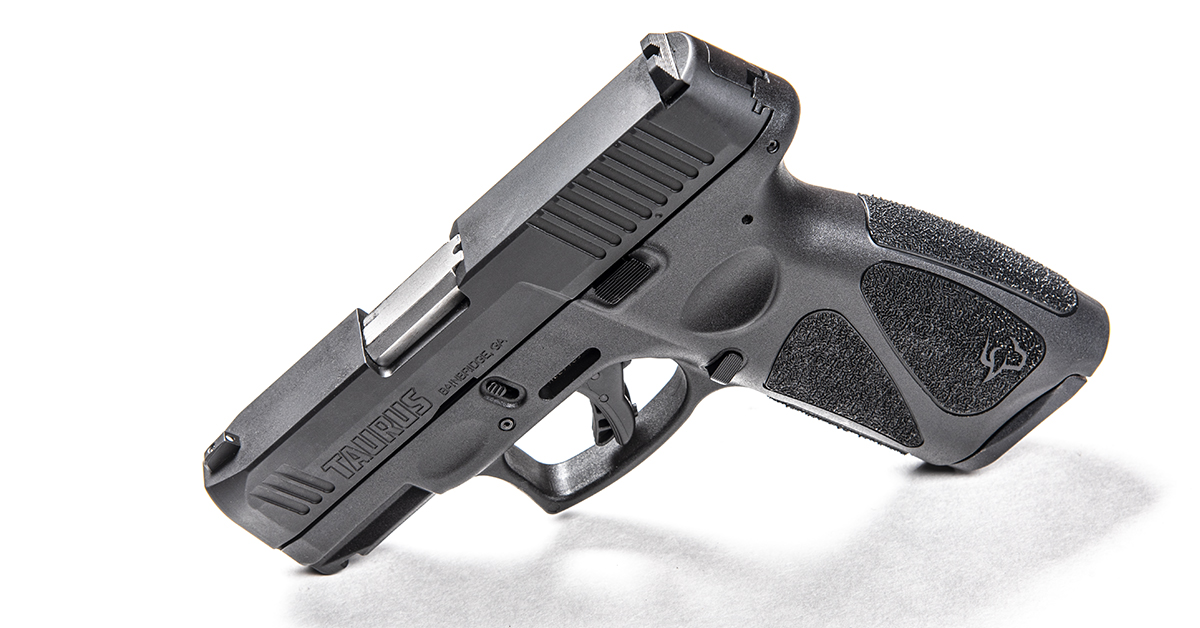 It proved to me yet again that Taurus has performance dialed-in with their G-series handguns, and the new G3X certainly continues that momentum. 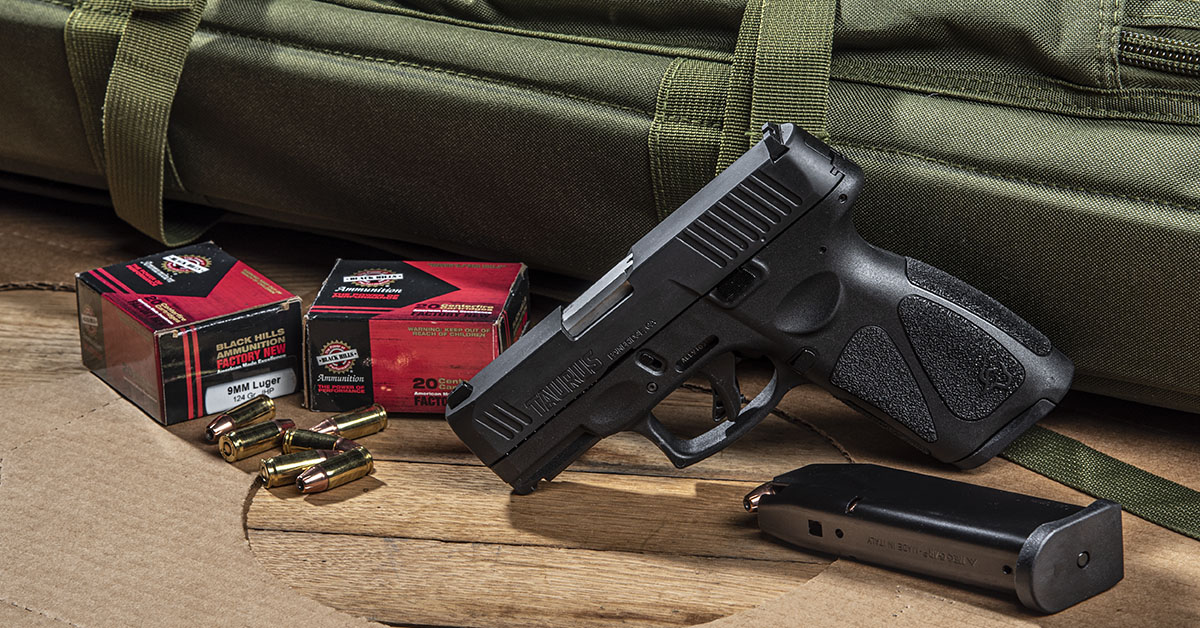