There has been a seismic shift in America’s approach to turkey hunting gear in recent years, and Rossi is taking full advantage with a “less is more” strategy

It is a common refrain among dedicated turkey hunters. Sometimes, you must get to that tom lickity-split or your morning may be a total bust. Fast-stepping up steep hills, through tangled brush, over creek bottoms…whatever it takes to get within enticeable earshot is essential. It is called run-and-gun, for those new to turkey hunting, and if you spend enough time pursuing longbeards, you are going to learn the art of run-and-gun one way or another.

Actually, this is part of what makes turkey hunting the highlight of the yearly hunting seasons for many folks, yours truly included. While bowhunting for whitetails is my lifelong passion, I look to the arrival of spring gobbler season like most kids anticipate Christmas morning. Compared to deer hunting, turkey hunting often keeps you on a near-constant move as you pursue amped-up toms that may be a ridge away or two or three hollers over. The action can be fast, chess-level strategy is part of the game, and the adrenaline rush of a gobbler coming in closer and closer to your call can cause even veteran turkey hunters to practically come unglued.

Put simply, there is nothing else like it in the hunting world. Run-and-gun means you better keep your gear to a minimum and be ready to reach out there with a tight shot group because easy sits and perfectly laid plans of getting a gobbler to come in at shoot-in-the-face distance is never guaranteed. 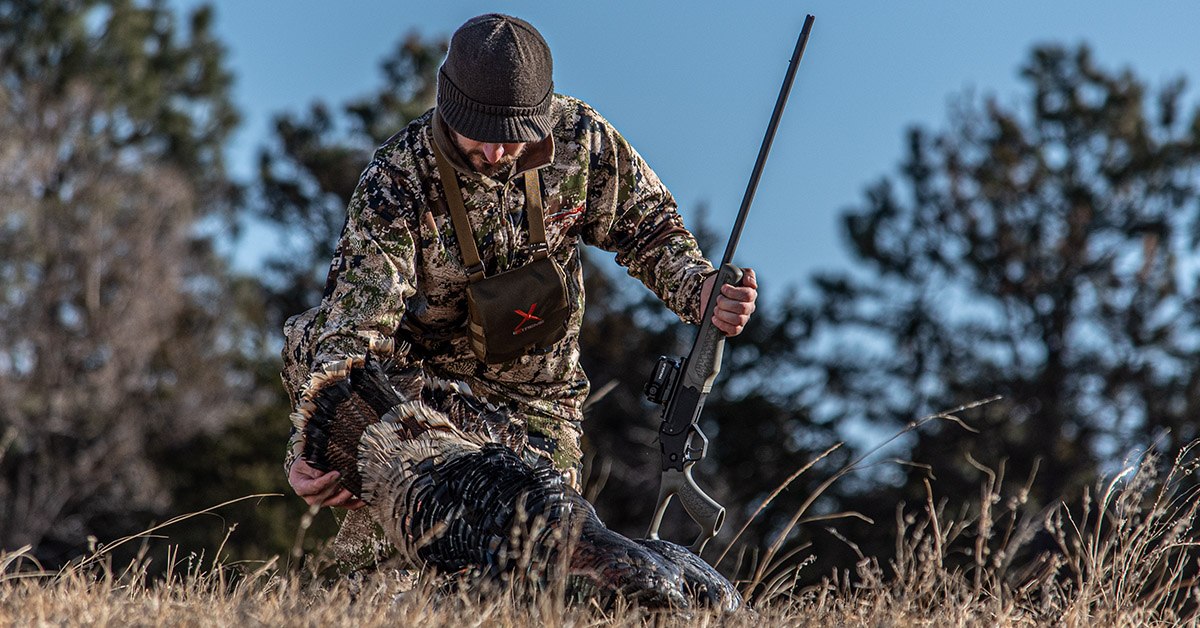 The same is true when hunting fall turkey—perhaps more so since there are few “drawing in” strategies to employ. Shot opportunities happen when they happen, and you simply must be ready to take full advantage of your gear.

Being able to take those longer, ad hoc shots at turkey with confidence and devastating results is partly what is behind the .410 tungsten shot movement that has been gaining ground among turkey hunters of all stripes over the last few years. If this is unfamiliar territory for you, here is the synopsis.

Compared to lead, tungsten is incredibly denser. That added weight ratio means more energy is packed into a smaller package. Rather than utilize larger #4, #5, or #6 lead with fewer pellets or painful magnum loads to reach way out there, tungsten delivers similar long-range performance with smaller, higher count pellets of equitable downrange energy and shot density. What is more, that exceptional performance can be delivered with .410 bore shotguns, which are lighter to carry and certainly easier on the shoulder than, say, a conventional 3.5-inch 12-gauge turkey load. 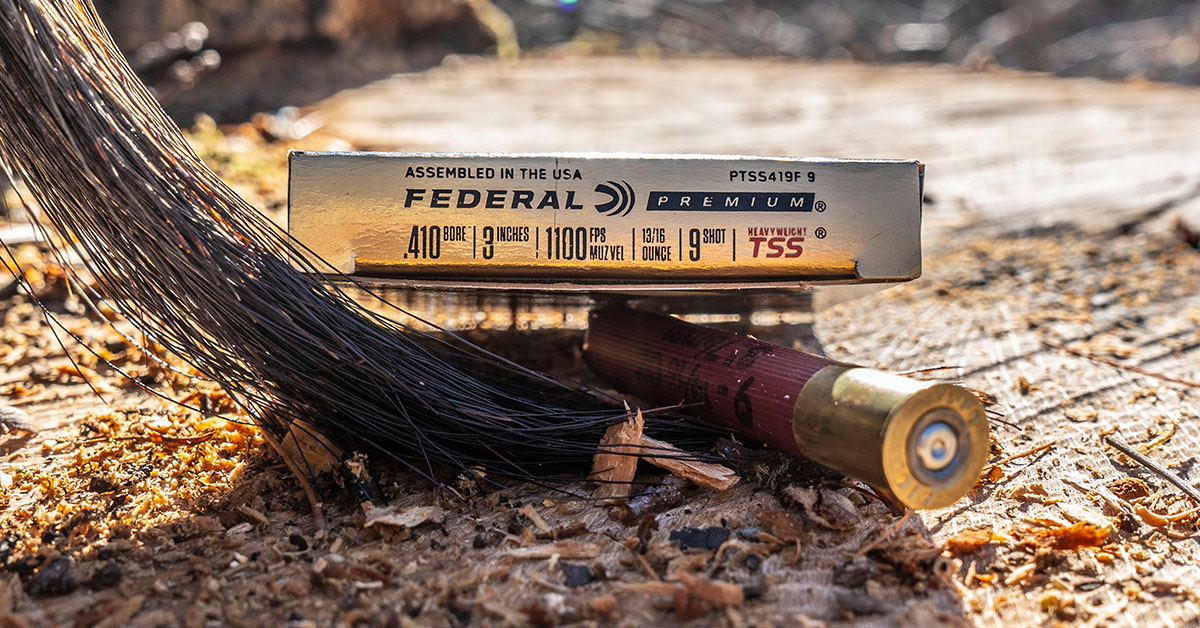 All of this has led to a renaissance of .410 bore shotguns in recent years as firearm manufacturers revitalized their platforms to accommodate turkey hunters keen on employing these lighter weight scattershooters for run-and-gun operations. The latest example of the breed is the new Tuffy Turkey from the good folks at Rossi USA.

The Tuffy Turkey is based on Rossi’s single-shot Tuffy .410 introduced in 2019. Originally developed as a value-priced, entry level shotgun for youth shooters, the Tuffy series shotguns quickly gained the attention of adult hunters for its ergonomic stock platform, integrated shotshell holders, and low “just-for-fun” price tag. This year, Rossi takes the Tuffy line into an entirely new realm.

First, all Tuffy shotguns benefit from an updated receiver. By updated, we really mean “all new.” The original steel receiver has been ditched in favor of a polymer unit. Rossi engineers have taken advantage of advanced polymer materials and more efficient and modern manufacturing processes to make a polymer receiver with a steel frame structure that not only performs its mission at a lighter weight but also mitigates environmental impacts like rust and corrosion. 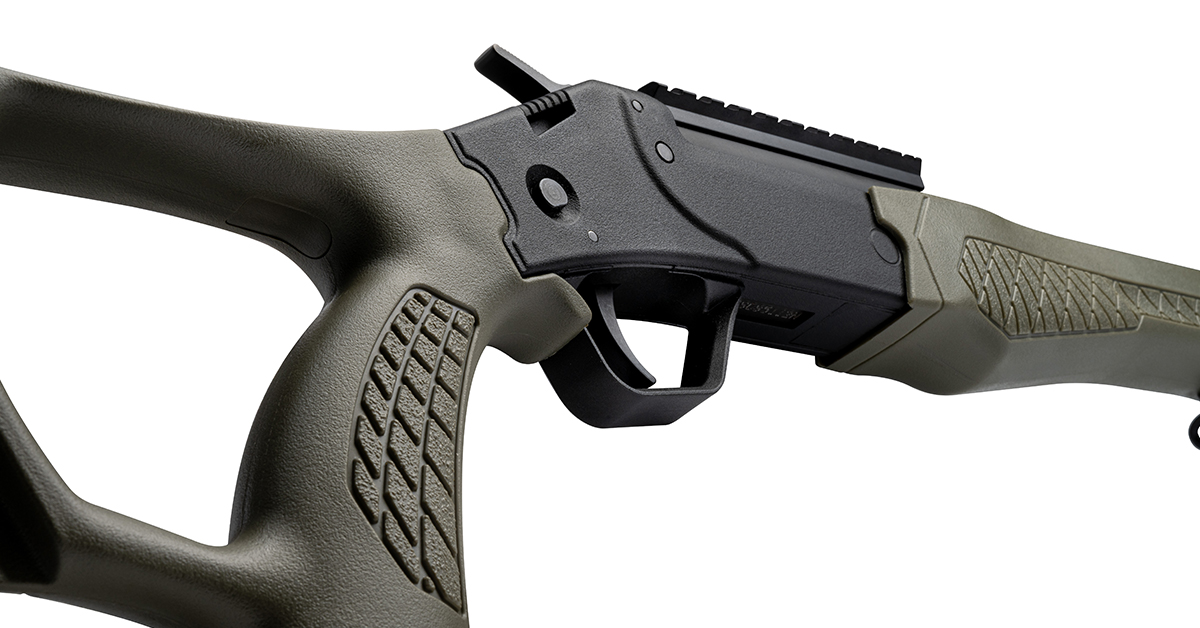 Second, the Tuffy line has been expanded to include a turkey-specific model that brings together all the attributes the run-and-gun hunter desires in a .410 destined to push tungsten shot downrange with authority.

Several features are included with the new Tuffy Turkey that separate it from the mainline Tuffy shotgun offerings. Foremost is the 26-inch barrel versus the standard 18.5-inch variety. Added to the extended barrel length are two included chokes—an extra full and a modified—allowing you to fine-tune your cartridge’s shot pattern for your preferred style of shooting or hunting conditions. 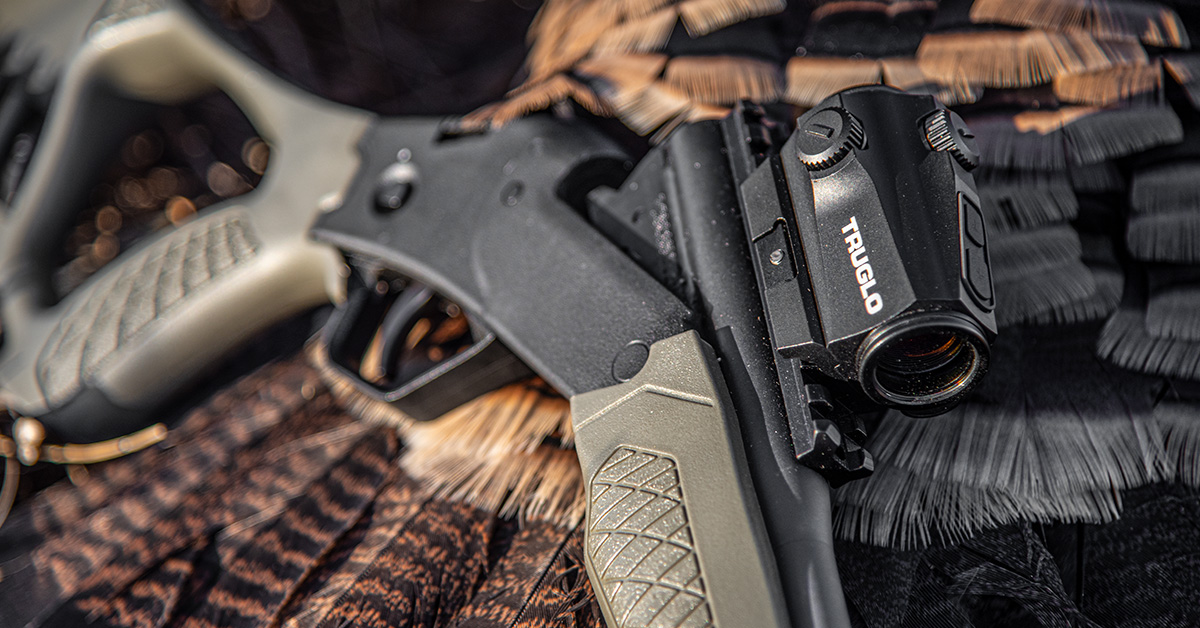 Because of tungsten shot’s proclivity to hold tight patterns at incredible distances, precision aiming is a must. Forget the single-bead front sight. Red dot optics are where it is at. To accommodate, the Tuffy Turkey includes a hard anodized aluminum Picatinny rail mount, allowing you to use any red dot that is compatible with a Picatinny mount.

The other key variation between the standard Tuffy models and the Tuffy Turkey is the adjustable buttstock. The Tuffy Turkey comes with a removable spacer that allows the length-of-pull to be shortened to accommodate youths or shooters of a smaller stature. 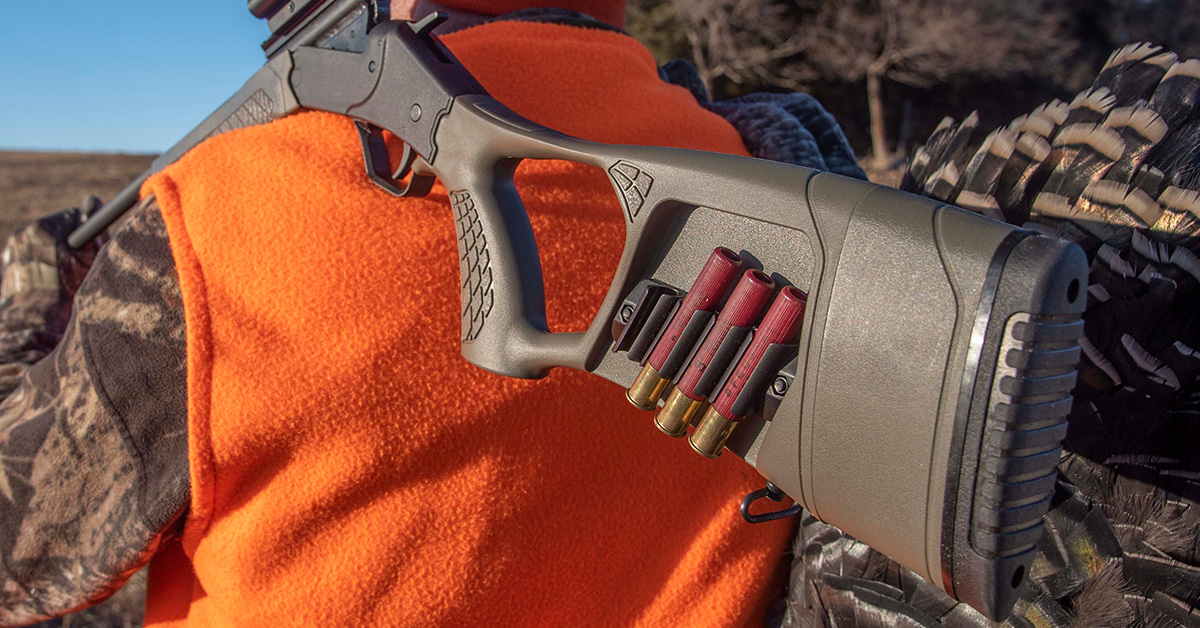 This past fall, I had an advance test drive of the new Tuffy Turkey, deploying this light and nimble platform on several feathered species. My first outing with the Tuffy Turkey was an evening turkey hunt. We had seen a small flock of birds moving predictably between their daytime feeding haunts and their roost amongst a couple long rows of mixed hardwood and cedars. The trick was for my hunting partner and me to space ourselves along a 70-yard-wide cut separating the tree rows and hope to be in striking distance when the birds moved through to their roost.

It turned out to be a bit of a ping pong match. The turkeys came through, as predicted, but were out of reach. My partner decided to loop around to the end of the tree row and push them back my way.

After a 10- or 15-minute wait, I was about to give up hope when the flock started to squirt out of the trees behind me and sprint across the cut. At 50-something yards, they were well within my comfort zone for the Tuffy Turkey and Federal TSS load but were moving too tight and fast for me to take an ethical shot. I watched in dismay as the group disappeared into the safety of the opposite thicket. Lowering the shotgun, I felt the adrenaline slowly ebb as the sun began to drop with a rich, orange glow along the western horizon.

Then I heard an ever-so-slight “cluck” to my left. The game was afoot once again!

The tail gunner hen popped out of the brush, pushed under the barbed-wire fence and walked into the cut at only a slightly slower pace than its predecessors. I estimated the range at about 50 to 55 yards while simultaneously cocking the hammer on the Tuffy Turkey and placing the red dot just below the turkey’s head. The shotgun barked and the bird dropped in its tracks. 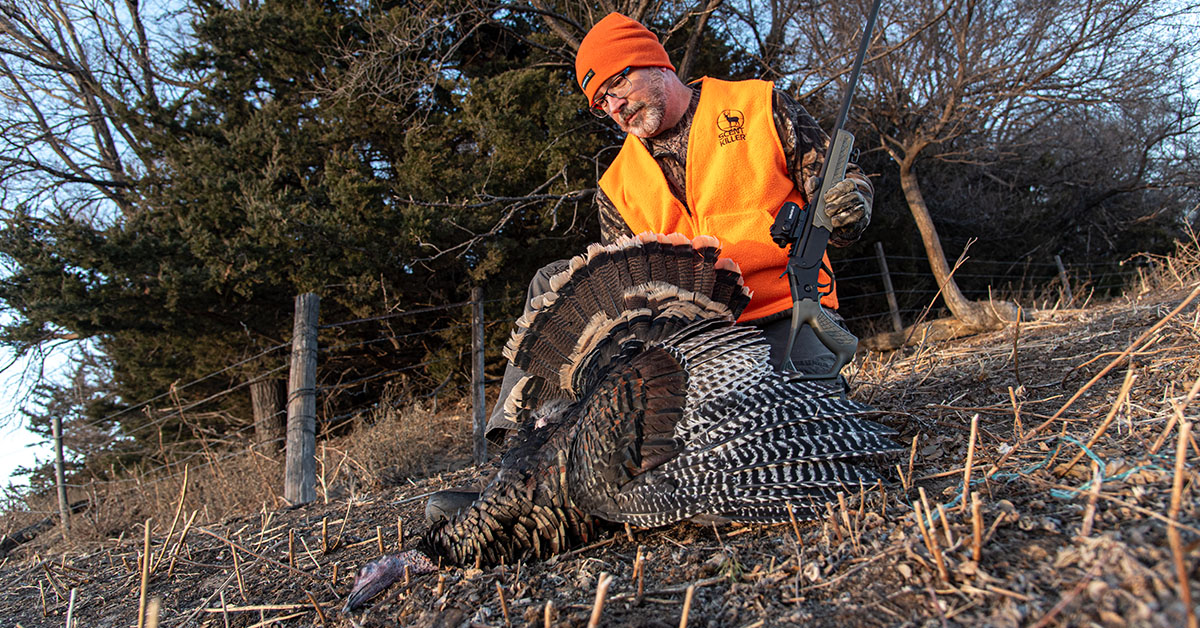 The combination of the agile shotgun, quick sight acquisition of the red dot, and lethal performance of the Federal TSS was impressive. I have pursued turkeys with big pump 12-gauges for years, but this ultralight, sleek-swinging package put a new perspective on what a run-and-gun turkey hammer could be.

With a turkey tag filled, I pondered what other adventure could be cooked up with the Tuffy Turkey.

The next morning, we decided to kick some stubble and try for a ringneck pheasant. A grassy fence row near camp provided the venue. With me on one side and my partner on the other, we planned to jump a couple of birds we had seen moving in and out of the grass. We had almost reached a creek intersecting the fence row when a bird shot up in front of me at about 45 yards distance. He was 15 feet off the ground by the time I got the hammer back and the red dot on him. A pull of the trigger and the deed was done.

With a turkey and a pheasant in the bag, we decided to see just how far we could go with this new Rossi .410 and Federal TSS. Since the crows were dotting the sky and landscape everywhere we went and my buddy kept talking about how fun and challenging it is to hunt crows, I decided to take the bait. After a couple unsuccessful stalks, we came across a crow sitting on a fence post about 100 yards off. A slight rise in the terrain could put me within 60 yards or so if I could manage to crawl the first 40 yards. 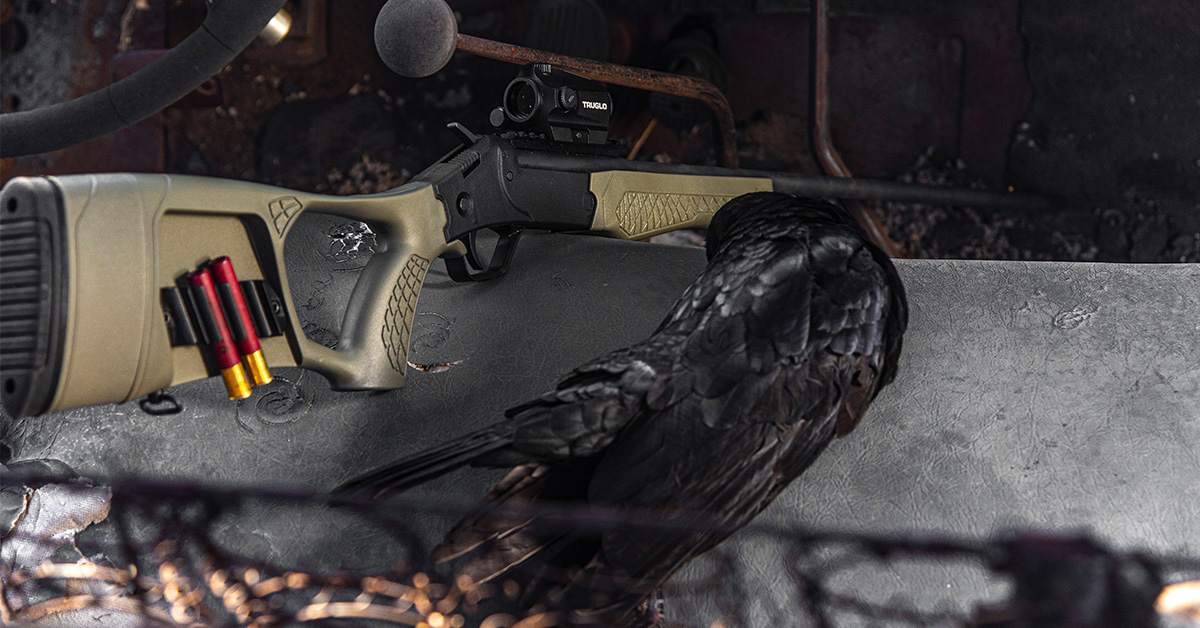 Because the Tuffy Turkey is so light, crawling on hands knees while gripping the gun one-handed proved easy. I elbow-crawled the last 10 yards with the shotgun cradled in both arms and was able to take a successful 55-yard shot. Yea, with TSS costing about $8 a pop, that is some expensive crow hunting, but it was darn fun, and I can see why some hunters are absolutely jazzed about pursuing these scavengers…especially during the off-season.

Swinging that episode back to practical turkey hunting applications, the Tuffy Turkey is not only your friend when you need to hightail it over hill and dale to get on a gobbling tom, it also offers a tremendous advantage over traditional shotgun platforms should you need to put the belly sneak on a big bird. If you have been hunting turkeys for some time, that is a benefit you can certainly appreciate. You will also appreciate the price. With an MSRP of $220.97, the Tuffy Turkey is a proven performer that delivers on many fronts. 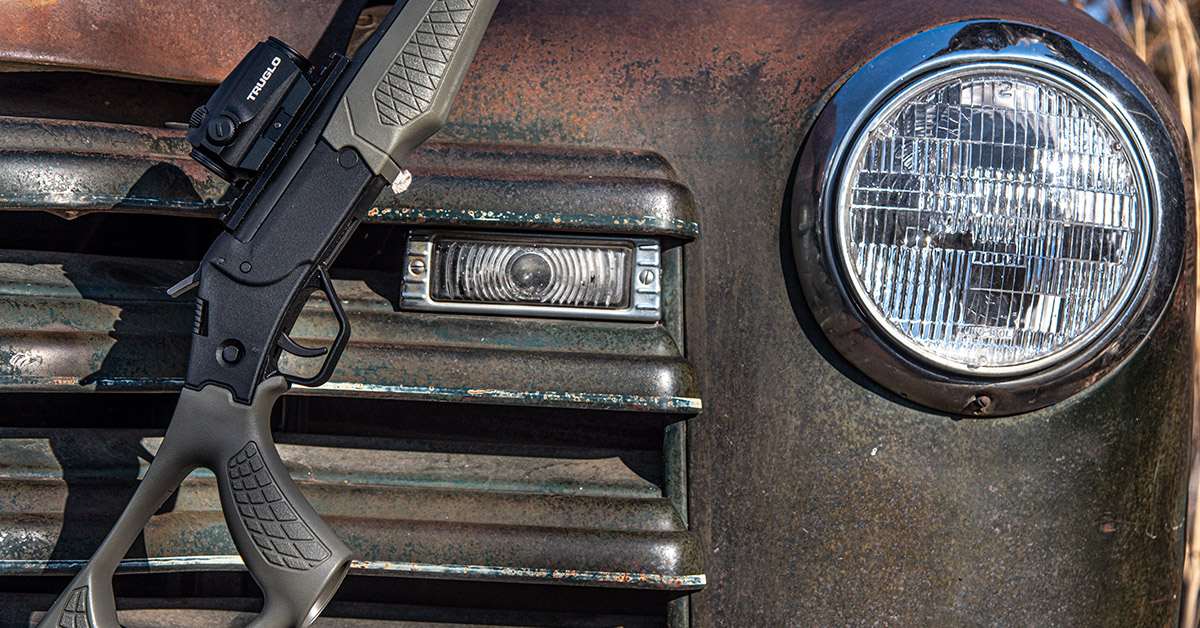