From truck gun to home defense to small-game and varmint action, Henry’s lever-action shotgun has you covered

The whole thing started in 1885. The story goes that Winchester encouraged the esteemed gun inventor, John Moses Browning, to produce a repeater shotgun with a lever action. Shotgun history lore tells us that Browning didn’t want to do the lever action route; he wanted to design a pump gun. Winchester, we are told, held fast to the lever action design as that was what his company was famous for in their classic lever rifles. John Browning obeyed and the Winchester 1887 lever action shotgun was born.

Prior to the Winchester 1887, double barrel shotguns were the only choice, so Browning’s brainchild was the cat’s meow for a while. This new lever action had 5+1 loading capability but was not the easiest to load. Having no side gate, the shooter had to open the rolling block action and load through the receiver. The shotgun had a curiously small hammer that made it sometimes hard to grasp and cock the gun. The 1887, followed by the 1901 model, held on for a while but was replaced when Browning got his way and Winchester introduced the model 1897 pump gun. 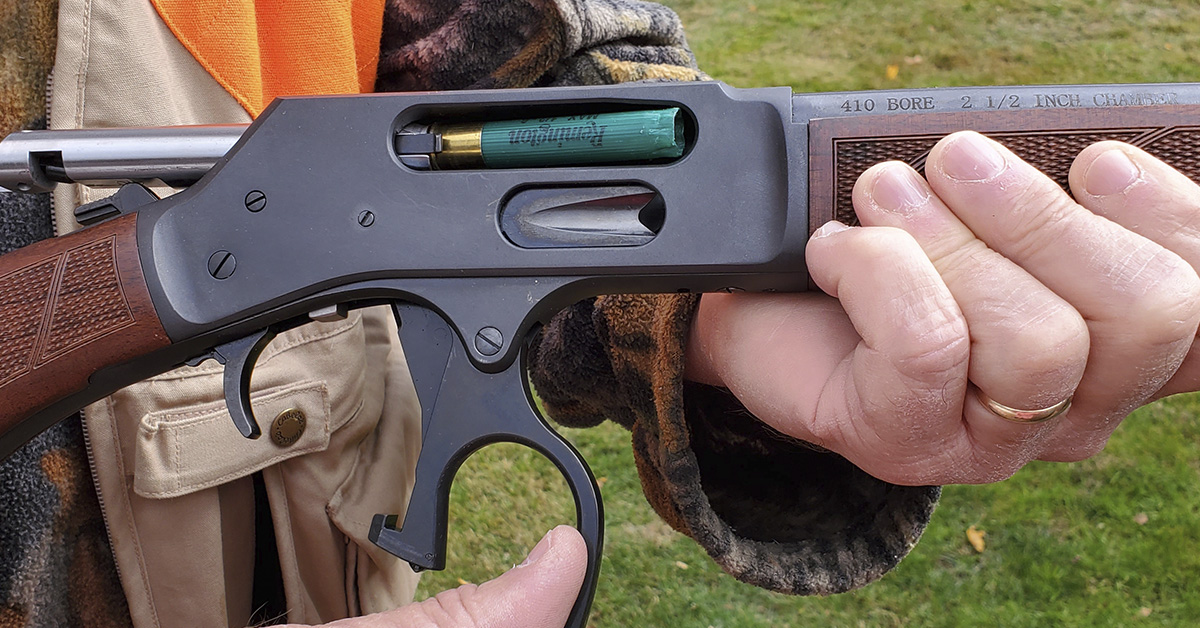 The .410, somewhat like the lever action shotgun, was a sleeper for many years but has come back into the limelight of late. Not only a popular choice for young shooters, the sub-gauges like the .410 have gained popularity with adult shooters who may just be tired of getting hammered by magnum 12-gauge loads.

Interested? Look no further than the Lever Action .410 Shotgun Side Gate from Henry.

The Henry Lever Action .410 Shotgun Side Gate is a substantial piece of machinery. This is not a toy or what some people might think of as just a “kid’s gun.” While the lever action shotgun may be thought of as something of a novelty, this shotgun falls into the category of a very serviceable gun for hunting, self-defense, and dealing with home and garden pests. It is definitely in the realm of a “truck gun.” More on this later.

Two versions are offered, the full-length and the compact. The longer H018G-410 comes with a blued 24-inch round barrel that’s factory-threaded for Invector-style chokes. A full choke tube is supplied, and additional options are available from the Henry store, including a Turkey TSS choke. The high-visibility front brass bead will serve for wing-shooting clays or birds alike. The long barrel makes for a slightly milder report and stretches the effectiveness of .410 shotshells to the max.

Henry .410 lever action shotguns now feature side loading gates for topping off the magazine while in action. The six-shot tube magazines can also be loaded through the front of the tube and unloaded rapidly without having to cycle shotshells through the action. If hunting would be the primary job for this shotgun, I would be buying this model with the longer barrel and the screw in chokes. 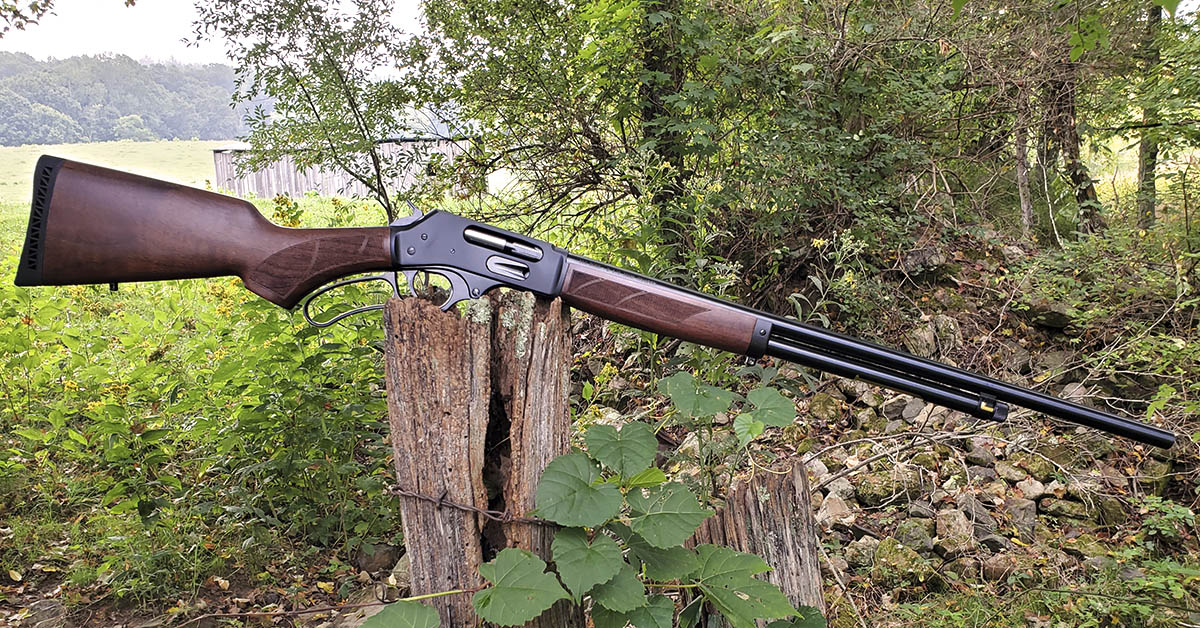 The H018G-410R model is a more compact configuration with a 20-inch  cylinder bore barrel—good for brush hunting with birdshot, defense with buckshot, or deer hunting with slugs. The semi-buckhorn rear sight, adjustable for windage and elevation, combined with a brass bead front post sight, makes for very accurate shooting. A little lighter than its 24-inch counterpart, this shotgun is easier to carry in the field or to handle in tight quarters. The adjustable sights allow for patterning of any shot load and point-of-impact for slugs. This firearm lets you handle small game like rabbits or birds for the pot, and varmints like fox, coyotes, and pest rodents at moderate ranges. If knew I was going to shoot a lot of slugs, I would be choosing this shorter barreled model with the adjustable sights.

The Henry Lever Action shotgun was fired extensively on the range and in the field. The first thing I needed to establish for my own peace of mind was that the firearm would go bang every time I pulled the trigger (Case’s Firearm Theorem #2) and would cycle the rounds effectively, as in ejecting spent hulls and loading the next shell. 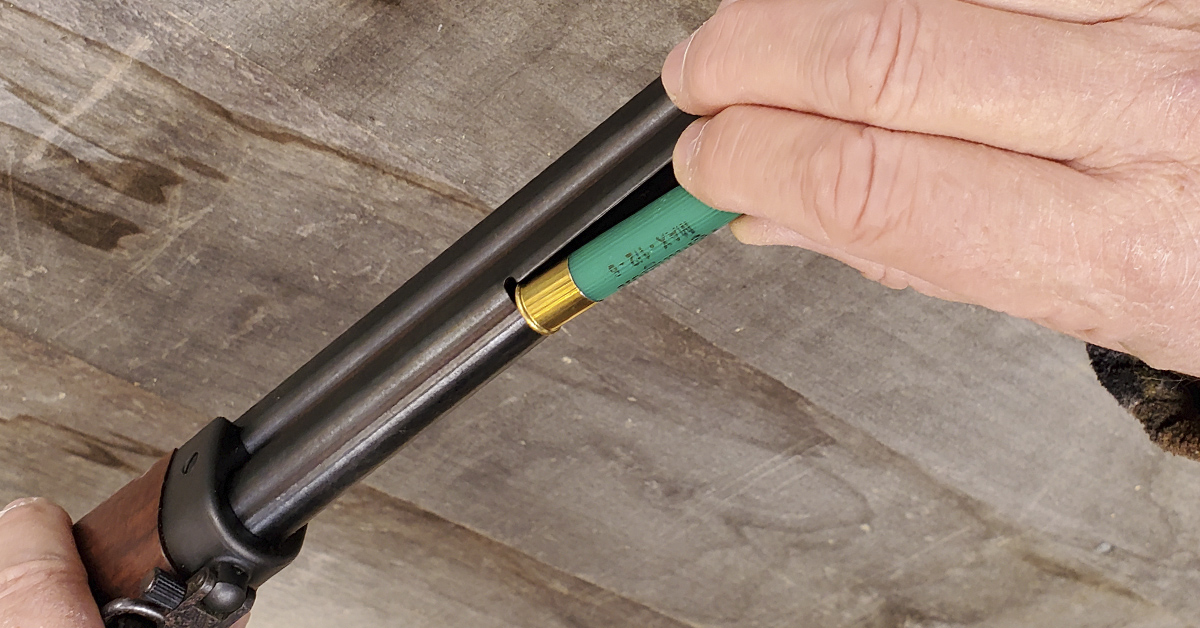 Shotgun shells tend to load, feed, and otherwise function in a firearm’s action different than rifle cartridges. Rifle rounds are all metallic, usually more pointed than blunt, and are smoother than shotshells so they typically ride through a gun’s action effortlessly. Shotgun shells are often thicker (even .410), are blunt on the end, and though we don’t deal in paper shells now, today’s plastic shotshells will drag in a gun’s action more so than a smooth metallic cartridge. 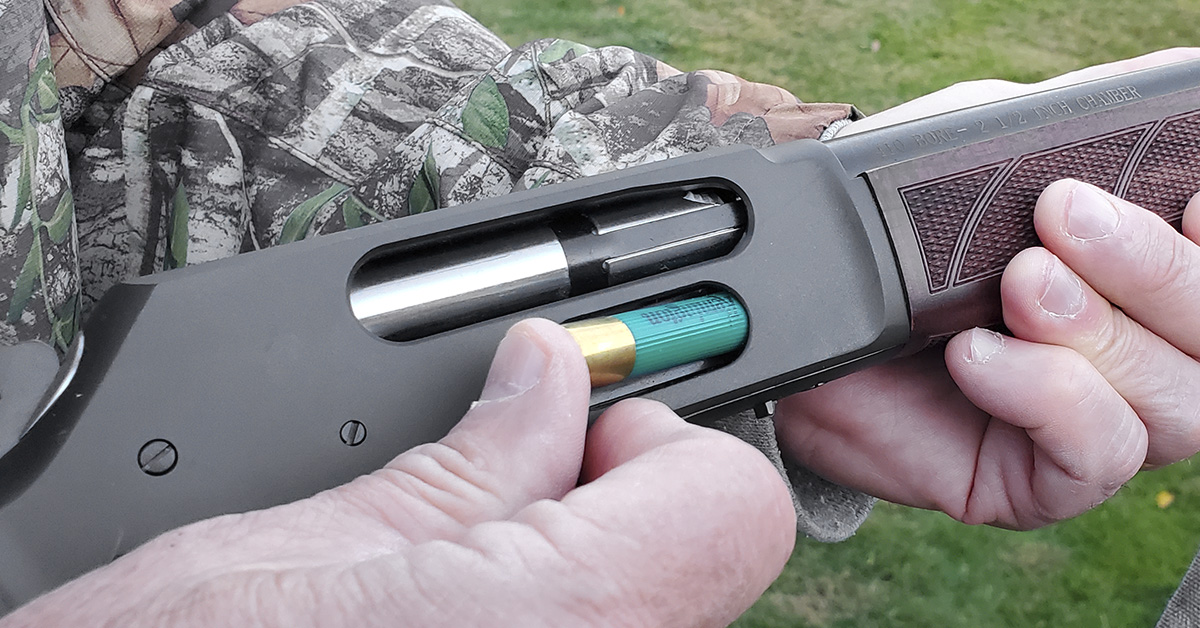 For all these reasons, I was curious as to how the Henry Lever Action would function and I was not disappointed. Several rounds of fully loading (5+1) and firing the gun had no glitches, and the little .410 fed and ate the Remington and Winchester loads with no problems. I was also pleasantly surprised on the patterning board. Even though 2 ½-inch .410 loads only hold about 112 #6 shot pellets, on turkey patterning targets at thirty yards, the Henry delivered what I thought were respectable patterns. I would have no problem drawing down on a big gobbler at that range. A couple of trips to the squirrel woods produced good results as well, with the Henry and the 2 ½-inch loads knocking squirrels out of some tall oak trees. 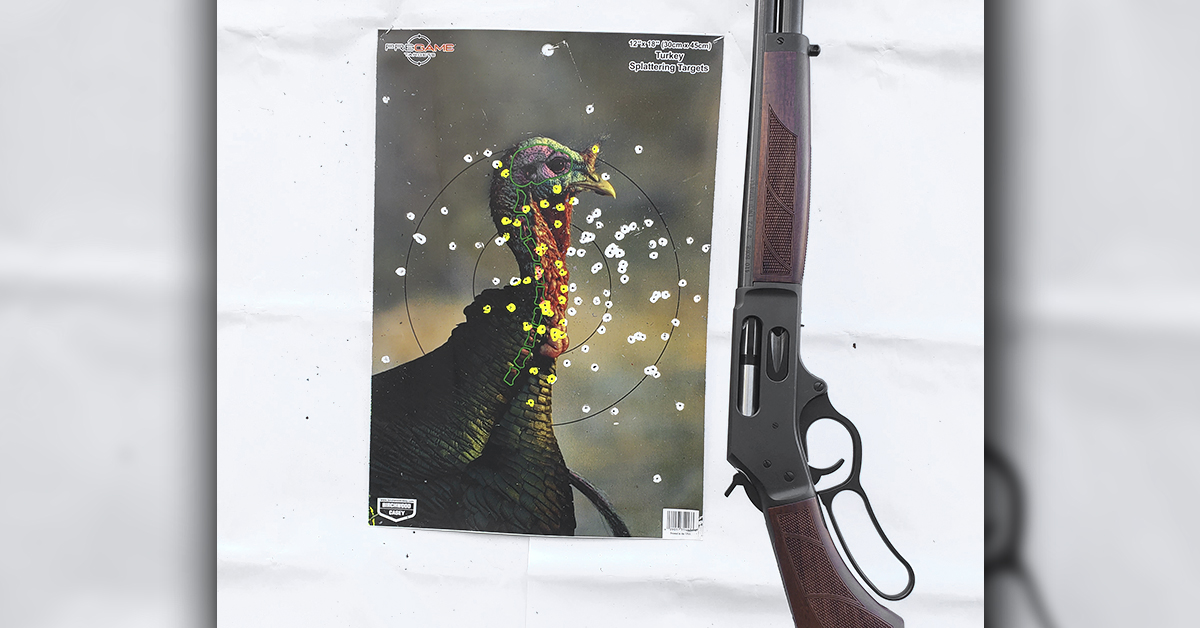 There has been much talk in recent years of what exactly makes a “truck gun.” In my not so humble opinion, a truck gun is one you would carry in the truck most of the time and can be applied to many different jobs for a firearm. In some locales, it may be getting less popular to talk about shooting snakes, but that would be one job for the truck gun, along with eradicating garden pests like crows, woodchucks, rats, and maybe starlings. The Henry Lever Action will also serve as a home defense weapon and can be loaded with a variety of ammo such as birdshot, .410 slugs, or designated home defense loads like the Winchester PDX1 .410 Defender load. This shell fires four plated defense discs and 16 plated BB sized pellets—devasting to any intruder at close home defense ranges.

The Henry Lever Action comes drilled and tapped to accept a Weaver 63B-style scope base. 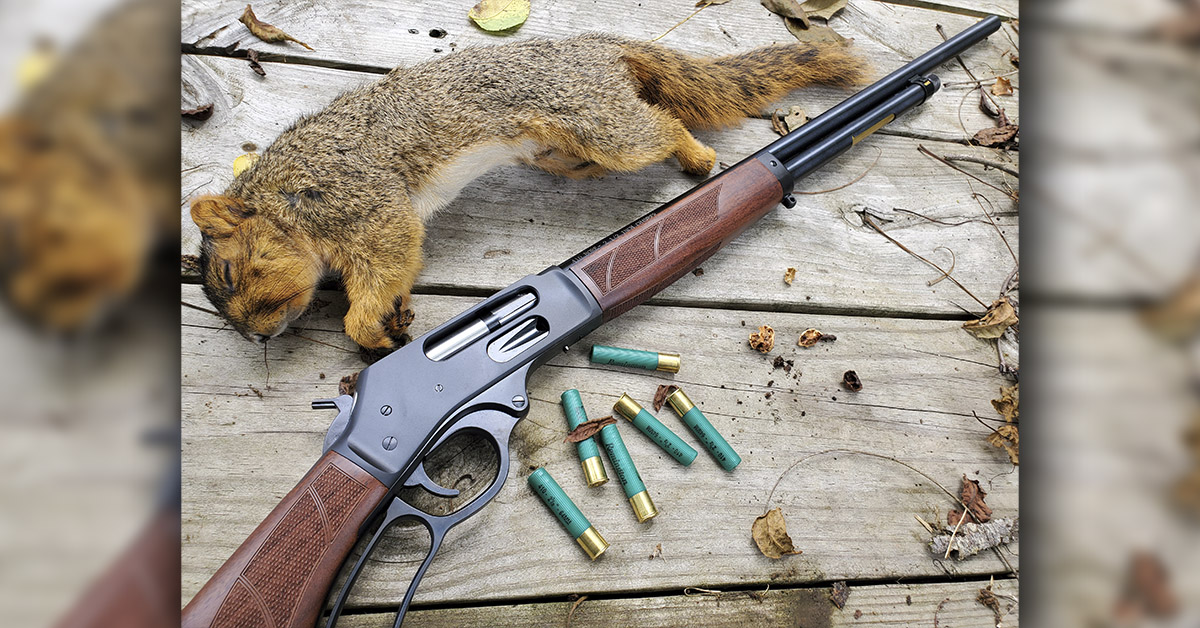 The Henry Lever Action .410 Shotgun Side Gate is a handsome, well-put-together firearm that functioned with no problems on the range and in the field. It can have more than one primary mission as it serves as a hunting shotgun for small game, an all-purpose “truck gun,” and it would be effective for home defense.

The Winchester 9410 lever action .410 has been out of production for some years but still can be found in the used gun department. Marlin also produced a version of its model 1895 in a .410 shotgun before the bankruptcy and subsequent purchase by Ruger firearms. It is unclear at this time if Ruger will be including a lever .410 shotgun in its production. The older models of the 1895 .410 can be found in the used market. 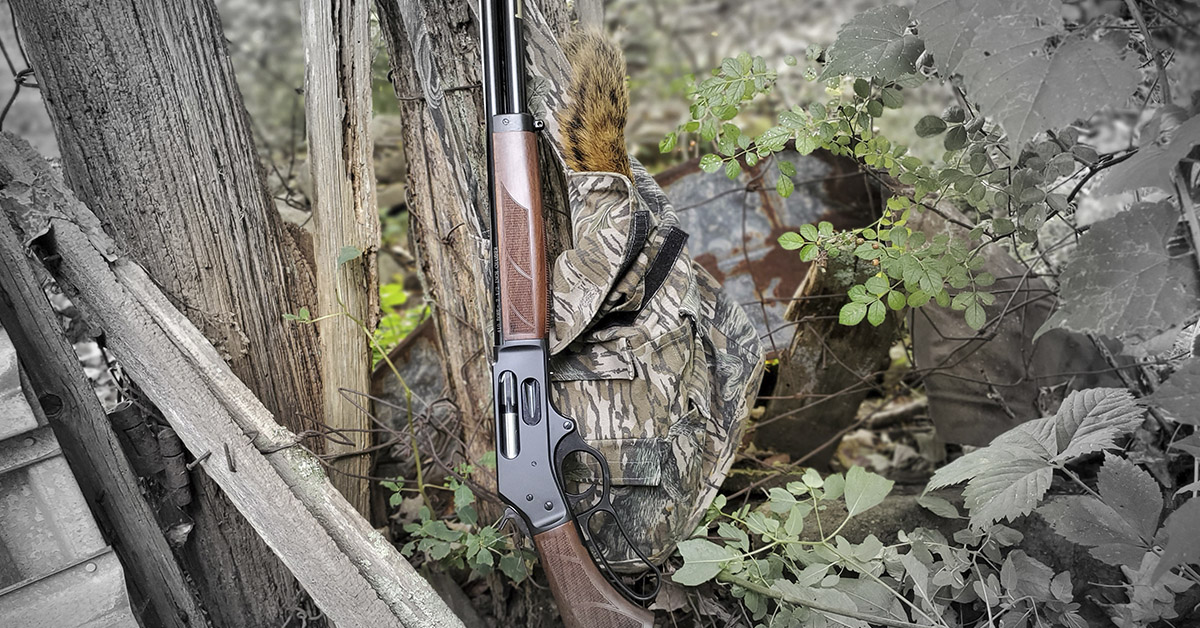