Just when you thought the venerable 00 buckshot was old school, Federal Premium breaks new ground with this field-proven defensive load

With a renewed focus on practical personal defense platforms over the last year, we at Shoot On have been reevaluating the shotgun’s place in our go-to, stand-in-the-corner arsenal. Quite frankly, a lot of contemplating, experimenting, and testing has elevated the scattergun to the top of our home defense list. For ease of operation and reliable terminal performance in the close-quarter environments in our homes and on our surrounding property, the shotgun makes the most sense, in our minds.

This has also led us to much experimentation with different loads and projectile combinations—especially given the challenge of finding ammo on the store shelves. Go here to see our recent evaluation of bird shot, buckshot, and slugs for personal defense situations. We’ll be taking another dive into this realm with some custom, non-standard shotshell loads in the coming months, so stay tuned.

The folks at Federal Premium have also been pondering the possibilities of what shotgun ammo can be—particularly the 00 buck loads. This has been the bedrock load for defensive and some hunting applications for decades because it delivers the right all-purpose balance between energy transfer, wound channeling, and point-and-shoot accuracy from all manner of shotguns.

Last year, the Federal engineers decided to take a fresh look at the 00 buck round and see what might be done to make a good thing just a bit better. The result is the Force X2 #00 defense cartridge—an unconventional take on the king of defensive shotshells. 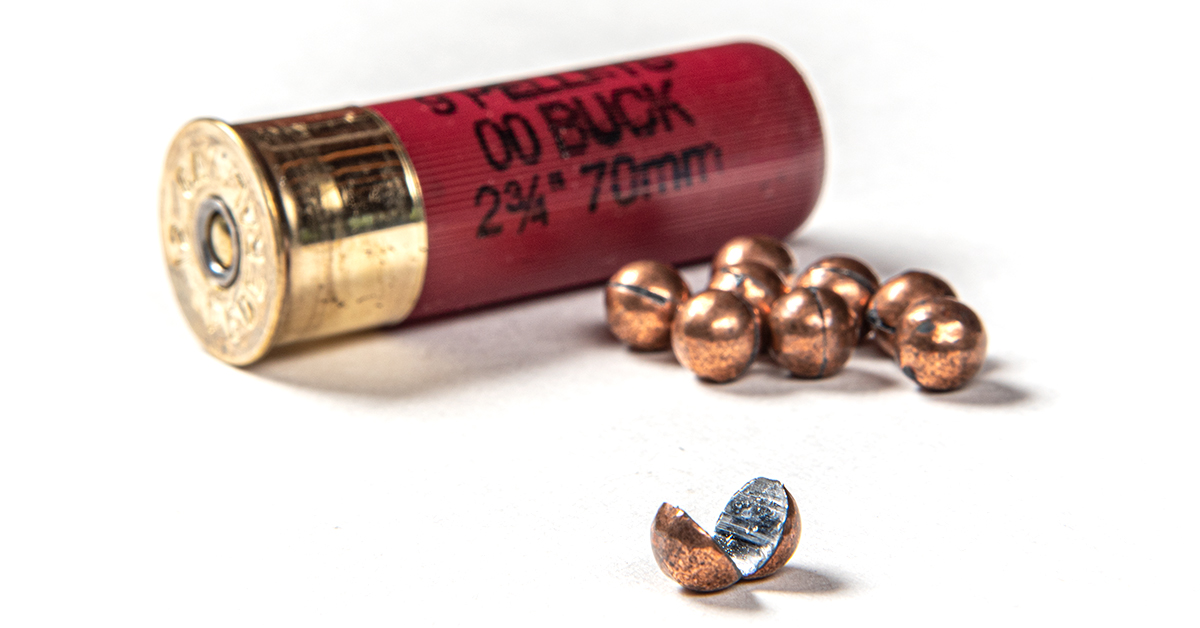 Before you ask, no, we didn’t cut that copper-clad #00 pellet to see what was inside; we merely spread it open along the existing factory split. It is this split pellet construction that distinguishes the Force X2 from standard buckshot.

“Federal’s splitting buckshot is the first significant change to buckshot ammo in over a century,” said Compton. “Force X2 was developed by Federal’s expert team of engineers who solved a problem their customers didn’t necessarily know they had. The result is a new buckshot product that delivers better terminal performance with less risk of over-penetration, making it safer to shoot in defensive situations. This is the same mentality Federal engineers use when developing handgun loads to meet FBI protocols for law enforcement and personal defense situations.” 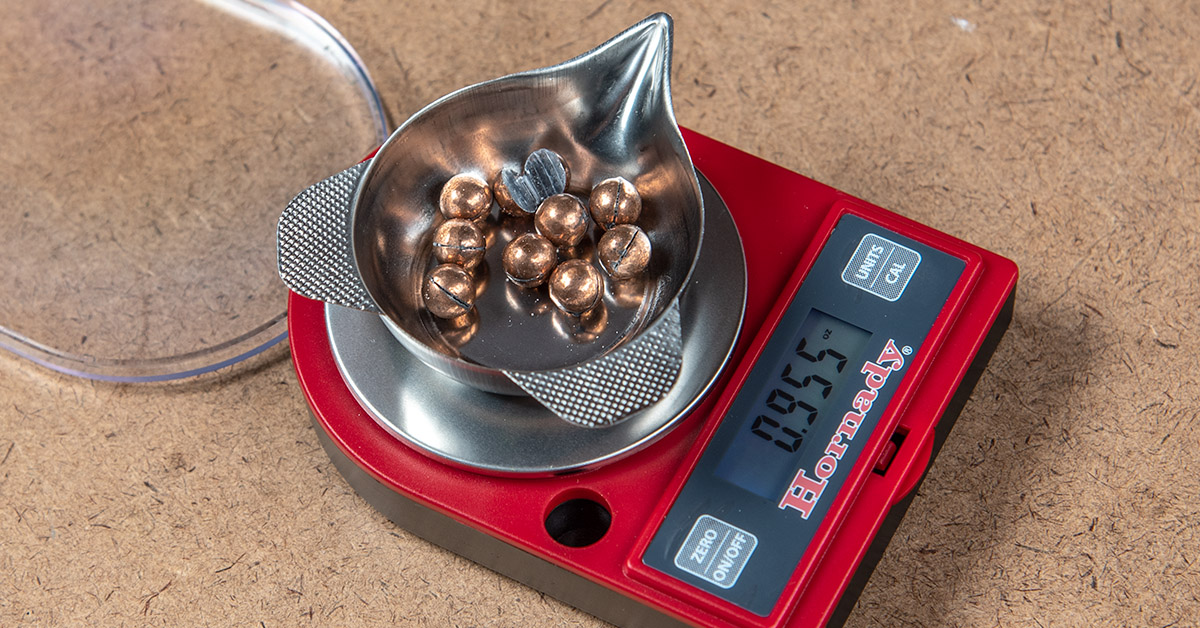 The Force X2 is a 2 3/4-inch, 12-gauge-chambered cartridge with a total shot weight of one ounce. Our random load check on the scale came to 0.955 ounces with a 9-pellet payload. For a 2 3/4-inch cartridge, that is a load most shooters can manage easily enough even in a minimum-barrel-length, polymer stock shotgun.

The big news, though, is not found in the weeds but in the Force X2’s engineered terminal performance.

The split pellets, which are reminiscent of lead fishing weights that have been squished together, are made to separate into two pieces upon impact with the target. There are several advantages to this.

First, the terminal impact energy of the Force X2 pellet is nearly the same as that of a standard weight #00 pellet. A lead #00 pellet (0.33-inch diameter) is about 53.5-54 grains. We weighed a Force X2 pellet (appx. 0.325-inch diameter) at 46.4 grains. So, the Force X2 payload is not giving up much in the way of kinetic energy when compared to #00 lead. Keep in mind that some #00 shot is plated with, say, nickel and can have a lower lead content and, therefore, lower weight than pure lead, with less impact energy than pure lead pellets, assuming equivalent muzzle velocities.

What this means, to get to the point, is that the Force X2’s 9-pellet load will hit about as hard as a standard #00 buckshot load with 8-9 pellets at equivalent velocities yet will separate on impact to yield 18 projectiles inside the target. That represents greater impact energy than you would get were you to launch 18 pellets with half the weight each of a Force X2 pellet. 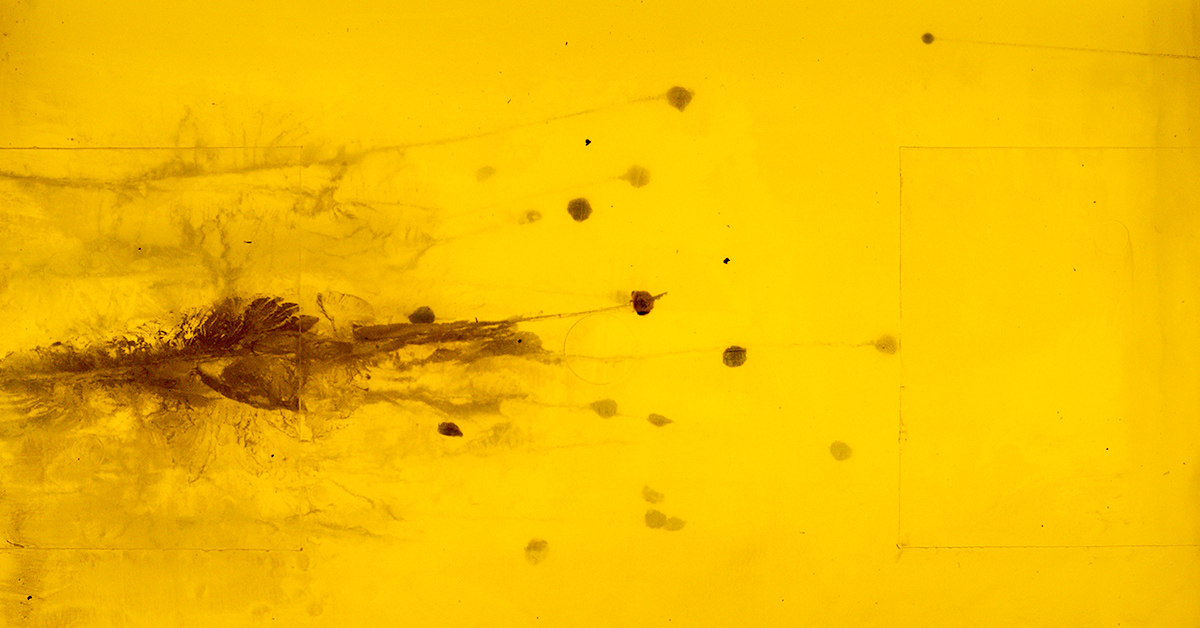 The second advantage is, of course, a doubling of the potential wound channels in the target. Sure, those now smaller pellets will lose their energy more quickly once inside the target than would a solid pellet, but you are also creating greater tissue damage by doubling the projectile count. And with the pellets designed to stay in the target, there is no energy loss. Remember, if #00 buckshot or any pellet exits the target, that represents energy lost to over-penetration. Further, after examining an open Force X2 pellet, we surmise that the sharp edging of the split and separated pellets will incrementally increase tissue damage through slicing and serration more so than a round pellet.

A third advantage of the Force X2 pellet design is that the steeper deceleration and mass reduction of the individual projectiles, once in the target, significantly minimizes pass-through and, thus, collateral damage behind the target. Should a shot be fired off target, the split pellets will also minimize collateral damage more so than solid pellets, such as when firing into a wall. That is a big plus for the home defender. 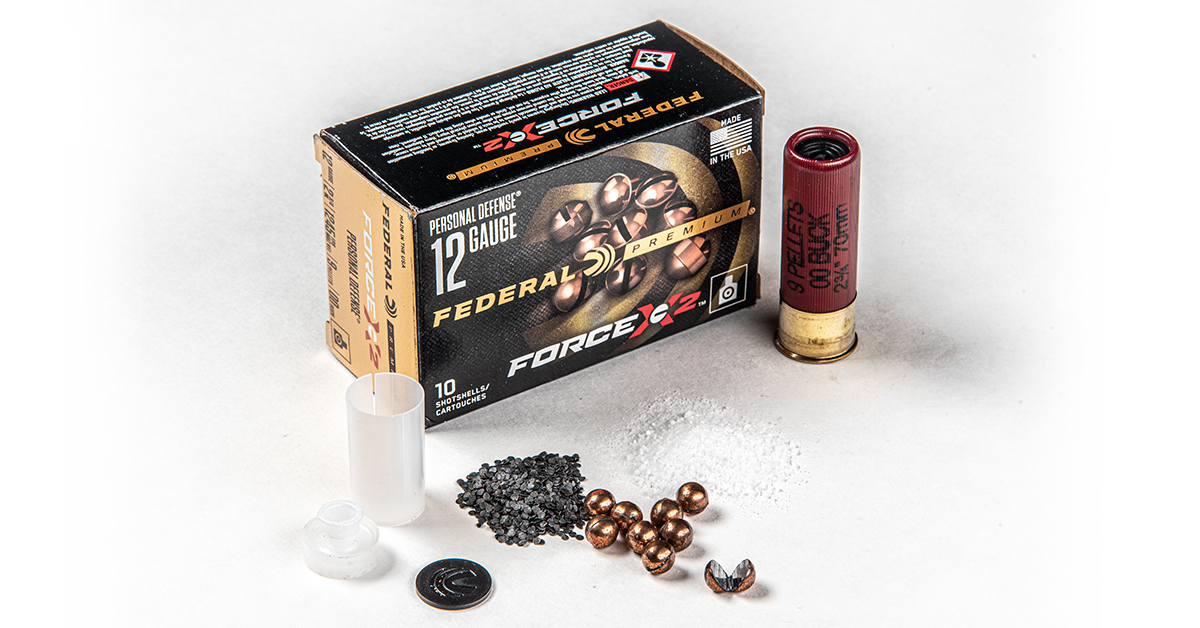 As you can see in the component photo above, the Force X2 utilizes a two-piece wad system. Federal calls it the Triple Plus Wad Column, comprised of a W6 shot cup and a W9 post. Federal developed this technology over 50 years ago to reduce or prevent pellet deformation, and it is a logical choice for the Force X2, given the need to keep the split pellets uniform and intact until they impact the target. The over-powder wad, or post, serves both as the gas seal and as a cushion to manage pellet integrity during gas expansion. Additional protection of the pellets comes via buffer material. Keeping it all sealed is a plastic overshot disc secured with a crisp roll crimp.

All of this is, of course, essential to ensure the split pellets remain whole and closed during flight. Should they open or break apart in the bore, flight characteristics would likely be erratic, not to mention the potential loss of pellets/impact energy on target.

From the impact patterns on our test targets, the system seems to work as designed. All pellet holes were uniform, indicating no opening or separation in flight.

What we did notice, though, was that the Force X2 load shot reliably high from our 18.5-inch cylinder bore Mossberg 500 by about 6 to 8 inches (a condition that could be unique to our specific barrel). 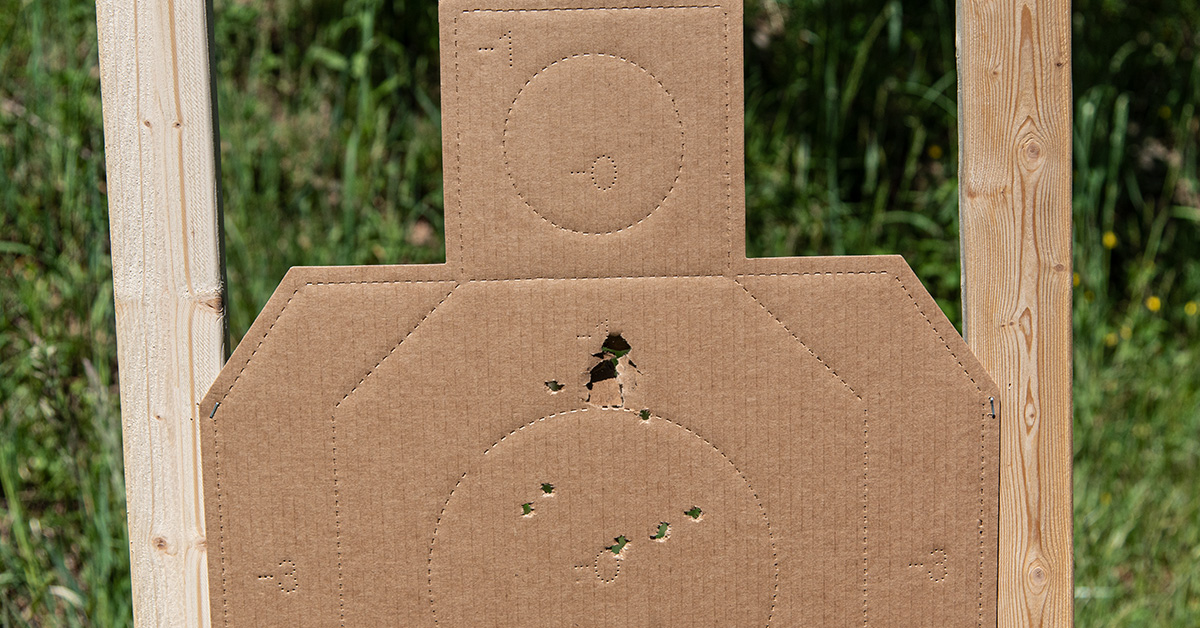 At seven yards, we recorded a 4.425-inch spread. Federal notes that their engineers achieved 4.5 inches at seven yards with an improved cylinder choke and 4.25 inches with a modified choke, so we felt comfortably in the zone with our results. 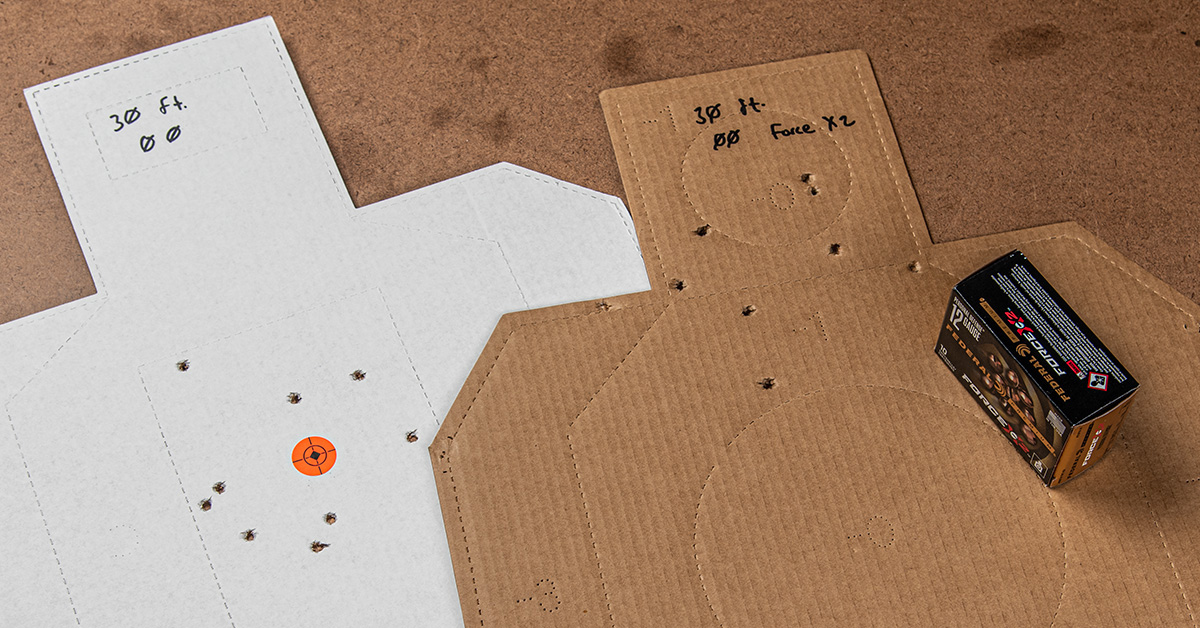 While we did not have ballistic gel to independently test penetration, Federal did provide their own testing results, which are interesting.

Standard #00 buckshot can blow through 12 inches of ballistic gel. Using 10-percent ballistic gel, Federal engineers found the average depth of the Force X2 pellets, launched at 1245 fps, to be 4.5 inches before they start to break apart. After breakup, the average penetration of the 18 pellet halves was around 9.5 inches. That is putting a lot of energy into the target while maximizing wound channeling and minimizing the dangers of over-penetration in close-quarter environments.

With factory ammunition availability being extremely limited, most folks are going to feed their shotgun with whatever they can find that will reasonably get the job done. But if you can find it, the new Federal Premium Force X2 would certainly be a good first choice for the home defender shotgun. 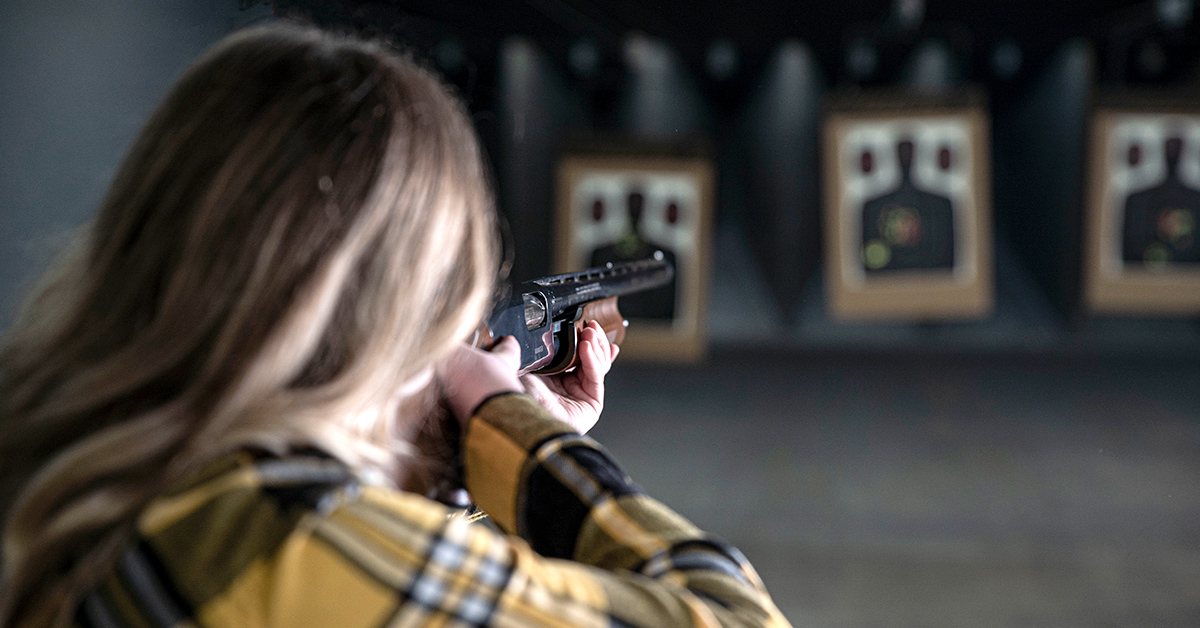