There is no question that the unassuming shotgun gets third billing in most personal defense firearm discussions. Not as sexy as an AR-15, less discrete than a handgun, the shotgun is often relegated to “in the closet” duty.

Too bad, because the shotgun, in personal defense size and trim, is undoubtedly the most efficient hammer you can swing to neutralize a threat inside typical personal defense ranges…and even beyond. The most common defensive shotgun load — the #00 in 2-3/4 — delivers devastating results with a multi-projectile load that minimizes misses in a high-stress engagement. And the defensive slug, while demanding more attention to critical aiming given its single-projectile design, is about as big a hammer as you can wield for personal defense.

Which is right for you? That largely depends on personal preference and the conditions in which you may use a shotgun for defense. A #00 buckshot load is tough to beat, and at normal in-the-house ranges, it is going to stop most assailants cold. Even more devastating results come from a one-ounce chunk of lead travelling in excess of 1,000 fps, but that single projectile must be well-aimed. There is also collateral damage to consider when choosing slug over buckshot; that big slug takes some stopping.

Here, we want to look at shotgun ammo from a brand you might not think of terms of defense — Fiocchi. That’s because Fiocchi has made its name in the world of high-end sporting clays competition and waterfowl hunting. What many folks don’t realize is that Fiocchi also produces a solid line of defensive shotgun ammo along with precision centerfire rifle ammunition and target and personal defense handgun cartridges.

We’ve been testing Fiocchi’s defensive shotgun offerings in assorted tactical shotgun platforms over the last couple of years and have been wholly satisfied with their performance…as we should be. The company has been a leader in shotshell technological for many years, developing the nickel-plated shot and being the first company to produce NATO-qualified lead-free primers. In short, Fiocchi knows shotshells.

While the Fiocchi name might ring “Italian” (it should, since the company has been based in Italy since its founding in 1876), American consumers largely don’t realize that most Fiocchi shotgun ammunition they buy is manufactured in the U.S. at the Fiocchi USA facility in Ozark, Missouri. Made in the USA is another bonus in our book.

Fiocchi currently offers three different defensive shotgun loads for civilian/LE applications and three specialty law enforcement-only loads. We’ll be focusing on the civilian/LE loads since they are most applicable. 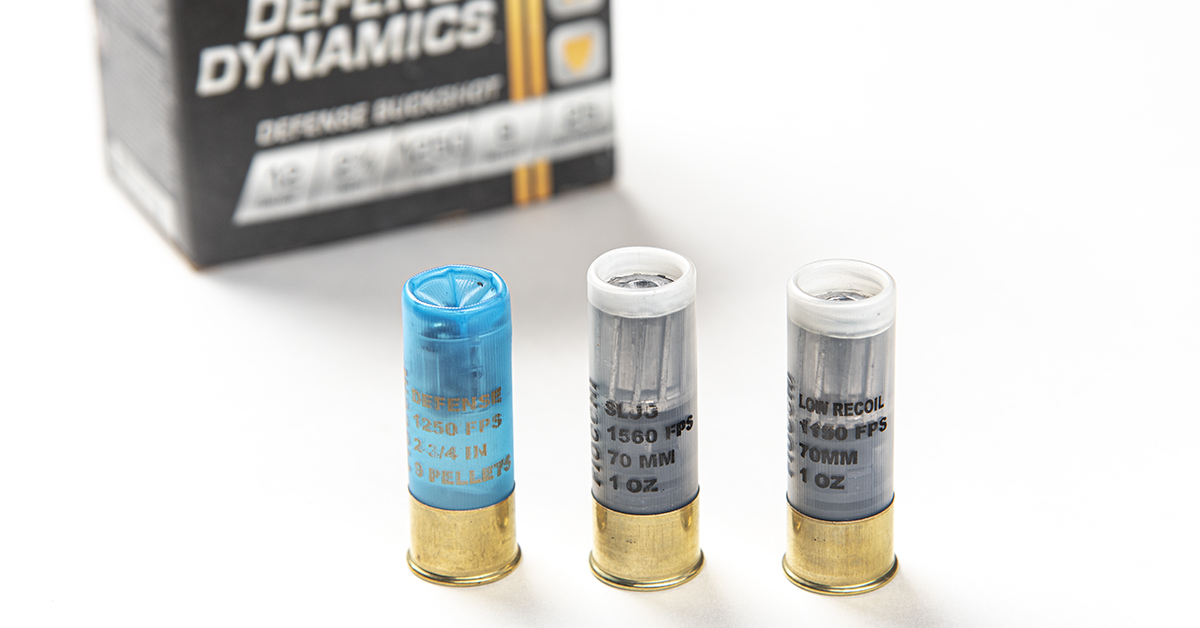 Fiocchi’s civilian/LE shotshells fall under the company’s Defense Dynamics banner. All are made for 12-gauge chambers and are offered exclusively in 2 3/4-inch hulls. The civilian/LE loads include one #00 buckshot and two 1-oz. slug loads. 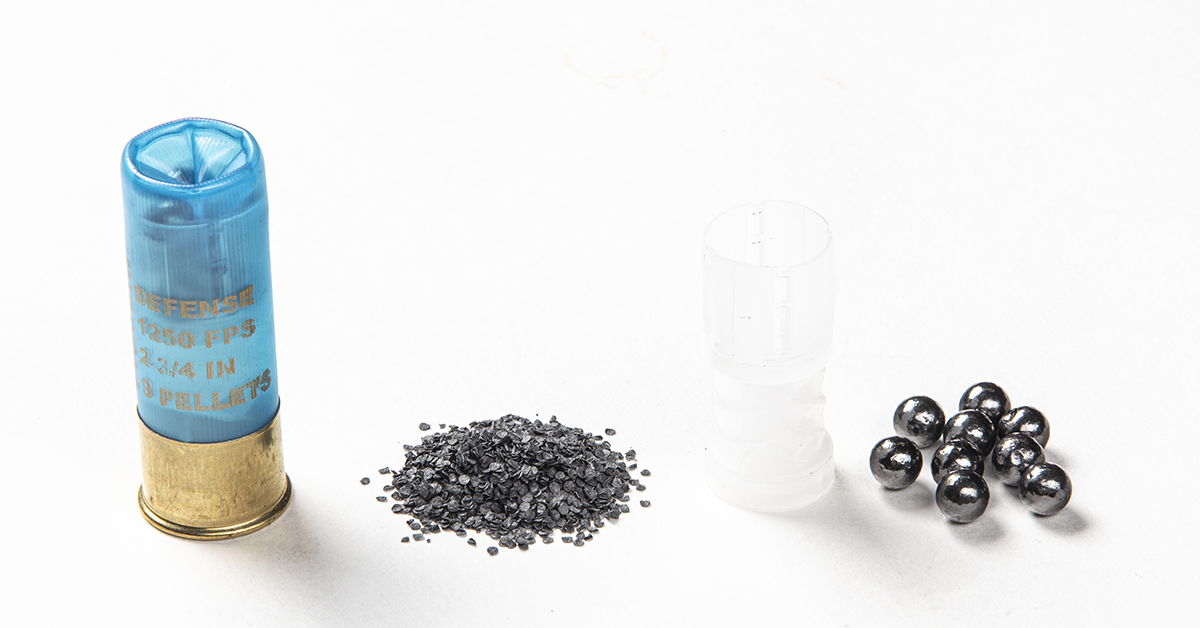 We have found this load to be an easy shooter in terms of recoil, and capable of maintaining a lethal defense pattern within 30 yards when propelled from an 18.5-inch cylinder bore barrel. 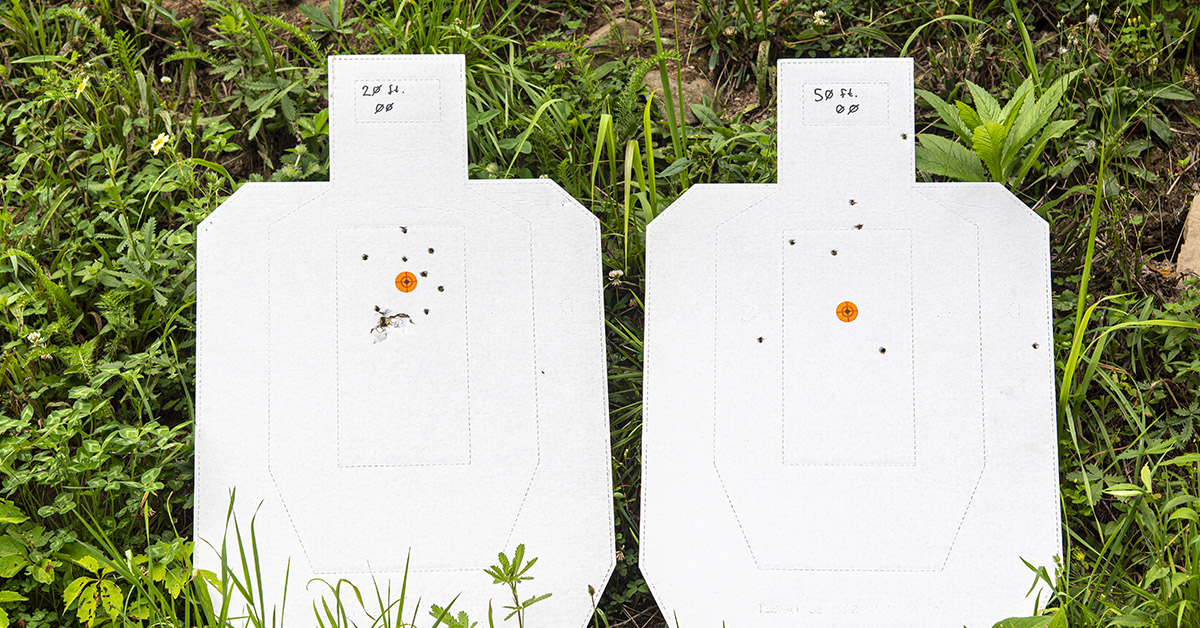 Shooting at 10-foot intervals from 10 to 100 feet, this load (rated at 1,250 fps) delivered respectable pellet distribution across our test range. 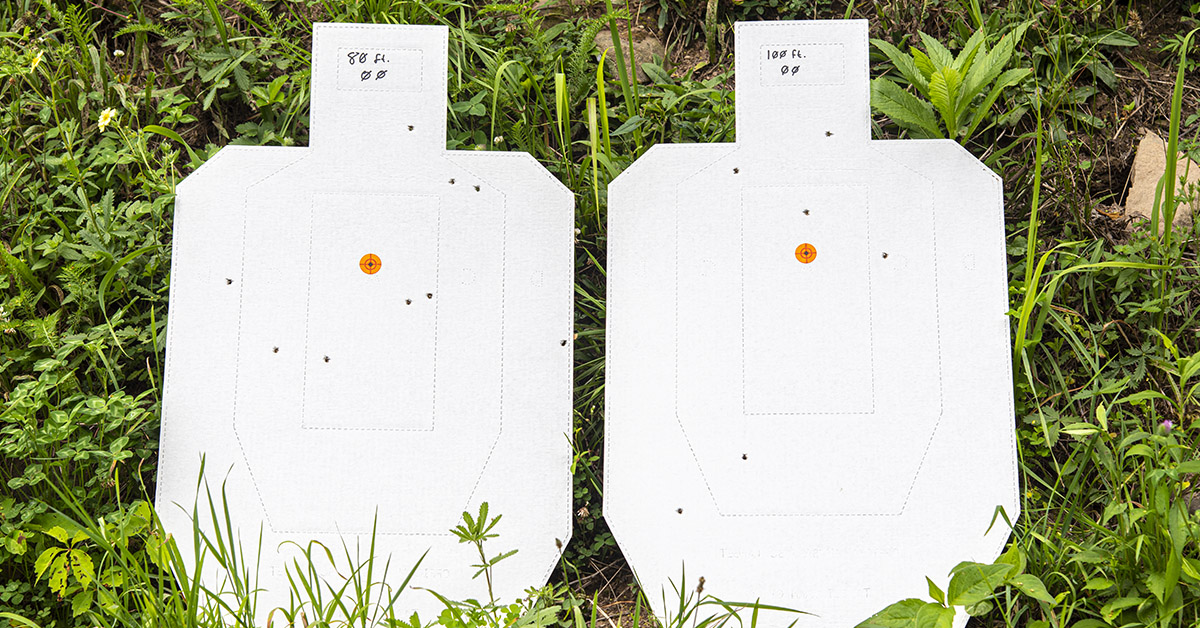 As you can see, even beyond the typical defensive engagement distances, the #00 buckshot holds together and is certainly capable of dissuading — if not neutralizing — the target beyond 30 yards. 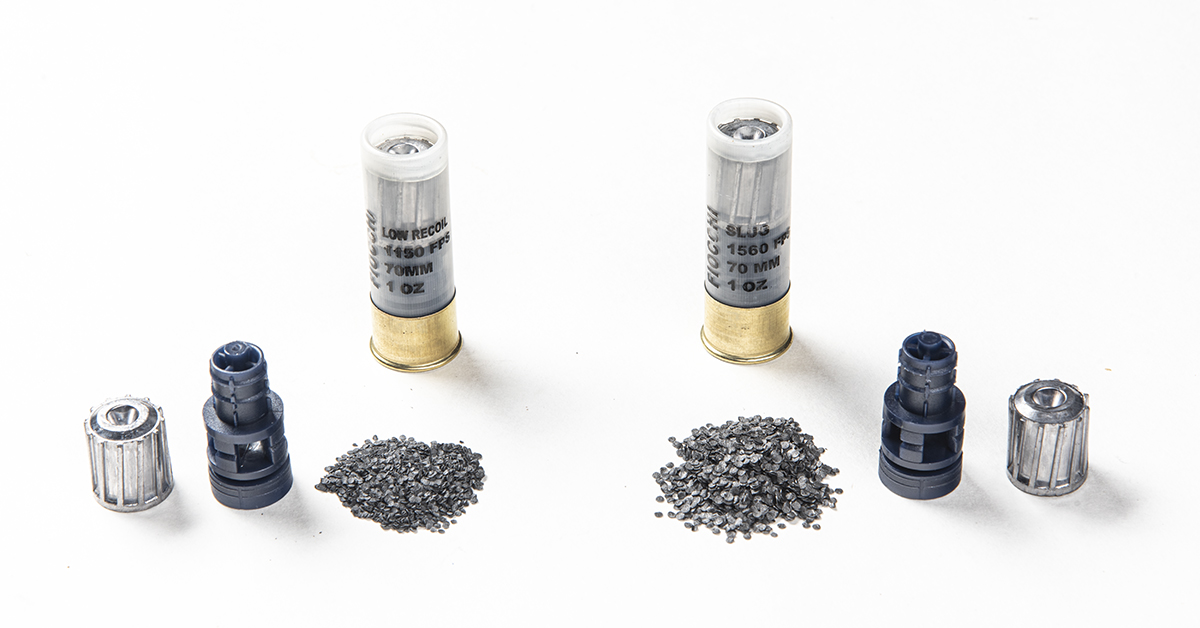 For maximum neutralizing potential, the 12-gauge slug reigns supreme. Here, Fiocchi offers two options in their Defense Dynamics line. The 2 3/4-inch shotshells both hold a 1-ounce Foster-type slug measuring .7250 inches in diameter. That’s darn close to the 12-guage cylinder bore diameter of 0.729 inches. The “rifling” on the slug’s exterior doesn’t impart the stabilizing spin of a rifled barrel, but the reduced slug-to-bore surface area provided by the grooving does offer stabilizing contact with the bore upon initial expansion and with minimal friction, allowing the slug to conform to modestly choked barrels.

The difference between the two shotshells is in the powder charge. The high velocity shotshell (#12SLUG, photo right) exits the muzzle at 1,560 fps. This load carries more “thump” to ensure cycling when shooting semi-auto shotguns. Naturally, a 1-oz. payload travelling that fast is going to make its presence known in the shooter’s shoulder — particularly when shooting pump-action shotguns.

For a softer kick, Fiocchi offers the low-recoil #12LRSLUG shotshell (photo left). A less potent powder charge is responsible for the lighter shoulder bump and reduced velocity of 1,150 fps. This is a good defensive ammo option for those shooting pump-action shotguns or for smaller-frame shooters who can’t manage heavy recoil. 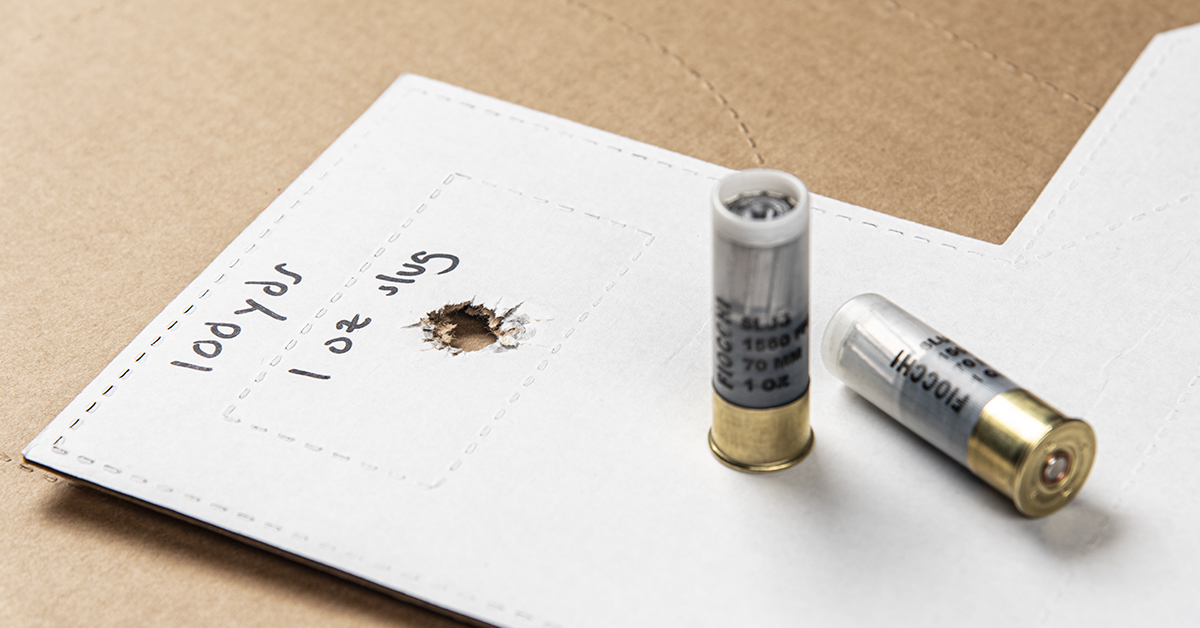 Although slugs propelled through a smoothbore shotgun barrel can never match the accuracy that can be delivered from a rifled barrel, Fiocchi’s Aero slug certainly held its own during our testing. Shooting with XS Sights‘ railed ghost ring rear and banded standard tritium dot front sight installed on our Mossberg 500 delivered consistent head shots at 100 yards. Needless to say, we were impressed.

As with rifles and handguns, every shotgun has its preferred load, which is why we always recommend testing and patterning different defensive ammo in order to find which works best with your gun. Fiocchi’s Defense Dynamics line of #00 buckshot and slug shotshells is certainly a good place to start. 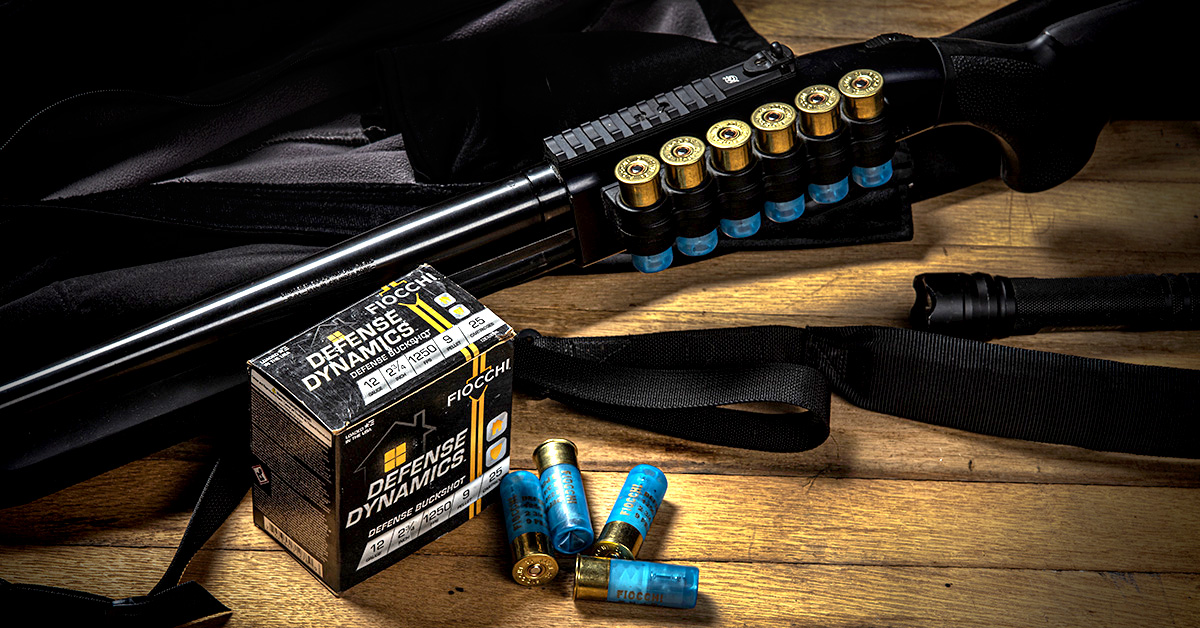