Like all hunters, I’ve been asked the age-old question: “If you could hunt only one creature for the rest of your life, what would it be?” The thought terrifies me; I love pursuing many critters, from deer to elk to doves to turkeys. If I had to pick one, though, it would be the Canada goose.

I realize that some who’ve read my work over the years are shocked, and I get it. Some of you would have said pronghorn; others whitetail deer, and some, elk. The truth is, I cut my hunting teeth chasing geese, and when the migration begins and dark-colored blobs of honkers appear on the horizon, my heart starts to pitter-pat a little harder. 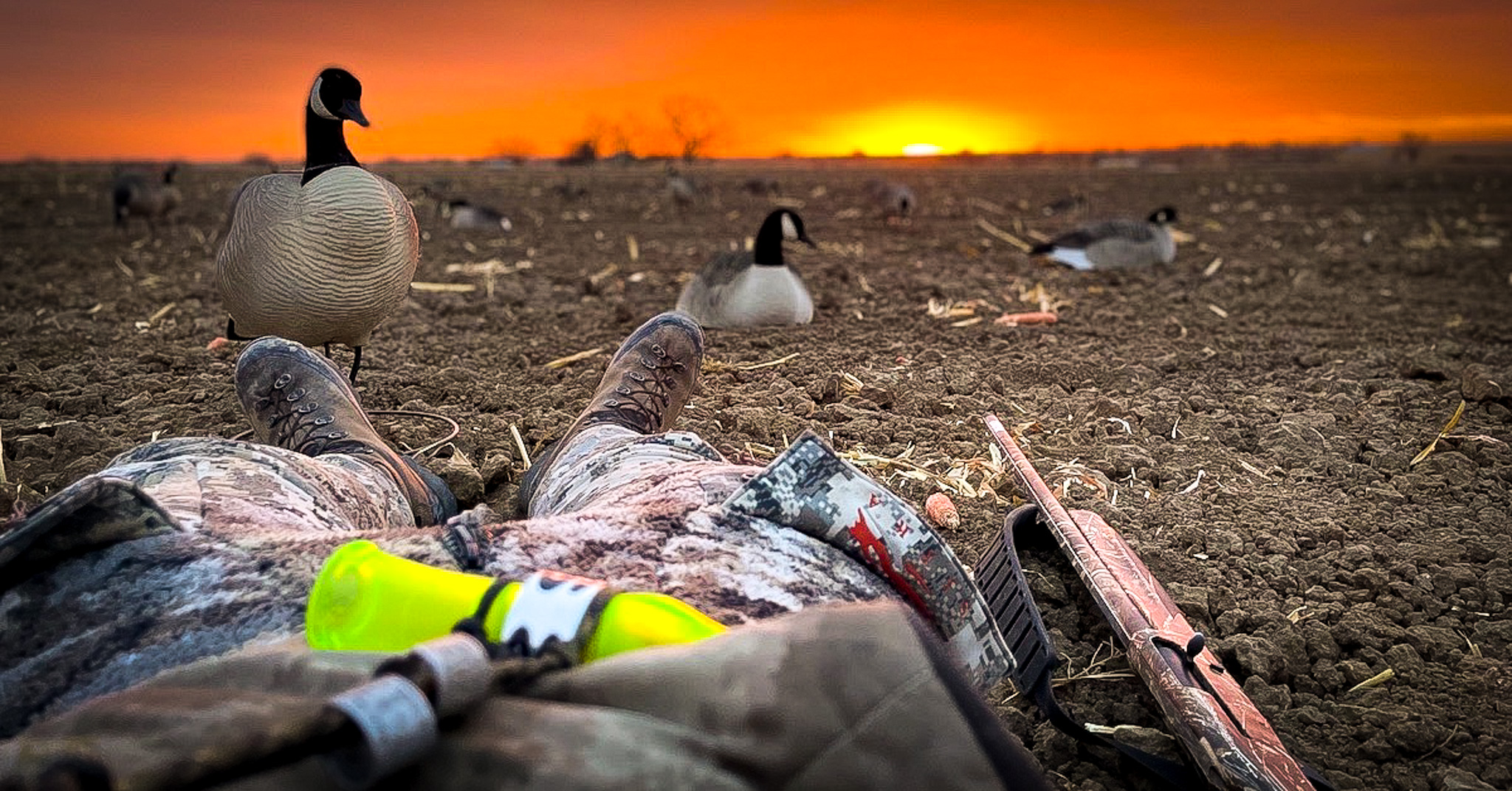 Over 30 years in the goose fields, I’ve learned a thing or five about what I want in my shotgun when the “take ’em” call comes.

As good as top-tier steel loads are — as remarkable as improvements in speed, penetration, and overall quality have become since the 1991 nationwide non-toxic shot (for waterfowl) regulations, steel can’t compare with heavier metals. 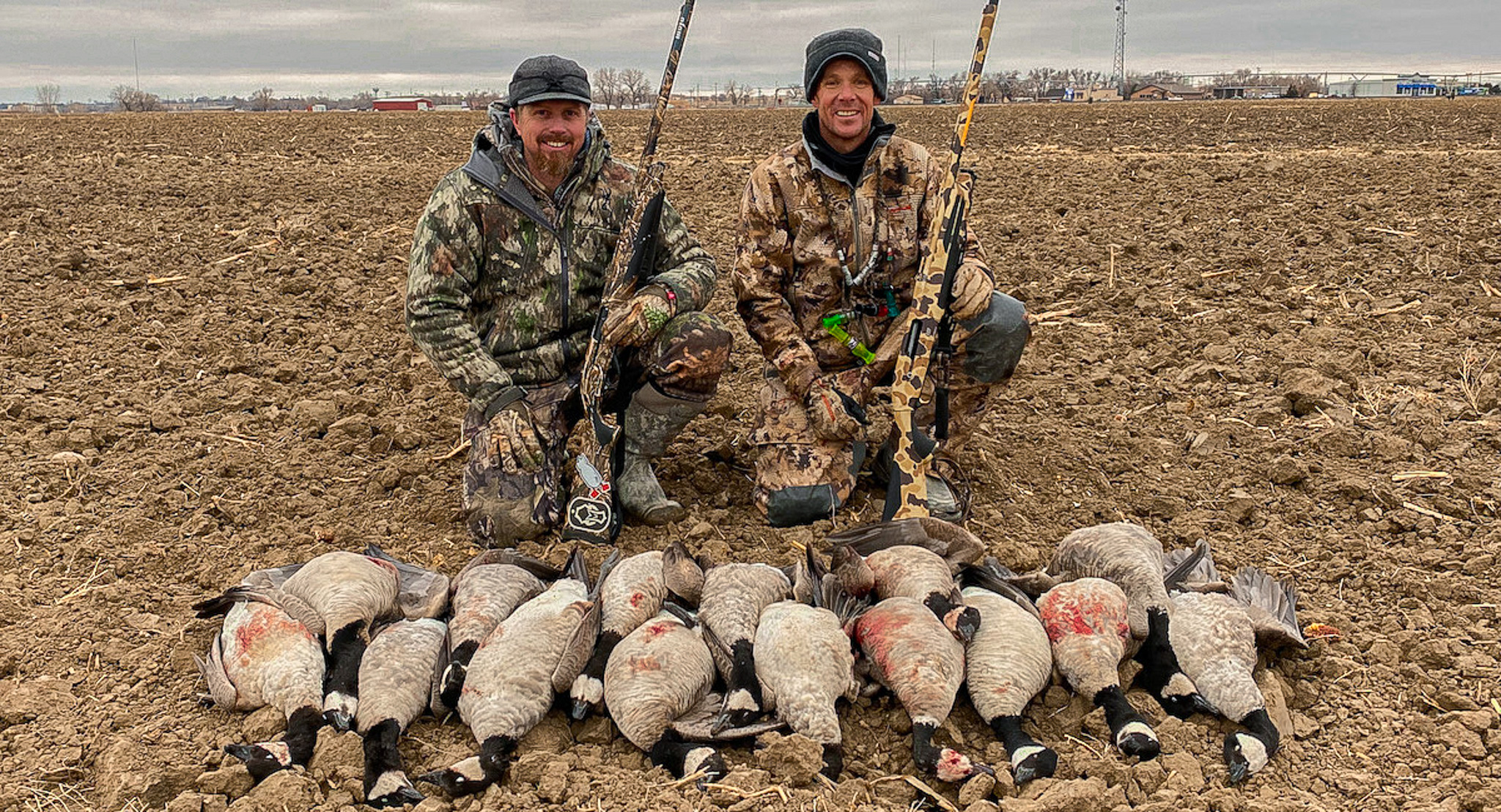 Enter bismuth and tungsten. Both are metals, and both are more dense than lead, and like lead, both smash and fragment on impact, which means brutal penetration and dead-right-now geese. Yes, these shotshells cost more, and it’s common for only 10 to come in a box rather than 25; however, when honkers are on the menu, I will spend the extra money. More to come on this.

Recently, I got a chance to load my Browning Maxxus 2 with Fiochhi’s Golden Waterfowl Bismuth. Early migrators, lesser Canada geese mainly, arrived ahead of a front. My choice for the next morning’s mission was Fiochhi’s Golden Waterfowl Bismuth 3-inch #4s. With wind and snow forecasted, I figured the geese would be on the deck and knew their bellies would be craving carbohydrate-rich corn. Our goose crew suspected the first shots over decoys would be 20 yards or less, and I wanted a load with plenty of pellets. 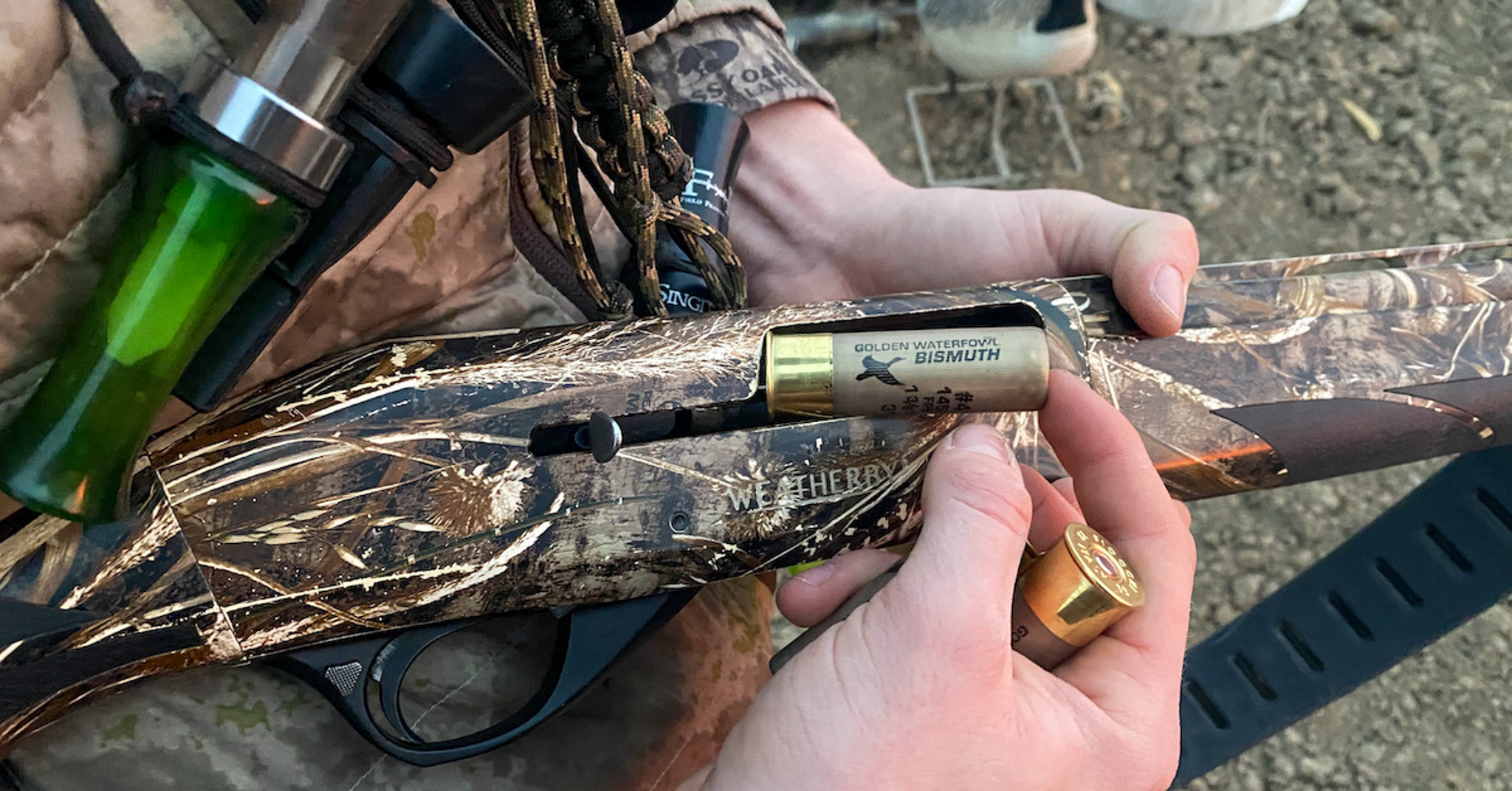 Fiocchi’s Golden Waterfowl Bismuth 12-gauge shotshells sport a 1 3/8-ounce payload and sizzle from the barrel at 1,450 fps. The #4 high-density 9.75g/cc bismuth created a scary pattern at distances of 20, 30, 40, and 50 yards during testing, and I like to have a lot of shot in the air when possible. This is a feature that makes bismuth loads great — shooters can drop down in shot size, get more pellets in the air, and still devastate fowl. This load from Fiocchi provides that.

The sealed crimp (love this feature) hull is a sleek golden color and is moisture-resistant. Another plus is that Fiocchi is committed to producing zero-pollution products via EnviroShield. Golden Waterfowl’s zinc-free primers, bismuth, and biodegradable wads are a shining example of the manufacturer’s commitment to the future of hunting. 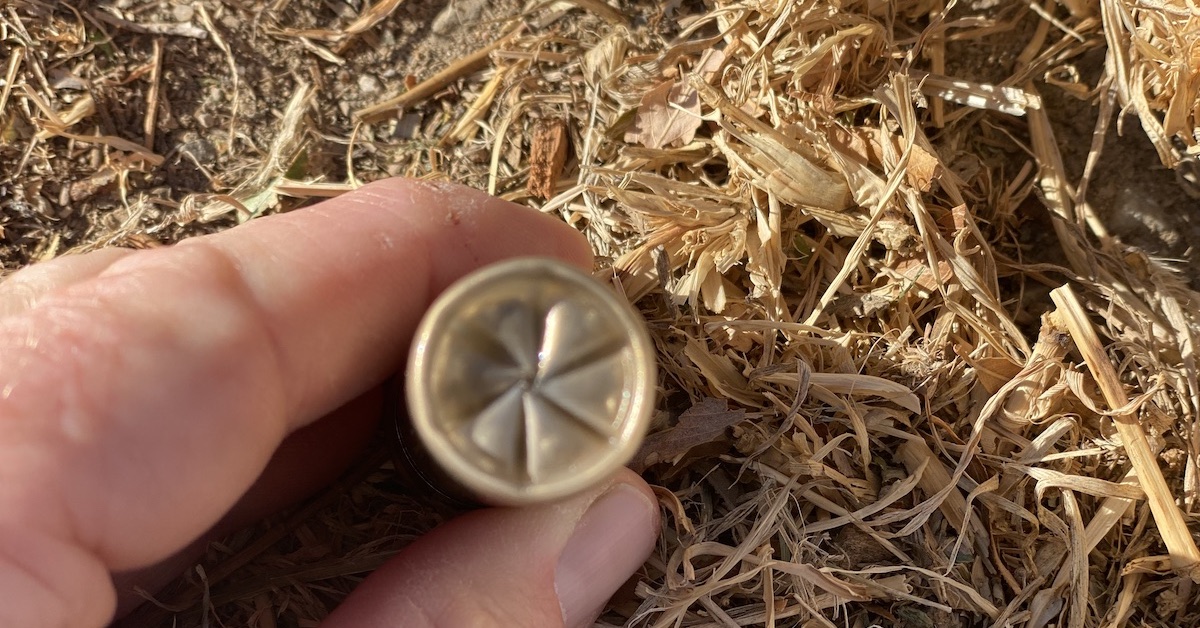 Of course, this is all sunshine and roses, but how do they perform in the field?

Knowing how well the loads patterned from my Browning Invector-Plus Extended Modified Choke, I suspected that geese would crumble when it was time to let the shotguns sing, and I was right. The first group — and there were about 100 — came in low, swung into the wind, and dropped their feet. There were three of us in the decoys, and nine shots produced seven dead geese. I flat-missed on my first shot of the season; I always do, and another buddy noted he pulled behind his last bird. 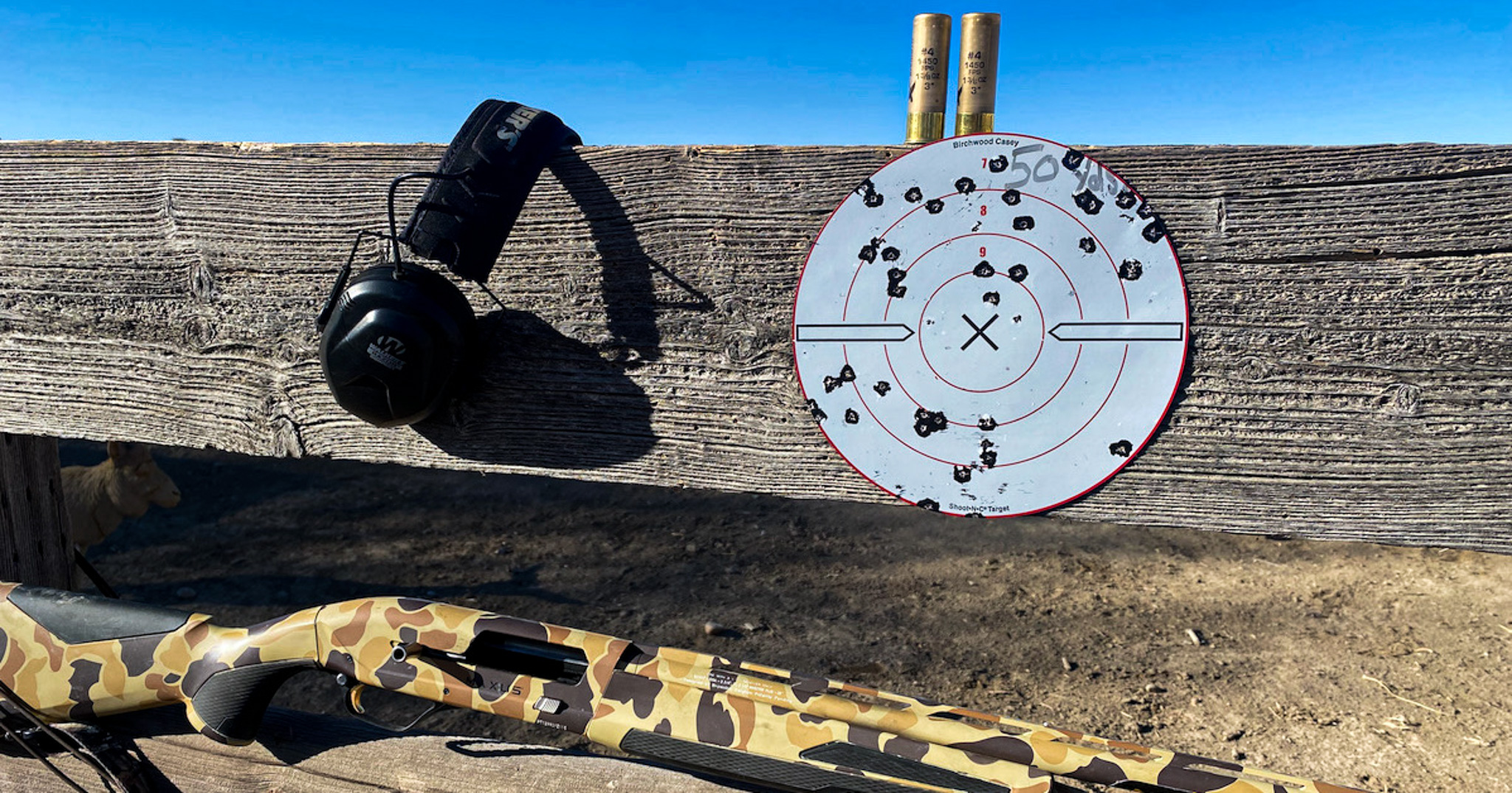 We should have gone nine for nine, but hey, things happen. What I was thrilled with, and what those reading this should pay special attention to, is that all seven geese were stone dead — even those laying 47.4 yards from the layouts. I did measure the distance with Leupold’s RX-5 FullDraw 5 Rangefinder. There were no cripples up walking around or flapping. The dog didn’t take a beating from the wings of still lively geese, and we weren’t running around like a bunch of chickens with our heads cut off chasing cripples in the decoys. Instead, we hunkered back in our layouts and dropped six more honkers out of the next flock.

It didn’t take us long to fill a three-person five-bird limit, and the shotshells performed brilliantly. Had we been chasing Giant Canada geese, and yes, that’s an actual sub-species, I would have gone up in shot size to Fiochhi’s Golden Waterfowl Bismuth 3-inch #2s, but for lesser geese, the #4s were lethal. Everyone in the group was pleased with their performance and appreciated how well a pair of semi-autos and one Benelli SuperNova pump-action cycled them. Later, when we cleaned the birds, wound channels were deep, and hemorrhaging was heavy. 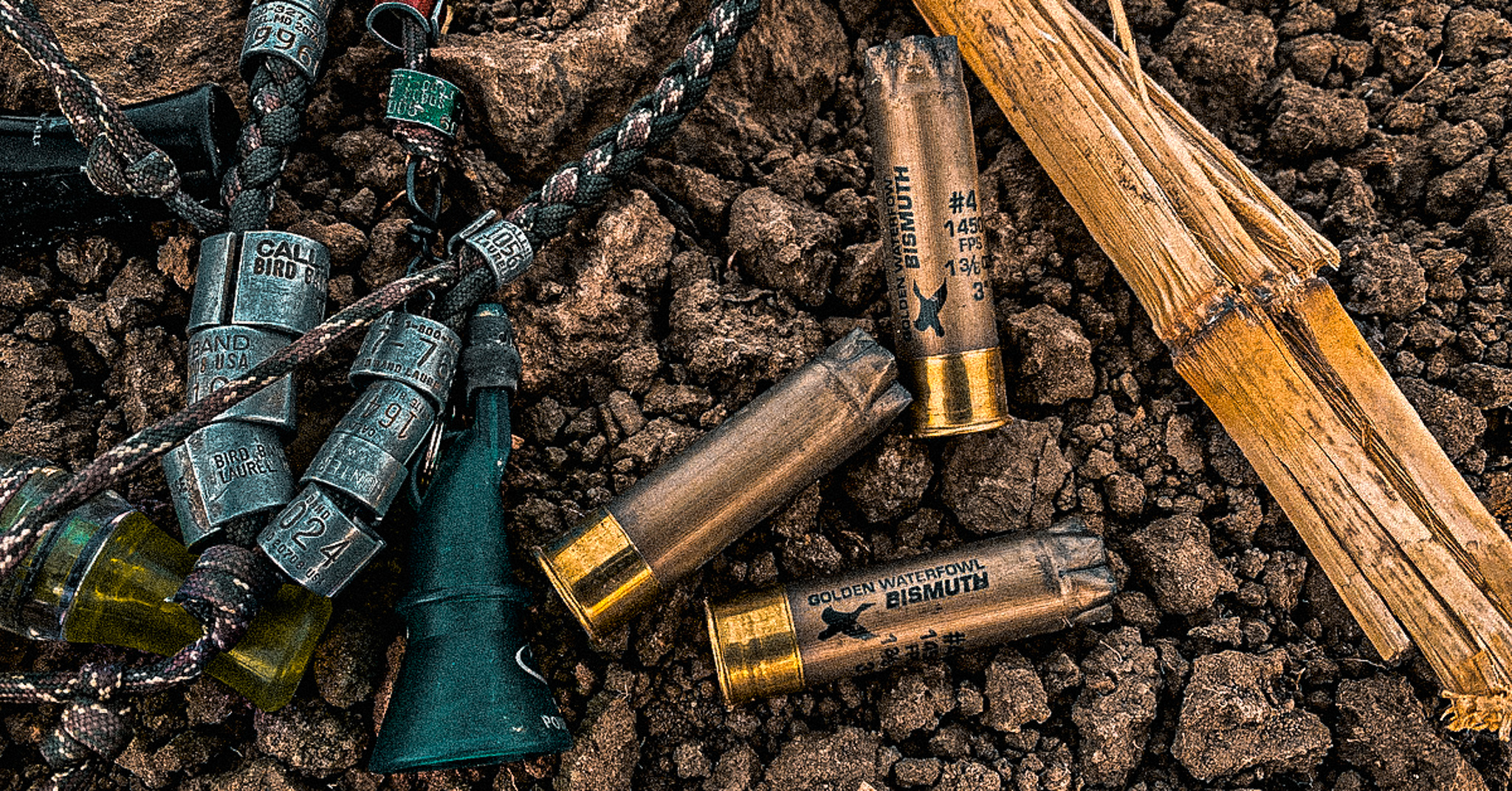 I promised earlier in the article I’d return to something, which I feel is very important, and that’s the true benefit of shooting a quality shotshell. You invest hundreds, if not thousands, of dollars in decoys, layout blinds, A-frames, leases, etc. You spend tons of hours following flocks from their roost to the field, which costs some serious coin with the price of liquid gold.

Why not get quality ammunition that will fill the freezer and help you make great memories? When I shoot quality bismuth or tungsten loads, geese die. I can shoot a 3-inch load and put more pellets in the air because I can drop down a couple of shot sizes from steel, and my shoulder isn’t bruised at day’s end. Also, this is the essential piece of the puzzle: I save money because I go through fewer shotshells. I’m not wasting ammo finishing off cripples; it doesn’t take me two shots to kill a single bird. I knock down more doubles and triples, which allows me to capitalize on each flock that commits to the decoys. 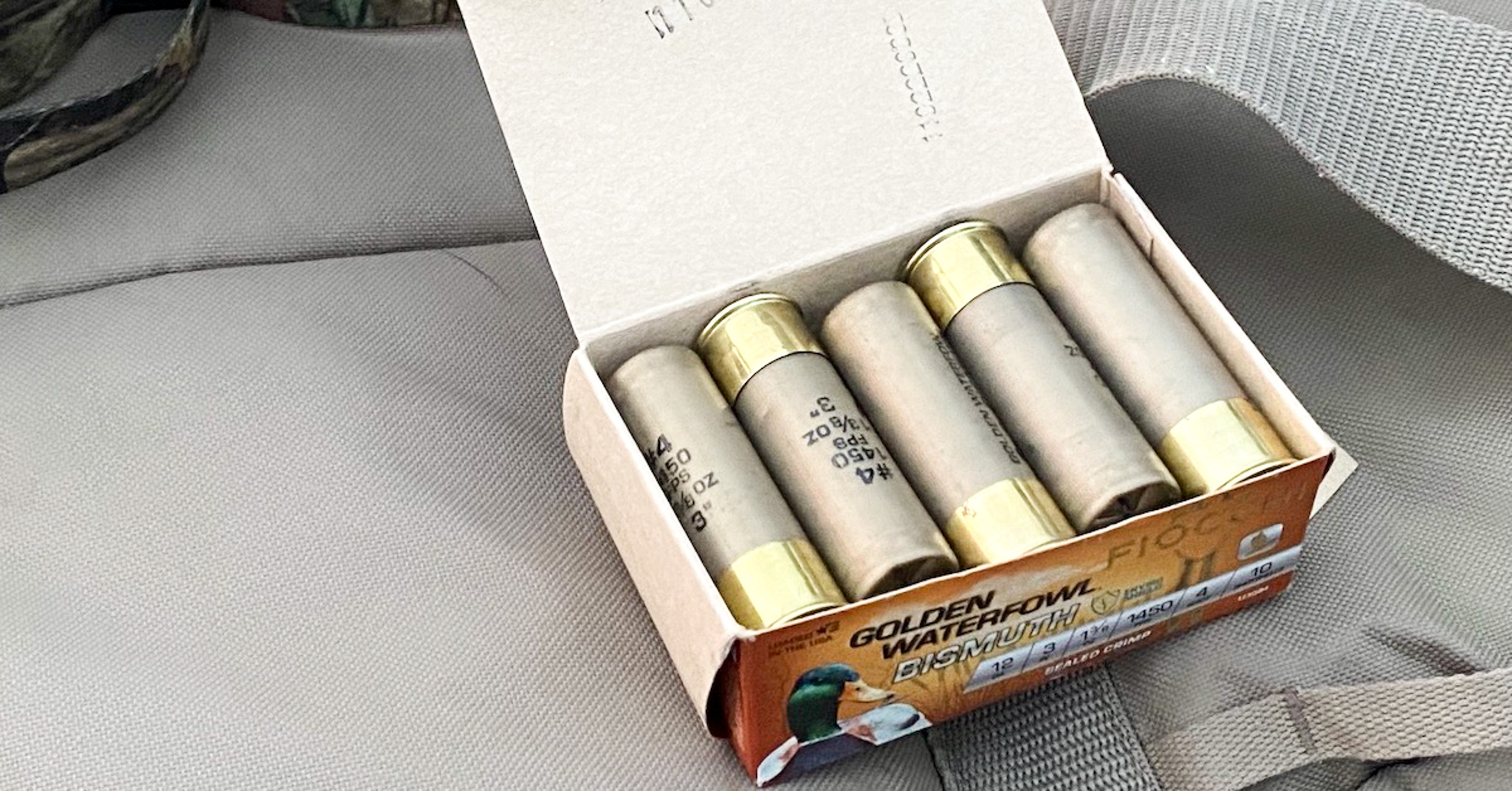 There is nothing fun about shooting three times, knowing you hammered geese and seeing nothing but feathers fall. There is nothing enjoyable about sailing geese, going three fields over, and chasing them down. It’s terrible to watch your Labrador take a beating from the wings of a wounded goose, and it’s backbreaking work to chase numerous wounded honkers through the decoys. Chasing geese costs you because incoming flocks see the commotion in the field.

If you’re looking for quality waterfowl ammunition you can depend on to perform in the field, grab a box, or a case, of Fiochhi’s Golden Waterfowl Bismuth and drop us a comment about how they worked out for you.