My first handgun was a 1911 steel-frame single stack .45. Oddly enough, my latest addition to the gun safe is also a single stack .45 with a steel frame. The big difference is the new .45, dubbed the Springfield Emissary, is a better firearm in multiple ways.

Aluminum frame 1911 handguns certainly have their place. Double stack and polymer frame 1911 handguns…not so much, in my opinion. My hand isn’t large enough for a Glock 21, and the double-stack 1911 is even more difficult for me to handle. There is something unique to the single-stack steel frame 1911, which makes the Springfield Emissary .45 a highly developed version of a classic pistol.

Let’s look at what the Springfield Armory Emissary is and isn’t. 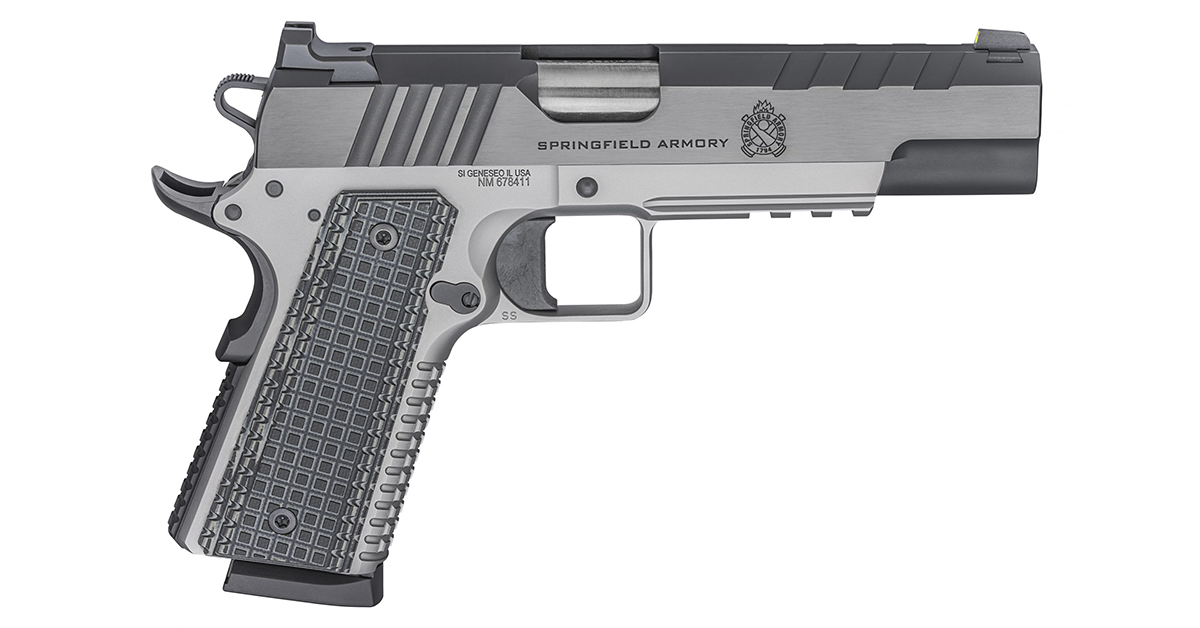 The pistol isn’t a competition gun. While it would not be out of place in IDPA and various practical shooting matches, the pistol is designed for tactical use. It would be a fine all-around service pistol, and the Emissary is suitable for concealed carry. I have carried a steel frame 1911 Government Model concealed for many years. The task is quite simple with proper leather selection and a sturdy gun belt. The Emissary is a fine defensive pistol, an outstanding home defense handgun, and a firearm well-suited for outdoor use. The .45 ACP should never be discounted as a field gun. For feral dogs, big cats, and bad guys in the woods, there isn’t a more effective handgun. 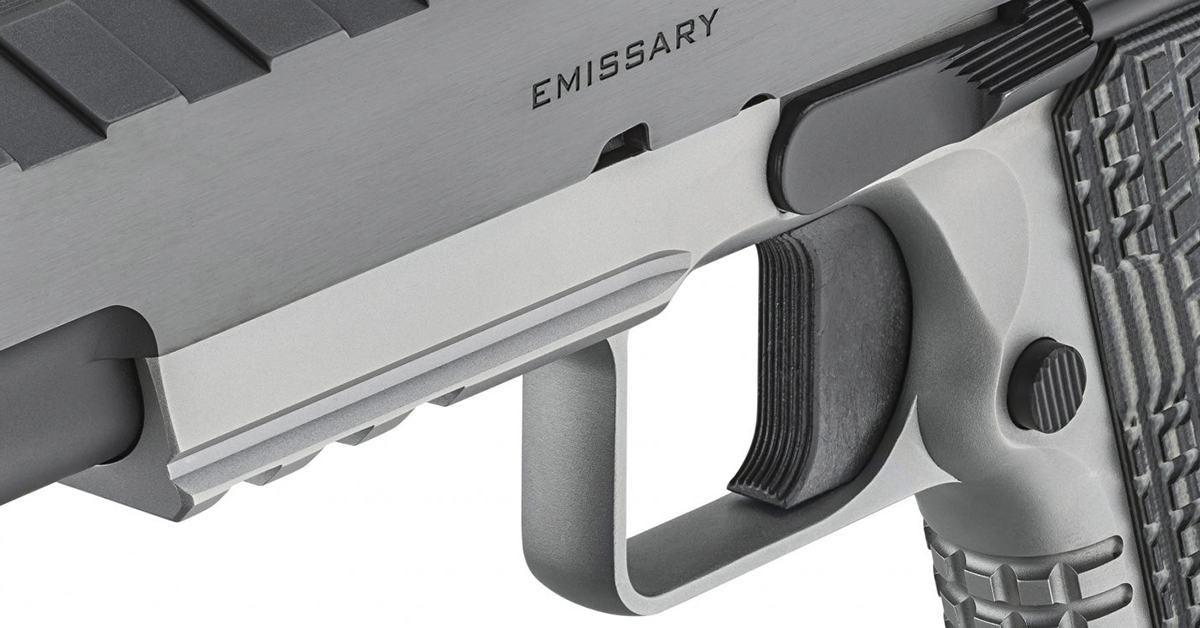 If you are going to push a handgun in these roles, it should be a versatile, reliable, and effective firearm. There should be no compromises other than the usual weight, recoil, and balance concerns. The Government Model 1911 is a versatile handgun with plenty of power and accuracy to defend your life. The Springfield Emissary is a stunning example of a Government Model .45, but it doesn’t quite equate to grandpa’s 1911. The Emissary, Springfield claims, has custom features not seen on other handguns. I agree. The square trigger guard is most noticeable. I have seen the square trigger guard on custom pistols from the Swenson and Novak era, but am not aware of a factory 1911 with this modification before the Emissary. I don’t know if any of us use the finger on the trigger guard grip style anymore, but the squared guards offer a striking appearance. 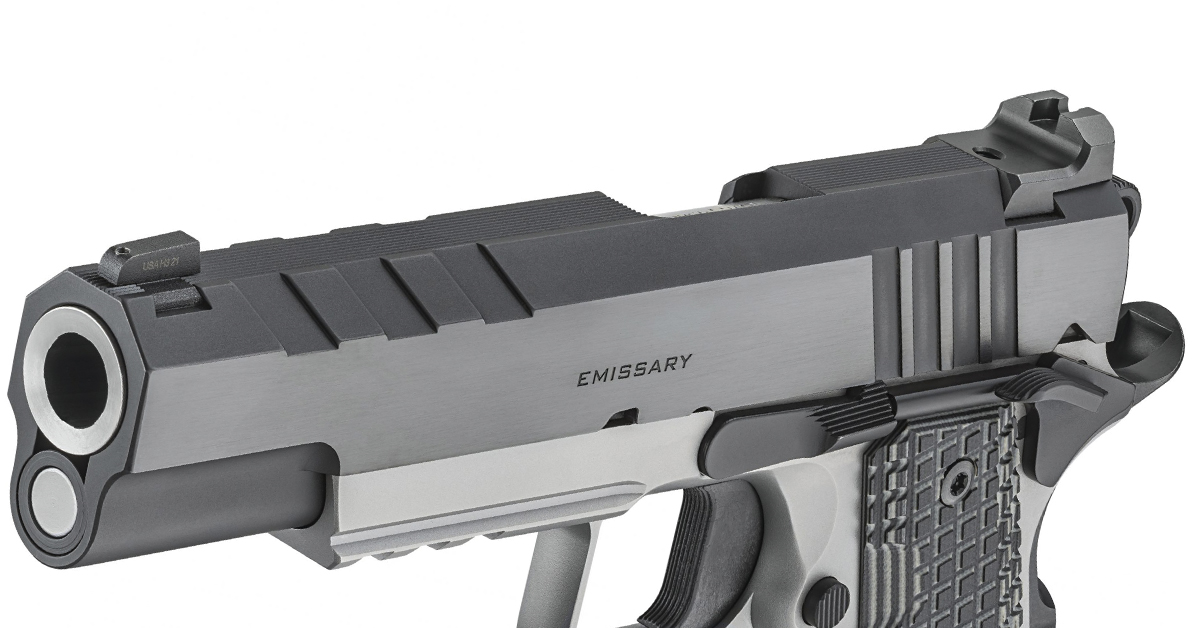 The pistol features a tri-cut slide. The angles and bevels are not easy to machine, and they are executed with precision and showcase excellent final fit and polish. This isn’t a move made for economy but for appearance. The pistol features three forward cocking serrations cut at a sloping angle. 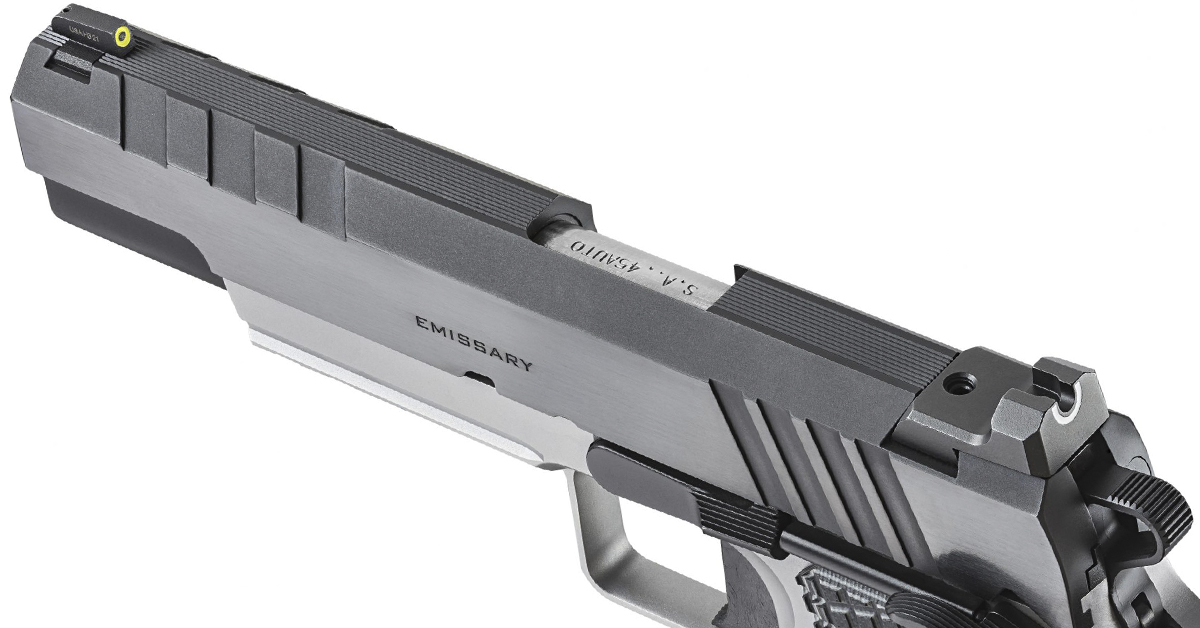 The pistol’s sights are a good personal defense combo. The front sight is a tritium roundel, and the rear sight is serrated on the rear. The rear sight features a U-notch, which creates rapid acquisition of the sight picture. Fast combat shooting will be easily accomplished by a trained shooter. Precision shooting is also possible, as the test program proved. The pistol doesn’t use the conventional barrel bushing lockup. Rather, the Emissary features a bull barrel that fits tight to the slide and eliminates the barrel bushing. The guide rod is a full-length version, dictated by the bull barrel. It’s a classy setup. The bull barrel may be more accurate and more reliable in long-term use but it will take a great deal of ammunition to prove this.

The mechanics of the Emissary are proven. At less than 1,200 rounds from my hand, the pistol has produced excellent function and accuracy. There are features that make the pistol pleasant in some ways and practical in others. The radius line between the sights is a good feature. The trigger is well designed. It is flat and grooved, and I am pleased Springfield did not include a target trigger. Target triggers are just that — target triggers — and have no place on a service-grade handgun. The Springfield Armory Emissary trigger breaks at a clean 5.0 pounds. 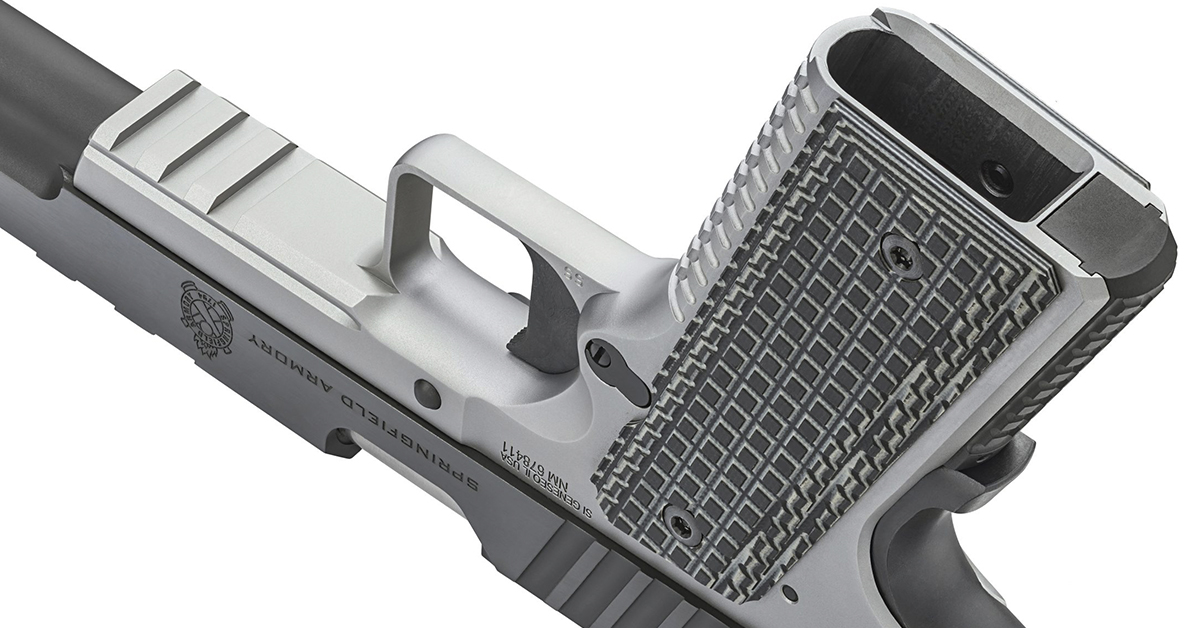 The G10 grips are thinner than standard. Since the grips are thinner, the grip screws and bushings must also be abbreviated. The front strap treatment features 10 lines-per-inch blocks on the strap. They are not diamonds or pyramids, but blocks, and they work well. The balance of adhesion and abrasion is excellent.

The slide lock safety is crisp in operation. I look over many 1911 handguns when I visit gun shops. If the slide lock safety fit is mushy, chances are the pistol isn’t very well fitted. I have no room for such a handgun. The grip safety is a well-designed beavertail type that funnels the hand to the gun and allows a high hold. The grip safety properly releases its hold on the trigger halfway through compression. If you release your hold on the grip safety, the pistol is rendered safe as the trigger is locked.

Internal finish is good with no glaring tool marks. The two parts of the feed ramp are well polished with the proper 1/32-inch gap between the two halves. The slide is nicely blued, and the frame is polished. Overall, the handgun’s appearance leaves nothing to be desired. Internally the pistol doesn’t incorporate a firing pin lock or drop safety into the action. In common with Wilson Combat, Springfield uses a lightweight firing pin and extra power spring. This prevents the firing pin from running forward. This system is proven in testing and avoids the over-complication of a firing pin block. 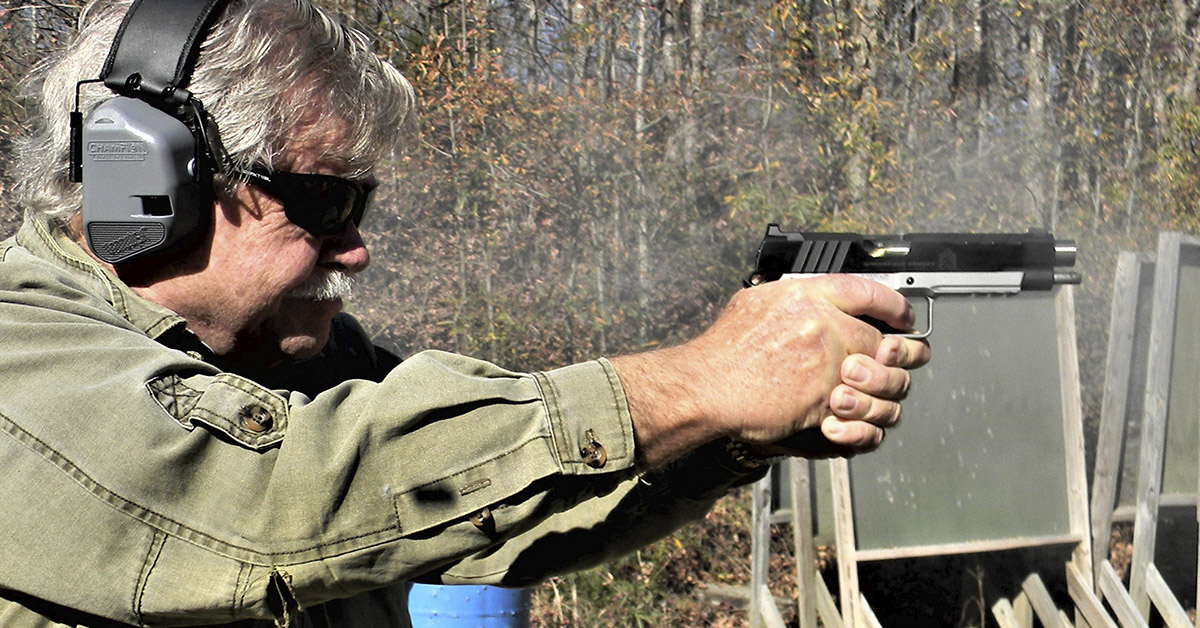 My long hours of training and muscle memory with the 1911 were appreciated when firing the pistol. There was no learning curve on the type; however, the specifics are different. This pistol isn’t quite the same as other 1911 handguns, and some adjustment is needed. The grip frame managed to measure out about 2/16-inch thinner than a typical 1911. This took some acclimation. The thinner grips make for an efficient carry gun. The grip isn’t compromised. The pistol has a good natural point and handles well in speed drills. I have not experienced any failures to feed, chamber, fire, or eject. Addressing man-sized targets at 5, 10, and 15 yards, the pistol exhibited excellent practical results. Firing at small targets at known and unknown ranges also provided satisfying results. 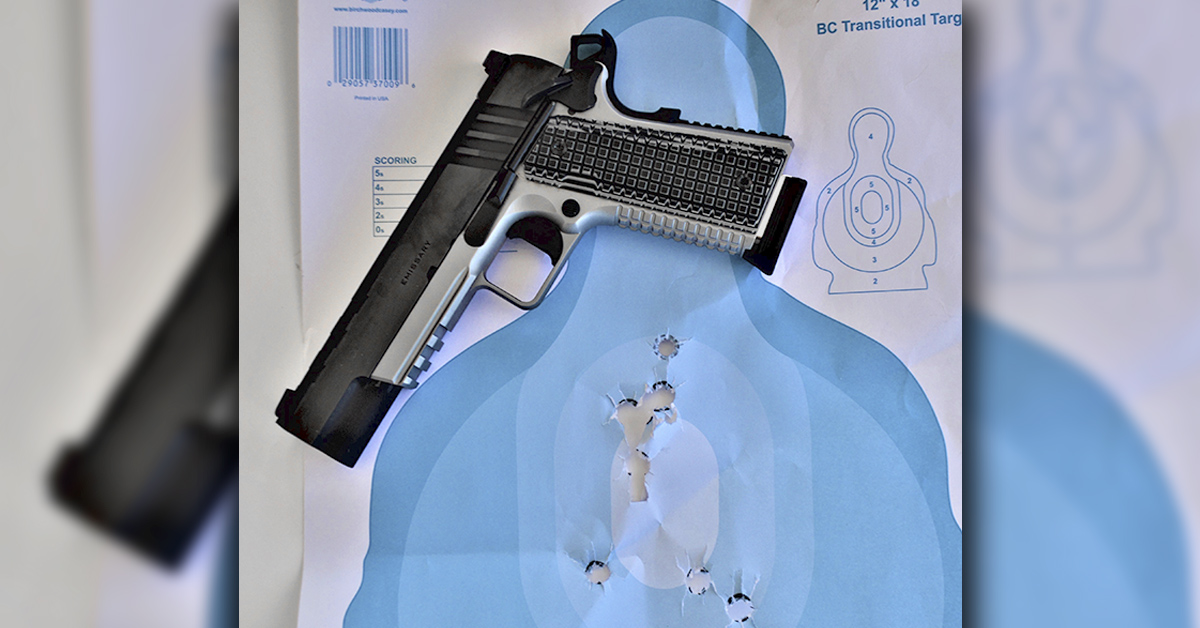 The sights are well regulated for 230-grain loads. I fired a mix of ammunition, including several lead bullet handloads. Springfield has produced a pistol that has less felt recoil than the average steel frame 1911. Subtle changes in the grip profile and a well-redesigned recoil spring assembly are part of the equation. Firing for accuracy at 25 yards, I used the MTM Case-Gard K-Zone shooting rest. This isn’t a realistic test of combat ability but it tells a lot about how the pistol is fitted. The locking lugs slide into a good tight fit, and the barrel is especially well fitted. With good sights and a crisp trigger, the pistol delivered pleasing results.

The pistol is accurate enough for many defensive chores, consistent with bullet weights in the typical .45 ACP range of 185 to 230 grains. The Springfield Emissary is a good performer, and it is a nice-looking, even distinctive, handgun that will serve you well for many years. 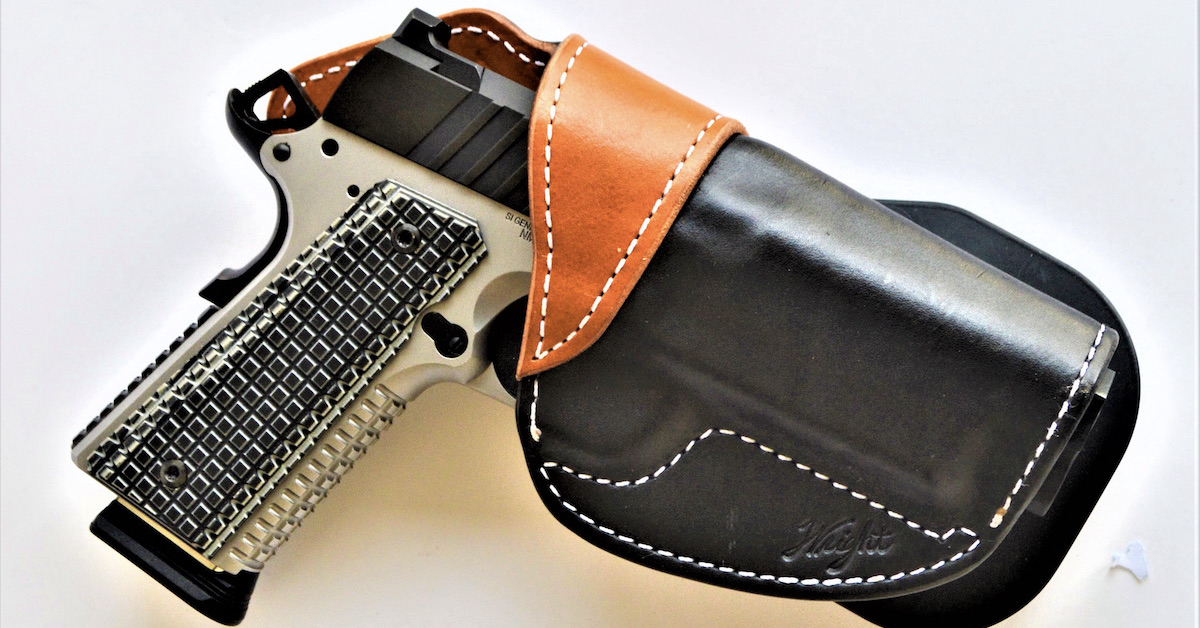 The Emissary generally fits 1911 holsters molded for a rail gun. The light rail is the same as most 1911 handguns; however, the trigger guard may create some issues with some of the more tightly molded rigs. I used the Wright Leather Works Outsider, wearing the holster at three o’clock. The holster has the capability for a straight drop or twenty-degree forward cant. A twenty-degree crossdraw cant-carry is also possible. This is a far more versatile holster than most paddle holsters and among the finest choices for all-around use. It is concealable with a covering garment. The Outsider also makes a fine range holster, and the Emissary is a good fit for it. The draw is sharp and reholstering is natural.