Let’s take a trip to the ancient oak hammocks of central Florida, where the line between fun and fright can be measured in seconds

Hunting Florida hogs is always an exciting adventure. Add dogs, handguns, and some adrenaline, and it can quickly become a heart-pounding rush with a side of fear.

The hunt was at Osceola Outfitters with Hoppy Kempfer and sons Sage and Case. To say these boys are experts on wild hogs is an understatement. They hunt year-round and will chase hogs with bows, rifles, muzzleloaders, handguns, and even knives. They always have a smile on their faces and a plan for finding the next big oinker. The Kempfers have an excellent setup for hosting hunters on their large tracts of land and have a knack for finding hogs under any conditions. In typical wild hog country, it isn’t unusual to run across an alligator, coyote, and, of course, Osceola turkey and white-tailed deer.

The extreme humidity hung in the air like a smothering blanket and the breeze wisped the Spanish moss hanging in the ancient oak trees. The climate can make a visitor feel lethargic, but it didn’t stop the crew from heading to the range to test the firepower and sight-in the revolvers. 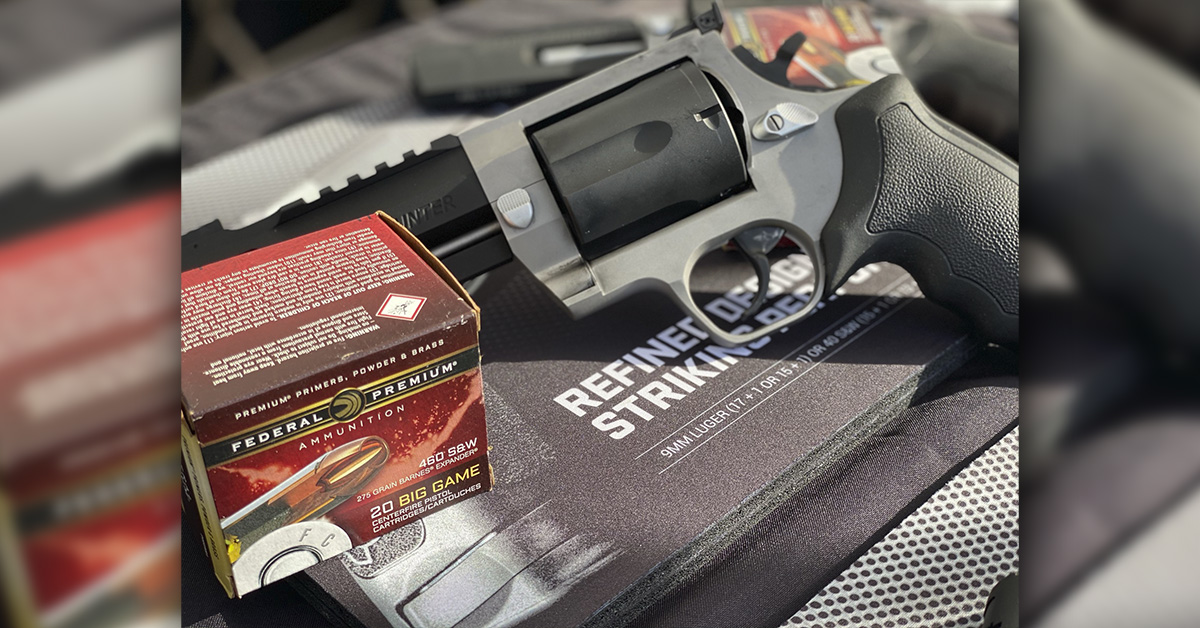 The Taurus Raging Hunter is an excellent option for hunting hogs, especially when you stand the chance of running into a rogue, giant boar. The most challenging decision of the day is deciding on what caliber is best suited for carrying, handling, fast-action, accuracy, and killing power.

A handful of hunters were hoping to get some exercise chasing dogs, hogs, and trying to keep up with the local long-legged boys. Taurus product engineers, journalists, and some outdoor industry professionals made up the crew.

The Taurus Raging Hunter is one of the most popular hunting handguns on the market today, as it is designed specifically for hunting purposes. It is available in popular hunting calibers, including .357 Mag, .44 Rem Mag,.454 Casull, and more. A Picatinny rail allows the user to incorporate a red dot, scope, or you can simply stick with the traditional open sights. The porting system helps reduce felt recoil in all calibers. The boar hogs in Florida often tip the scales at 250 pounds and having enough stopping power is essential. The handguns were fed Federal and Magtech hollow-point ammunition for destructive wounds at close range. 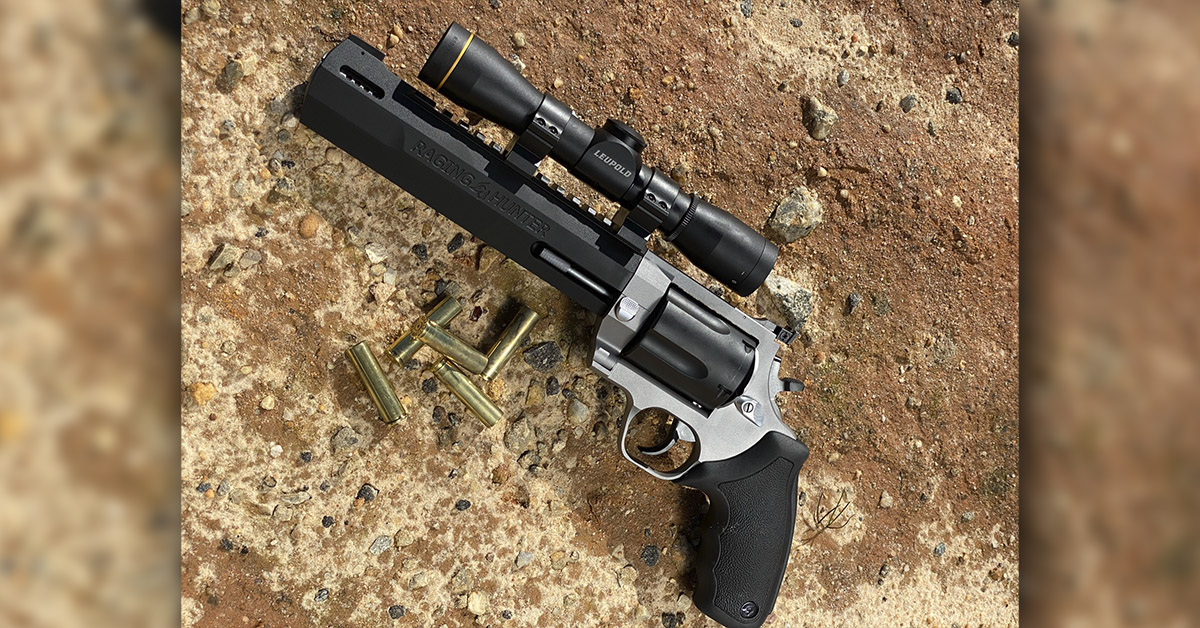 The Raging Hunter is a double-action revolver. The single-action has a crisp, clean trigger to maximize accuracy and confidence, while the double-action is fast and efficient for a follow-up shot. Under any hunting situation, this is an accurate handgun, making it versatile and dependable—something dedicated handgun hunters demand.

The cool morning breeze was welcome and provided an energy boost of enthusiasm. The sun wasn’t up, but the birds were starting to sing, crickets were chirping, and it wasn’t difficult to tell that the day was coming to life. Big hogs prefer the cover of darkness and the cooler temperatures, so getting an early start is always important. The Kempfer clan has some excellent strike and chase dogs, as well as a swamp buggy to stay mobile. The dogs can catch the scent of the hogs from the buggy, and the chase is on. The dogs were named Jip, Gin, Juice, Edith Frank Soot, Bump, Worm, Kami, and Kazie. Jip and Gin see most of the action and know hog hunting like their handlers, but at a much different level. 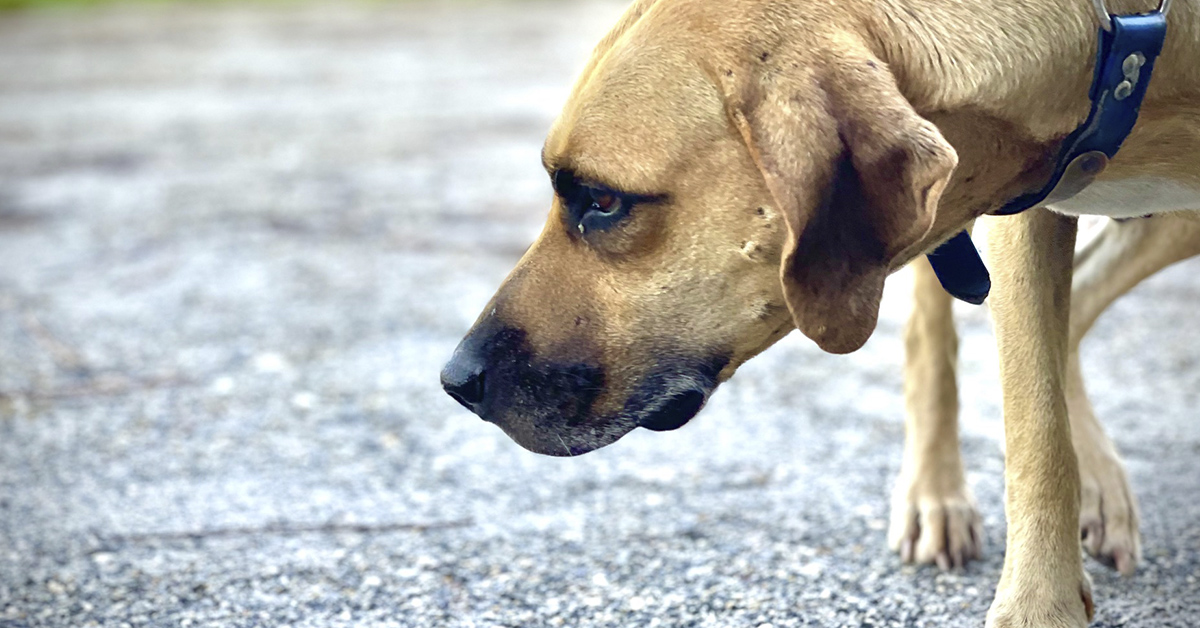 The dogs were dying with anticipation to start the chase, driving down the sandy trails. It is hard to fathom how they can pick up the scent of a hog that walked through the grass and palmettos hours before. There was some whimpering with anticipation, as they knew well what was expected and how they would spend their morning.

The sun was starting to rise into the eastern sky when the dogs went from keen to crazy excited. Hoppy pulled the buggy over, and everyone got out. The dogs were turned loose and immediately got after the scent. It is hard to comprehend how the dogs know which direction the hog was traveling without making a mistake. The dogs constantly communicate by barking along the trail, and the hunters try to keep up as best as possible. Some chases can take minutes, while others may take hours. There are many variables during the hunt, but the heat comes into play at some point. Occasionally, a hunt needs to be called off for the safety of people and dogs.

The dogs are great at letting the handlers know what is going on. Excited barks provide an auditory trail to follow, but when they start to close in on their prey, the dogs begin to bark even more aggressively. The tone and tempo pick up quickly. When a hog is bayed up, the sounds intensify as hounds and hogs battle for dominance. Meanwhile, the hunters continue to run through the tangle of saw palmettos to find the dogs and locate the hole the hog has backed into for protection.

The first morning chase was a half-hour buggy ride. The striker or scout dogs scented a good hog, and the pack was let loose. The five-minute run to locate the hog seemed more like a half-hour, but it wasn’t hard to determine where it was bayed up and screaming mad. Everything is done as a close encounter. The dogs are called back to protect them while positioning the hunter for the shot. 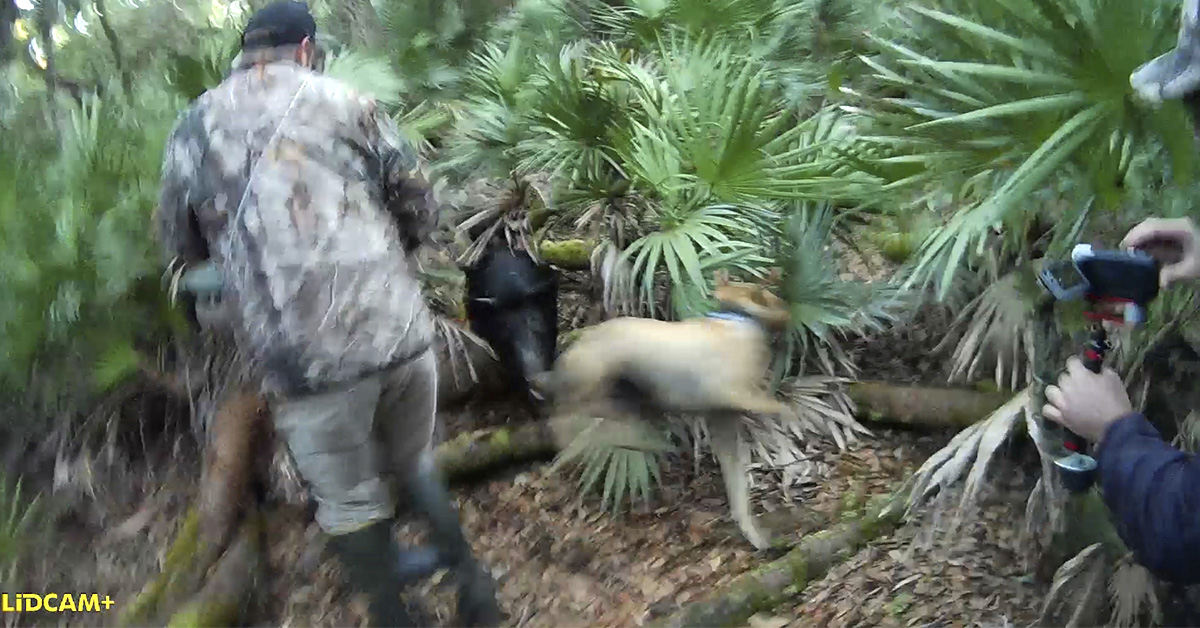 The young man doing the shooting had little hunting experience and moved in to face the screaming swine. Unfortunately, the first shot was a little far back, striking the squealer center of mass. The hog immediately focused on an escape and was not going to let anything stop its advance. One leap had the hog charging through the cover. The swine set its sights on the hunter, and in a split second, it was within inches of impact. Sage diverted the hog with a swift kick to the body in all the melee, redirecting the pig’s path right to the cameraman. A second later, the cameraman got knocked on his butt from the hog, and it took a bite out of his shin as it passed by. The dogs then followed, along with the rest of the hunting crew, baying the hog for a lethal shot to bring the entire rodeo to an end.

Everyone gathered to do a buddy/body check, and the cameraman had dental impressions and one minor cut on his leg, but a great war story to share about the adventure. In hindsight, he was lucky the hog was ONLY a sow and not a boar or a barr hog. 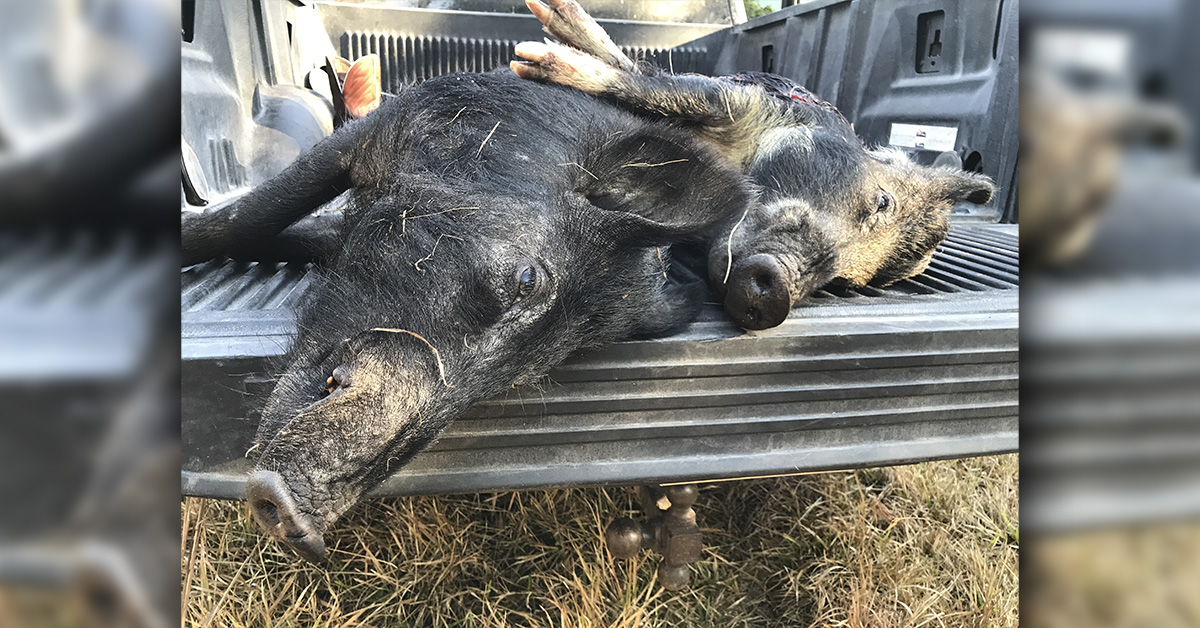 As the days progressed, the crew went on to harvest a dozen or so hogs without another incident, enjoying the hair-raising handgun action that is often up close, and personal. 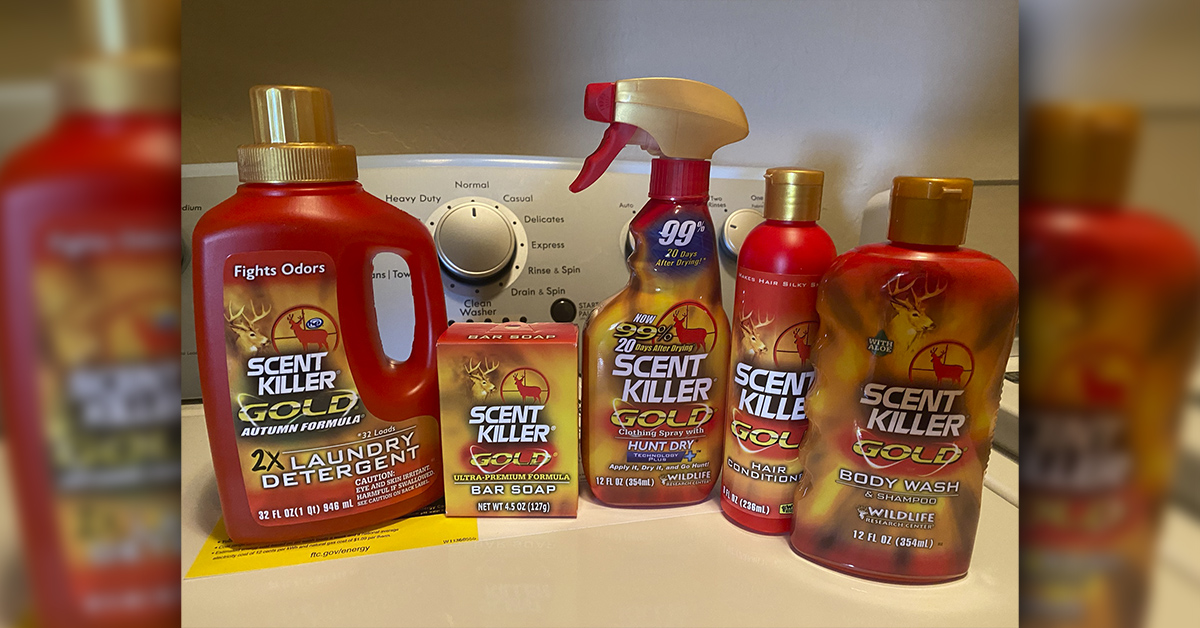 If you think dogs have a keen nose for striking the scent of a hog, imagine what olfactory senses an old boar has developed for finding truffles. Chasing hogs with dogs is one way of hunting, but spot-and-stalk and hunting from a stand or blind can also be effective and rewarding. Concealing human odor is paramount, and a complete regiment of Wildlife Research Center Scent Killer products, from laundry to personal hygiene, will help give you the edge. Stack the odds in your favor to be successful and do not leave anything to chance…or a hog’s nose.

Dryshod ViperStop boots are a natural choice for hunting in comfort and safety when in the swamps. ViperStop boots are manufactured with penetration-resistant rubber that gives the lower leg at minimum 16 inches of coverage. The boots have been third-party tested to protect from the fangs of a rattlesnake or other venomous snakes. It is best to avoid snakes, when possible, but protection is peace of mind. The rugged design also stands up to the punishment of saw palmettos. 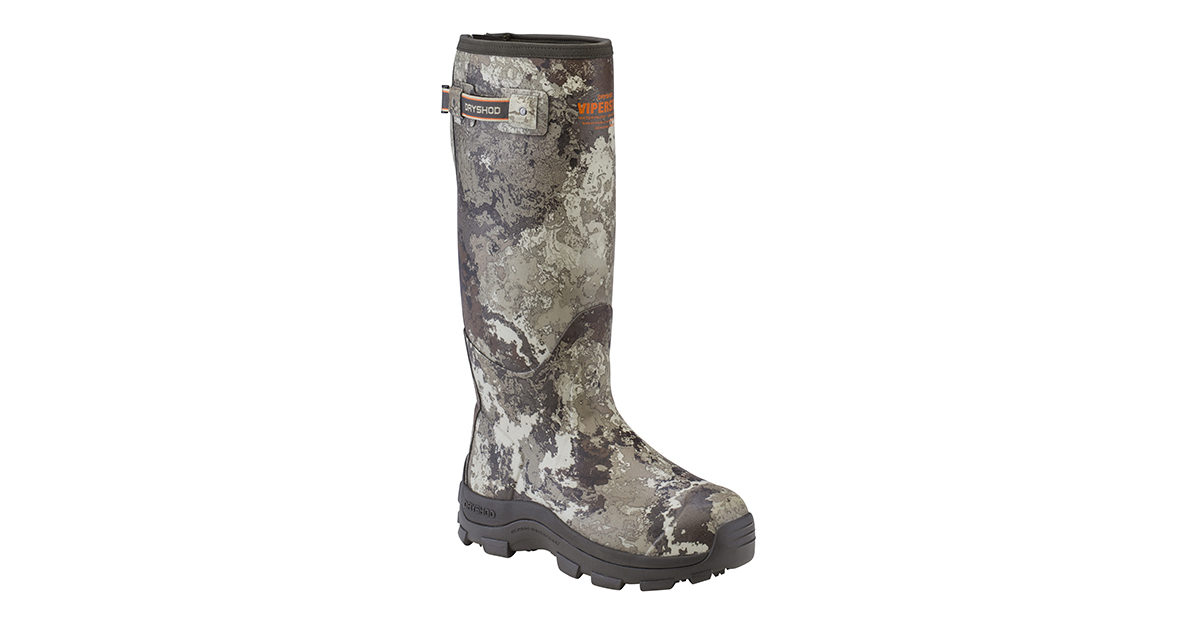 Dryshod ViperStop footwear is 100% waterproof and made with 5 mm of specialized foam. The boot is coated with a water-repellent seal that water rolls off in seconds. The material has 4-way stretch and is breathable with an air mesh lining. The boots are easy to pull on or take off and include a heel kick and back-pull tabs. Roll down the top to tuck in your pant leg or vent in warm temperatures. They include reinforced tuck board with rigid shanks for added stability, and best of all, slipper-soft comfort and sized to athletic-shoe standards. 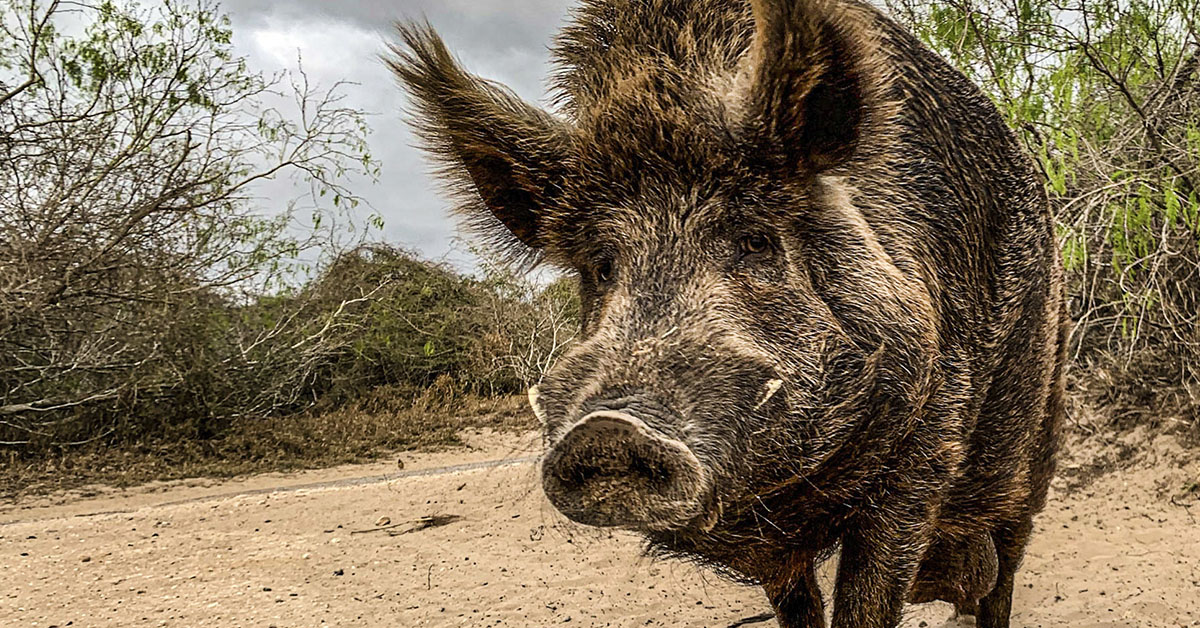