A few years ago, I made a pilgrimage to the hallowed ground of the Gunsite Academy training facility in Arizona, and I was there for the 260 Shotgun Class. I brought with me a couple Mossberg scatterguns — one being the 930 JM Pro model. To tell the truth, I did not see much wrong with the 930 as it was, because for three days it loaded, fired, and ejected shotshells in the desert sand and heat.

The new gas system on the 940 JM Pro will run up to 1,500 rounds before you need to clean it, and it will reliably cycle any type of quality factory-made 2 ¾ or 3-inch ammunition. A stepped and vented-spacer component has also been incorporated that keeps the gas system running fast by shedding any moisture or carbon build-up every time it cycles. Fifteen-hundred rounds (maybe more) between cleanings? That is impressive.

Loading is a major concern on a competition shotgun. In short, the shooter needs to stuff as many shells into the gun as possible in the shortest amount of time. The new 940’s loading port has been designed to allow the user to efficiently quad-load the magazine tube straight out of the box without any need of modification to the receiver. The elevator and shell catch have also been designed to eliminate common pinch-points.

A problem with many shotguns is they do not shoot where they are aimed. That is, the point-of-aim does not match the point-of-impact. Many of us don’t know this because we never pattern a shotgun on paper. Mossberg engineers worked on a a new barrel-making process for the 940 that ensures the consistent production of a platform that will allow a user to maintain an accurate point-of-aim/point-of-impact when utilizing quality factory-made ammunition. 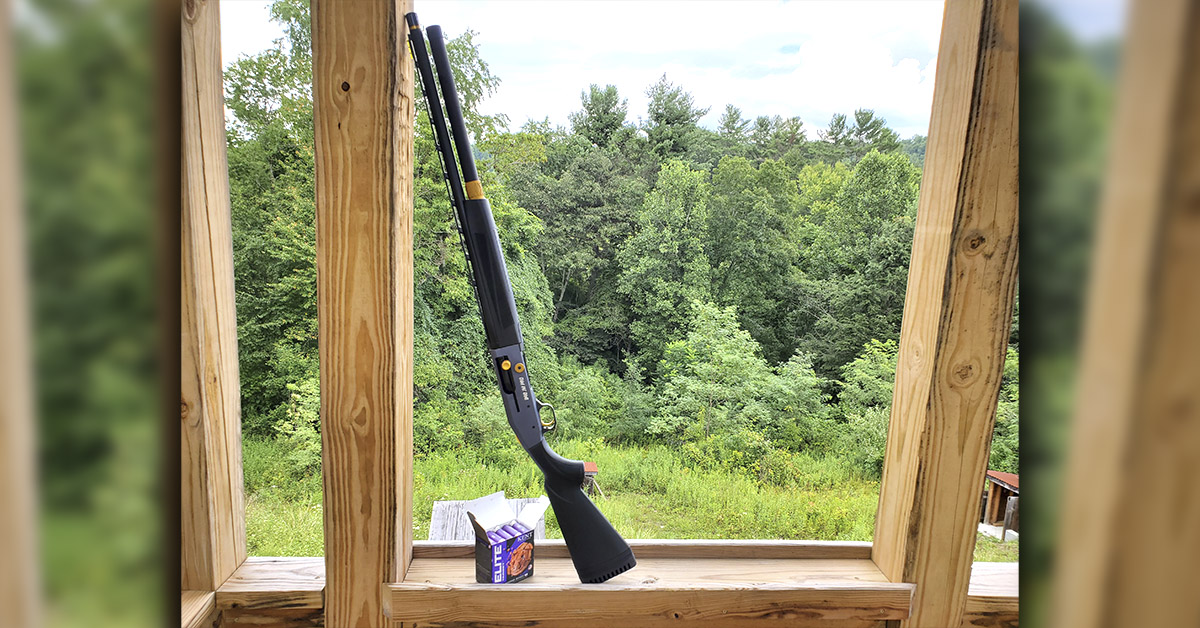 The 940 JM Pro was put through a rigorous shooting session with several brands of ammo (Federal, Remington, Aguila, Winchester, Kent, and Browning) of the 2 ¾- and 3-inch flavor. As I have mentioned before, hiding a few 3-inch magnum loads in a magazine of light target loads will definitely wake you up if you are getting drowsy on warm afternoon of shooting. The 940 handled them all with no problems. As usual when testing a firearm, the main issues I want to address are whether the gun goes bang every time I pull the trigger and if it functions, meaning ejecting, loading, and firing the next round. The 940 got an A+. 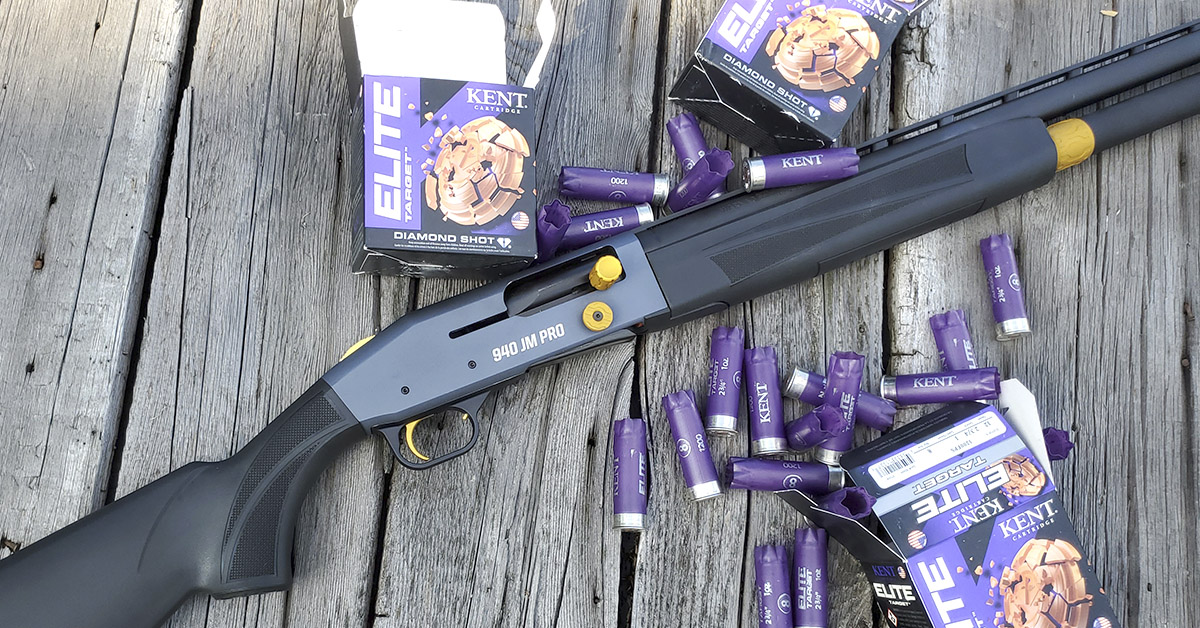 The 940 sports a slim profile and ergonomic forend and stock, both featuring Mossberg’s signature texturing that offers a positive, yet comfortable grip. The stock is completely user-configurable, delivering out-of-the box adjustability for length-of-pull (LOP) between 13 and 14.25 inches, drop, and cast. Being able to adjust the LOP that much is something important. As I think we have covered in these “digital pages” before, shooting a tactical or home defense shotgun is different than shooting clays. We are aiming and shooting at relatively stationary targets, and most of us need a shorter LOP for this. The receiver is anodized for durability and the controls (charging handle and bolt release button) are oversized. Internal components are nickel boron-coated for smooth, reliable functionality. The 940 JM Pro comes equipped with Mossberg’s Accu-Choke™ system, and ships with a set of Briley extended chokes (Cylinder, Improved Cylinder, and Modified) that come engraved with constriction for easy selection.

In truth, I didn’t think they could, but Jerry and Lena Miculek, along with the Mossberg engineers, improved on the 930 model. This shotgun shot like a house on fire, and it ain’t bad looking, either.

Right out of the box, you can take this shotgun and compete in any 3-Gun style competition. That means it would be ideally suited for home defense purposes as well. 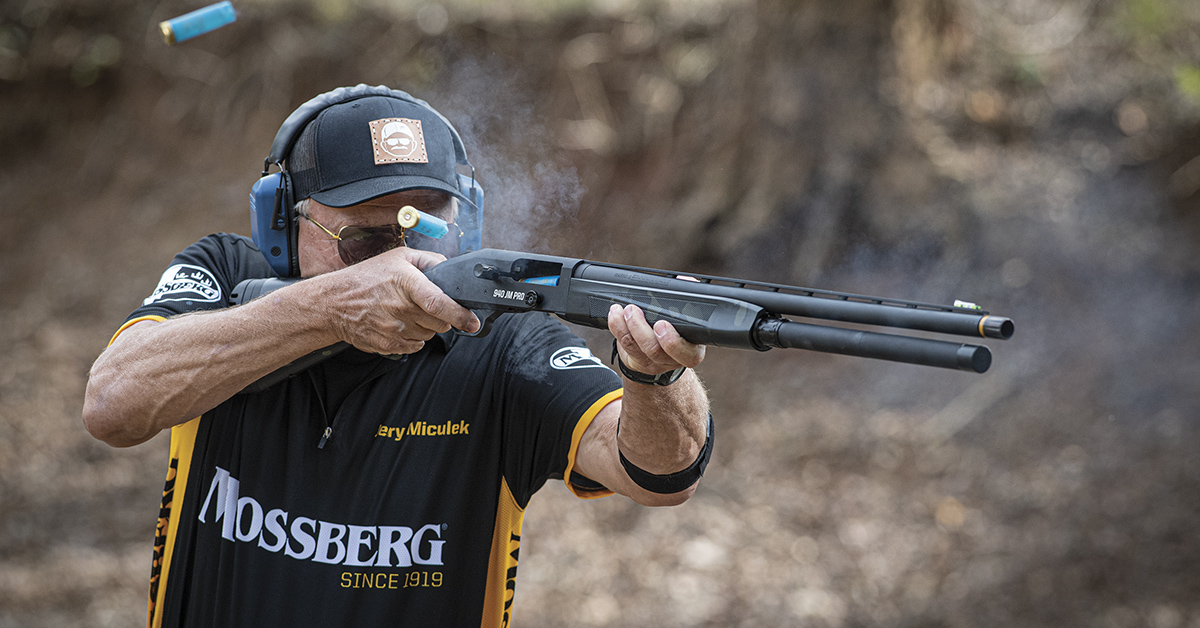 Considerations for the Defensive Shotgun

Arguably the top choice for all-around defensive performance, the shotgun presents many po…