It may seem like an odd pairing, but this hunter put Franchi’s newest bolt action rifle in 6.5 Creedmoor to the test with Aimpoint’s steady performing Micro H-2.

The truck slowly rolled to a stop on the edge of the large sandhill. We immediately raised our binoculars to scan the landscape below. The Nebraska Sandhills is an almost mythical place where wildlife can appear out of nowhere and disappear just the same. Scott Fink with Goose Creek Outfitters knows the land well, and the mosaic of irrigated cornfields and native grasses was like an oasis for deer. The landowner had told us about a big mule buck that magically appeared from the hills every evening to slip into the corn for dinner. We did not see the buck so drove to a new position to check more ground.

Glassing the rolling hills and fingers that led to the agricultural fields, we hoped to find deer bedded or on the move. A shelterbelt about 300 yards away looked promising, and seconds after we stopped, Scott excitedly pointed out a big whitetail buck stretching its neck to get a look at us. 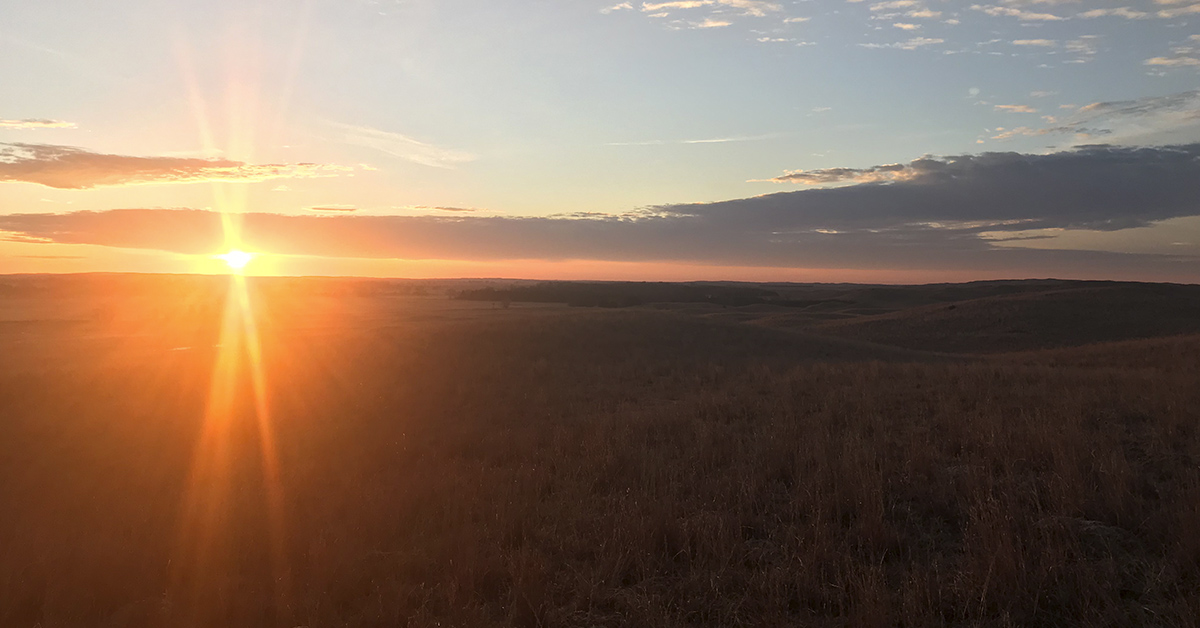 The deer was bedded in the shelterbelt, and when it raised its head, the ten symmetrical points on its antlers stood out like a neon sign. A doe stood up behind the buck but, after a few minutes, settled back down. Scott and I looked at each other, knowing we were caught flatfooted in the open. We hatched a plan to wait until the deer put his head down, then we would slowly open the truck doors, slink to the ground, and bellycrawl to a knoll about 70 yards away. From there, we could work our way through the grass and cover to get into shooting position.

The hunt had started two days earlier when I sighted in a new Franchi Momentum rifle at the range. I had never shot a Franchi rifle and was impressed by the fit and feel. The firearm shot perfect groups to raise my confidence. I had hunted with Scott the year before and shot a buck on a dead run as it busted from a draw deep in the Sandhills. I could not get the image out of my head and changed my optic to an Aimpoint Micro H-2. The 2 MOA red dot allows for quick target acquisition. It was a strange choice for an open country hunt, and to make things even more eclectic, I was shooting a 6.5 Creedmoor. One of my friends in the camp said, “Brad, only you would put a red dot on a long-range 6.5 Creedmoor.” 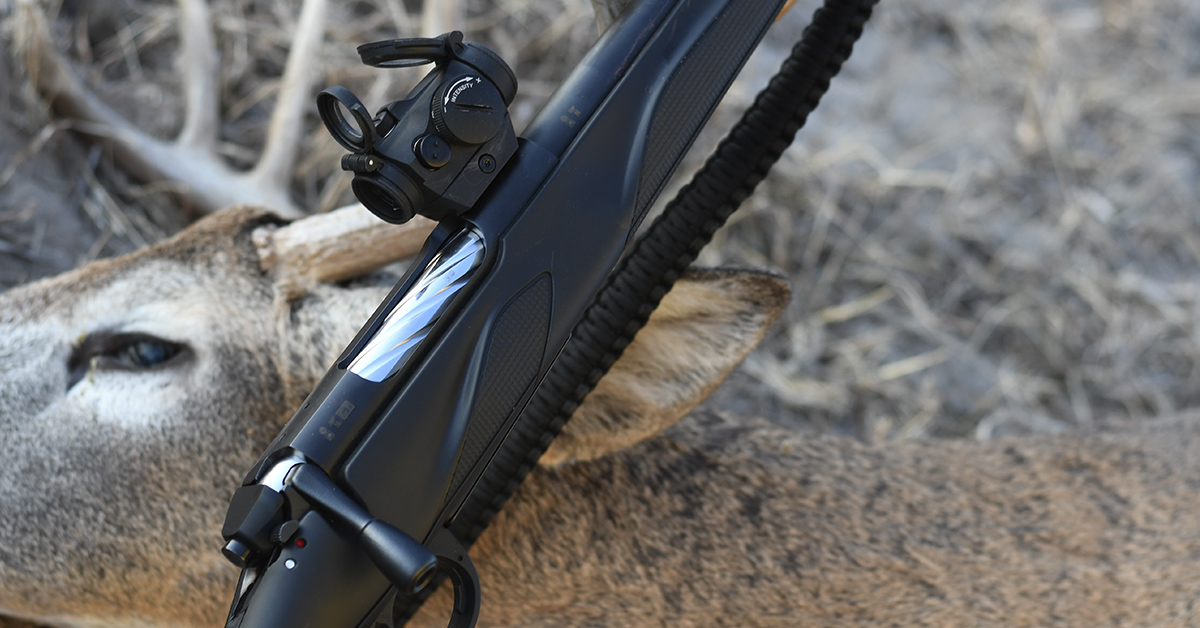 It might have been a strange choice, but it made sense to me. The rifle was extremely accurate, and I had no problem shooting accurately to 300 yards. The way I looked at it, I was good for up close and personable, on the move, and at longer ranges that should be easy to achieve with a well-thought-out stalk.

Scott and I got comfortable, and I set up my shooting sticks to wait out the buck. I was now faced with the exact scenario I had thought of with a deer bedded 170 yards away. If all went as planned, the deer would present a shot before running from cover. Either way, I had him covered.

With the Momentum seated firmly on my shoulder, I held steady to hold the red dot on the fence post in front of the deer. The practice helped put my choice into perspective, as I knew I could drill the post, which was much smaller than the kill zone of the deer. 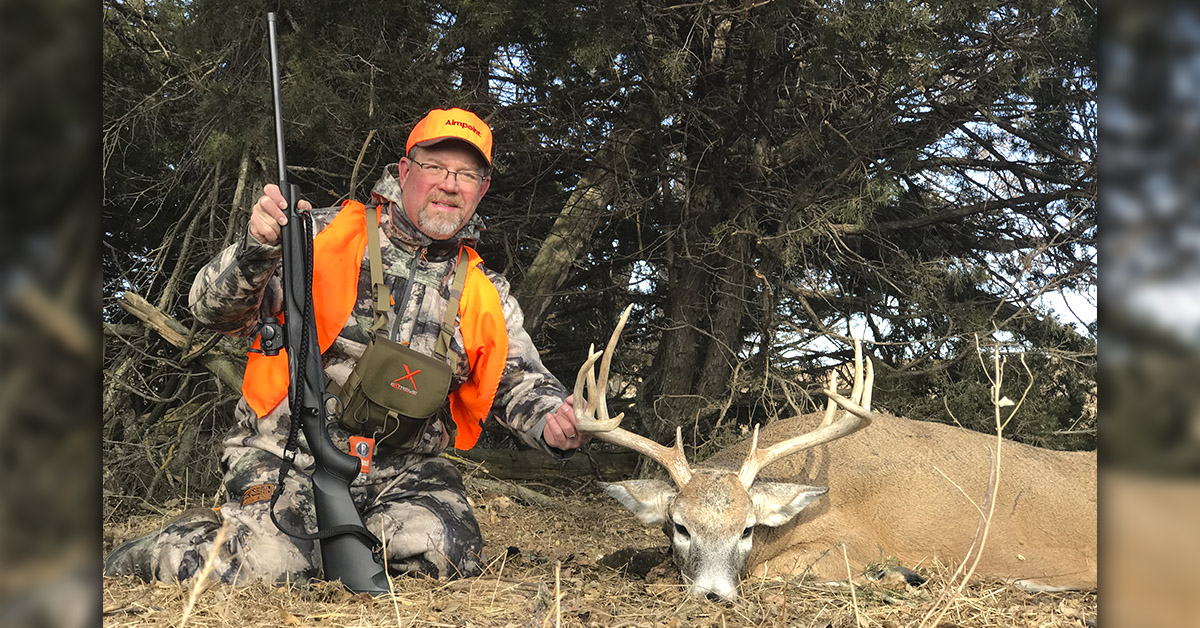 The rut was in full swing, and the doe was acting rather randy, which could play in my favor or blow the entire stalk altogether. The cold prairie wind was starting to bite through my layers of clothing when the doe stood. Scott sat up and strained his eyes through his binocular. His steady attention reminded me of an excellent pointing dog that had found a bird. I anticipated where the buck would stand, and as though the hunt was scripted, the big boy raised from his bed. The grass and tree limbs made it challenging, but I followed every movement of the buck with the red dot, ensuring the rifle was dead on the kill zone. Scott cued me to get ready as the buck approached a small clearing. The buck disappeared at the rifle’s report, and the doe made a speedy exit from the cover without her suitor in pursuit.

Successful hunting stems from confidence and accuracy in a firearm. I had never shot the Franchi Momentum before but knew I could make it perform to its fullest capability. Some think I was crazy putting an Aimpoint on a flat shooting rifle, but it worked.

Franchi has upped the game with the introduction of the Franchi Momentum Elite. It is the next generation in the Momentum line that will bolster the confidence in any shooter. Here’s why.

The Italian-made rifle is tagged with superior ergonomics and feel. Anyone who has done much hunting or shooting will understand why the fit and feel are so important. When you close your eyes, shoulder the rifle, then open your eyes again, the sight is perfectly aligned without adjustment.

The advanced ergonomic stock is the backbone of accuracy. It allows the shooter to be as accurate as the firearm and components. The Relia trigger is a big part of consistency. It is an adjustable, single-stage trigger the user can customize to break cleanly between 2 and 4 lbs. The TSA recoil pad is well thought out with rounded edges that do not catch clothing when the rifle is being mounted. Moreover, with recoil reduction up to 50%, it is a game-changer. 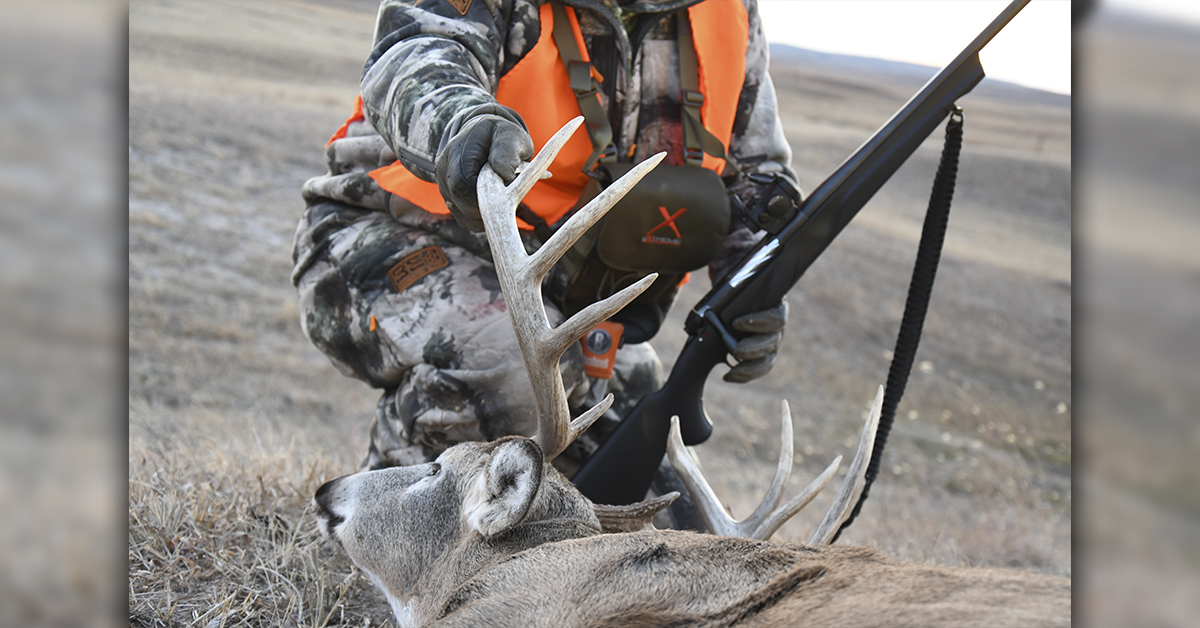 The Momentum Elite is available in the EXCAPE pattern from Realtree, the Elevated II pattern from OPTIFADE, and in the versatile True Timber Strata camo. The rifle features include a cold-hammer-forged, chrome-molybdenum, free-floating light contour barrel. The fluted chrome, 3-lug bolt is easy to operate with a short 60° bolt throw. Durability and curb appeal are provided with a Cerakote finish on the barrel and receiver. Additional added features include a detachable box magazine, a muzzle brake, and a one-piece Picatinny top rail. 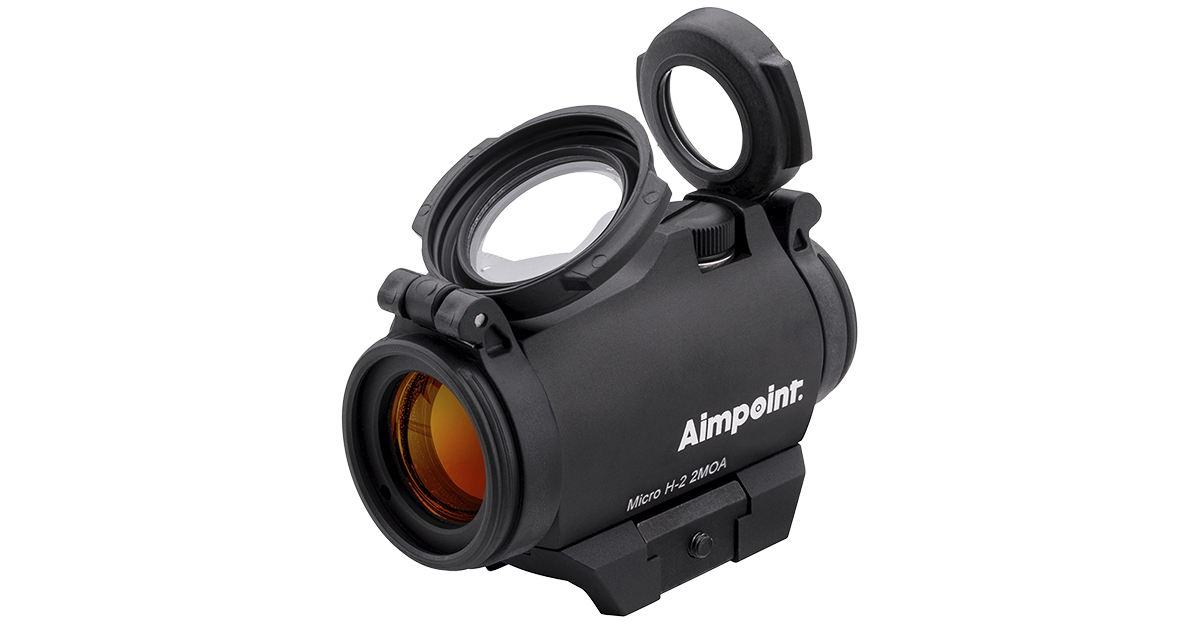 The Aimpoint Micro H-2 offers a quick reference point to ensure you get on target fast and with consistency. The sight features a 2 MOA red dot, and if it isn’t obvious, it represents where your bullet will be delivered. The sight can be placed at different points of the Picatinny rail or mounting system, eliminating any issues with eye relief. The Micro H-2 is easy to mount and to adjust for dead-on accuracy. The Aimpoint Micro H-2 could be the perfect tool for anyone having trouble centering a scope on target. It can also be great for people with vision problems, but the bottom line is you won’t know the advantages until you try one. Seeing is believing, and optics are all about clarity and increasing accuracy 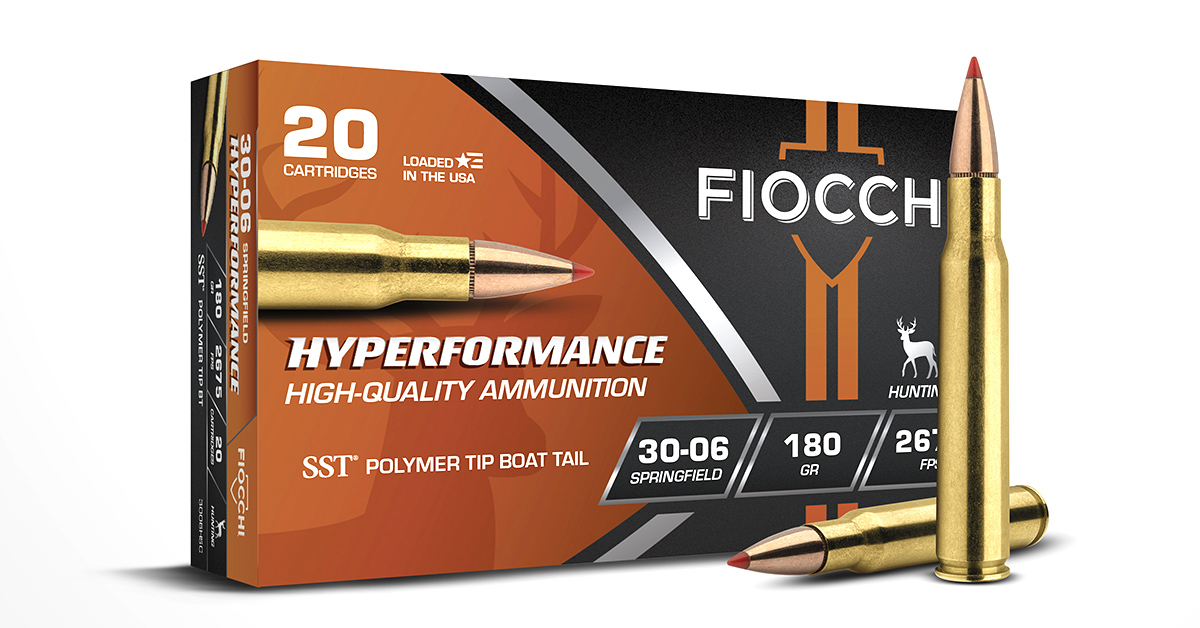 Accuracy and performance are also tied to the ammunition used on a hunt. The Franchi rifle used on the hunt shot excellent groups with the premium line of Fiocchi Hyperformance Hunt. I required maximum bullet performance at short and long-range and was not disappointed. The selection of high coefficient, flat-trajectory bullets are critical components engineered for controlled expansion and maximum weight retention across a broad range of velocities. The consistency provides hunters the assurance of terminal performance on any big game animal. Available in most popular calibers.