When your life is on the line, the back-to-basics approach to handgun sight alignment wins the day

In the simplest of terms, all it takes to hit your target with a pistol is to hold the front sight on the center of the target while you press the trigger without moving the gun or disturbing the sight picture. Nonetheless, as any experienced pistol shooter knows, the aforementioned is often easier said than done.

Several years ago, I had an acquaintance of mine say he did not like the new, modern large sights on handguns because, as he put it, “they get in the way.” A completely different person informed me that he did not like the “big dot” tritium sights because they stood out too much and, again, his words, they “were too distracting.”

When confronted with such logic, it is best to go all the way back to the basics—to the beginning—and consider just why sights are on guns in the first place. 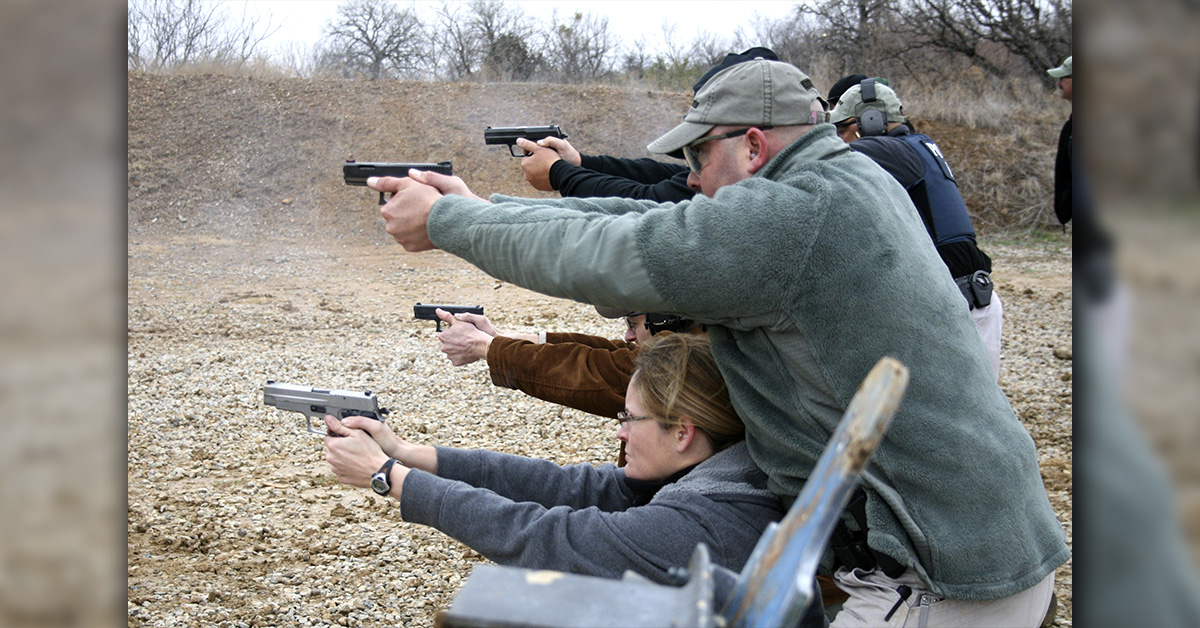 Historically, the very first muzzleloading firearms were rudimentary steel tubes lashed to wooden sticks; they had no sights. As the firearm evolved, men decided the best method for hitting their target was to put some form of grips and stocks onto the guns. At close distances, the shooter just held the barrel in the direction of the target. It did not take long for men to understand that in order to put the bullet/projectile onto a specific spot, not just the general area, they needed to ensure that the muzzle was in direct alignment with where they wanted to hit.

Of course, the shooter cannot see the muzzle; it is at the front, facing the target. At first, the barrel makers simply beat, pinched, and hammered a small amount of the barrel steel directly above the muzzle at the front of the barrel to give the shooter a reference point. As time progressed, front sights became more advanced, using beads of steel, brass, and even gold, in some cases. Tall metal blades were combined with rear notches to assist the shooter in keeping the bore of the gun aligned with the target.

And so, going all the way back to the origins, the purpose of the front sight is to tell the shooter where the muzzle is indexed. The rear sight fine-tunes the process. Without sights, shooting is close, but not exact. We want to be as exact as possible as we are responsible for every shot and every projectile.

Sights: Colored or Not?

Recently, we at Student of the Gun received a new model handgun to test and evaluate. My son picked the gun up from the FFL dealer and reported back to me on the phone. “The gun looks good, but the sights are crappy.” he stated. To which I asked, “What’s wrong with them?”

“They are all black, front and rear,” my son replied. I had to laugh and then explain to my boy that every handgun used to come with all-black sights.

It has been during the last generation that manufacturers have started putting colored and Tritium front sights on handguns from the factory. When I joined the Marine Corps in 1987, we were still being issued the M1911A1. I carried one for two years before changing to the M9 Beretta. The sights on the venerable old M1911 are the same color as the slide finish and tiny by today’s standards.

We have come a long way and most shooters now realize that finding/seeing the front sight is a good thing. Finding it fast is even better. How do our eyes find/locate the front sight rapidly? We make it stand out from the gun somehow. White, Safety Green, and bright orange are some of the preferred colors for front sights. Add the self-luminating green glow of tritium and you have a sight that shows up in all light conditions, not just sunny afternoons on the range.

A few years ago, I was asked by the Night Fision sight company to design a set of sights for a fighting pistol. If you are looking for much greater depth on the process, you can take a look here.

The most serious use of a handgun is a self-defense scenario. Life and death are on the line. Not just the lives of the defender and the attacker, but the lives of any innocent person who happens to be in the general vicinity. As good guys, we must ensure that our rounds go only into the threat—not family members or the neighbors.

Lethal force encounters—threats to your life where you are forced to use a gun—take place in mere seconds. A few seconds of hesitation on your part can cost you your life. This is simply cold reality. The question then becomes, how do we move fast enough to hit the threat without moving so fast that we miss? One of the methods I have used to teach people is called the “Go Code.”

The “Go Code” is an indication to your brain to send the nervous signals to your trigger finger to press down and make the gun fire. In the adrenaline filled, time-distorted encounter that is a deadly attack, the Go Code you are looking for is the front sight of your handgun indexed directly over your target/threat.

When your mind tells you there is danger, your eyes will fixate on the threat. If this is a deadly threat requiring you to use your gun, what your eyes and brain should be looking for is the front sight of your gun as it appears over the threat. This is your instant assurance that the muzzle is where it should be, and you are clear to shoot.

Naturally, all that I just wrote will be taking place for you in fractions of seconds. With training and practice, you will be able to see the target, draw your gun, find the go code, and put rounds where they need to be without endangering innocent people to the left or right.

The Sights Don’t Shoot the Gun

While the subtitle might seem pedantic or over-simplistic, sometimes you need to remind people that the sights don’t shoot the gun. I have heard people say, “I need to buy better sights to make my gun more accurate.” This is when we must go back to the beginning. Sights indicate how the bore is aligned and where the muzzle is indexed. Sights do not make a gun “more accurate.”

If you want to hit the target reliably, every time, all the time, you need training and practice with that gun. Good sights will aid you in this endeavor, but they do not make up for a lack of skill. To go a bit old school on you; $200 sights cannot make up for a .50¢ trigger pull. For the sights to do their job, you need to hold the gun completely still for that moment it takes for the hammer to strike the primer.

That, my friends, requires dedication on your part.

As Professor Paul explains, rapid, on-target placement of the front sight is the key to neutralizing threats with a handgun in a close-quarter, fractions-of-a-second-count defense condition. Therefore, he rightly stresses the importance of a highly visible, can’t-miss-it front sight that promotes the “Go Code” theory.

When upgrading your handgun sights to ensure you win a close-quarter engagement, you should also give serious consideration to the style of your rear sight.

There are two basic styles of rear sights.

First is the standard square notch or U-notch (left) that most shooters are familiar with, and which promotes centering the front sight in the notch (windage) and leveling the top of the front sight with the top of the rear sight (elevation). This is a proven sight configuration, obviously, for close-up defensive situations, and is an essential system for more precise sight alignment when shooting at longer distances or when engaging in target practice.

Second is the V-notch or “express” style rear sight (right). Here, the rear sight is simply a shallow “V” in the rear sight blade. Sight alignment comes by settling the round front sight into the rear sight valley. The purpose of this system is to provide even faster sight alignment than the traditional square or U-notch style sight in a high-stress, close-distance engagement.

Here is the shooter’s view of the Lightwave H3 Express Tritium sight from HIVIZ Shooting Systems. As you can see, the express-style sight offers high visibility of the front sight with just a hint of a rear sight alignment point to get the job done. You can also tell from this view that express sights are not designed for precise sight alignment at longer distances because the rear sight alignment reference is “soft” compared to the “hard” alignment points of a conventional notched rear sight. 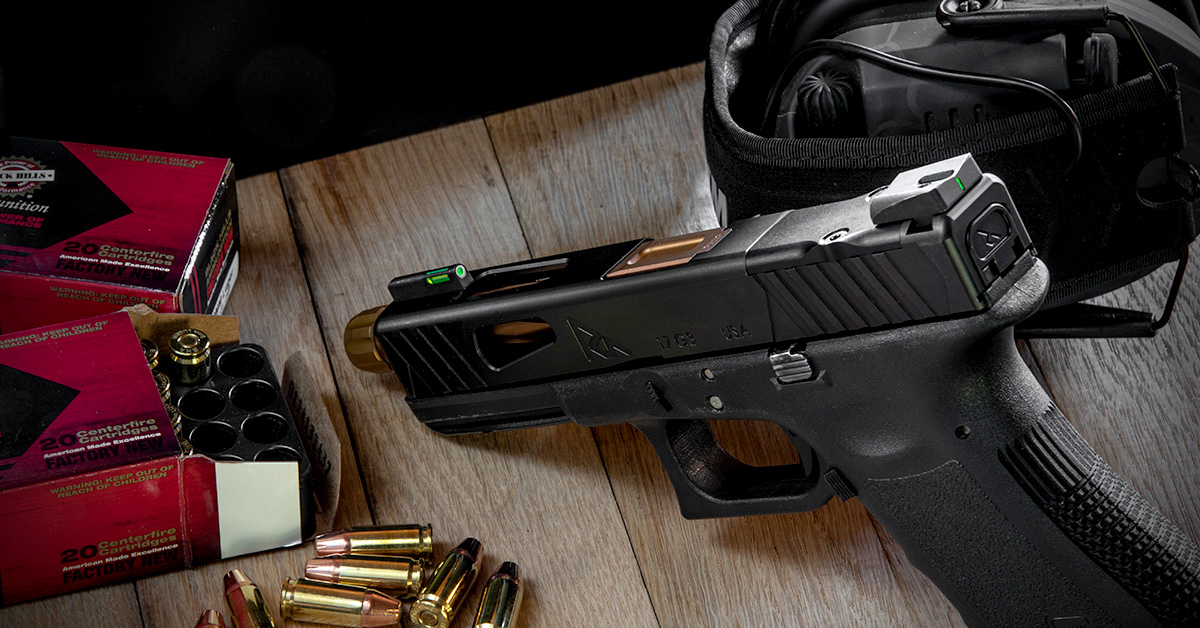 In our highlighted examples of the Night Fision SOTG Accur8 sight with the square notch rear and the Lightwave H3 Express Tritium with the V-notch rear, both include tritium elements in the rear sight for low light conditions where the rear sight profile may not be visible enough to allow proper sight alignment. This is one of the reasons we recommend upgrading any defensive handgun to tritium sights. As for the rear sight style, the choice is yours.

Experiment and discover which works best for you. —Rob Reaser