While I must admit to a slight bias in EDC handguns (I have three different models I carry, depending on my daily dress and destination), here at Shoot On, we always try to play it down the middle when reviewing any new product. That’s our job. That said, I confess that the Springfield Hellcat I acquired a year after its launch in 2019 is my most frequently carried firearm today. It is light, easy to conceal, perfectly comfortable in hand, fast to reacquire a target, and impressively accurate.

Naturally, when I learned that Springfield Armory had decided to expand the Hellcat line to include an all-new model called the Hellcat Pro, I became both excited and intrigued. Excited because I had already developed an affinity for the Hellcat and couldn’t wait to see what Springfield’s designers could have cooked up to make a good thing even better. Intrigued because…well…same thing.

As many of you who have spun around the sun more than a few times already know, most “upgraded models” or “improvements” in the consumer segment are anything but. We always joke about how, growing up, our parents or grandparents had the same appliances for what seemed like decades, and they just kept on going. The “new and improved” items that came later — basically lower-grade variations on a theme — never lasted as long and often never performed as well as their predecessors. Think higher margins for the manufacturers and “planned obsolescence.”

Fortunately, the world of firearms suffers no such shame. Everything does get better. An old issued military 1911 from way, way back in the day, for example, had much room for improvement, hence the growth of the 1911 performance and aftermarket industry. Buy even a bare-bones MILSPEC pattern 1911 today and you can tinker around the edges, but you really don’t need to. Modern materials and manufacturing processes are that good. 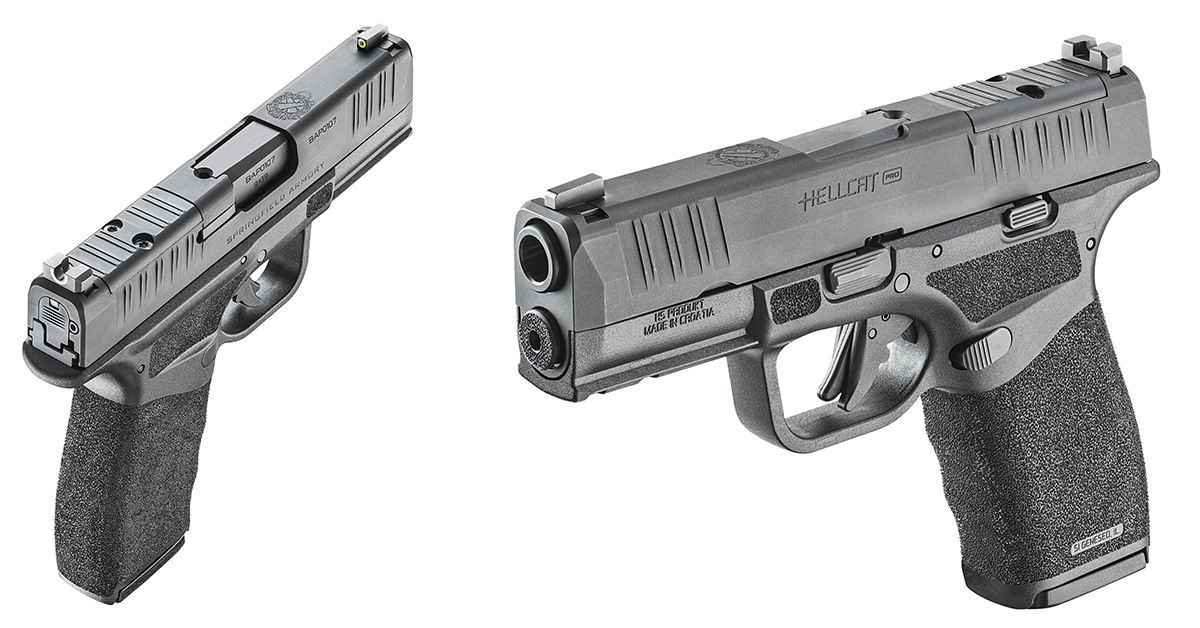 So, back to the new Springfield Hellcat Pro. This is a new model with a new frame and a new barrel and a new slide and all that makes for some significant differentiations between it and the original Hellcat. Significant differentiations, yes, but not significantly different. You see, the Hellcat Pro is essentially the same as the Hellcat, only a skosh bigger. The new frame delivers a longer grip that now accommodates a 15-round double-stack mag full of 9mm Luger. That longer barrel ratchets accuracy up a notch, as does the slide’s longer sight radius. The extended frame (to support the longer slide assembly) stretches out the accessory rail to provide greater compatibility for tactical light systems or lasers, if you are so inclined.

In short, the folks at Springfield didn’t change a good thing; they just made a good thing better for those who favor a slightly larger pistol than a micro-compact along with the benefits that entails.

Except for the absence of the proud relief behind the Hellcat Pro’s mag release and the aforementioned longer frame and grip length, the new model is simply an upsized version of the original Hellcat frame.

The Hellcat Pro’s grip works well for a broad range of hand sizes. Its slimline profile (a mere inch in width) allows for a solid, confident purchase even for those with smaller hands. The grip’s distinctive four corners (versus an excessively rounded grip profile) further add to the purchase quotient. Compared to grips with more rounded corners, the Hellcat Pro’s squarish grip goes a long way toward keeping the gun properly aligned during recoil and facilitates faster sight picture reacquisition. The beavertail is ample for a gun this size, further promoting stability and ensuring that even pudgy-handed shooters won’t suffer “slide bite” from this compact pistol. 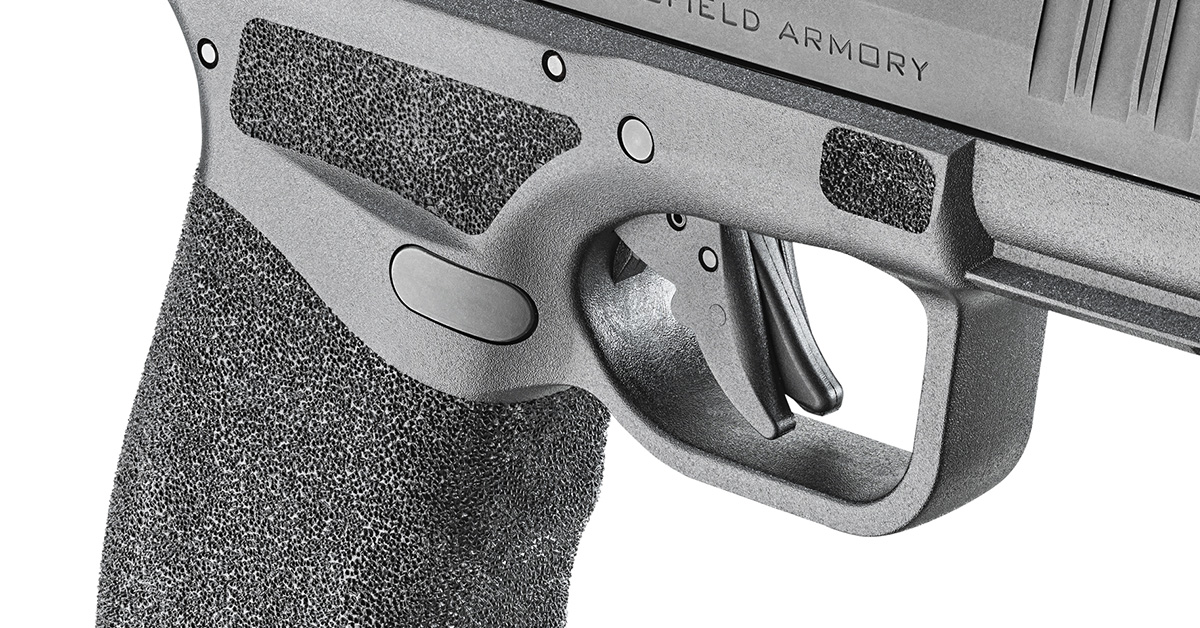 The Hellcat Pro’s grip texture is another high point. First, the texturing is not “patched.” Rather, it covers the grip’s circumference from the beaver tail and trigger guard all the way to the magazine floorplate. Springfield calls this an adaptive grip texture. That’s a bit of a misnomer as the texture doesn’t adapt to anything. A more accurate description might be “dual texture” as the stippling is comprised of what the manufacturer calls staggered pyramid shapes of two different heights. The taller protrusions have flattened peaks to prevent skin and clothing abrasion. If you’ve ever worn an aggressively textured pistol inside the waistband, you’ll definitely appreciate this. When it’s time to really get your grip on, the smaller protrusions take the lead. These pyramids have sharper points to provide enhanced traction for your hand or gloves. Whatever the case, this texture finds that just-right balance between too much and not enough friction. I shot the Hellcat Pro both barehanded and with gloves, and the gun never moved, even during rapid fire. 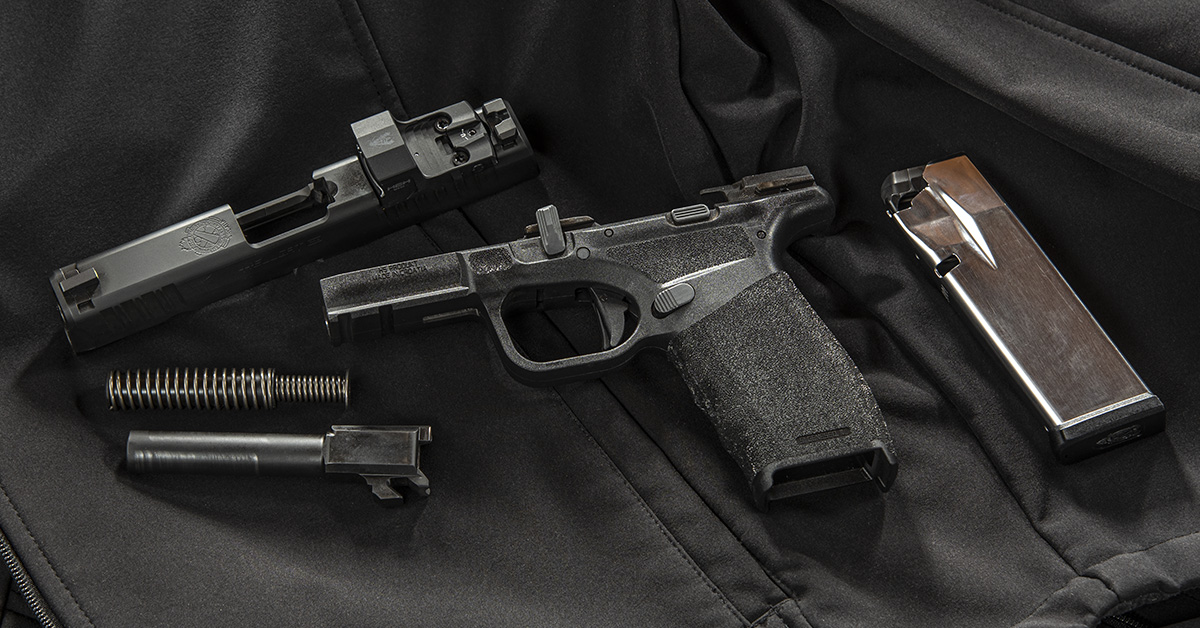 The Hellcat Pro barrel is hammer-forged with a 1:10 twist rate. The length is 3.7 inches, which is nearly 3/4 inches longer than that of the Hellcat. That may not seem like a large distinction, but even short hops along the barrel length scale can have a positive impact on accuracy and terminal performance. Springfield adds a Melonite finish to bolster wear- and corrosion-resistance.

Field stripping the Hellcat Pro requires no tools. With the mag out and no cartridge in the chamber, lock the slide back, rotate the slide disassembly lever 90 degrees clockwise, move the slide forward, pull the trigger, and remove the slide from the frame. Inside, you’ll find a familiar striker-fired pistol landscape along with a robust dual captive recoil spring and full-length guide rod. Lubrication maintenance is limited to four points: top of the barrel chamber, top of muzzle, and the rear of the slide railways.

With the gun field-striped, left-handed shooters can easily reverse the magazine release, should they choose to do so.

The Hellcat Pro slide follows the same pattern established by the original Hellcat. Edges are rounded or beveled to facilitate holster work and sharp but modestly pronounced front and rear serrations provide ample purchase for slide manipulation. The serrations even extend to the top of the optic cover plate for use by those utilizing open sights. 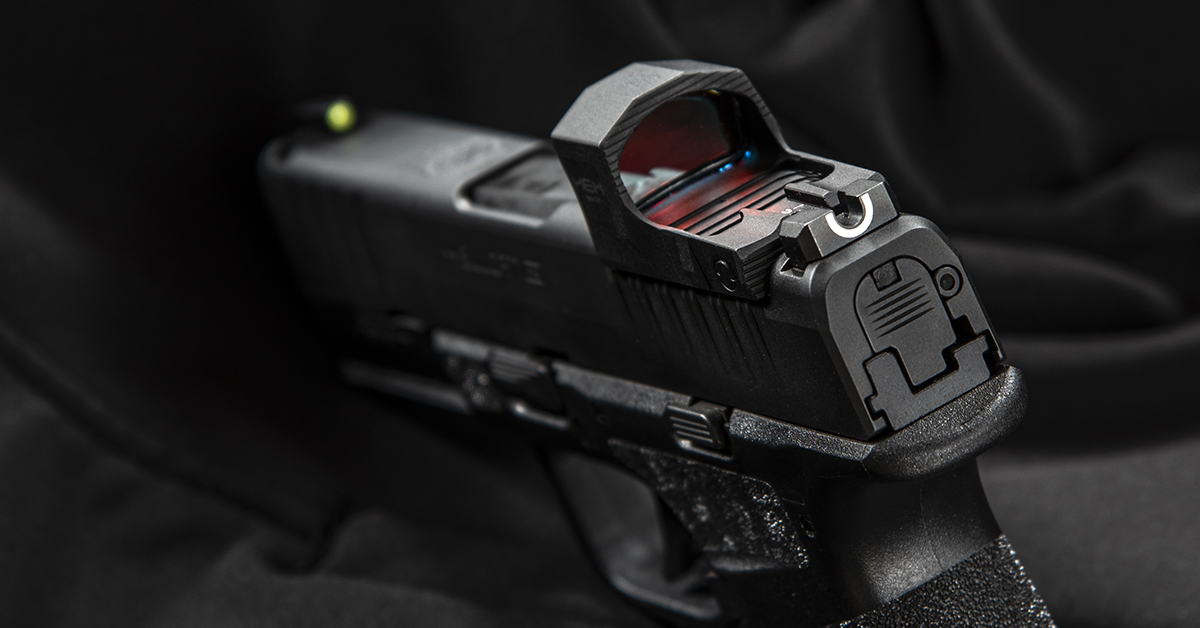 Speaking of sights, the Hellcat Pro delivers options. A tritium/photoluminescent ring front post and Springfield’s Tactical Rack U-Dot rear sight system comes standard. This is what I run on my Hellcat, and I love it. Sight picture acquisition is wicked fast across most light conditions because the U-notch of the rear sight blade, with its white horseshoe outline, and the high-visibility tritium/photoluminescent ring of the front sight more easily and quickly come to alignment for me than does the standard square front post and square notch rear style sights. To each his or her own, of course, but for a close-range defensive handgun, I find it hard to beat.

Of course, the Hellcat Pro comes with Springfield’s OSP (Optical Sight Pistol) configuration. Basically, the slide is cut to accept most of the common micro red dots on the market today. Our test model came with the HEX Wasp micro installed, but it is not included with the gun from the factory (Springfield will likely, we guess, make that an option for future Hellcat Pro rollouts). What’s particularly welcome about the HEX Wasp is that it has such a shallow base that the open sights remain visible and functional. In other words, you can have an open sight backup without having to install a set of tall aftermarket sights for red dot clearance. 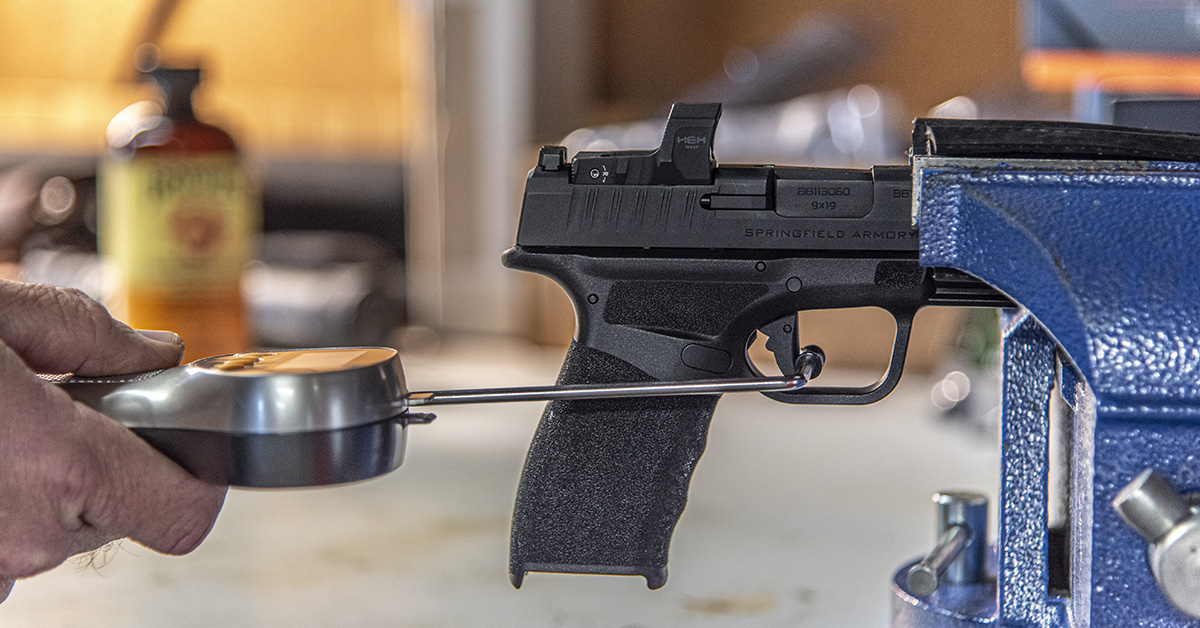 While I give the Hellcat Pro high marks across the board thus far, we hit a minor speed bump when attention turns to the trigger. Oh, it works well and is solid, with no discernable slop or wiggle, and the shoe is broad and largely flat for comfortable interface with your finger. The downside is that there is a rather long and not-so-smooth distance between the initial take-up and the break. This is in no way an impediment to good defensive shooting, but it is a less-refined action than we have become accustomed to in several handguns competing within this class. Trigger reset is also a tad longer than we like.

Curious as to the trigger pull weight, I clamped the gun in the bench vice and gave ten tugs on the Lyman scale. The Hellcat Pro delivered an averaged pull weight of 4 pounds, 15.5 ounces. A nice figure for a defensive handgun. 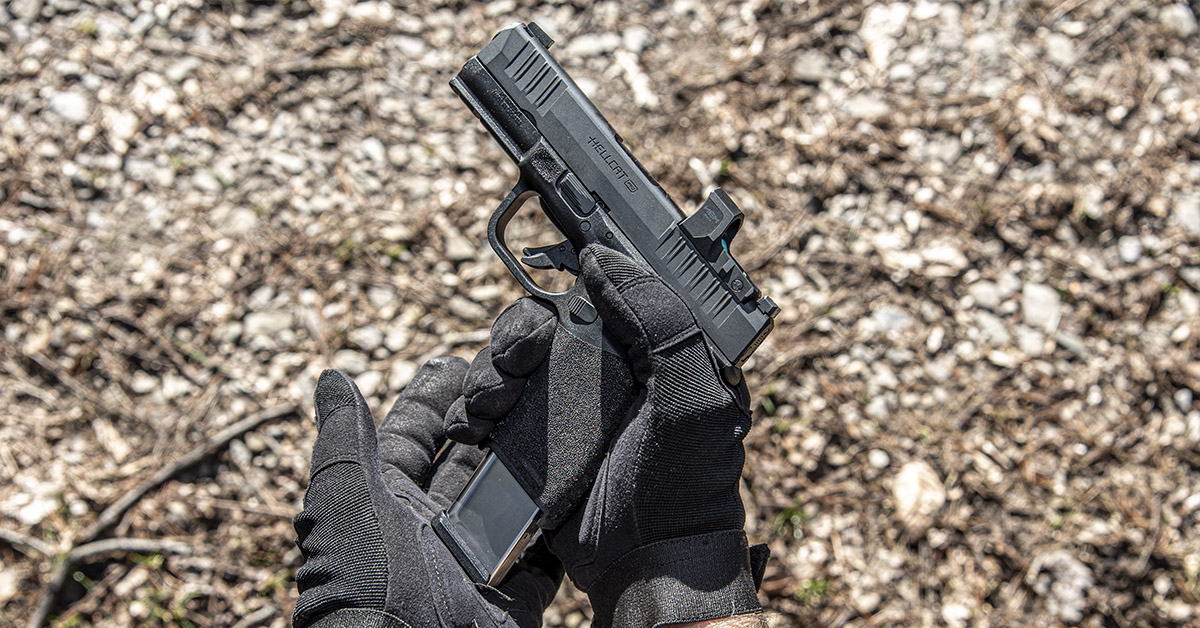 Elsewhere, operational controls can be termed “streamlined.” The slide disassembly lever, slide stop lever, and magazine release button hold tight to the frame while offering enough interface to manipulate without a struggle.

One note…the Hellcat Pro is not offered with a manual safety at launch. Since the Hellcat does have a manual safety option, it’s a reasonable bet that a manual safety Hellcat Pro will be available in the future. For now, the Hellcat Pro safety system comes via the trigger safety, striker pin safety, and a loaded chamber indicator port in the top of the slide. The extractor also protrudes slightly when a round is in the chamber, providing a tactile check for a chambered round. 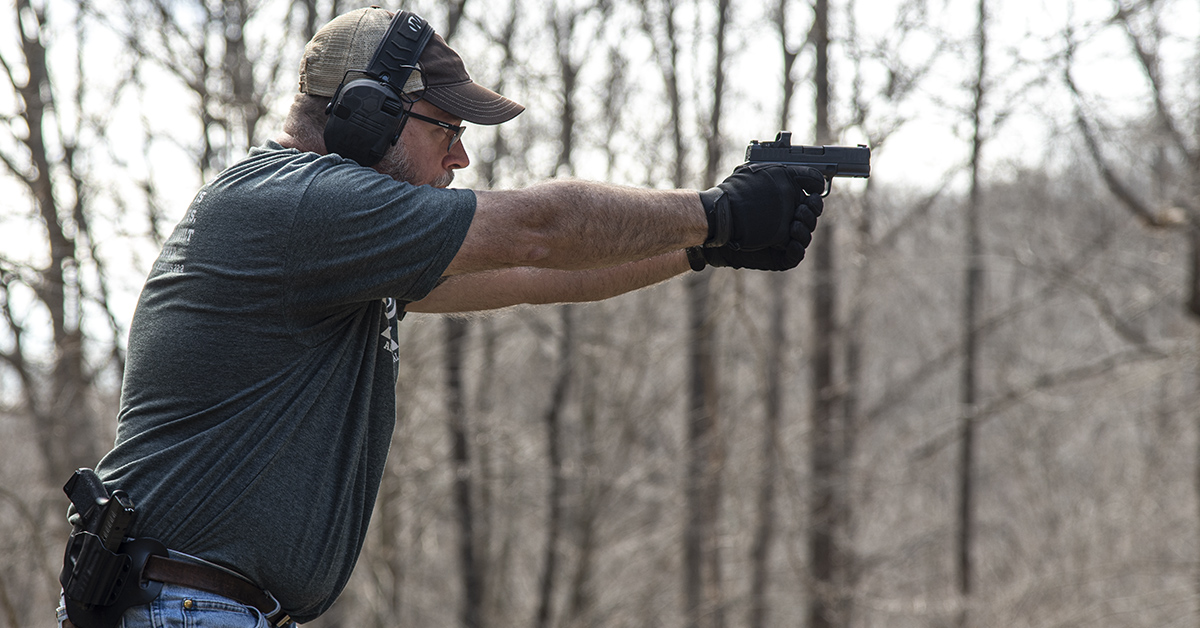 I entered the testing phase expecting the Hellcat Pro to perform no less than par with the Hellcat. It certainly met that standard, and with the larger frame and longer barrel, this compact powerhouse took it a step further. 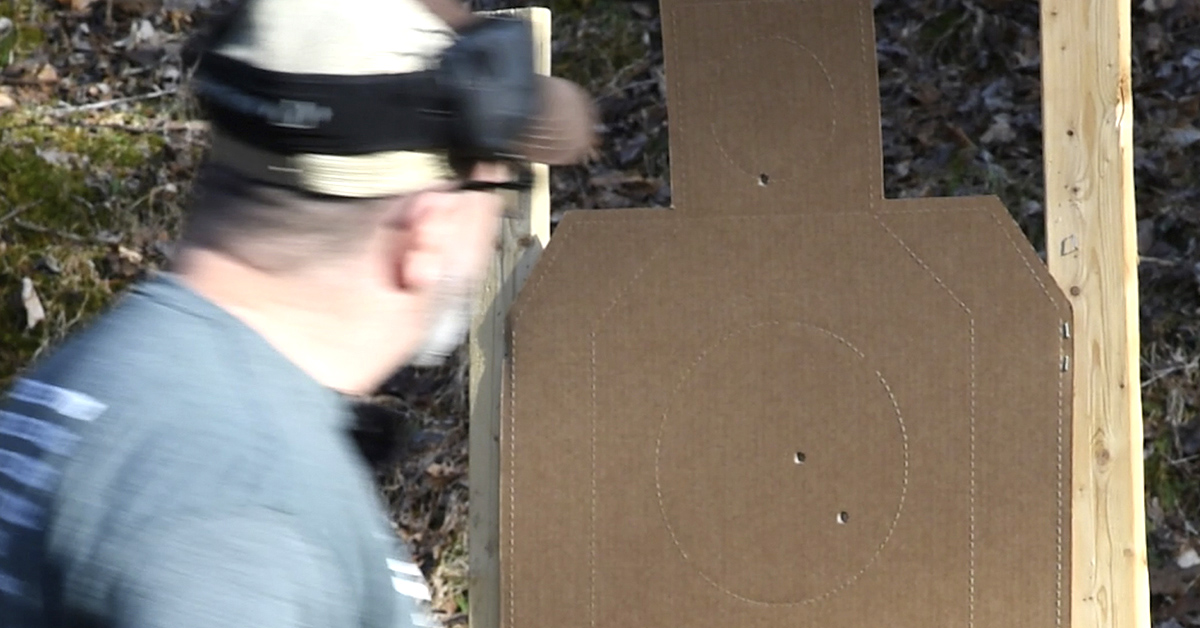 The slightly upsized platform ran well on silhouette drills, with the heavier slide and more expansive grip helping to tamp down recoil and speed up sight picture reacquisition by a wee margin when compared to the smaller Hellcat.

As anticipated, relative accuracy also bumped up a notch. For this test, I tried an extreme spread of ammo — from the insanely light 65-grain poly/copper NovX Engagement Extreme to the Federal Syntech weighing in at a hefty 150 grains. Shooting five-shot groups at 30 feet, the results were as follows: 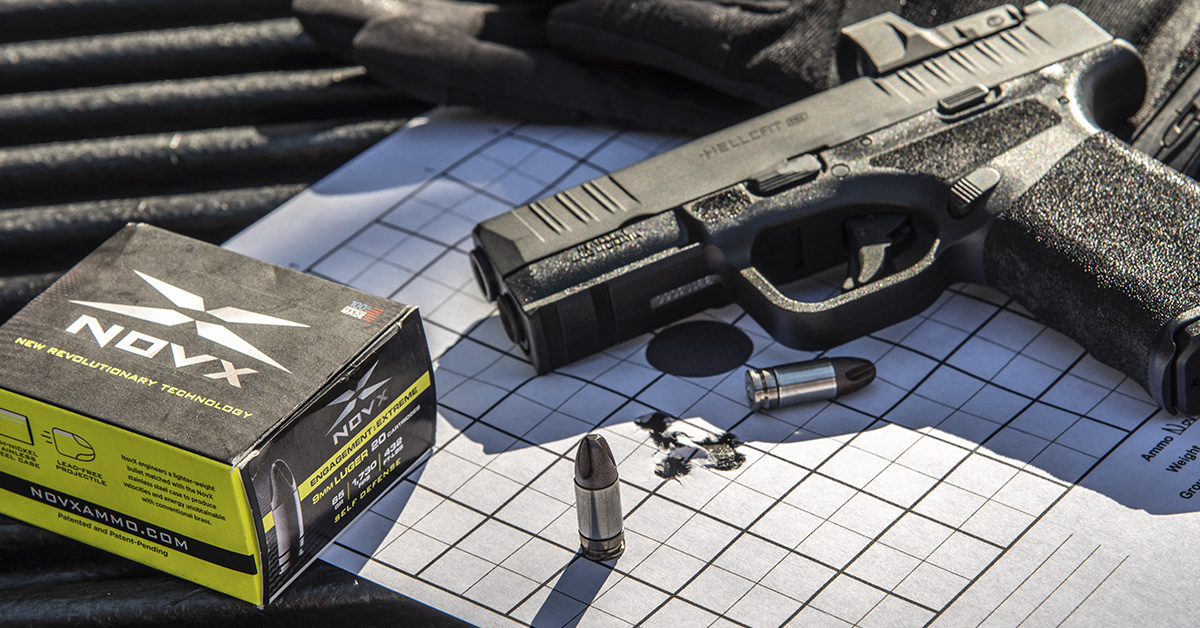 The testing underscored a salient point regarding firearms — one that those who are new to the shooting sports and personal defense should heed: accuracy can vary widely in the ammunition-to-firearm matching game. This is why it is important to diligently test a range of ammunition to find the one(s) your gun likes the best. Here, our Hellcat Pro shot two groups under an inch to one group that was nearly 3.5 inches. That same ammo, shot in different handguns, performed quite differently.

At any rate, this Hellcat Pro really liked the NovX and Fiocchi diet, both of which landed in the sub-inch zone. That’s a testament to consistent loads and solid handgun manufacturing.

In sum, the new compact Springfield Hellcat Pro builds on the strong foundation set by its micro-compact progenitor. With its class-leading 15+1 capacity, light weight, slim profile, and agreeable shooting manners, the Hellcat Pro is going to raise some…dust…on the EDC front this year. 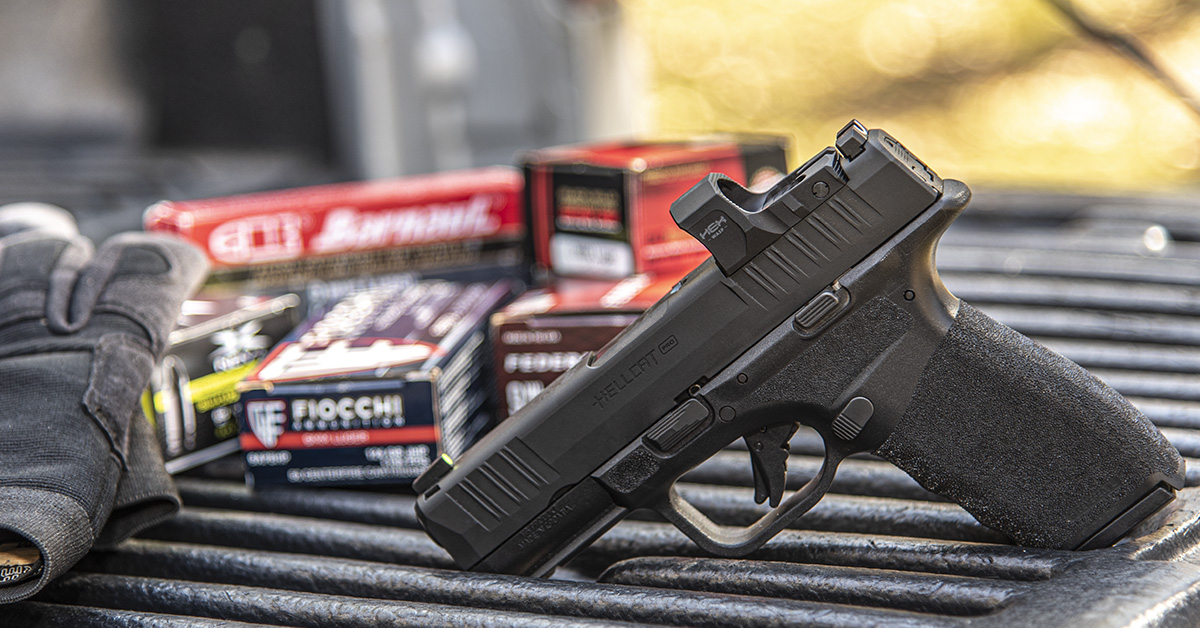 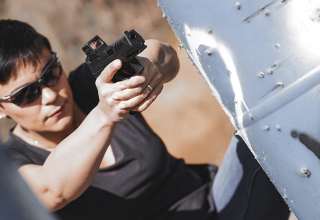