As we pulled the truck to a stop adjacent to the road allowance, we could hear the snow creaking and groaning under the tires. It was so cold that even the snow was complaining. The temperature was a balmy -40°F, and with the wind chill, it felt like -46°F.

The weather was a good reminder of what winter is like in northern Alberta. Being December 21st, it was, in fact, the first day of the winter solstice. Leaving the truck’s comfort, we immediately felt the cold penetrate exposed skin. We hustled to get our snowshoes on and start the mile-long hike down the trail to where we hoped to find elk in an oat field. There had been a large herd of elk feeding in the field for several weeks, and we were banking on locating a couple of cows to fill our late-season tags.

The hunt was the first big game excursion for my wife Stefanie, who was anxious and excited to bring an elk home to fill the freezer. I was there for moral support and to help with field dressing, spotting, and whatever else I could bring to the team of solstice elk hunters.

We were soon geared up and headed down the long road allowance to lead us to the field. Even with snowshoes on, we sank deep into the powdery snow, which was well above our thighs. It would have been impossible to make the march without the snowshoes, and I was tasked with breaking the trail to get us to our destination. It was so cold that I could feel the frost developing on my eyelashes and exposed facial hair. 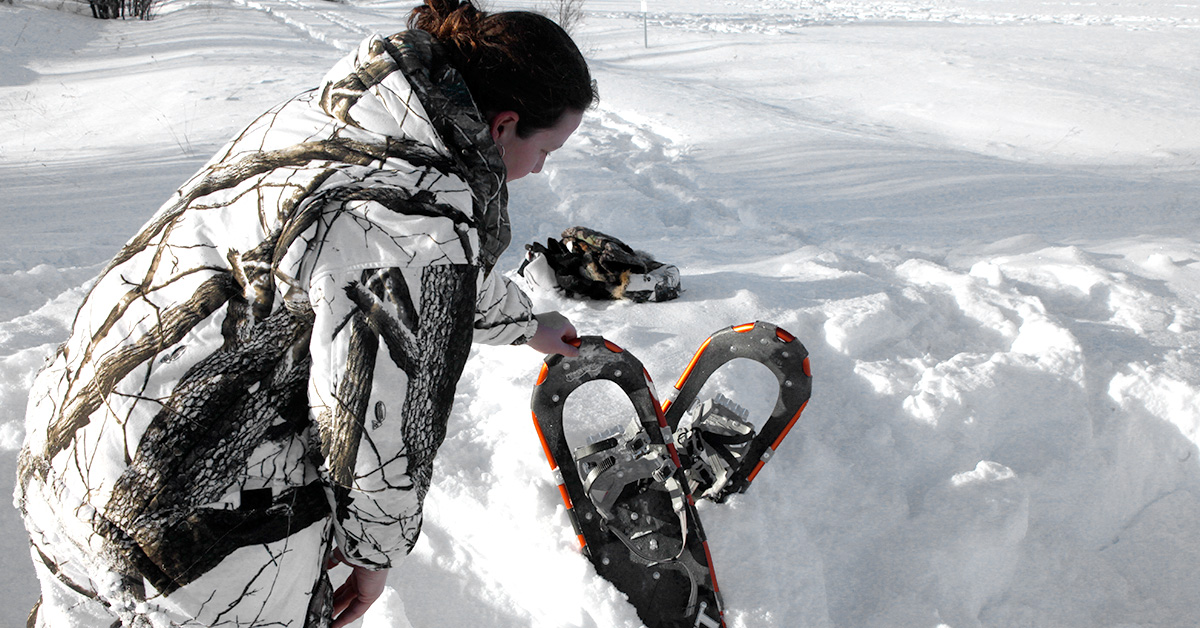 We left the truck shortly after 8 a.m., hoping to get to the field before legal light. It was officially the shortest day of the year with the least amount of daylight hours. Legal light was not until a couple of minutes before 9:00, and even though we had over half an hour to get to the field, it was slow going.

We edged down the trees for a peek into the oat field to see if we could catch any elk lingering for a late breakfast. I used my binoculars to scan through the trees and saw a single cow trotting away from us across the field. The extra crunchy cold snow must have given away our presence, sending the cow in the opposite direction we were hoping she would travel. We headed to a cutline running parallel to the field. With any luck, we would catch some animals still moving within the protection of the forest. We only walked about 100 yards when I spotted something brown off the trees. On closer inspection, I could tell that they were ears. The dark brown coloration made me think mule deer were bedded in the deep snow on the edge of a large patch of alders. After a second look, I could tell the ears belonged to three cow elk resting comfortably between the trees.

Stef and I assessed the situation carefully before taking another step. We decided to circle to stay downwind of the animals and cut through stunted aspens to get closer to the elk. We snuck out onto the overgrown cutline and could see the heads of the elk. I raised my binoculars and ranged the closest animal at 152 yards. They were well within range and Stef’s ability to shoot, so we decided to set up for a shot and carefully aligned ourselves with the elk. I steadied the three legs of my Bog Pod so Stef could rest the rifle. She sat down behind the sticks and tried to make herself comfortable in the deep snow. It did not take long to be ready, and all we needed was for one of the elk to stand up and present itself for a good opportunity. 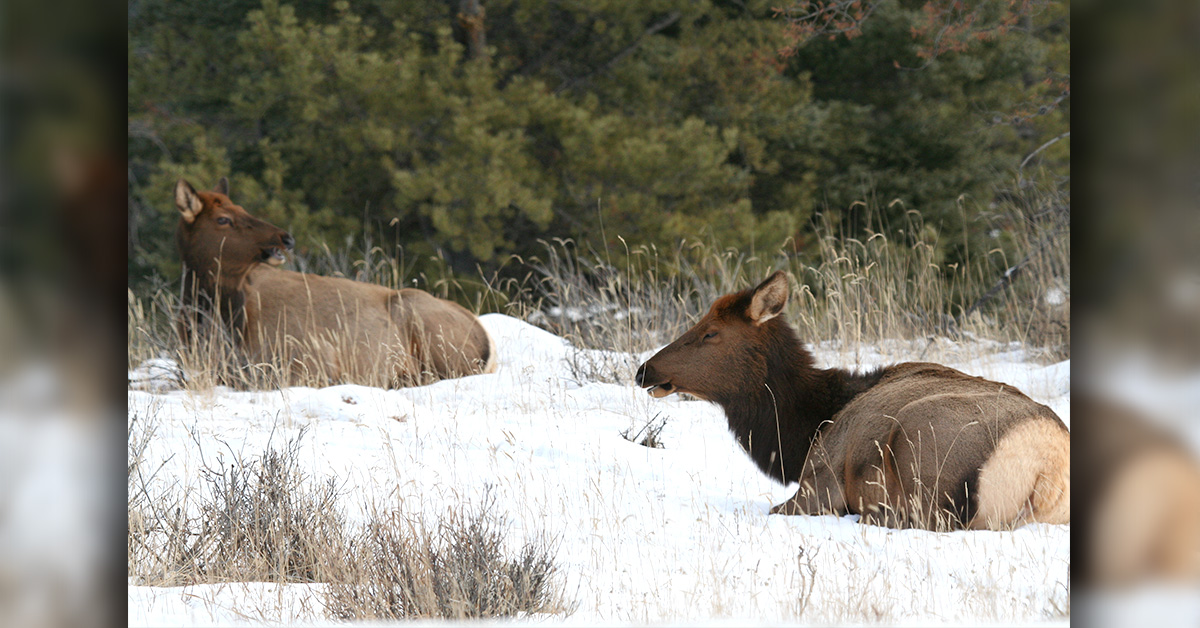 We would wait for an animal to stand. Stef concentrated on the elk and carefully watched down the line through her scope in anticipation of one of them coming to their feet. We didn’t expect it to take long, but as the minutes ticked away the cold started to settle into our clothing. We had been sitting for over an hour, and things looked promising when the middle elk started getting restless, lifting its head, and perking up its ears. It eventually did stand, and Stef shuffled in behind the rifle to get ready. Being calm and patient paid off as the elk finally took a step, providing a clear window of opportunity. Stef slowly tightened up on the trigger, only to hear a slight ‘click.’

The firing pin in the rifle was frozen and not sliding with enough force to strike the primer on the cartridge. Stef handed me the rifle, and I removed the cartridge from the chamber, worked the bolt, and pulled the trigger six times. The friction was enough to loosen the pin so that it deployed with a distinct ‘clunk.’

Seconds later, Stef was back behind the scope, and at the report of the rifle, the elk dropped its head and jumped into the adjacent trees. The other two stood looking around, trying to figure out what was going on. I told Stef to sit tight and watch, as we did not want to spook any of the animals. To our surprise, 60 elk walked across the line, providing an incredible view of the big herd. 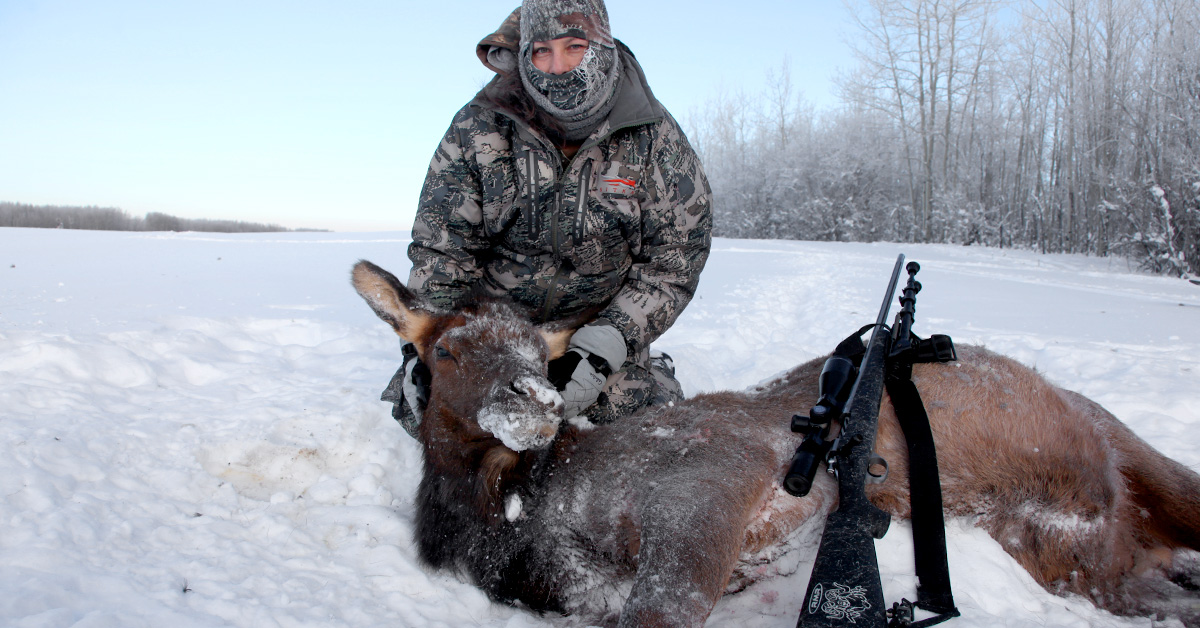 As I neared the spot where the elk had been standing, I could see brown fur through the trees in the deep snow, and I turned around and raised my thumb, indicating success. I waited for Stef to catch up with me before we approached. It was an exhilarating and emotional moment for my first-time elk hunter. She had successfully taken an animal on her very first trip and made a perfect shot.

After the frozen firing pin experience, I set out to ensure the problem would never happen again. With outside temperatures dropping close to -50°F, testing different lubricants and products on guns was underway.

A semi-automatic rimfire and shotgun, and one bolt-action rifle, were stripped clean. Different products were applied on each gun then placed outside in the bitter cold for six hours. Testing was easy—the gun either functioned or it did not. It was a big test for extreme cold, and one product worked in all the firearms, allowing them to shoot and cycle on the first trigger pull. 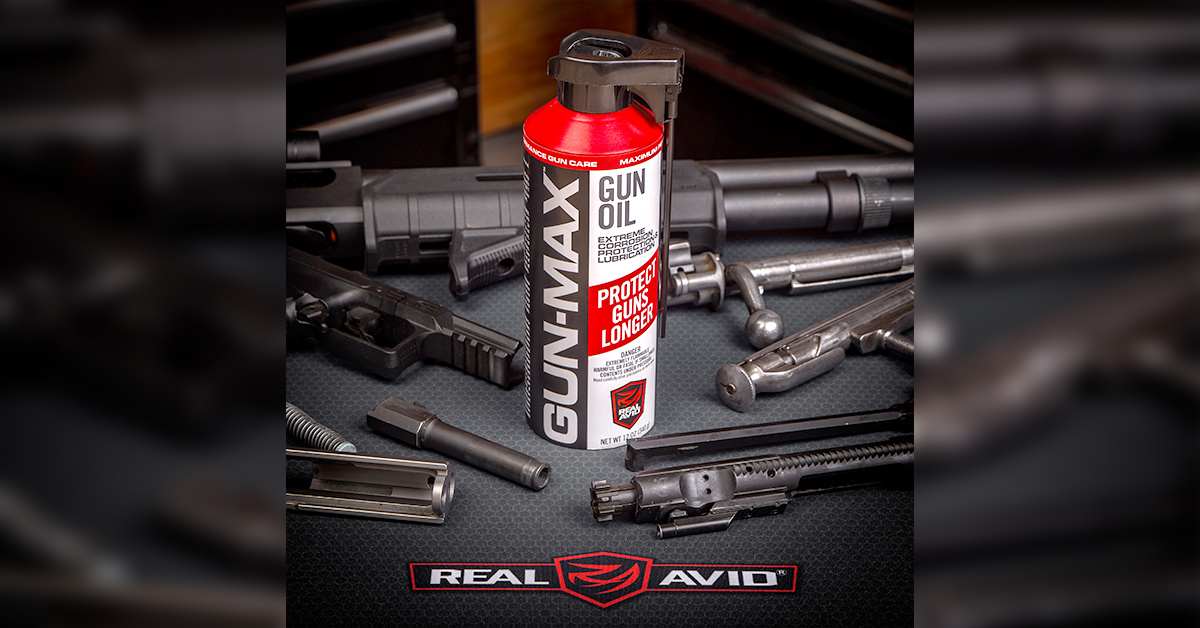 Real Avid makes Gun-Max Gun Oil, an advanced gun-metal grade formula for protecting, lubricating, and cleaning modern guns. I have tried many products that claim to work in the extreme cold and did not think a solution was feasible.

I was pleasantly surprised by the product that allowed all test guns to fire and function properly. The Gun-Max Gun Oil has inhibitors that displace moisture for extended corrosion protection. The oil also contains anti-friction additives that bond to metal surfaces for longer-lasting lubrication of moving metal parts. The bottom line is that the product works in extreme cold.

Stef drew another cow elk tag the following year, and we found ourselves facing -40°F once again. There were no delays when we found the elk, and a nice cow was harvested with a single, well-placed shot. 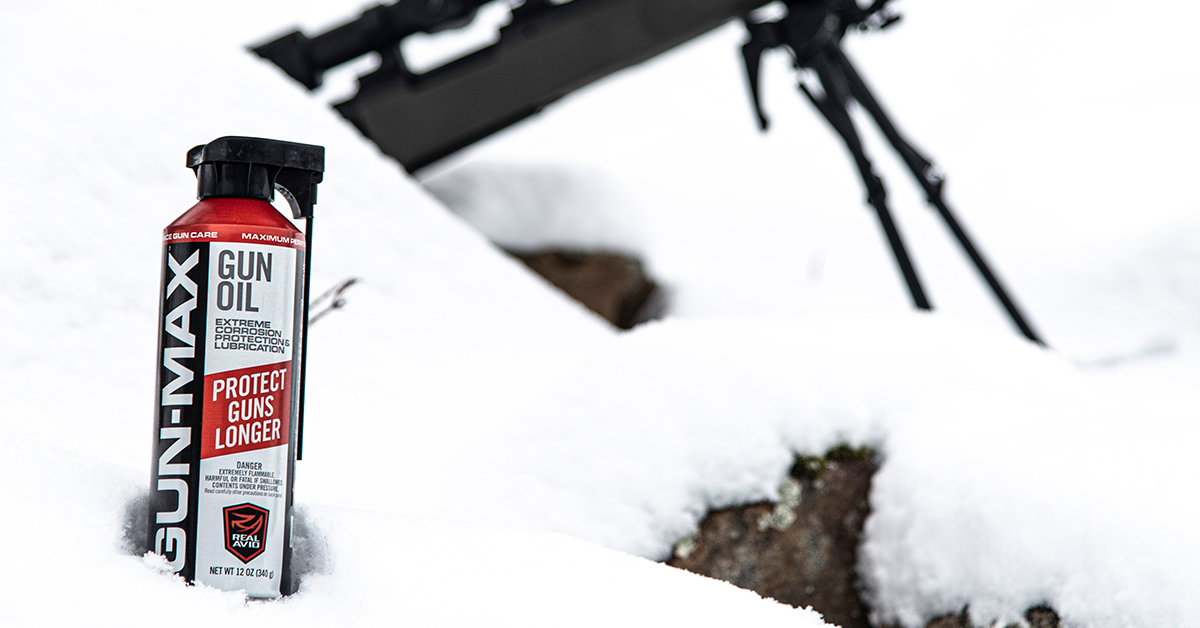 Real Avid has a wide array of firearm cleaning kits, specializing in shotguns, rifles, handguns, and AR15s. Check out the options and the Gun-Max Gun oil at realavid.com.

Stripping Down the Gunk

Rifles can fail in extremely cold conditions. A misfire can usually be blamed on a slow firing pin, delayed by freezing oil or grease in working parts. The primer is often indented, but the force of the firing pin hitting it is not enough to ignite the propellant.

Preparing rifles for the cold, especially a new rifle shipped with grease or oil in the barrel and action, is easy. Remove the bolt from the gun and hold it over a pail to contain debris. Take an aerosol can of brake cleaning fluid, denatured alcohol, or Real Avid’s new Foul-Out Gunk Blaster and drench the bolt until it is dripping into the pail. Turn the bolt to ensure the cleaning fluid gets into all moving portions of the bolt. Wait a few seconds, then repeat the cleaning. The cleaner will cut and remove grease, oil, and dirt build-up, and dries extremely fast without residue.

After the cleaner strips off the oil, grease, or lubricants to bare metal, use Gun-Max Gun Oil to lubricate and prevent rust. The high-tech oil provides excellent protection during storage, especially in areas with high humidity.

How to Discover Gold During an Ammo Shortage!

Bare ammo shelves have you frustrated? The solution may be closer than you think. by Brad …