Is a 28-gauge the right choice for your 2022-2023 waterfowl pursuits? Is it a gauge you should even consider? Will it kill effectively with modern-day shotshell loads? Let’s find out.

I honed my hunting teeth chasing honkers in cut grain fields and mallards along drainage ditches near my home. Waterfowling is in my blood, and each October, when Mother Nature breathes out of the North, my heart starts to beat faster with anticipation.

My first waterfowl wrecker was a 3-inch chambered 12-gauge, and I was lucky enough to get to sling lead at ducks and geese for a year. I was young, but I remember shooting 2 3/4-inch Federal Premium #6 High Brass shotshells for mallards and gadwall. For geese, the length and payload changed a bit — 3-inch Federal Premium Lead #2s. This load was devastating on lesser Canada geese and the Giant subspecies.

Then, things changed. Lead was outlawed, and waterfowl hunters switched to steel shot. Ouch! Less is being kind when referring to early steel loads as effective waterfowl killers. I remember that most hulls rattled, and the steel pellets inside were not shaped well. Not only did these loads seem to cripple and not kill, but they patterned like crap.

Enter the old school mentality of bigger is better. The second we could, my waterfowling crew sold our 3-inch shotshell shooters and purchased longer-barreled 12-gauge makes that would cycle 3 1/2-inch shotshells. We wanted to increase the payload and figured bigger would be better.

In addition to swapping 12-gauge models that could handle 3 1/2-inch shotshells — some guys even bought 10 gauges — we upped our shot sizes by two and three. Let me explain. If we shot geese with lead #2s, we jumped to BB, BBB, and T shot for geese.

It worked, to a degree. Steel loads were still sub-par, and while the increased payload and size of steel pellets helped, there was no comparison to lead. 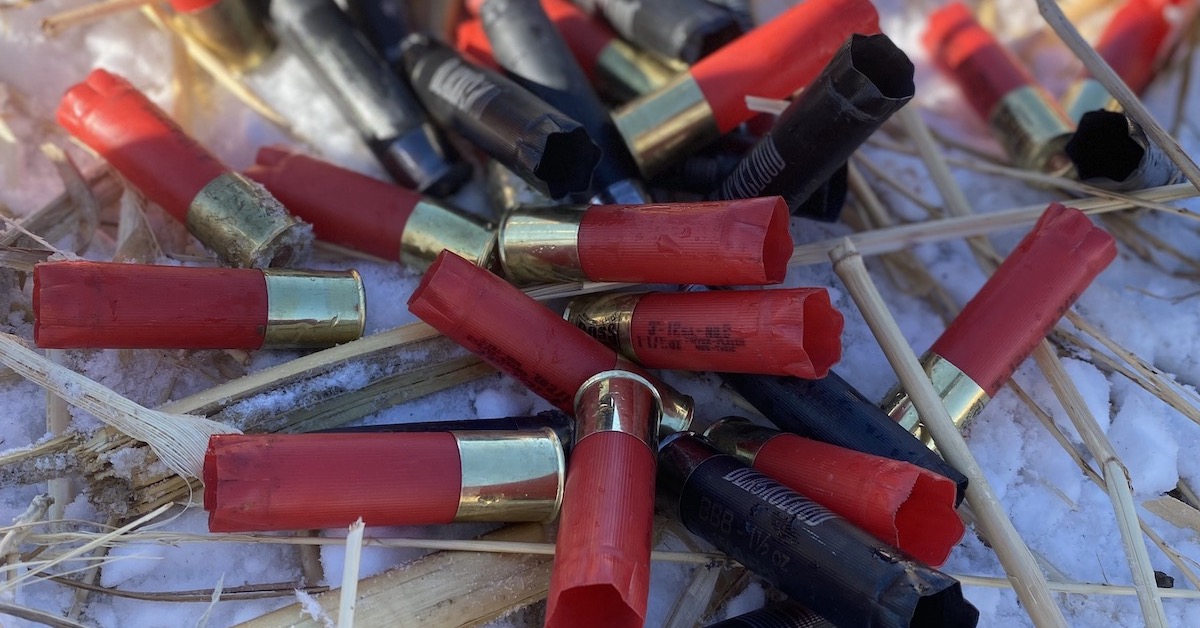 I was the first convert, likely because I’m the youngest member of my old school goose crew. I researched and invested in some of the first 3-inch (not 3-1/2 inch) bismuth shotshells produced. Wow! Back to the good old days. Early bismuth loads were pricy, but I discovered I could drop back down to lead shot sizes due to the density and uniformity of the bismuth and crumble ducks and geese. I shot fewer shells and killed more birds.

Today, there are some remarkable steel shotshell makes on the market. My favorites include Hevi-Shot’s HEVI-METAL, Federal’s Black Cloud, Winchester’s Blind Side, and Apex’s S3. Then, there are hybrid loads — shotshells that contain a mixture of steel and another metal like bismuth or tungsten — winner, winner, waterfowl dinner. Not only are these loads potent, but they pattern remarkably well and allow the waterfowler to drop down in shot size and, in many cases, shotshell length. The top of the heap is straight bismuth and TSS (Tungsten Super Shot) loads. Amazing! Many of these shotshell creations, like those from BOSS, Apex, Federal, Browning, and others, contain a metal (bismuth or TSS) that is much denser than lead, and I promise, these shotshells will remind you of the good old days.

I consider myself an open book and a deep thinker. I like to try new things, and for 2022, I will be slinging steel, hybrid, bismuth, and tungsten loads at ducks and geese using Benelli’s SBE 3 28-Gauge.

That’s a direct quote from one of my closest waterfowl friends when I told him the news; however, I sat down with Benelli’s director of management George Thompson and asked him some questions about the new Super Black Eagle 3 28-gauge.

Question: Is it true the 28-gauge will kill ducks and geese as efficiently as a 12-gauge shotgun?

Answer: This is false. The killing efficiency between the 12-gauge and 28-gauge are not comparable. There are several variables here, but the payload would dictate that 12-gauge kills birds better. The 28 is not meant to replace the 12; it’s meant as a complementary gun for waterfowlers. In the right situation, the 28-gauge is highly effective. One could argue that a 28-gauge with TSS loads kills similar to a 12-gauge with a light steel load, but that is a ballistics question more so than a product one.

Question: Why should a wing shooter go with a modern-day 28-gauge build over a 16- or 20-gauge shotgun?

Answer: The only clear-cut answer to this question relates to the weight and speed of mount/target acquisition. The 28 is lighter, faster, and will potentially keep you on target better between shots. I’d also say that ammo options for the 16-gauge are relatively small compared to the 28-gauge.

Question: How important is it for the waterfowler to utilize modern-day bismuth and tungsten loads?

Answer: I’d say this is critical. To effectively and ethically use a 28-gauge for waterfowl, hunters should use modern ammo (bismuth/tungsten). I’m not sure anyone is even making 28-gauge steel waterfowl loads.

Question: Explain how the bore diameter of .550 inches paired with the short shot column creates good patterns at short ranges.

Answer: It pains me to say this, but the old myth of a “square load,” meaning the diameter of the bore is equal to or very similar to the height of the shot column, delivers a magic pattern, is not valid. The 28-gauge is not considered a square load; the bore is .550, and the shot column is almost an inch. That said, the 28-gauge does pattern incredibly well. It’s uniform, dense, and has a great length. This gauge is extremely effective on birds and targets alike.

Question: With the proper shot size and shotshell, what is the maximum effective range of the 28-gauge on bigger ducks like mallards and pintail?

Answer: This is a tricky question. It’s as much about the shooter as the gun and ammo. I’ve seen geese drop at 40 yards stone dead, and I’ve also seen ducks fly away at 20 yards; however, I could say the same about a 12- or 20-gauge. I will always suggest that folks pattern their guns with the load they will hunt with and use high-quality modern ammo. One will need to be selective on shots with a 28. This is not a gun for throwing hope at passing birds. If you are on the X and know what your shotgun can do, take the 28.

Question: Do you see the lack of recoil and shot noise as advantages to hunting with this sub-gauge shotgun? If so, please explain.

Answer:  Lack of recoil, absolutely, Yes. This will allow faster and more accurate second and third shots and hopefully get younger folks or smaller statured folks more comfortable in a duck blind. As far as shot noise, I’d suppose it does make some difference, but it’s likely small.

Question: Do you feel shooters can get on target faster and pull more doubles and triples when using a lightweight quick-to-shoulder shotgun like the 28-gauge?

Answer: Absolutely. The gun’s weight and agility will get the gun to your shoulder and on target much faster. The reduced recoil will get your second and third shots on target faster, allowing you to be more accurate.

There you have it. I’m a small-framed shooter who craves close encounters with ducks and geese, and I don’t enjoy pass shooting or taking pot-shots at flaring birds or those not working in on the decoys. For this season, it’s the 28 for me.

A comprehensive field test of Benelli’s SBE 3 28-gauge will follow this article. When the season opens and Mother Nature gets foul, I will let you know my thoughts about this new sub-gauge model.