1911 handguns are among the most popular pistols in America. Unlike SIG, Glock, and HK pistols, these handguns are not well-distributed worldwide. The 1911 is an American institution, and these handguns come in various sizes and weights. Quality, fit, finish, and tolerances hit the mark across the board. You can purchase a bargain-basement foreign-produced handgun that’s not up to snuff or spend a couple of months’ pay on a high-end pistol made by the best American craftsmen.

For most of us, the middle ground is good. Shooters like myself like a high-quality 1911 that is reliable, fast handling, and accurate enough for personal defense. If the bill is less than $1K, all the better so long as performance isn’t compromised.

Springfield recently introduced the Ronin Operator. The Ronin has good sights, a crisp trigger, solid combat sights, and is a quality make. The price is right, and the pistols have earned a good reputation thus far. The Ronin is available in a Commander version, which Colt originated. Today, Commander is a specific term for certain 1911 handguns, much like snub .38 applies to many revolvers. The five-inch Government Model pistol is easily the most manageable of 1911-type firearms. The Commander was shortened by ¾ inch in the slide and features a weight-saving aluminum frame. The Ronin sports a nicely blued steel slide over a stainless frame in the Government Model, while the Commander features an anodized frame. The grips are slimline checkered wood intended for concealed carry. The sights are a wedge-type rear married with a fiber optic front sight.

After unboxing the pistol, I lubricated the long bearing surfaces, barrel hood, and barrel bushing. A secret of 1911 reliability is proper lubrication, quality ammunition, and good magazines. The pistol comes with a single magazine, and I added a good mix of others from Dave Lauck, McCormick, and Wilson Combat for testing purposes.

Ammunition selection wasn’t tricky. I have been trying to keep up with the hoarders and panic buyers. I had a good mix of ammunition on hand. Most of the loads expended were Black Hills Ammunition 200- Grain LSWC. This is an affordable load that exhibits excellent accuracy. Next, I added the Black Hills Ammunition 230-Grain FMJ. These were the primary evaluation loads. I began drawing from a Bullard Leather strong side holster and could get on target and fire quickly at distances of seven and 10 yards. The pistol is fast on target, especially the human-sized targets I was using for this test . The safety of the slide lock is positive in operation and locks in place with a positive indent.

Accuracy is excellent — draw, take the safety off as you line up the target, and press the trigger to the rear. Stay smooth and you’ll hit what you’re aiming at. The grip safety funnels the hand into the grip and releases its hold on the trigger about the halfway mark.

I was surprised at the relatively modest recoil. The pistol’s spring system is designed to limit recoil, and it does just that. Moving to 15 yards, I fired several runs on two and three targets spaced a few feet apart. The pistol performs well and gives up little to the Government Model Ronin in performance. At five pounds pull weight, the trigger action is a bit lighter than the Government Model Ronin Operator. The slimline grips feel good in the hand and offers a solid, comfortable grip. 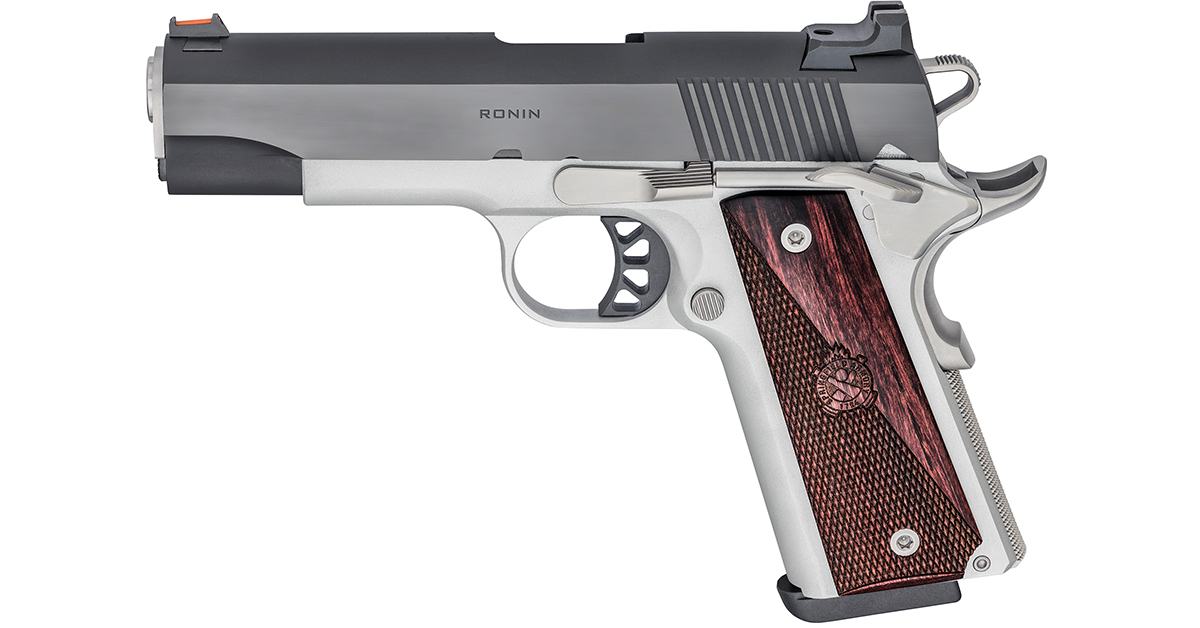 The last portion of the test involved firing the pistol for absolute accuracy from a solid bench rest. While this isn’t a test of a combat handgun, we like to see how the gun performs. The barrel, trigger action, and sights adds up to good, average or excellent performance. In this case, the spectrum of performance was toward the top end. I used two proven loads in testing the pistol at a longer distance of 25 yards. The first was the Hornady 200-Grain XTP. Many experienced shooters find an ideal balance of expansion and penetration for personal defense with this well-balanced load.

I also used a handload with Hornady’s 230-Grain XTP over enough Titegroup powder to hit 810 fps. The results were good. The factory 200-grain XTP load went inside two inches — exceptional performance. The 230-grain handload held to 2.5 inches, which is above average in my experience for a Commander-size pistol.

The Springfield Ronin Operator Commander is a nice-looking rig with a classic two-tone appearance, delivering excellent eye appeal to most shooters. As noted, the performance can’t be faulted, either. The Commander .45 is light enough for constant carry and is among the best choices for concealed carry for those who prefer the .45. Best of all, the pistol is available at a fair price. I carry the pistol in a Bullard Leather Cross Draw, ideal for all-around use, especially when driving. I also use the Bullard Leather belt slide with a sweat guard. This holster rides close to the body and offers excellent utility for concealed carry. I frequently use the Springfield Ronin Commander on the range because it is becoming my favorite carry .45.

A polymer-frame defender that is a cut above by Bob Campbell High-end, premier, deluxe, or…