September 26, 2022
Home Hunting Hunting in the Land of Dragons

I’m following Harold Rondan through the grass in the muggy Florida heat. I am soaked with sweat—just as wet as if I had fallen into the pond off to our right. Some kind of duck I can’t identify waddles out of our way, but I keep focused on the big lizard’s head sticking out of the long weeds next to the pond. He sees us and could bolt for the water any second, and if he does, he is gone. We may not see him again for hours.

“Don’t look at him,” Harold tells me. “Just act like you don’t see him. If we don’t look directly at the iguana, he may allow us to get close enough for a shot.”

I follow my guide’s advice and we get within 25 yards of the big, scaly varmint.

Harold figures this is as close as we dare, and I agree. The iguana has already taken a few steps towards the water. Kicking myself for the tenth time for not bringing a shooting stick, I raise the Gamo air gun and steel myself for the shot. This is a big iguana—what I call a “Golden Dragon” because of the gold hue the large iguanas seem to take on—but the target area is not. A head shot is the only way to anchor the big lizards. Hit anywhere else on the body and they will be in the water in seconds. So, the target area we are talking about is maybe the size of a quarter. I steady the rifle and start the squeeze when the crosshair settles between the eye and ear. A drop of sweat lands on the scope but the air gun bucks and the shot is away. Harold cheers and I see the iguana start the “break dance,” as Harold calls it, when the shot is good. 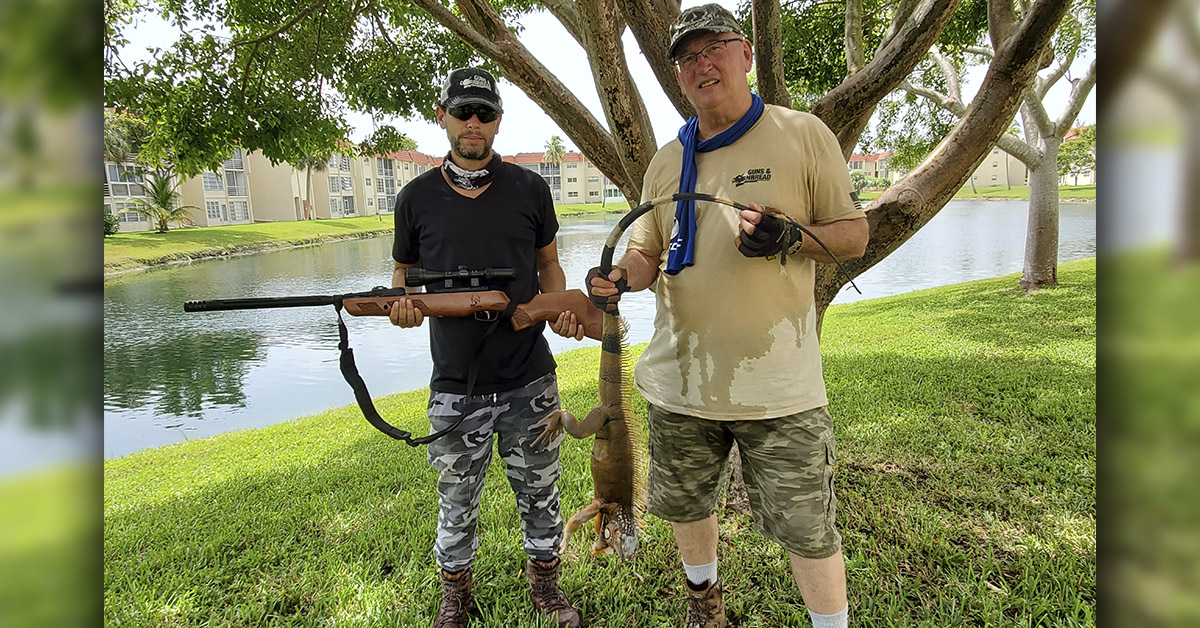 The air rifle company Gamo has initiated this little expedition here in southern Florida and it is centered around invasive species in this area, namely the green iguana.

“Iguanas, Larry? Really? You are going to be hunting iguanas?”

Well, yes, but hear me out.

In case you don’t know, southern Florida has become a breeding ground for invasive species. An invasive species is usually thought to be one that is outside its home range and is usually introduced by humans and almost always causes harm to the environment, economics, and the health of humans. Southern Florida is basically in the tropics and many species can survive here with the warm temperatures. There are miles of water here—canals and lakes—and the invasive species thrive in this environment and use the canals as water highways to travel, especially the fish and reptiles.

Reptiles are really at home here and they live large with all the water and lush vegetation. Two reptiles that have gotten a lot of attention in the past few years are the Burmese python and the green iguana. Both animals have been released into the wild by the pet trade. The iguana has been here for many years, probably since the 1960s. But no one has ever seen them in the numbers they have now. 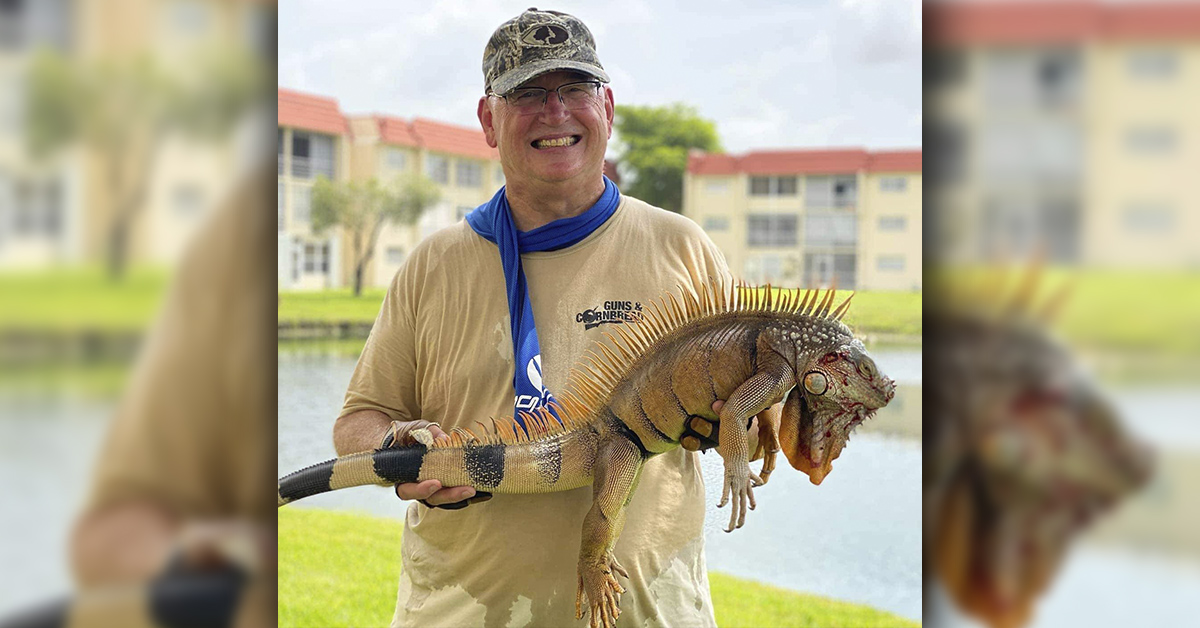 The iguana is extremely destructive and digs massive tunnels in the earth, sometimes 80 feet long. (You do remember where Godzilla came from, right?) This causes much destruction in canal walls and under bridges and buildings. Female iguanas lay large clutches of eggs and they reproduce rapidly. All of this has resulted in a perfect storm for nuisance animal problems. The iguana is a voracious eater, and although they eat mainly vegetation, this will include many vegetables, garden plants, flowers, and ornamentals. Iguanas also eat bird eggs and have become a major predator of different birds here in Florida.

The need for more animal control has spawned several businesses in this area, including one by our friend Harold Rondan, owner of Iguana Lifestyles, a nuisance animal removal company. Harold was furloughed from the hotel hospitality industry in the Covid-19 scramble of 2020. He quickly saw the chance to start a business with all the problems south Florida has with invasive animals, especially the iguana. He now has contracts with several housing and apartment complexes, all of which are desperate to bring down the numbers of the green iguanas that plague their property.

From what I saw of Harold during our time with him, he is busy and hustles all day, going from one call to another. The bulk of his work may be removing iguanas, but he also deals with invasive birds, nuisance raccoons, and several varieties of lizards and snakes, including the eastern diamondback rattlesnake, which he got a call on while we were there (they get big, by the way). 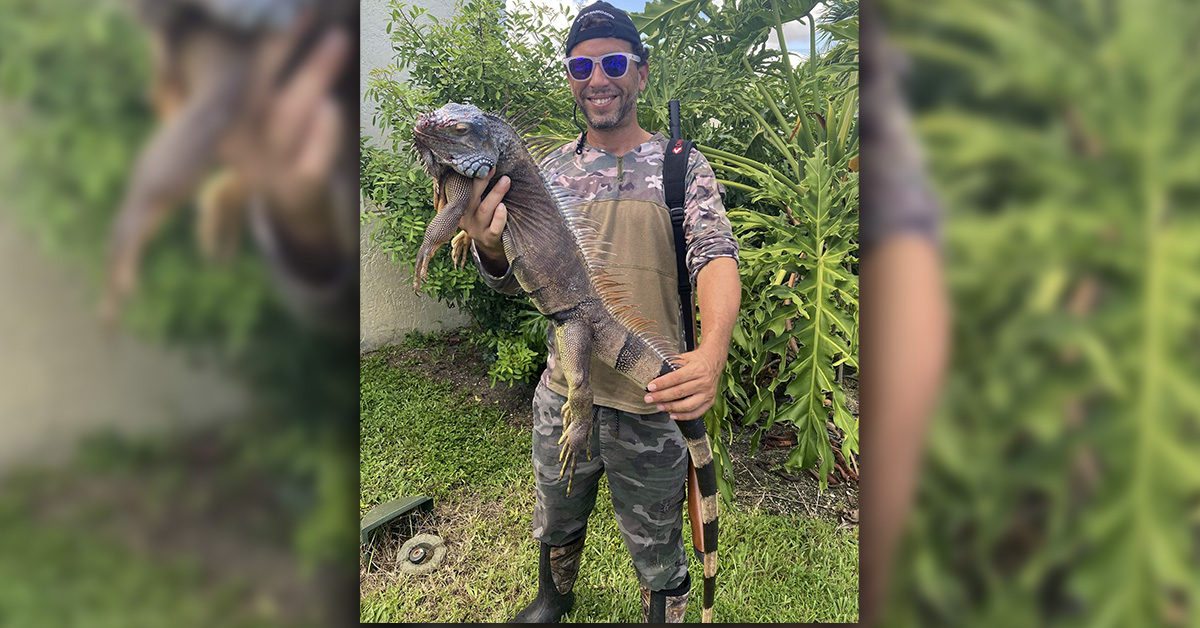 Harold did something else with his company because he is a smart businessman. More people are hearing about the opportunity to hunt iguanas with air guns in this area and Harold added this facet to his business. Acting as your guide, he will take you to where the iguanas are thick, but collecting these scaly varmints is not always easy. The iguanas are wary, believe it or not, and you may not get closer than 25 yards or so. These lizards are extremely tough and your only target that will put him “lights out” is that quarter-sized spot on the side of his head. The shooting can be very tricky. 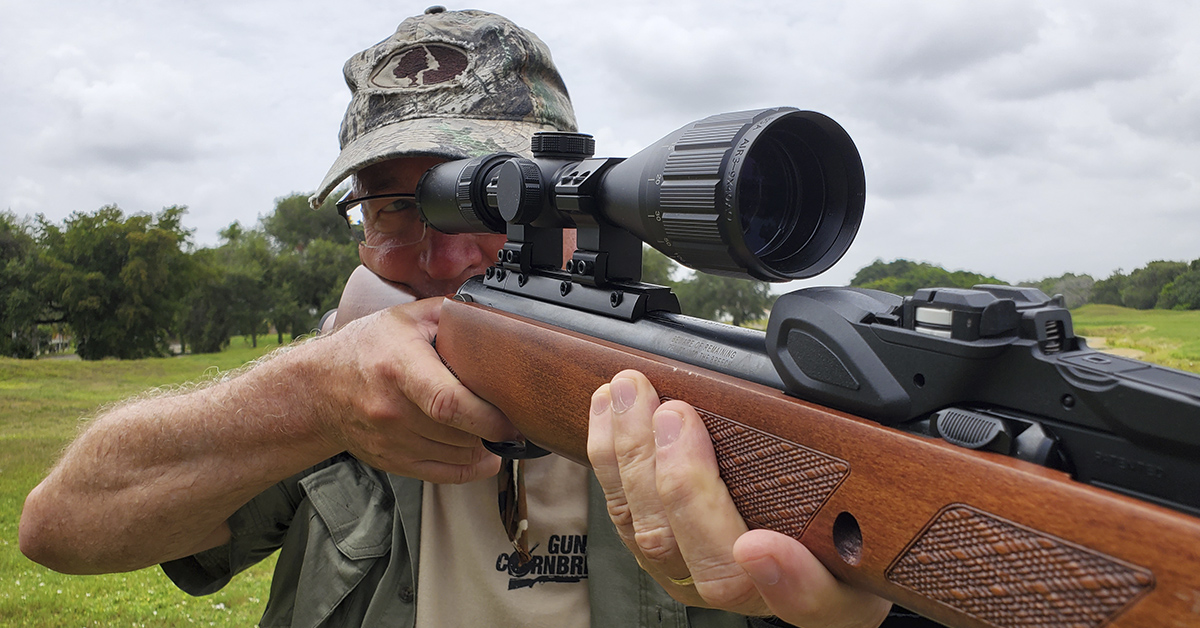 We hit the muggy climes to test the Gamo air guns and see how they stacked up against the iguana hordes, and no one is disappointed. These are .22 caliber pellet rifles—the Gamo Swarm Magnum G2 (2nd generation) and the Bone Collector 10X G2. The Swarm Bone Collector 10X G2 was designed in collaboration with Michael Waddell and Travis “T-Bone” Turner of the Bone Collector TV series. I have used the Swarm Magnum model quite a bit, including during the annual Squirrel Master Classic that Gamo hosts in Alabama. I knew the gun and figured I would use it on this adventure.

Early the first day, though, during the sight-in period, I was taken by the looks and accuracy of the Bone Collector model and used it the entire trip, sending many iguanas to iguana heaven (or wherever iguanas go).

T-Bone, old buddy, you did good on this rifle.

The bottom line is that most of us will be using these air rifles for small game like rabbits, squirrels, and for the odd garden and barn pests like rats and feral pigeons. What most of us want to know is does this air rifle, which is not a “firearm,” have the power to humanely take these animals? Believe me folks, if these pellet rifles can stack up iguanas as we did in Florida, they will have no trouble with small game. 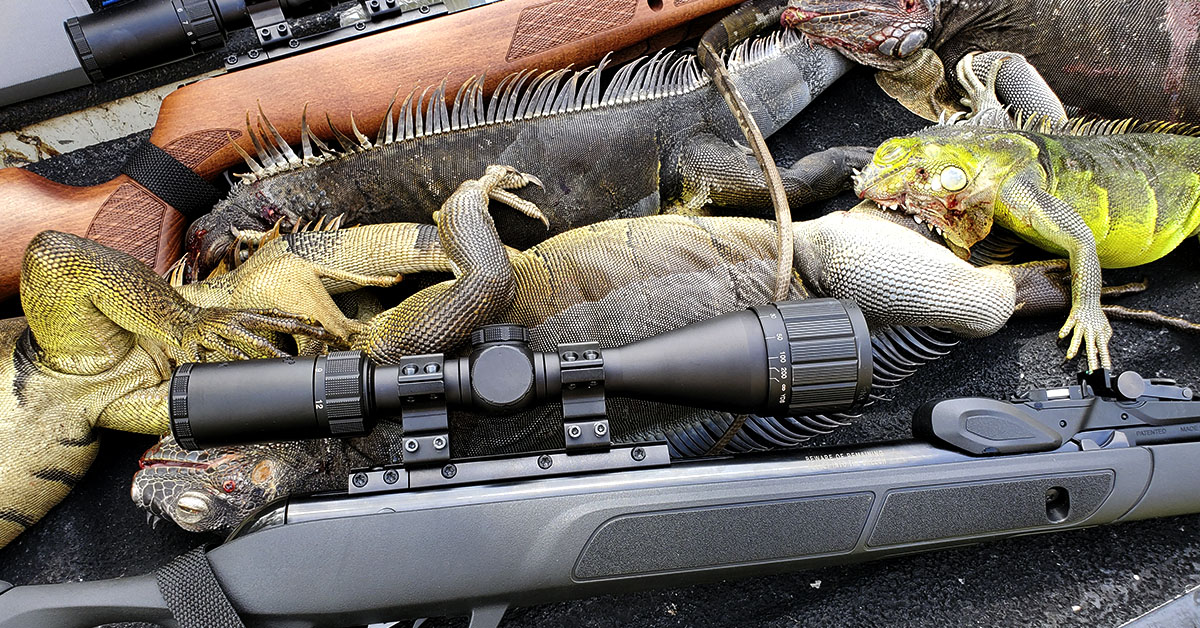 We spent two days in the Florida heat and reduced the iguana population considerably, but in truth, I’m not sure anyone will notice. There are a LOT of iguanas there. If you want to see for yourself, give Harold a call at Iguana Lifestyles.

Gamo has had the Swarm technology out for a few years. It’s a unique loading system that is quite handy, especially for the pellet rifle hunter. By means of a detachable rotary magazine, the shooter loads up to ten pellets and snaps the magazine onto the top of the barrel. The Swarm Magnum G2 requires that you cock the rifle with a break action system each time, but the magazine automatically loads the pellet. For hunting purposes, this is huge. The magazine lies horizontal to the barrel, is low profile, and this allows for the use of open sights, which on this rifle is a fully adjustable rear sight. Both front and rear sights are fiber optic. The rifle also ships with a Gamo 3-9×40 scope and has a two-stage adjustable trigger. It’s adjustable from 3.2 to 2.6 pounds of pressure—heady stuff if you think about it for a pellet rifle that has an MSRP of $269.00.

I am going back to south Florida first chance I get. Harold Rondan has promised me that we will go after the invasive Burmese python (they get about 18 feet long, I think) with the Gamo air guns.

You ready to go? 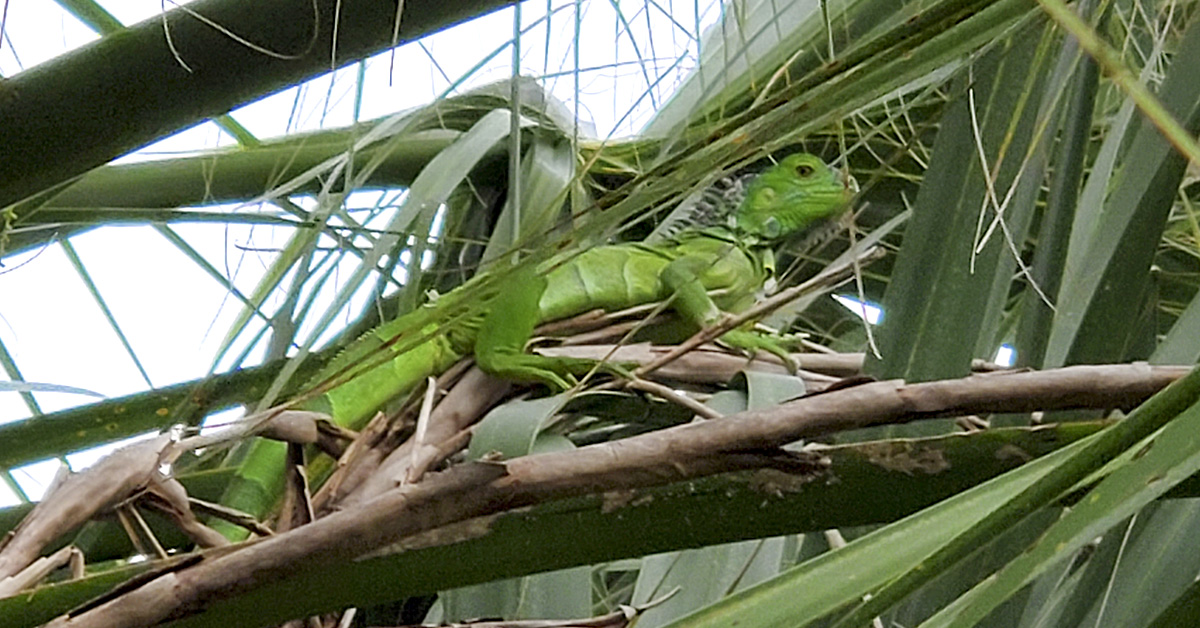