Born for battle, some liken the M4 Tactical semi-auto as the AR’s alter ego

The AR has blossomed over the last couple decades, moving from its bare-bones military roots to a platform that has more variations on the theme and more applications than most of us would ever have imagined. From humble 5.56mm-chambered rifles scarcely removed from their combat-mission predecessor, the AR has morphed into a long-range hero, a big-game and varmint hunting rifle, a pistol, a fast-action competition rifle, and pretty much everything in-between.

All well and good, but through the innumerable metamorphoses, the core of the AR held fast in the minds of most shooters. Strip away the gadgetry and whizmos and you have a defensive platform at heart and the reason for its continued popularity. When personal defense advocates consider a rifle, it is the modern AR that jumps to the front of the discussion almost every time.

The answers stand like signposts along a well-trod path: high magazine capacity for sustained engagement; reliable semi-auto action that keeps mind and body focused on the fight; ergonomic fit and maneuverability in close quarters; and adaptability for needful weapon-mounted accessories.

But as we all know, the AR is not necessarily the first choice of professionals tasked primarily with close-quarter defense encounters, be it on the street or in an enclosed environment. This is especially true when we’re focused on home defense. The 5.56 NATO cartridge’s ballistics may be well-suited for battlefield engagement; however, high-velocity FMJ bullets don’t play well in the home or in suburbia. Overpenetration begs collateral damage.

Then, of course, there is the broad issue of practicality. An experienced shooter, especially one who has successfully trained for close-quarter defense encounters with an AR and has maintained that training level competency, has a distinct and, dare we say, statistically unique capacity for deploying the AR for near-battle. The average Joe or Jane who picked up an AR for home defense in trying times and has yet to commit to formal CQB training with their rifle? Not so much.

AR deployment can be a fumbling experience when you’re jolted out of bed at 2:35 a.m.

As we have often discussed here since the fall of “The Before Times” (you know…pre-pandemic, pre-social unrest, pre-global insanity) and as many experienced defense professionals have advocated over the decades, a defensive shotgun is, without much argument to the contrary, the most feasible long-gun platform for home defense. When fed with the usual flavors of buckshot, buck-and-ball, or even frangible ammo, the shotgun mitigates several of the undesirable issues of the AR we just mentioned, namely, overpenetration of walls, potential for collateral damage, and the challenge of accurately placing projectiles into the target under stressful and difficult conditions. For most folks, it’s a lot easier to align a shotgun barrel and deliver nine #00 pellets to stop an aggressor than to do the same firing 5.56mm bullets one at a time, at night, while stumbling around half awake in your PJs.

And this brings us to an interesting question.

If you are a dedicated AR shooter experienced with the rifle and its advantages, what shotgun platform would best align with the AR in terms not only of function but also of battle-born and bred design and lineage?

While you may be tempted to cite the Remington 870 or the Mossberg 500 pump shotguns, given their long histories in military and LE deployment, the truth is that these firearms represent civilian platforms adapted for professional defense use. There is, however, one shotgun, as with the Eugene Stoner-developed AR, whose genesis arose from a combat focus.

For just north of 20 years now, the Benelli M1014 has served our military, most notably the U.S. Marine Corps, as well as specialized military services across the world. It has seen action in the most austere environments and has racked up an impressive service record. Check out this brief article about a British SAS team whose point member, armed with the Benelli M4 Super 90, “neutralized” five terrorists in seven seconds.

Pretty impressive stuff, and testimony to the effectiveness of a semi-auto shotgun for close-quarter engagements such as you might encounter in a home or a suburban environment.

And just as exciting…Benelli’s civilian variant of this hard-hitting defender, the M4 Tactical, is available for U.S. consumers.

The Benelli M4 Tactical is a 12-gauge semi-auto sporting an 18.5-inch barrel. It is chambered for 2 3/4- and 3-inch shotshells with a 5+1 capacity. There are four models offered: fixed standard or fixed tactical stock (the latter including an integrated pistol grip), either of which can be had with a titanium Cerakote or phosphate finish. Overall length is 40 inches for all models, and each model weighs 7.8 lbs.

When we typically think of defensive shotguns, semi-auto action is not high on the list. One of the reasons semi-autos have never figured prominently for defensive shotgun applications is that some of the lighter loads occasionally employed by military and law enforcement personnel can initiate cycling issues. The M4 Tactical, though, with its ingenious A.R.G.O. system, works well with loads that tend toward the lighter side as well as the heavy stuff.

We recently tested the M4 Tactical, cycling a broad range of defensive loads. These included: 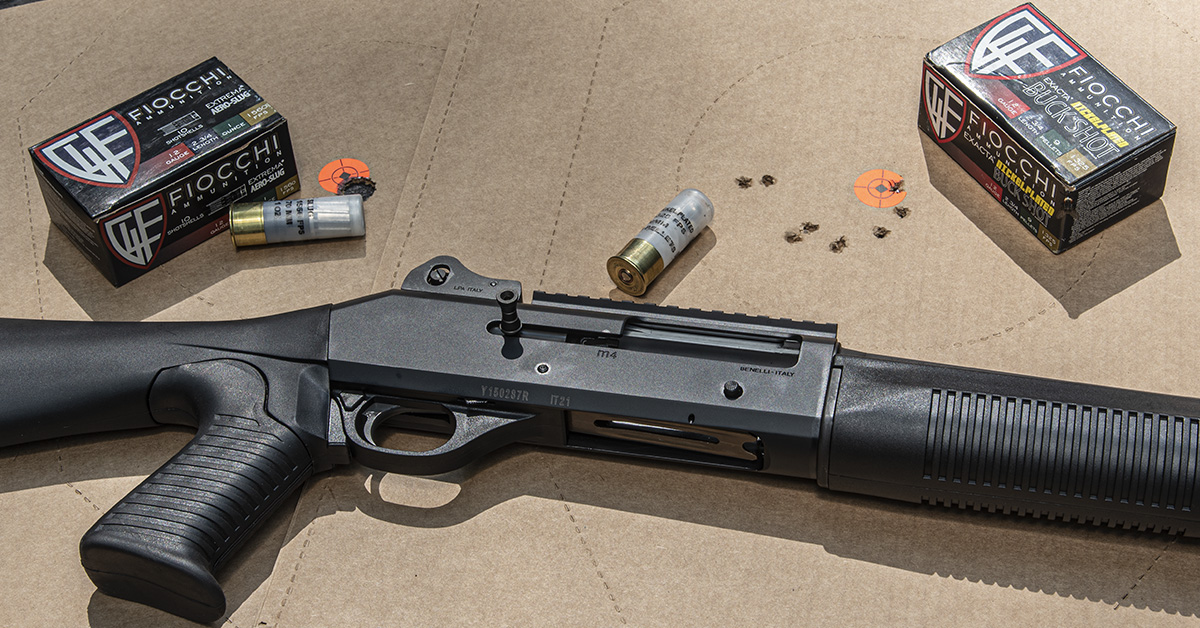 The M4 Tactical spit out all the loads with respectable performance from our 30-foot test line. The factory installed modified choke kept the pellets tight and on target, delivering a whole lot of hurt to our cardboard adversaries.

Out-of-the-box accuracy was as impressive as the M4 Tactical’s smooth-shooting manners as we jumped right into testing without zeroing the sights (the factory settings were spot-on). This was best demonstrated when we sent slugs downrange. The shot placement seen in the above photo (Fiocchi Extrema 1-oz. Aero Slug) was within 2mm of the shot placement using Fiocchi’s Exacta Aero Slug (7/8 oz.) despite the weight and velocity disparities. 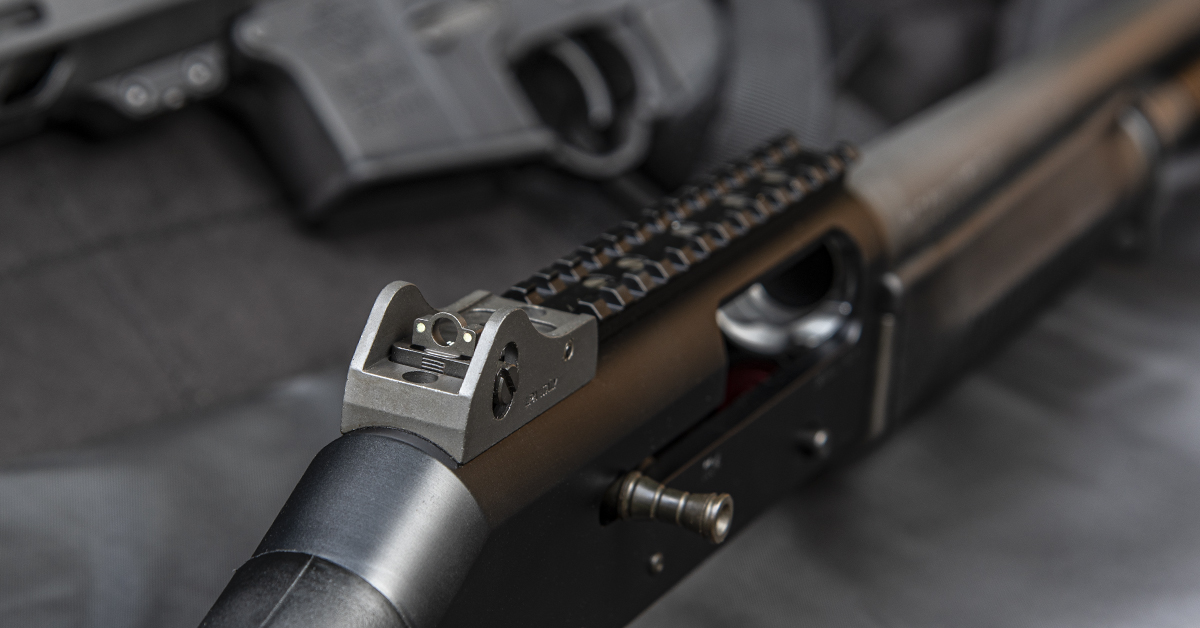 Speaking of sights, the M4 Tactical comes fitted with some serious hardware that isn’t a long toss from the familiar M16A2 sight system. The rear sight is comprised of a bombproof base/housing and a rear peep, or ghost ring, flanked with prominent alignment dots and “wings” to prevent damage from hard impacts. The peep is easily adjusted for both windage and elevation by using a coin or shotshell rim. Windage alignment marks in front of the peep make it easy to keep track of adjustments. 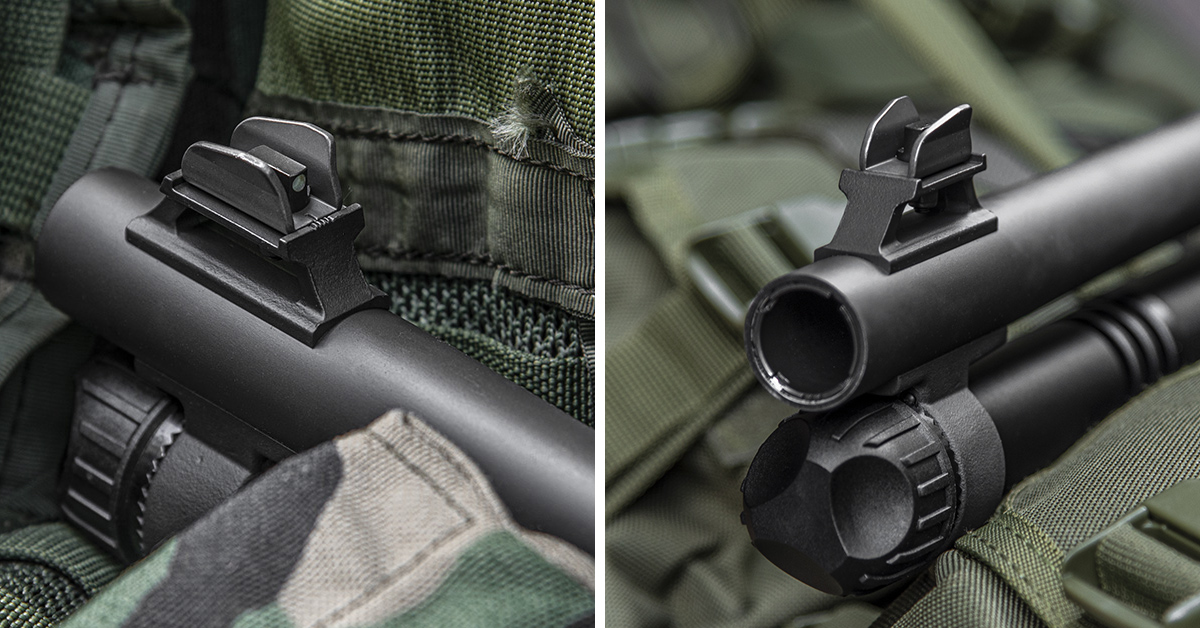 The front sight is made of equally stout stuff. The post sits on a beefy pedestal and, like the rear ghost ring, is protected from impact damage.

Should you wish to upgrade the sight system for low-light/night applications, Benelli sells a tritium insert kit that includes a new ghost ring and post with tritium vials substituting for the standard white paint alignment dots. 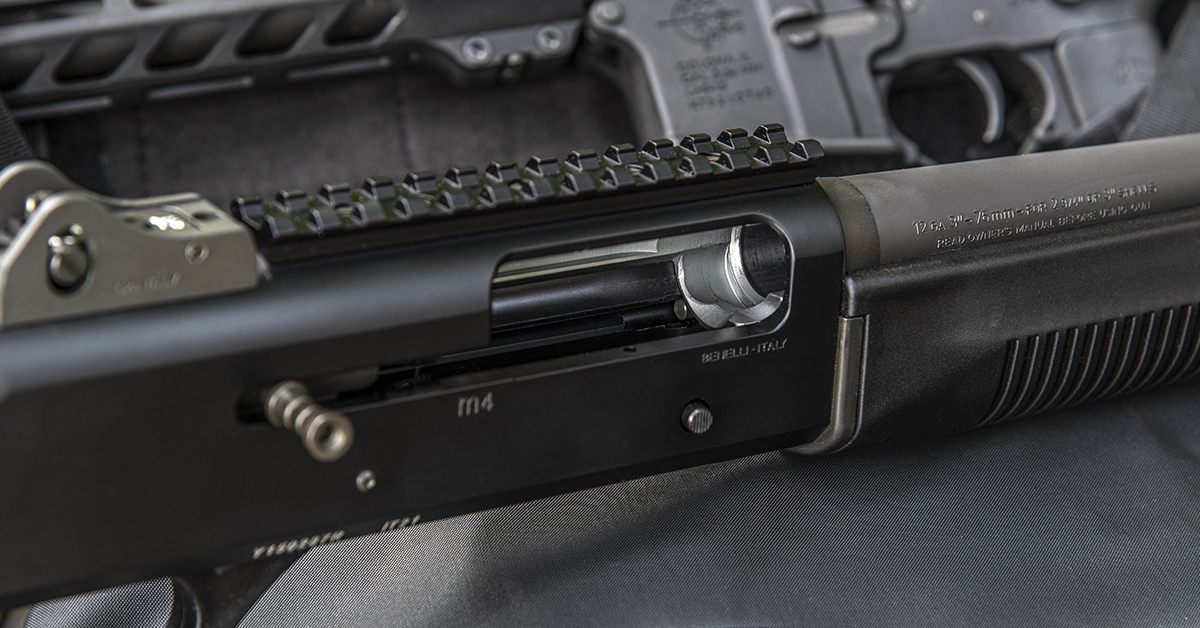 As with the ARs sporting Picatinny top rails, the M4 Tactical has a rail mount across the top of the receiver, suitable for electro-optics, if that’s your thing.

In the above photo, you can see one of the A.R.G.O. pistons at the lower left of the breech and the accompanying rail slot in the receiver. The A.R.G.O. system uses twin gas pistons that take gas from ports located just ahead of the chamber to drive the bolt rearward upon firing. These pistons are self-cleaning, and with the gas being hotter and cleaner this close to the chamber, cycling is more consistent and less fouling transfers into the receiver. 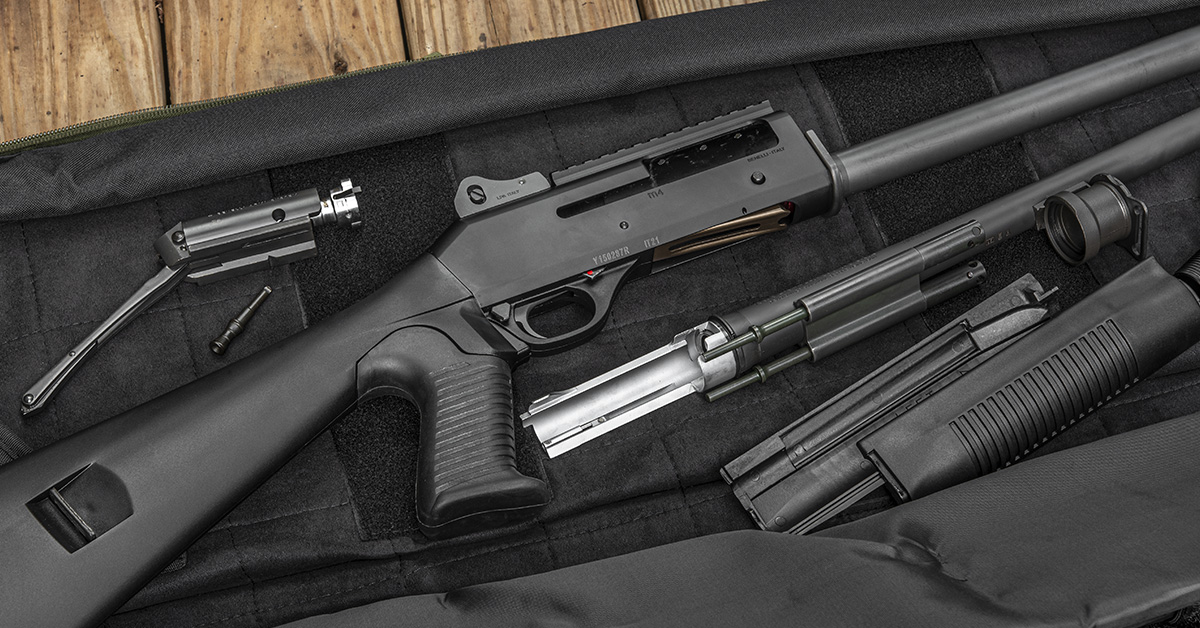 Another aspect of the M4 Tactical’s simplified function is its ability to be easily field stripped should a quick cleaning be required. No tools are needed to disassemble the shotgun as you see here. Further, the firing pin is easily removed from the bolt and the bolt removed from the carrier for a deeper cleaning. You can even remove the trigger guard and assembly from the receiver using only the cocking lever. The cocking lever also allows you to remove the gas pins for a total disassembly. 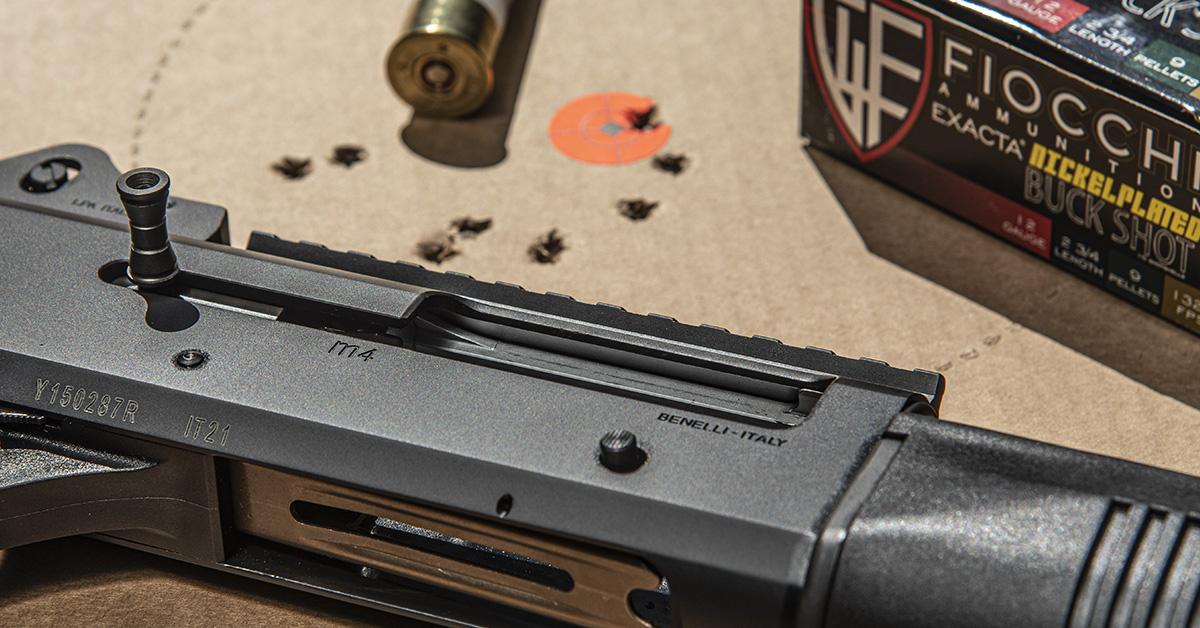 So while the Benelli M4 Tactical may be a platform far removed from America’s favored defensive rifle, it certainly hews to the spirit and, in many ways, the tactical function of the M16 and its myriad descendants in CQB environments.

Is it the AR’s scattershot alter ego? Yeah…we’ll go there.