The choices in AR-15 ammunition are many, but the best all-around option may be to reach for the “white box”

In my personal experience, the AR-15 has generated the most questions concerning what type of ammunition to use. This is understandable because, unlike any other firearm except maybe for .38/.357 revolvers, the AR-15 seems to have a little “confusion” built into it.

There was a time when AR-15s were chambered for one cartridge. Those times are long gone as current AR-platform rifles are chambered for a much larger variety of cartridges. Rather than an increase in the variety of chamberings offered, the confusion seems to mostly center around its root chamberings: 5.56 NATO, .223 Remington, and more recently the .223 Wylde. These chambers will, therefore, hold our attention for this discussion. 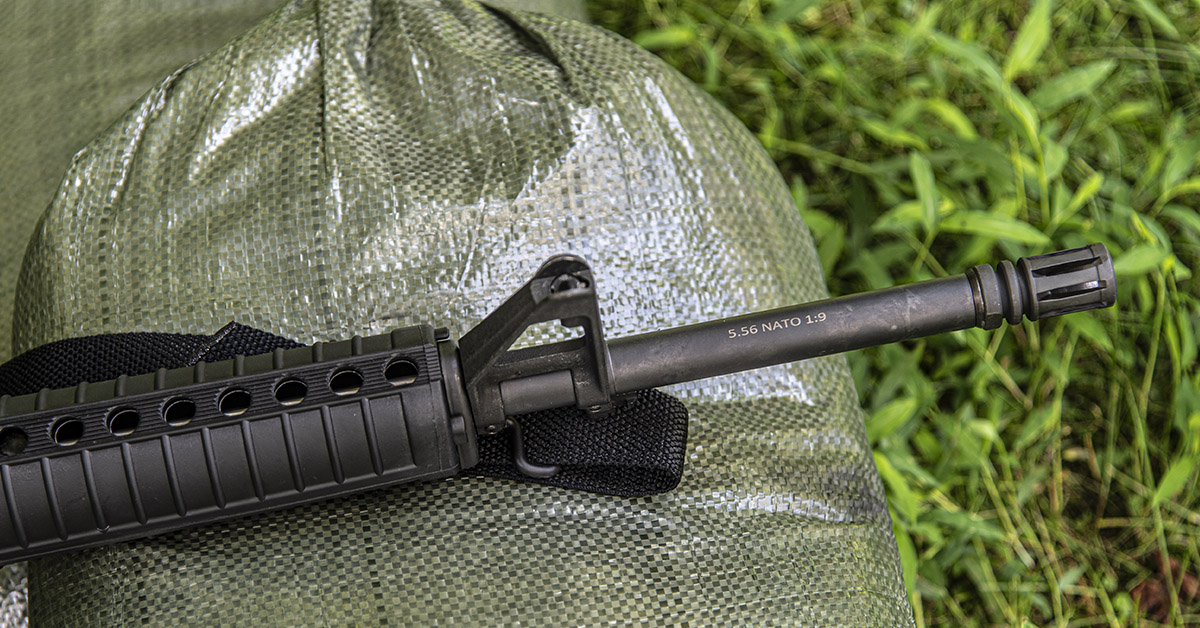 In the past, it was easy enough to advise someone to look to their rifle’s barrel for ammunition guidance, as it would be engraved by the manufacturer as to what ammunition the rifle is chambered for. Simply purchase ammunition of the designated chamber.

This still holds true today, although the AR-15 is somewhat of a different animal. The complete designation of the 5.56 chamber/cartridge is 5.56x45mm NATO, with manufacturers typically abbreviating this to 5.56 NATO when marking their barrels.

This AR-15 barrel seen above is plainly marked as being chambered for the 5.56 NATO cartridge. From a safety and function standpoint, this is the ammunition to use in this rifle and all that I would personally recommend.

You’re going to have a hard time finding .223 Wylde ammo because this is a chamber designation only. The .223 Wylde chamber is somewhat of a departure from historic “norms” within the firearm industry because rifles with this chamber do not fire ammunition possessing the chamber’s designation. Rather, barrels with .223 Wylde chambers fire 5.56×45 NATO and the .223 Remington cartridges. Either of these cartridges can be safely used in rifles possessing a .223 Wylde chamber. Pretty cool, but this, unfortunately, leads to some confusion because some consumers may mistakenly believe that this means 5.56 NATO and .223 Remington cartridges are the same. They are not!

The Sporting Arms and Manufacturers Institute (SAAMI) establishes the national standards concerning firearms and ammunition. These standards are in place to ensure the safe and reliable function of our firearms. SAAMI has published a technical bulletin concerning safe and unsafe firearm chamber and ammunition combinations.

My advice is to match the ammunition to what is engraved on the barrel. When this can’t be accomplished, such as firearms possessing the .223 Wylde chamber, you must first read the factory owner’s manual, which we should all do anyway, and make your ammunition choice accordingly. That takes care of safety and reliable function, but what about performance and, more specifically, accuracy? 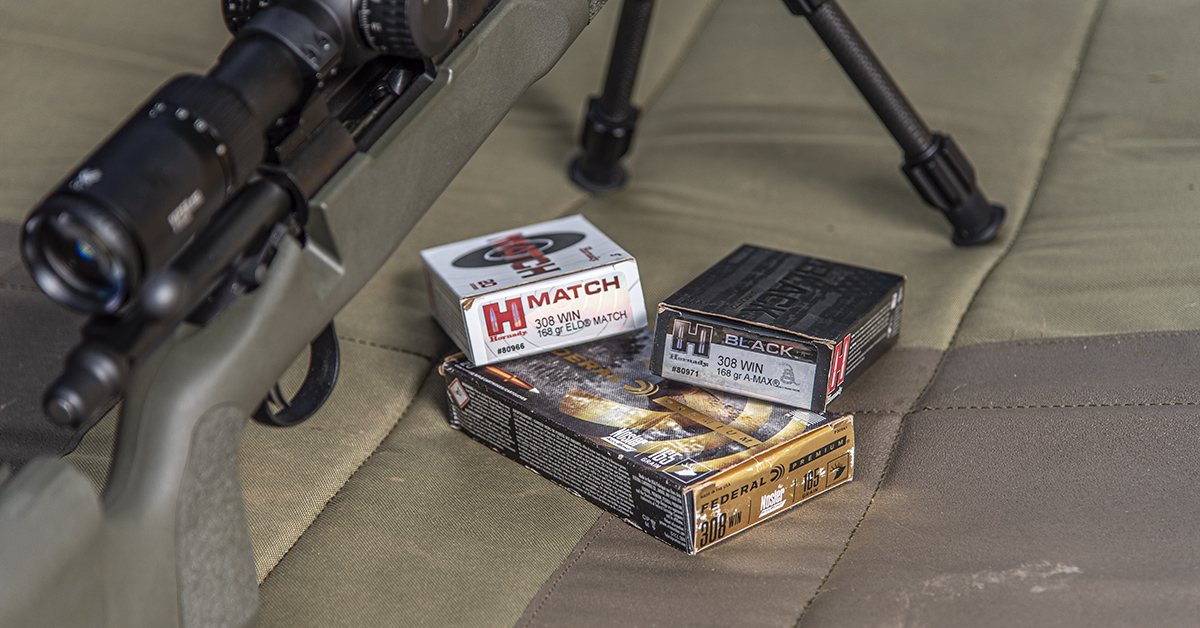 I know, it’s not an AR-15 above, but all rifles share something in common — just because the ammunition is safe to fire in your rifle does not mean that it will be the most accurate. From an accuracy standpoint, ammunition will perform differently from one rifle to another. As handloaders know all too well, finding the most accurate ammunition for a particular rifle will require some experimentation. Here, we selected our ammunition to match what is engraved on the barrel. But how will it perform? 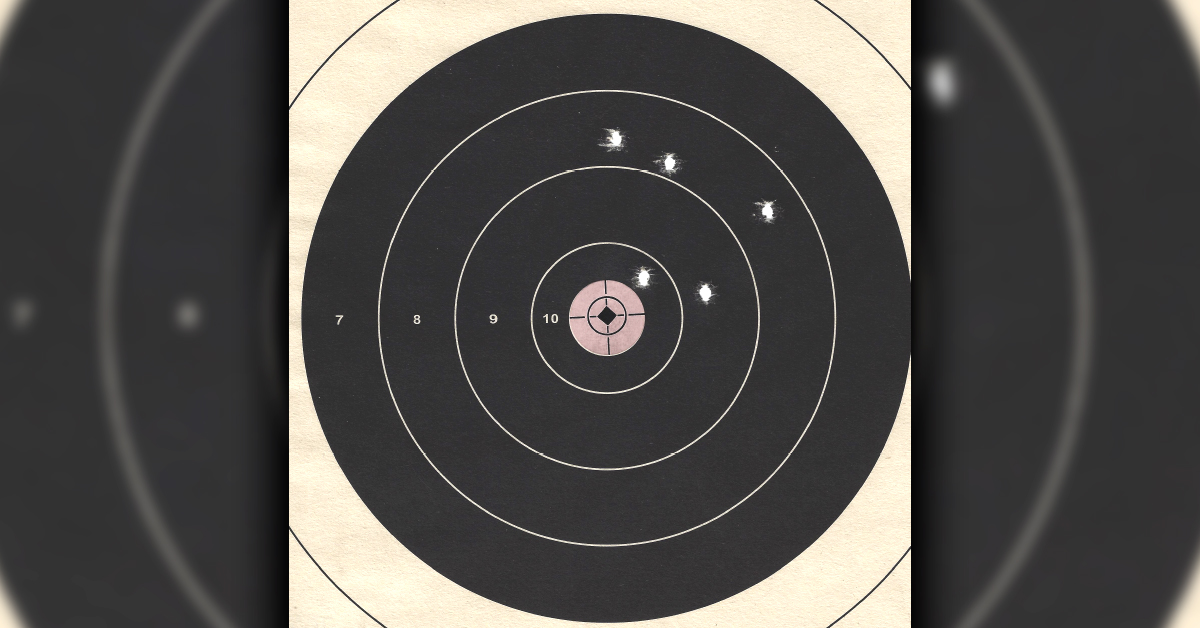 This five-shot group was produced firing Federal Premium Nosler Accubond 165-grain ammunition at 100 yards. Not impressive at all. In fact, it is atrocious. If this was the only ammunition you tested, you would most likely think that something was wrong with your rifle or that you can’t shoot well. Understand, though, that this grouping is not a fault of the ammunition or, necessarily, the rifle. It is simply that this particular load doesn’t work well in this particular rifle. Shoot this same ammo from a different gun and you could just as easily get a half-inch or smaller group size. 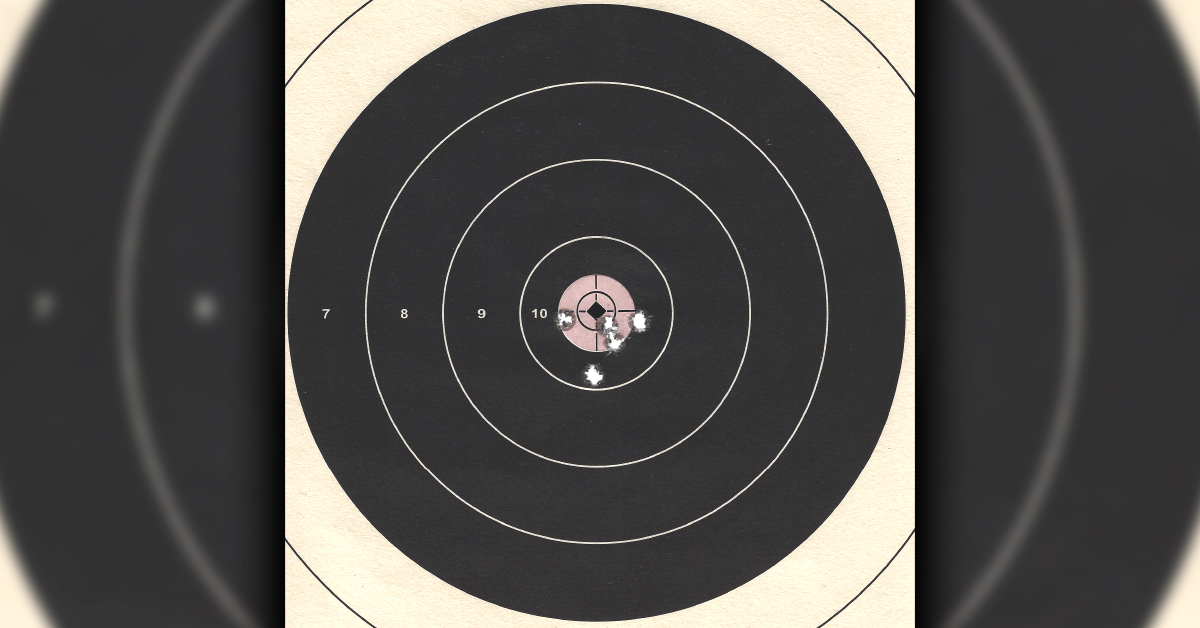 All that was needed was an ammunition change. This five-shot group was fired without any sight adjustments from the same rifle, the same day, using Hornady Match ELD 168-grain ammunition. It delivered a much tighter group with the point of impact shifting towards the target center. Quite an improvement from a simple ammo change. 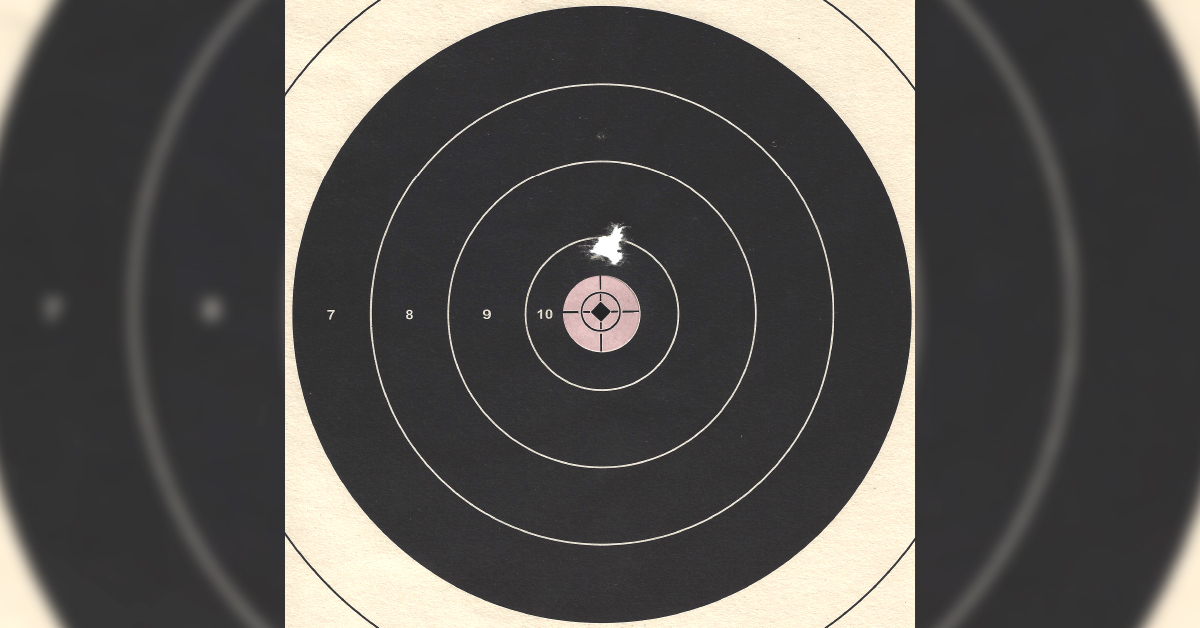 This five-shot group was produced using Hornady Black A-Max 168-grain ammunition. This group was fired on the same day as the others, from the same rifle, and without any sight adjustments. All five shots are now neatly clustered directly above the bullseye.

As you can see, different ammunition can perform quite differently in the same rifle. We truly do not know how a particular rifle and ammunition combination is going to perform until we shoot it. This applies to your AR-15 as well. 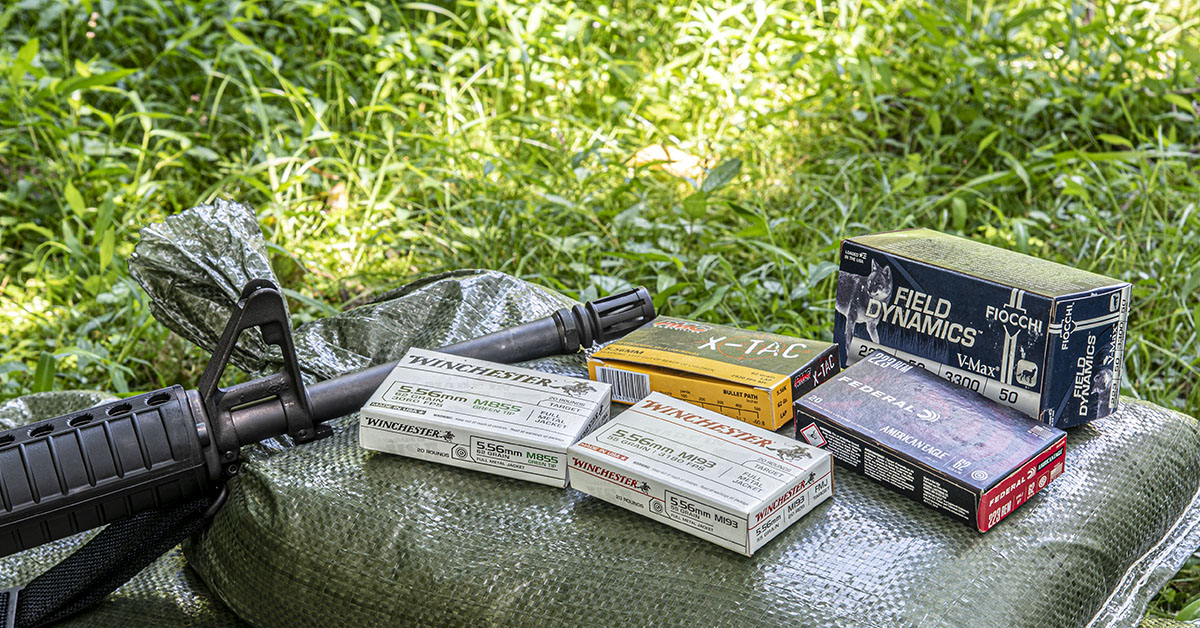 Considering both the cost and seemingly endless selection of AR ammo available, how do you choose what to use?

The U.S. military is aware of the accuracy influence ammunition can have on a given rifle. Unlike civilian manufacturers, they have complete control of the rifle and the ammunition that is used. Ammunition for military use is produced to a minimum accuracy standard that is intended to be met regardless of which rifle it is fired from. The Lake City Army Ammunition Plant located in Independence, Missouri, produces ammunition for the U.S. military. While this is a government facility, it is operated by a civilian contractor. 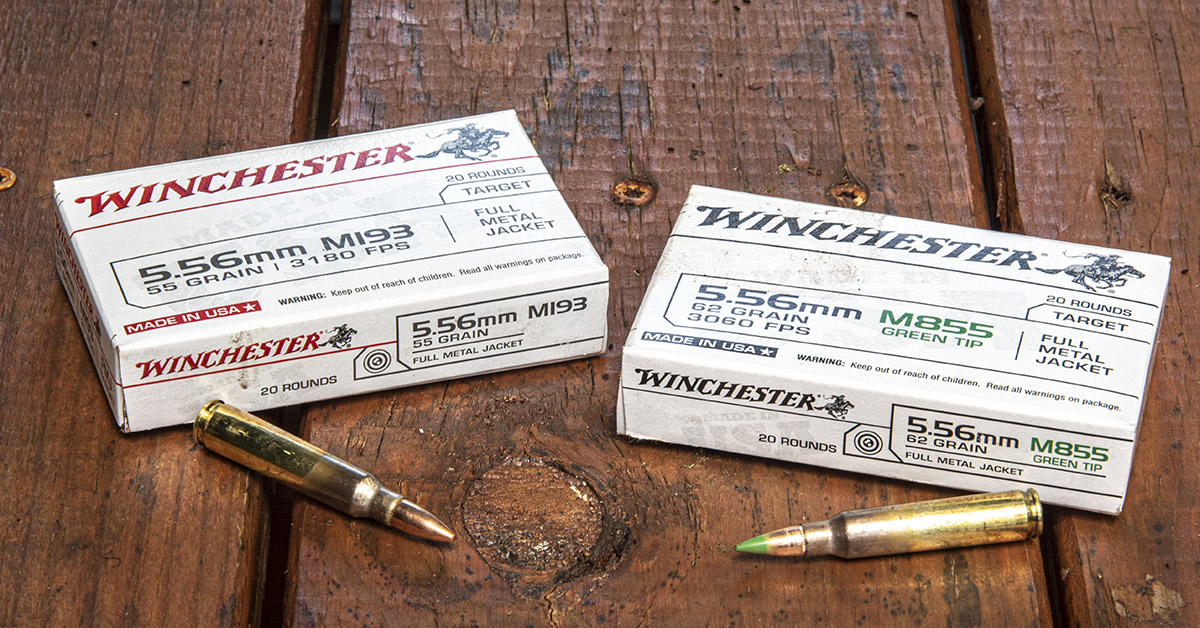 Currently, that contractor is Winchester. The good news for AR-15 owners is that government issue 5.56x45mm NATO ammunition is available on the civilian market and is sold under the Winchester brand as pictured above, often referred to as “white box.” 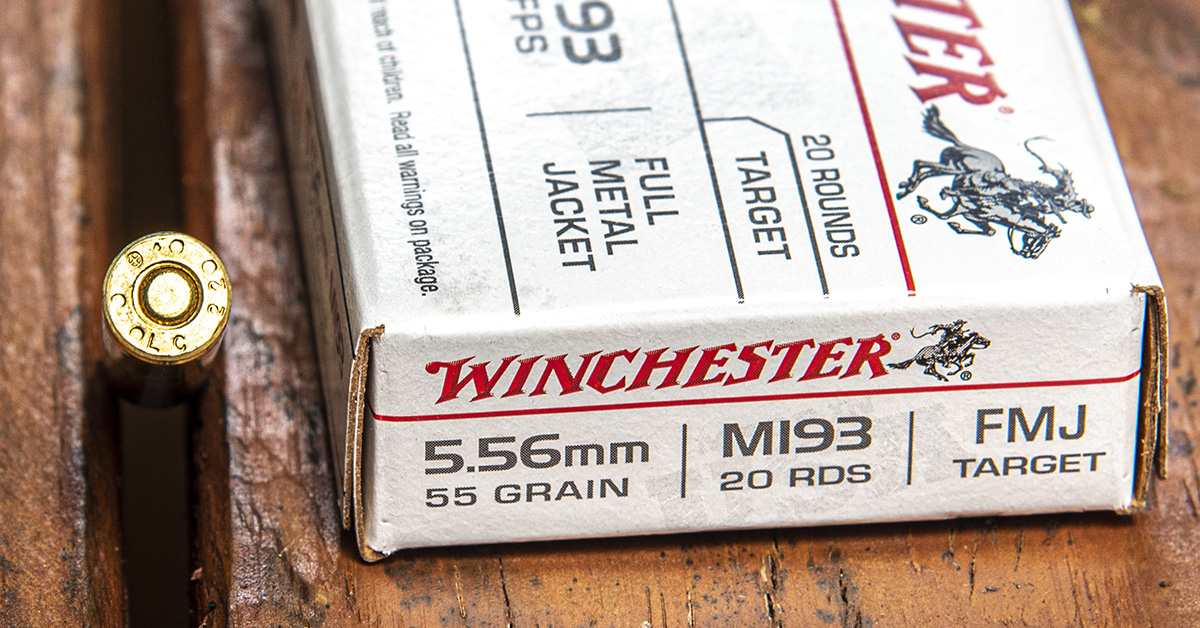 Close examination of the cartridge’s headstamp (LC) reveals that this ammunition was produced at the Lake City Army Ammunition Plant. The cross in a circle represents the NATO standard and the “22” is the last two digits of the year of production. The box is also appropriately marked with the military designations. In this case, M193. 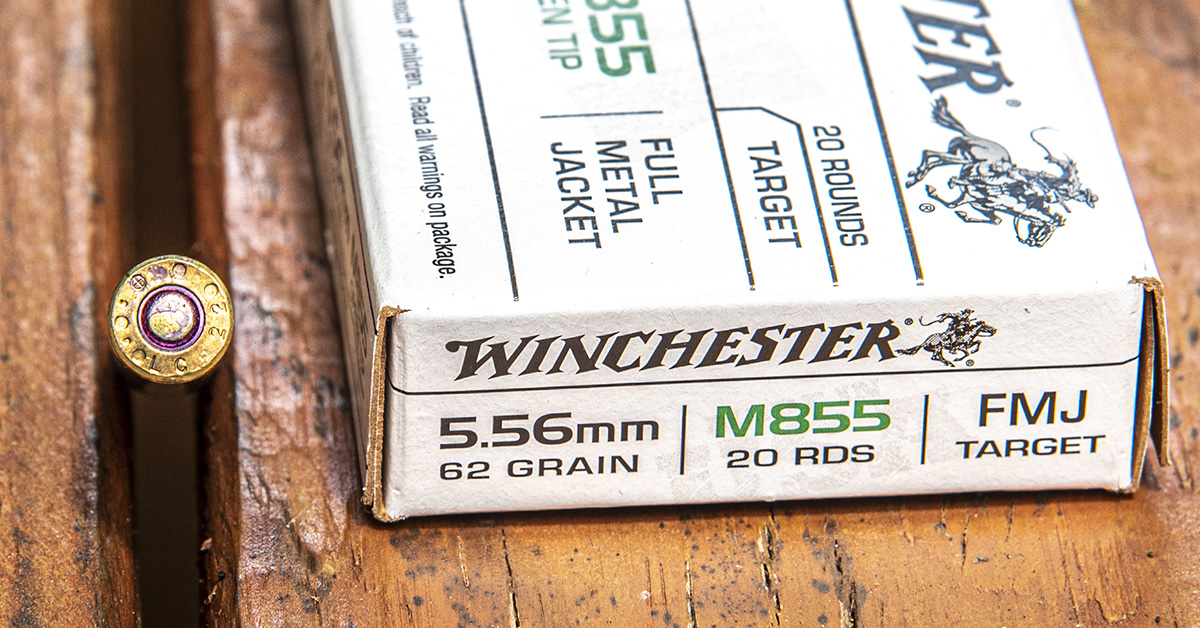 Also available is the M855 load, featuring the slightly heavier 62-grain bullet. As opposed to the traditional lead core and copper jacket construction of the M193 cartridge bullet, the M855 cartridge bullet features a third component — a hard tungsten core designed to increase penetration. It is NOT armor piercing. It simply provides increased penetration as compared to the M193 load’s 55-grain bullet. The M855 bullet tip is painted green to allow its continued identification once removed from the packaging. Military armor-piercing bullets are indicated by a black tip.

This gives you two different military issue rounds that can be effectively used in your AR-15. Both have worked fine throughout my military service and in my personal AR-15. I use each interchangeably, depending upon availability. Although my preference is for the 55-grain bullet since it tends to tumble upon contact with soft tissue, effectively accomplishing what an expanding bullet would accomplish but without the expansion. It has been my experience that the two-part construction of this bullet — a copper jacketed lead core — tends to be a little more accurate compared to the three-part, tungsten core, lead, copper jacket construction of the 62-grain bullet found in the M855 load. 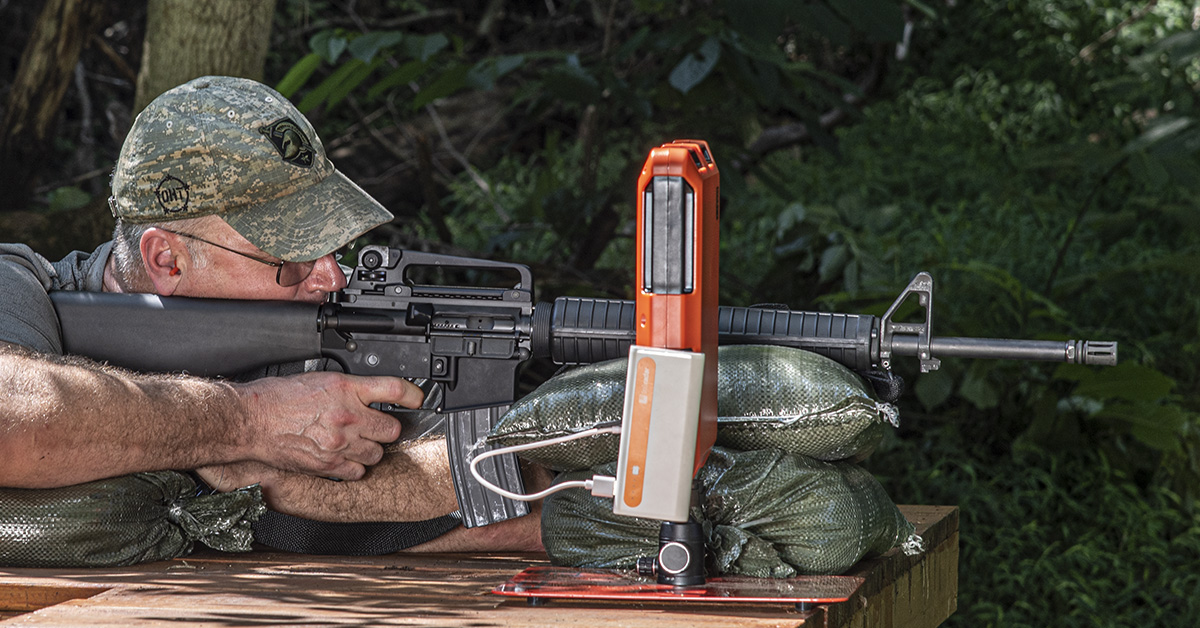 With the AR-15 being a direct descendant of the M16, it is reasonable to expect that when it comes to ammunition, what works well for the M16 would, in turn, work well for your AR-15. The only caveat to that is, unfortunately, not all AR-15s are produced to the same MILSPEC standard as the military M16, so results can vary.

With the availability of this ammunition on the civilian market and considering all the research and development the military has put into it, Lake City (Winchester) M193 or M855 is my first choice for target or defensive use AR-15 ammunition for ARs chambered in 5.56 NATO or .223 Wylde. Do some experiments of your own and you may come to the same conclusion.

Optics 411: Zeroing in on Rifle Scopes